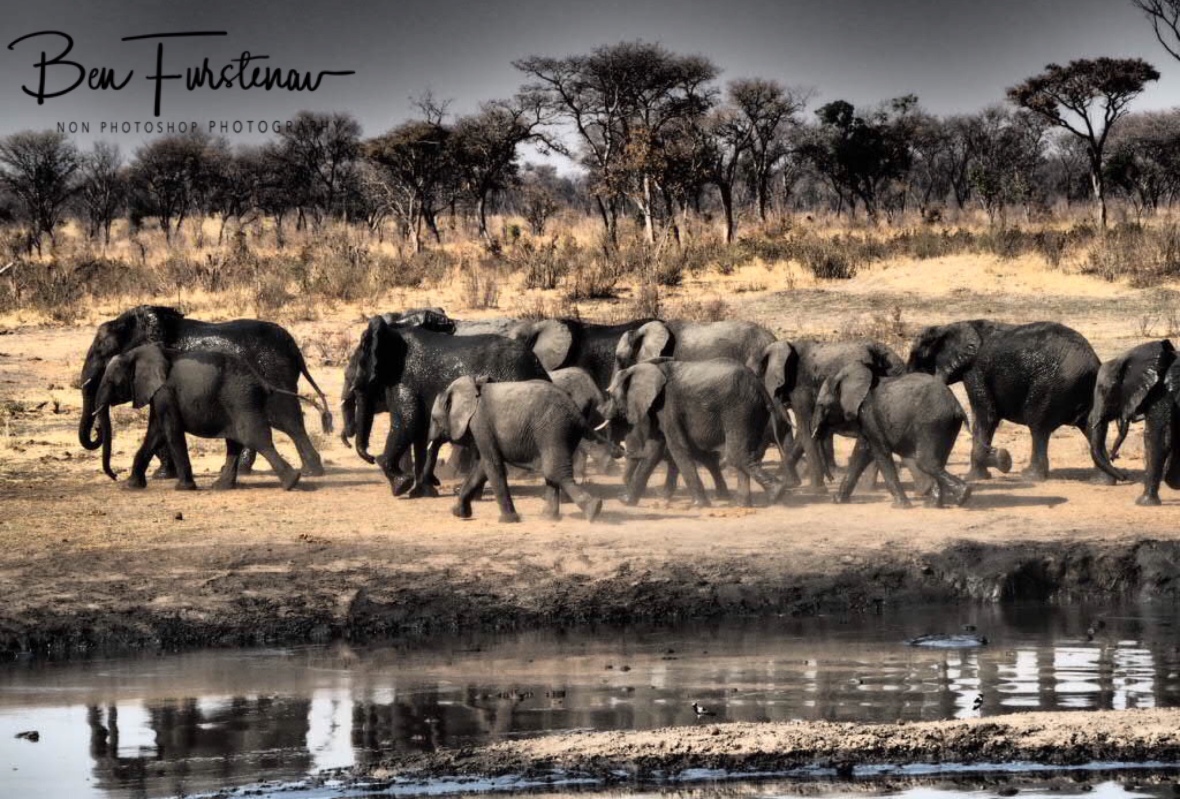 I was still busy taking photos when I noticed a white Landcruiser bakkie pulling up behind me. These were no tourists but Park Rangers. 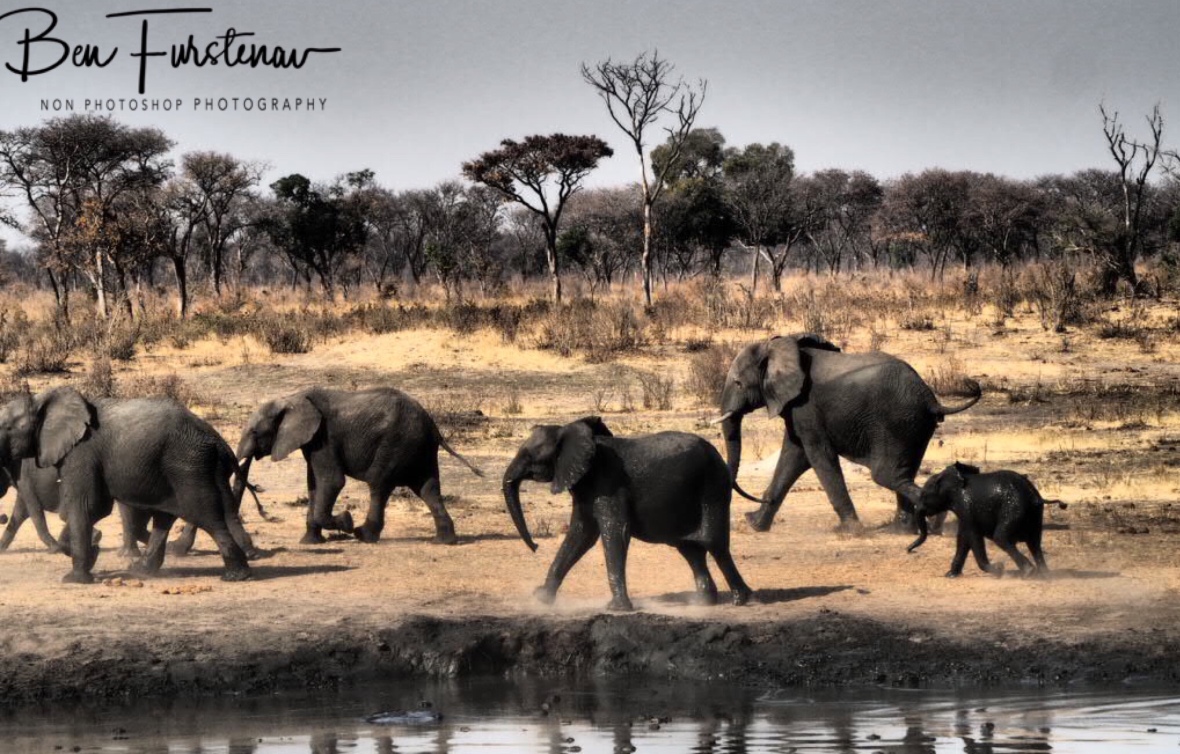 Still amazes me how scared these elephants of humans are, Khaudum National Park, Namibia

‘Have you taken some nice pictures?’ One of the Park Rangers asked. ‘Yes I have’ I replied. ‘I still am!’ At first, I thought they would ask me to return safely to the ground from the half-constructed viewing platform. Instead, he said ‘I am sorry, but we have to scare the elephants off. There is a calf in the spring, which we need to get out!’ ‘There’s a what?’  I can’t remember exactly what my reaction to his words was. An elephant stuck in the well? How come I didn’t notice? And where is mom?

Somewhat shocked, I was still hoping for the best and thought it was still alive. But then, all elephants I witnessed drinking from that well, seemed rather calm. ‘No, unfortunately, it is dead. It fell in some time yesterday and drowned. Mom finally had accepted its fate and moved on. Not too far I think. ‘Now we have to get it out somehow.’ Hearing these words sounded like a horror story in elephant paradise. I was deeply saddened to hear and then to see this 2-year-old elephant girl face first in the water with its bum sticking out. A tight fit, no room to move, it had no chance.

With so many elephants around the well at times, accidents or slip-ups can happen quickly. I found it strange that drinking elephants didn’t react earlier. Looking back on it,  my photo shoot tells a different story.

The unfortunate ones bum sticking out, Khaudum National Park, Namibia

The bum is clearly seen in some photos, I didn’t realize then.

One elephant kept staring at the unlucky one, Khaudum National Park, Namibia

Some elephants kept looking towards the body, I didn’t realize either.

On a few occasion, youngsters were held back. 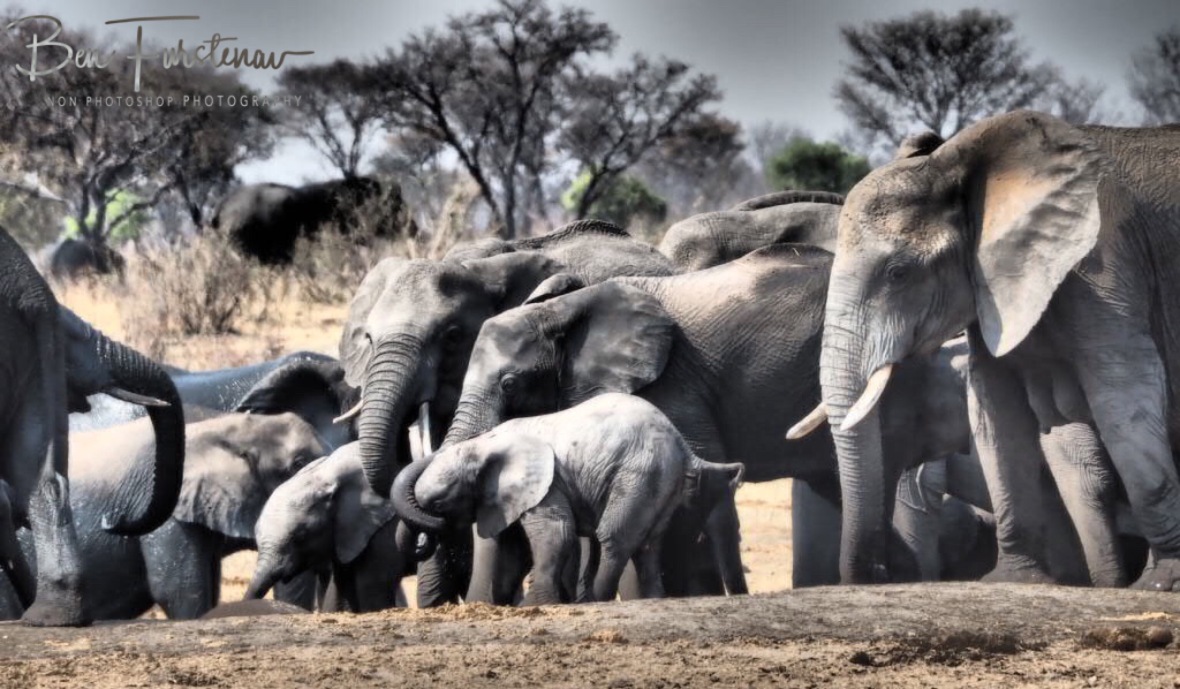 Out of safety or mental disturbance, reasons weren’t clear.

Even when other elephants arrived to drink, he wasn’t. 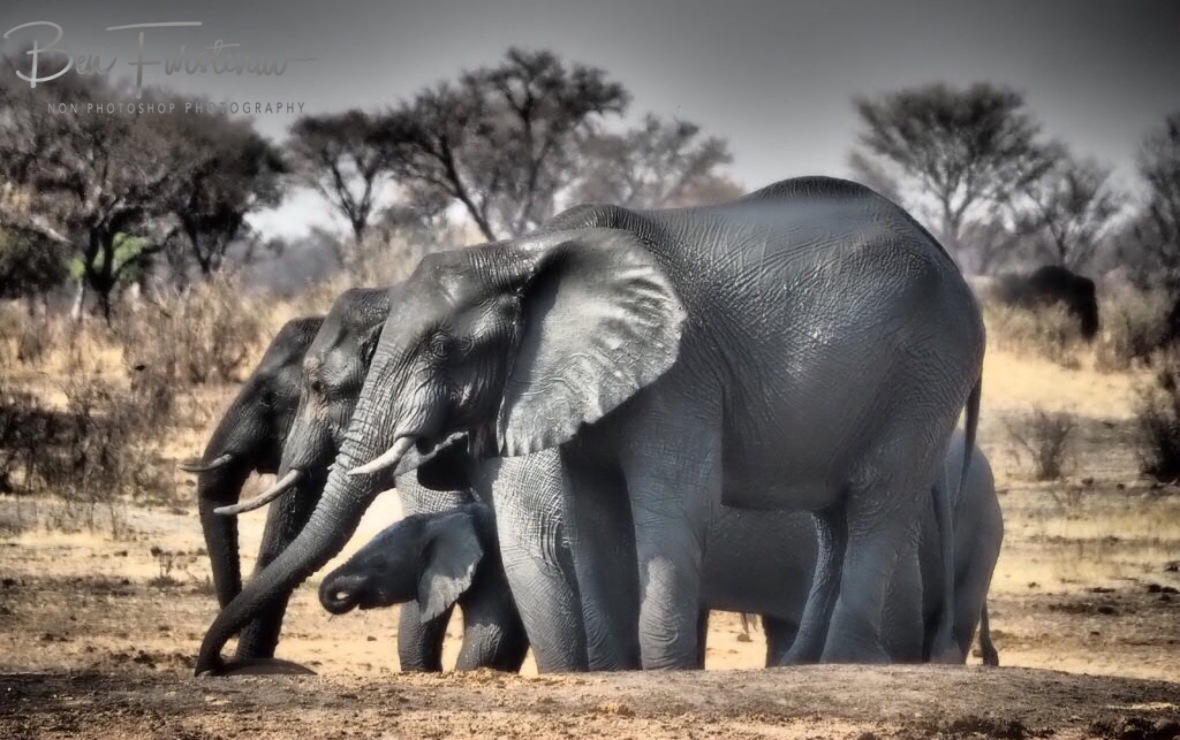 The others are drinking, Khaudum National Park, Namibia

He kept on touching and smelling the unfortunate one.

For at least 5 minutes, staring and touching this unfortunate young elephant. 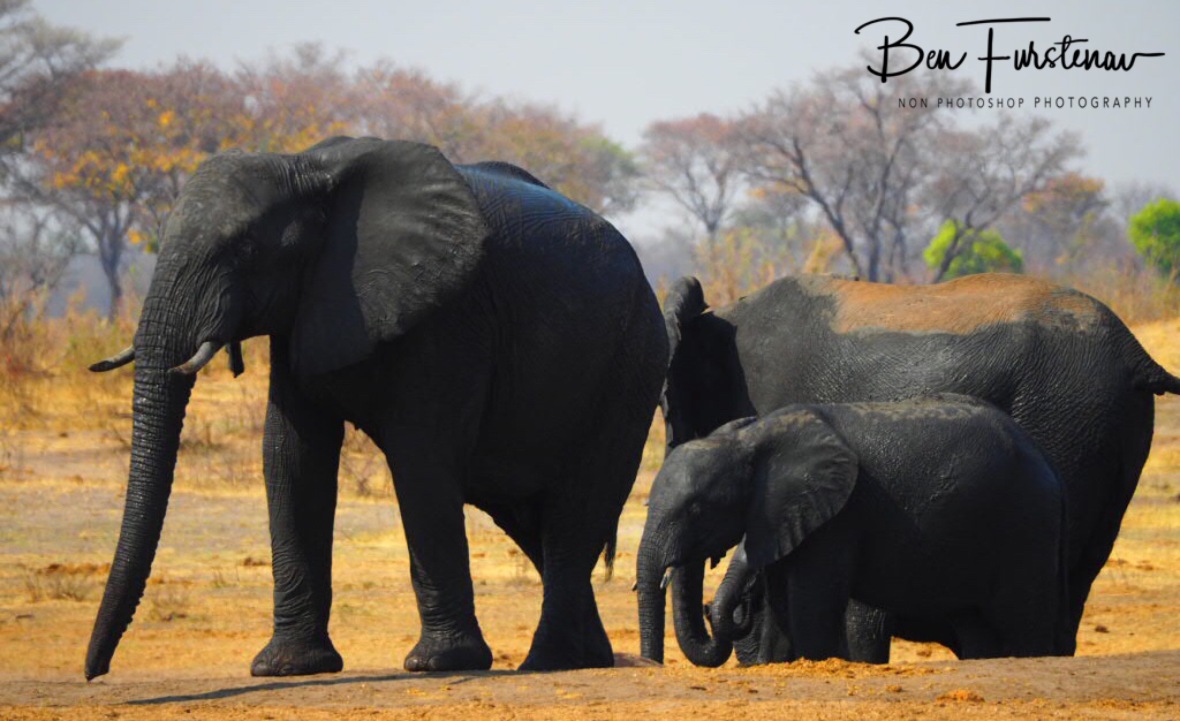 Before he eventually moved on. 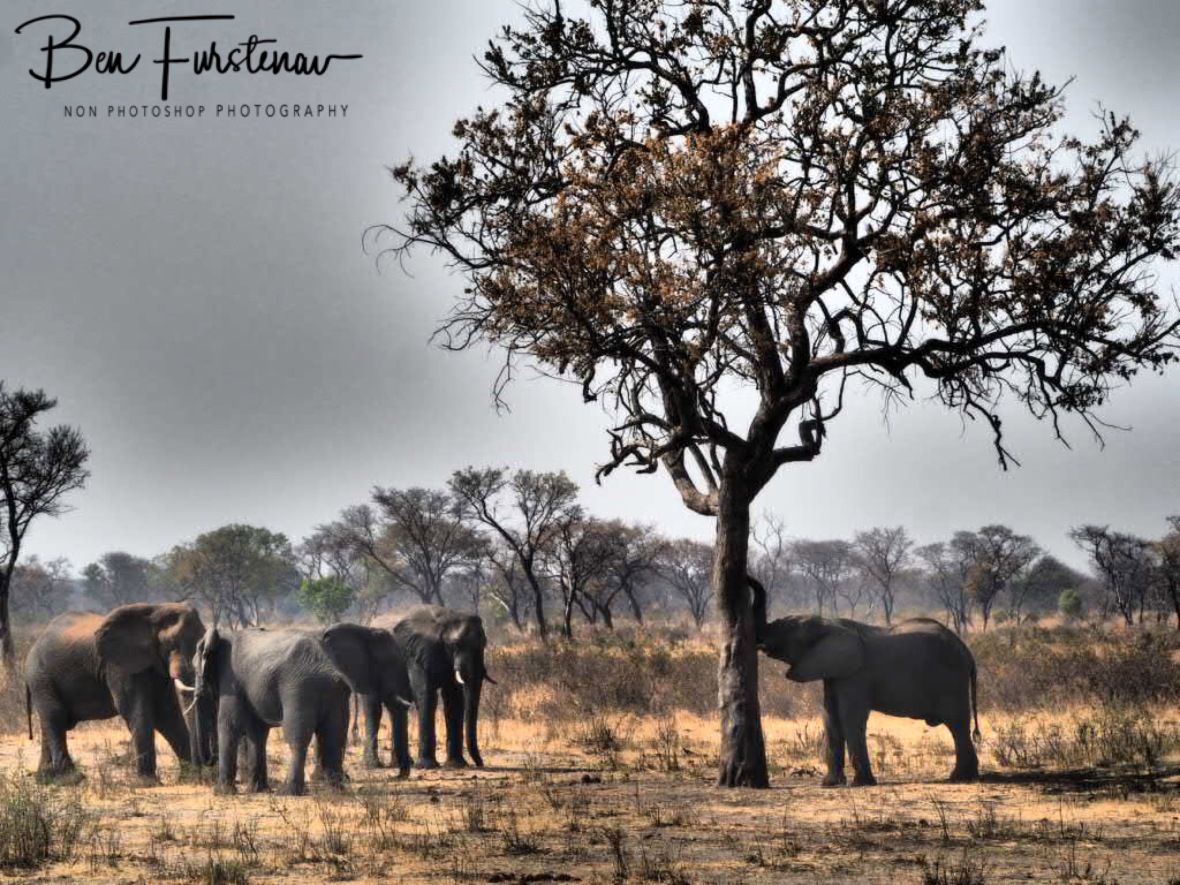 The photo says it all, Khaudum National Park, Namibia

At the time not being aware of the tragedy, I noticed this elephant leaning on this tree.

Holding on, others don’t know how to comfort, Khaudum National Park, Namibia

This might not be an unusual behaviour, but the way it lifted the trunk up high, literally holding and leaning on to it, makes perfect sense now.

The problem the Rangers were faced was obvious. The unfortunate one needs to come out. If it is left in the well longer, it would contaminate the whole well. Predators and scavengers would be attracted sooner or later, making this a dangerous mission as well as causing a lot of tension around this well in between animals. The technical issue was that there was no holding point to drag it out. Like a tight fit balloon, there was nowhere to wrap the rope around.

And the wardens didn’t have a winch. Zimba does. This put a little smile on the Rangers faces, making this task a little bit easier. To use it for an occasion like this, I would have never imagined. But they were happy to accept our help.

We eventually lifted the dead body up for ropes to be attached around a leg, before it was then dragged out. Seeing this little elephant being dragged away by the rangers was a moving moment. Having seen these joyful and calm giants interact over the past 5 months came through my tearful mind. Life is tough in the desert. One split moment not paying attention can be fatal. To drown in the Kalahari desert is unfortunate, to say the least.

‘We have a thank you present for you!’ One of the Park Rangers said after their return. ‘I was happy to help, even though it was hard to comprehend’ I replied. I don’t need a present, thank you’. ‘When we dropped the dead body off in the bush, we noticed two healthy and hungry male lions nearby. They were very interested in the dead elephant. We thought you might want to have a look?’ the Rangers said. Ah, that kinda present?

Even though still feeling mildly emotional, the off chance seeing two male lions could not be missed. Not only one, but two black-maned Kalahari Desert lions. Yes, please. I followed the Landcruiser a good mile east via a rangers track before we stopped at a fairly cleared sandy area with only a few bushes around. Perfect. The lions ran off at our arrival and looked at us and the elephant from a thick bush. The Rangers had to move on and left with the words ‘Be careful, but take some nice photos’. I put my thumb up in the air as I was just too busy wondering if and when the lions would return. The unfortunate elephant laid head facing my direction. A sad view. Knowing that these two lion kings would make a meal out off this one didn’t comfort me much.

The older and bigger lion came back for an elephant-sized meal. It must have been torture looking at dinner and not getting to it. 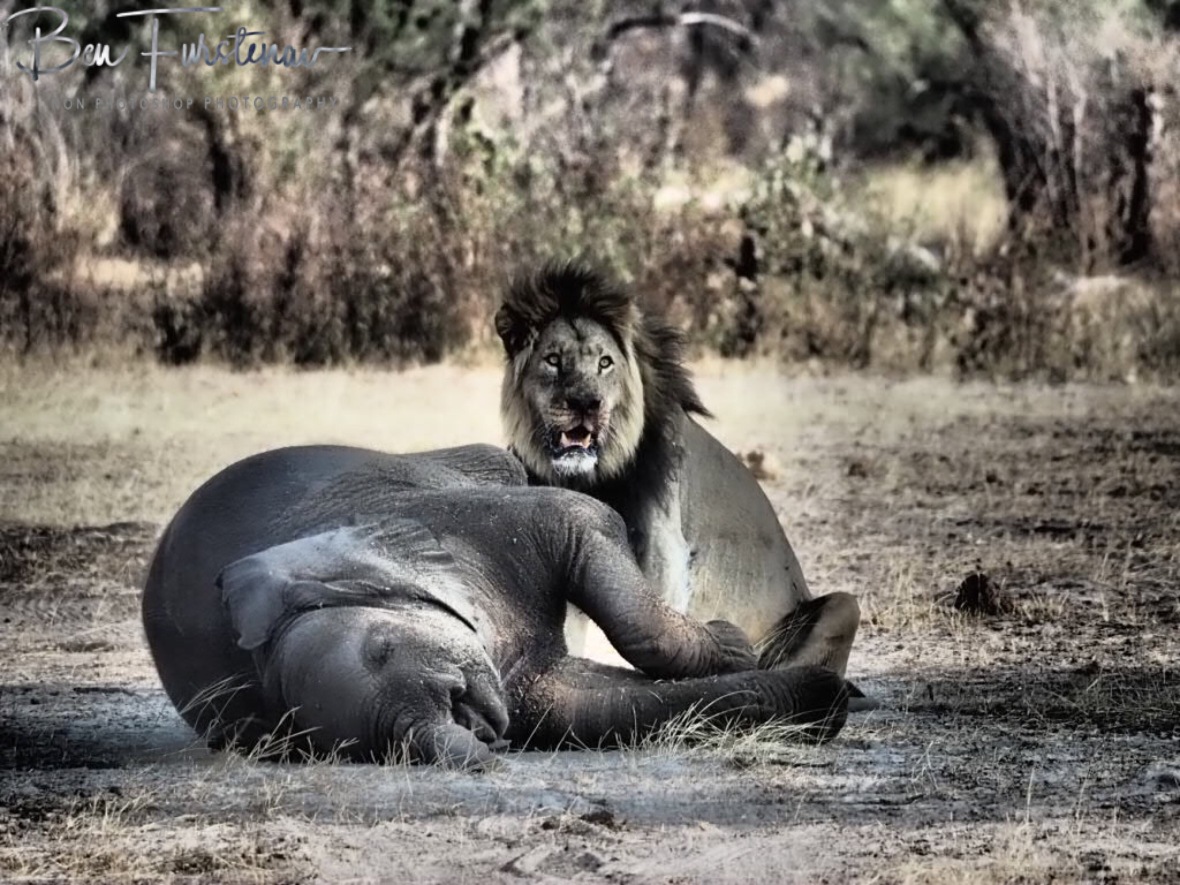 He sat behind the elephant first and secured the area.

The king of the Kalahari Desert, Khaudum National Park, Namibia

He then laid behind the unfortunate one, 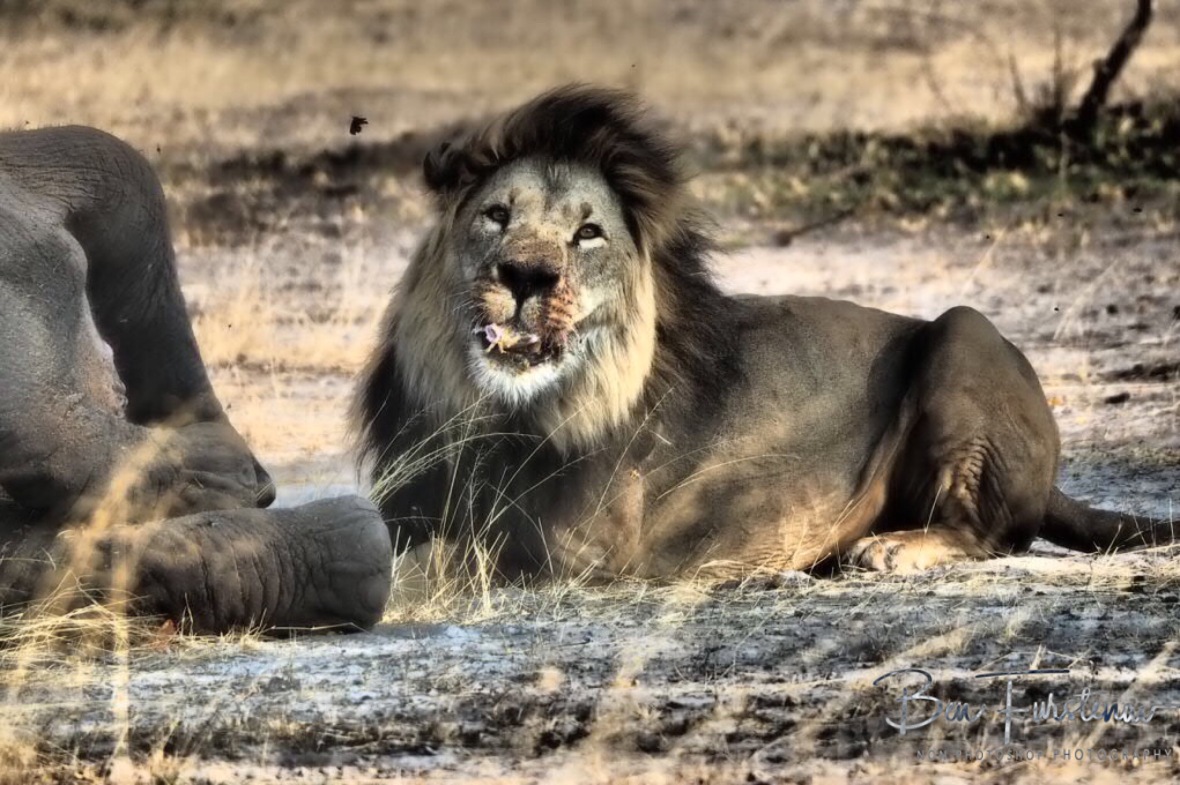 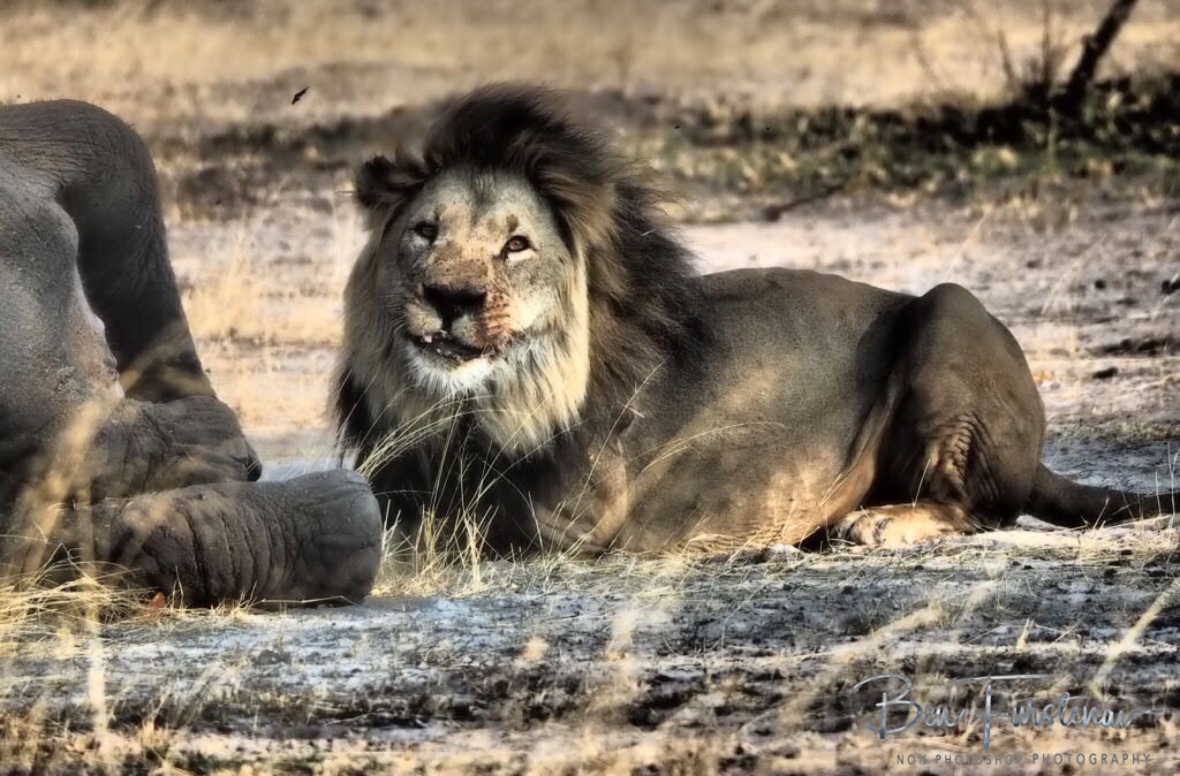 Elephant skin is very tough and I was wondering how the lion would proceed from there.

Looking for another opening in the carcass, Khaudum National Park, Namibia

He did circle the carcass, possibly hoping for a gash on the elephant’s body. That was not the case, so he continued where he started from. He sure enjoyed his dinner though.

Something scared him off, as he was standing sideways to the elephant. 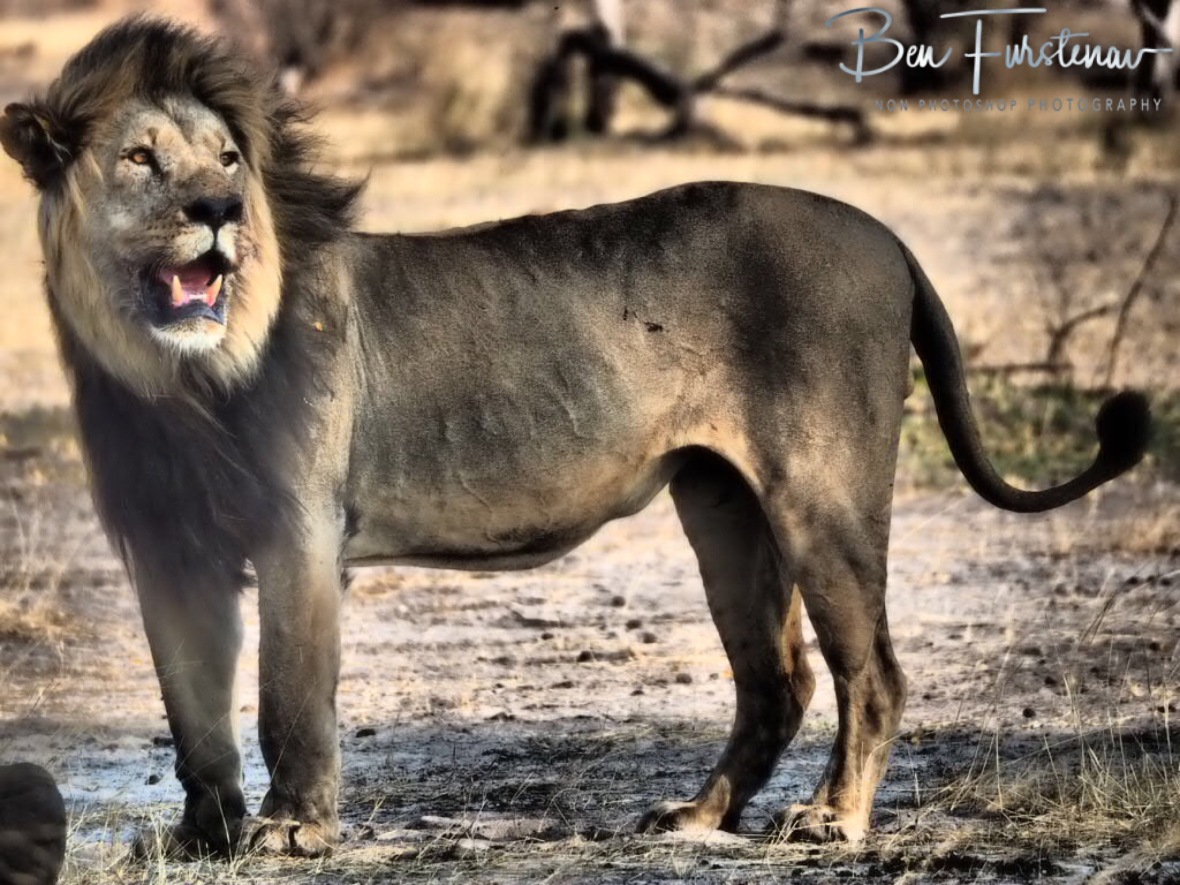 This was a perfect opportunity for a perfect photo.

Or two. I then noticed that he was wearing a collar to keep track of his movements. He has been manhandled before, which explains the respect he gave us when he ran off.

Not sure what to make of us, Khaudum National Park, Namibia

A somewhat comforting sign. He is a big boy, a lion king in his full pride. Wow, after a slow day, I didn’t think that would happen. Not only is he a proud lion, but he is only 20 meters away from me and feasting on an elephant.

He is strong but seeing his rib cage clearly indicated he hadn’t eaten for some time.

Coming out of the dark, Khaudum National Park, Namibia

The other lion king, most likely his brother, eventually came out of the bushes. 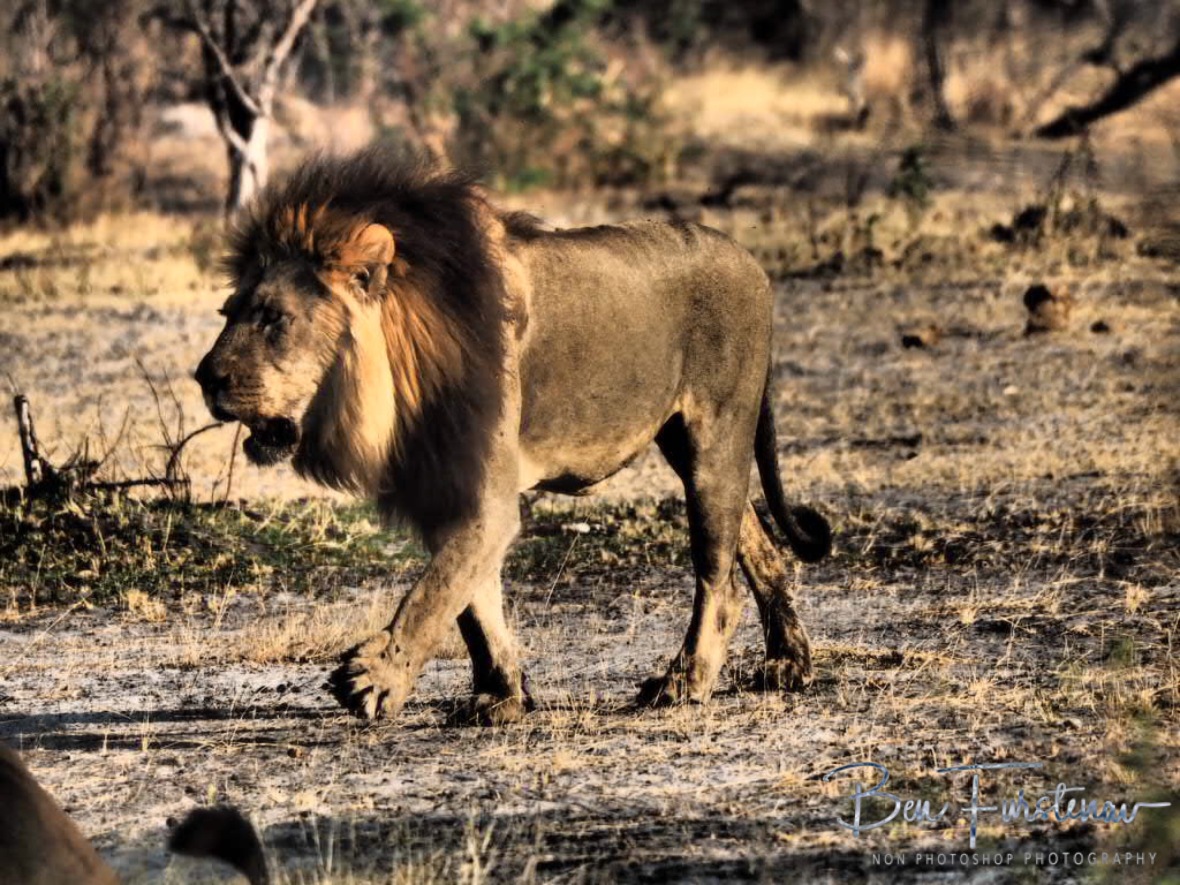 He couldn’t wait and watch anymore. 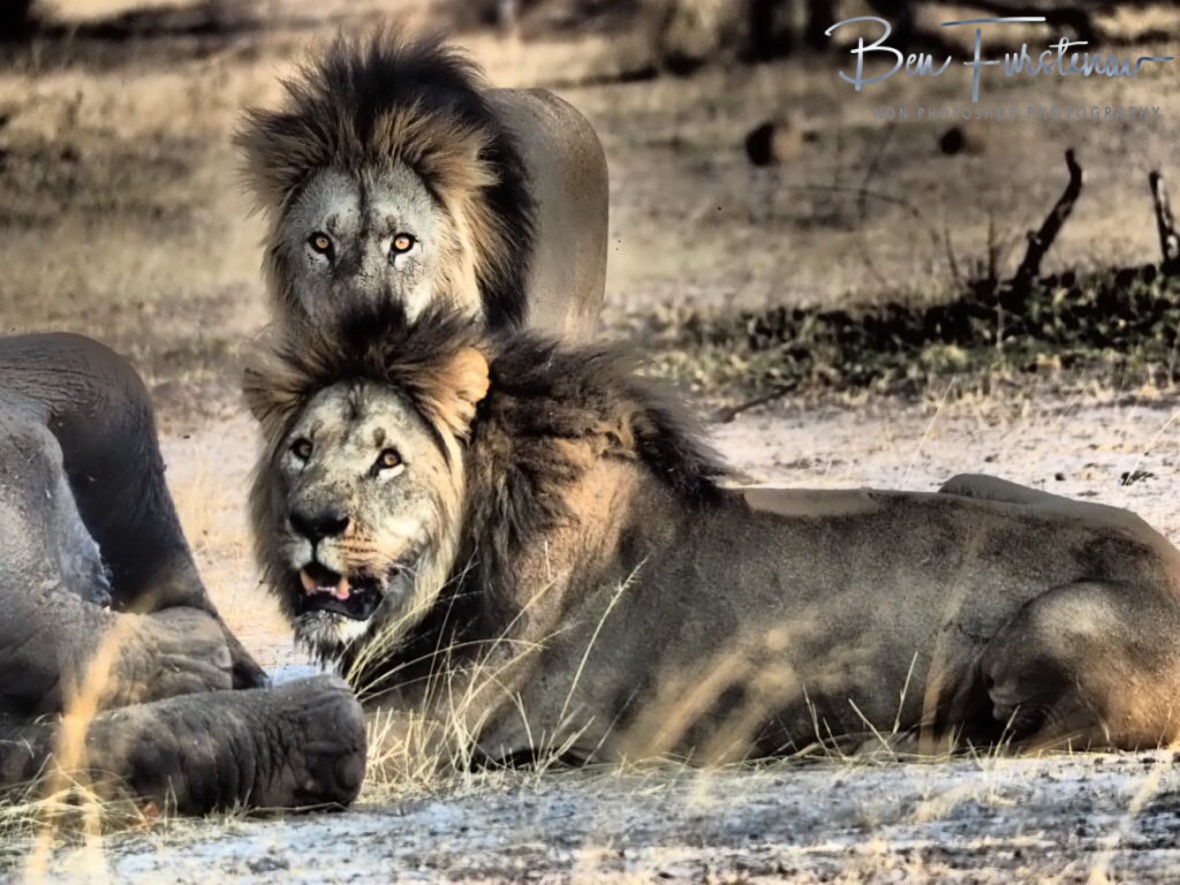 He somewhat carefully walked towards his brother and joined him for a feast. 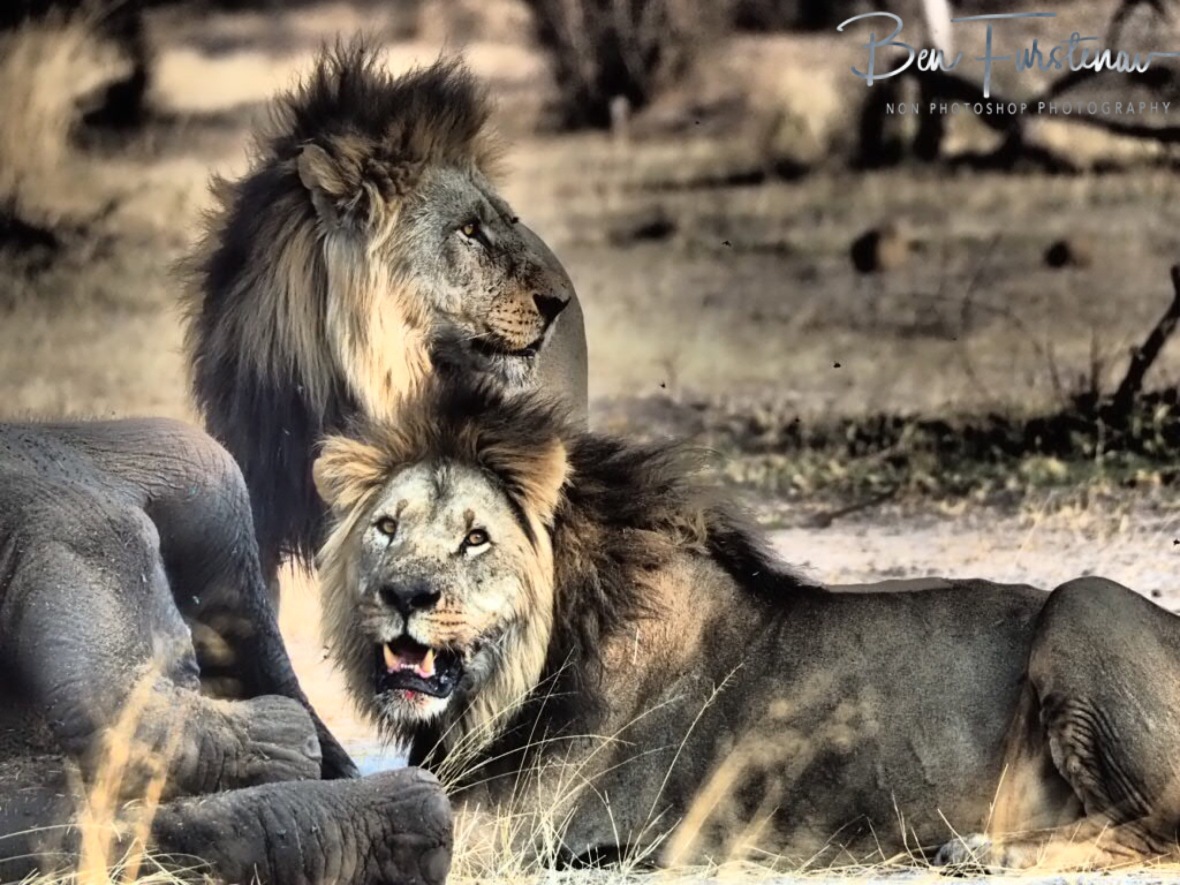 He had a good look around too, it is important to know what is around you here in the desert.

Keeping a good eye out whilst having dinner, Khaudum National Park, Namibia

They both started feasting but always keeping a good eye on my actions.

Lions have a strict rank and eating order. Seeing them both together eating next to each other meant that they were both equally respected. No fighting or growling, just eating. 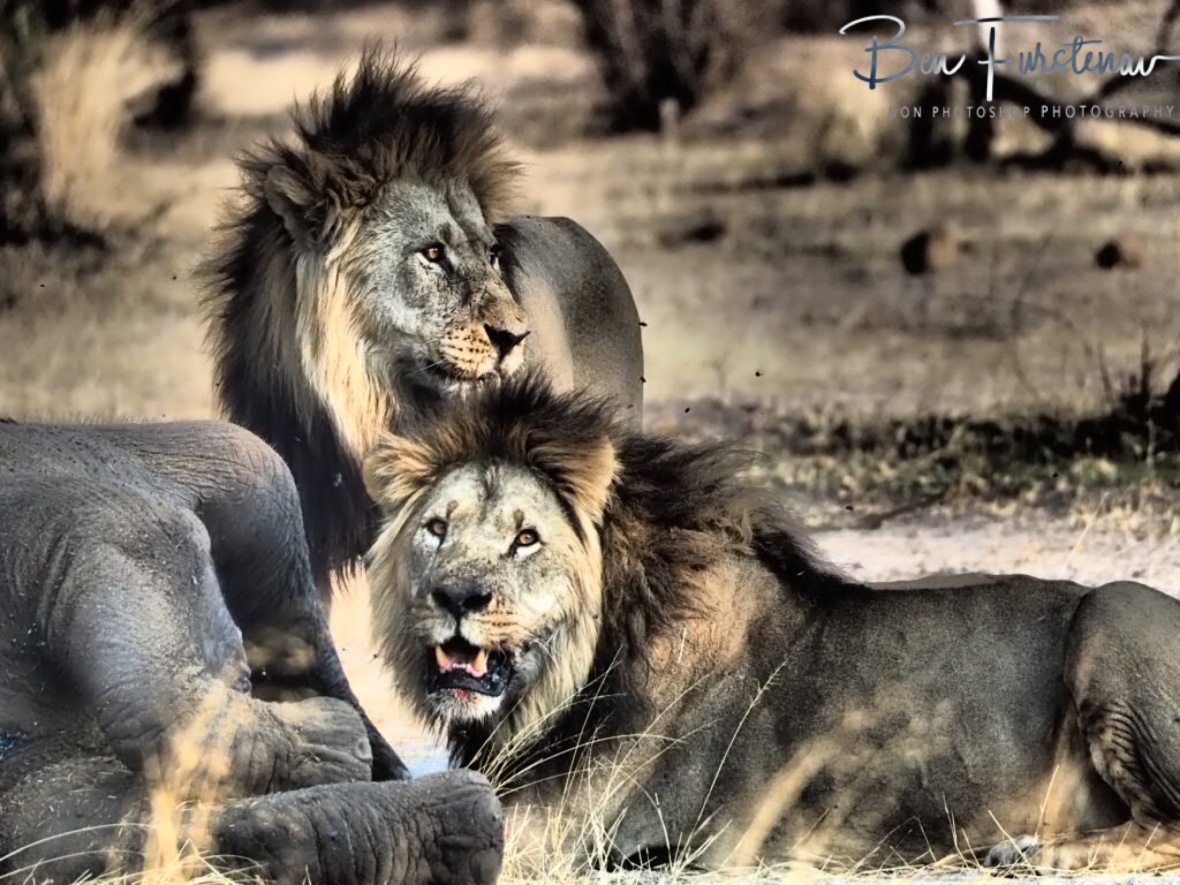 There is no doubt that they are two ‘Kings of the Kalahari’.

I best leave them to it and drove off into the sunset with this images stuck in my head. ‘Live, and let live’! This is the rule out here. 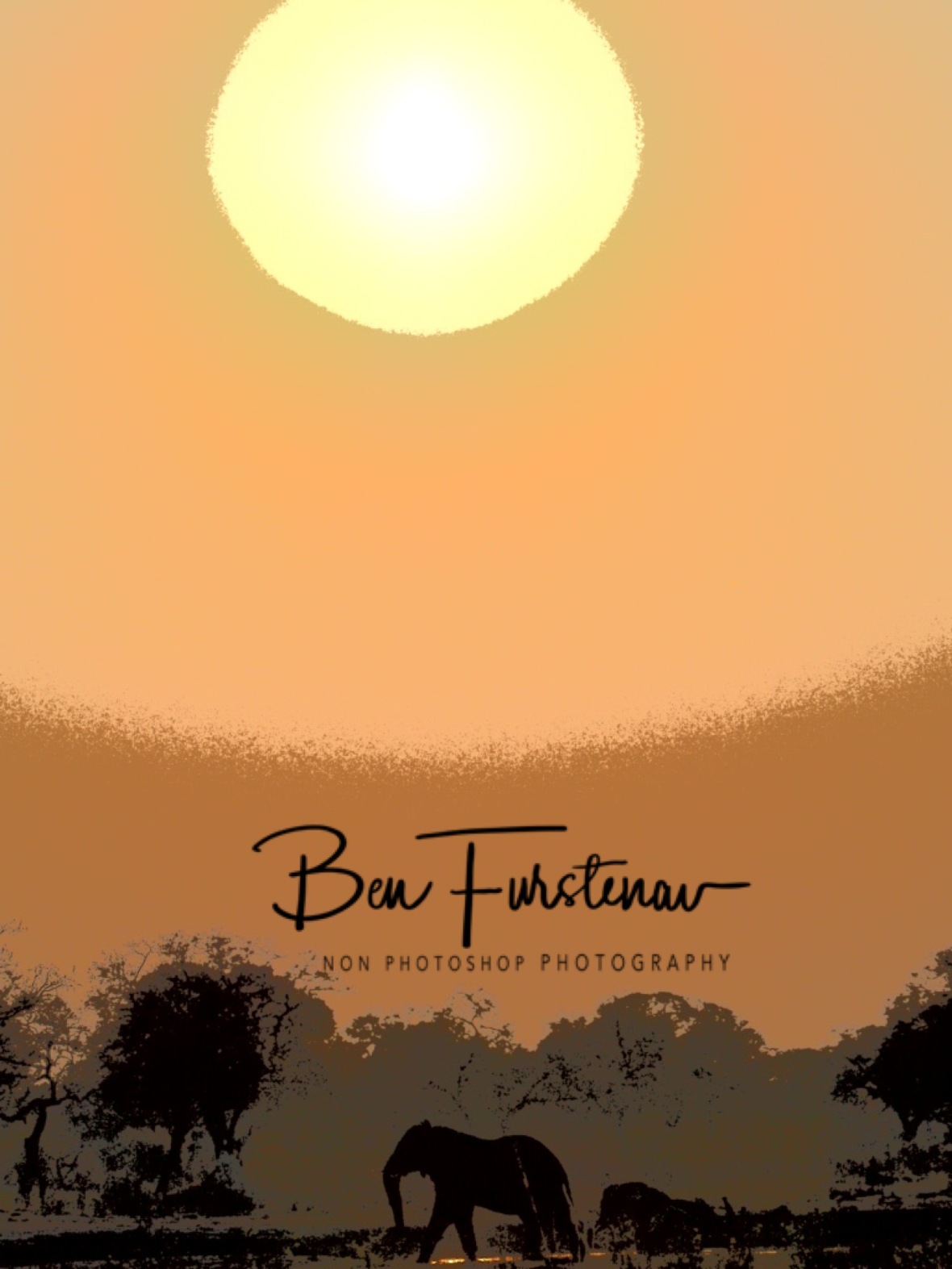 Some elephants returned to the waterhole, most of the rest were out on the grassy plains. The herd of the unfortunate one stood still in disbelief. So was I. Those images still stuck in my head.

The sunset over the ‘False Mopane’ Forrest in Kalahari desert was spectacular.

Crossing the Khaudum Riverbed, I saw a black feather with two white spots on it. It looked pretty but something held me back to add it to my feather collection around ‘Little Zimba’s’ neck. Who believes in bad luck? I mean, every time I saw a small cat early mornings, I witnessed an impressive lion display.

Leave a Reply to Travels with Ben Cancel reply