Early morning start for another sunny and calm day. Loading Zimba, after having another great coffee and chat with Ammo and friends, it was time to set off again. Great start to the day.

‘Tsitsikamma National  Park’ ranges all along the garden route in different sections. At the Storm River mouth was a camping spot,with plenty of hiking trails thru bush and along the coast. Wild otters habitat this area and it sounded like a great place to stay for a night or two. Driving through the National Park entrance gate, I parked my car and informed myself about camping. What it came down to is, that it would have cost me about 500 Rand, about 30 Euro to camp per night, including entrance fee? This is ridiculously expensive to park your car without showers and camp kitchen. I asked if breakfast in bed was included? This was the tourist price, about triple from South African resident fee. Anyhow, I turned around and headed in to Wilderness.

The small town of Wilderness is nestled on the beach, surrounded by the foothills of lush mountains and forest, creeks and a lagoon. In very early days when mankind was still using ox wagons, crossing the the Swart river and the Kaimanns river, which merge not far from shore coming from two seperate ‘Kloofs’, was literally impossible, and therefore called wilderness. I got lost in Wilderness too.

No, I didn’t go for a hike, but it really was a groovy, chilled, a little hippy alternative vibe at ‘Fairy Knowes’ backpackers, as the name gives away. 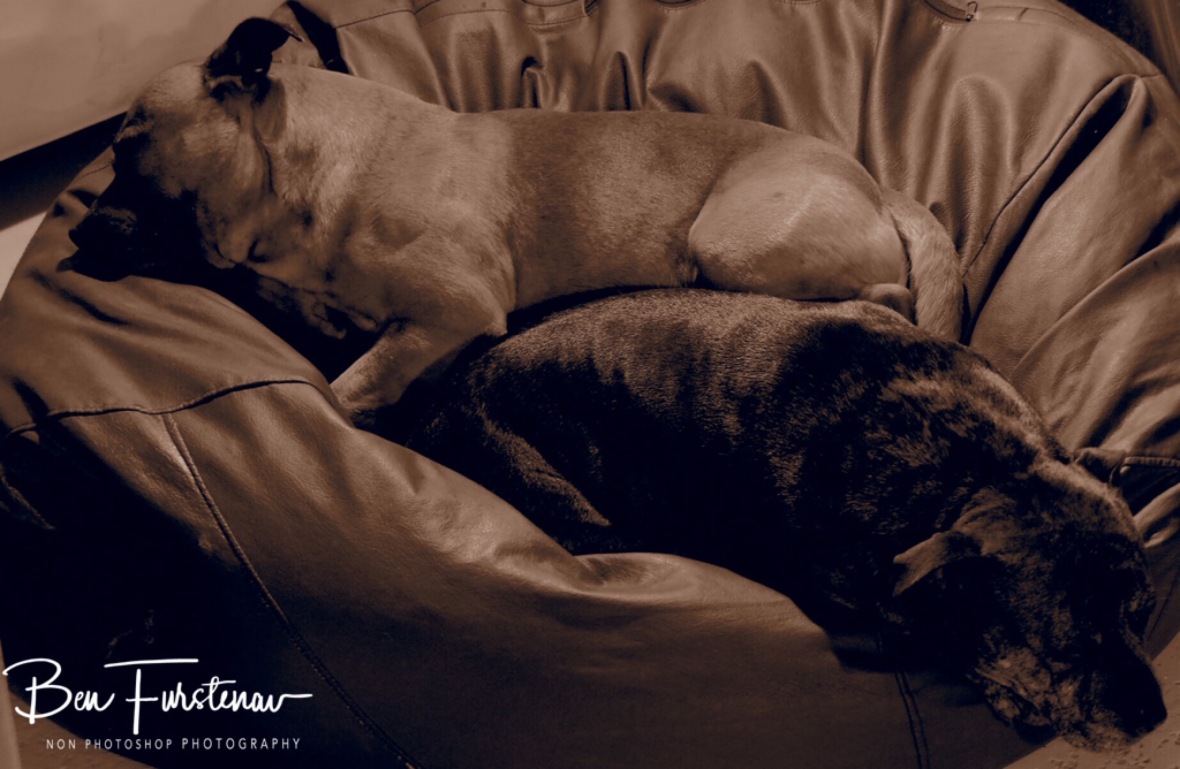 Lots of space to camp, very friendly and helpful staff, 2 very placid pitbull dogs and a roaming, spotless, white cat, which came in to the bar for a bowl of milk every night. 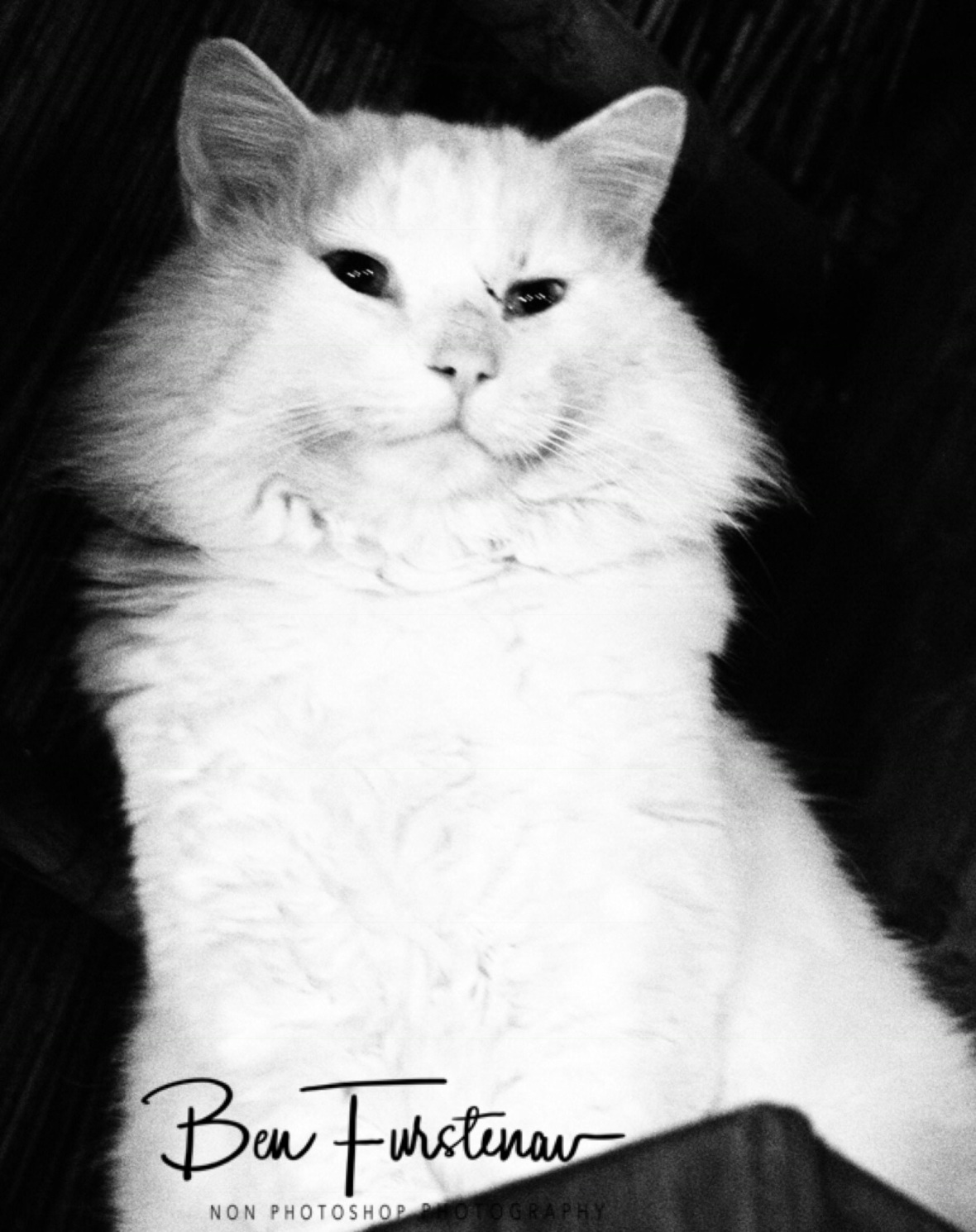 Lots of locals came there too and mixed with a young backpacking scene, an ideal place to mingle. I stayed an unplanned 3 nights, as pool, beer and tequilas kept conversations going and Didi behind the bar busy.

The kingfisher hiking trail was leading from the backpackers, up the hill towards a waterfall, part of the National Park. I was again amazed on the pricing for an easy 5 km return stroll; 120 Rand for none SA residents. Who does the calculations for these prices? It really seems to be a ‘rip of the tourist’ system, which I can’t understand.

Next day I went on a ‘Canyoning’ adventure tour. A few Belgians recommended it from their experience, as one abseils in to a gorge and then follow, meaning floating, the river, jumping off cliffs into the next gorge. My new Dutch friend Gido asked me to join, so I did. The 70m abseil sure was adrenaline pumping and we were looking forward to jumping off cliffs, and canyoning to our next jump. Well, we floated a hundred metres, passing a cold waterfall, and that was it?!?

The Belgians did a different gorge yesterday.? They could have just written abseiling on the blackboard though. That didn’t dampen the spirit for spirits for us and some more pool action with fellow Dutch, Lizette and Lisa, and another couple from Holland. Another late night, full off laughter and fun. 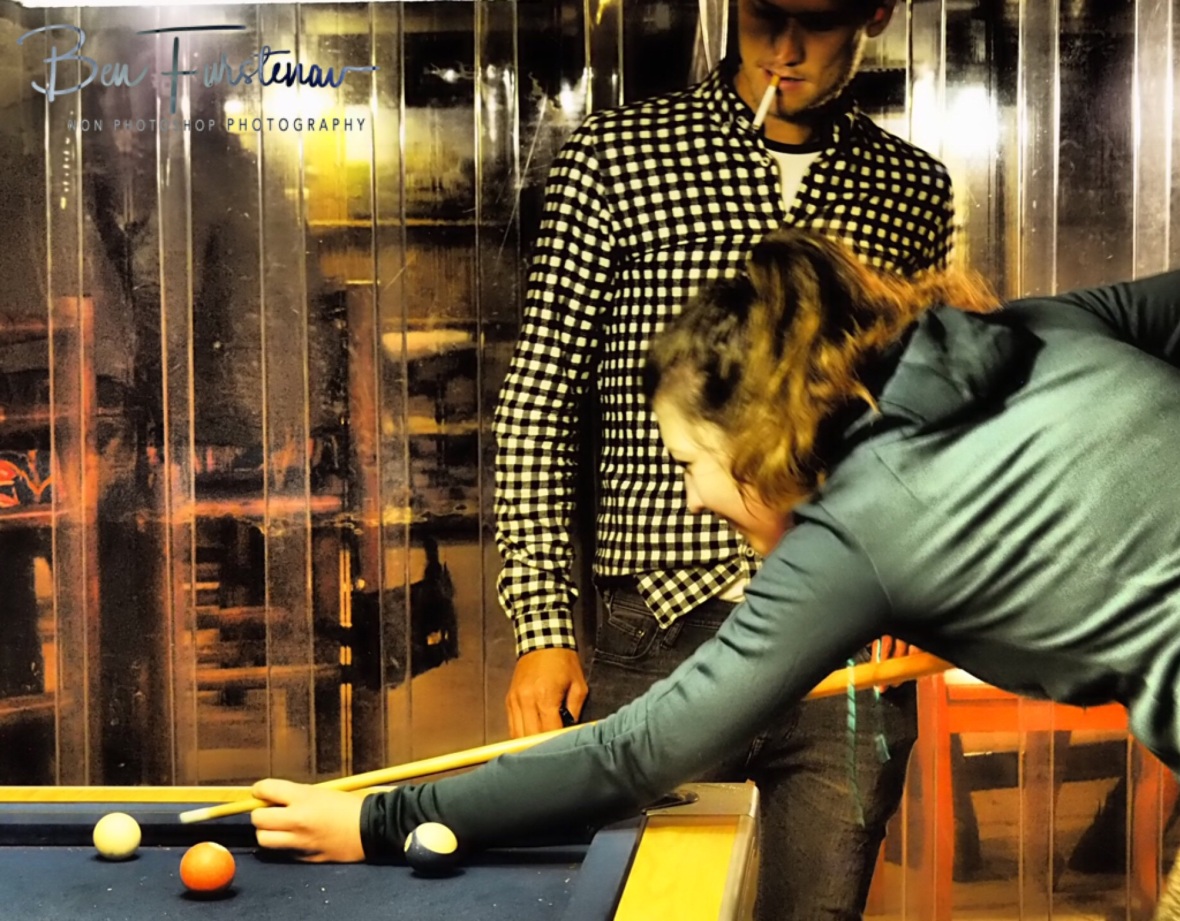 A fun game of pool

I didn’t feel all that flash next morning and packed up Zimba, itching for some action. After saying my goodbyes to new friends, I followed the garden route towards Cape Town.

I personally would call it the pine tree route. Lots and lots of native forest had been destroyed, to plant non-native pine trees for logging reasons. I was actually a bit shocked on how many pine trees of all sizes had been planted, or just been cut down. Money talks, as always. 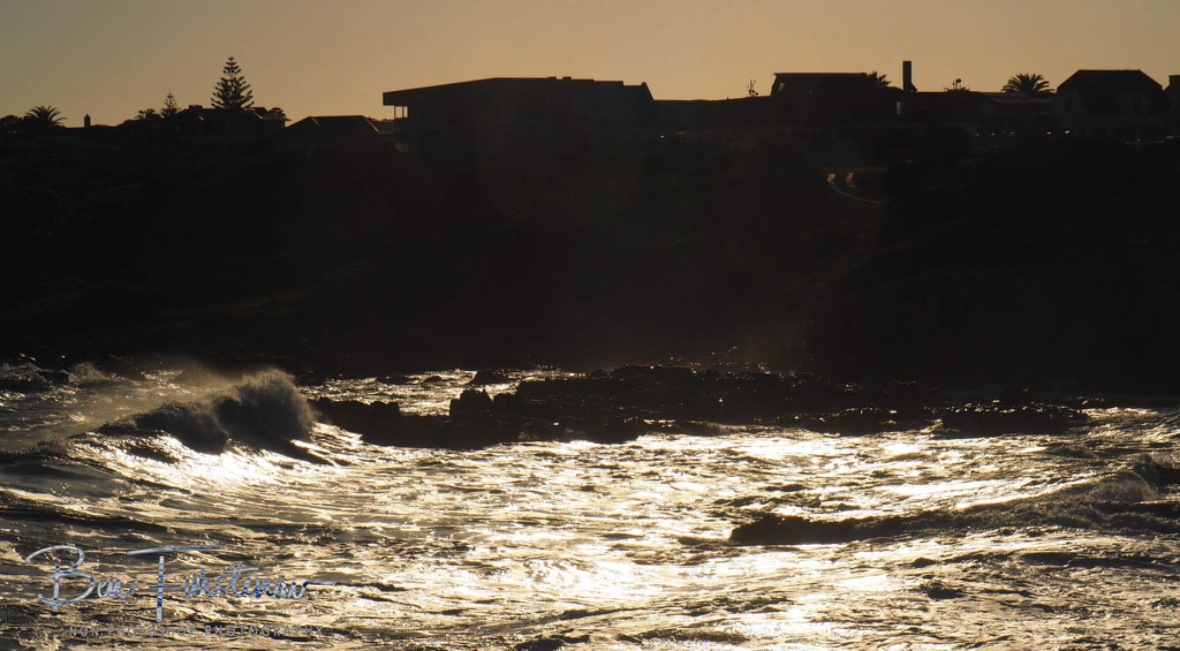 I left the N 2,and followed the signs to Hermanus, a small coastal town, well known for whale watching and diving with great white sharks in cages. An impressive coastline with rolling hills as a backdrop, doted with spotless houses catered for tourists, which there are plenty of. 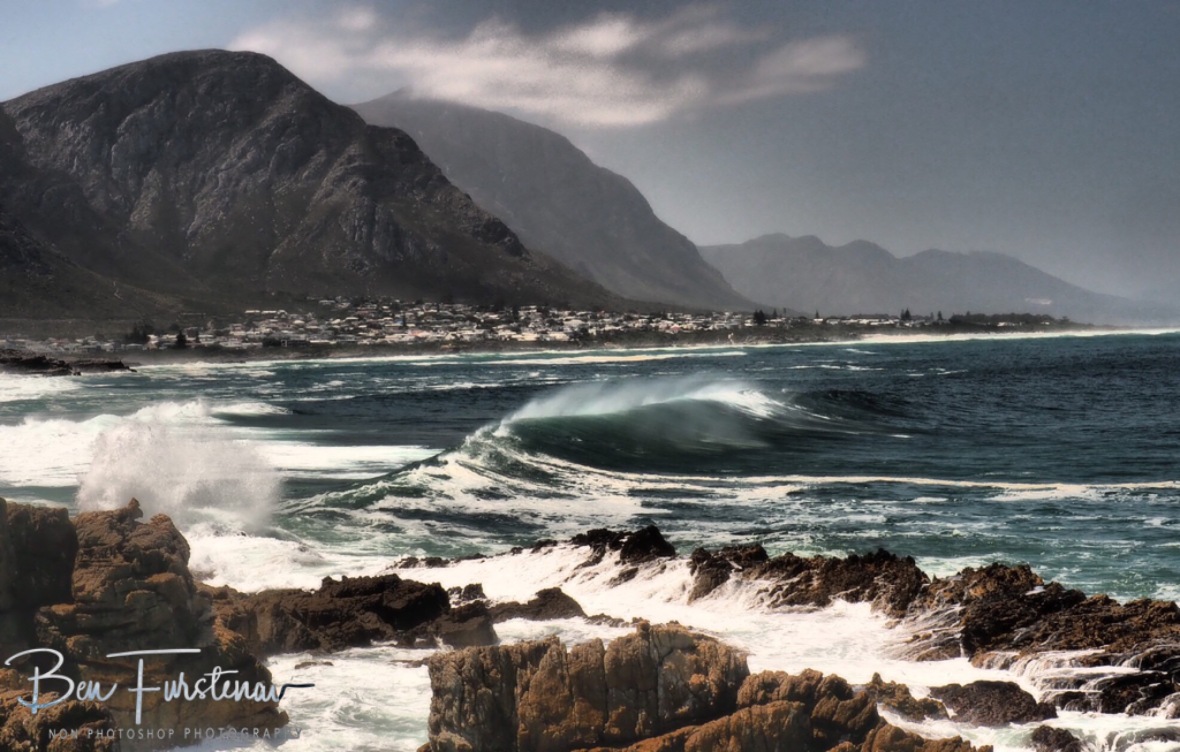 Walking along the coastline, the swell was pumping,the sun was setting, and the whales were jumping. No matter how often you see it, a gentle giant leaping out of the water, thumping with a huge splash, is just priceless. 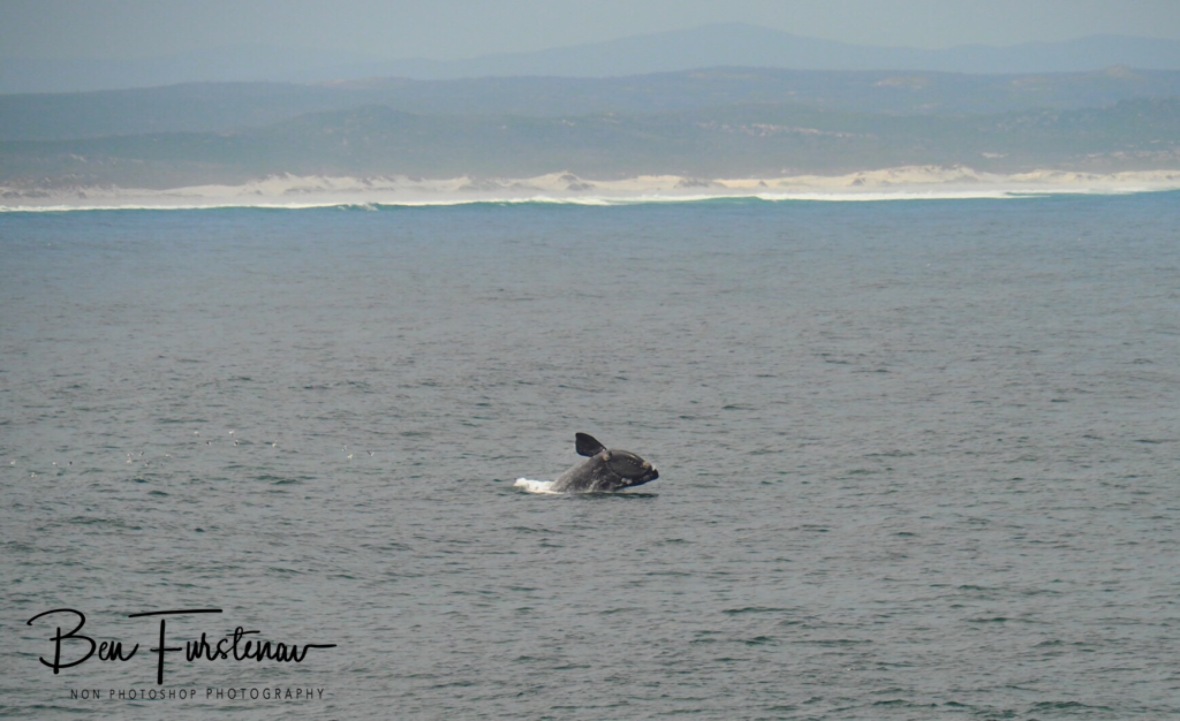 Some Rock Hyrax occupied the rocky beachfront as their habitat, preying on tourists to feed them. Rather cute. 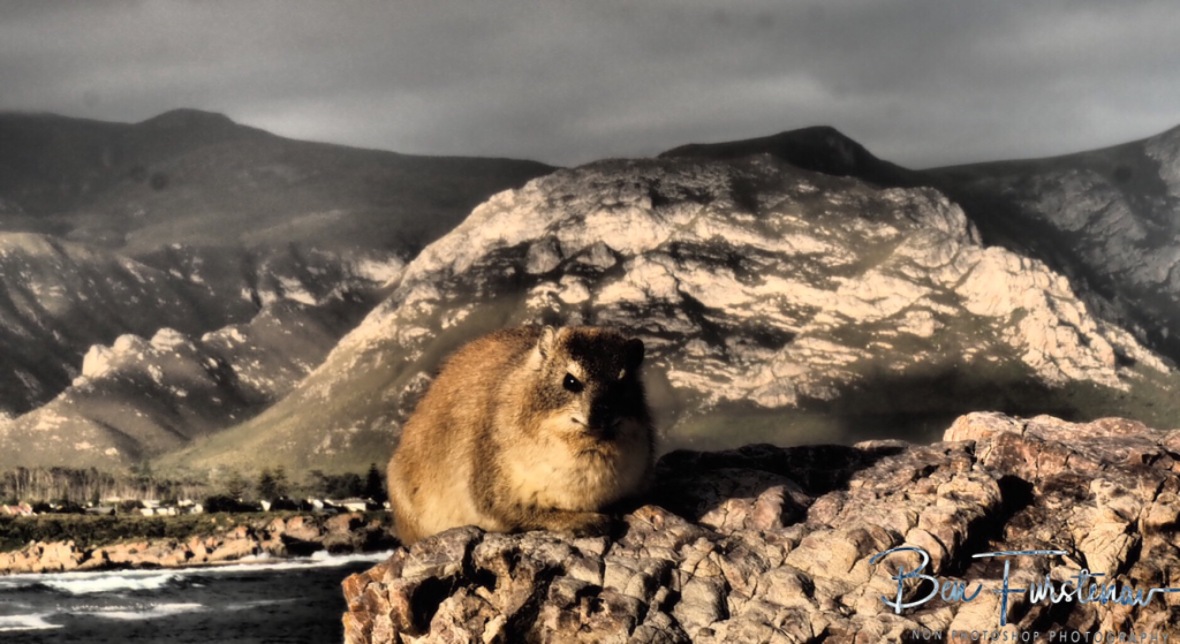 A rock hyrax enjoys the view at Hermanus

We drove in to town to meet a Zimabwian girlfriend Rebecca, Linda met on her previous stay. After a beer at the Tapas bar, we headed to go to local nightclub, ‘6 on Longstreet‘. There was one other Caucasian girl and then the three of us. I was looking forward to some ethnic vibes, as they were lots of fun on Madagascar. Mh, how can I say this. The atmosphere wasn’t as relaxed and it felt a bit like a meat market too. Dancy Linda and Eva had plenty of dodgy offers,e ven I got dragged out to the dance floor. The music just was not my cup of beer, not a fan of those mainstream tunes. Nothing like those groovy tunes. But it was a fun night, beer and tequilas kept the spirits up.

It took me a while to wake up next morning again, but nothing a cup of coffee or two wouldn’t fix. I decided to stay another day, the sun broke through early morning clouds, and I set up for a walk along the whale coast. The swell was impressive, and invited for some good shots.

A few whales were splashing about, much to the joy of the mostly germanus kraut. I chilled at the craft market to some talented musicians, with a coffee in the sun, it is Sunday after all. It was quite busy at the hostel, and it took a bit of kitchen dancing, to move through your dinner in the frying pan. A nice evening chat to Eva and Linda who spent all day, whale watching from the shore. Sean, manager of the backpackers, challenged me for a game of pool, with a familiar smelling rolled ‘cigarette’ in his hand. South Africa and Australia still have a score to settle, he said with an almost arrogant smile on his face. They do?, I asked. We best settle this then for once and for all.

Ha ha, it was a fun night. Shame the other backpackers and friends didn’t stick around to see his humiliating defeat. Australia 4, South Africa 2. During the game, I turned the cheeky comments around in my favour, which made the game even more fun for me anyways. Sorry Sean if you are reading this, just remember,that next time you rack up the balls, don’t think about your mistakes from the previous game. Feel free to comment on this though. Thanx for a great night.