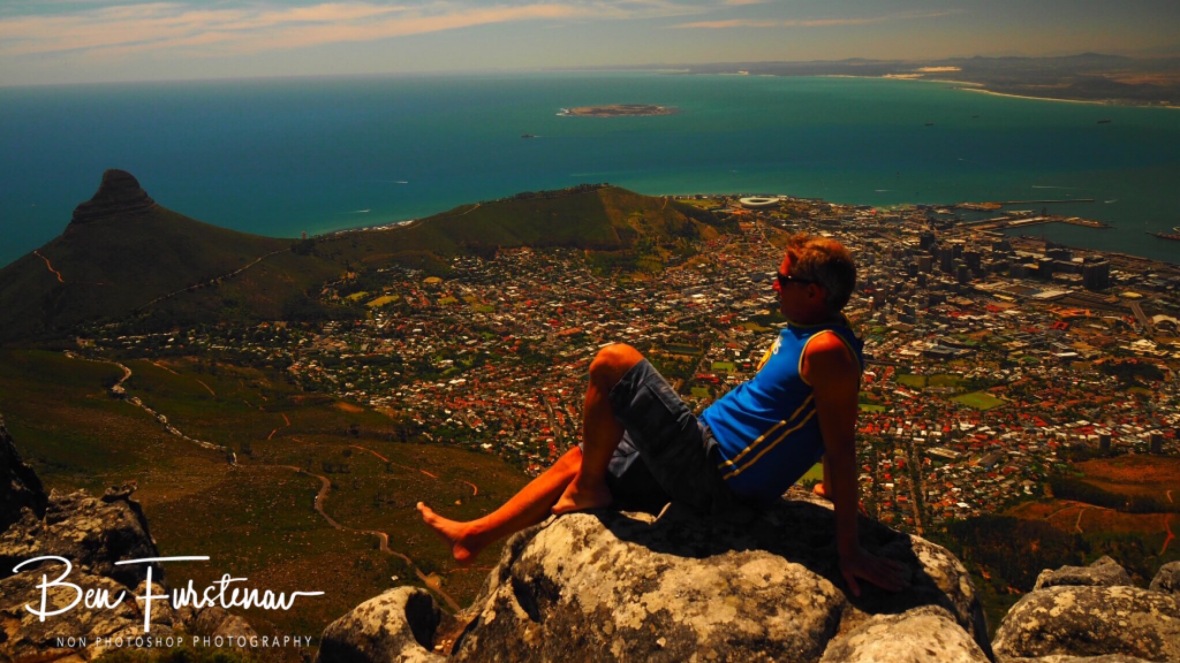 Climbing up Table Mountain with the impressive background of Cape Town, should be a ‘must’ for every visitor and outdoor junkies. Not only does one see different pockets vegetation of this impressive mountain, but get different views over the bay, even as far as to the Cape of Good Hope. Most people prefer a gondola ride up and down the mountain to enjoy splendid views over Cape Town and surrounding bays and mountains.
For one reason or another, I didn’t get to climb up Table Mountain earlier throughout the week after my arrival.
I shared my thought with Terry from Holland the night before, chatting at the backpackers braai night. She was happy to join in, the weather forecast was great too. The ideas was to climb up the steep section at the northern end and leisurely cruise down via cable car.

We drove to ‘Kirstenbosch’ botanical gardens, a must see for any flora and flower enthusiast. Plenty of picnic and braai spots as well and popular with the locals. We started our track via skeleton gorge route. There are a few different options to hike on top. 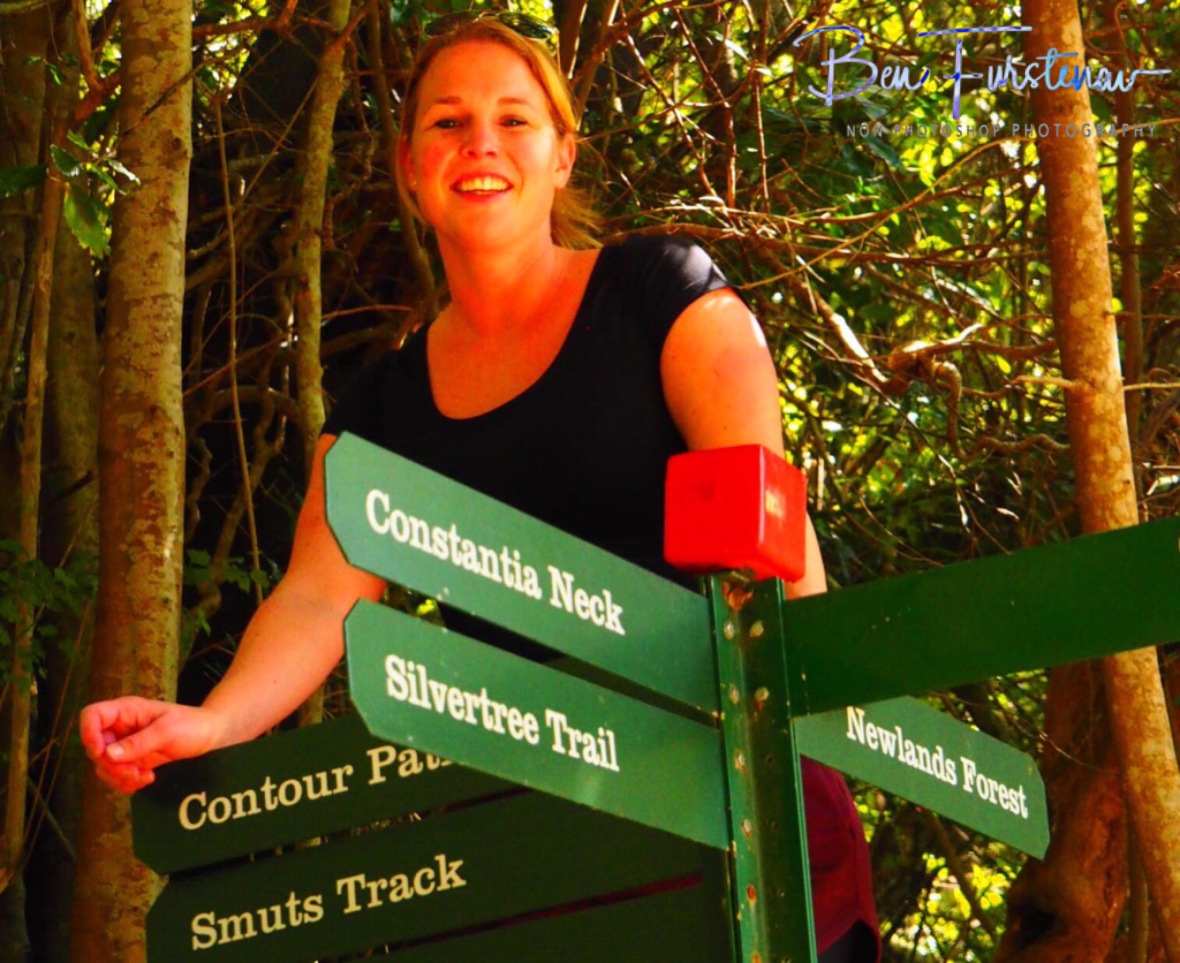 Looking up towards the cliffs, it looked like a steep ascend, and that it was.

I was nicely surprised about the lush vegetation around the gorge, which naturally is the path of skeleton creek.

Cape Town suffers from severe drought issues,the area didn’t receive much rain in the past rainy season, and is now going in to dry season.

The track was somewhat challenging, crossing the creek a few times, slippery rocks or just hauling yourself to the next step, but it was great fun. A few ladders were in place, which helped a lot.

There were a few narrow and slippery sections, which might have been to hard on most human bodies, and on the track itself. I stopped numerous times to take advantage of nature’s colourful display, trying to captivate it on my OM-D.
Terry wandered ahead and we rejoined on top of the plateau. Several tracks led from here again. One of them lead to a lake, which didn’t surprise me as much as the soft white sand we walked on.

It felt, and looked, like we were heading to the beach. The water was clear, settlements from leaves and plants made it a colourful,almost painted like environment.

We found a bit off shade and had a quick stop, enjoying the scenery. After checking the map, we set off again. The sun meanwhile was out in full strength, still relatively calm winds, made it a hot adventure. The view was superb. 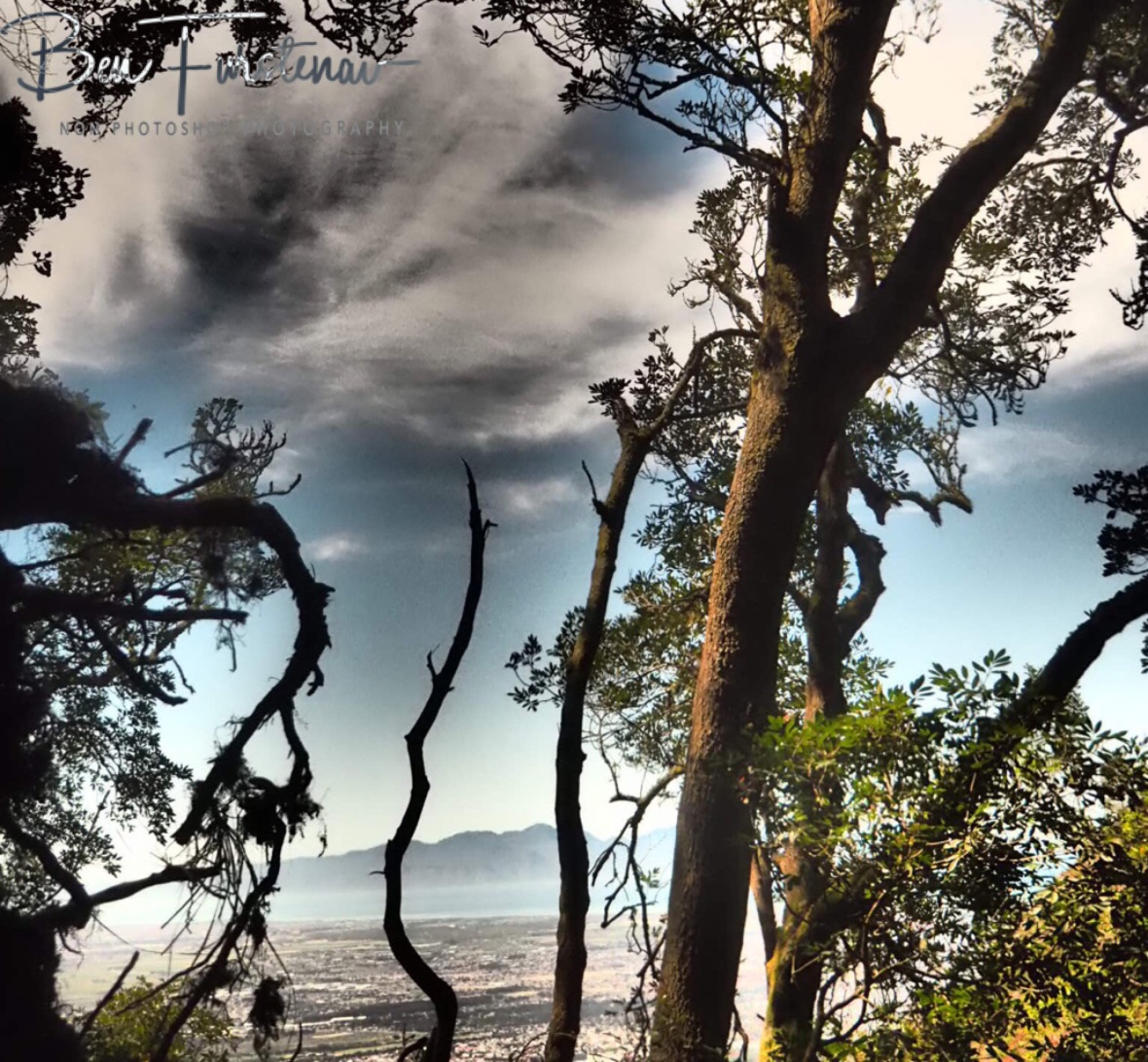 Inland towards Stellenbosch, then out South towards Hout bay and ‘Cape of Good Hope’ peninsula. There still was a fair way to hike to reach the city side and highest point. 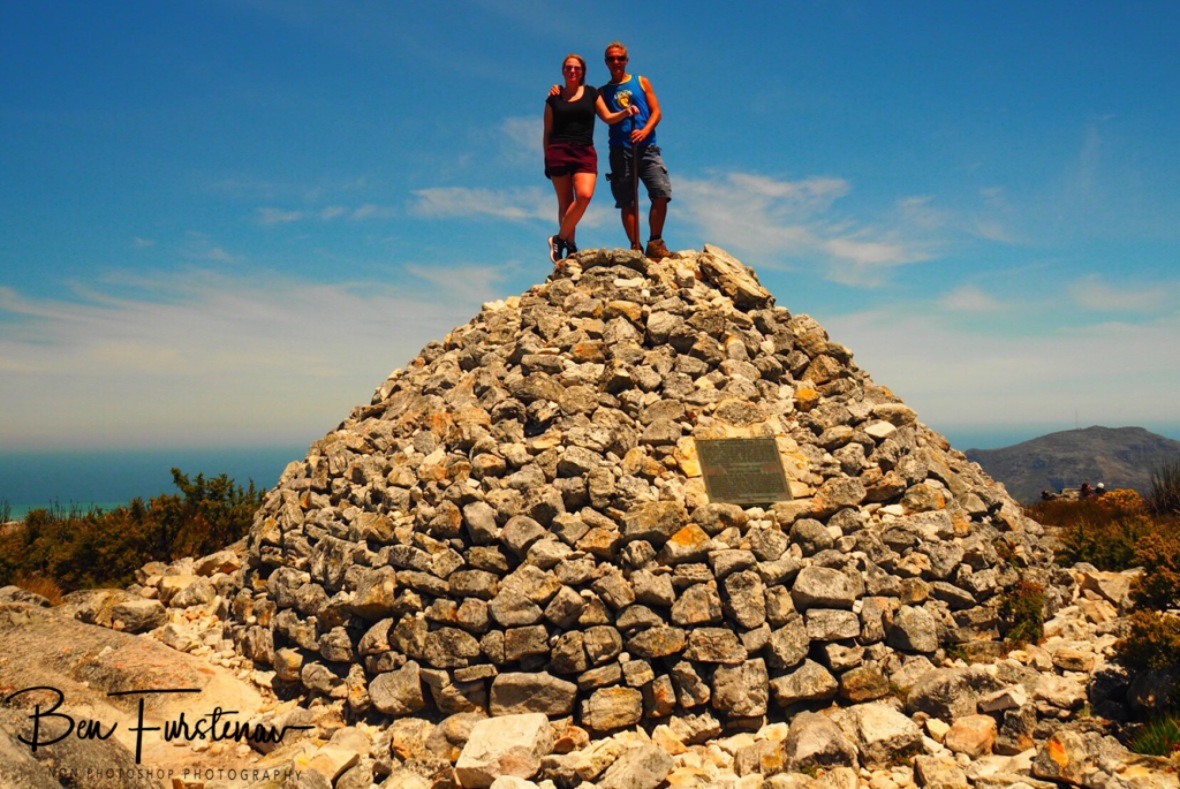 It is a tough hike in hot sunny conditions, the hiking tracks were closed in the afternoon. Terry got a little bit tired. It was definitely worth the effort, as the view over the city and bay were just amazing.

The view over the Cape Town and the bay

We took plenty of breaks to soak in the view. The downside of being at the cable car side is the sheer amount of people. It was a beautiful Saturday afternoon meanwhile and everyone seemed to make the most of a splendid day. Fair enough, just too busy for me. The queue to the cable car was immense. I decided to hike the way I came, back to Zimba. Terry wasn’t in for that and stood in line for a cruisy gondola ride. I can’t blame her.
It was just as hard to go down, as it was to go up. My knees weren’t overly impressed going downhill, as always. 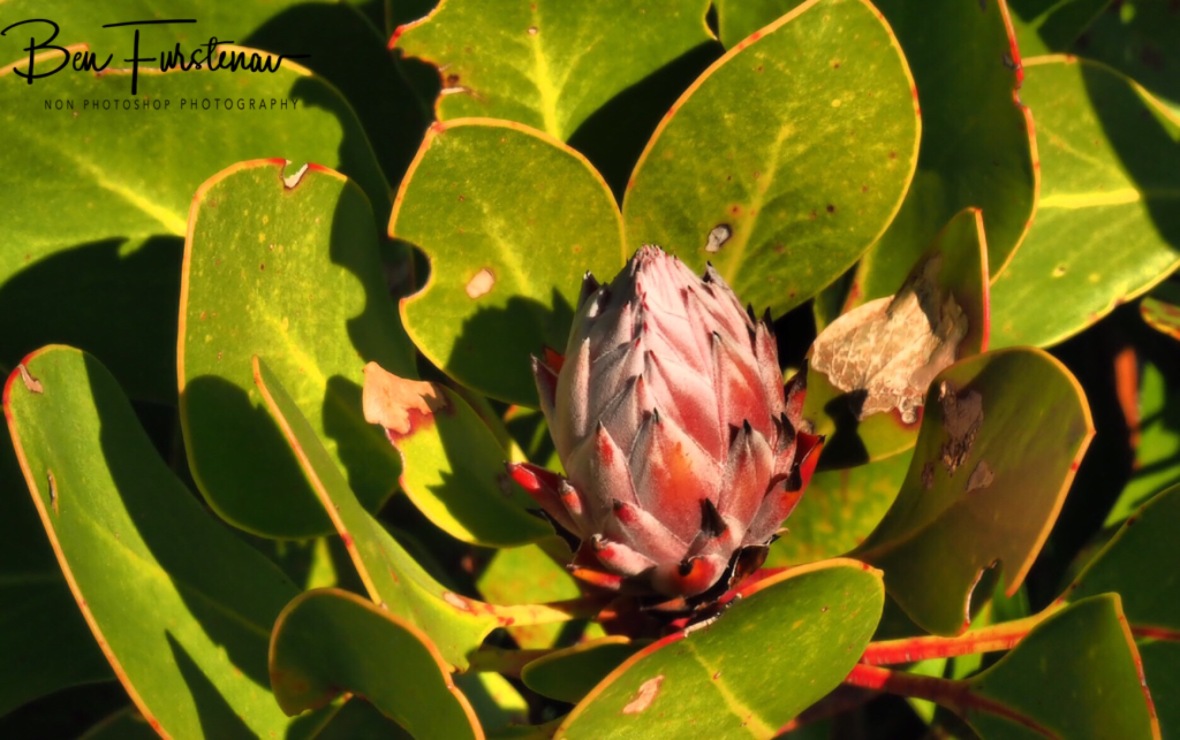 Walking in opposite direction gives you another, different perspective on the area. The sunlight had changed too, very important for photography. Quite a lot of people are running up and down this mountain, which scared the jeepers outta me, approaching from behind on their sneakers. Guess, that’s why they are called that. 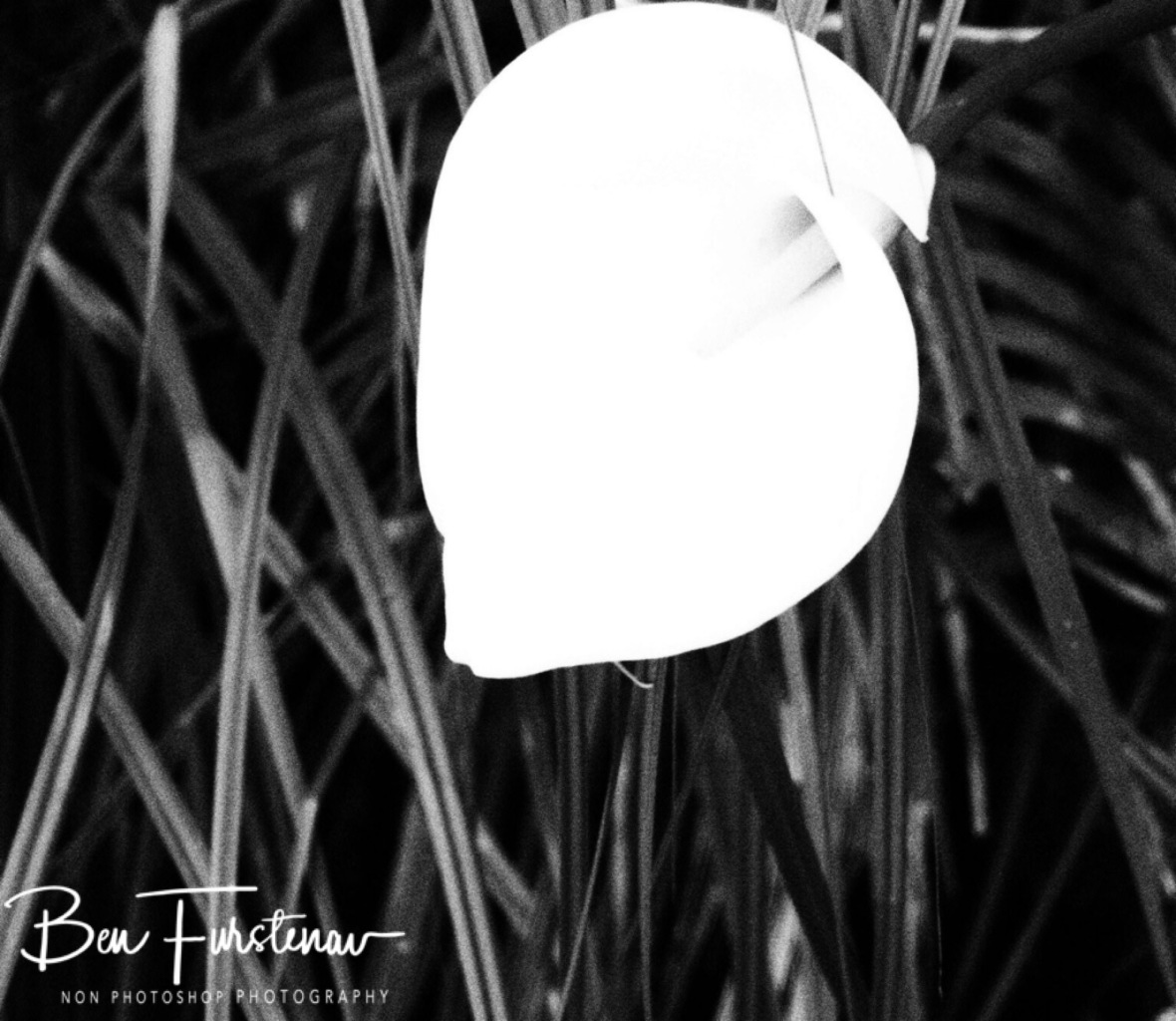 I was a happy camper to see my camping buddy Zimba again. He missed out on a fun day, only today though.