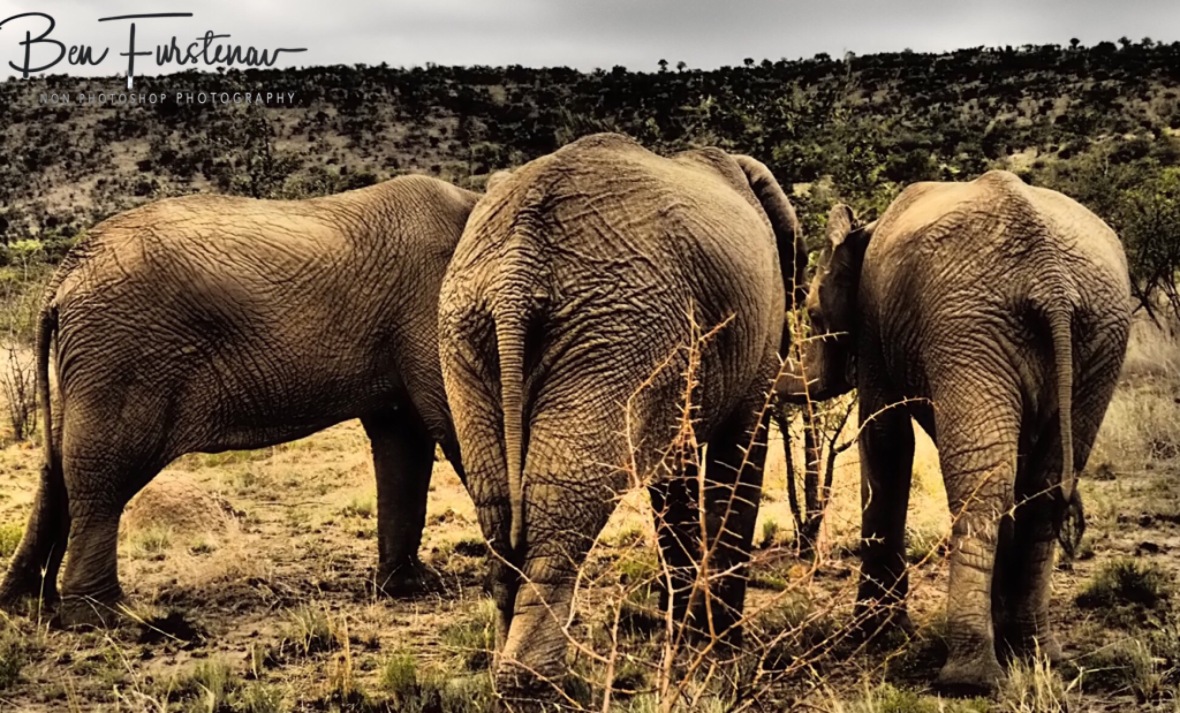 Pilansberg National Park is just north of Suncity, South Africa’s version of Las Vegas. The area used to be a 7000m towering volcano about 2000 million years ago. Over time, and many many eruptions, it simply collapsed. The mountains around are actually not the usual crater, but the lava tubes.

I checked in for two nights at Manyane Resort and found a shady campsite,cthere are plenty to choose from on this spacious site, no need to sit on your neighbours. Hard gravel sand, but well maintained. I had to contain myself not to go wildlife spotting straight away, as it was another steaming hot day. I learnt from my Kgalagadi wildlife spotting beginners course. I hope I can get to advanced level here. There was plenty of wildlife around the campground already. 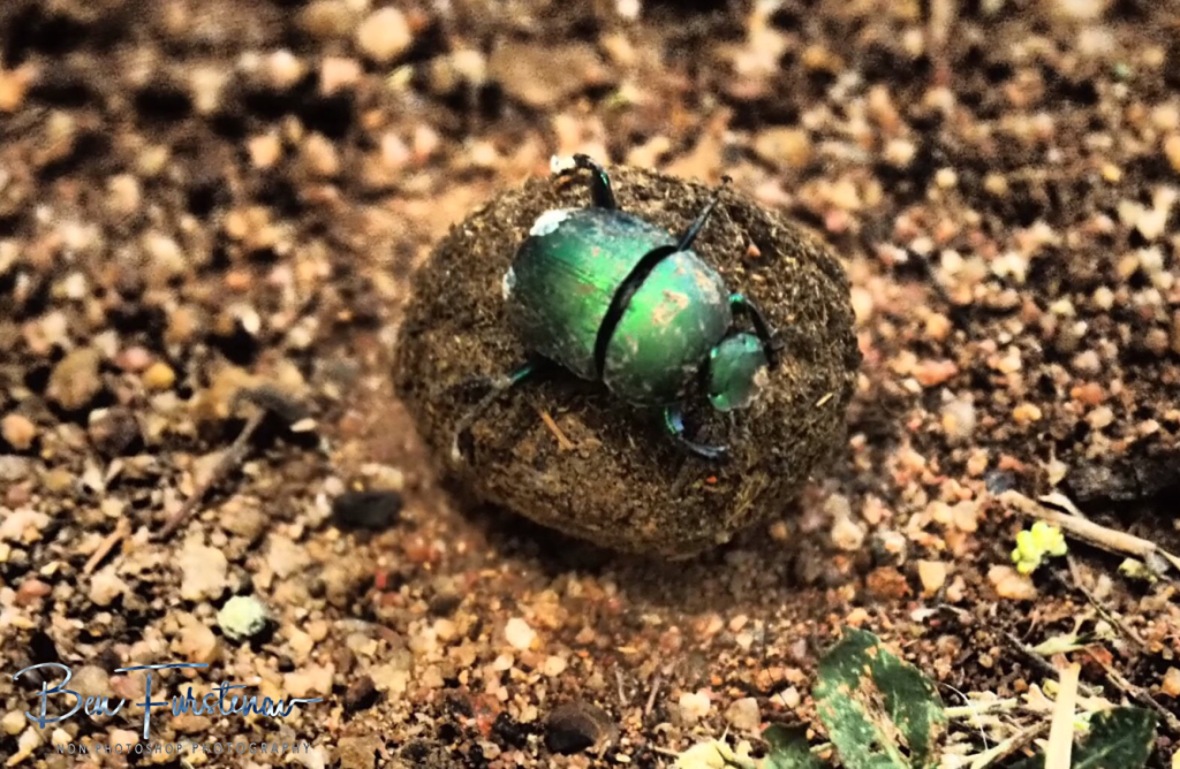 First I spotted the ever so busy dung-beetle, pushing his load of shite with his hind legs. Poor thing was going around in circles. I have forgotten why they do this, I need to refresh my memory from the Atten-bro. A large bunch of stripped mongoose scavenged throughout the campground, it almost felt like an invasion. 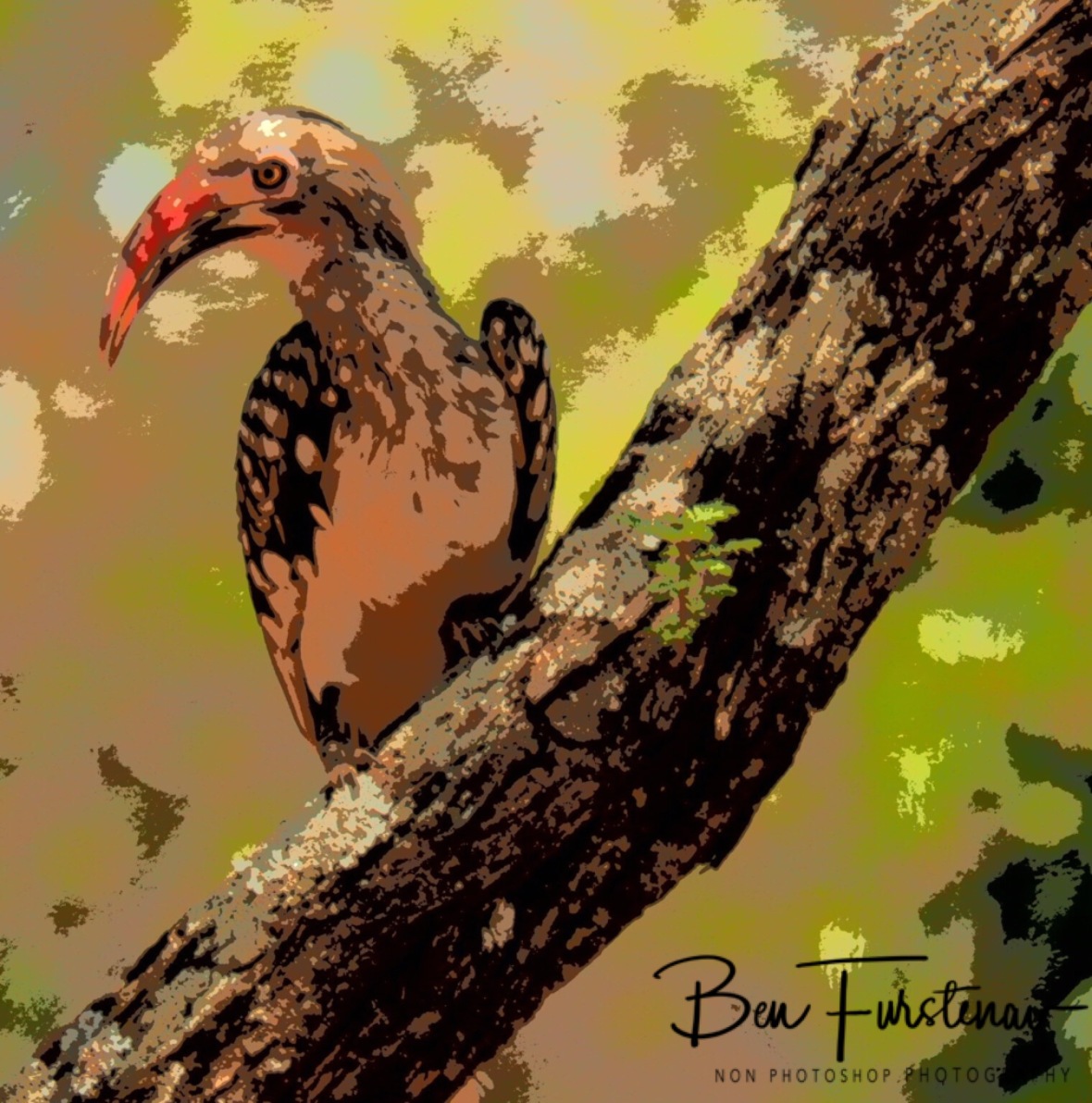 A couple of Hornbills calling each other in trees behind me and Impalas were roaming freely. Time to cool off in the pool and get going, the wild was calling. 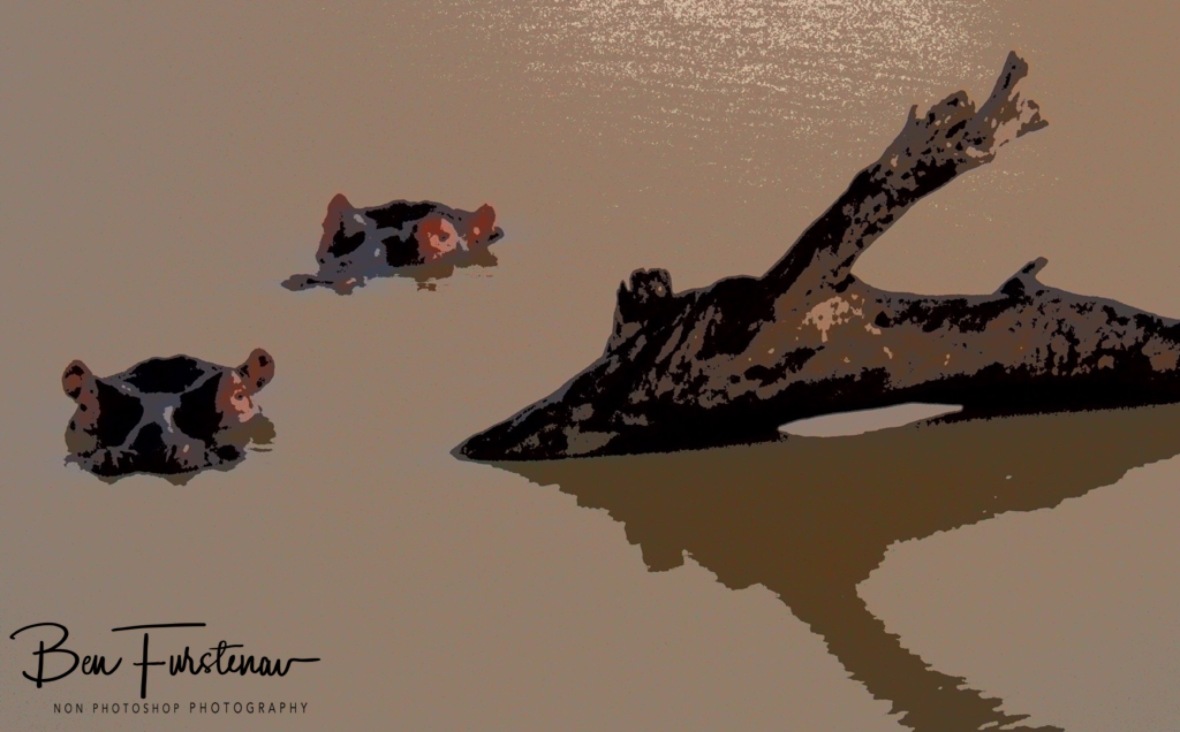 My first stop was at a wee pond with a couple of hippos dipping their head in and out of water, like a ballet. I then cruised up to ‘Rathogo waterhole’, with not all much luck spotting wildlife on my drive up. The grass had grown pretty high, which made spotting even harder. Driving, spotting and driving is still a skill. I parked Zimba at a half open fenced car park, one other car was on sight. 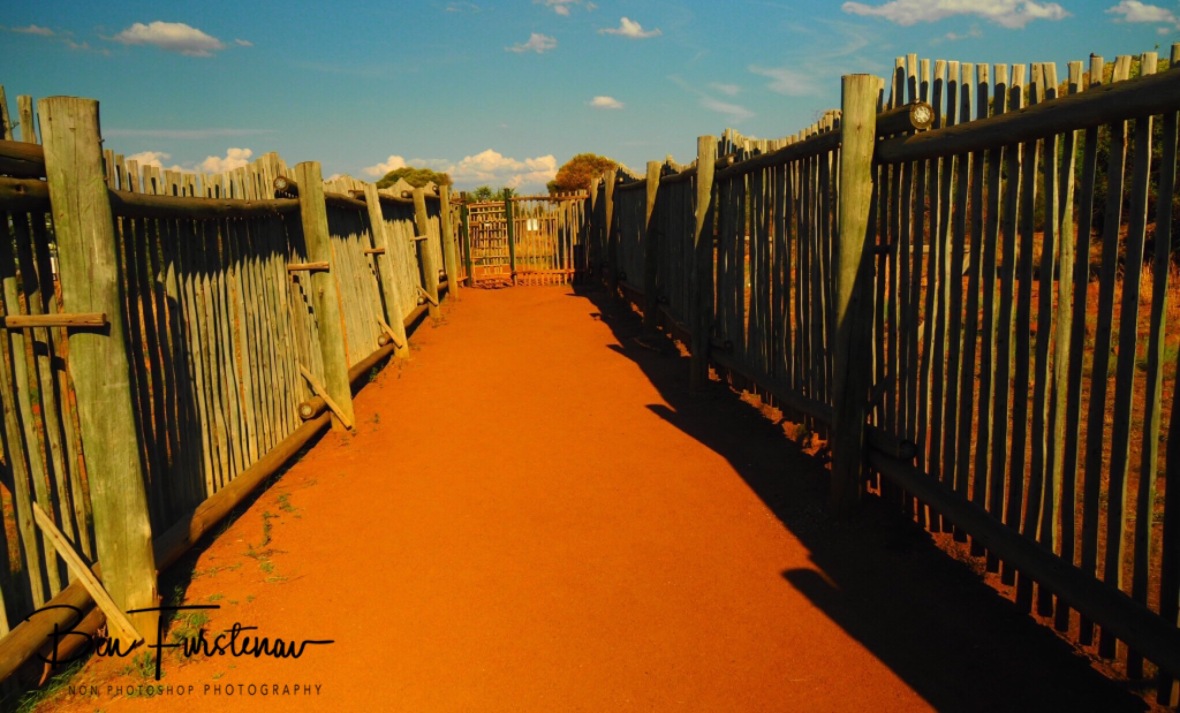 It felt a bit like walking to a prison cell, instead to a Hyde by a waterhole. Wooden benches in front of open windows and a very squeaky wooden floor, as I walked in. A young couple from Johannesburg pointed out 5 Rhinos behind the bushes. Two of them showed themselves for a brief moment. A few Impala were grazing, not too much action. The couple marked a few points of interest of latest sightings on my map, info I couldn’t get from the National Park staff. There’s an internet site called ‘Pilansberg sightings’, similar to the WhatsApp idea. If anyone spots a sought after animal, it gets posted on that site, so others could go there. Great idea, but not much internet out here. I had a look and stumbled across ‘no Rhino location to be posted’.

A little naive and surprised I asked why? Surely people would like to see Rhinos??? Due to poaching, she replied. I felt somewhat dumbfounded and surprised. Too naive, I didn’t think of the obvious. I didn’t think I had to. This is a National Park with fences, security and other safety measures. Yet, they lost 4 Rhinos in the last 4 weeks. How is that possible?? Clearly an insider job, money and greed over a gentle giants life, for useless potency voodoo. Sad, sad world. 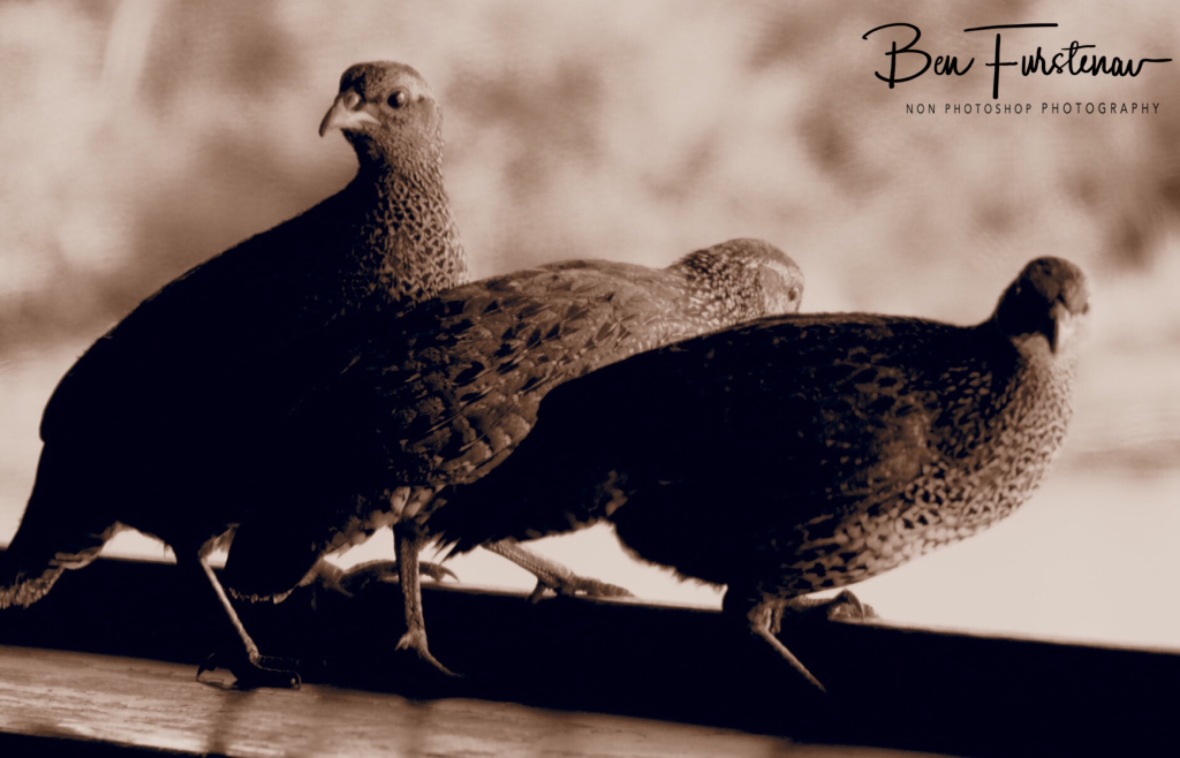 Meanwhile, we had a pheasant surprise. Those cuties ran up and down the viewing platform, just like pro wildlife spotters. Pay attention!, they seemed to say and ran off, as if they knew what was coming. Right they were. Shortly after an elephant arrived. 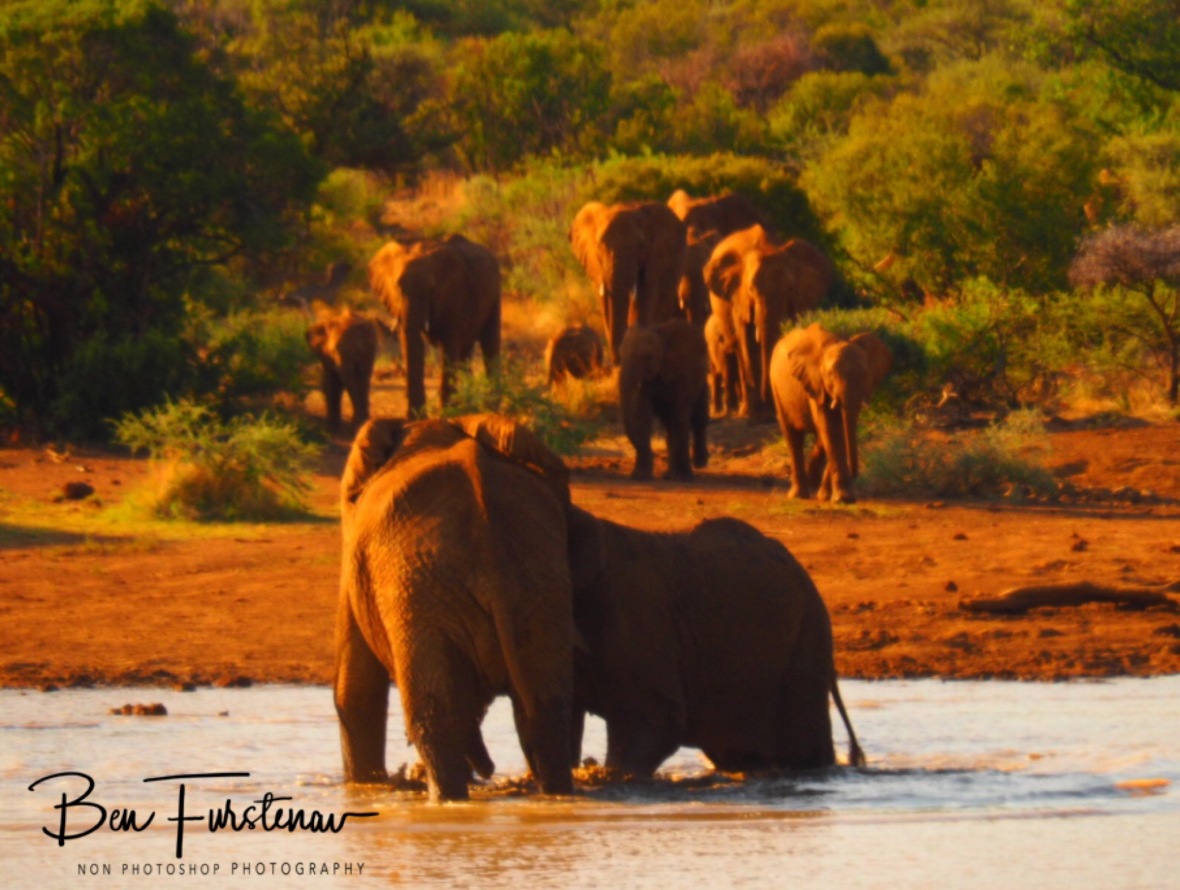 Then two,then it was three, next thing it was about twenty. Running towards the pool like kids to an ice cream stand, full of joy. What a sight! It is useless even trying to describe the scenes unfolded. 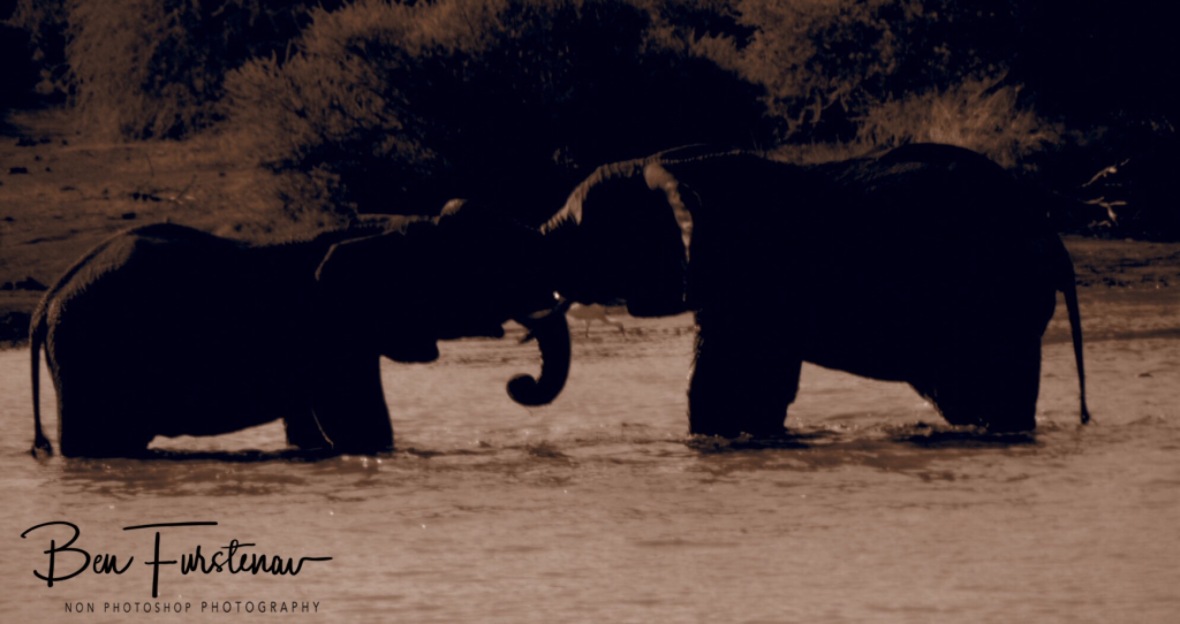 The first two started play fighting. I thought at first they were both young bulls, fine tuning their wrestling skills. 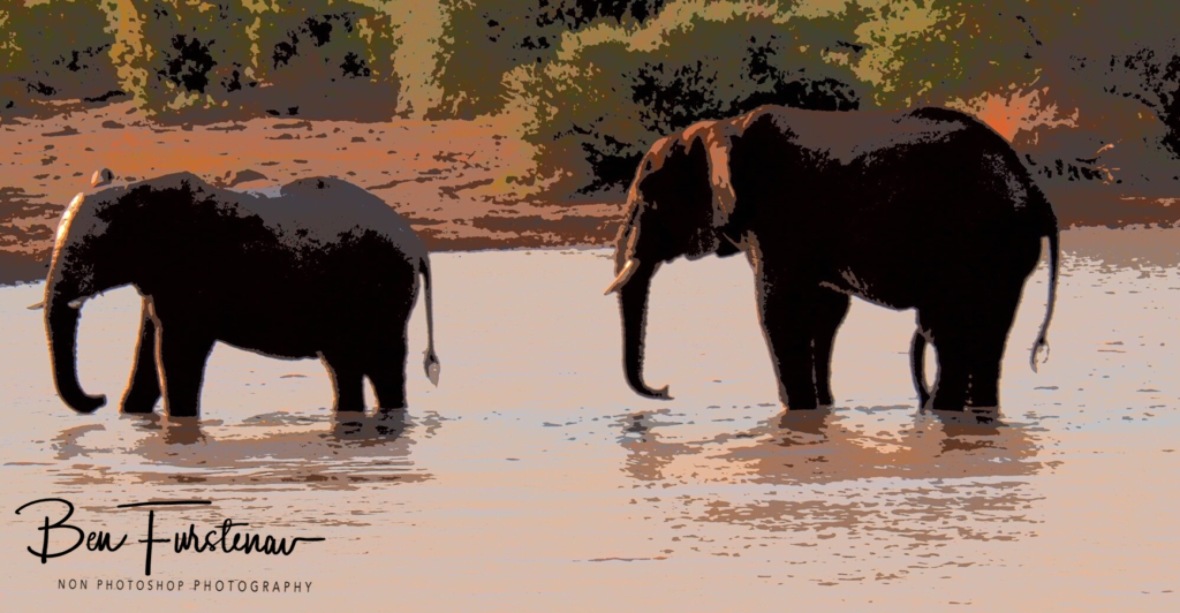 Someone got too excited, and disappointed. Pilansberg National Park

But that wasn’t quite the case, as one of them had 5 legs all over sudden. The rest of the herd enjoyed the waters just as much. The smallest ones are always in the middle out off safety reasons. 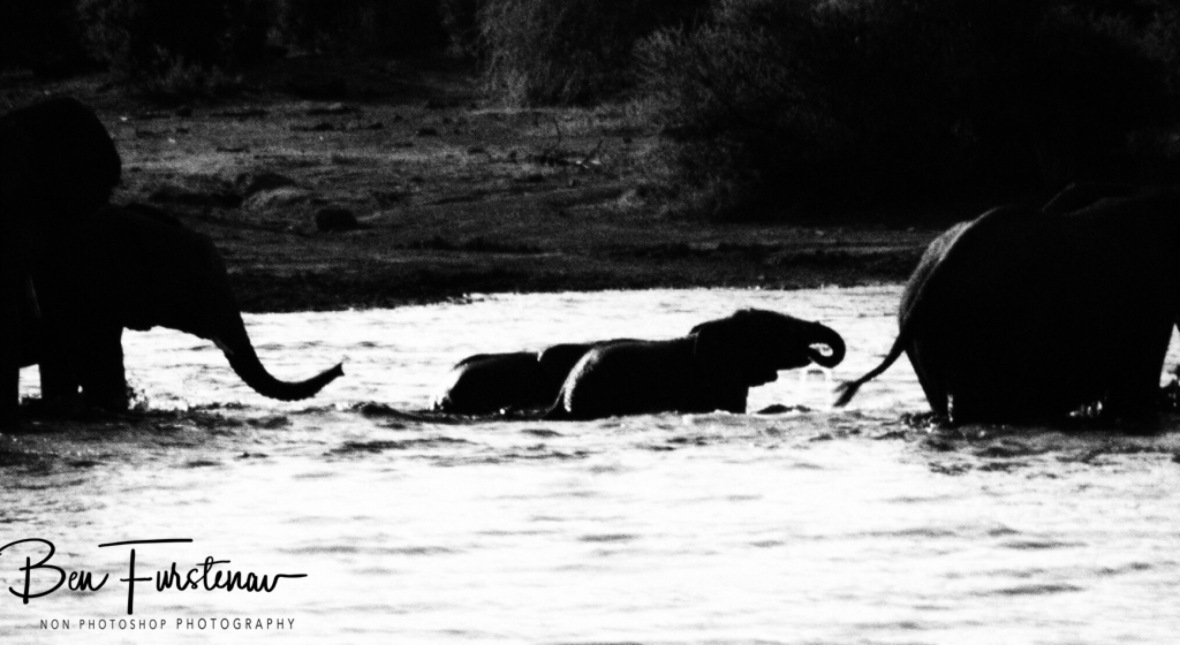 An exciting day for the youngsters, carefully watched by the family, Pilansberg National Park

It was breathtaking watching them playing and spraying. Even the poor spoonbill got chased off. This went on for a good half an hour, before they disappeared behind the bushes they came from. 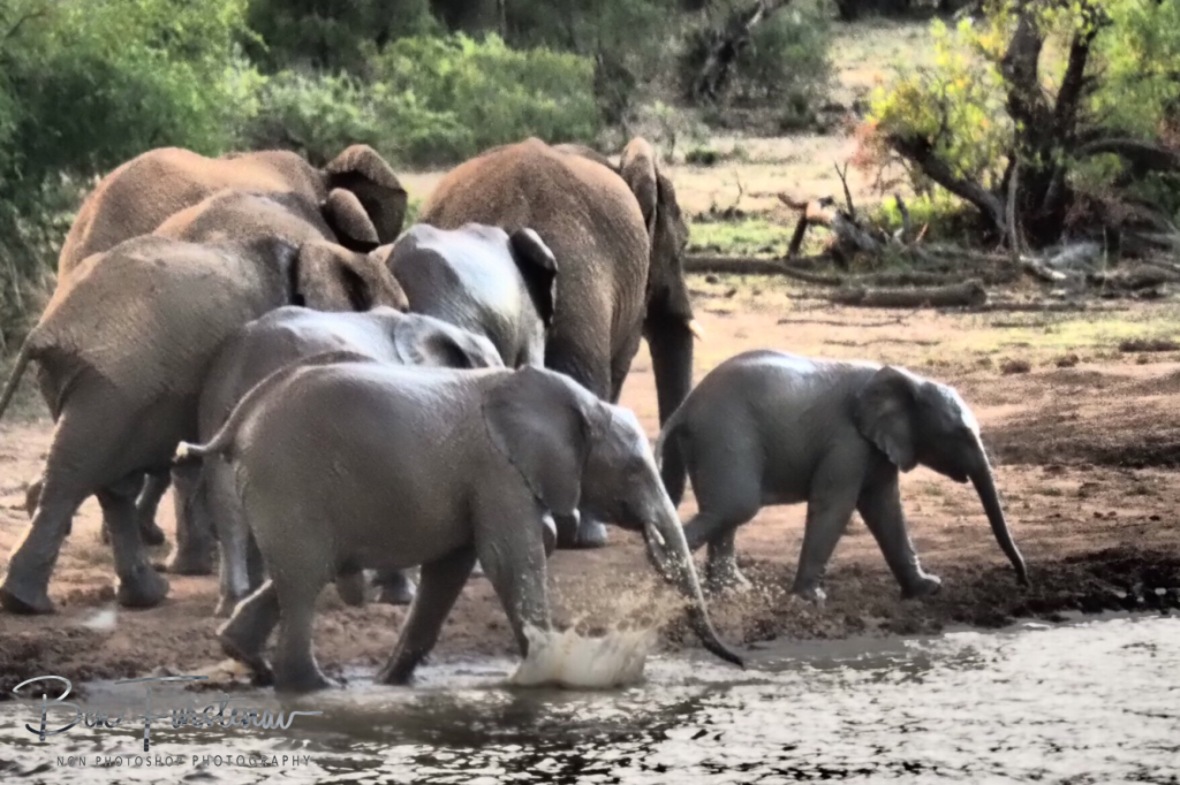 Elephant parade back in the bush, Pilansberg National Park

Quite surprising how a herd of the biggest land mammal can just disappear in no time behind dense bush. It was ghostly quite afterwards, apart from those squeaking wooden floors. 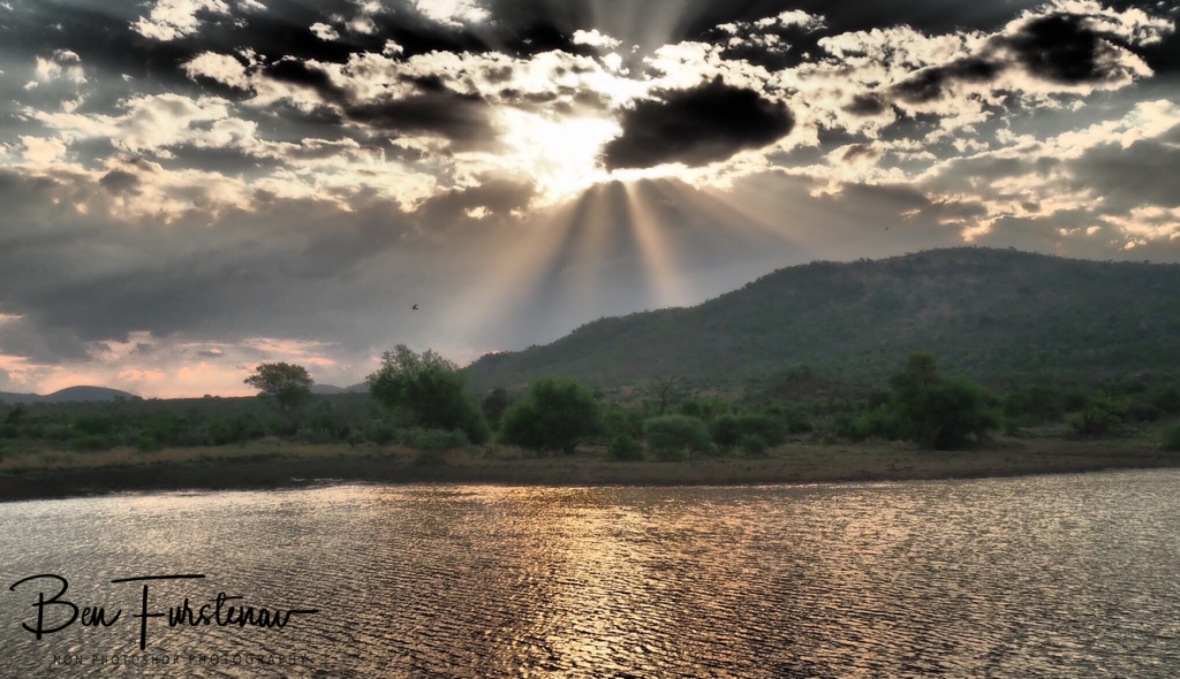 We were all still amazed of that spectacle and enjoyed the sun rays, when the next herd arrived from the same direction. They circled the lake to the area to where the previous herd hadn’t disturbed the water and were just as happy to drink, play and enjoy.

It almost looked like synchronized drinking, it reminded me of the ‘jungle book’ animation movie. 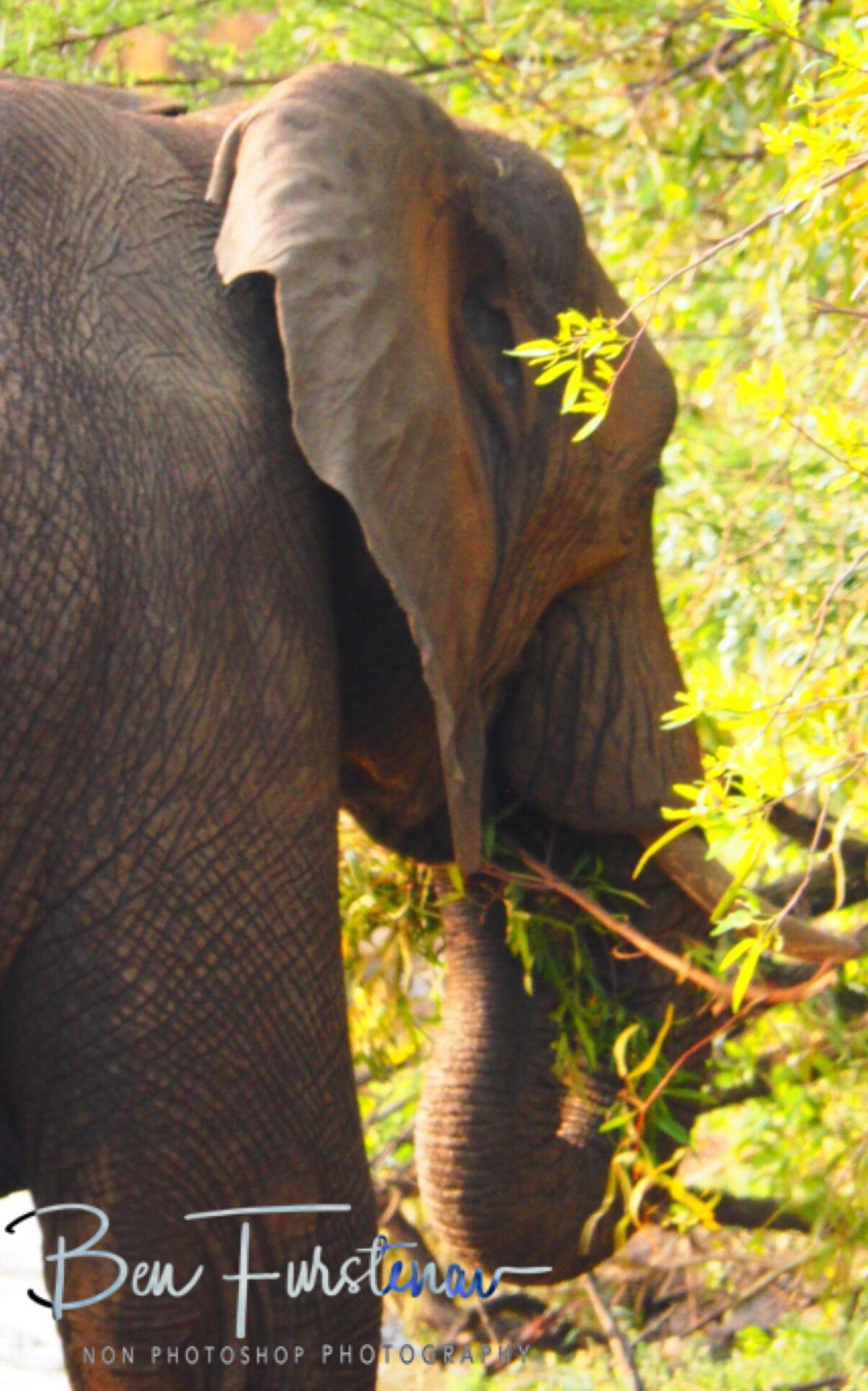 One bull appeared from behind the lake and stood all over sudden, only meters away from our Hyde, enjoying some fresh, juicy leaves. 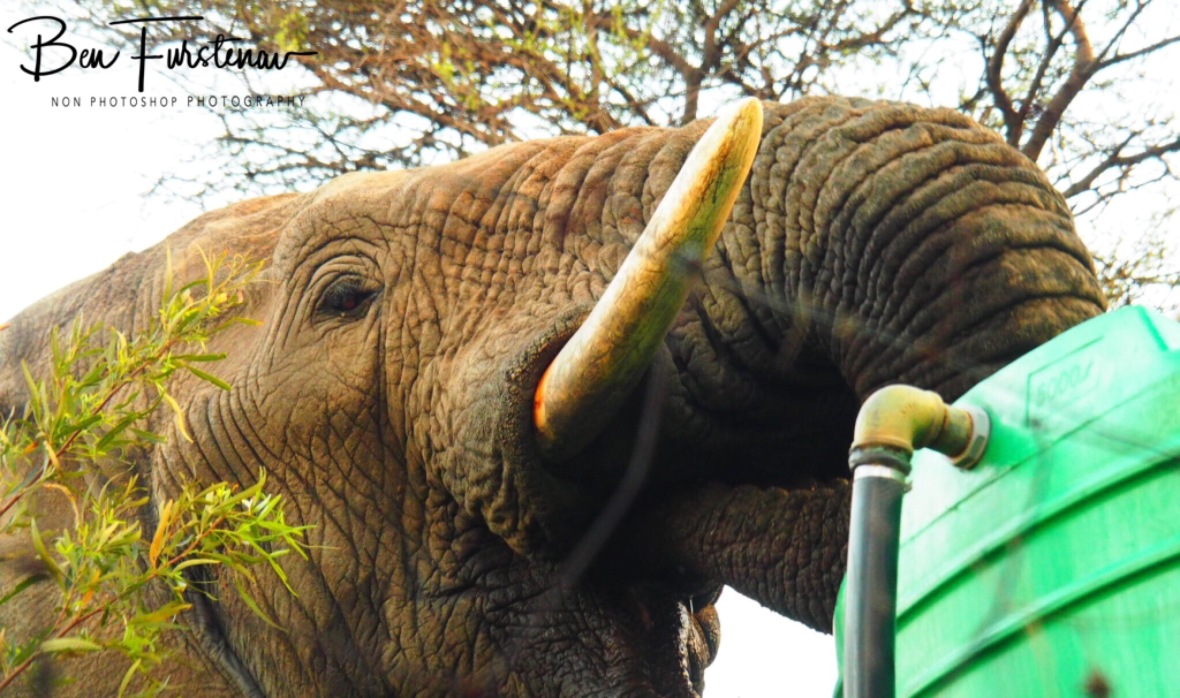 Tank water is so much tastier, an old bull knows. Pilansberg National Park

Another big big bull preferred the toilet tank water right behind the Hyde and stuck his trunk in to it. Only a wooden fence separated me from this giant.

I was tempted to touch his skin. Better not. They disappeared just as quick as the previous herd.
What an elefantastic theatre with intermission, joy and fun, food and drinks, drama, action and almost romance. Poor bugger thought it is his lucky lake. The sun faded behind the mountains,and it was time to get out of the park, closing time. 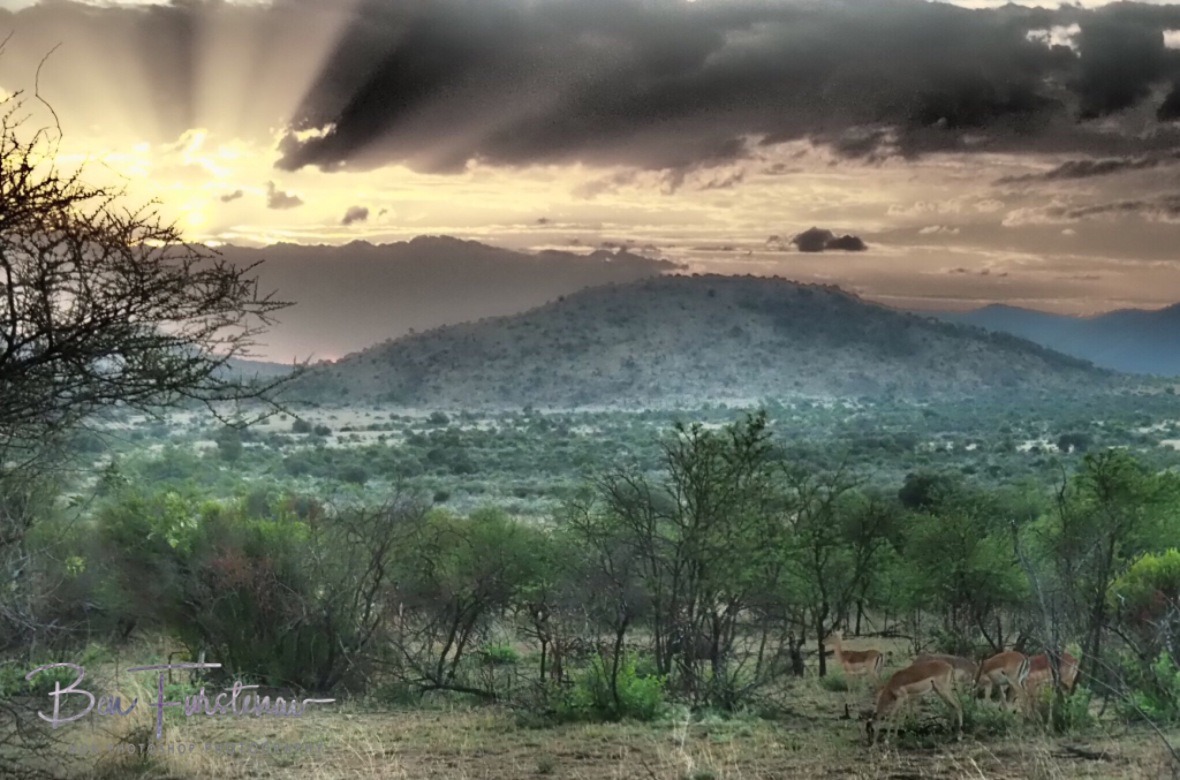 Wow. Back at camp, a small group of middle aged German ladies decided to camp right next to me, even though there were loads of other empty spaces left!!? I was tempted to ask politely, why they didn’t make use of the space this campground offers. In German. the look on their faces would have been priceless.

A flame grilled steak on open fire by clear skies, recapping an amazing day. I was still pumped with adrenaline, what an elephantastic spectacle. It still warm and humid, I was still topless staring at the fire.