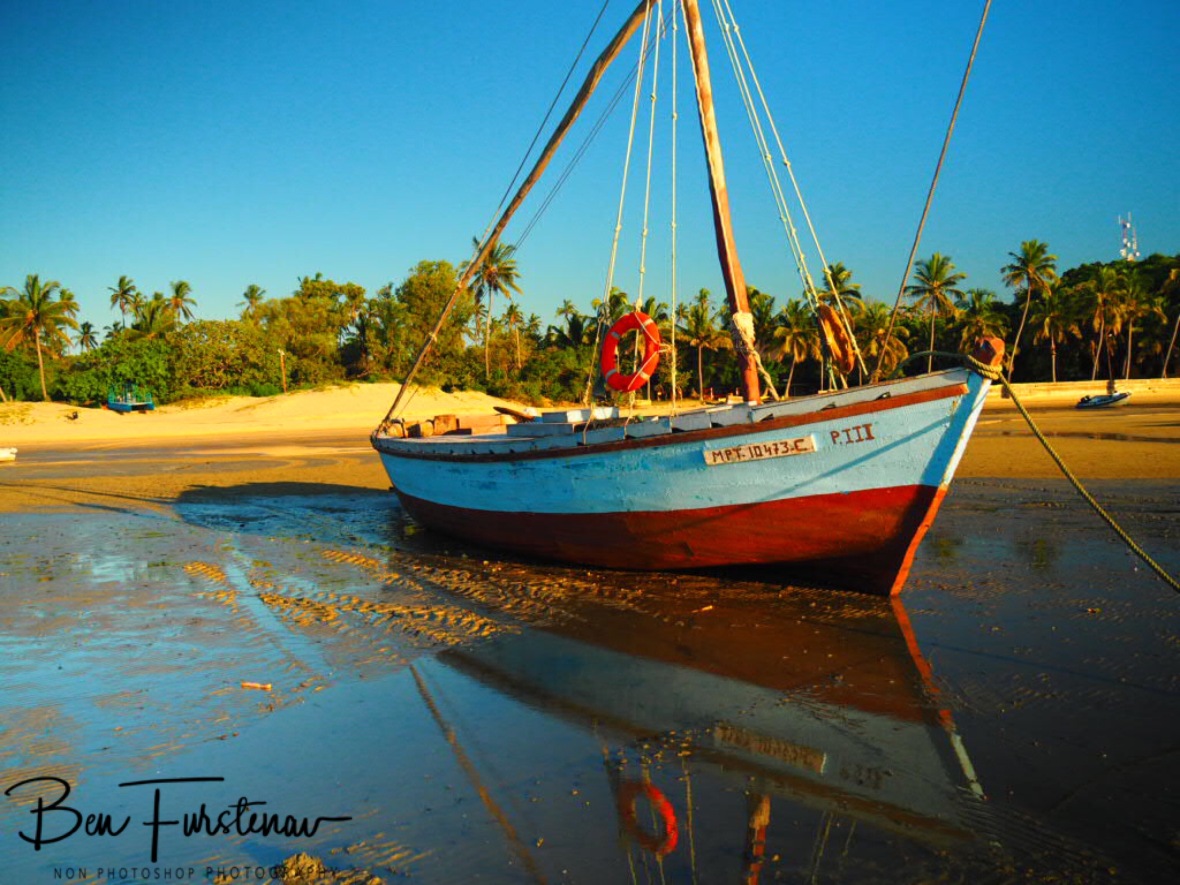 The sun was just coming up over the horizon when Zimba and I drove along the sandy tracks to the Northern tip of Machangulo Peninsula. 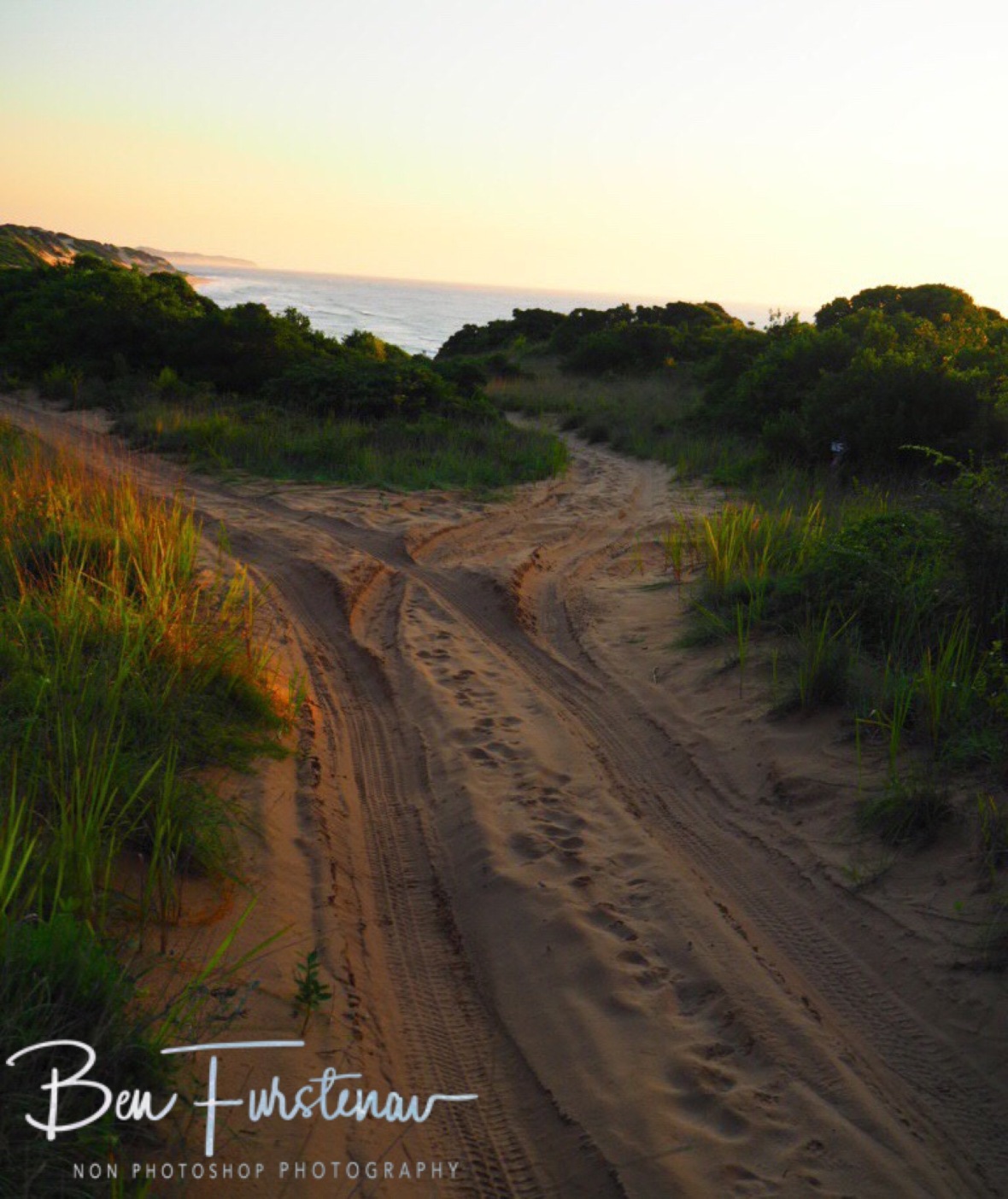 Sunrise along the sand tracks on Machangulo peninsula

I got early to ‘Bemugys Place’, which offers affordable chalets, a restaurant and beach bar right on the beach. It is the same place we visited last Friday upon my arrival. 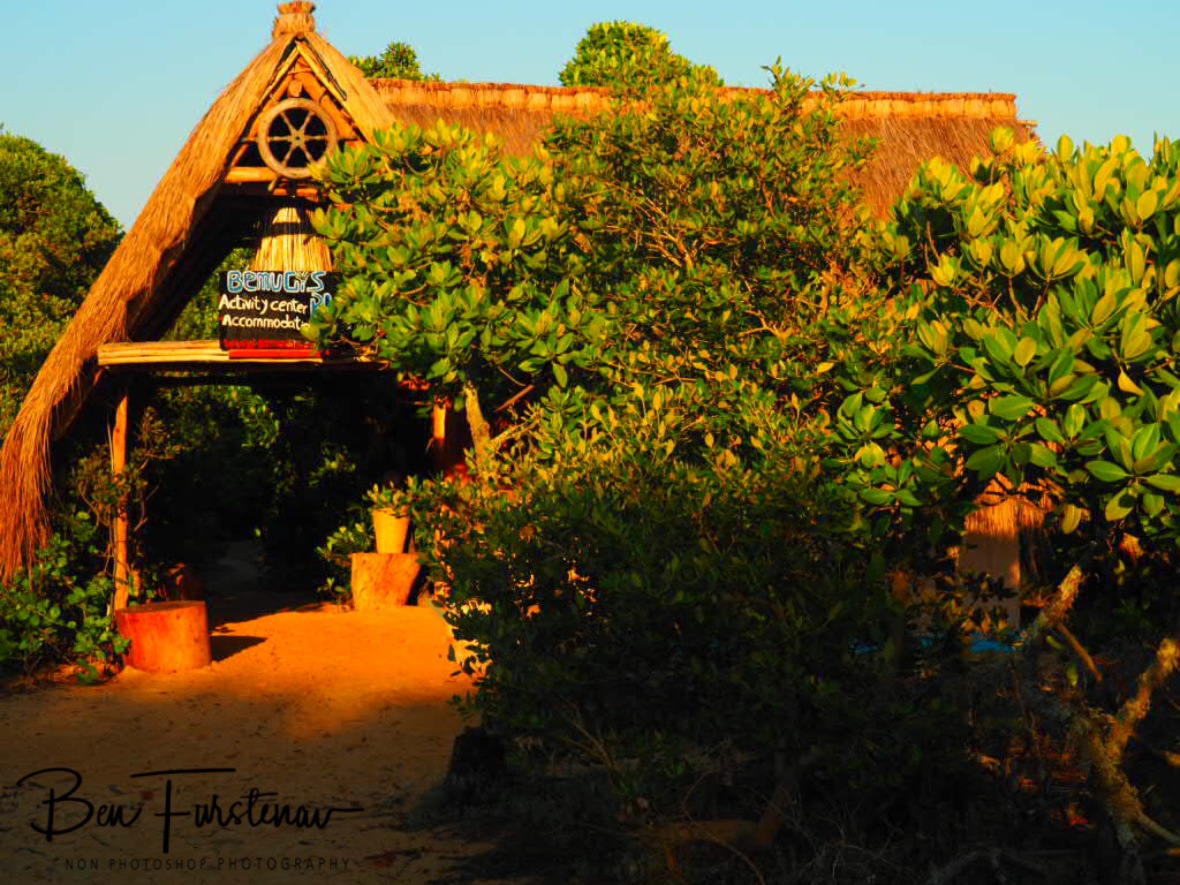 From here we were launching the boat for an island trip over to Inhaca Island. Time enough for coffee and sandwich and a chat with resort owner Benji and secretary Heather and teenage relatives, who would join me and a friendly couple from South Africa. Fairly strong winds gave the swell an extra boost, conditions were a bit choppy. We took some snorkelling masks and fins as well, there are some impressive reefs around the island. Young captain Marcello shipped us safely through the channels between islands and sandbars.

Fishing is the main food source around Inhaca Island too, which became very obvious as we sailed into the sheltered bay.

Almost like a mirror, dhow reflections on Inhaca Island

A fleet of ‘dhows’, wooden sailboats, were anchored in shallow waters,

and some had run out off tidal waters already.

A fancy resort some years ago has been neglected and closed for 3 Years.  Benji, who grew up in Inhaca Village, lead us through his hometown.

A rather small, but happy community, going on with their daily, typically African business. 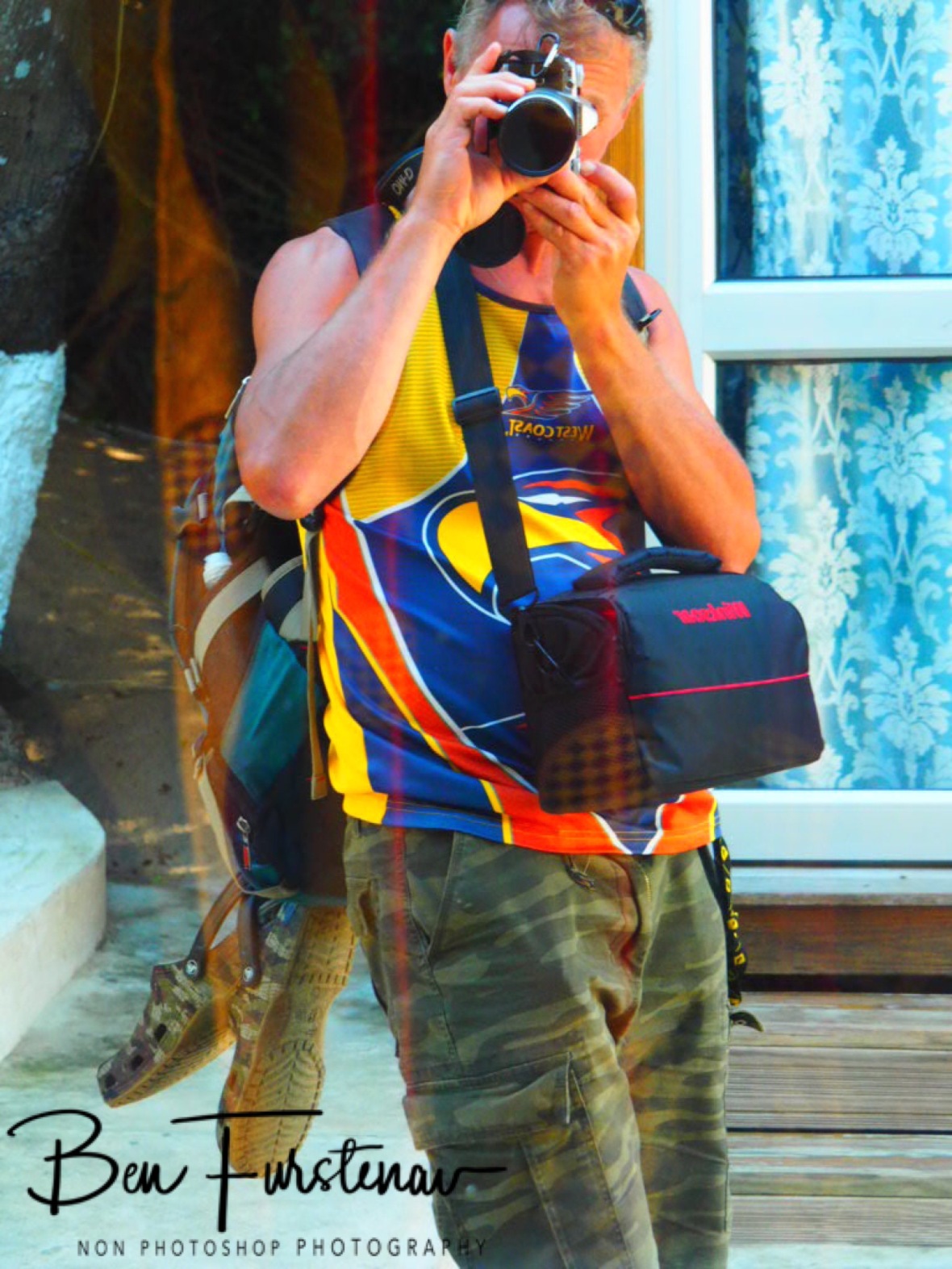 I had time for a selfie too. Benji organised a Toyota 4WD for a trip up to the lighthouse, the highest point on this sandy island.

All aboard! The captain said, Inhaca Island

Spirits were high, particularly after Captain Morgan joined us, as we drove along agricultural blocks, belonging to different families of the communities. Each one plants and harvests their own rice, millet grain or vegetables. 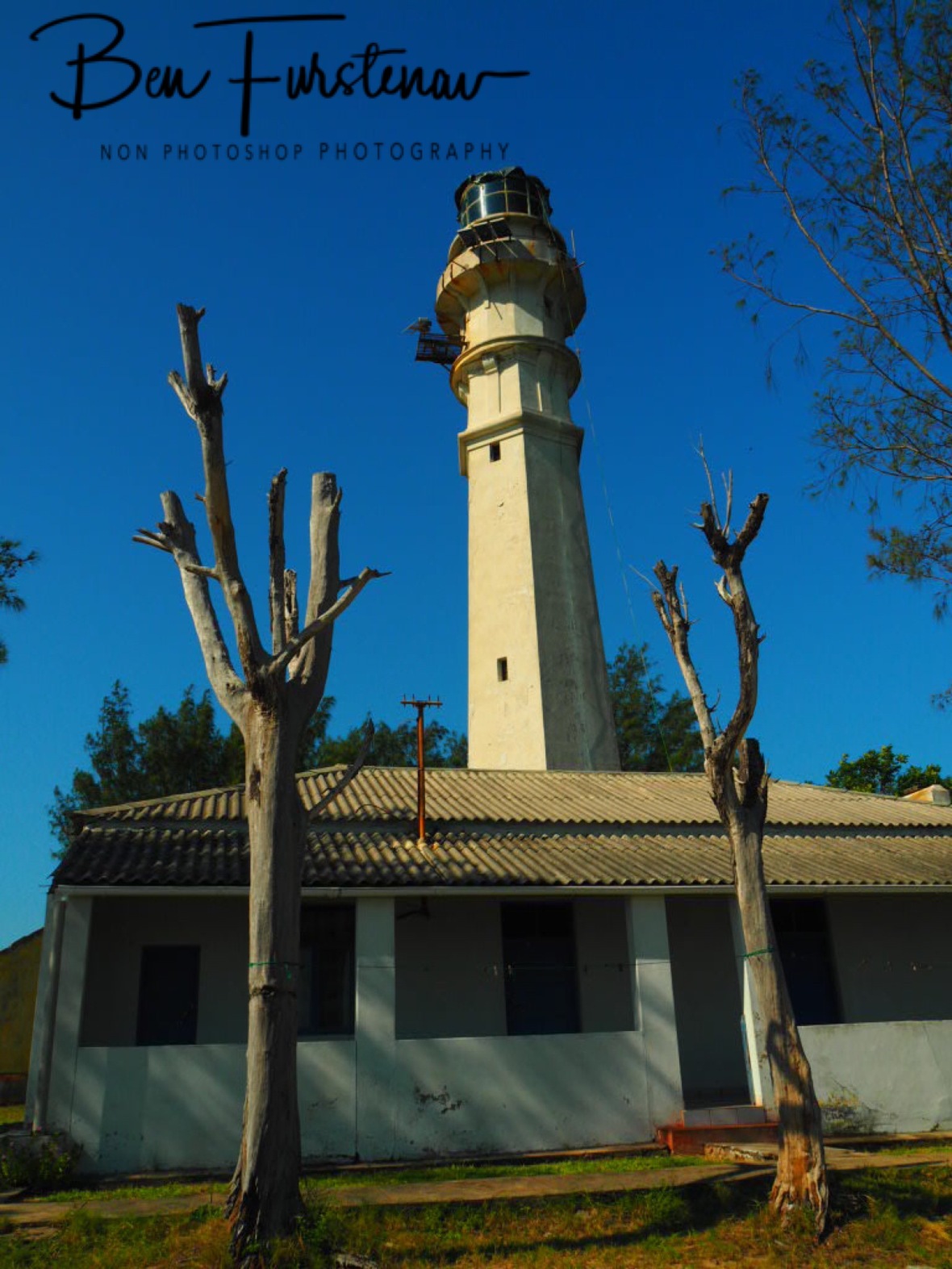 The lighthouse was still working with the help of solar power, yet the surrounding buildings were in ruins.

The flora around was rather spiky, 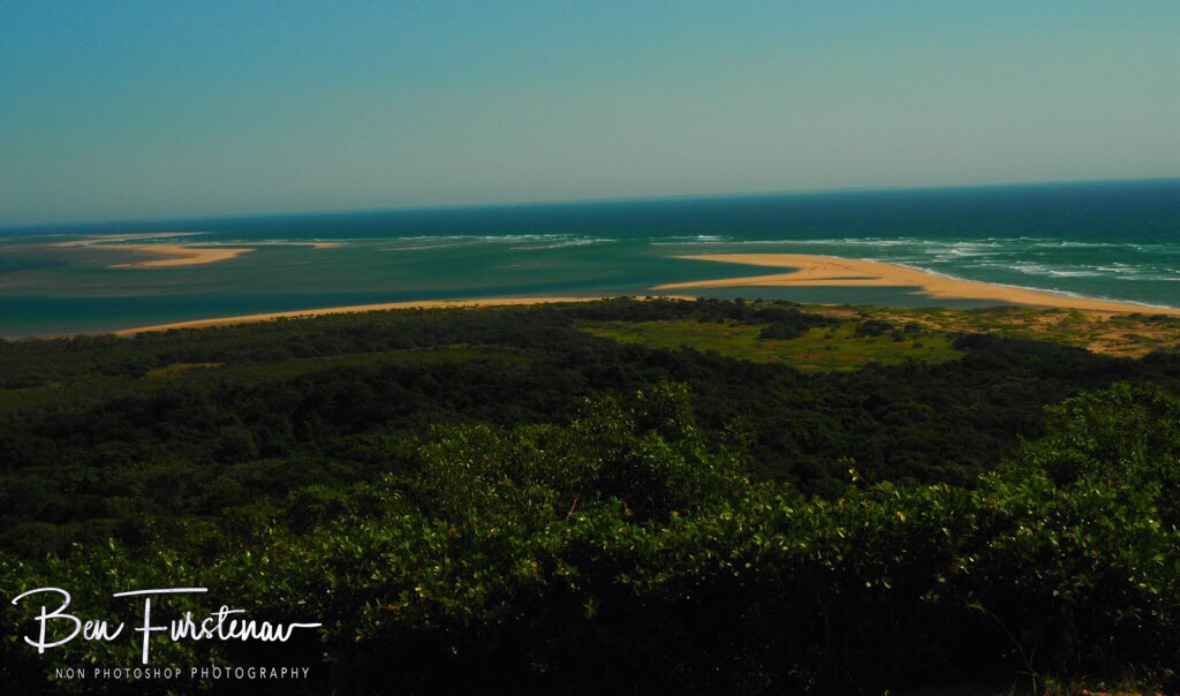 and the view over the sandbars was endless.

A Great spot to refill,

A happy group photo rounded our visit nicely up.

We drove on to the nearby beach. Soft white sand eventually gave way to the outgoing ocean.

The lighthouse was clearly seen in the not so far distance. 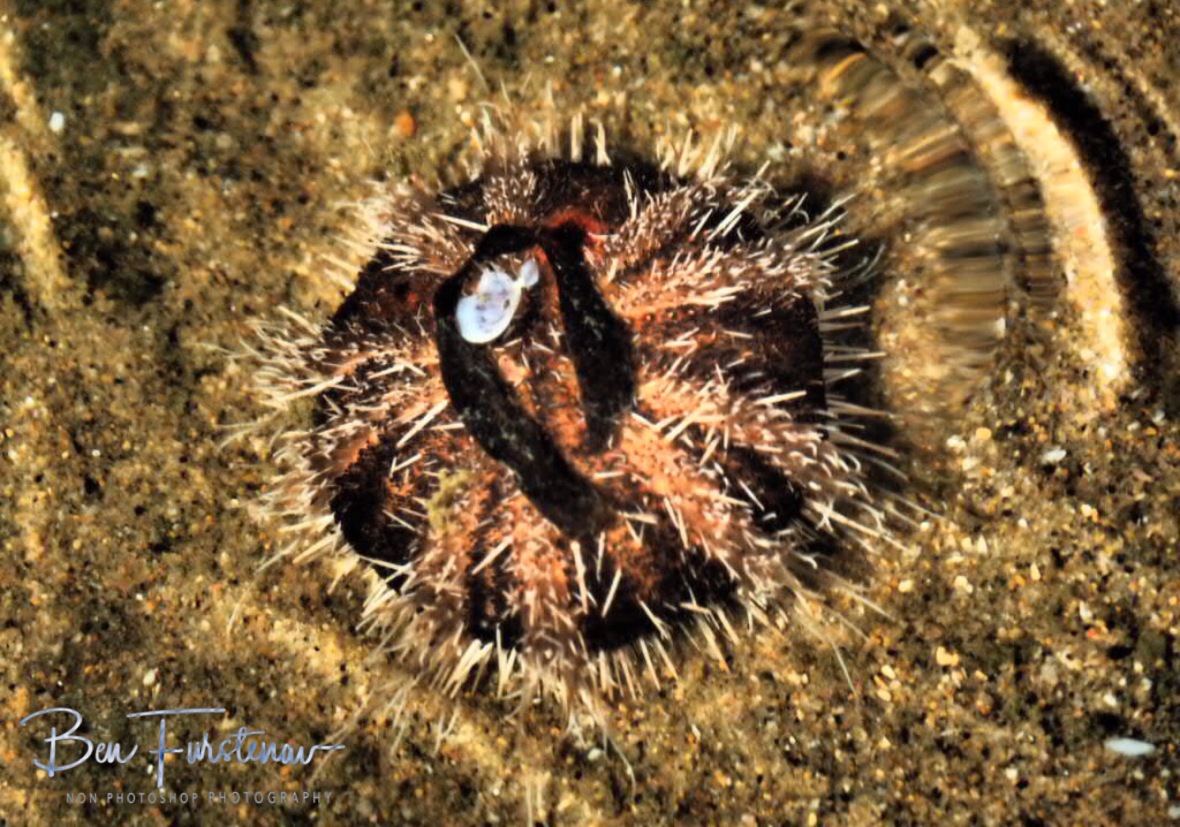 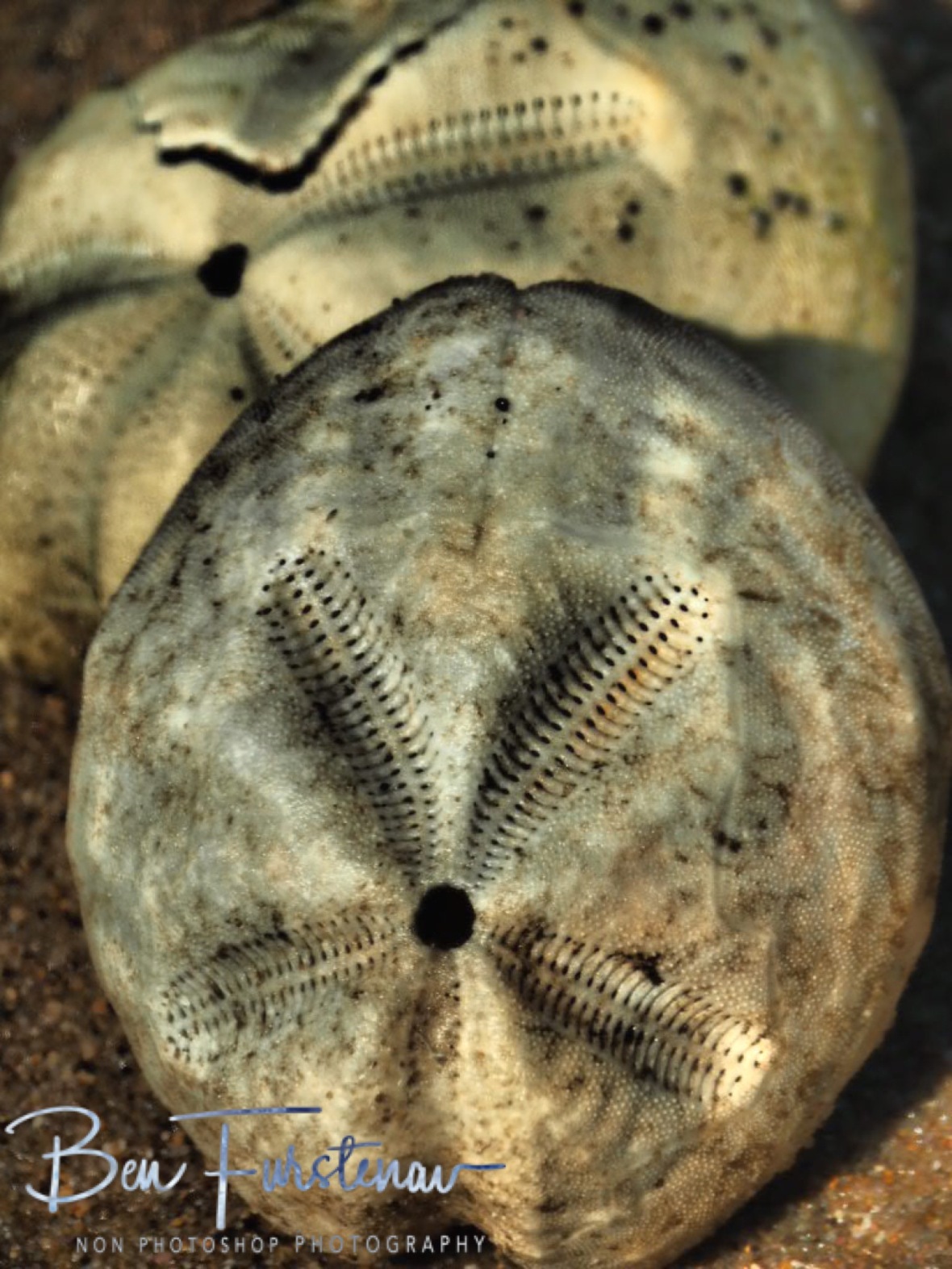 With some specimens more alive than others.

The flora was just as colourful.

It was a happy outing with lots of fun and laughter, as it had been all day. 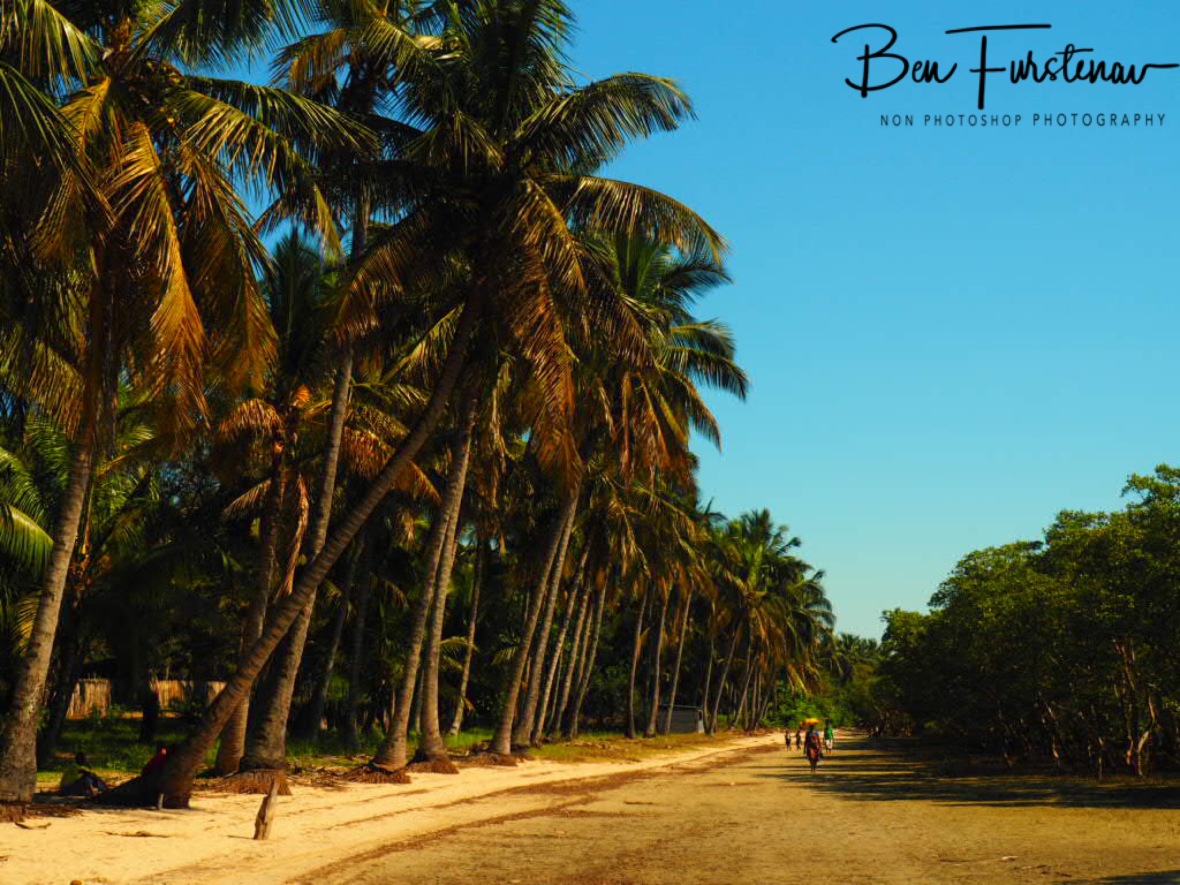 The highway between mangroves and coconut palm trees, Inhaca Island

We passed a little village along the mangrove mudflats, where coconut palm trees lined the shoreline. 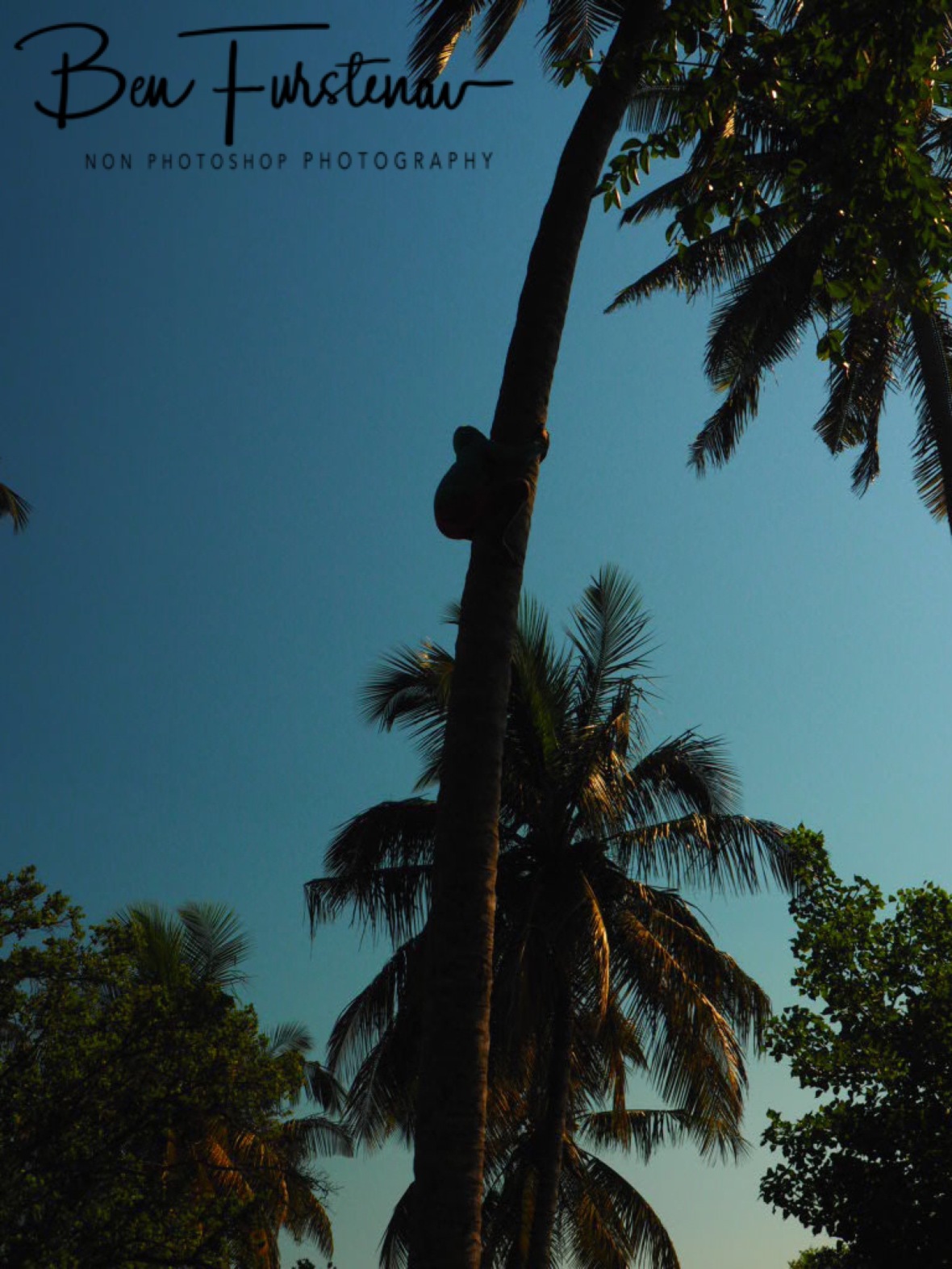 It’s a long way to the top …., Inhaca Island

One young coconut palm tree climber harvested some of the deliciously fresh coconuts. It is quite a skill to get up there without ropes.

The refreshing coconut milk was enjoyed by all, the thin layer of meat scooped out with a spoon, cut out off the coconut shell. Tasty and good for the whole body.

We made it back to Inhaca village late afternoon and ordered lunch at the newly opened ‘Tropical Restaurant’. 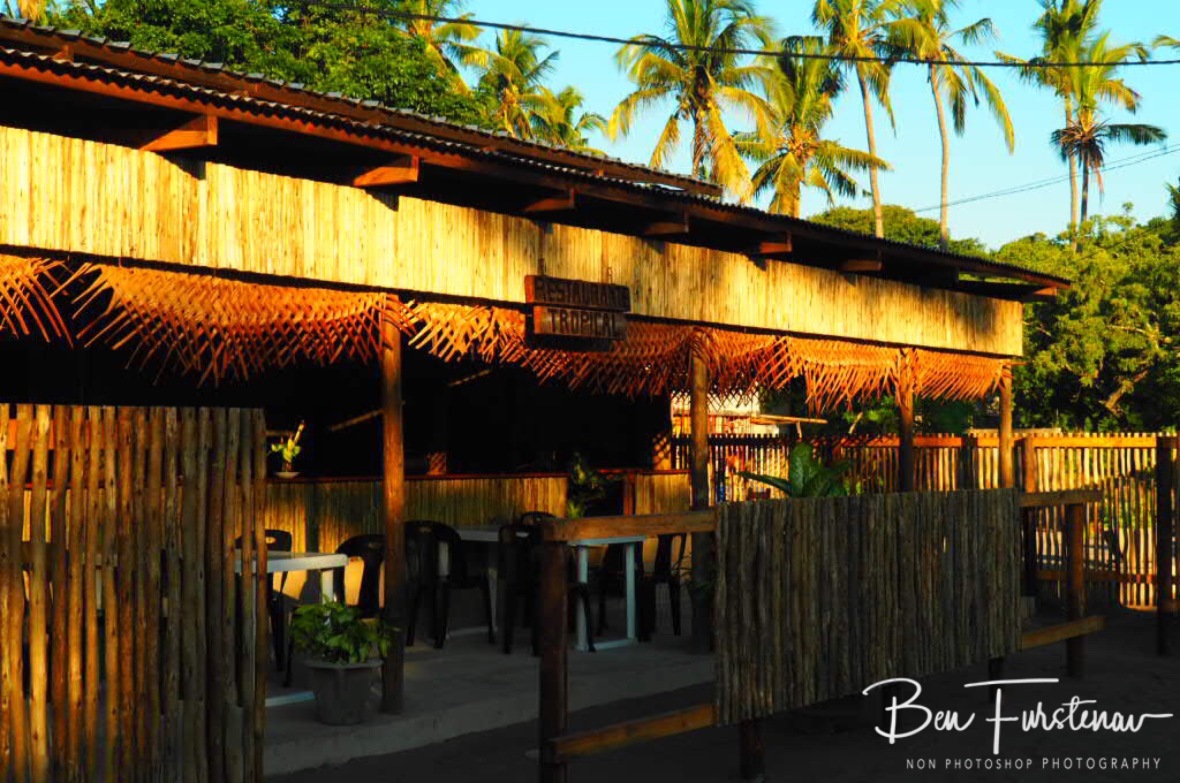 We had lots of time to get to know each other better, but when the food was served eventually, it was worth the long wait. Things don’t get done too quickly on a tropical island. 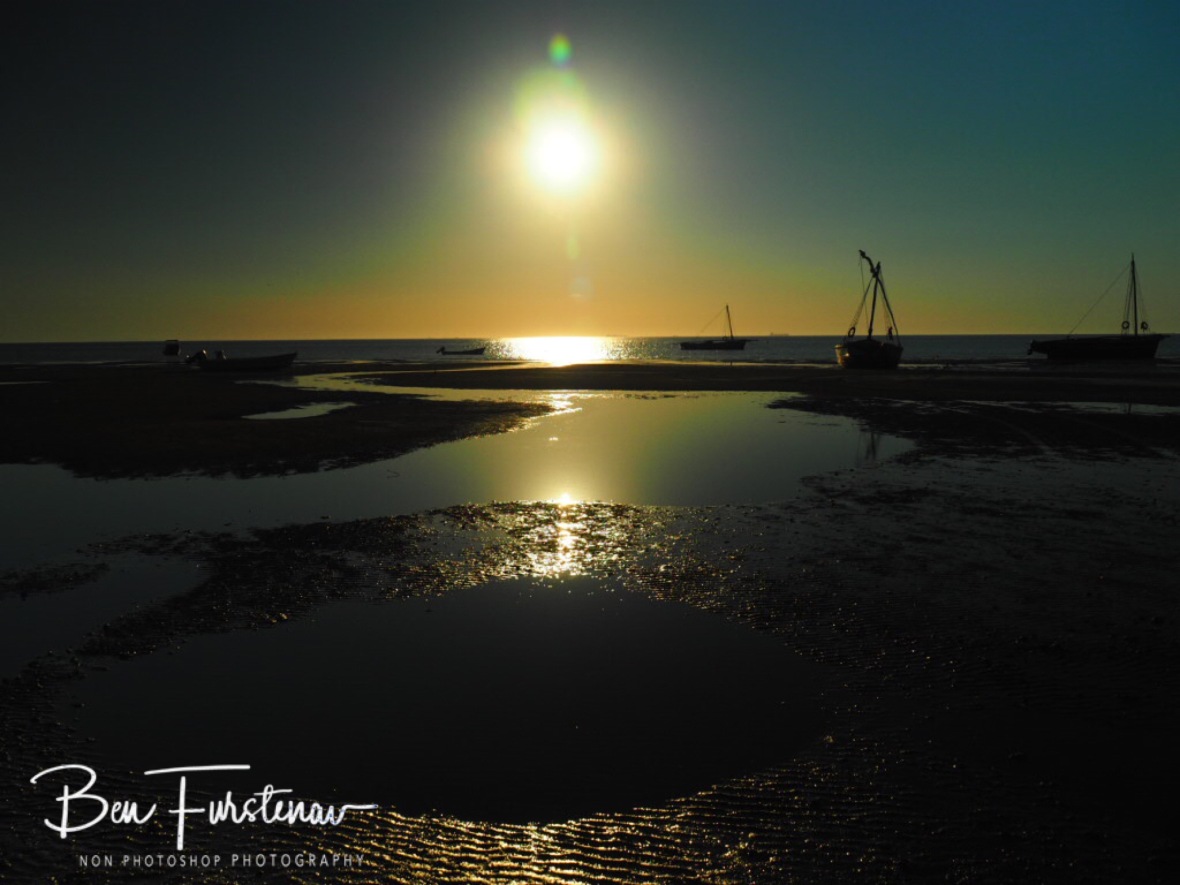 The sun was close to the setting horizon already, perfect time and perfect light for some ‘dhow’ portraits.

The shallow water pools reflected the sun rays spectacularly, I couldn’t get my hands off the photo button. Just wow.

The sun was slowly sinking behind the horizon as we made our way back. The wind had dropped off to nought, the waters were flat as.

I sat in the front of the boat whilst speeding home, gazing at waters and sun. What a way to finish this day.