The early morning roar duet was my wake up call. An immense sound to be rudely awoken to. An immense sound realizing, that I wasn’t in a bad dream. I quickly looked out of my tent windows to detect their location. The lion king moved and was about 100 meters in a western direction, towards the waterhole, lying under cover in thick bush. The second was about 50 meters north of his location, across the car track. Youngsters and females were still feasting on the carcass, which had been dragged into the nearby bushes overnight. Even their bellies were full eventually and they moved into the shade. They were in play mode, but couldn’t really move too much with their fat bellies. 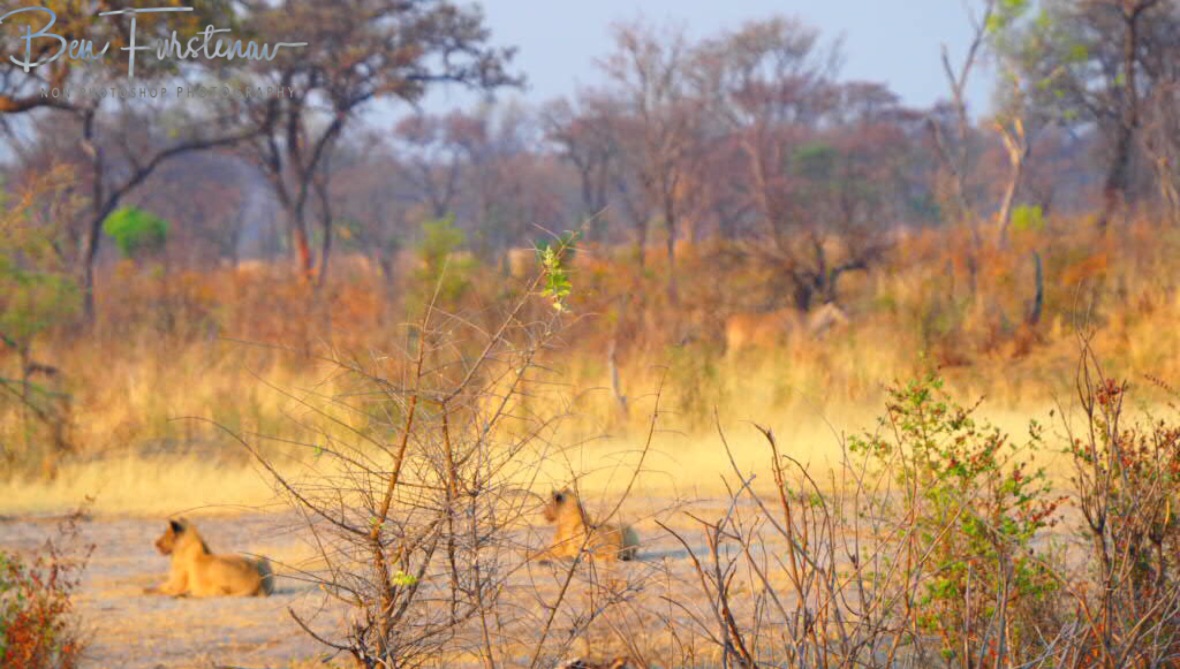 The young ones were ready to pounce the Eland in thick bush, Khaudum National Park, Namibia

A single Eland bull passed through the thick bush shortly after. This could be interesting. The young ones went straight in stalking position, ready to pounce. 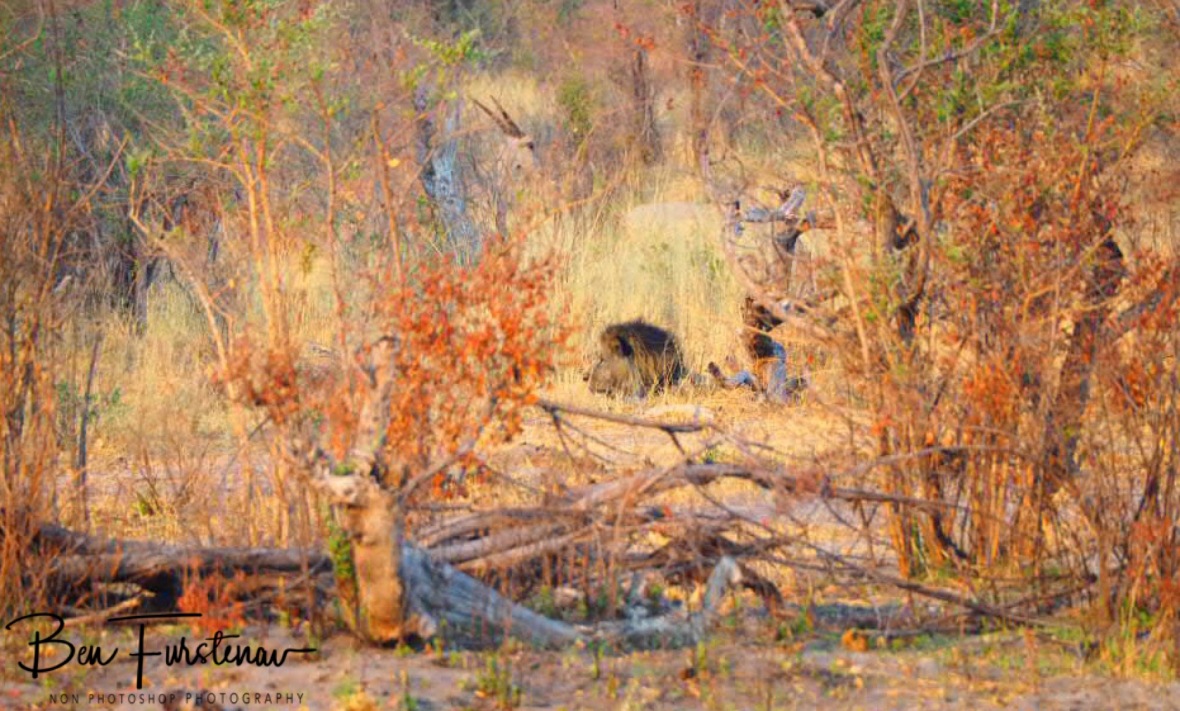 The Eland passed the well-camouflaged lion king within easy striking distance. He wasn’t interested at all. Well, that is as seen from my position, not from the Elands point of view. Even though the Eland is the largest African Antilope, an opportunity like this would be hardly missed on hungry terms. 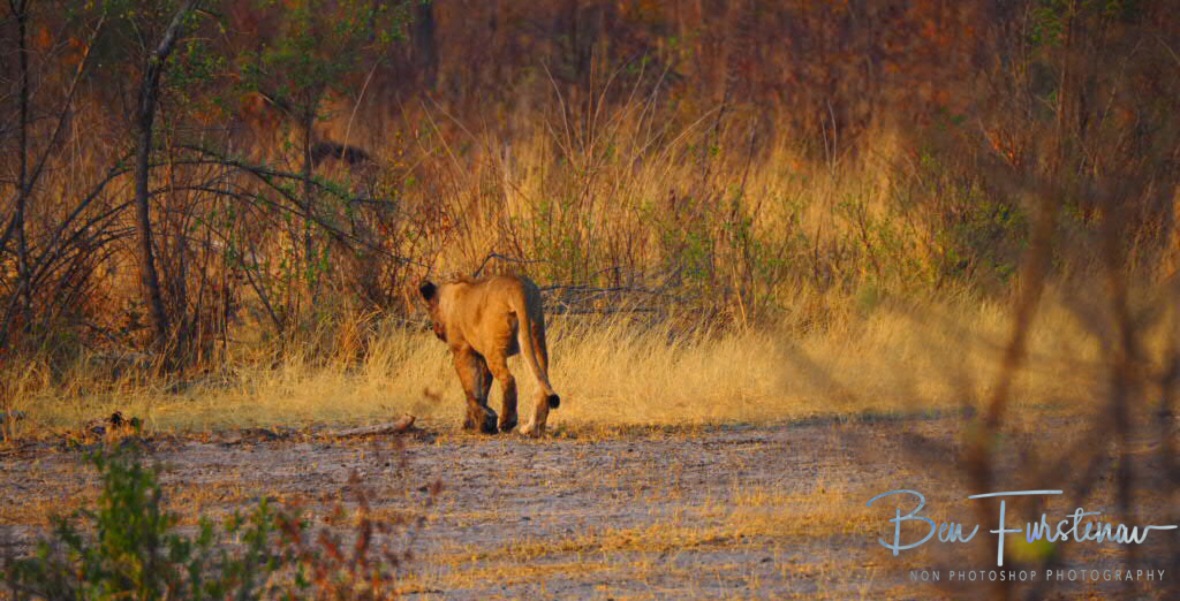 The lionesses and young ones moved south into thick bush. 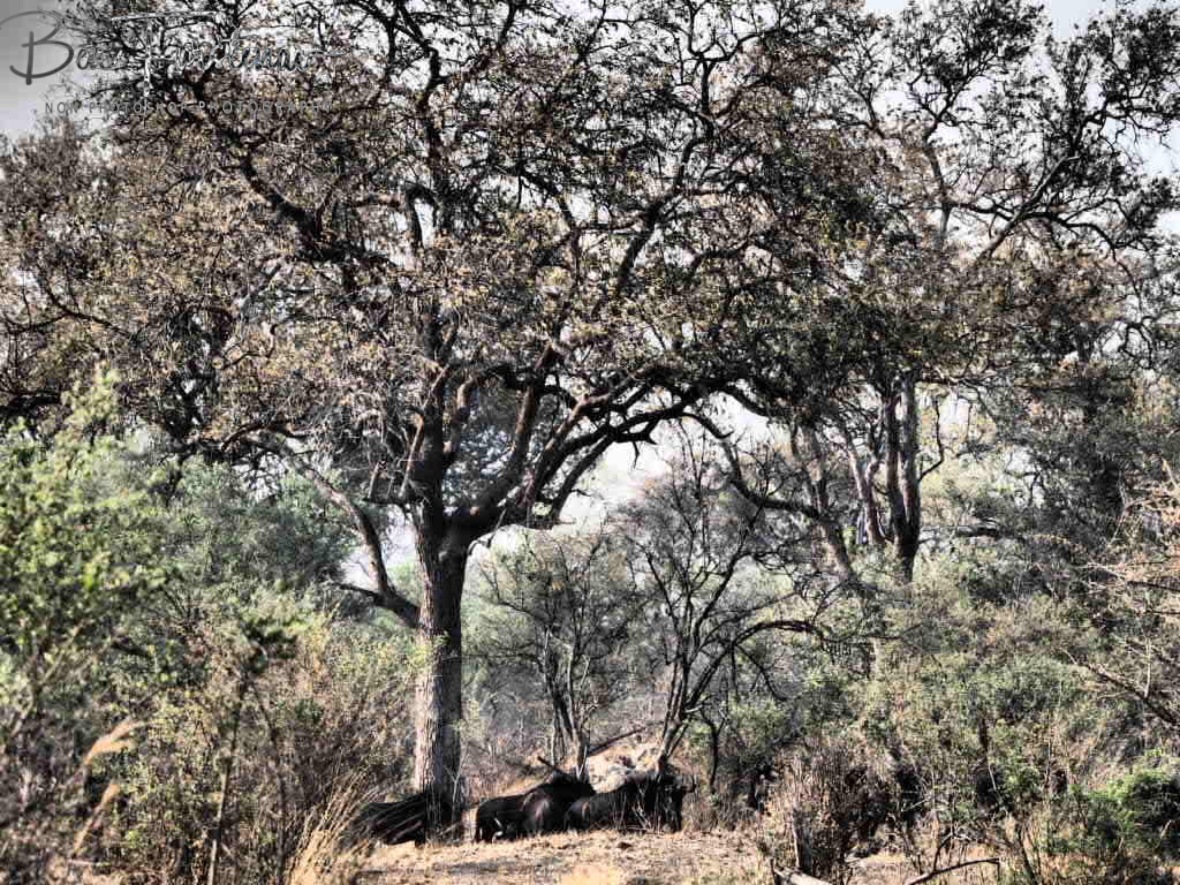 A herd off wildebeest showed up shortly after, standing under the same tree the two lion kings were resting yesterday. They were more confused about Zimba then the lions, which they probably didn’t detect. This showed me two facts. One was the new location of the lions, as well as their willingness to hunt on a full stomach.

The lion king on the move, Khaudum National Park, Namibia

The lion king laid in the shade for a while longer, before he moved on as well. Rather sluggish and slow, he appeared to follow his pride and joy. 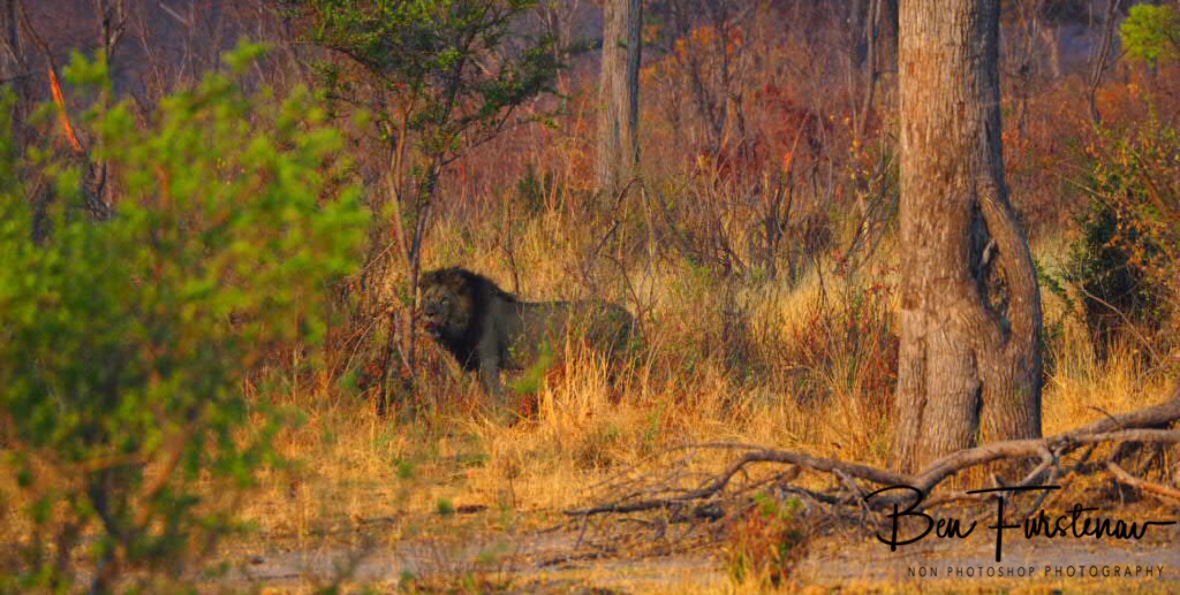 He gave me one last warning look as if he was to say; ‘We’re going! And when we come back, you better be gone!’ 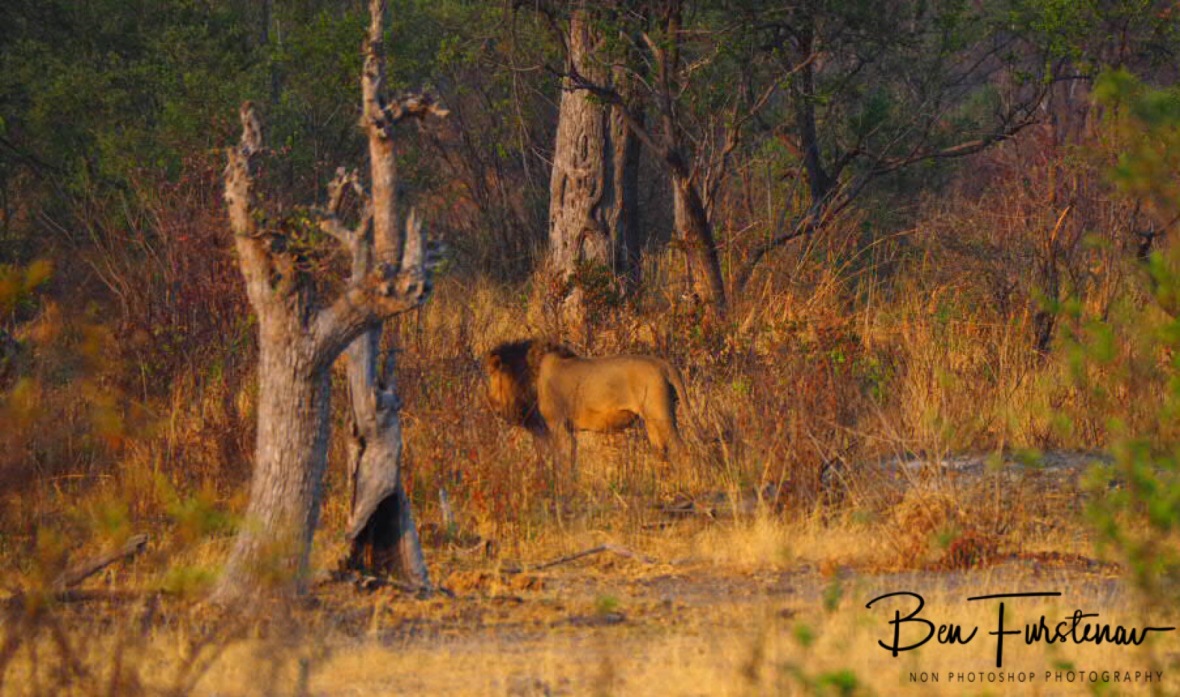 Latest by then, I realized, that I wasn’t only possible prey, but also an intruder to his kingdom. A possible challenger that marked his territory around Zimba in human ways and waste. This is not a good sign either. Seeing them walking off could have been a good opportunity to walk back to the waterhole. It could have been a trap too. A risk I wouldn’t take just yet, a risk I wasn’t quite prepared too. I needed more time to study this lions pride behaviour and their favourite hiding and resting spots. But if the Rangers won’t come by this afternoon, then I would have to walk through this lion kingdom by tomorrow. I still had enough food and water but would become an increasing target as time went by. Most importantly, I had to prepare myself mentally and physically for my possible last and longest mile to walk. 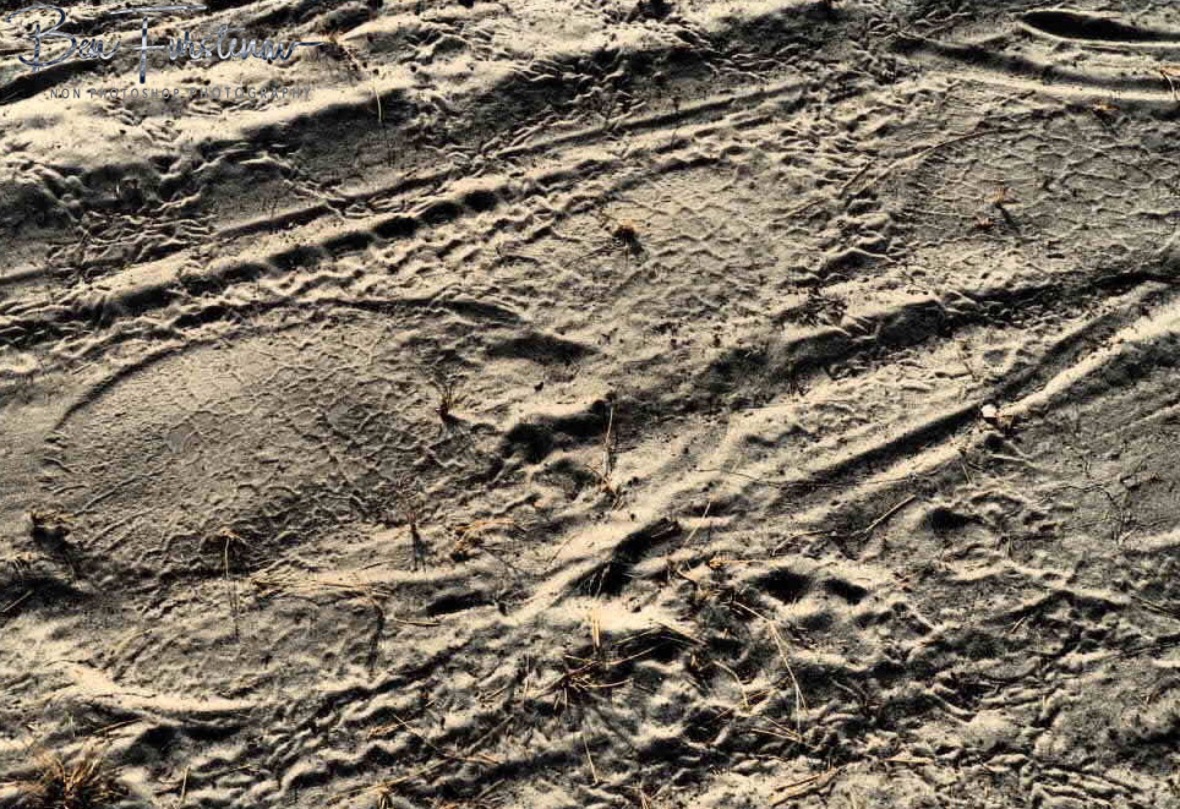 The lion and elephant footprints showed how nearly they passed Zimba. 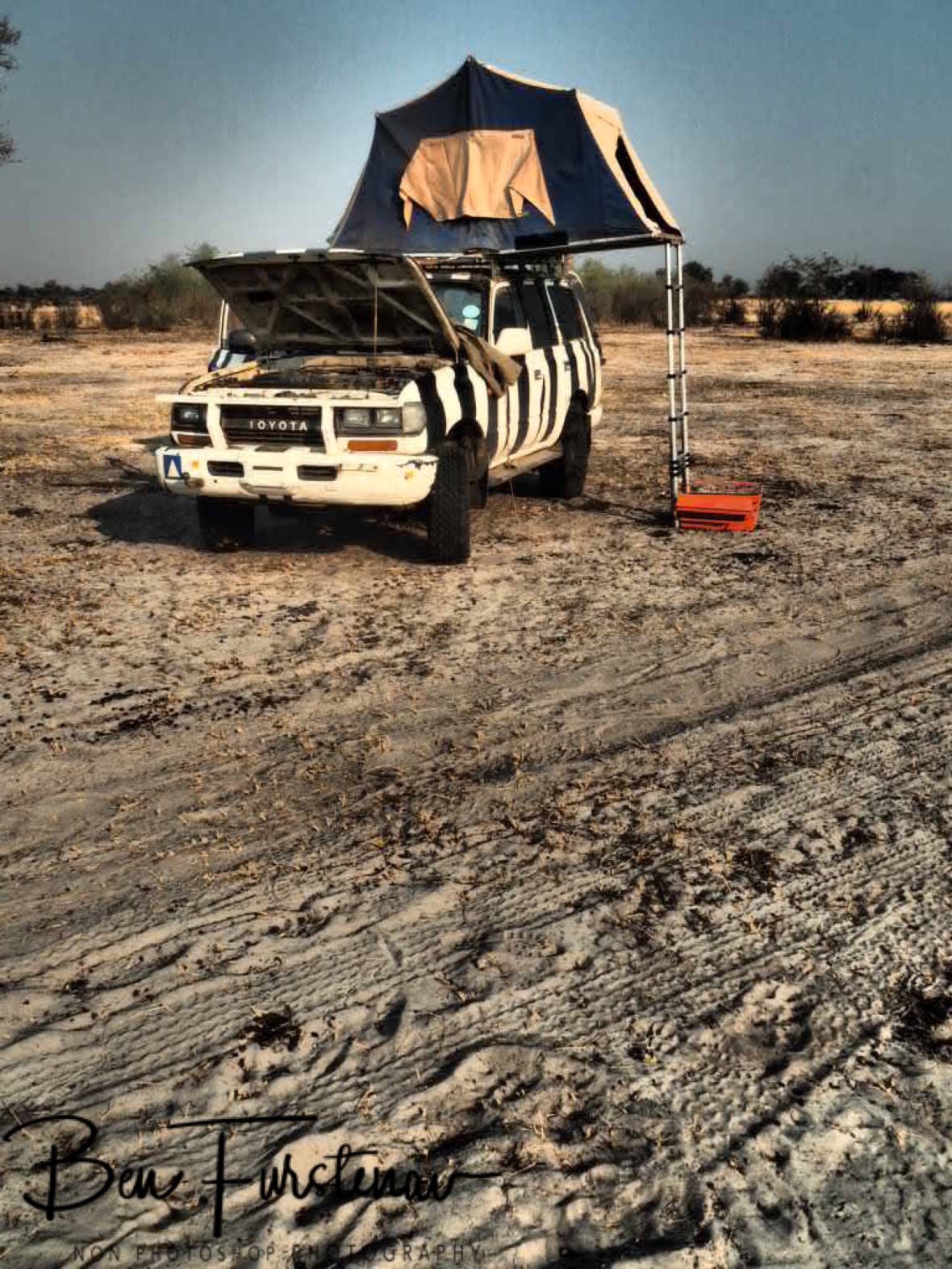 I investigated the elephant carcass, which had been dragged 5 meters into nearby bushes. Possibly to keep it out of sight from other predators and scavengers. I was very surprised not to see a jackal or any hyenas. Even the local vulture squadron at nearby ‘Tsau Waterhole’ wasn’t seen. No one wants to take on the lion king. I had no other choice. There was still some meat left on the carcass, but most had been devoured. If the lion pride returns sometime later, there won’t be much left of this poor elephant.

I would become a hunting target by tomorrow unless another animal had been successfully hunted. My time was running out, by tomorrow I would have to take actions. The lions weren’t seen all afternoon, it was scorching hot. Only the gusty southeasterly winds kept my cool. The negative point on the strong winds was that I couldn’t light a warning fire to raise awareness. The risk of a major fire blaze was too high, putting many lives in danger. These weren’t fair odds. The wind settles around sunset, but that would not be the time or place to be too far away from Zimba. I used my 600 mm camera zoom lens to check for movement in bush and grassland around me. 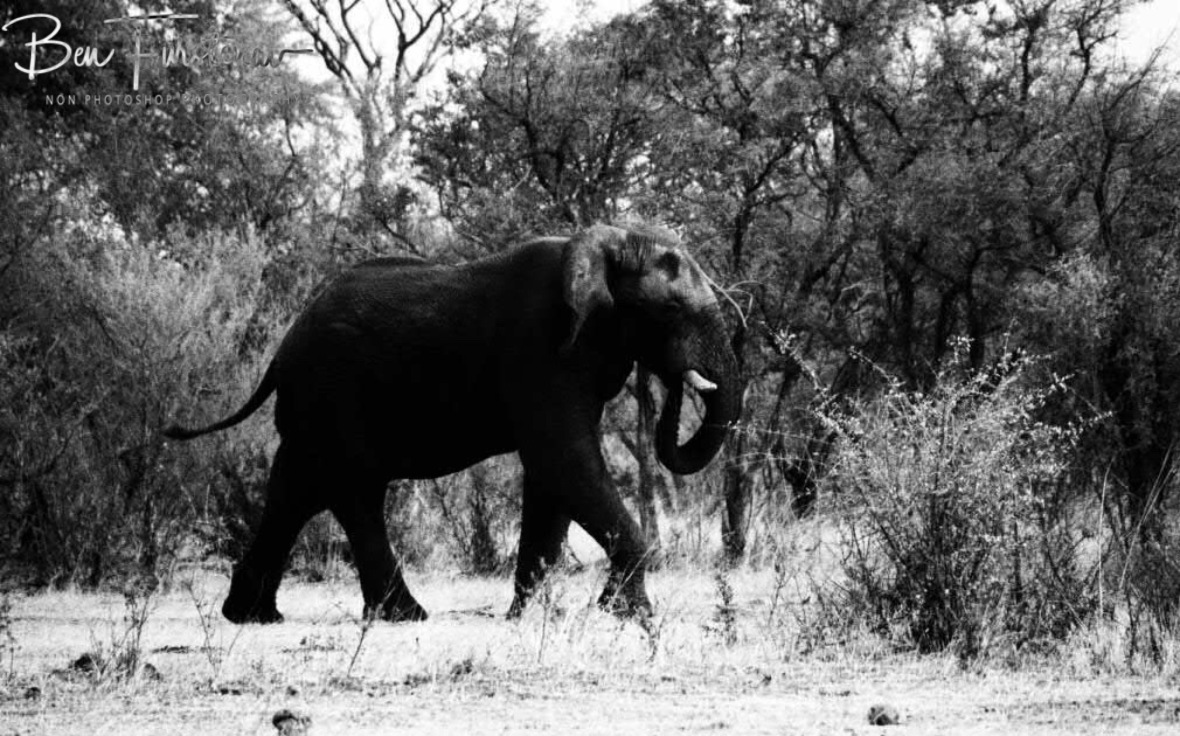 An elephant passed by. 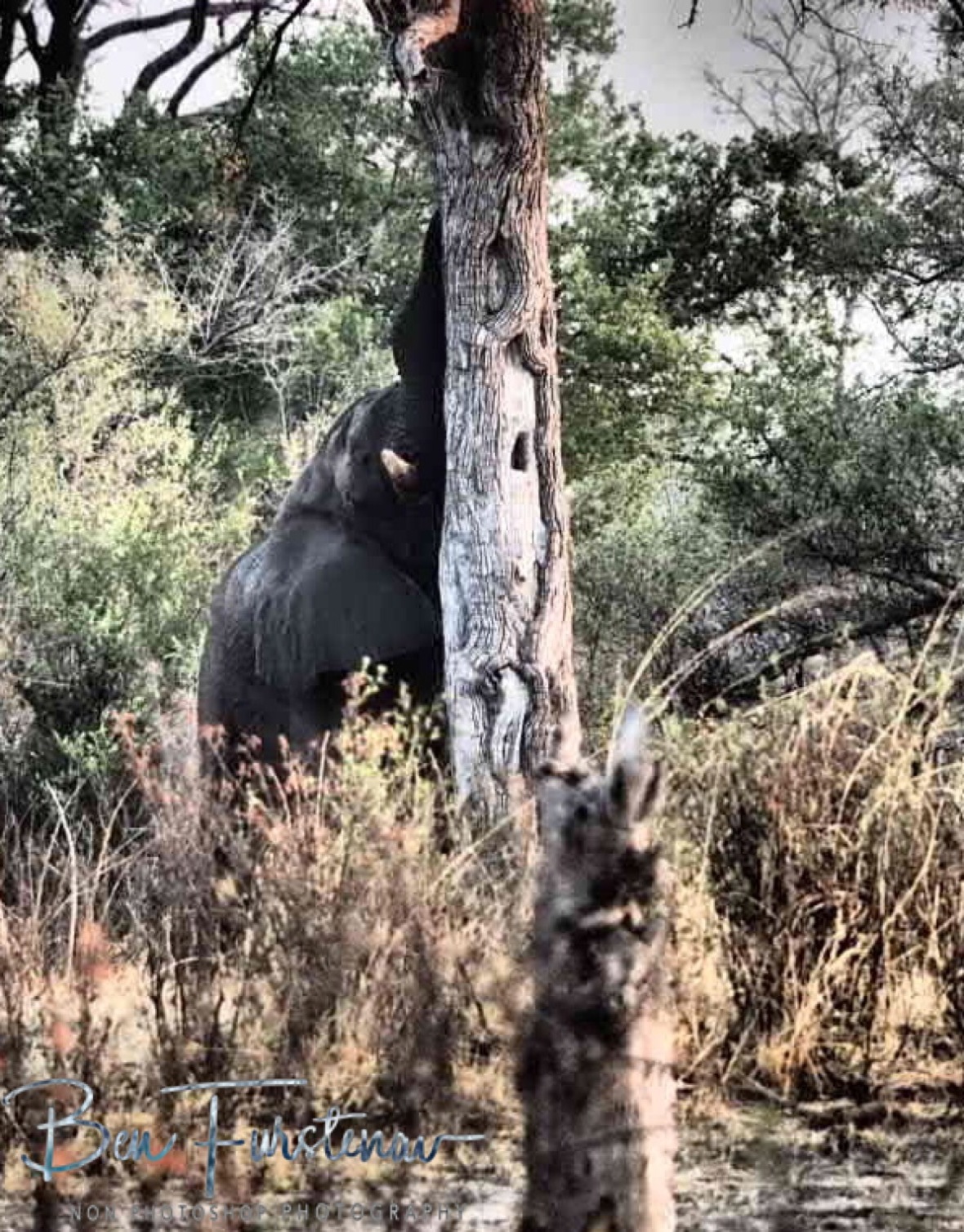 Nothing like a good tree rub, Khaudum National Park, Namibia

He enjoyed scratching this tree. In fact, a few elephants passed by. I was hoping for a larger herd to walk by, which I could have used as a covering walking wall. Most larger herds appeared to be west from the waterhole. I would be too.

I stared at the black feather I picked up yesterday. Maybe it wasn’t such a good idea to keep it after all. In desperate times like these, any bit off hope gives confidence. I released it into the strong winds and watched it float away. Around 5 pm, as the sun loses some of its strength I sat on Zimba’s bonnet and enjoyed the tranquility. The lions were still not to be seen and I was wondering if they would return. 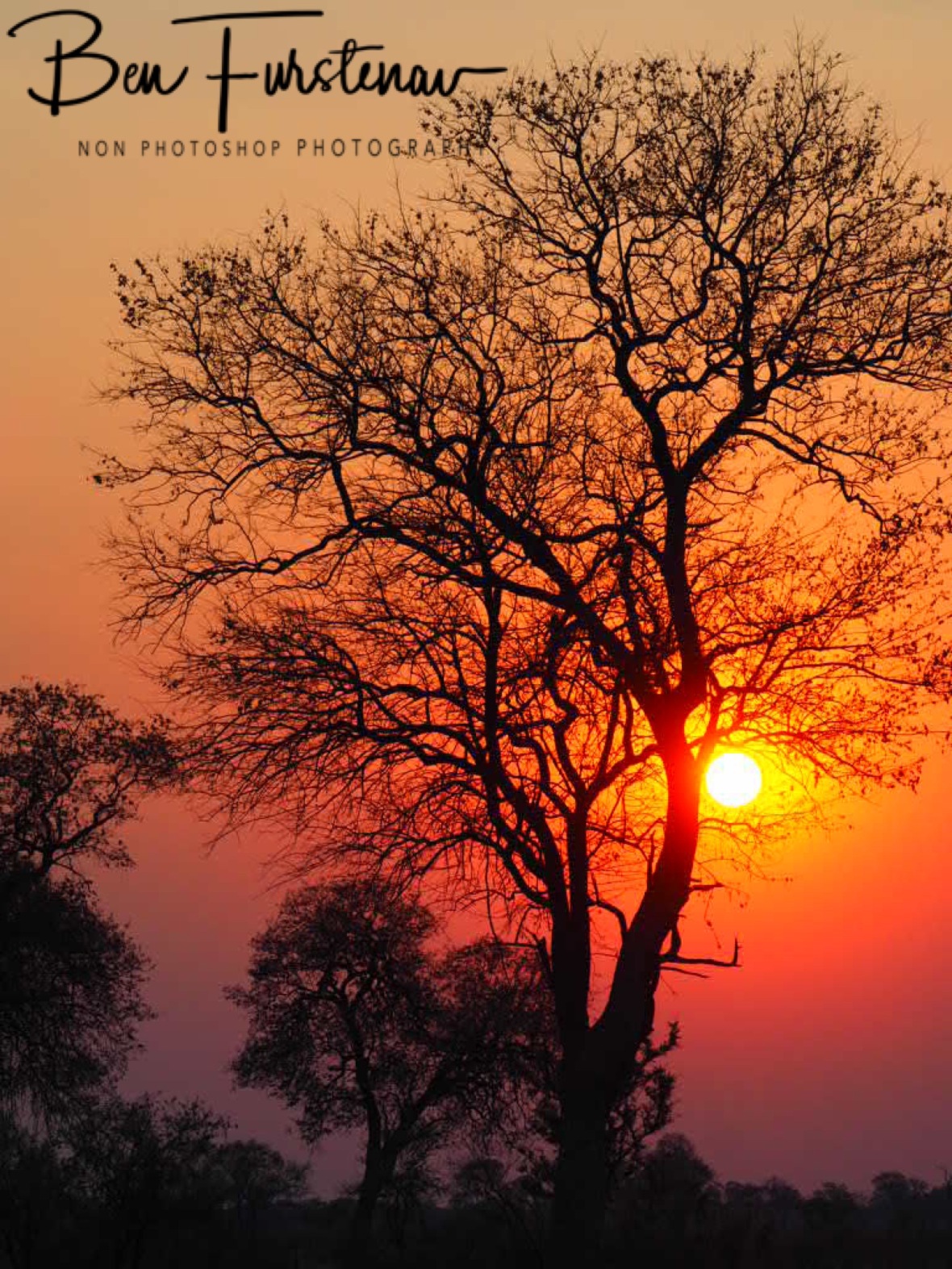 I watched the sun slowly sinking behind the ‘False Mopane’ trees, this is Kalahari magic. 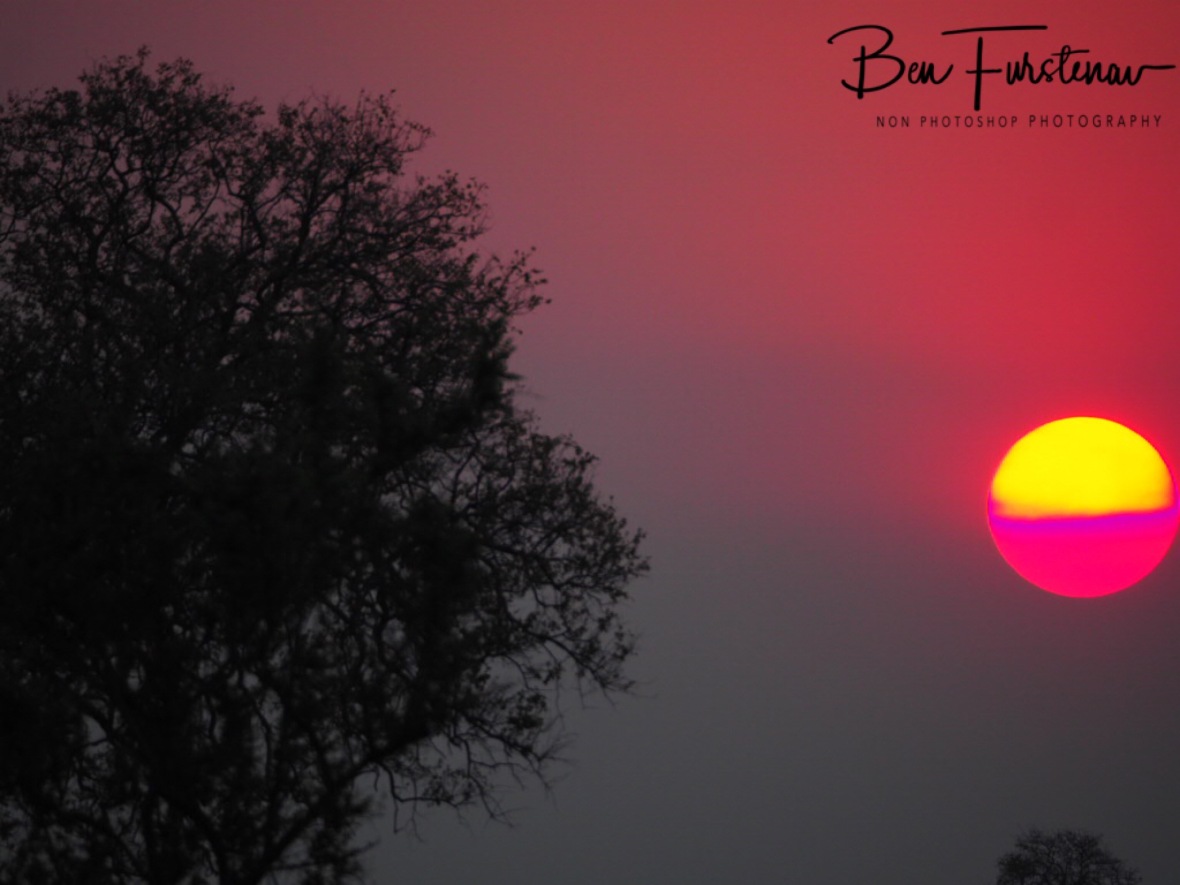 The yellow ball turned blue, and then purple. 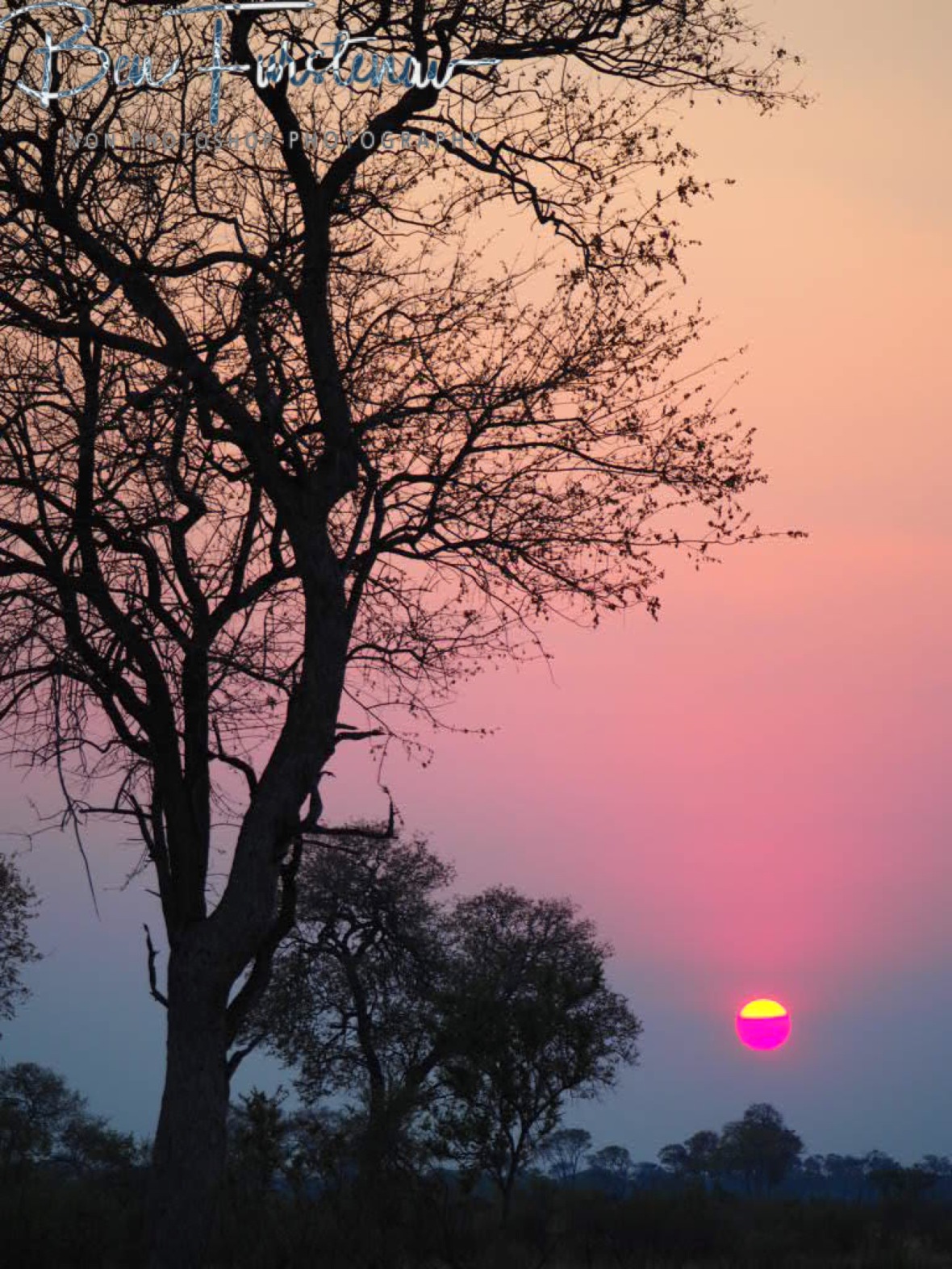 Spectacular is an understatement. No rangers arrived today either, tomorrow will be my do or die day, literally.

I poured myself a Gin and Tonic and just enjoyed this tranquil moment. I jokingly asked Zimba about our chances to get out of here. Silly thoughts one gets in desperate measures. 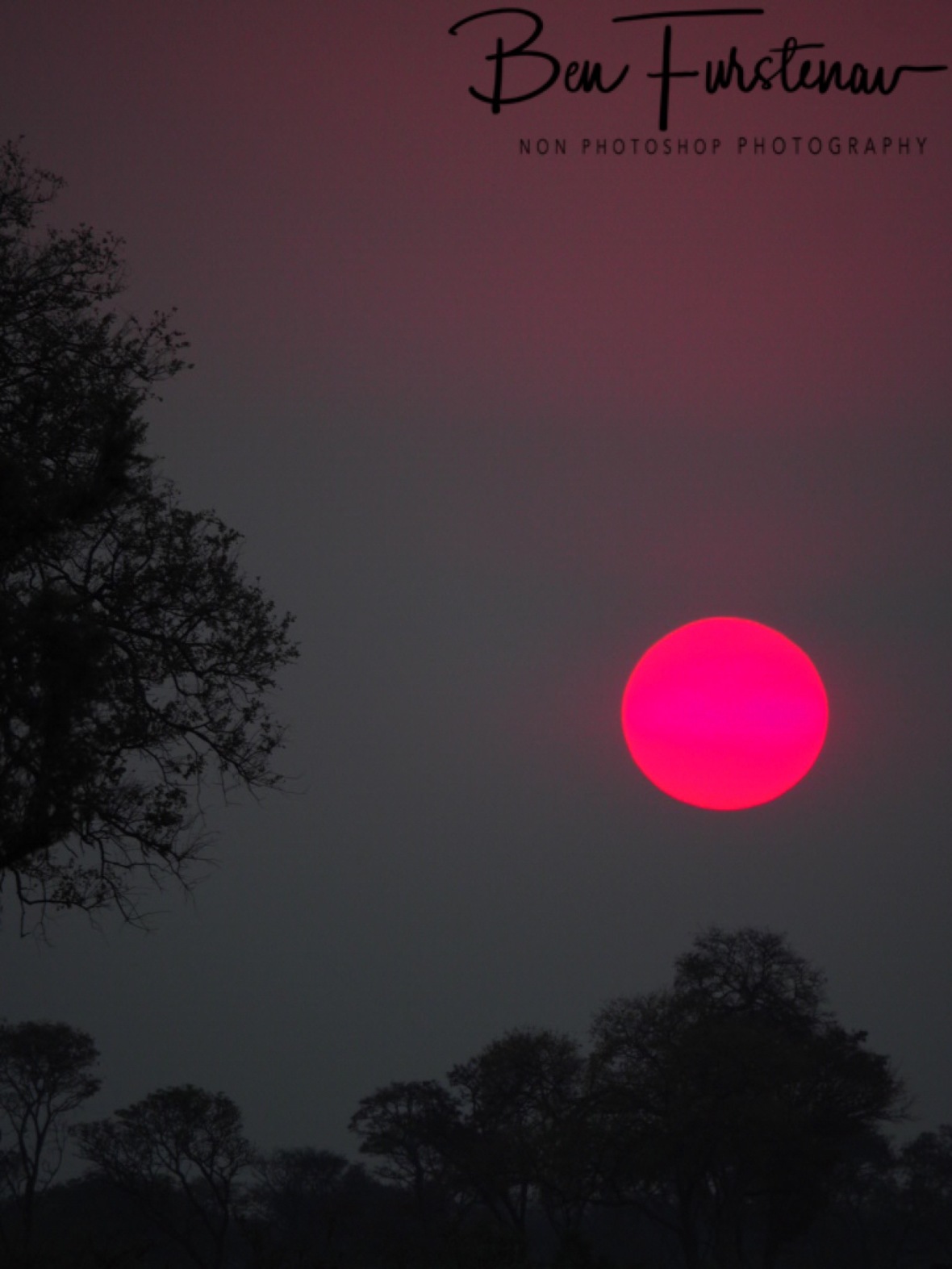 The moon had already risen as the sun was just about to disappear over the horizon. This is not the time to be sitting outside. 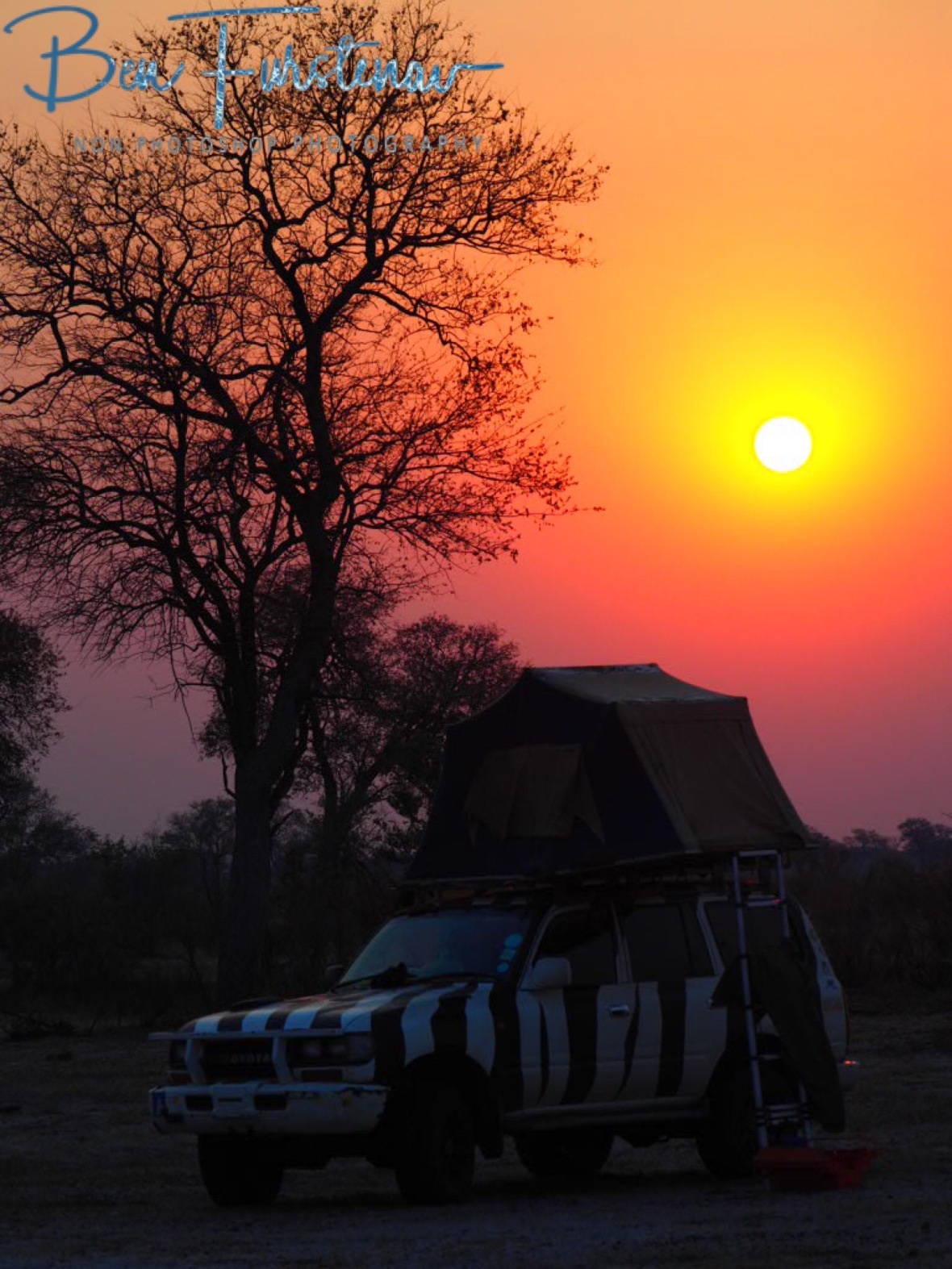 I lifted Zimba’s bonnet up once more and made my way upstairs. Shortly after the sun disappeared on the horizon, the lion pride returned. Subconsciously, I was hoping they would have walked miles from here. However, now I know their location and that they would come back here every night. At least until all meat from the elephant was eaten. The moonlight was to low for photography, but bright enough to watch the lions feasting on the carcass through my fly screen. It was the same scenario as last night.

The youngsters weren’t as hungry this time or understood quicker not to interrupt their father’s meal. They were lying quite comfortably not far from my tent with their mothers. The lioness were watching movements in nearby bushes, they were in hunting mode. This was a worrying sign. I had to scare them off or try at least.  I was busting for a wee. I unzipped the tent fly with an almighty roar which scared the shite out of these big cats. That was the reaction I hoped for. I marked my territory from Zimba’s roof, feeling like a lion king myself. I listened to the lions feeding as I slowly fell asleep. The lion kings roaring concert was herd sometime later during the night. They weren’t as close as yesterday.