Windhoek in the 70’ies, Namibia

Windhoek, Namibia’s capital, always had a special place in my soul. Being my city of birth and spending the first 8 years of my life here, I have some very fond memories of our upbringing.

Not having revisited this desert metropole in 42 years, I was a touch anxious driving along ‘Kaiserstraat’, now called Independence Avenue. I wasn’t foolish enough to expect the same city from what I remember being a toddler. Times had changed, Independence freed the young nation from German colonial grips and South African dependency in 1990. Modern technology and lifestyle wouldn’t stop marching forward even here. Windhoek gets its ‘Afrikaanse’ name from ‘windy corner’ and lies almost central in Namibia in the ‘Khomas Highlands’ at 1700 m elevation. Due to its unfavourable geographical location and violent human intervention over the years, the city’s progress haltered to many standstills.

The ‘Alte Feste’, or old fortress, was the stronghold of the German ‘Schutz Truppe’ (Peacekeeping force).

The ‘Reiterdenkmal’, or ‘Equestrian Monument’ is a proud reminder of the ‘Schutztruppe’s’ victory over the ‘Nama’ and ‘Herero’ tribes, bringing ‘peace’ to then ‘German Southwest Africa’.

Meanwhile, the ‘Reiterdenkmal’ has been relocated into the ‘Alte Feste’, which now serves as a museum for Namibia’s violent and intriguing past. Not only has the proud horseback rider been locked into his own colonial past, but has been replaced by a rather drastic, macabre in my mind, monument.

No one could misinterpret this clear message.

Even old cannons had been removed back in the fortress. One can never be sure enough. The ‘Alte Feste’ underwent renovations and was closed to the public.

If there is something I clearly remember about Windhoek, it is the palm trees lining the streets. An easy give away to recognise Namibia’s capital city. 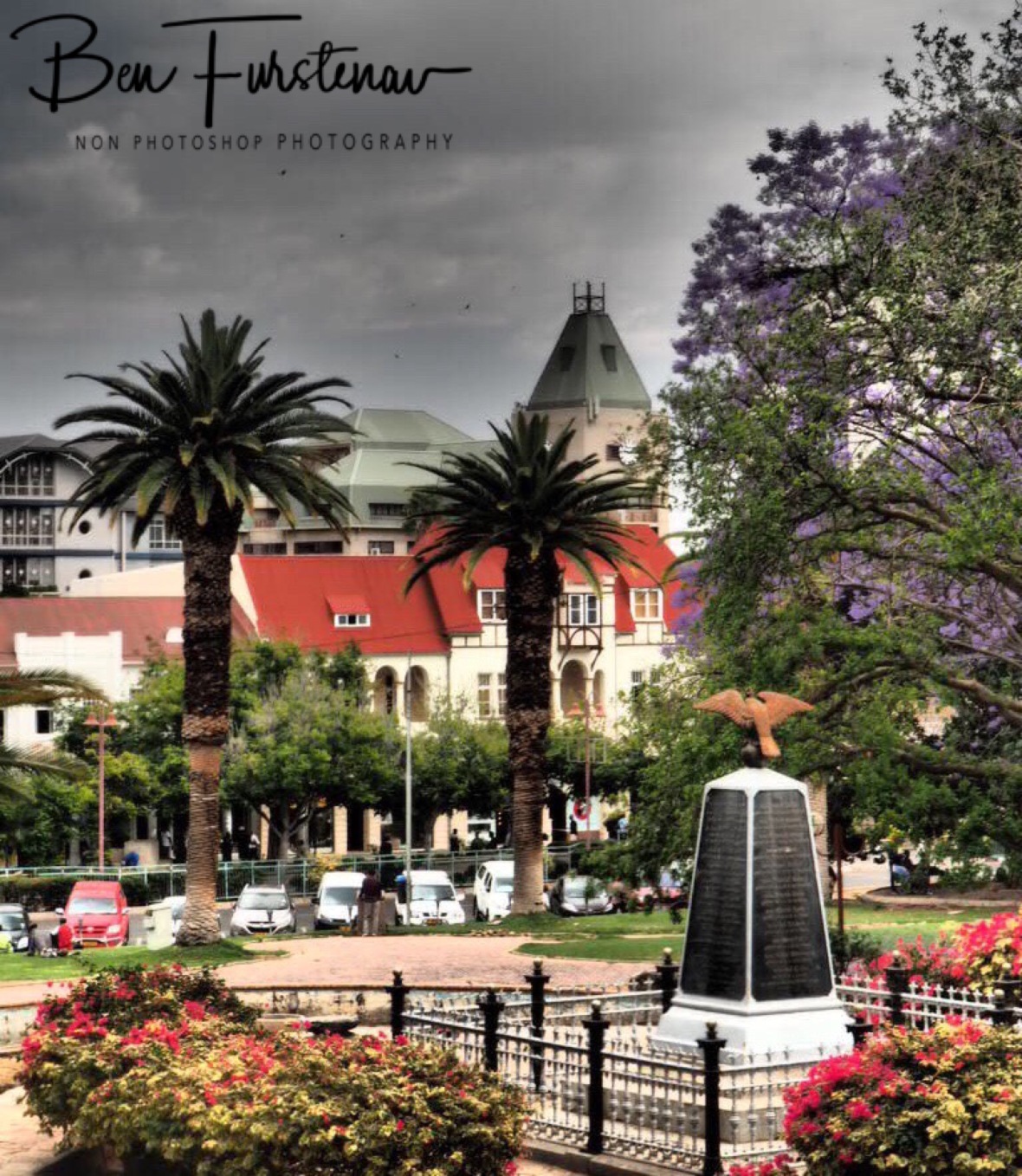 Christuskirche in the 70’ies, Windhoek, Namibia

The ‘Christuskirche’ being one of the highlights which I do remember surprisingly well.

A photographic highlight in Windhoek, Namibia

This church is located just in front of the ‘Tintenpalast’ (Ink Palace),

from where the city centre spreads out to its suburbs.

Part of the ‘Old Town’ is the colonial train station building.

Things were a bit different then, Windhoek, Namibia

This was an important train traffic station throughout most of the 1900’s. Goods from the African inland were transported to and from Walvis Bay, Namibia’s biggest port and harbour city.

These glory days are long gone.

Convent of the Holy Cross in Windhoek, Namibia

Right on Independence Avenue lies the ‘Convent of the Holy Cross’, which is undergoing some serious renovations. Well, this is where I was presented my lolly bag for my first day of school.

Wearing a strict school uniform, the holy teaching sisters taught my brother and me the ABC. Standing in line in the courtyard, singing the South Western anthem is an everlasting memory. Although, I can’t remember the anthem.

My younger sister was too young to go to school back then.

I chose to stay in a Backpackers/ Campground on ‘John-Meinert Straße’. Reason being is that not far from here, on this very same street, I grew up.

A fairly large property which included a townhouse, big enough to host the whole family.

We had a large garden which gave us 3 youngsters plenty of space to play.

We never ran out off ideas to keep us entertained and occupied.

Our Boxer dogs were never short of attention

and most times within the mix off activities.

Our reasonable sized swimming pool hosted plenty of birthday parties. The fence was built to keep our playful dogs out.

Such joyful times. Lots of great memories. I couldn’t and didn’t understand then why we had to leave.

For obvious reasons, I didn’t want that happening.

However, it wasn’t my choice and us kids possibly had a better upbringing and education in Europe. The property doesn’t look anything like it used to be nowadays, I was secretly hoping that it would. Urban lifestyle anchored here as well as anywhere else in Windhoek. With a little glimpse of the past, it is time to look forward again.

I met young but independent mothers Jackie and Yolandi at the Backpackers. Both had their fair share of life’s tragedies, both are hoping for a prosperous future.

The start of an amusing night, Windhoek, Namibia

A casual chat turned in to an entertaining evening, beer and braai included. Like any other capital city in Africa, Windhoek deals with modern and social problems. Not tonight though.

2 thoughts on “A Step back in Time, Windhoek, Namibia”