These dams can run way low at times, often get to a critical stage. However, playing with water can have the opposite effect as well. The summer of 2010/2011 experienced a very wet season and dam levels were at maximum capacity. A tropical cyclone made its way down the east coast and dumped even more water. High altitude townships like Toowoomba experienced flash floods, people and cars were washed away by a raging torrent. Having no other choice, the dams needed to be opened before dam walls would break. 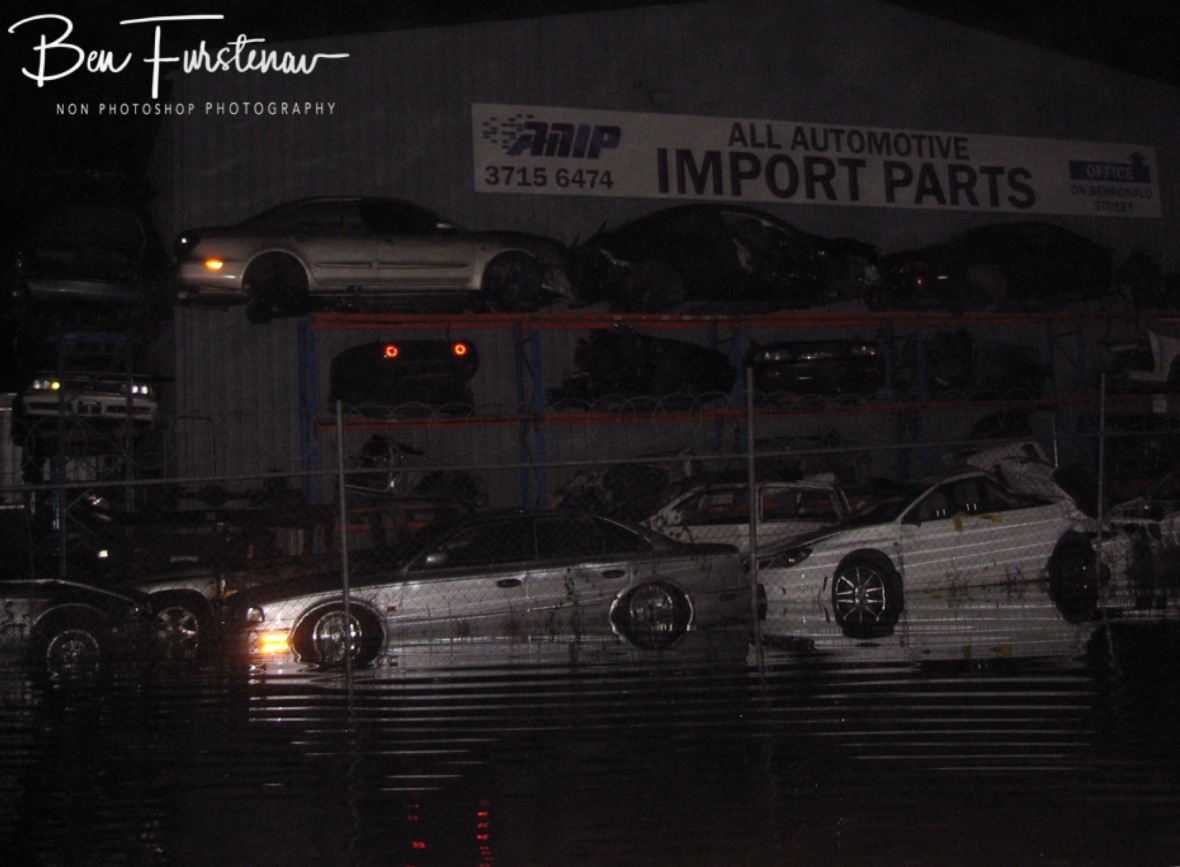 The waters released rushed through the Brisbane River and flooded low lying properties along its banks. Full moon tidal movement pushed the already flooded plains to major devastation. Brisbane was inundated. Many people lost their homes and valuables to river sludge, a million dollar damage was caused within a few days. I remember those scenes as they were yesterday.

I didn’t loose any valuables, only my job. News reports warned for major flooding, but weren’t exact on how big the proposed inundated area would be. At least, I didn’t receive that information.

My boss and owner at ‘King of Cakes’ had no idea either and rather spent time with his young girlfriend at the Gold Coast. It was a surreal scenario in all imaginable ways. 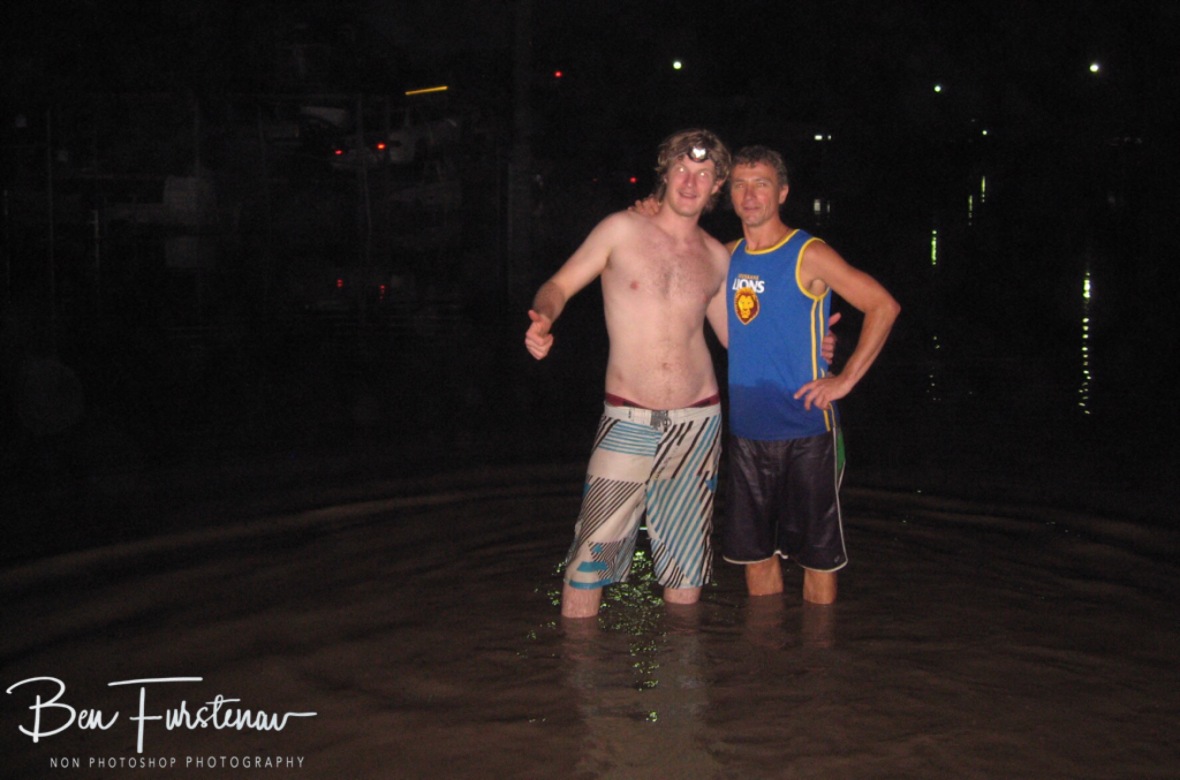 Me and then apprentice and owners son in Brisbane, Queensland, Australia

I went to work as usual and noticed the nearby creek slowly rising. At some stage, I told my co workers to evacuate the premises. Troopy has an air snorkel for a reason and we got away just in time. The unreal part was that it was eerie calm and it wasn’t raining. Yet, the water rose to extreme levels. Boats and even houses were washed off with flood waters down the Brisbane River. Scenes that made headlines around the globe. Suncorp Stadium became a water polo pitch. The extremes couldn’t be more obvious. 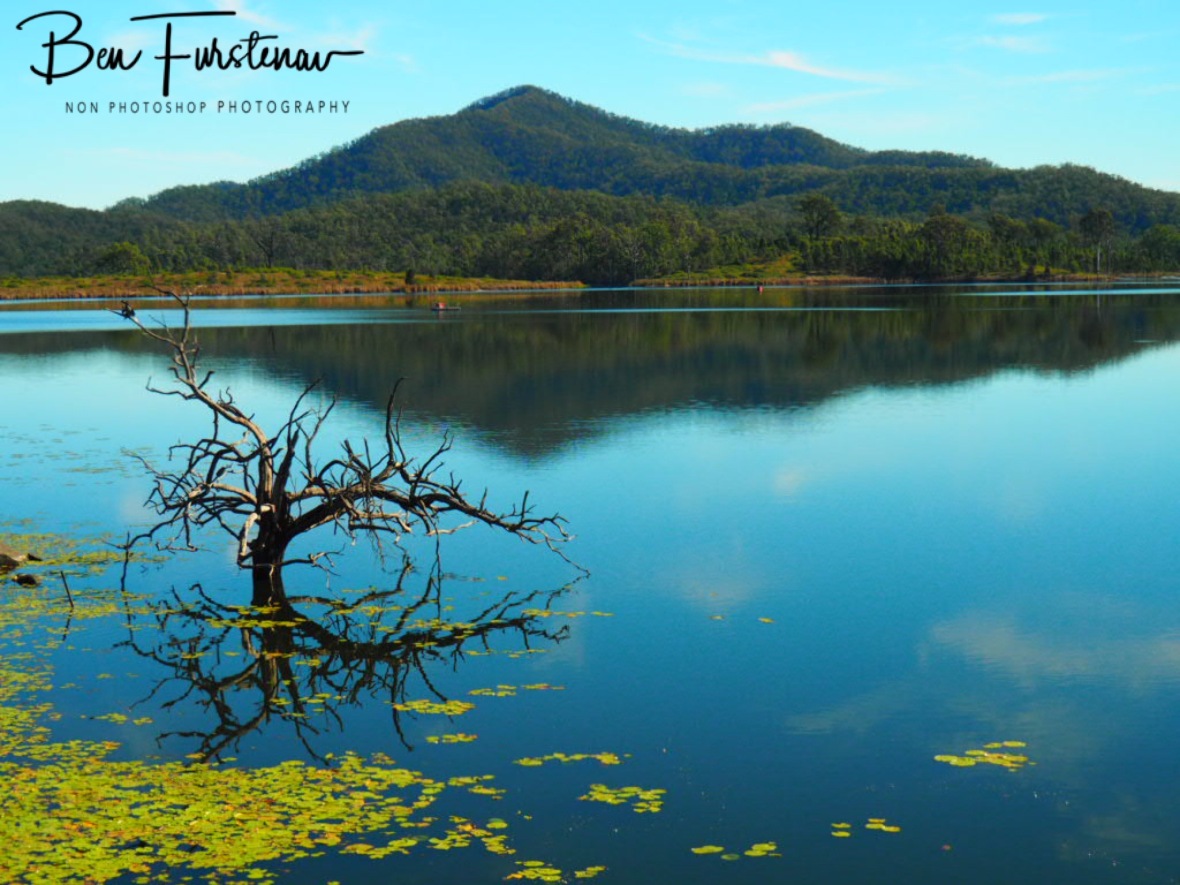 Driving by Late Wyaralong, there were no signs of floods today. In fact, it was an extremely calm and sunny day. The lake acted as an oversized mirror, reflecting the eastern mountain range in style.

Flooded trees looked like scurry creates within the waters edge.

Cormorants used them to dry off, before diving back in to the water. And there is always at least one pelican.

This one looked like a remote control sailboat, heading out to sea.

Lake Ivanhoe links up with Lake Somerset. I know this area quite well too. I used to work in Kilcoy on the northern edge of Somerset Dam when I returned to Australia in 2008. This didn’t work out well either. However, there are some fantastic photography options, particularly on days like today.

As the sun was setting lower, the flooded timbers reflected in ever longer shadows. An underwater tree graveyard as it appears.

Cormorants and other birdlife use these for drying, resting and nesting.

Ducks are scurrying the edges like being on a sunset cruise.

And off course, a sole pelican made his rounds through the array of waterlogged trees.

A blissful afternoon came to an end with the last sun rays disappearing behind the clouds. The reflections of the clouds were impressive by themselves.

A peaceful end to a blissful day at Lake Somerset, Queensland, Australia

A trip down memory lane, memories I rather not had.