Due to lack of space on the ferry to isle Saint Marie, I traveled alone, via taxi Brousse to Soanierana Ivango. Ninah made sure that I sat upfront by myself, with my fragile luggage, while the rest was cramped in the back. I was happy to share, but no one dared to say anything. The road was heavily washed out and plenty of police stops, meant that we didn’t get far in a hurry. Ninah and Odilon would join me next day, so much for the plan. On the ferry, I sat next to the skipper facing my fellow travelers. A spot with the most boat movement in choppy conditions. I wasn’t fazed by it, but by the fearful expressions in their eyes the others were. It was obvious, as we went through large swell at the river mouth. One large wave showered around a dozen people, I found quite amusing. They didn’t.
Smiles returned after we spotted a few pods of humpback whales. They migrate to this bay to raise their calves in calm waters.

I went to bed early, tired and excited about a long and needed cycle tomorrow.
After an early morning coffee in a friendly, local coffee stall, next to the hotel I set out on my rented push bike, heading north. The idea was to cycle towards the cape and see how far I get. The distance wasn’t the problem but roads and the state of the cycle had me thinking. But what the hell, I am here for another adventure and what could possibly happen! 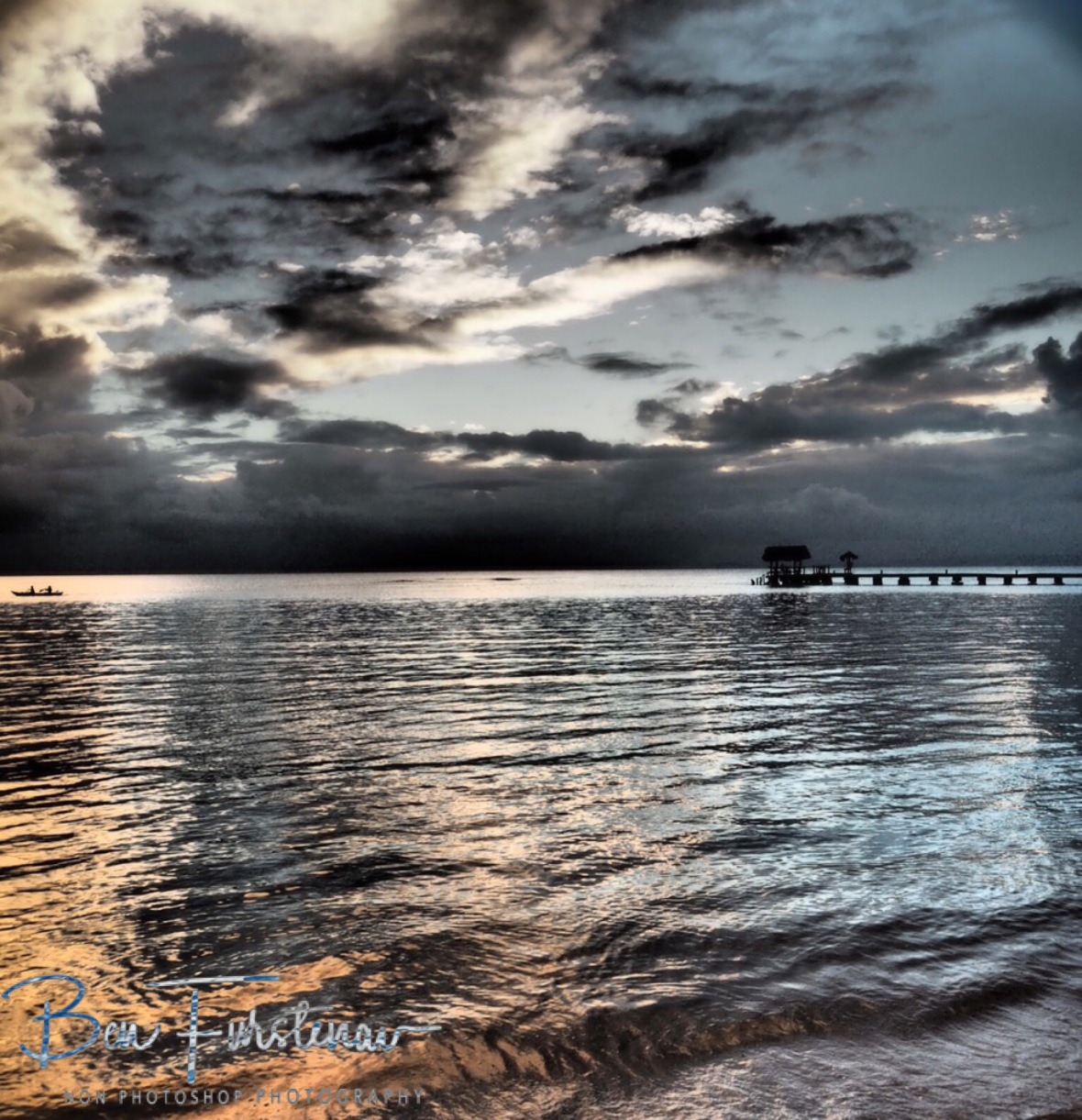 Calm before the storm

I hadn’t even cycled one km as my rear tyre went flat. Better here, then out whoop whoop. I found a little repair shop and it got fixed. Ok, second try. Pretty much at the same spot, the tyre went flat again. Really? I pushed the bike back to the repair shop, the owner looking as surprised as me. This time he checked the tyre for nails or glass. A change of idea was the obvious choice. I cycled south to the rental shop to exchange the bike. This one had better thread, but cranks and gears were in bad shape. Anyhow, I headed south, towards Isle aux Nattes, cut of from Isle Saint Marie by a narrow channel.

I had a fantastic Chinese soup for lunch at ‘Chez Nicole’ restaurant. Yum!
A young Bob Marley looking piroguist named Alex brought me over to Isle aux Nattes, and I decided to stroll along the beach, all around the island. That was the idea.

Lying on palm trees was relaxing, although not as comfortable as it looks.

Added to this idyllic atmosphere were happy kids along my ventures. Some were in palm trees, a perfect playground for kids. 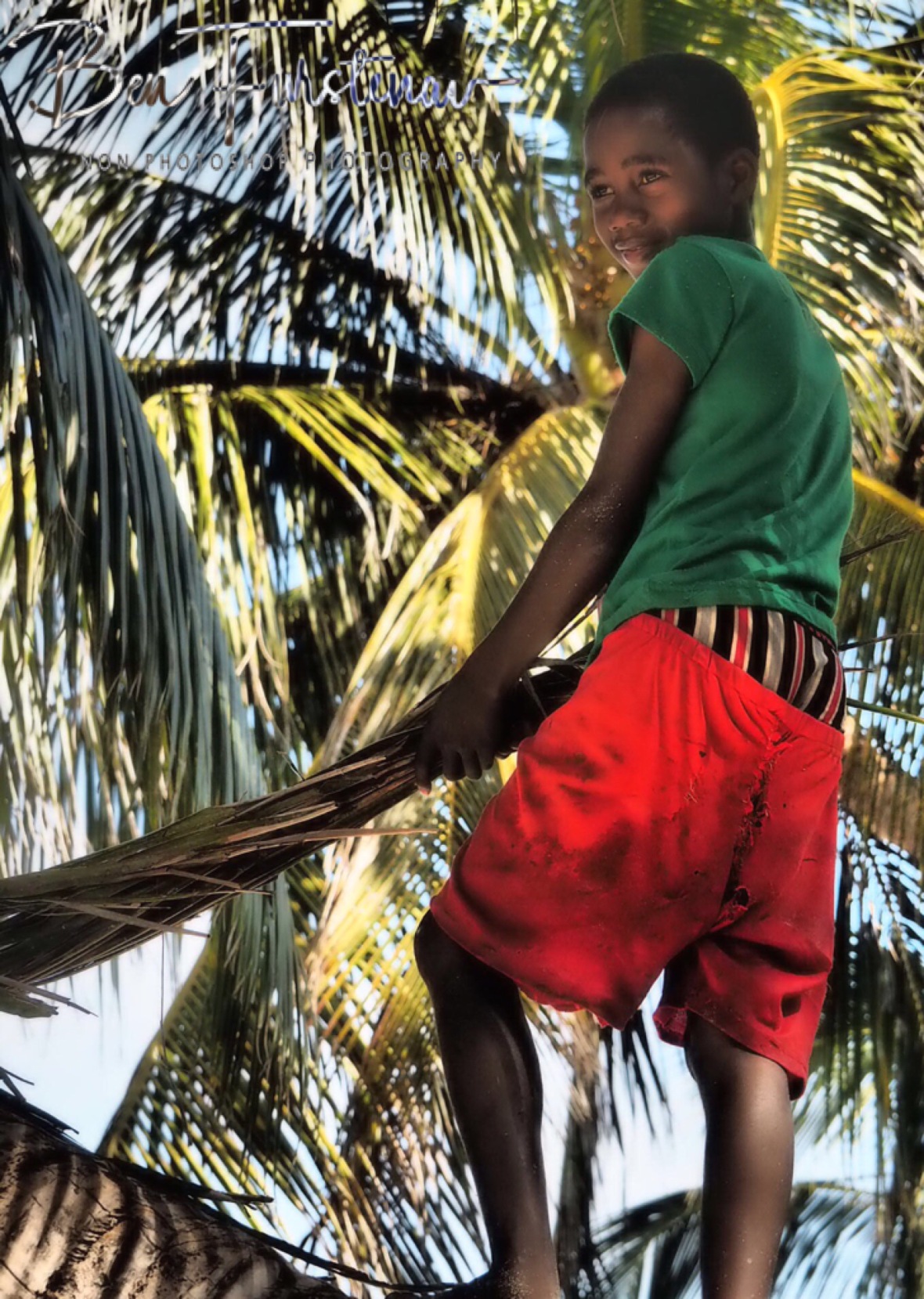 Some splashing in the calm clear waters, 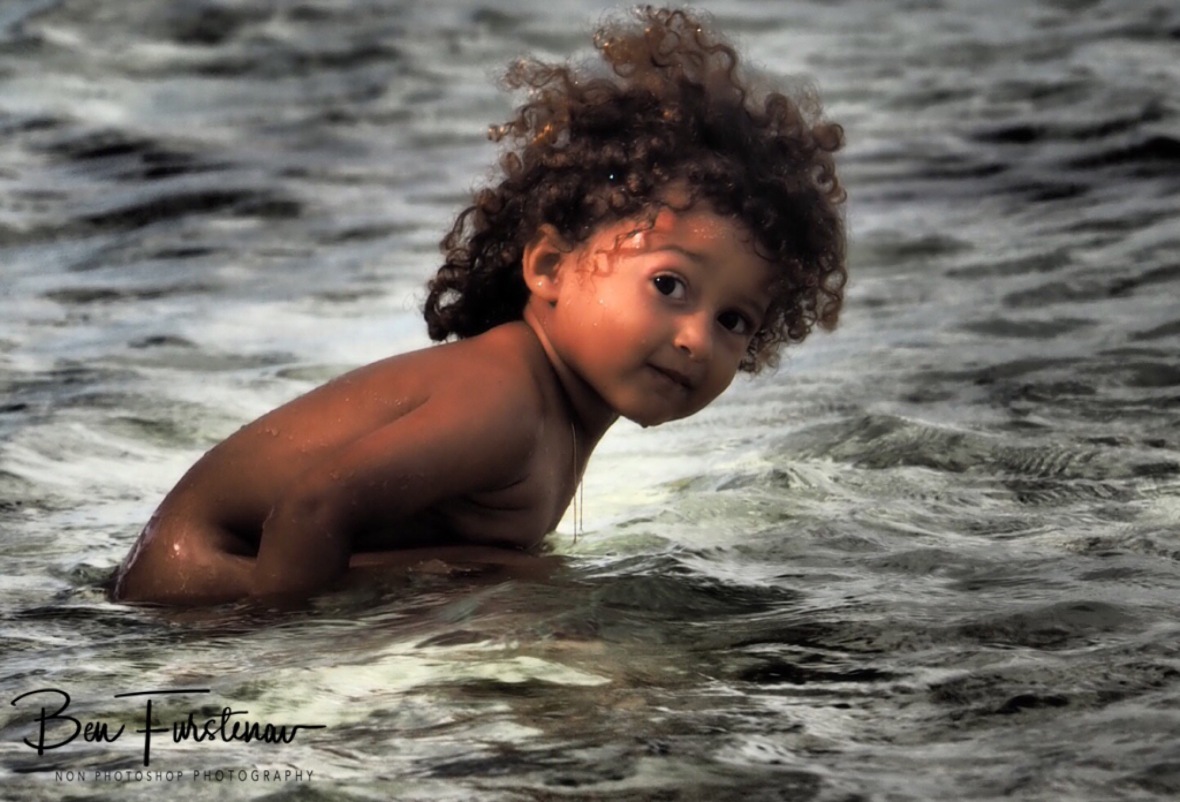 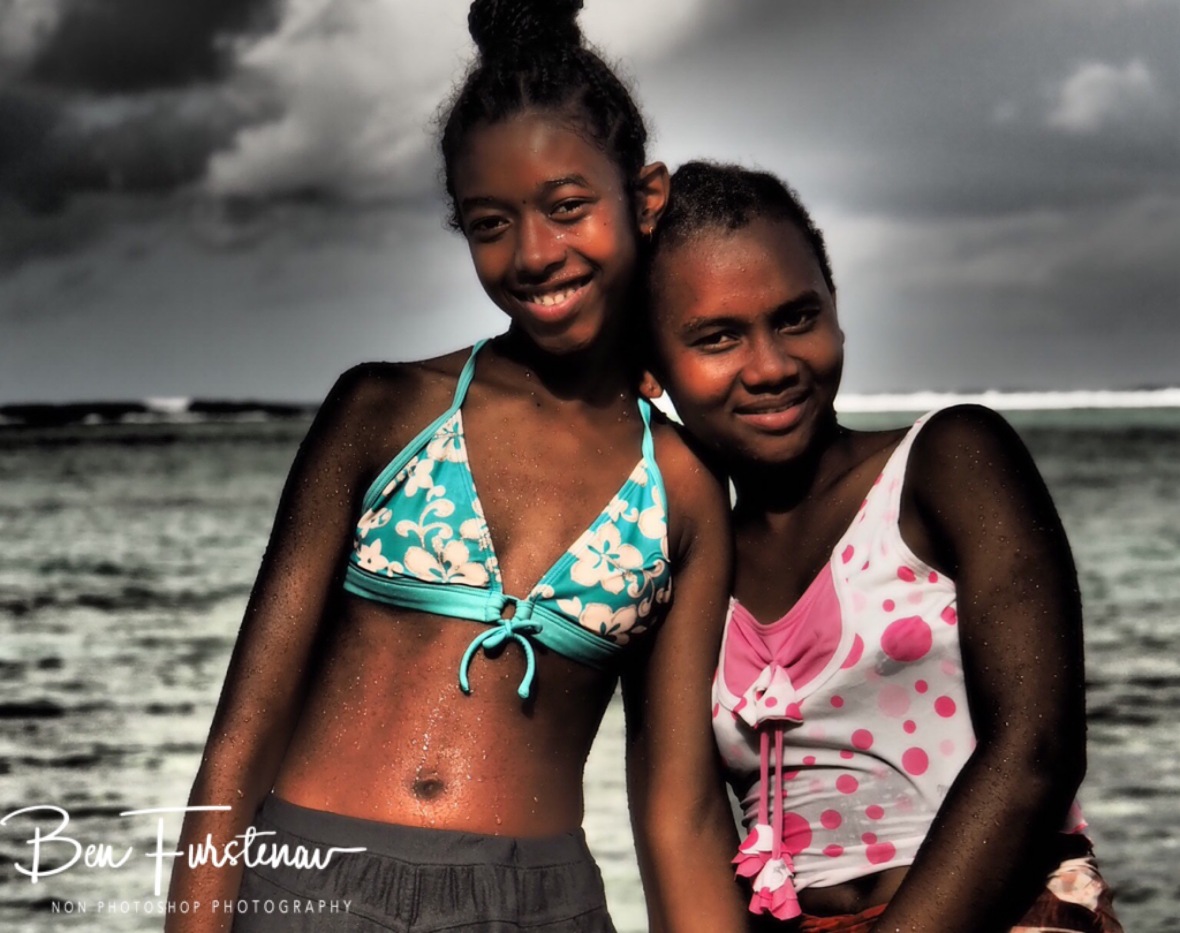 or just hanging out in a pirogue. 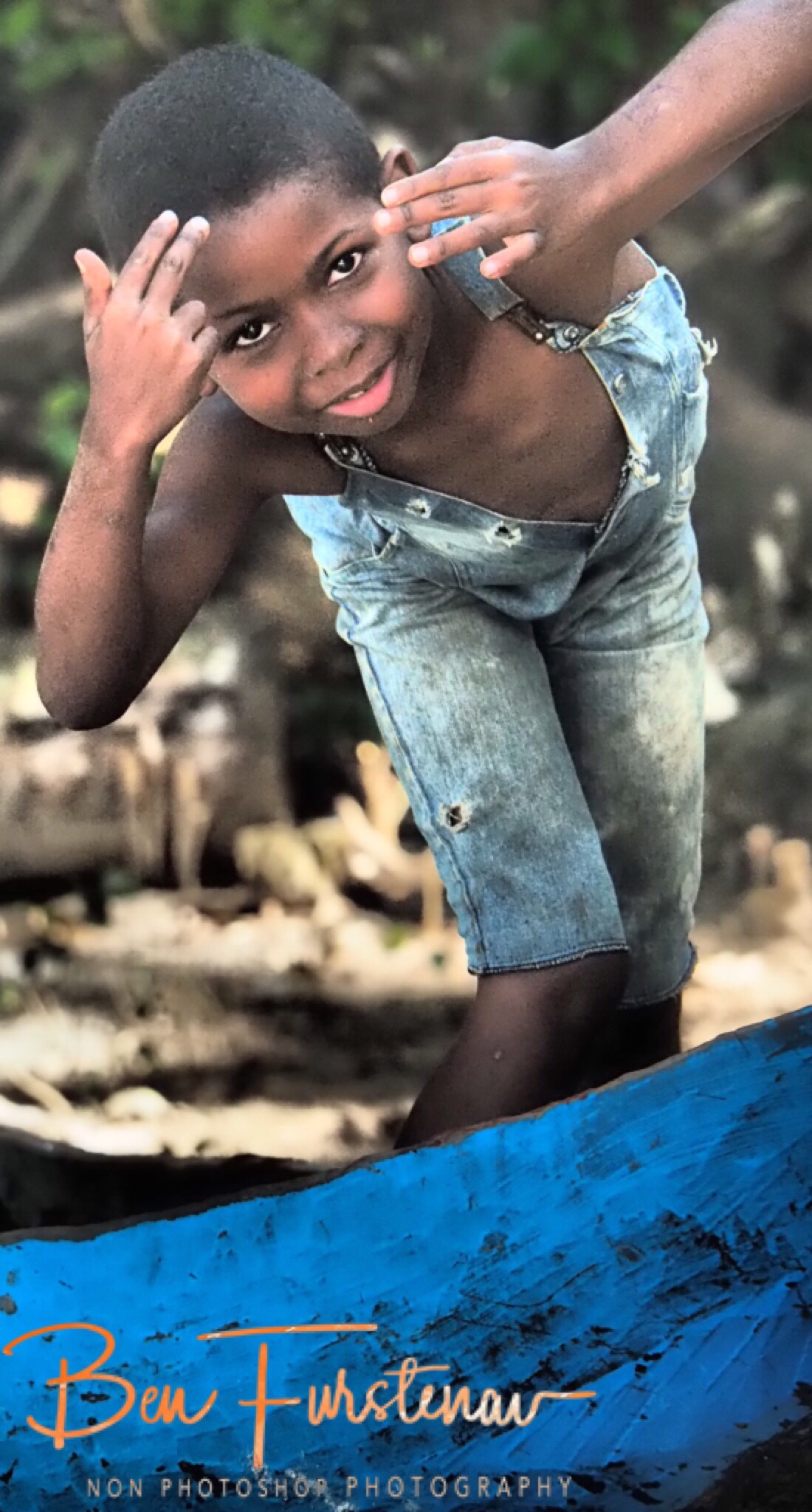 A lemur of the Sifaka family, one I haven’t seen before, appeared out of nowhere,

and even tried to get a hold of my camera. I noticed that before with lemurs, and believe they can see their reflection in the lens. 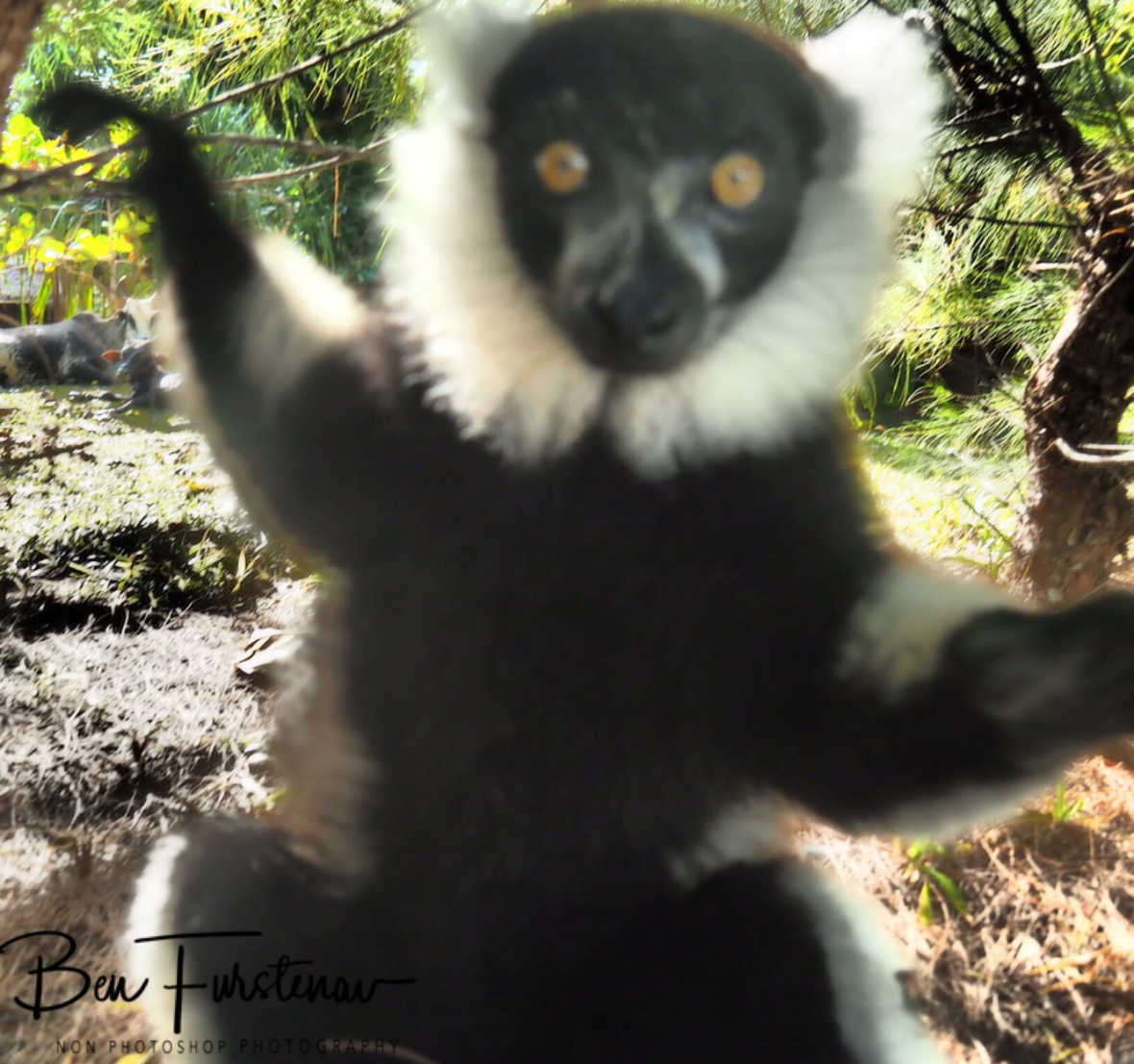 This one was extremely friendly, or hungry. Note to myself, always carry bananas. The island gotten rockier and I decided to cut inland. I followed the bush track, passed through a few communities, before I came to a tranquil island village. 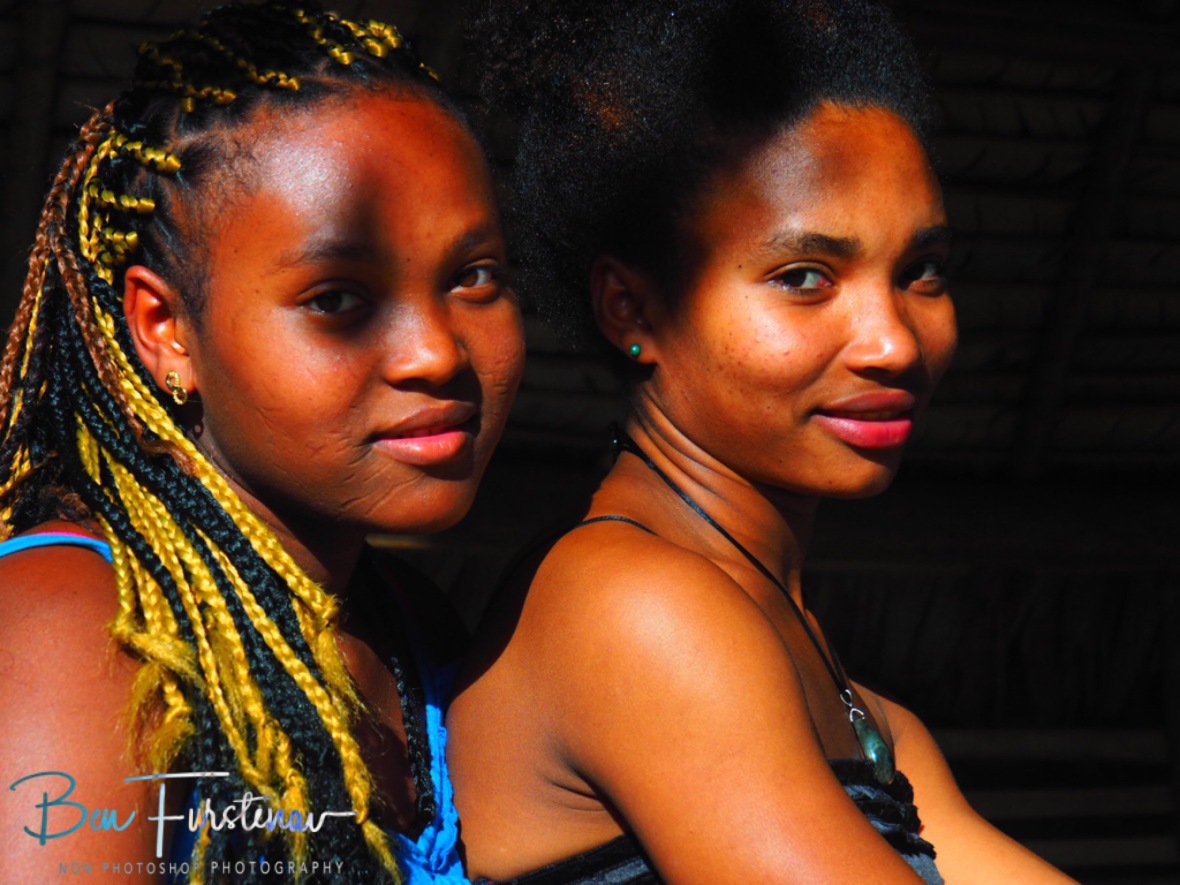 It was time for a coffee and I sat quietly next to a bunch of giggling teenage girls, in colourful dresses and happy smiles. I chose the cafe for a reason but acted cool and enjoyed my coffee, with some local treats. I heard some more giggles coming from the girls and I eventually asked if I could take a photo or two?

Some shook their heads as expected, but some put on a wee show as well. 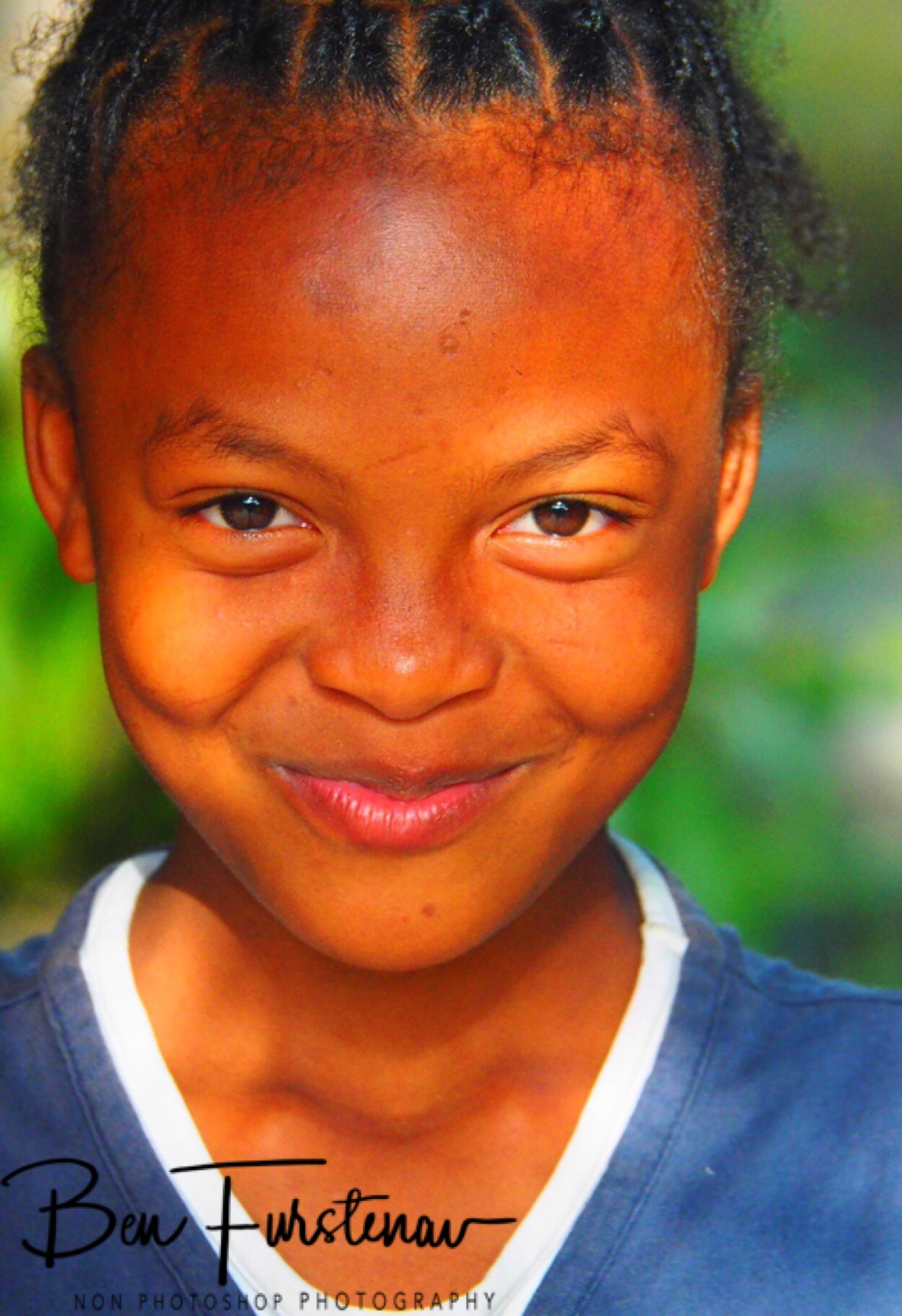 I am particularly fond of the young girl, with the prettiest smile, shy, yet cheeky. Noticeable cheek bones and a very pretty face. I showed them the photos, which caused some more laughter and stunned faces. That’s how pretty they are.

I got back to the beach for a quick swim, too many tourists in this spot. I whistled to Alex on the other side, who then pirogued over and brought me back to Isle Saint Marie.

Another stunning sunset, but I missed my main object, a jetty and a chair by about ten minutes… bummer.

It was dark as I returned and Odilon welcomed me with his cheeky grin, saying Ben, Ben, Ben. Good to see him too, and Ninah of course. 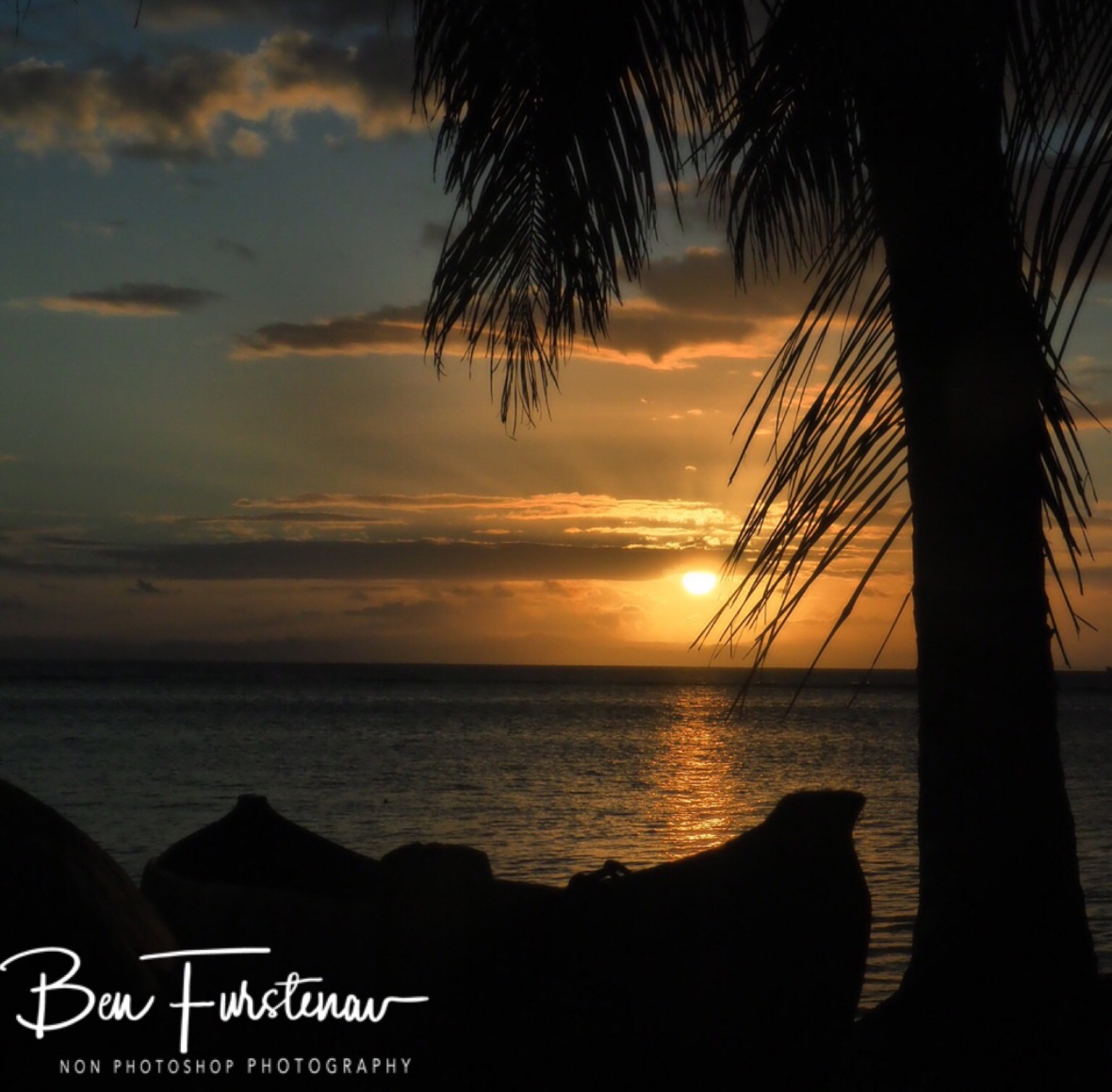 We had dinner and decided to go for a beer afterwards. I had to excuse myself for half an hour, as my FB and couch-surfing friend Mino was on the island, and so I had dinner with her family at a restaurant around the corner. She was the main reason for me to go to Isle Saint Marie at these particular dates. We have been online friends for over a year, and not meeting up whilst being on Madagascar seemed rather ridiculous. We had a good chat and I met her friendly family. It seemed a rather quick catch up, as the kids were tired and ready to go home. Nice to have finally managed to meet. I returned to the bar where Ninah and Odilon waited. Melina and Bakoly from our hotel joined meanwhile. Nice. We had a game of pool, which Odilon and I won, against some wanna be french pool sharks. We decided to go to the local karaoke bar,and heard some rather interesting copies of Malagasy favourites. Ninah, my singing angel in the back seat, was not impressed. But who cares, it was a friendly atmosphere, lots of happy locals and we had plenty of rum and beer. It must have been around 3 am, when we finally made our way home. I crashed out without undressing. Ha ha… a great day