Damn, Damn,Damn…. I am not happy with myself…
I decided to go for a late afternoon stroll along the beach, here in Tamatave, without my OM-D…

Tamatave is the largest and most important city along the west coast. Equal to Toliar on the west coast, it is the shipping port capital on the east coast. This is where most of Chinese plastic imports arrive, before being distributed per truck to Antananarivo,or beyond. 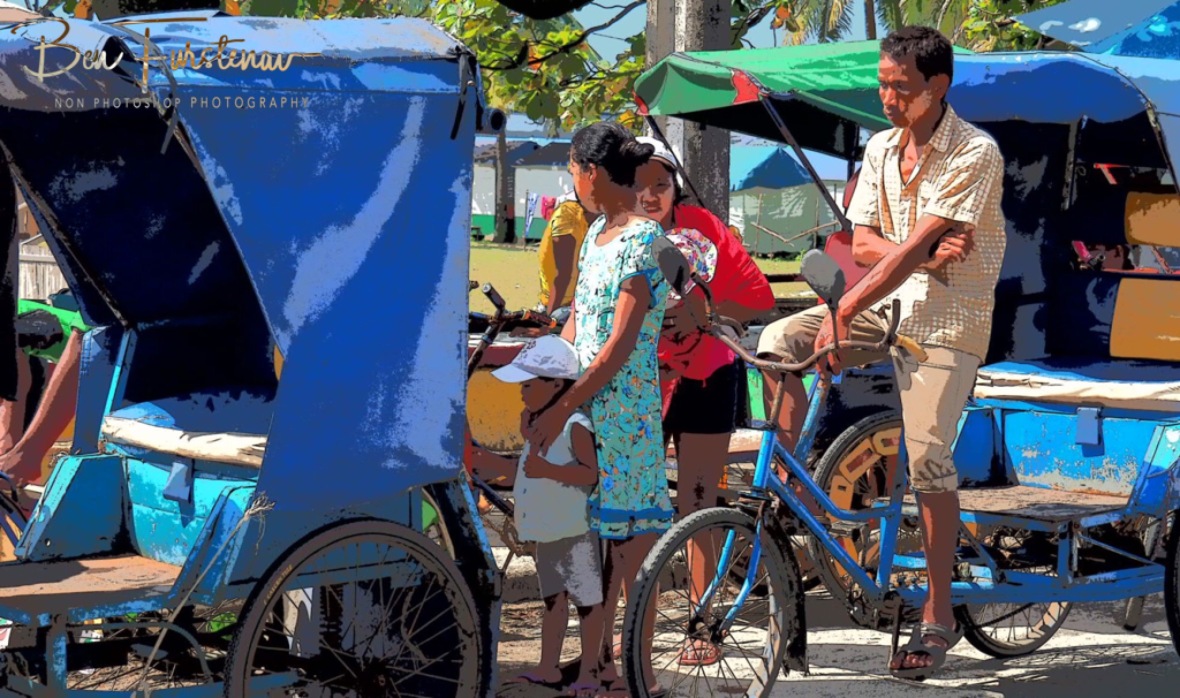 We were here this Sunday morning, on a sight seeing tour with Ninah and Odilon via push push.
I still would have preferred to walk, that whole push push thing still doesn’t agree with me… but at least it keeps the economy going. We stopped by the beach and enjoyed a fresh coconut. Yum.

Ninah and Oilon looked at the beach, which I didn’t find impressive at all. Why not practice my panning technique, there’s plenty of colourful push push passing by. Different shutter speeds, and different settings.

Further on to the markets, with more fantastic art of all sorts, same problem for me as before. I did buy some cool T-shirts though.
A cute little boy got my attention, riding his purple cow.

Lunch was served at a fantastic local restaurant, called Baratak. The open air kitchen was buzzing, short order head chef whirling his way around the kitchen, other cooks preparing mis en place, even home made ‘Naan’ like bread. Just like any other kitchen, just a little bit different, Malagasy style.
The tour was ok, but it felt more like show the Wassa the highlights, in comfort and style. But the highlights for me are clearly behind the scenes.

On the way to the beach

After a night of heavy rain, the sun came out mid morning that day. I decided to make the most of it, as weather changes here quickly. Ninah and Odilon went on visiting friends, I had some time to myself. I was contemplating to take my OM-D with me, but I decided against it. I realised and admit it, I have become a photo addict and overruled my own rule; Always take the camera, you just never know.

This time, I just wanted to go and enjoy the ambiance.

The beach was teeming with people, unlike a few hours earlier. Locals of all ages in colourful dresses, all happy and smiling, in particular kids, enjoying joy rides of all sorts. Even a mobile casino, Malagasy style, included a roulette table. The idea of the usual roulette table, was the same. Instead of using a ball, a carefully weighted helicopter, attached to a pole in the middle of the table was used, numbers replaced by Malagasy town names, to place your chips. ‘Tamatave’ equaled number zero, as a jackpot. 10 out of ten for invention.

Further on, a game of rugby union was held on the beach. Boys and girls, equally competitive and skillful, of all ages. Best game of rugby I seen in a while. As I watched along, I had two thoughts; To join in, or get my camera.

Both would be as good choice as the other. I raced back to the hotel to get my camera,and compromised to a new rule. Always bring your camera, but enjoy the atmosphere as well. The game of rugby had finished on my return, I knew it. The setting sun gave me just enough light for a few shots at a little pond, reflecting colourful images. 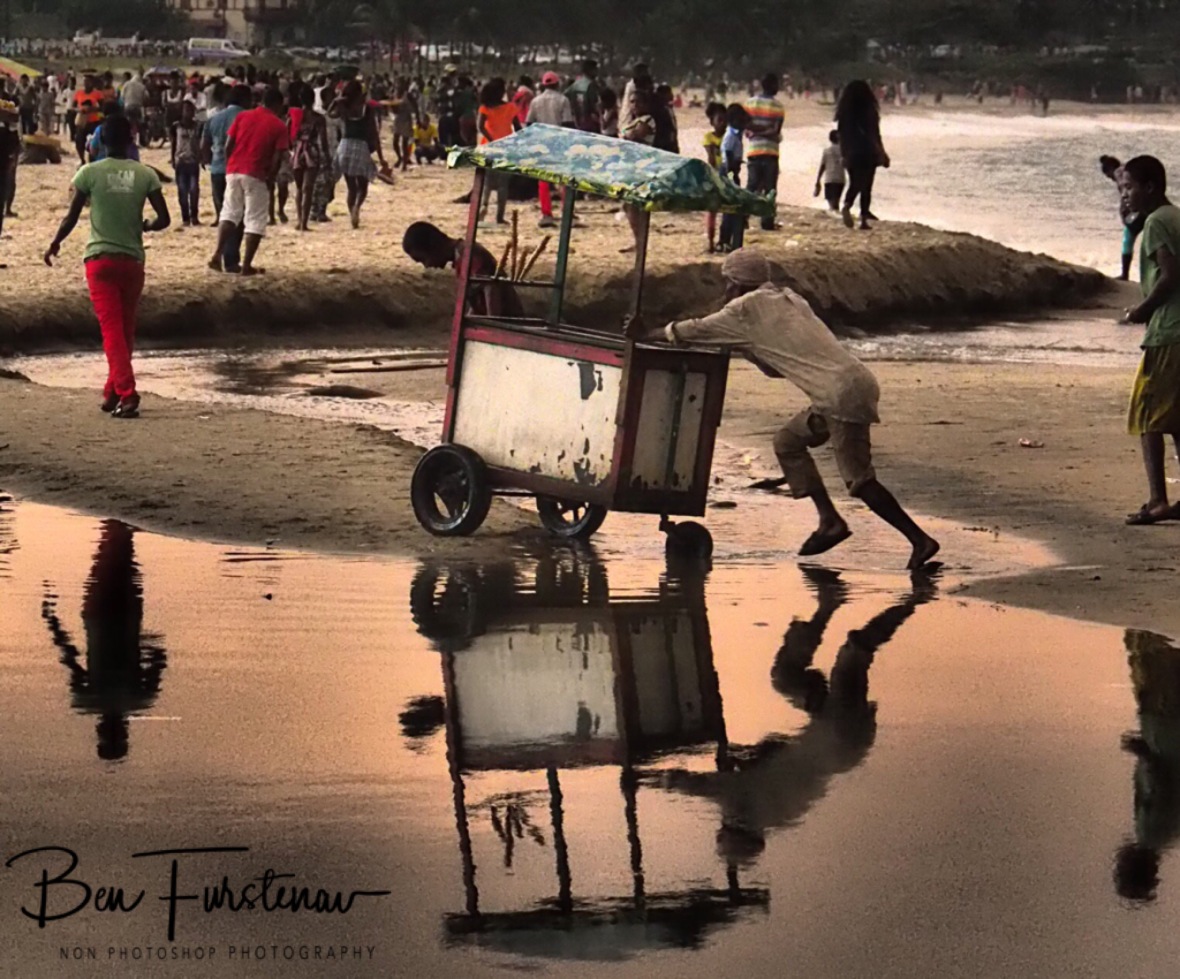 Vendors of all types

Even though I was the only Wassa around, and got some attention, walking freely in between this happy event with my camera, I never once felt threatened. In fact, it was the opposite. Most locals greeted me friendly, or even posed for a shot, and race towards me to see the result. Some turned away, which I totally respect. I feel like an intruder already most times.
However, it isn’t a good idea generally to walk around with a camera at very crowded places, anywhere in the world, and I wouldn’t advise that to anyone. As friendly as the locals are, an opportunity to some extra money may not be rejected.
I would do the same, under these circumstances, in order to survive.
Being at least 30 cm’s taller then most Malagasy,and with a mere 75 kg’s, a fair bit heavier, doesn’t make me an easy target. They would choose someone, more like Ninah‘s size, I thought. Always, always pay attention to your surroundings, no matter where in the world. 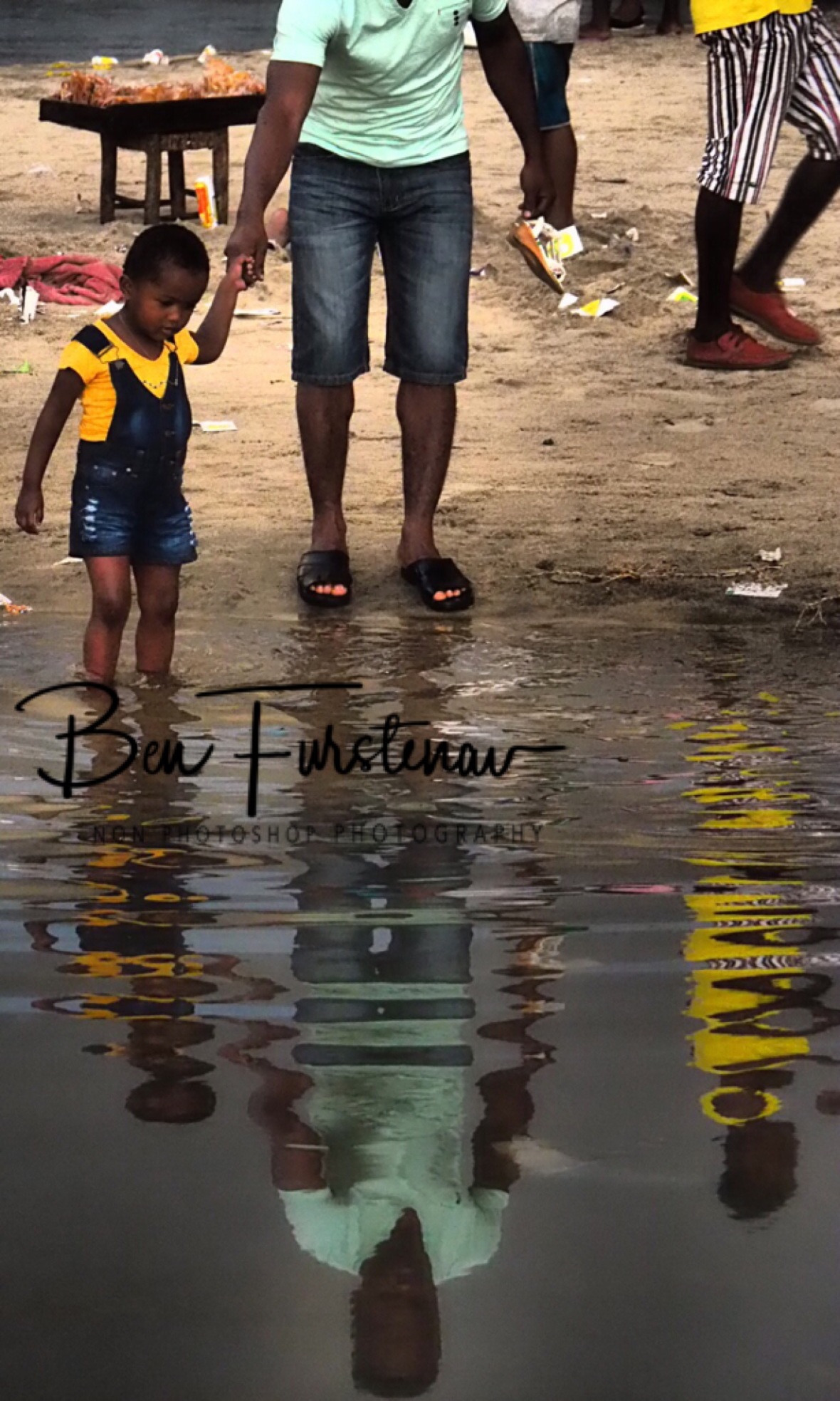 Ninah, Odilon and I had a dinner date later, and just pulled in to the car park, as I arrived back from a great afternoon by the beach. I greeted friendly and happy, but the usual cheerful reply wasn’t responded. Something clearly isn’t right, but I only received remorseful looks, instead of answers. I thought of the worst outcome possible, but remained calm and hopeful.
Up in the room, Odilon explained what happened. Whilst taking the push push to their destination, and Ninah being busy busy again on her smartphone, a moped came up from behind and snatched the phone. Like a magnet, she suffers from phonephobia, and does not pay attention to anything or anyone around here, whilst on the phone. Being a Malagasy at mature age,and of petite build, she should have known better. But, it was only a phone, it could have been worse, like the millions of airey, I gave out earlier, to pay this up coming new adventure. Weird though, that I had those thoughts earlier during the day.
We had dinner, Odilon and I tried to cheer Ninah up. It appeared that he gave Ninah hell all afternoon. I am seeing a bit of a macho side in him for a while, even cocky sometimes.

I decided to walk back to the hotel along the beach and soak in a bit more of that happy party vibe. It was dark meanwhile, but I still felt safe. Another thing I wouldn’t recommend to anyone, unless you feel confident enough and are of sold build. At karaoke bar Sarky’s, a premier league games was screened and a local band was hot in action, jamming Malagasy tunes. Not as hot as the tiny, dressed up girls, shaking what they got. I was wearing my West Coast Eagles singlet,which I chose for this journey for a number of reasons. The colours represent many flags in Africa; The eagle is a sign of power and strength,particularly in Africa; the shirt said West Coast which could be anywhere in the world. I ordered a beer, as I heard ‘G’day mate, you Ozzie?’
I almost coughed up my drink,turned around and said ‘sort of,mate’.
‘The eagles are shite, mate! Go the dockers’. And so I met Bruce from WA, on a mining contract here in Madagascar. Johann, the owner of the bar, came over to greet me. A mountain of a man, with cauliflower ears, the resemblance of a tight head prop. He moved over from Pretoria about 6 years ago, with a large ice machine, that supplies all of Tamatave. I noticed that I attracted a fair bit of attention meanwhile, a few friendly smiles from the girls on the dance floor. Not really that hard to work out that money reigns in here. When Johann disappeared with one of the girls, who shortly after sat next to me, in hope to snatch a ‘rich Wassa’, I finished my drink, shook his hand,and said ‘Allblacks rule,mate’.  I wasn’t gonna be part of his boerworst business.