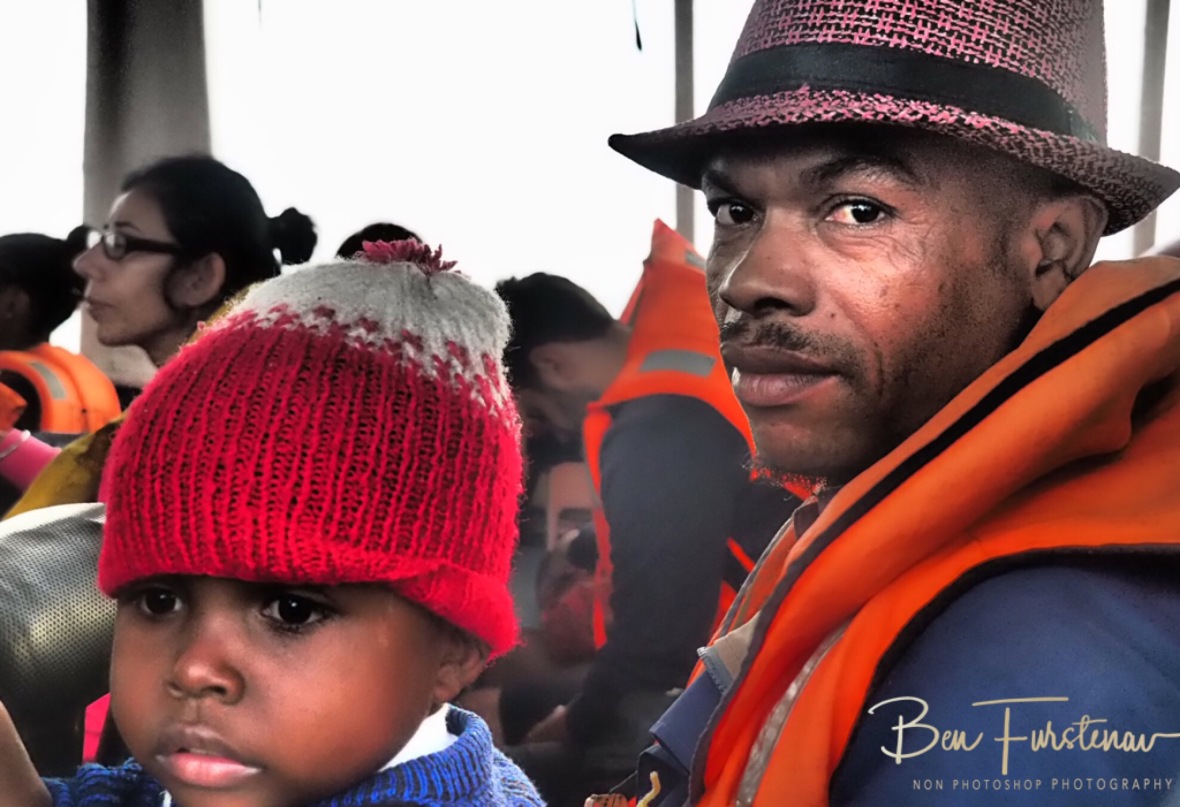 I know, I keep saying, that I am having a funtastic time here on Madagascar and today wasn’t any different, yet unexpected different.

After 4 amazing days on Isle Saint Marie, we left with the 6 o’clock early morning ferry. After a heavy shower, the sun was shining thru some clouds, almost looking like a torch. 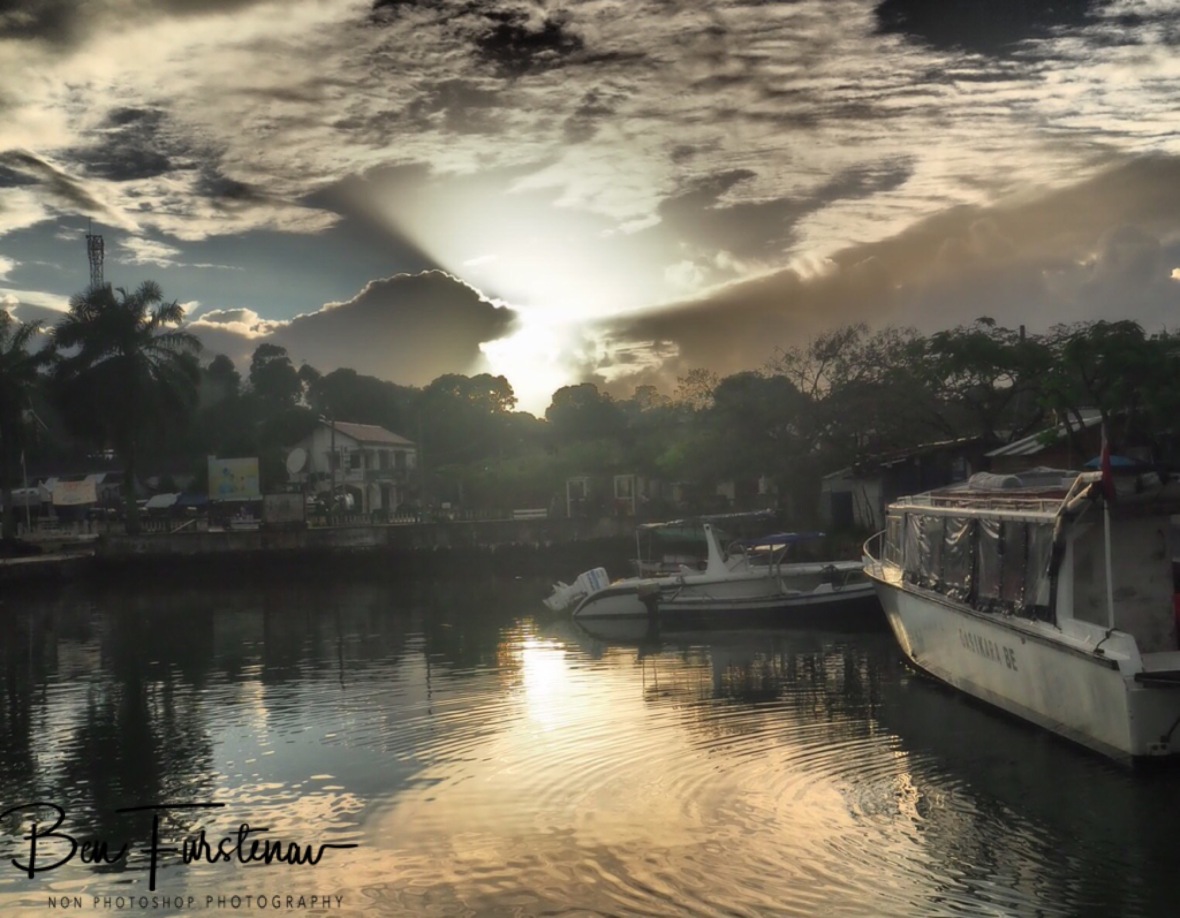 Next to me sat an older friendly local, with the cutest young boy on his lap. It took me a while to resist but eventually asked the man if I could take a few photos. 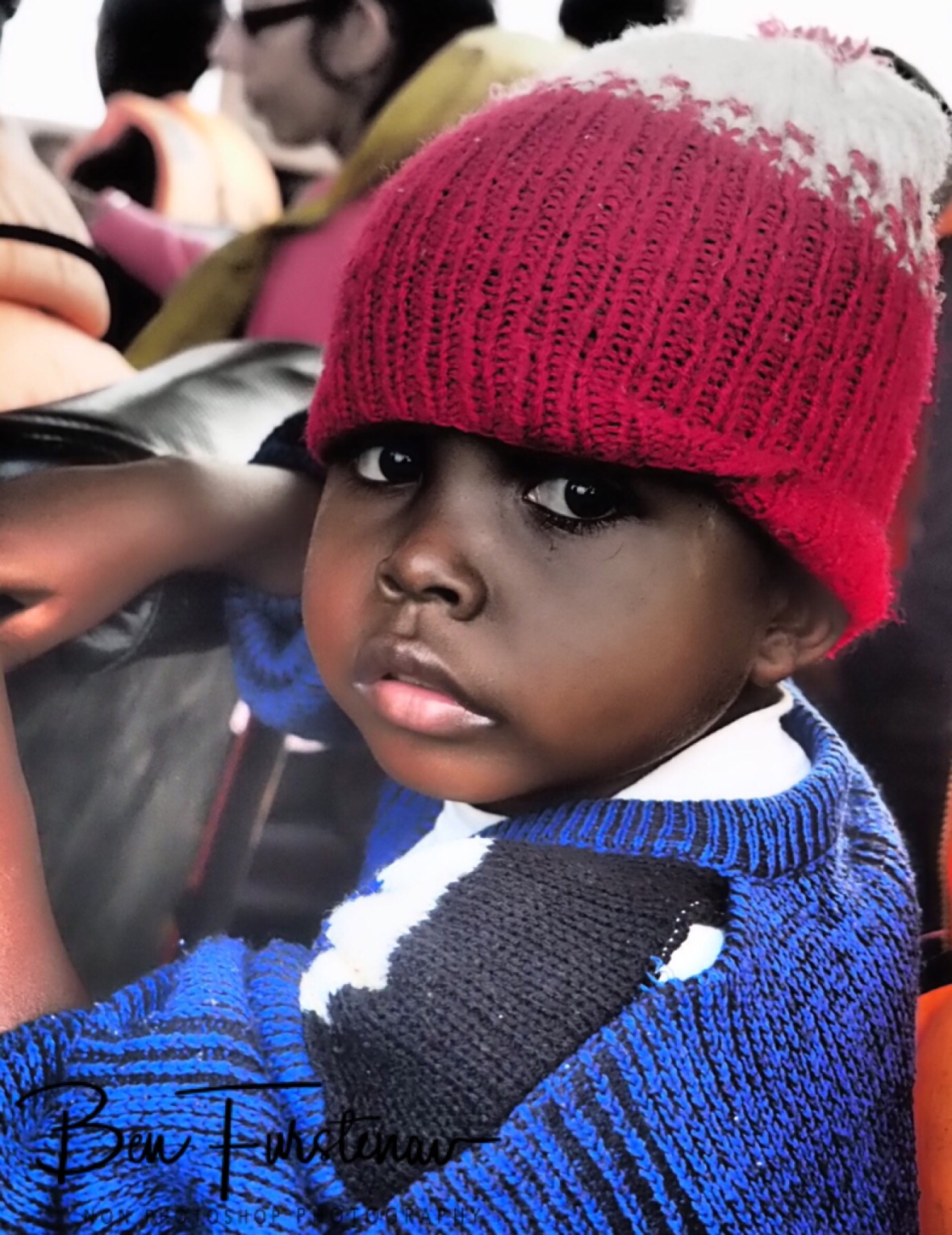 He looked a little frightened, but so cute with his big brown eyes. Meanwhile the sun was breaking through heavy rain clouds again. As we saw a few pods of whales, I was able to get one shot against the sun, through the window on the opposite site.

We were just gonna drive back to Tamatave today, a 4 hour drive, nothing too exciting. I was still very tired, a severe lack of sleep. We stopped for a coffee and a coconut along the way,  I needed some freshening up. The swell was amazing, 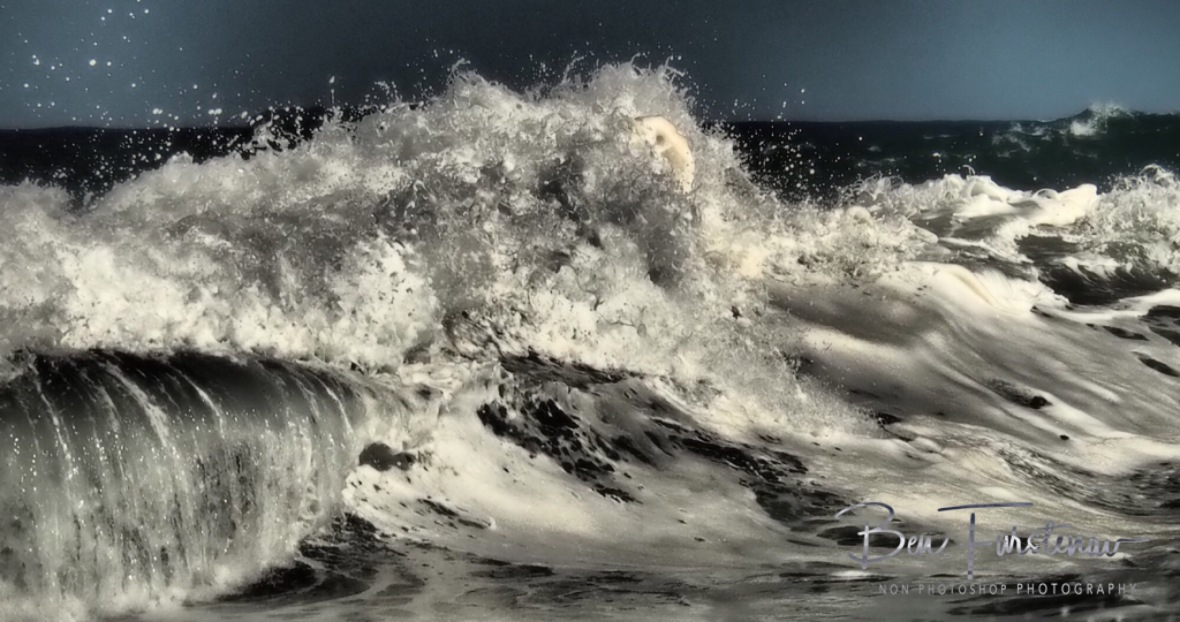 pounding against a rock wall, sweeping over rocks on the beach, which looked rather skurril . 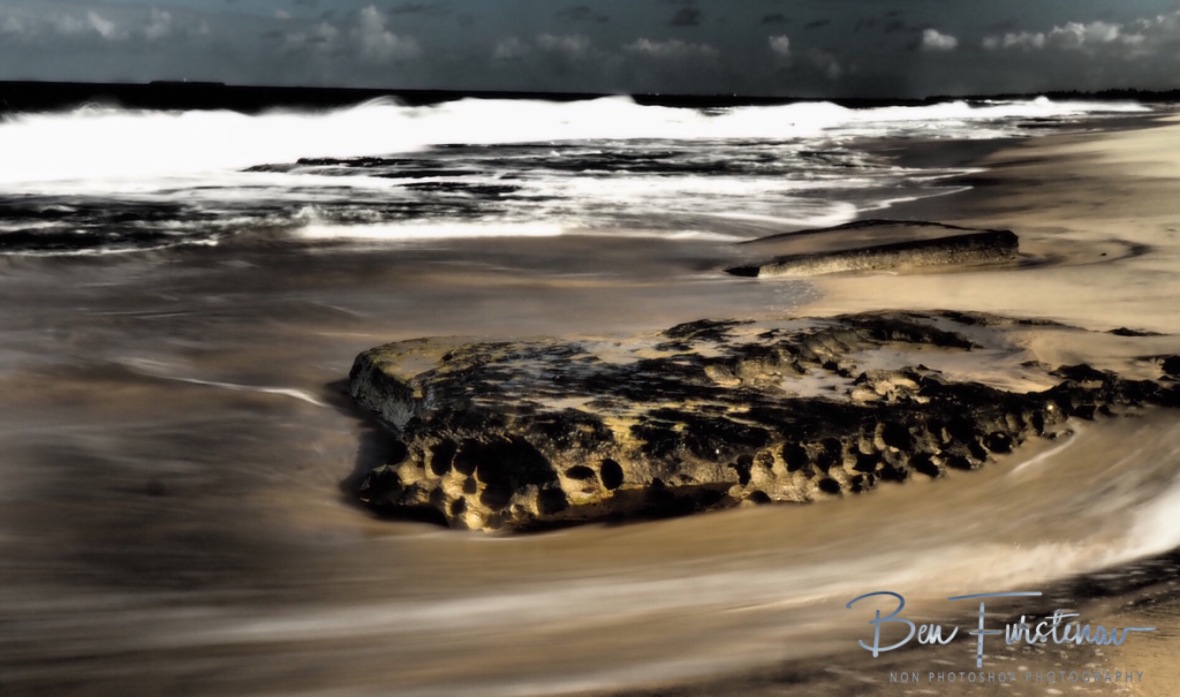 I noticed a couple fishermen using long bamboo sticks with a line and cork float, trying to catch dinner in treacherous waters.

A young boy and his older sister appeared to watch daddy fishing, and played on the beach. Wow… how cute are they. 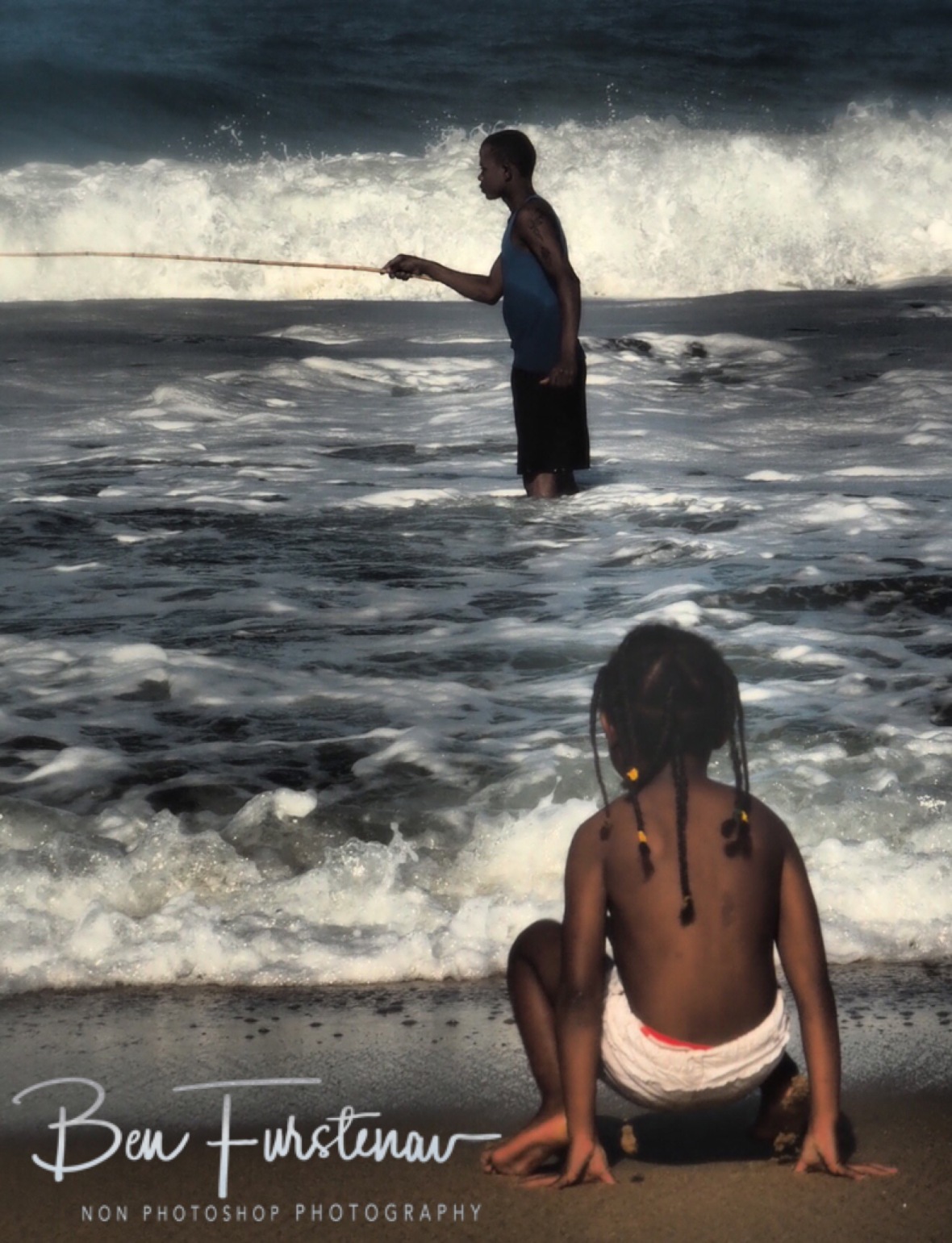 I walked back to the car park, the sun disappeared behind some low clouds and gave me a great photo opportunity. 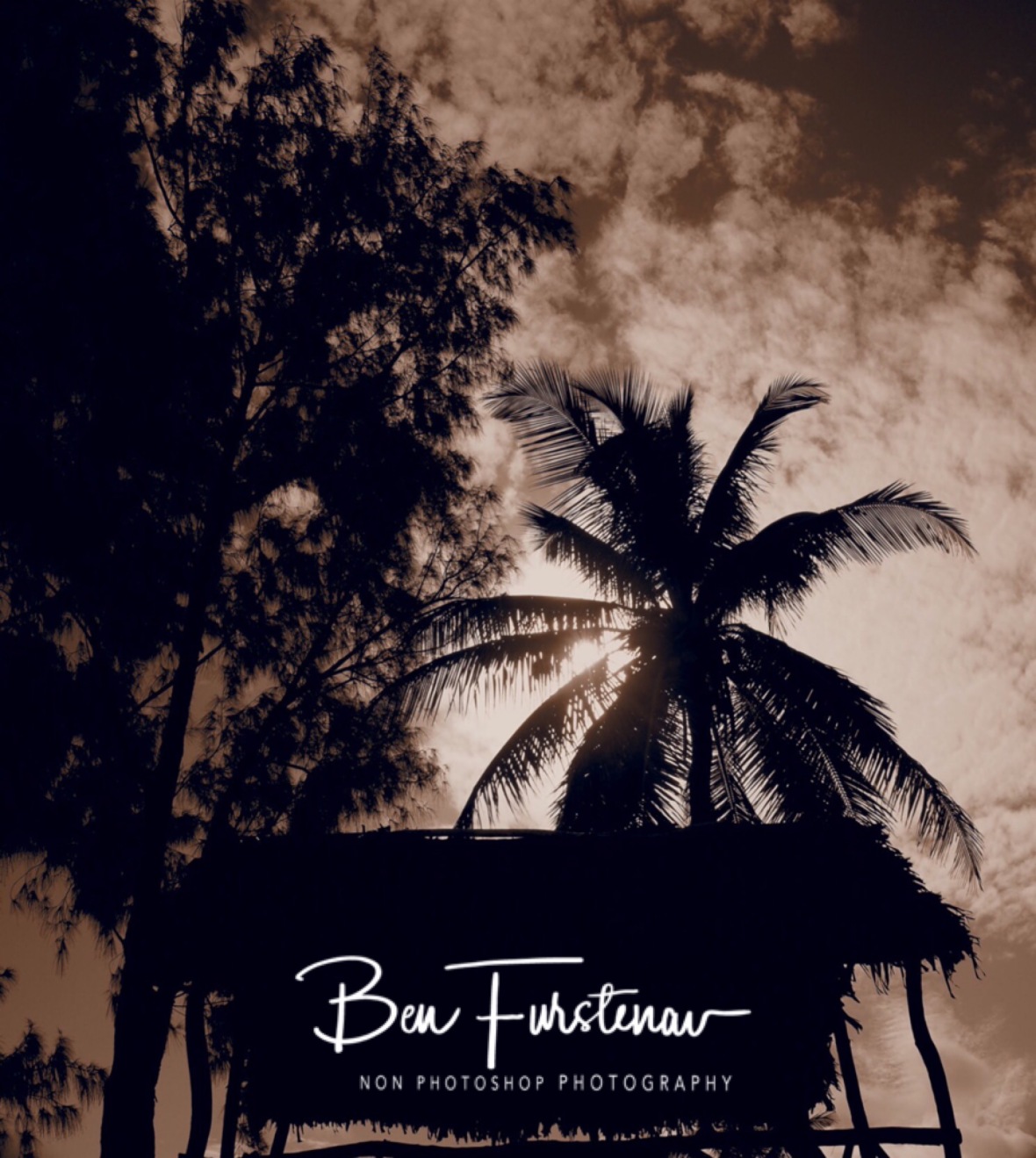 As I was relaxing on the grass, I was watching the young kid riding the fishing rod like a horse. Awww 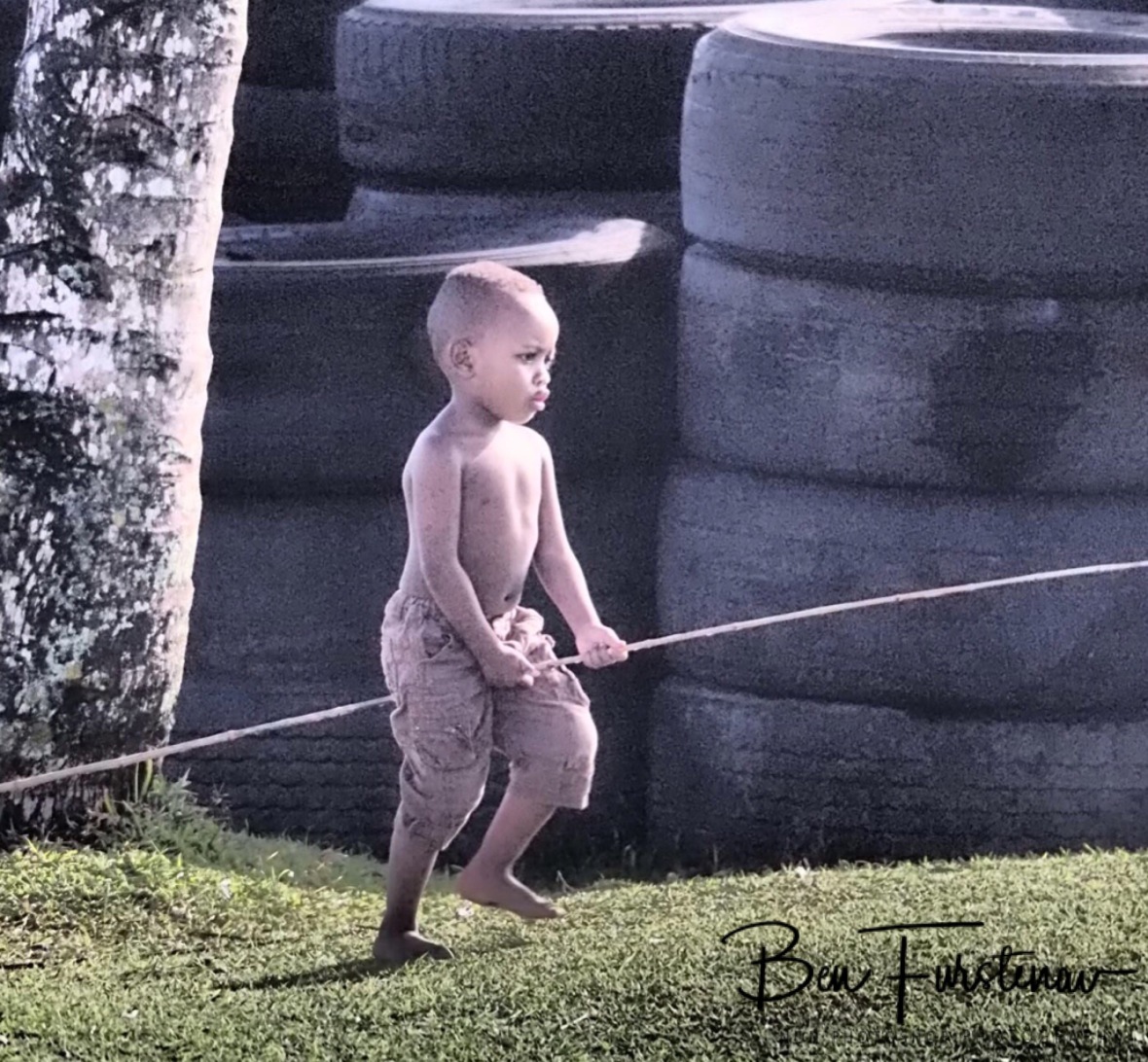 As I waved to him, his mom encouraged him to come over to me and he did. We took some ‘cool’ shots and did the Malagasy ‘Doona’ greeting, where you gently push your right fist together and retrieve back to your left breast, where your heart is located. 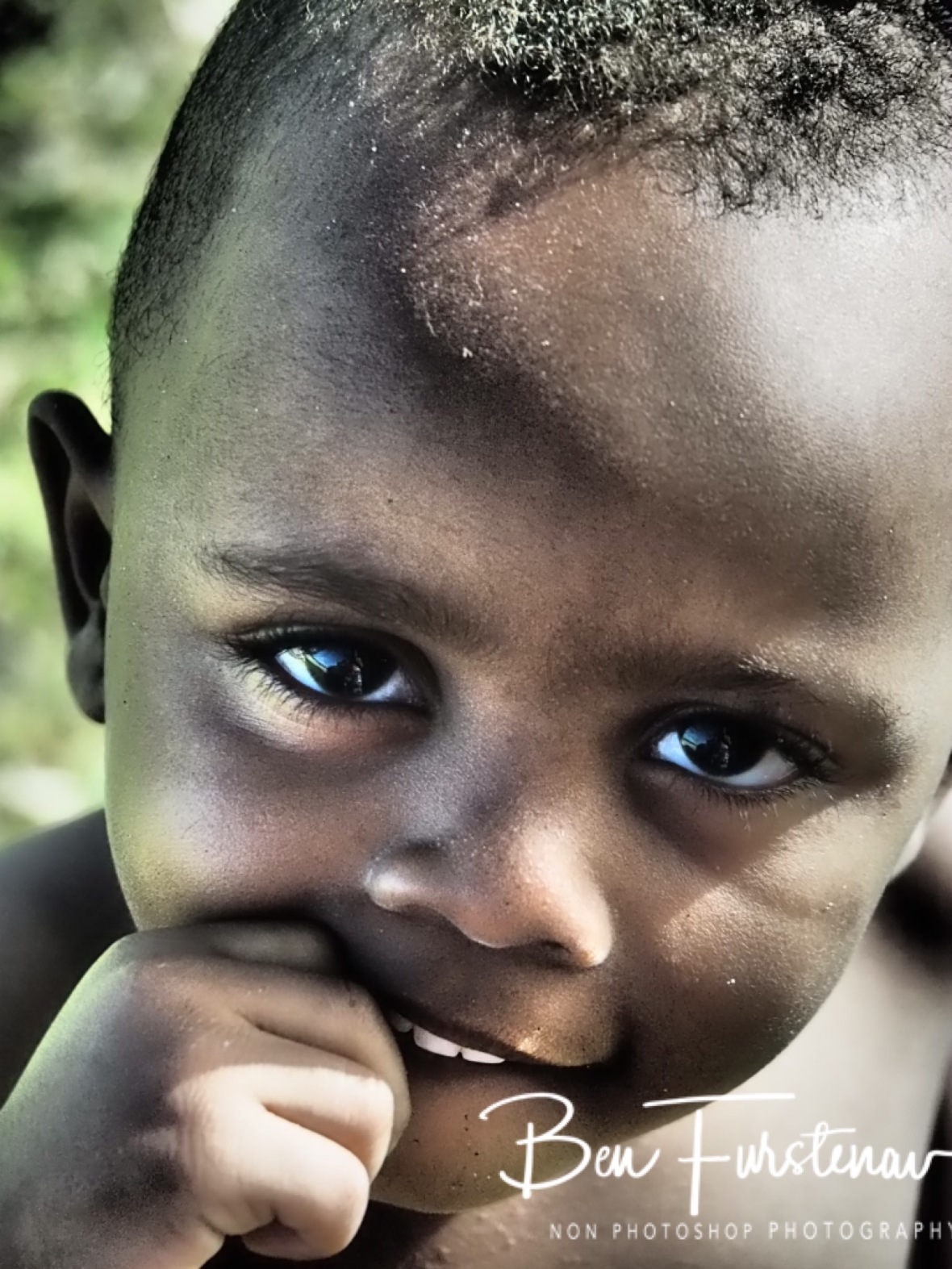 I gave him a couple of cookies, which he then gave back to me, as I opened my hand, without saying a word. Of course I gave them back, but what a gesture. 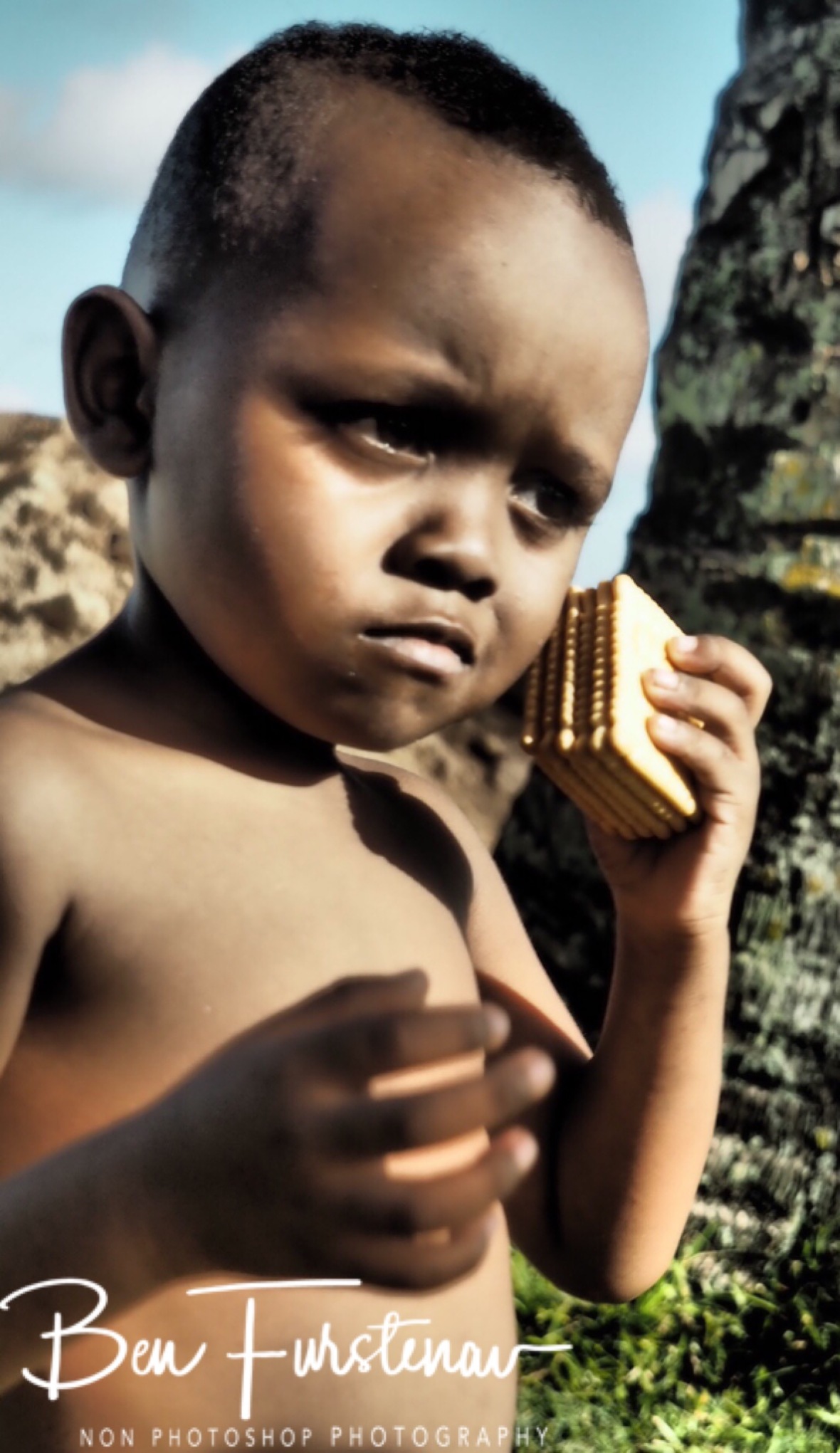 Sharing the little you have. Meanwhile, his dad, absolutely soaked, had gotten back from fishing and must have watched the on going. He still had his friendly smile and asked me the following. 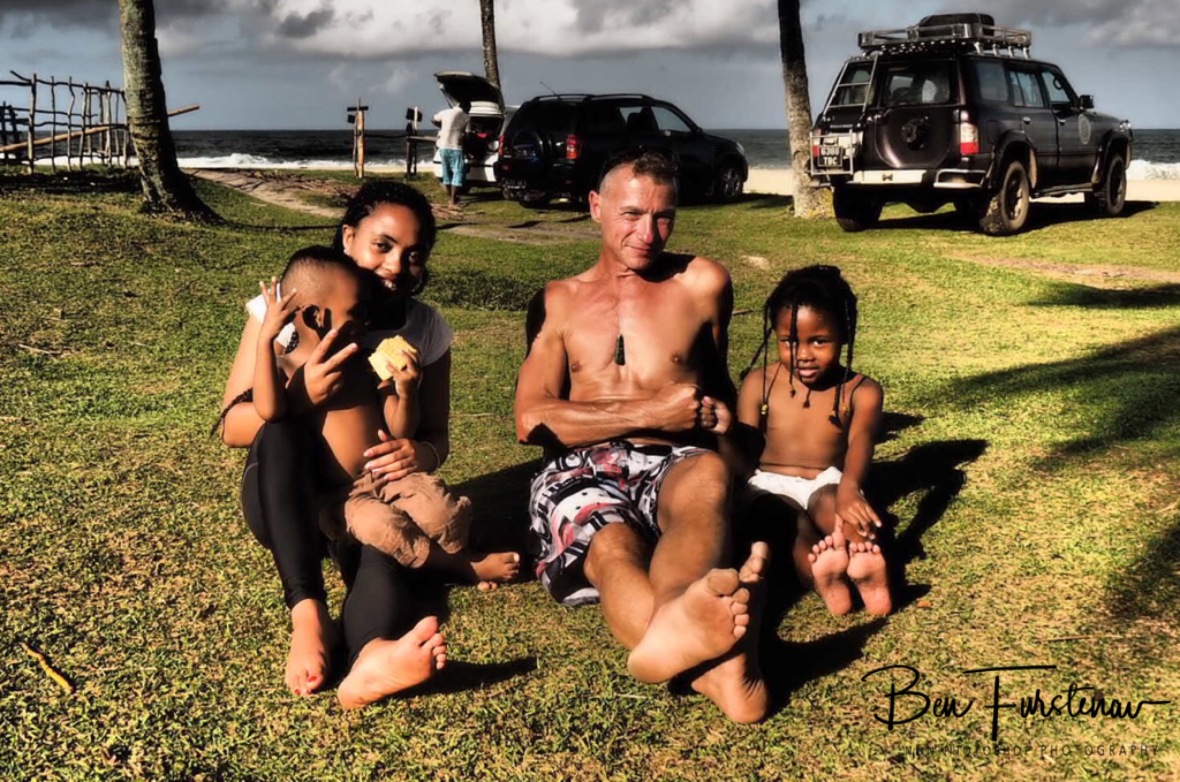 ‘Can I take a photo of you with my kids and my wife?’ At first, I thought he meant, if I could take a photo of him with his family, but as he pulled out his smart phone, he pointed at me and his family. I was clearly stunned and honoured, as this is the first time here on Madagascar, that someone asked me the question, I normally ask. I did the ‘doona’ greeting with the gorgeous little girl, photos speak for itself. 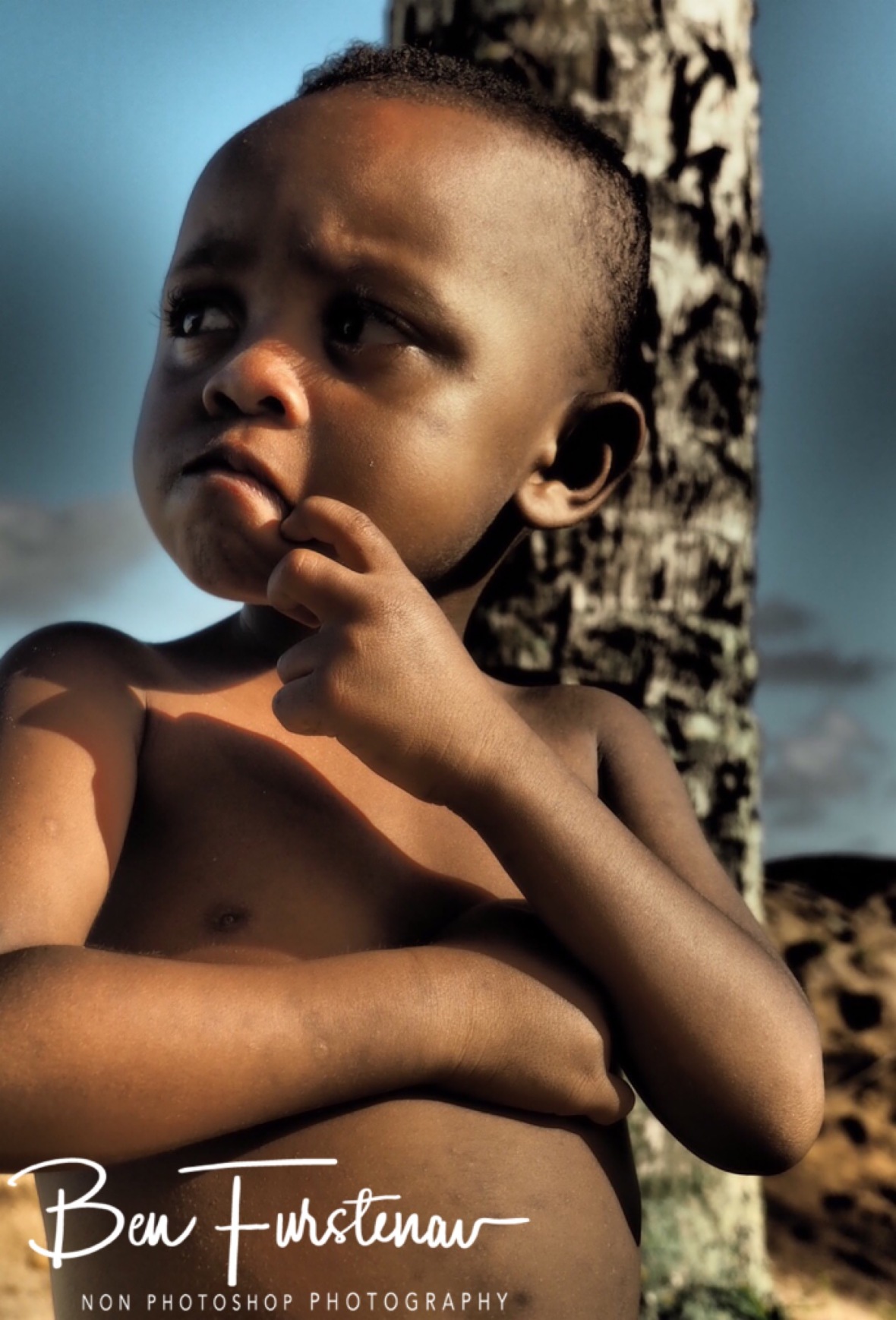 He asked me over for a beer and food, another amazing gesture, and to join for a chat. I skipped the beer, as I had plenty of it days before and wouldn’t even dare to eat his food, as they had so little. He would have offered me his bed, if I needed it. Watching father and son play around, whilst youngster was wearing his oversized boots, was just joyful. 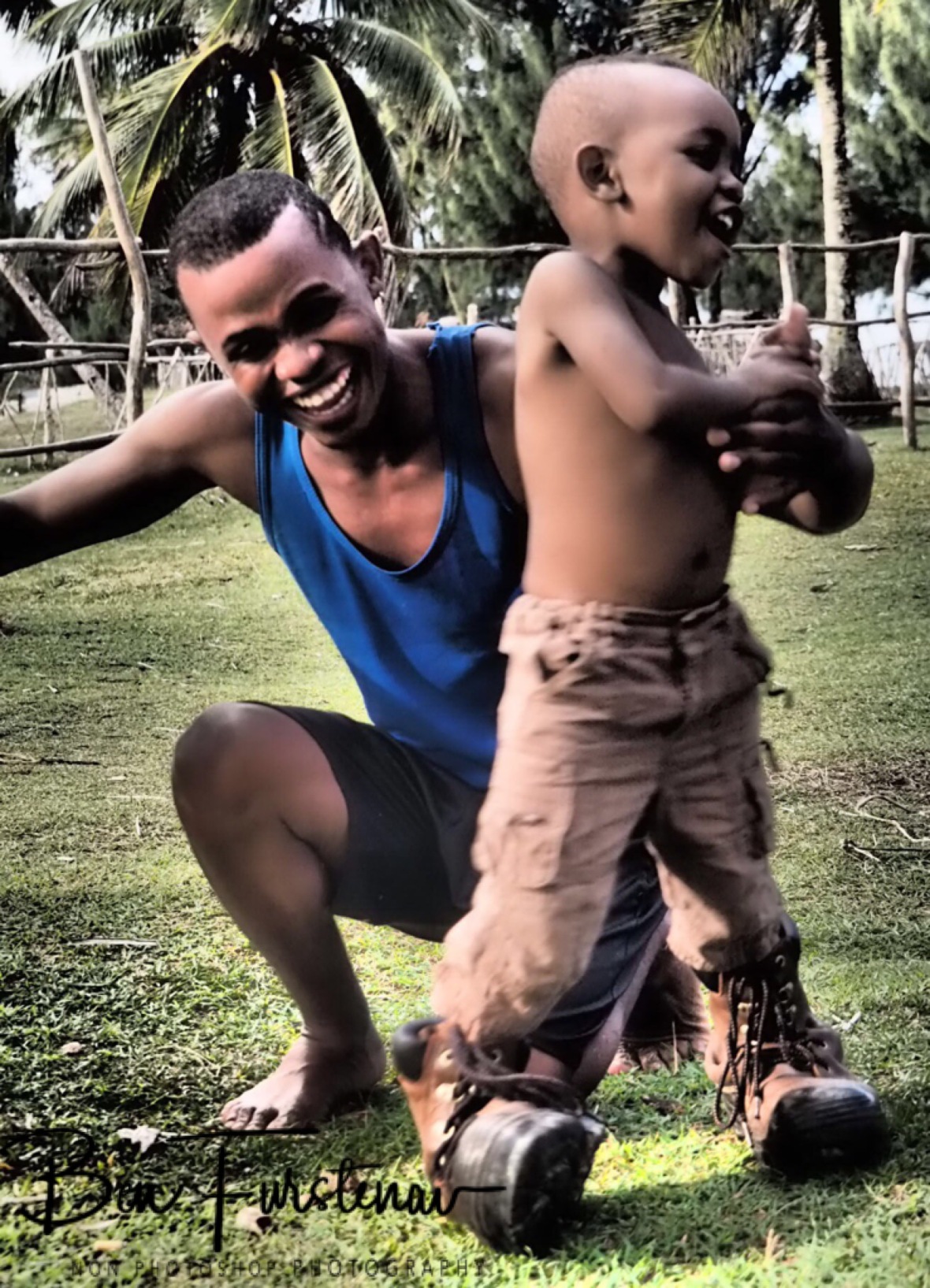 It really shows,what a happy family is supposed to be. I have met some incredible people here, local and tourists, and this country still keeps on amazing me. There is no way I can put that in to words. I couldn’t resist a friendly chat and he asked if it was possible to send the photos over via Facebook. Of course it is possible and I know that this happy young family will cherish them forever. A brief encounter, Wassa and Malagasy, an incredible vibe. Some people call it karma. I call it Malagasy maheri. Strong, proud and happy. 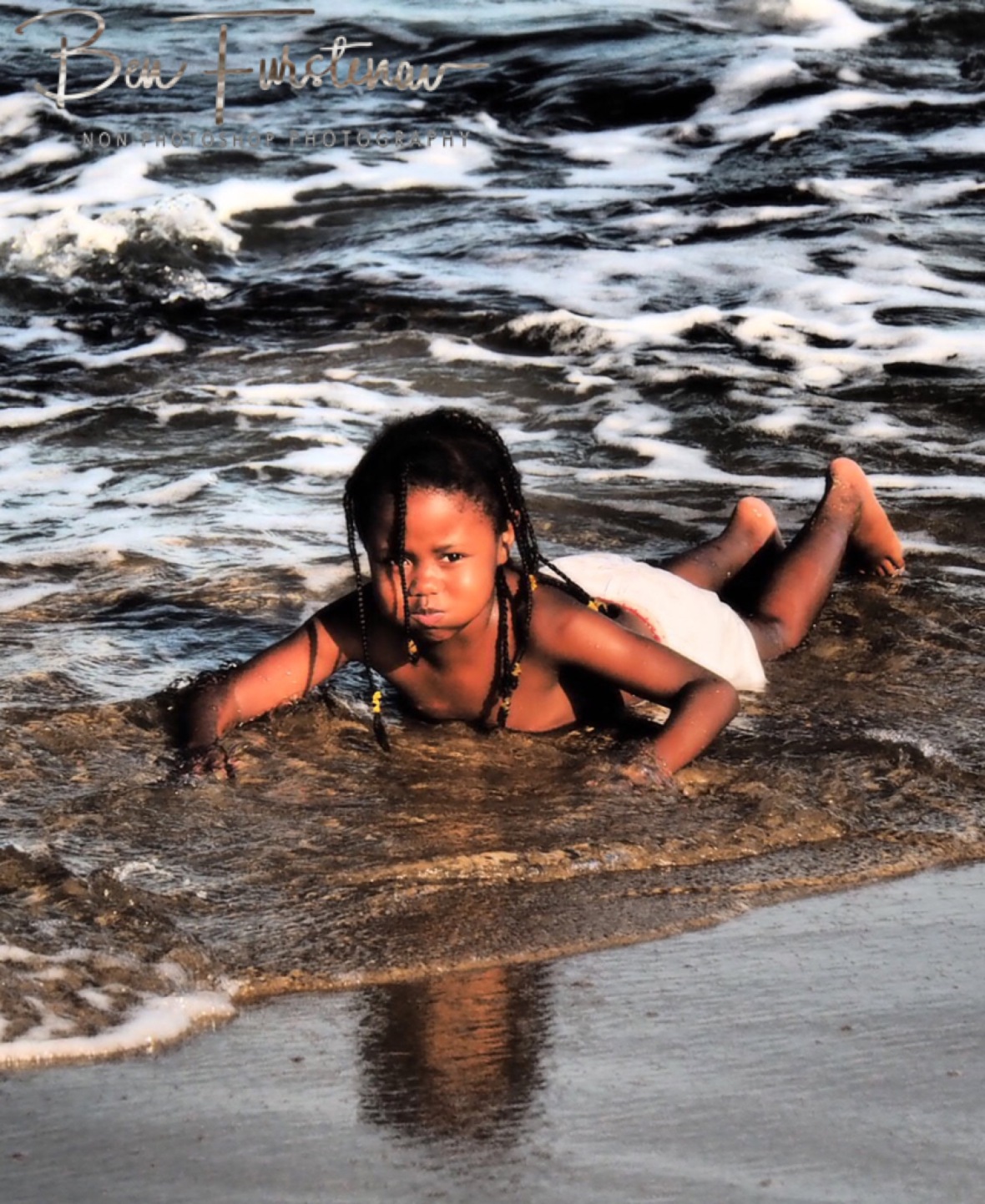 Later that night, I even had mayonnaise served with my chips. Dutch influence. I haven’t seen that here before either, yum…
Small things that make the big difference.

After an unexpectedly amazing day traveling back to Tamatave, I asked Ninah and Odilon for a chat in my room. There were just too many things going on and bothering me, and them. I tried to explain, that we are very good friends and very good friends treat each other with honesty, which follows respect.

What has concerned them most, was the stay at hotel Freddy on the island.
As much as I have been treated well as the rich wassa, even though fake, the behaviour towards Ninah and Odilon was simply disgusting. Instead of a happy salama,or just a salama, they were looked up and down like trash. They were charged for food and an overpriced room, which is unheard of anywhere in Madagascar. All guides and drivers, that bring business to the hotel/ restaurant,eat and sleep for free, in little dormitories. Ripping customers of with overpriced rooms is one thing, but doing that to your own people…? Hard working, happy and proud Malagasy…? Guess this won’t be too well received in tour guide and driver circles.
Ninah and Odilon deserve all my respect to stick it out and stay an extra day, as I asked to. Not mentioning a word of what they are going thru at the time, which I wasn’t aware of.

What concerned me most, was that they turned in to FB show ponies. Selfies here and there, all for show and a negative vibe towards locals, while I was out mingling with locals. It just wasn’t the same smile and happiness when we first met. I showed them the photos of then and now, particularly from our pirogue trip, where the 5 of us just had the best time ever, and not a care in the world. I showed them photos from poor, but happy families. I just couldn’t understand that they were not really appreciating their own country and people, as much as I did. Odilon said, that it is always the way it is in Madagascar; Malagasy vs Malagasy doesn’t have a happy ending, due to different tribes in different areas. Wassa and Malagasy, is a different story. They bring money, that’s why I am received with so much happiness. I agreed to the point of my skin colour, but said that even if I had different skin, my attitude wouldn’t be any different. At least I hope so.

If one is approached with a fake smile and defensive attitude, then that is what they get in return. Why not walk around proud, honest and happy, but respectful, and make eye contact with people, rather then overlooking. I said that they should be showing me and any other tourist, how amazing this country and its people are. They should be the ones, I be taking happy photos of, with their families by the beach, or anywhere. I showed them a few more random photos and by the look in their eyes, I think they understood what I was trying to say.

I hope you do too, it is hard to put in words.
The powerful language of a camera.

It wasn’t that we didn’t have fun the previous weeks, just something was missing.
A big group Bighug and it felt that a lot of weight had been lifted of our shoulders. A fantastic feeling and I am even more so looking forward what Madagascar has to offer for us, the fantastic Three.