The name originated from early sailors, hoping for a smooth and safe passage through notorious rough seas. That was then and with nowadays technology, collisions are almost impossible.

A plaque reminding of treacherous seas, Cape of good hope

However, I could translate it for this dying age. I just hope, that this beautiful country is not slipping further down the rabbit hole. It is those little things that really annoy me. Imagine living here and the smallest task becomes a waste of time.

For example, I arrived at a campsite wanting to camp a night. The gatekeeper told me that I had to pre-book at the library and then pay at the grocery store. I looked at him, asking if he was serious. It’s complicated he said. You think???, I replied. To fill up my gas cylinder, I googled Avrox, a major gas company. I arrived at their outlet and asked if they refill gas cylinders. It’s like going to a bakery, asking if they sell bread. Yes, they do, but when I pulled out the cylinder, they wouldn’t refill it because the cylinder wasn’t their brand…?I know, it is Africa… but it’s still hard to believe on how this country is moving backwards.

Anyhoozle, back to the cape. It was another hot calm day. I was driving from Cape Town along the west coast of the peninsula. Passing through plenty of old days fishing villages, which are now turned in to tourist attractions. One of them was the penguin colony at boulders beach, just outside Simon’s town.

A South African penguin at the colony near Simon’s Town, Cape of good hope

Cute to watch them black and white waddlers interact with each other, although trying to look and stay cool was the priority that day. They smell just as bad as any penguin colony.
I eventually found a traditional camp, pay at the reception campsite and settled for the night.

Another calm, sunny and hot day, I was early on my way for some good hope. After passing through the National Park entrance, paying my tourist entrance fee, I opted for the lighthouse first.

Up there, a 360 degree viewpoint with stunning views in all directions. I was up early to avoid the mass tourism, at least for a while. Even a cable car to the lighthouse was placed, for the elderly, and the lazy. I enjoyed the tranquil views and waters. It’s gotten busy after a while, time to go where not many people go; hiking. There was a trail to the actual cape, with a detour via ‘Dias beach’. 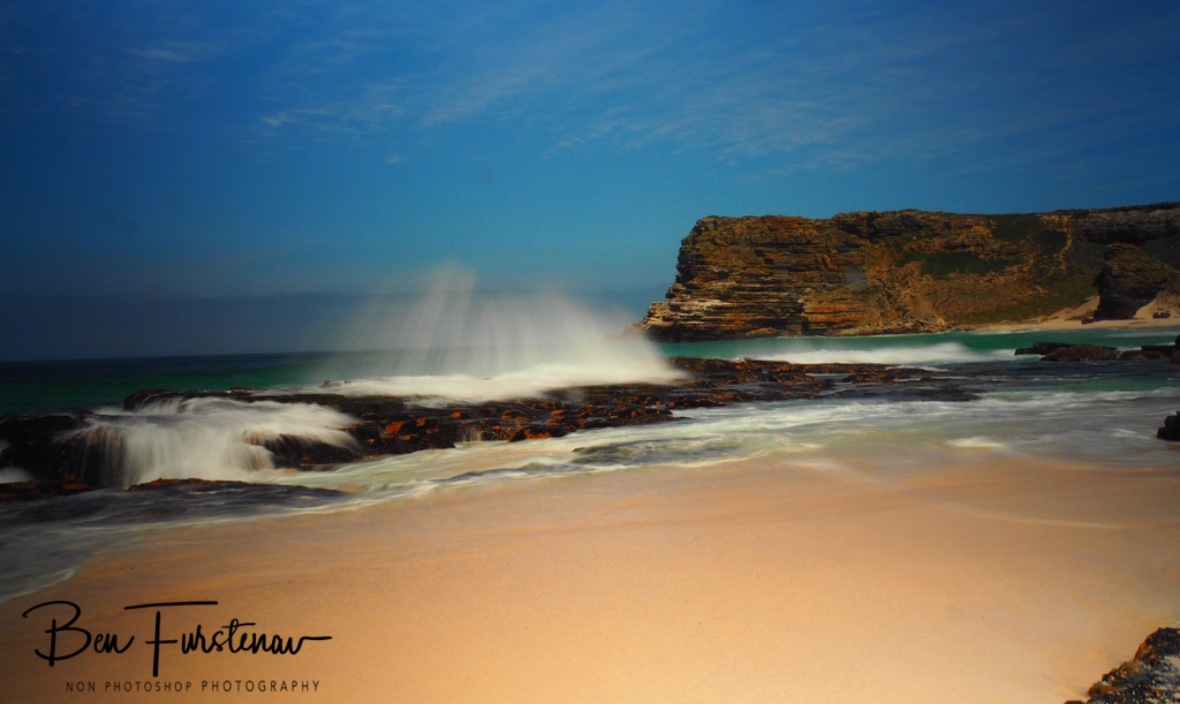 Clear waters on white soft sand, sheer cliffs on each side, and only a couple of German girls enjoying this beach. The swell was relatively calm, but still pumped those rocks and reefs. One can only imagine this ocean on a bad day!

On I went to the cape and took a couple of photos, waiting patiently in line. Bus after bus cramped in to little parking space, it was time for me to move on. Zimba wasn’t alone anymore, he was surrounded by cars and busses. 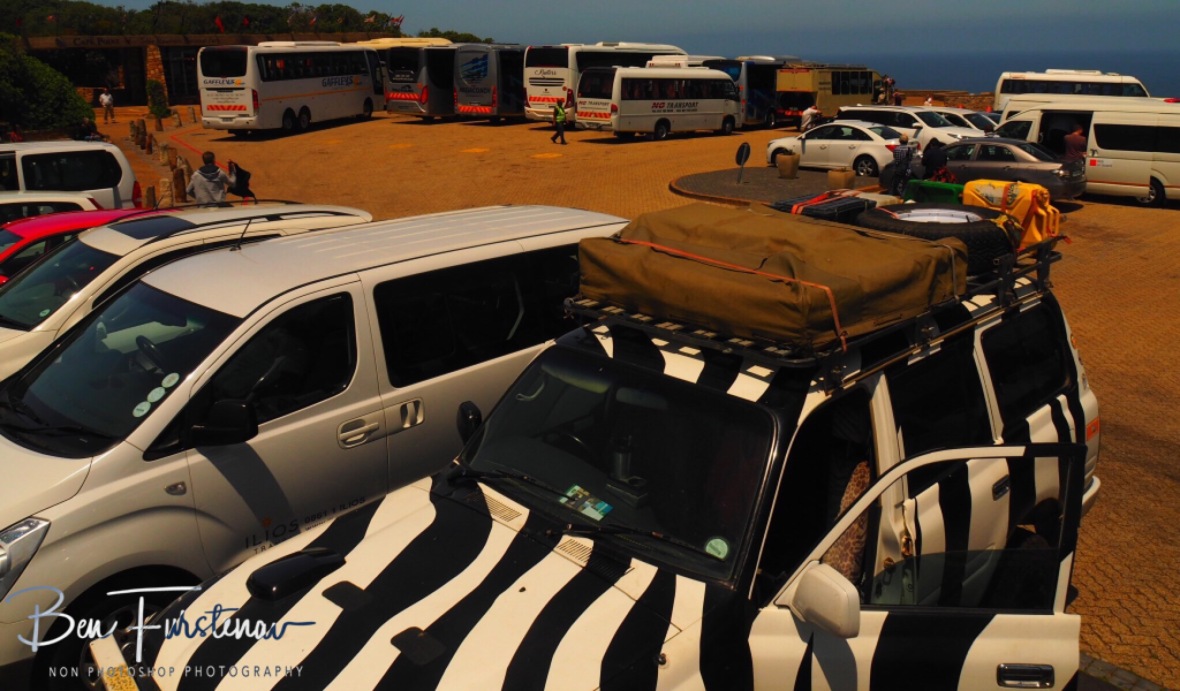 I had lunch at a quieter beach, when an ostrich pair came to join me. How cool was that?

Female ostrich along the coastline of cape of good hope

I drove to the western side of the peninsula and chilled for a while.

Sunset over the cape of good hope

Weather changed the next day. Some dark clouds were rolling in from all sides it seemed, the sun tried to shine through it all. Good photography perspective.

I hiked up to ‘red hill’ on top of the mountain range. Massive boulders on top of each created the peaks of surrounding mountains. Even a dragon rested on one of them.?

A good view to both sides of the bay, whilst thunder and lightning cracked in the distance. It rained on and off, but cleared surprisingly when I got to Muizenberg, another tourist hotspot.

Lots and lots of surfers were in the water, mainly kids and backpacker beginners. They call this beach the ‘cradle of surfing ‘. The swell isn’t big, but constant and fairly long rides are enjoyed. And it’s a sandy beach, no reef to be seen. A whole school class was out and enjoying the freezing cold waters, nice to watch.

There were a few colourful houses along the beach, next to a swimming pool. The calm waters reflected the sunset just as colourful. 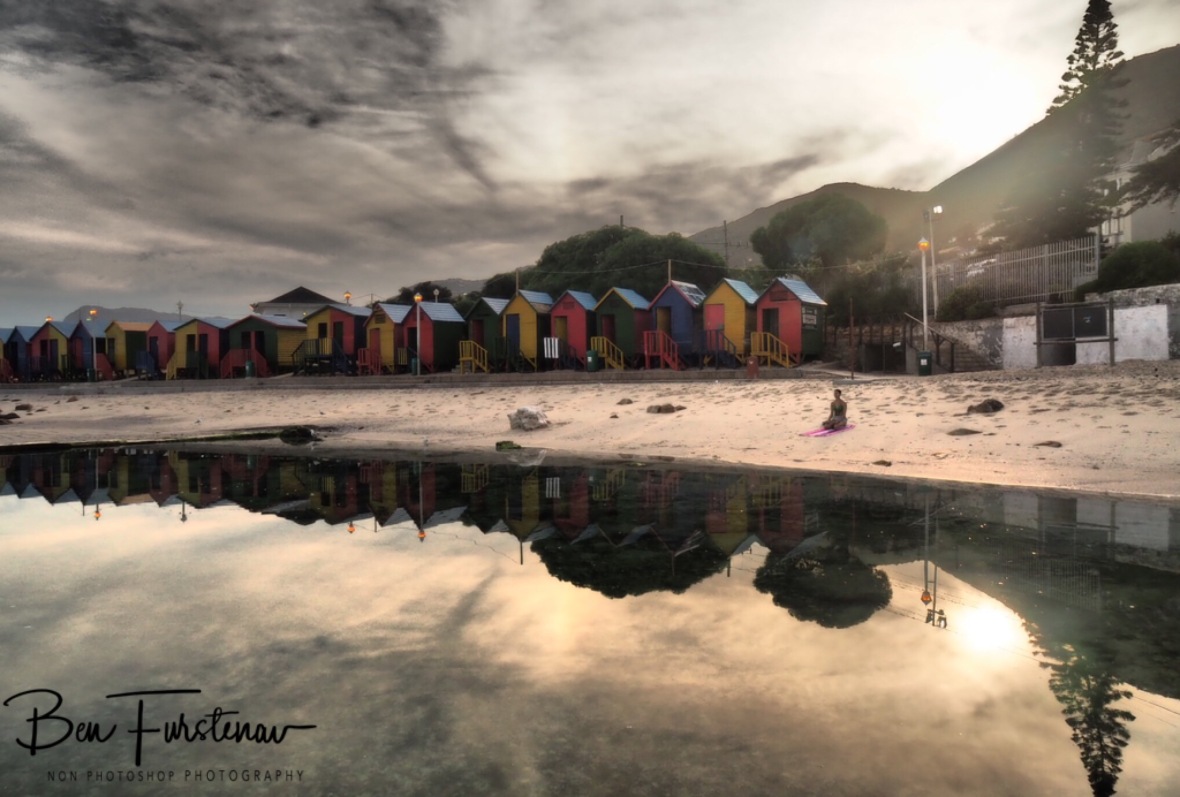 Calm and rough waters over the bay, Cape of good hope

So did the moon. 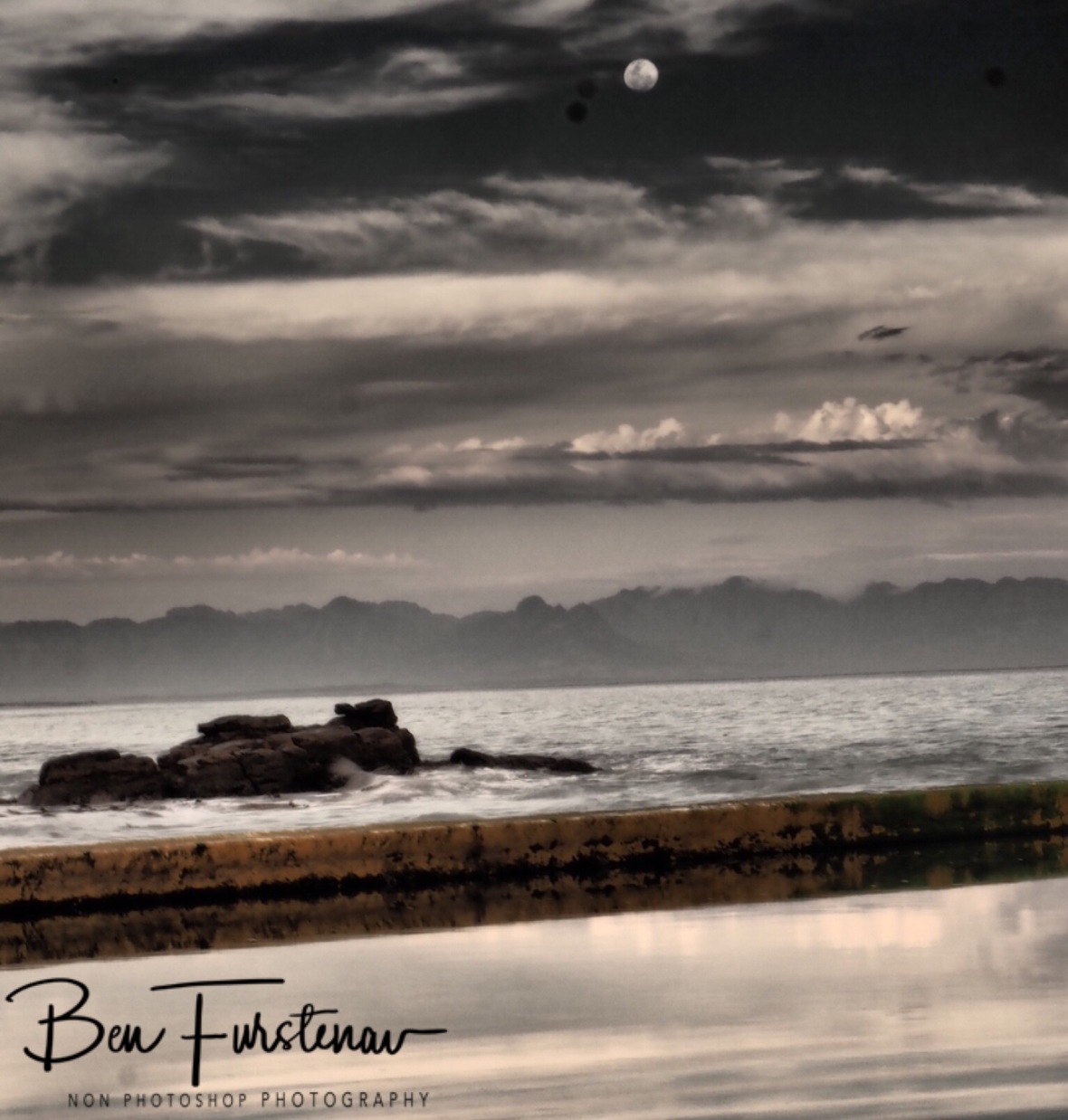 I just made it back to my campsite near Simon’s town, as the build up during the day was unleashed with thunder and lightning, rain and very strong winds. Great natural display though.

It wasn’t only the ‘cape of good hope’, but also the cape of good think. Here I made the decision to delay my African adventure to the winter season. Botswana, Zambia and Mozambique’s plains get flooded in summer, the rainy season. No point in going, if I can’t get to places I want to. As sad as it was, but it was a smart decision. I am in no time rush, Zimba is well kept, and going back to Australia for summer doesn’t sound that bad either. Fair Dinkum.

2 thoughts on “Cape of Good Hope”