I had to delete some photos, names and locations due to the privacy act, I wasn’t aware off in detail. Therefor this post has been updated today.

All in all, life is pretty relaxed here on Machangulo Peninsula, tropical African style.

Not knowing what to expect before I arrived, I speculated on maybe staying 3 days. I ended up staying almost two weeks here. Time flew on some days and stood still on others.

A perfect mix of splendid nature, friendly locals of all colours, water activities,

And Oakley. This all combined to make me extend my visit over and over.

Whenever I could,  I was happy to help out with two things; Photos, and baking.

One night was pizza night. I started a poolish early morning and mixed a very soft dough, long fermentation style. Eventually, they were stretched into thin bases and par-baked, before baked again with selected toppings. 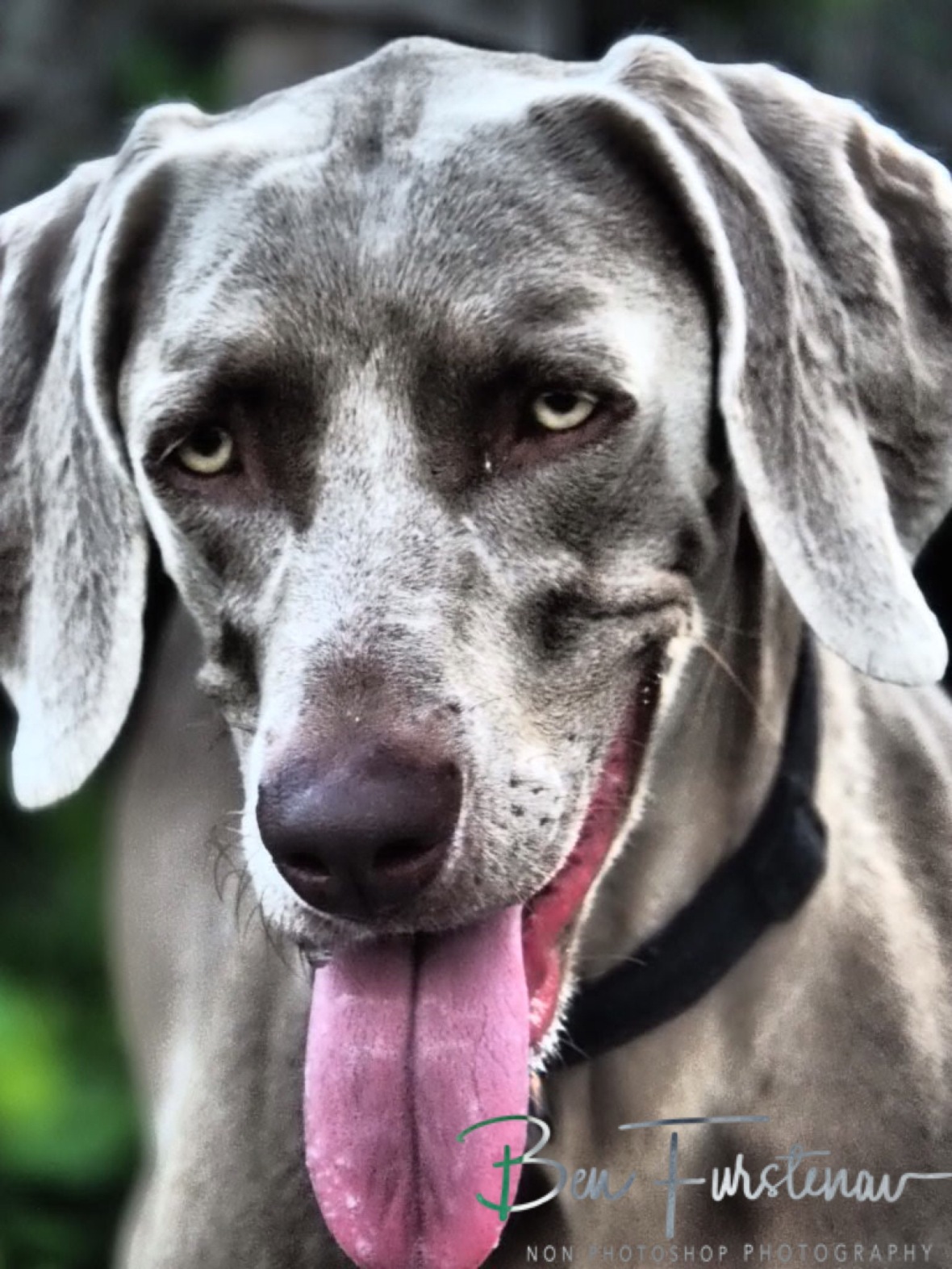 One of Anouk’s expressions, Machangulo Peninsula

Big teddy bear Wessel just can’t resist her hypnotizing eyes. No one can? 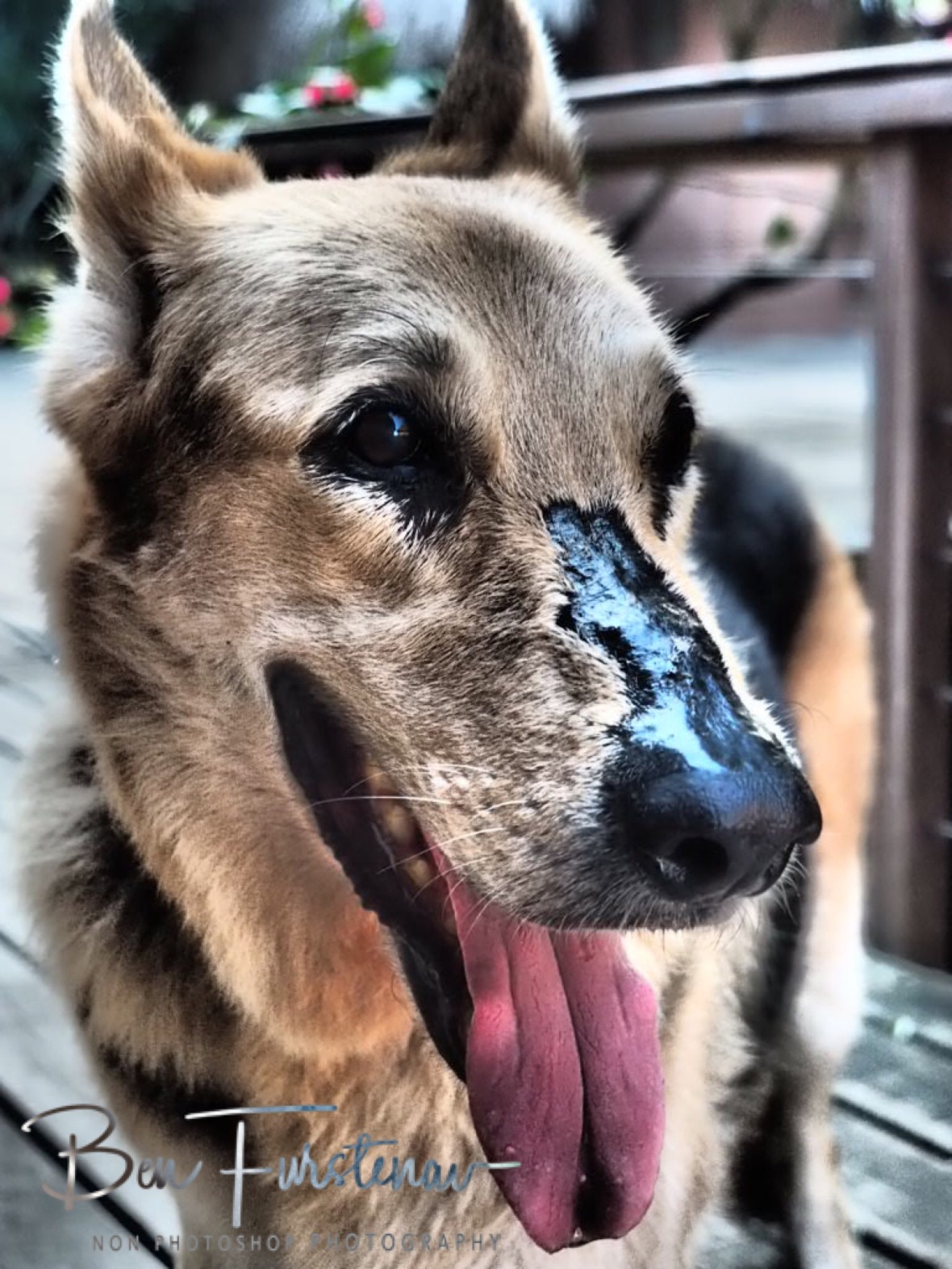 Daniel and Lisanne invited us for afternoon coffee the following day. Sounds great, Christa said. We’ll bring cake! I think we know what that meant…? We were busy in the kitchen on Sunday morning. We needed to bake some bread and cake, that was ordered for afternoon tea at Daniel and Lisanne’s home. With the words ‘Mach mal!’ (You can do it!) Christa handed over the mixer (and Zepter) but kept a careful eye out on my proceedings. It’s been a few weeks since baking fresh bread, last time was at Pieter’s place near Newcastle. Pieter actually facebooked me his last bake that very same day. Ha ha, how like-minded we are, I was happy to reply.

The loaves of bread turned out soft but crispy. For afternoon tea, we made a yeast dough based Cherry/Apricot crumble cake, layered with homemade custard. 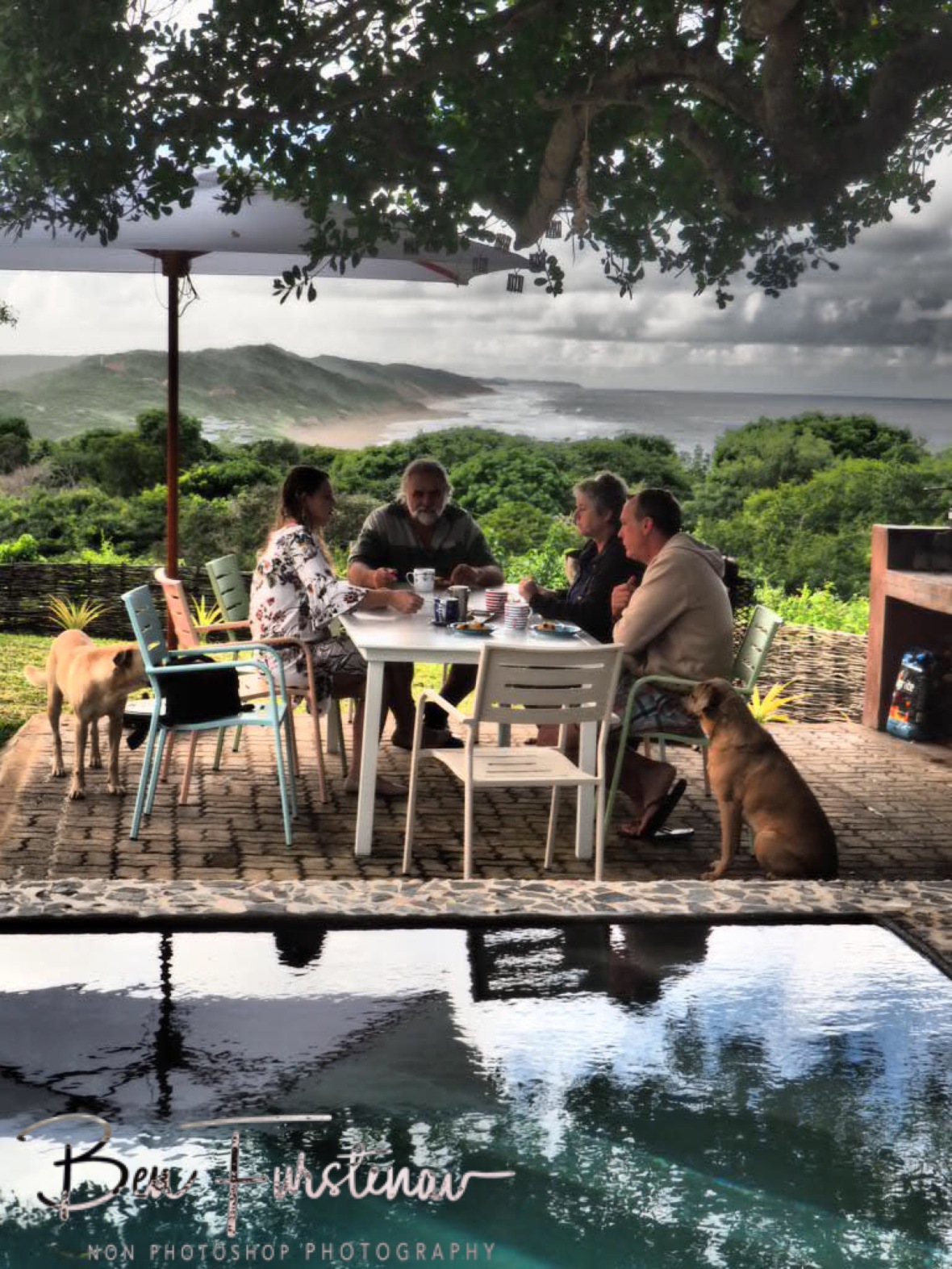 Another happy gathering started with coffee and cake and ended up with wine and Braai long after sunset.

‘Happy’ was very happy about a pair of crocs laying to my feet.

‘Happy’ the dog was happy with the croc, Machangulo Peninsula

He wanted his own pair. How cute he and the other two dogs were. I listened carefully to stories of old being told. Some were interesting and funny,  some were simply unimaginable. What humans can do to each other, particularly in war times, is just unbelievable.

A friend took me out beach fishing one afternoon and lent me his rod.  Crystal clear waters, hardly anyone fishing on this strip of coastline, surely we are able to catch something? Not one bite, not one bit of interest!? Somewhat surprised, I put it down to old bait and dodgy rigging, as we packed in for the day, some dark clouds were heading our way.

I was going to leave tomorrow, but oh well. Let’s go fishing instead! Early morning before or with the sunrise. 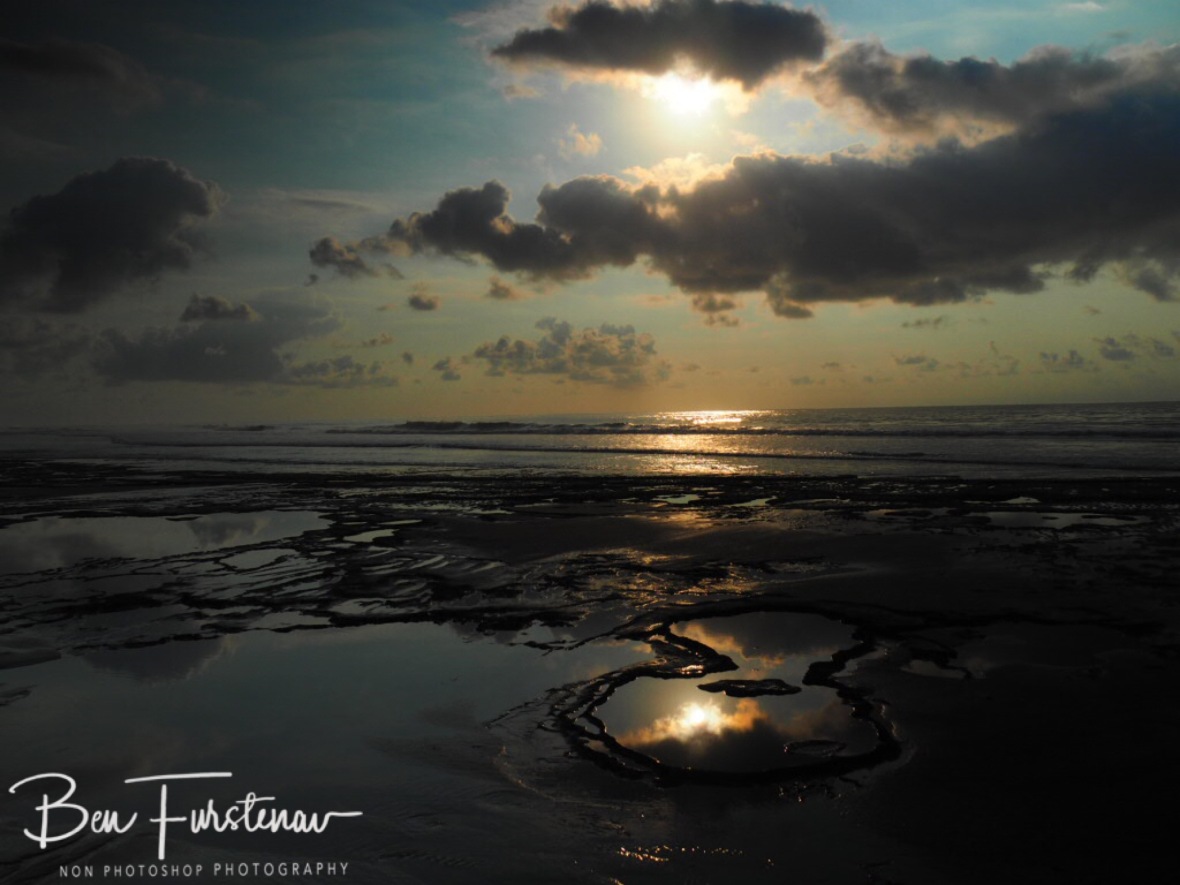 It took a while for the sun to shine through thick clouds, but was even more spectacular when it did. 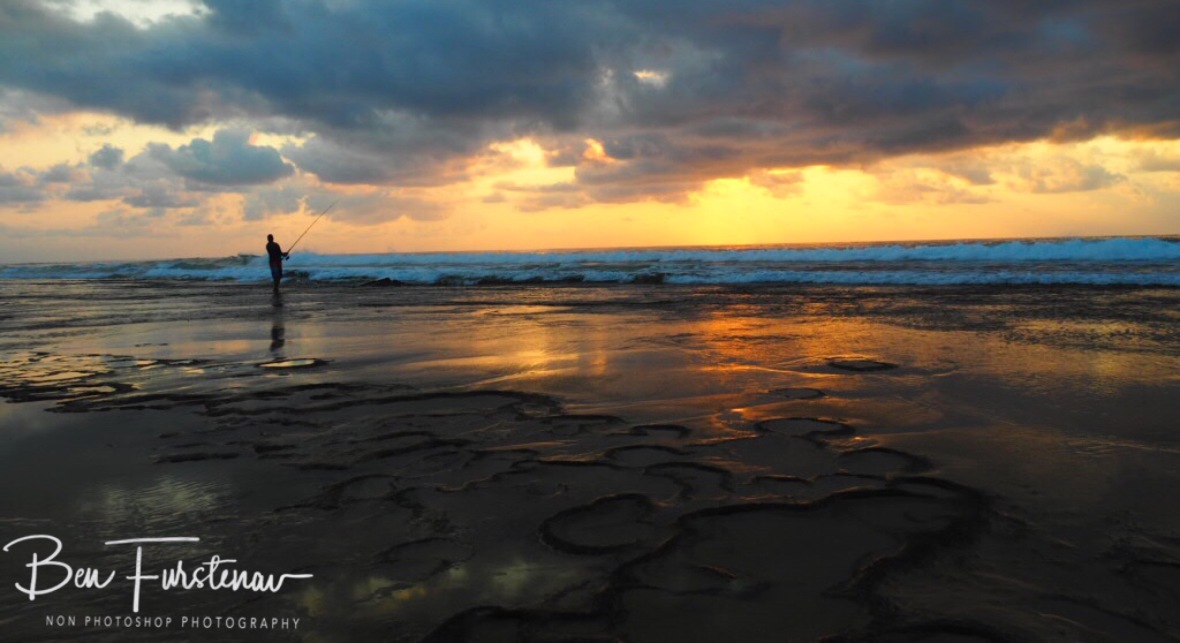 We fished behind a rocky ledge first, with the same result as yesterday. Zilch, and plenty of it. My friend  left me alone on this deserted beach, in and outside the waters. I moved a bit further up was a ‘gutter’ was running out to the open sea, always a drawcard. I changed the rig to a ‘running’ sinker, same technique I use in Australia. But that didn’t improve the success rate, or at least to just have a bite.  Even skinny fishing didn’t help!This was rather depressing.

Not for the fact that I didn’t catch and release a fish, I was just as happy to gaze over the waters and endless sandy beach. Overfishing is in critical levels here. Before the civil war, when Mozambique was part of the Russian empire, those ice cold Russians cleaned out this strip with nets off their fishing fleet. Now it’s the Chinese’s  turn. Mozambique’s strait is in ‘Dire Straits’. A sad and alarming aspect for the future of Mozambique’s marine life. And anywhere along this African coastline. But it sure is scenic here.

Maputo Special Reserve is situated at the southern end off Machangulo Peninsula. I passed through on my way up, but I didn’t see any black elephants. I was going for a game drive with Dino if he turned his mobile off. He didn’t like that, too bad. We left late and got to the gate driving those sandy tracks.

They really have a weird entrance fee system, I find. A foreign tourist pays 40$ Au, which is valid for 48 hours. Which is a fair price, not for a 3-hour game drive though? No leeway at all. To pay the same price again a few days later, when leaving the Peninsula was insane. It is a fairly large National Park, though wildlife is relatively scarce. Still recovering from post-war trauma and poaching, elephants here are known to be quite aggressive and chased many cars. I saw some fresh elephant tracks on the sand tracks in thick bush, some branches and fresh piles on the two-lane track.

I navigated Zimba carefully around tight corners, they can’t be far. I found them in a high grass swampy area, fairly far from the road. 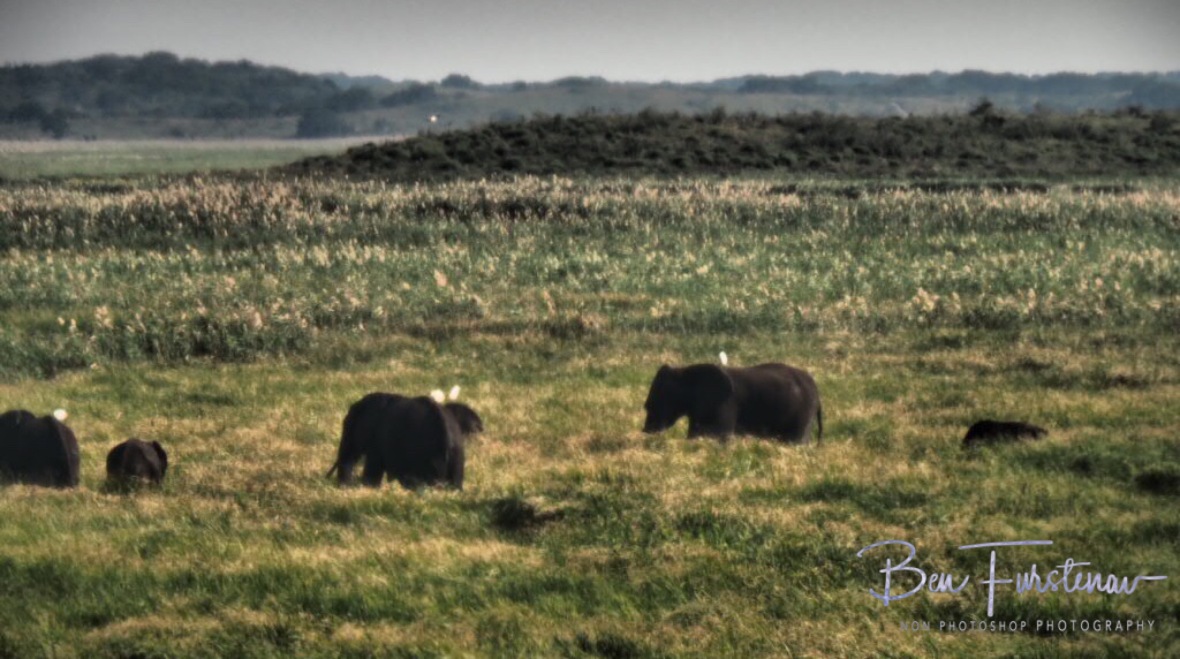 The dark skin isn’t a genetic factor but comes from the pitch black soil these giants have their mud bath in.

No matter how often I see them, it still is an amazing sight.

A tranquil and adventurous spot in Mozambique for young and old, just fantastic.

4 thoughts on “Odds and Bodes around Machangulo Peninsula”