Mozambique’s capital Maputo is described as one of southern Africa’s prettiest cities. With old colonial buildings and lively waterfront, it is well worth a stopover to refill and refuel.

A steam train of old, shiny as gold, Maputo, Mozambique

Thanx to maps.me, I navigated Zimba easily to Fatima’s Backpackers through a typical bustling African Metropole. Helen from New Zealand, who arrived shortly before me, was interested to join me for a wander through the city. Walking and talking, we arrived at the huge and confusing double roundabout, ‘Praça da Independēncia’.

Overlooking this traffic confusion with his finger in the air, was the impressive statue off ‘Samora Machel’, who very much looked like the Cuban legend Fidel Castro. Communism sure played its role in Mozambique history, most concrete building blocks looked like East Berlin after the wall came down. Portuguese colonial buildings were largely neglected, no time and money for restoration. 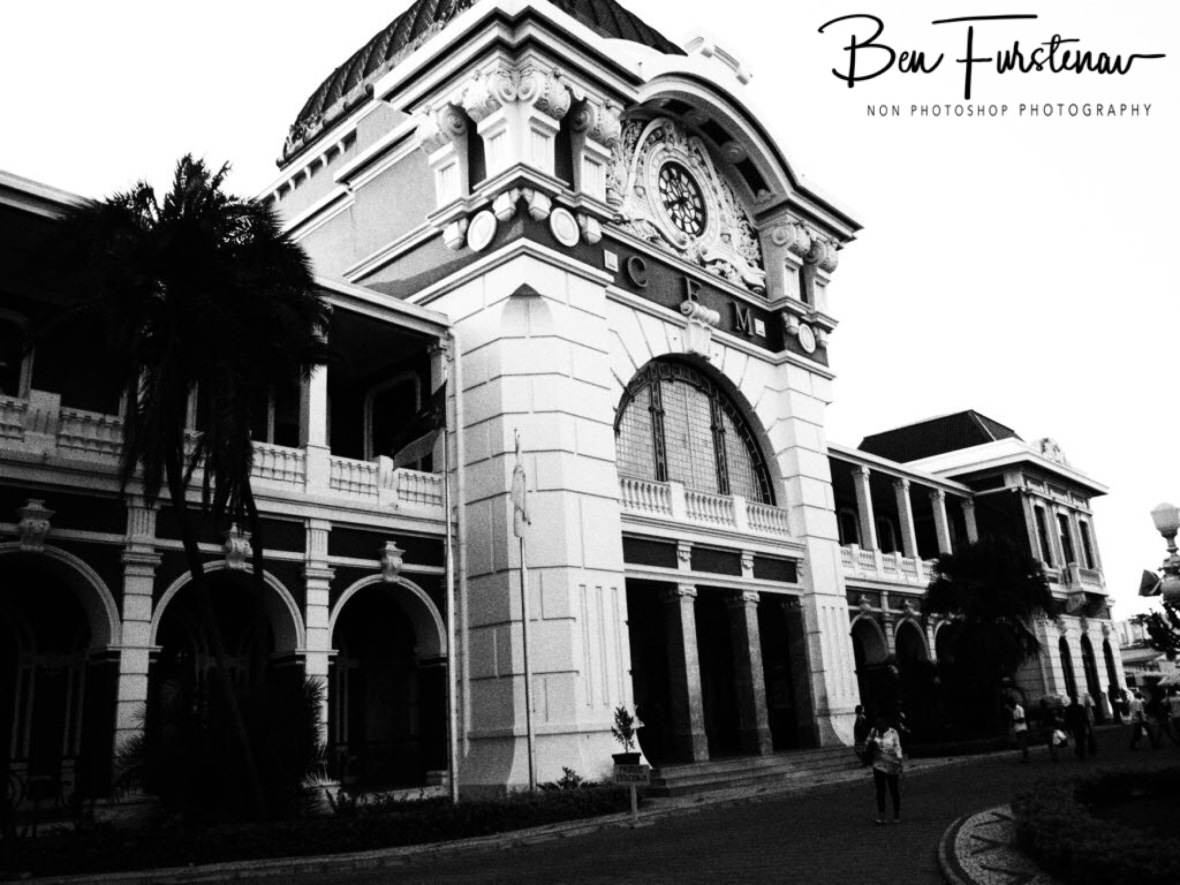 Old steam trains remind of bustling times of old when the Portuguese traded zinc and wood with South Africa. 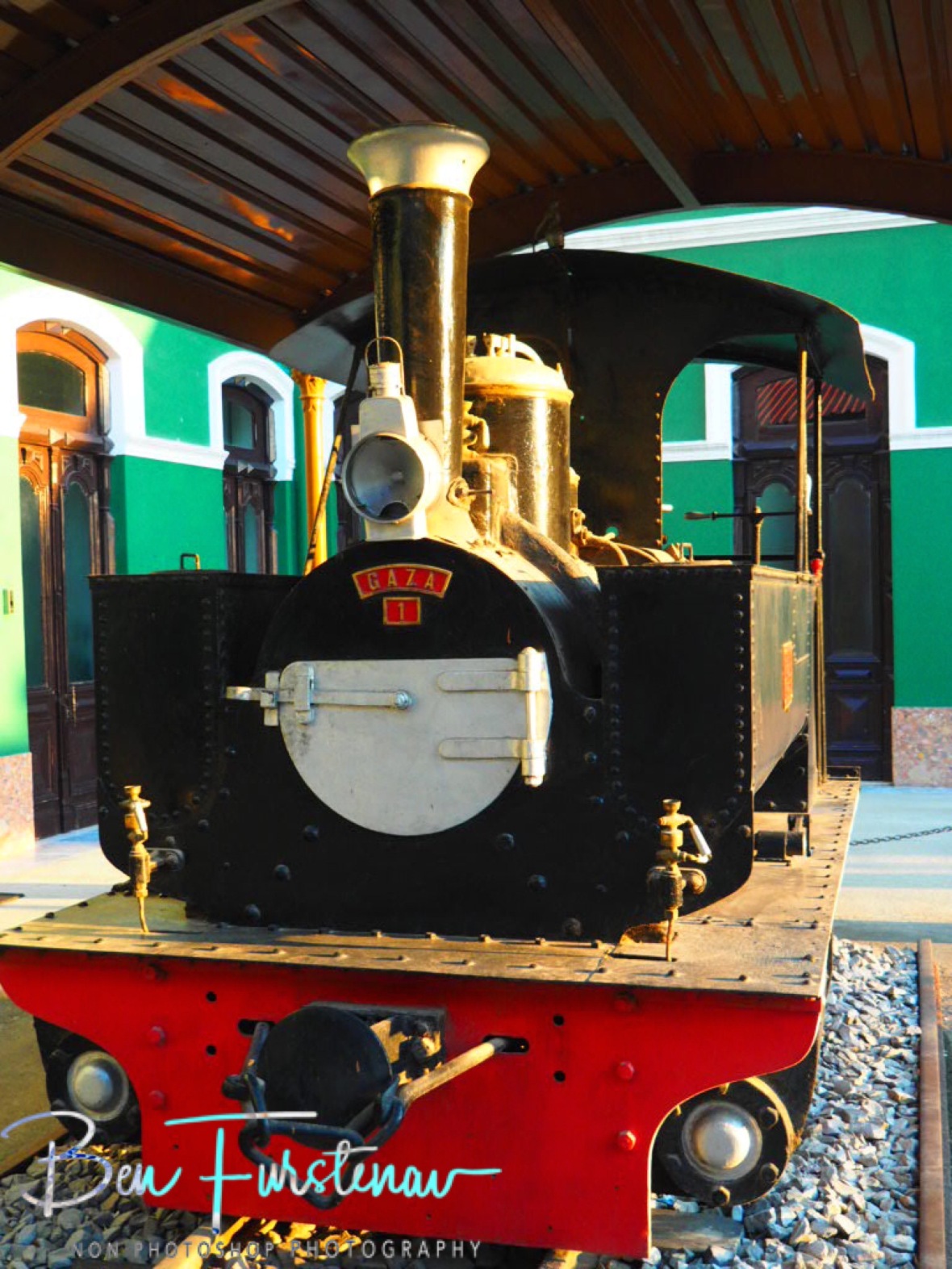 The waterfront had been pepped up and is a great spot to watch the sunset over the newly built, not yet opened, bridge over to Machangulo Peninsula.

Helen had a job lined up in Tofo, the dive capital of Mozambique. She has numerous dive certificates which includes ‘dive master’. I offered her a lift, as Tofo/Barra was my next destination. We left, not very early, next morning to cruise the 380 km’s up north. Being warned about corrupt police along the way, I strictly stuck to the mostly 60 km/h speed limit. I did get pulled over once by a friendly older officer, who asked us how we are and where we were going. Not even asking for driver license or compulsory fire extinguishers, warn triangle and reflective vests. He just wanted to chat. There were plenty of police controls all along, but we got friendly waved through.

Driving after sunset made driving conditions difficult. People, a lot of kids were still walking from school, bicyclists without lights, cars and trucks with either too much or insufficient lights were either driving to fast or too slow. All went well and we arrived safely at ‘Pariango Beach Backpackers’ in Tofo. German owner Jochen greeted us friendly and allowed me to camp on the property, right next to the pounding waves on the beach.

Straw roof huts cater for individuals or couples, dormitories and camping as a cheaper option. The surf shack to the left offers surfing lessons, a restaurant/cafe to the right for healthy tasty meals with a view over the ocean. A vibrant and chilled atmosphere.

Helen got up early too and we watched the sunrise with coffee and banana. She went off to meet her future employer, whilst I jumped into the clear waters of the bay. This little town is built for tourism.

Every building along the waterfront had accommodation of some sort. But there weren’t too many tourists around and locals were desperate to sell their product. A little too pushy for my liking.

I decided to stay a night in Barra, about 15 km’s north.  A smaller village with less party atmosphere.

Plenty of resorts lined the beachfront as well, with not many tourists being around. Yet, more and more are being built. It appeared that a new resort opened at the same time another closed down.

Dhows were sailing the swift winds. I mapped out a campground at the lighthouse, right by the beach.

Driving along a sandy 4 WD track, passing more luxury accommodation options with little communities settled in between palm trees, I reached the lighthouse and the caravan park. 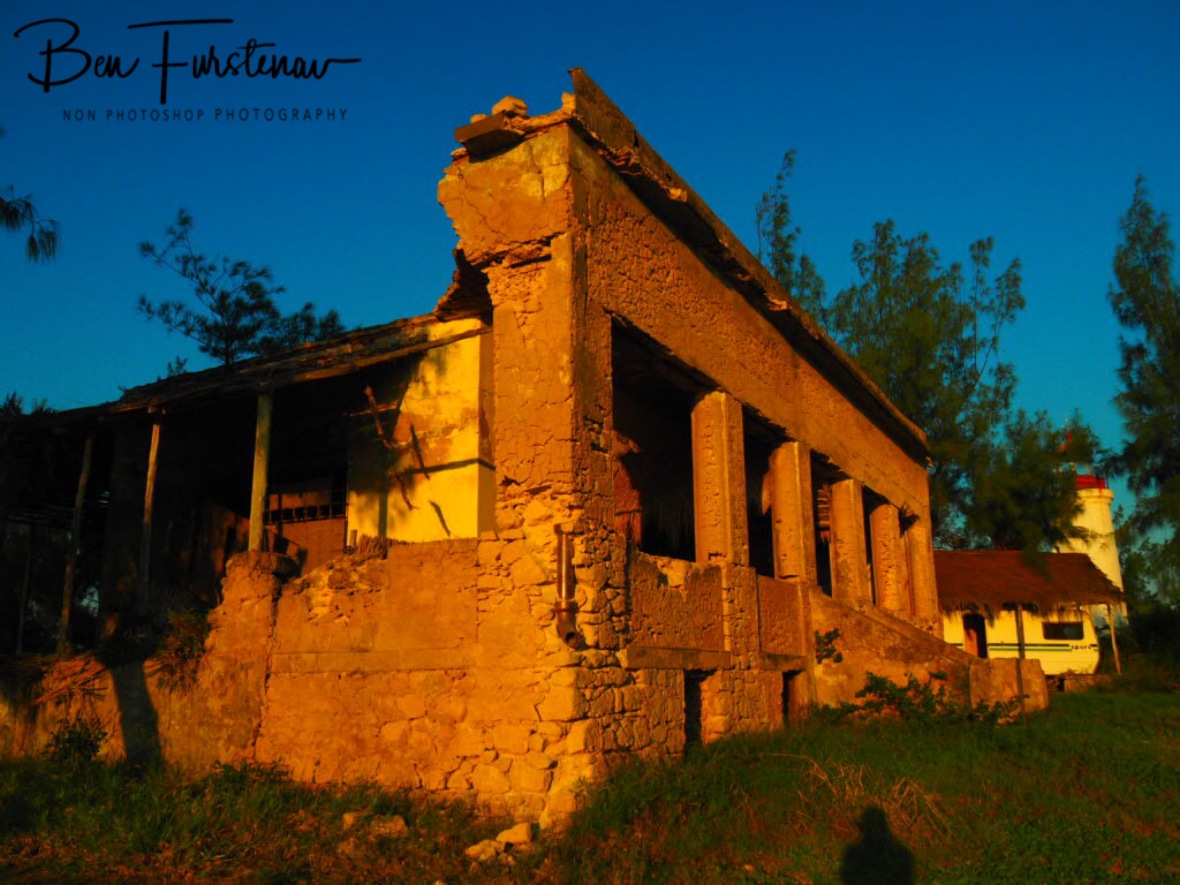 Or what’s left of it. The office building was in ruins and no one anywhere near to be seen. Even better serenity.

Luxury right near the water, to close to comfort on high seas and high tide, Barra beach, Inhambane, Mozambique

Walking along the beach, some of the resorts are closely built on the edge of the water, that in time the buildings will be washed out. 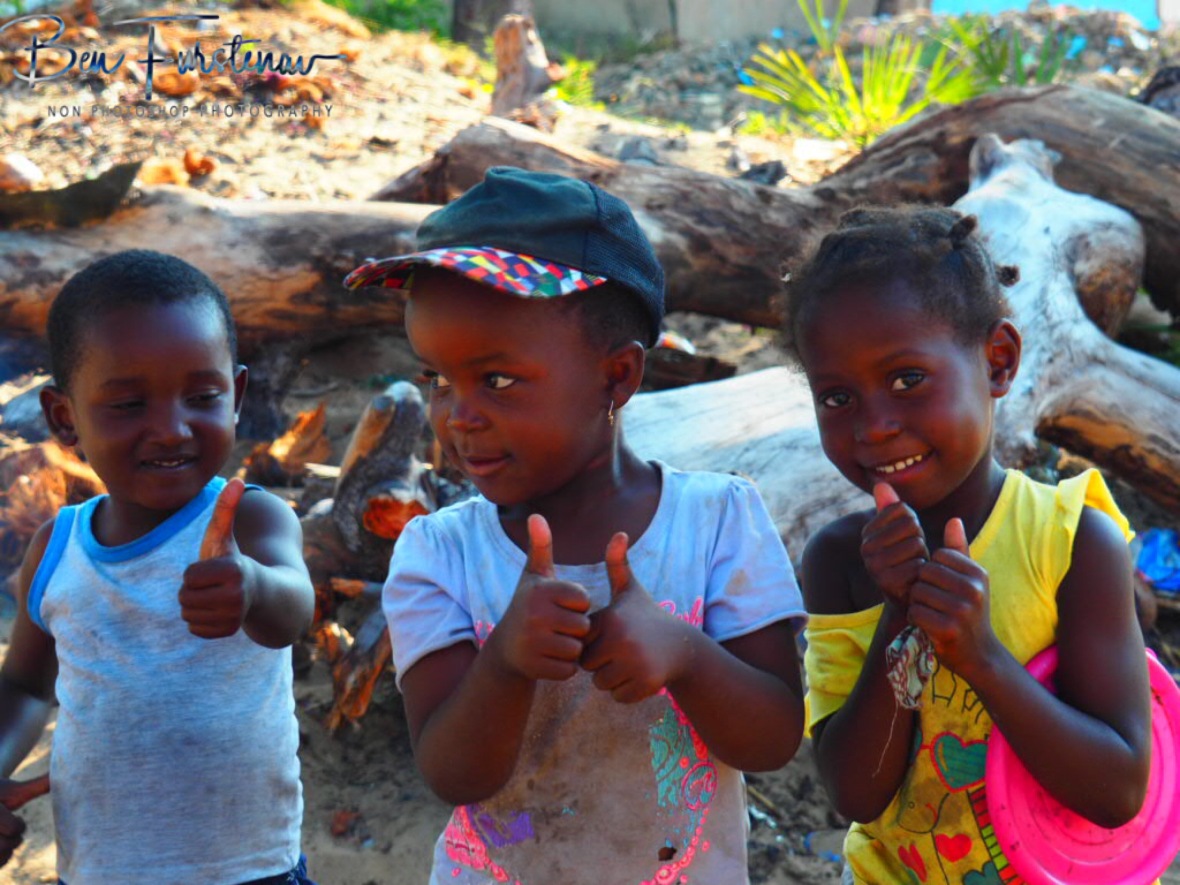 Thumbs up from all, Barra beach, Inhambane, Mozambique

The small communities in between palm trees seem quite tranquil, but living here is just as tough as anywhere else in Mozambique. But kids were happily playing and giving me the thumbs up.

A high five followed after I showed them their photos. Really cute.

Watching the sunset over meanwhile choppy waters as the wind picked up, I am always looking for another objective to add to sun and waters. I found a tree stump throwing a shadow only on receding waves, not on dry sand.

It looked quite intriguing. Watching the almost full moon rise in tranquil surroundings was bliss.

Until the lighthouse keeper scared the living jeepers out of me. He appeared out of nowhere from the darkness without a light and stood all over sudden in front of me. He asked for 200 Meticais as camping fee, a fair price for tranquility. 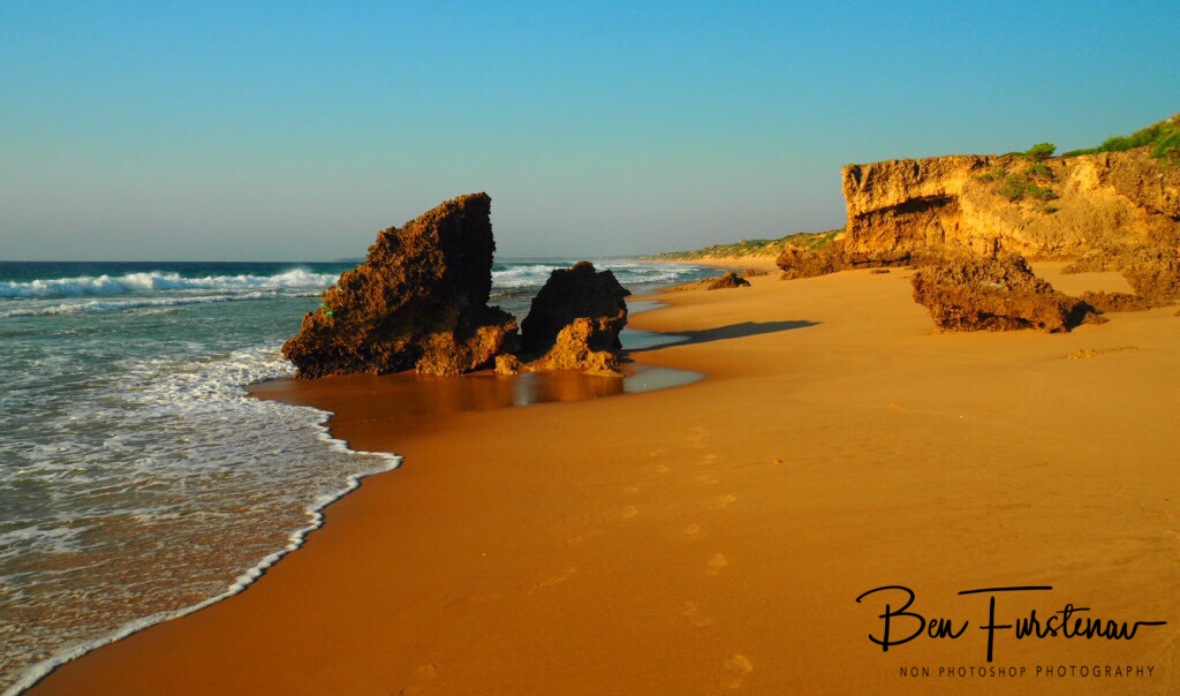 I was up for sunrise and opted for a walk along this beach. A nice way to start the day. It was still very windy though. 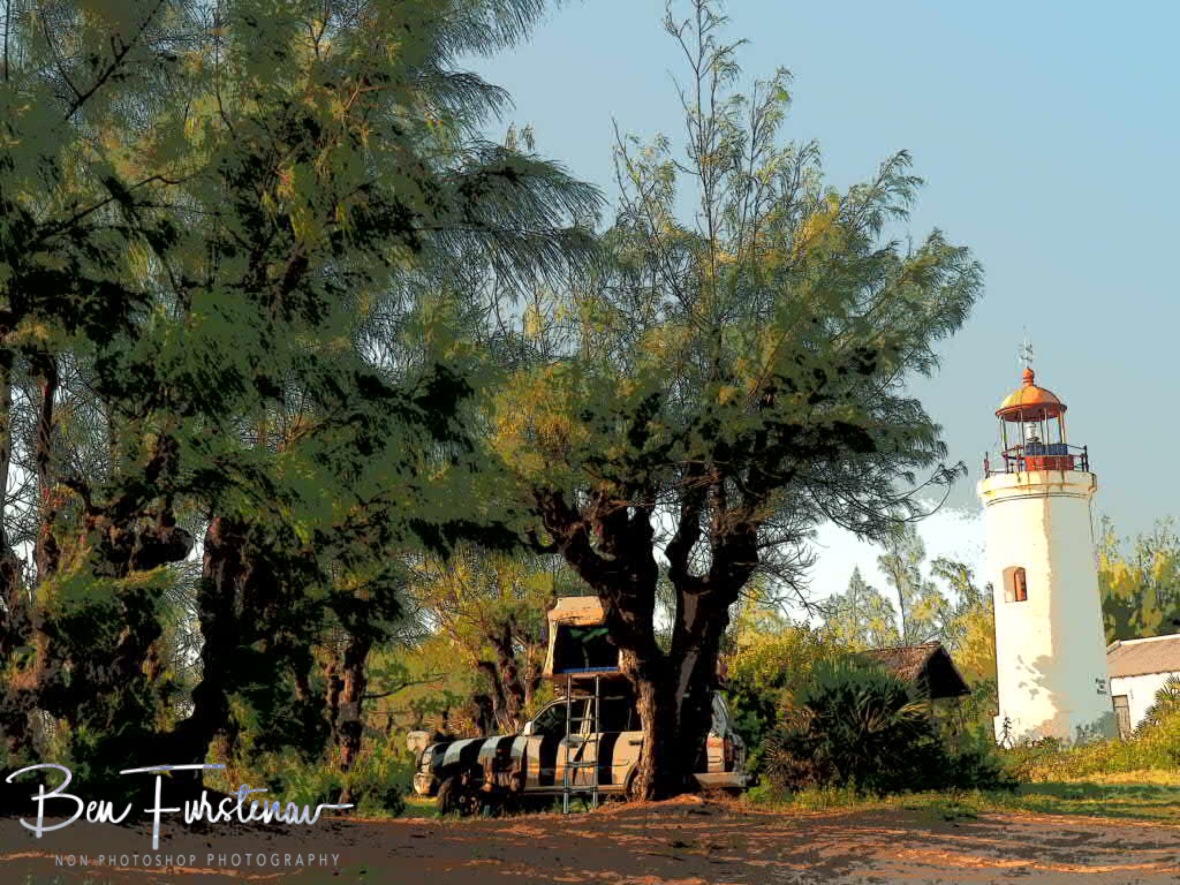 Being back at Zimba, a local woman appeared out of nowhere, selling locally baked and fried specialties, as well as bananas and mandarins. 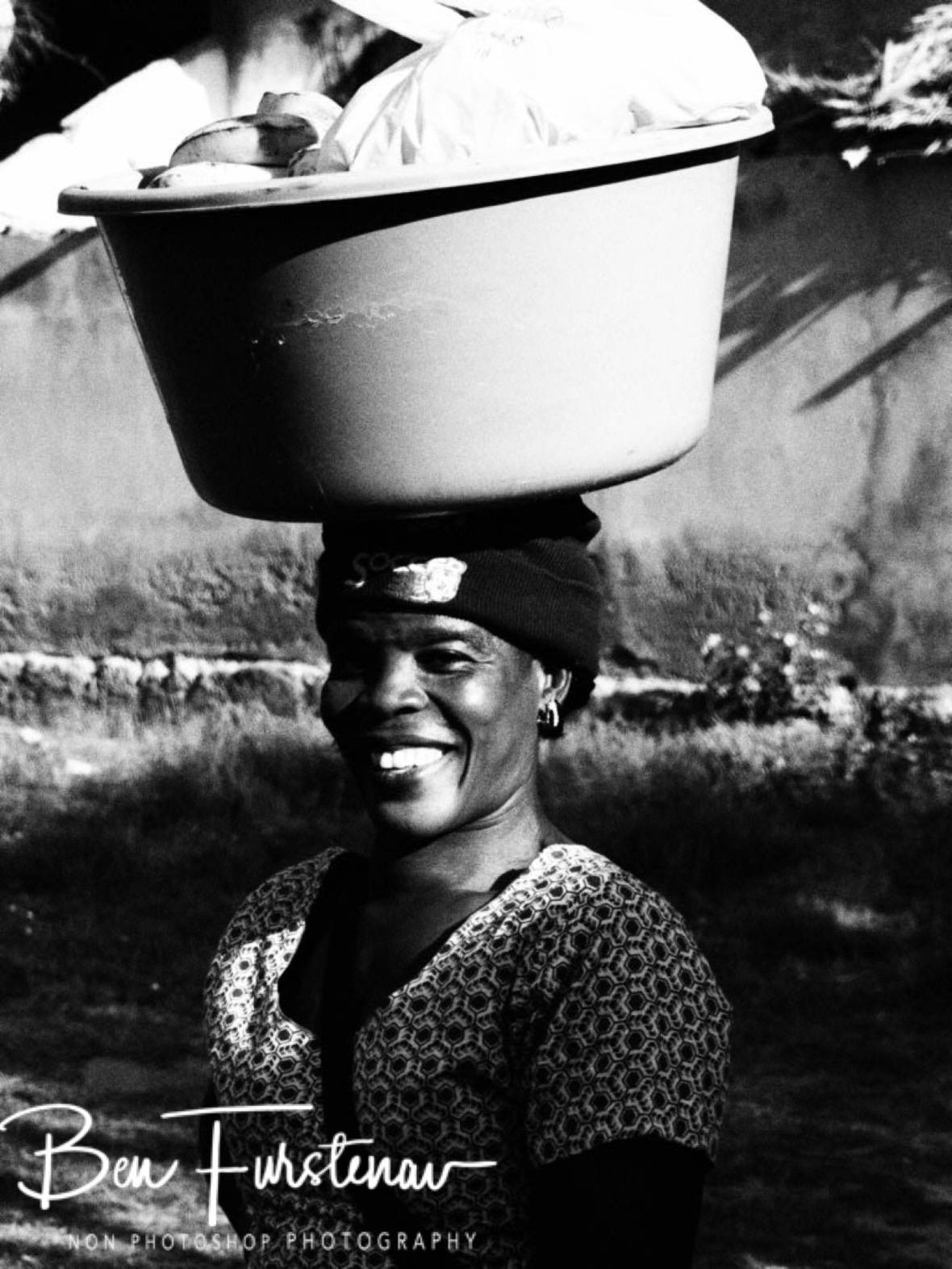 The lighthouse keeper told her, that I was camping here. She takes the bus every day from Inhambane to Barra to sell some bread and fruits for a living. Life is tough in Mozambique, jobs, and money hard to come by.

She was very outgoing, happy and friendly and came all the way from Inhambane! How could I resist this home delivery service. A few photos were included in the price, priceless.

8 thoughts on “From Maputo to Tofo.”