Whilst driving into the drier Tete region in central Mozambique, it became clear that I will have a rendezvous. Nothing as romantic as you might think, and in most peoples eyes, not your usual romance with a Mozambique beauty.

A passion and obsession that started in Madagascar last year, reignited again.

The Baobab tree. These scurrilous, yet mysterious and majestic looking trees are just simply fascinating.

Like giant alien antennas reaching to the skies, in different sizes and shapes, how can I not be impressed? 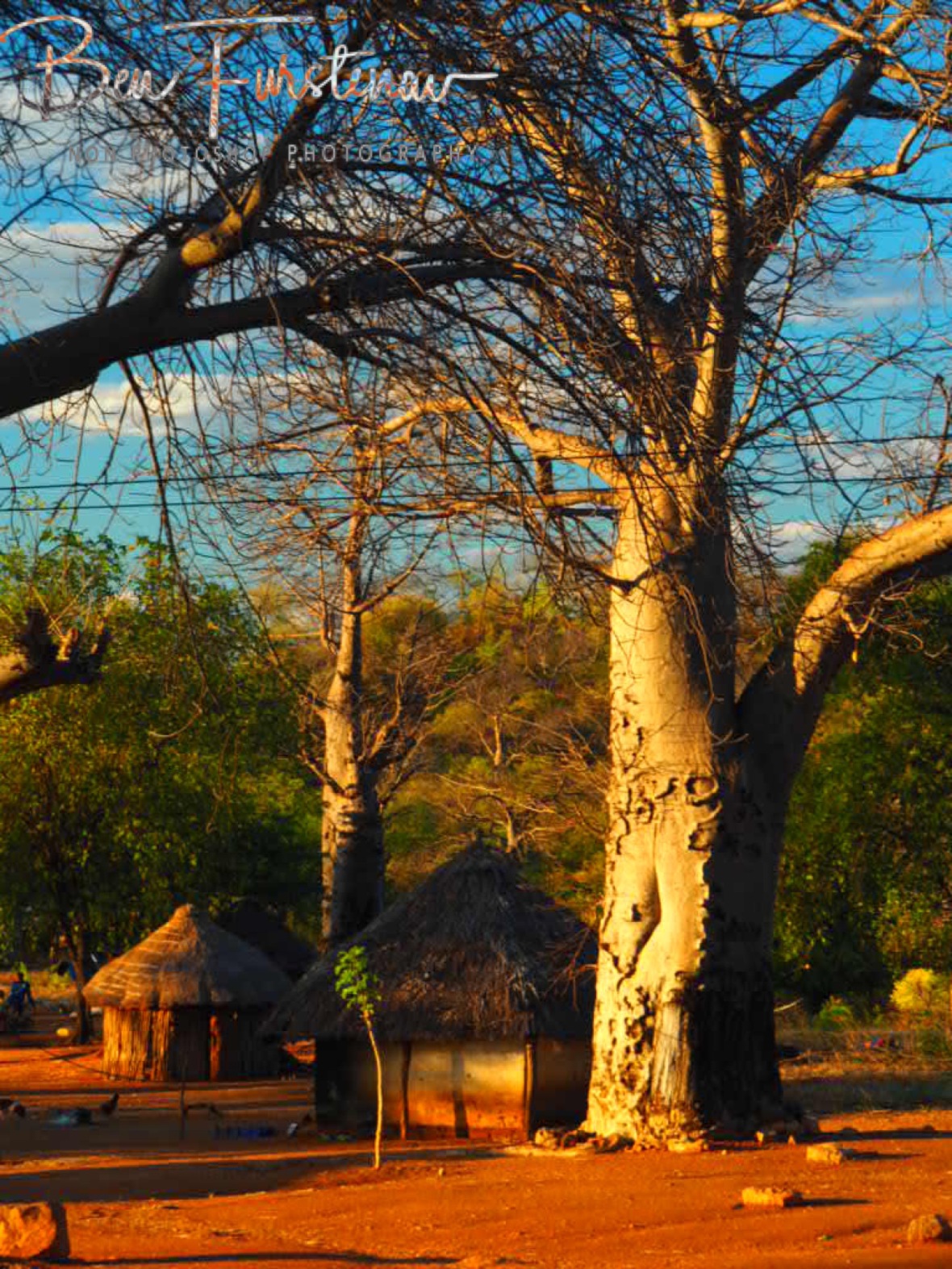 To the north along this highway are little communities nestled in between and around Baobab trees, something magical indeed.

In the land of Baobabs, one thing is plenty; dust! And the other is scarce; water! It makes life even more challenging on this poor land.

Driving along the N4 with the sun setting out west, I just had to pull over for a few sunset photos.

Tete itself isn’t an exciting city from the tourist point of view. It is a great stopover to or from Malawi or Zambia and lies on the famous ‘Zambezi River ‘. A modern arched bridge crosses over the Zambezi, a busy congestion area.

However, it gives you a good view out over the bridge and surrounding islands. Quite stunning early mornings after sunrise. 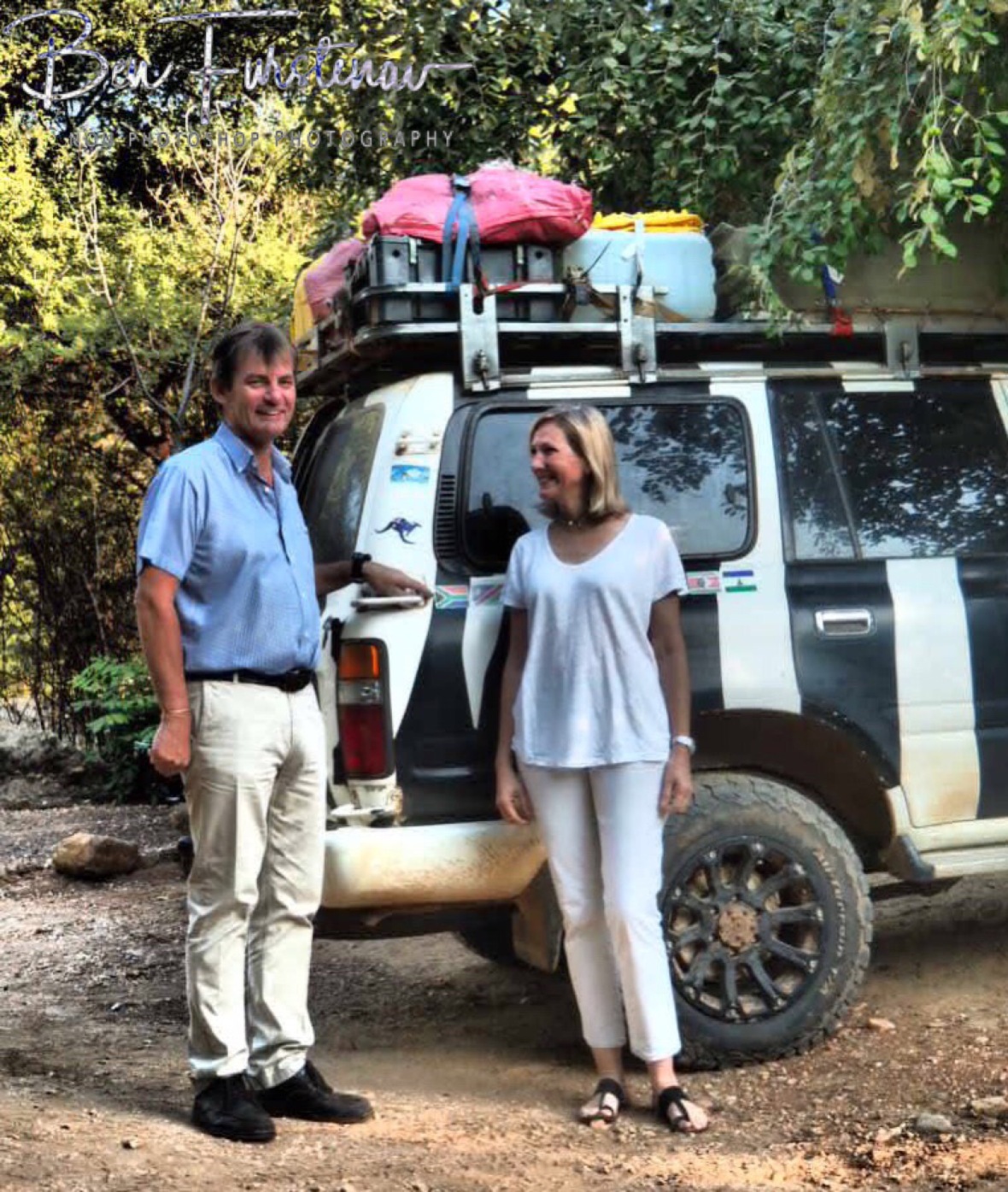 I stayed a couple of nights with my new Couchsurfing friends Kate and Mark. Both are originally from the Eastern Cape in South Africa and have been living here for some years. They teach kids in a private school, whose parents work in the tobacco plant, a multi-million dollar industry.

My date was planned. I knew what (Baobab), I knew what time, (sunrise or sunset) but I didn’t know where. 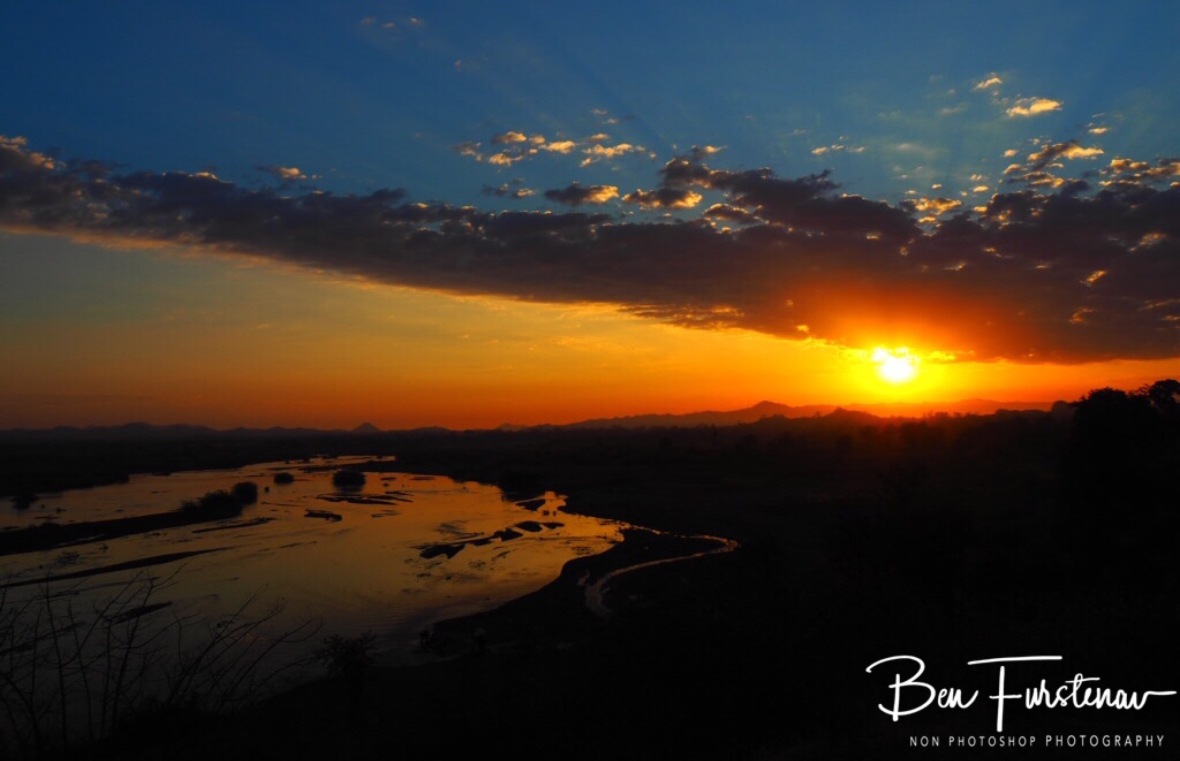 Even though Baobab trees are plentiful here, in an ever-growing city, with coal mining and destruction for constructions by the Chinese, made finding the perfect spot a difficult task. Kate pointed out a few possible locations on the map. I was looking for an either very flat, clear area or Baobab trees elevated on a hill.

Kate and Mark are early risers too, doing different morning exercises on different days, before facing screaming kids in the classroom. Today was mountain biking. Quite some determination.

I left early morning before sunrise to scout the area. I spotted some Baobab along the River Revubue. The sky turned orange already, I can’t waste any more time. The Valley was covered in mist, looking ghostly among the Baobab Forrest. 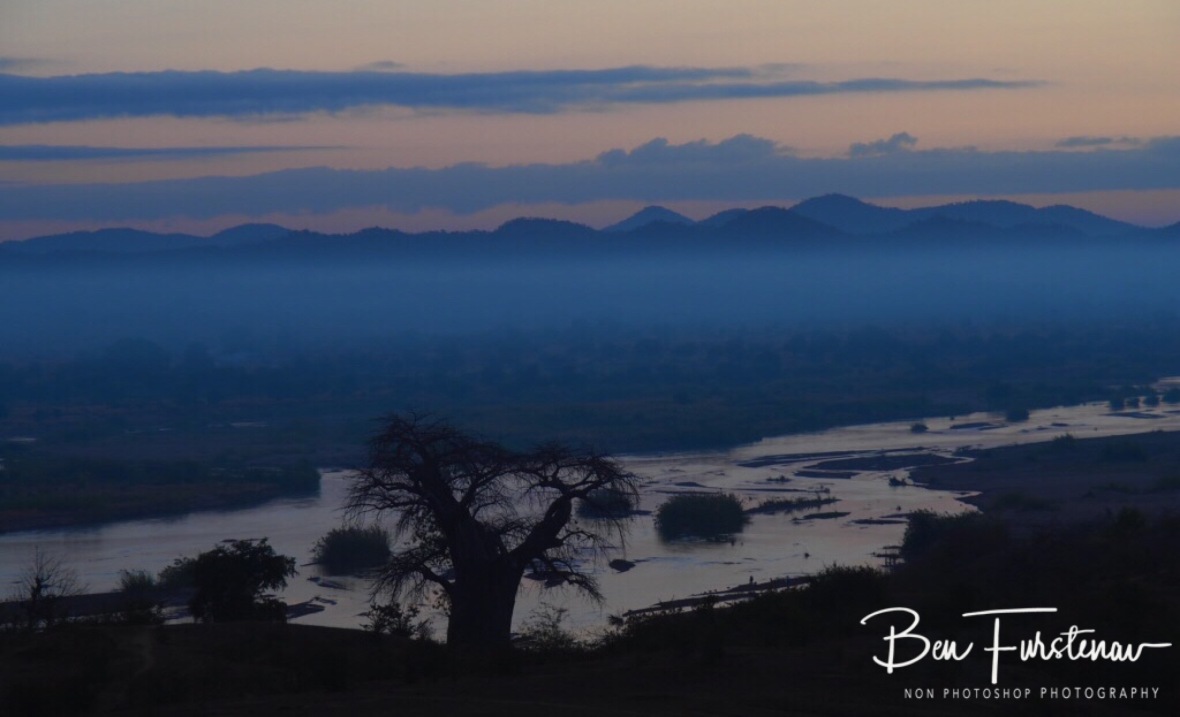 Singled out by the river, Tete, Mozambique

A single Baobab stood by the river, adding perspective to the faraway mountain range. The sun came up in colourful fashion behind clouds, looking spectacular.

A single Baobab tree on a hill took most of my interest, standing tall in front of the sun and dotted clouds. A great start for my rendezvous, not quite perfect yet.

Kate pointed out another Baobab Forrest area behind the airport. Tall giants lining dry and dusty terrain near and far. 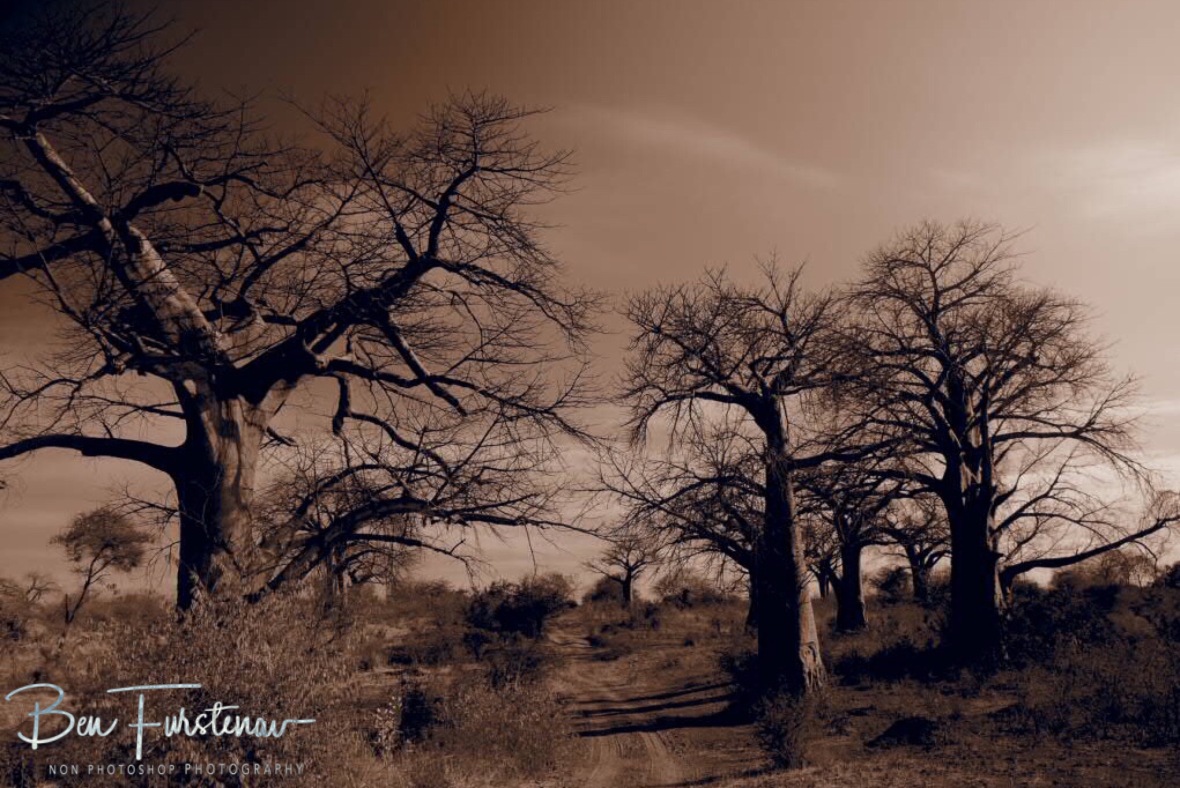 Similarities to the busy ‘Alley de Baobab’ on Madagascar’s dry west coast were imminent, yet, not another soul was around. Zimba and I didn’t mind at all. 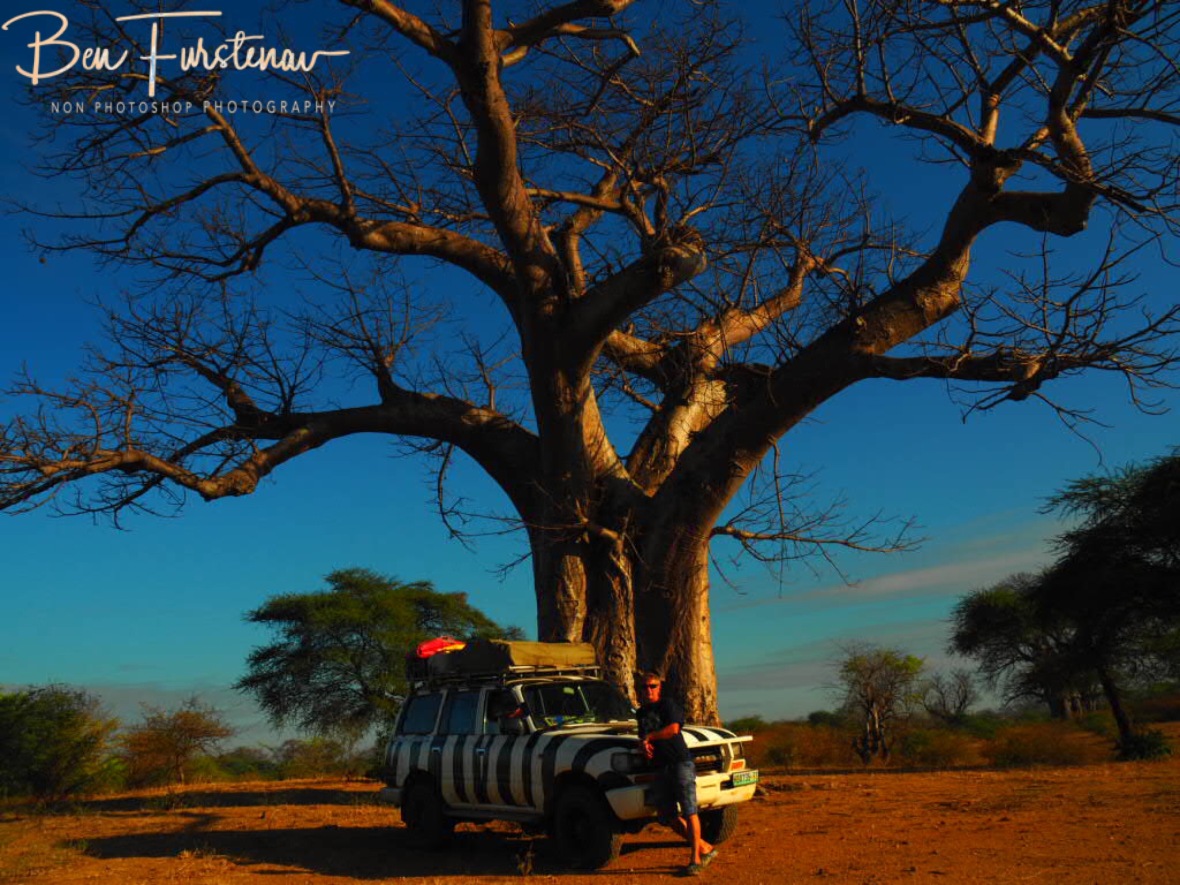 Another early morning wake up call, another rendezvous with this magical tree. Mark and Kate are running today. Good for them. I drove to the same spot as yesterday morning but walked along bone dry mud gorges, carved by torrential flood waters.

Early light reflected clouds on calm waters of the Revubue River, resembling a flow of lava. A group of Baobabs stood tall against a cloudy skyline. The sun came up from distant mountain ranges.

Rising up behind a tall mountain range, the sun lost its red/orange glow. Yet, another colourful display.  Shadows from the rising sun were impressive.

By the river, Tete, Baobab

I was happy with my Tête-à-tête, quite a stunning encounter.

Reaching to the skies, Tete, Mozambique

I raced back to farewell Kate and Mark before they run off to school. We had time for a coffee and a quick chat before they both raced off again for the purpose of life.       Thanks again to Kate and Mark, for sharing their humble home with a complete stranger.

It was time for me to bid farewell to Mozambique. The Malawi border doesn’t lie too far ahead. Muito obrigado, Mozambique.

3 thoughts on “Tête-à-tête in Tete, Mozambique”