After spending weeks around the busy oceanfront, it was time for some tranquility in the mountains. I read about the ‘Chimanimani Mountains’, lying in the western highlands that border Zimbabwe.

Chimanimani is local Shoni language and means ‘Im Gänsemarsch laufen’. Which means as much as walking in line like geese, due to narrow and steep tracks. Let’s see if we can find some of these geese.

We left Vilankulo not as early as hoped for, due to lack of sleep, caused by too much beer consumption. There was no bus going north today, so I gave Svenja and Finja a lift to Inchope, where the south/north highway meets the east/west highway. Driving the first 150 km’s was a slow affair. Infamous large potholes and increasingly careless, dangerous speeding bus drivers to meet their time schedule are a hazard to all. 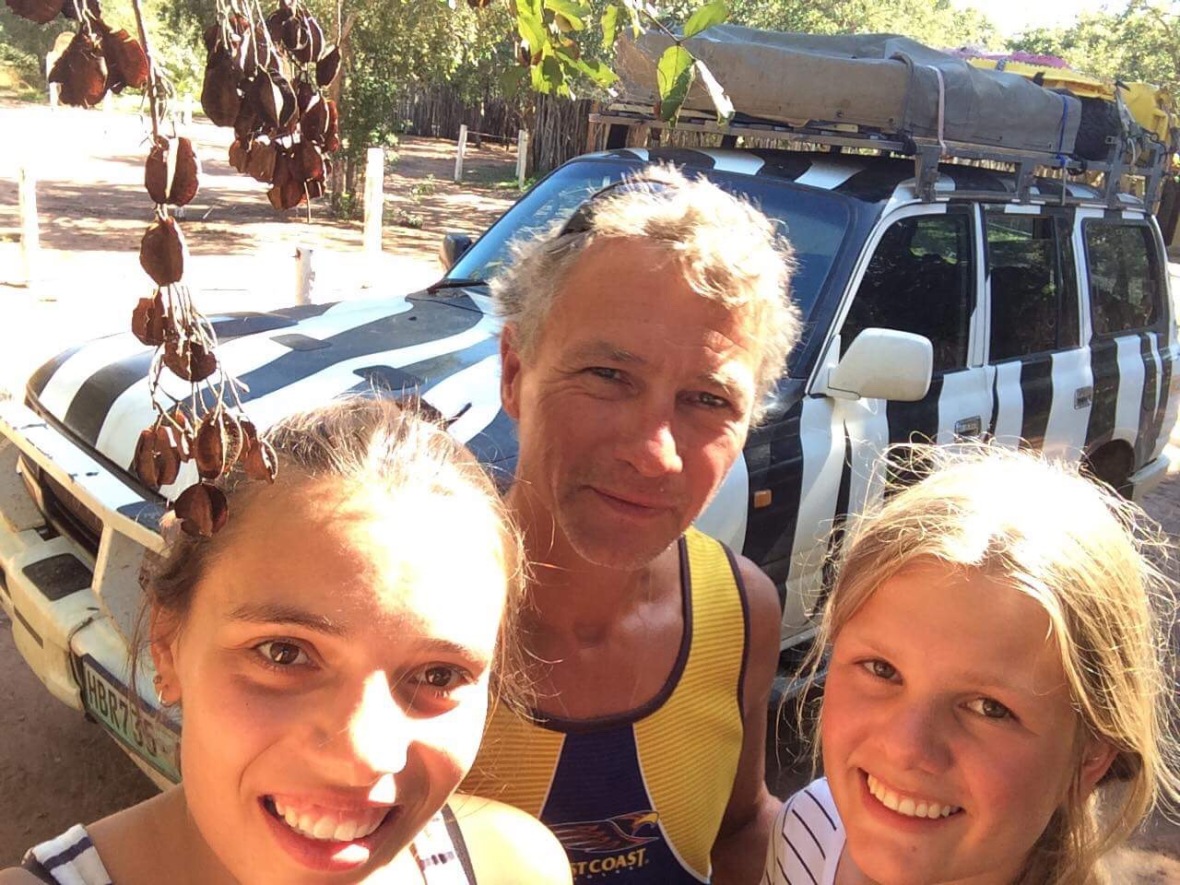 Svenja took over the power and steering of Zimba for a while, to give me a rest. By then, road conditions had largely improved. We stayed overnight in Inchope at a very basic, but friendly motel, playing Yahtzee to the amusement of staff and ourselves. 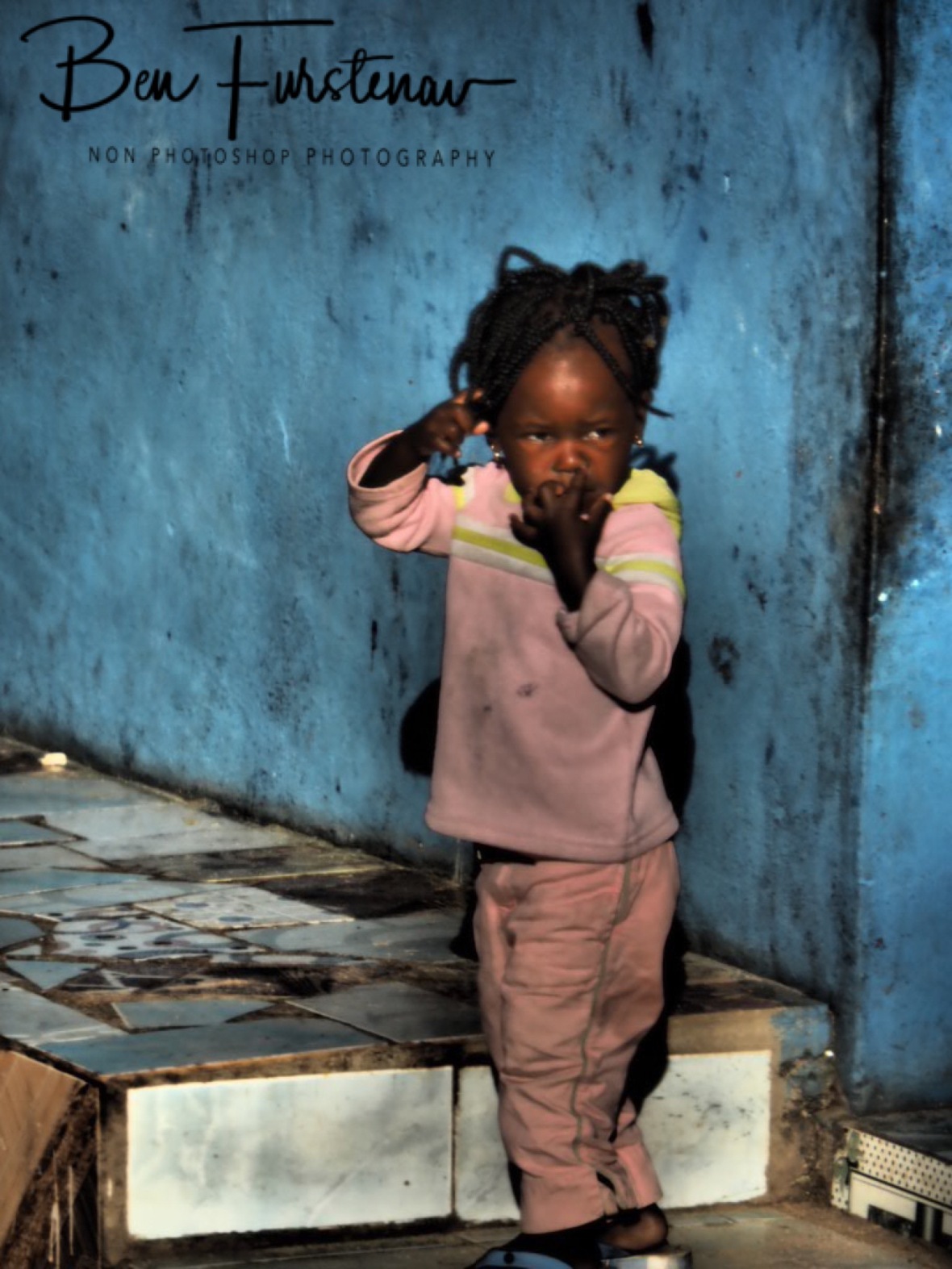 I dropped them off at the bus stop next morning and wished them all the best on their journey. I was hoping for some information about the ‘Chimanimani Mountains’ in Chimoio, but that didn’t happen. I just have to push my luck, and myself and Zimba up the mountain.

The dirt track leading towards this mountain range was surprisingly well maintained. Dreading deforestation from previous areas I been to, this area and mountains are still covered in native forest. Clear blue sunny skies added to an impressive picture. 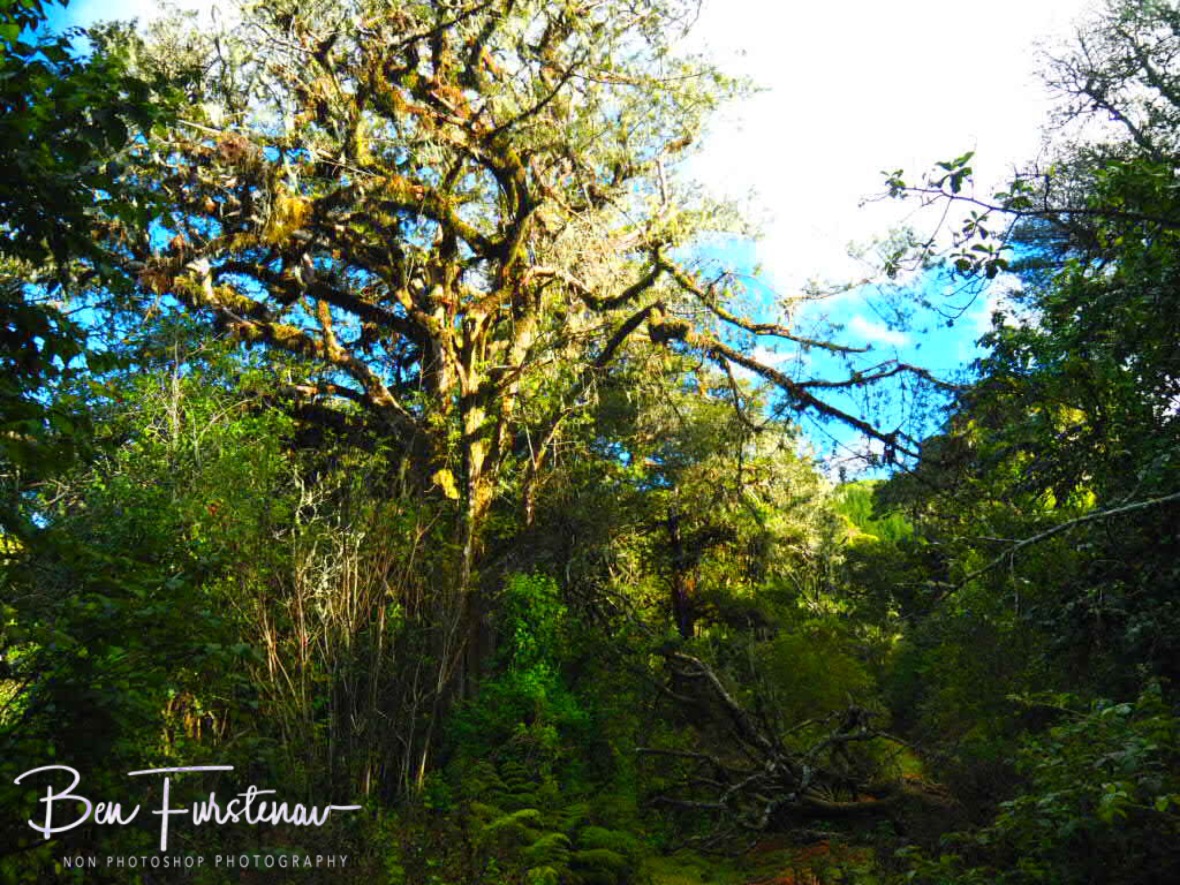 Passing little communities and surprised but friendly faces, I reached the uphill track to Mt. Tsetserra.

Climbing up the mountain track in 4 WD Mode gave spectacular views, Zimba was excited too. 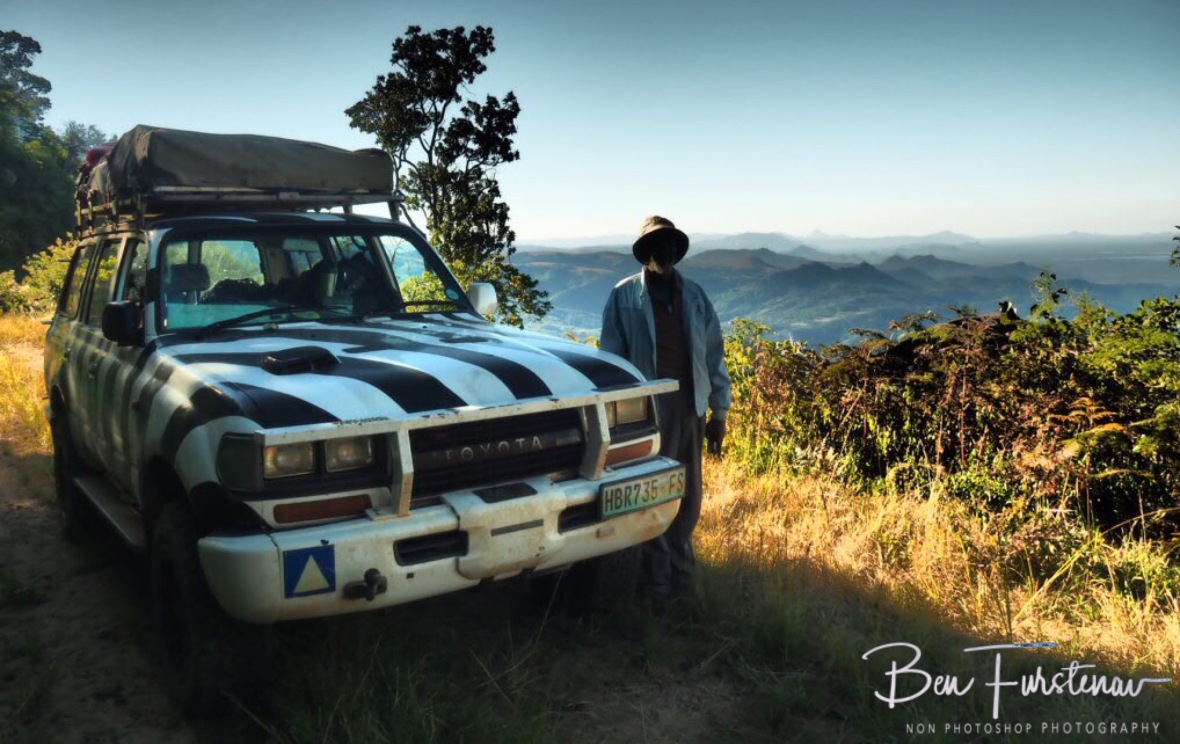 We met a ‘chief’ along the way, who jumped in for a ride. 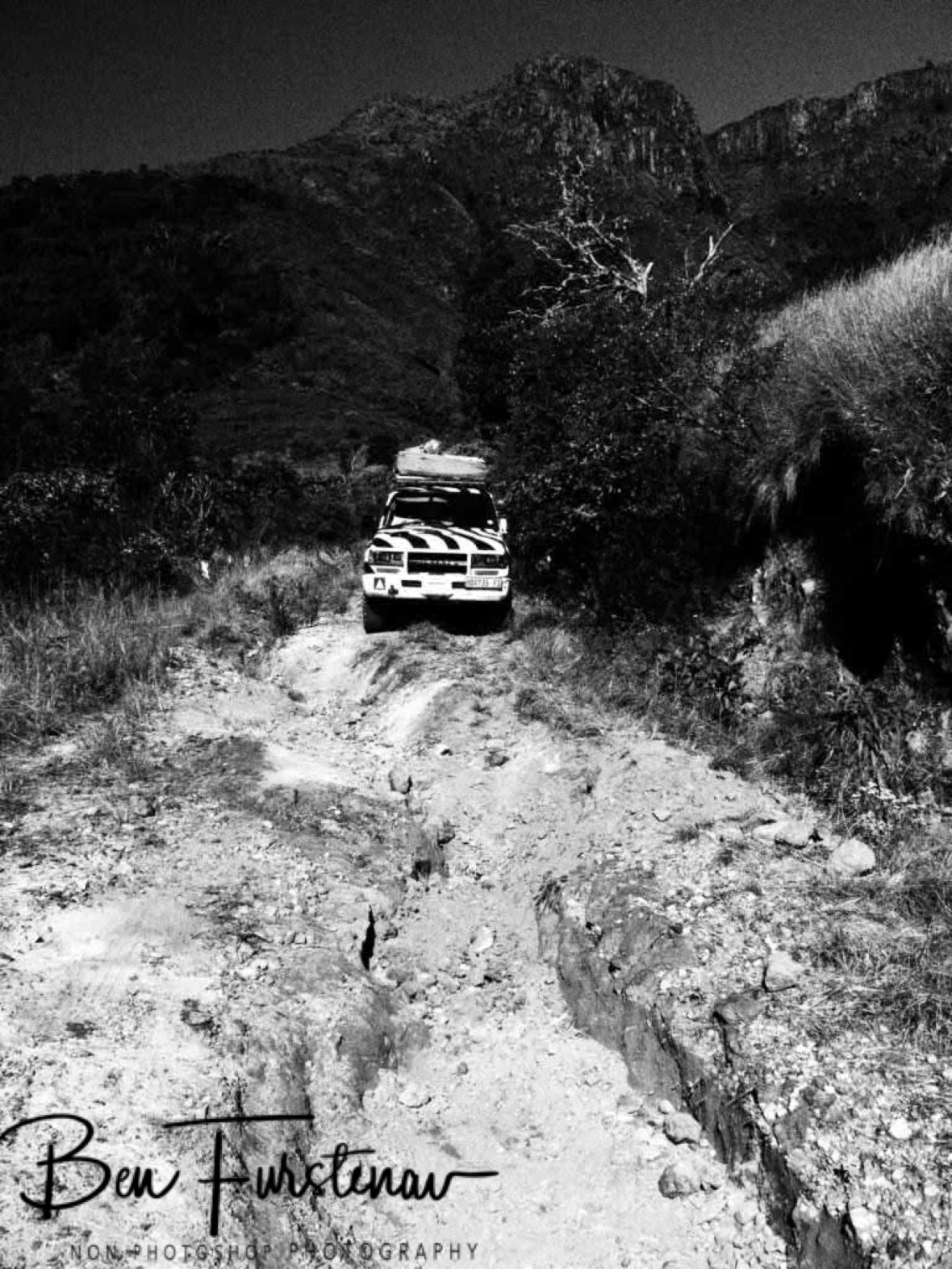 Steeper sections of the track were intensely washed out from rain waters, leaving deep holes and boulders exposed. They made this journey challenging for both of us, but nevertheless, we passed without issues. Zimba loves to explore and enjoys challenges, passing through different lush vegetations the higher we climbed.

We met another Toyota Bakkie, which was clearly struggling, as he said. He and his wife have a farm in Tete and are looking to relocate up these mountains. This was the reason he came up here and the reason my friendly ‘chief’ needed a lift. 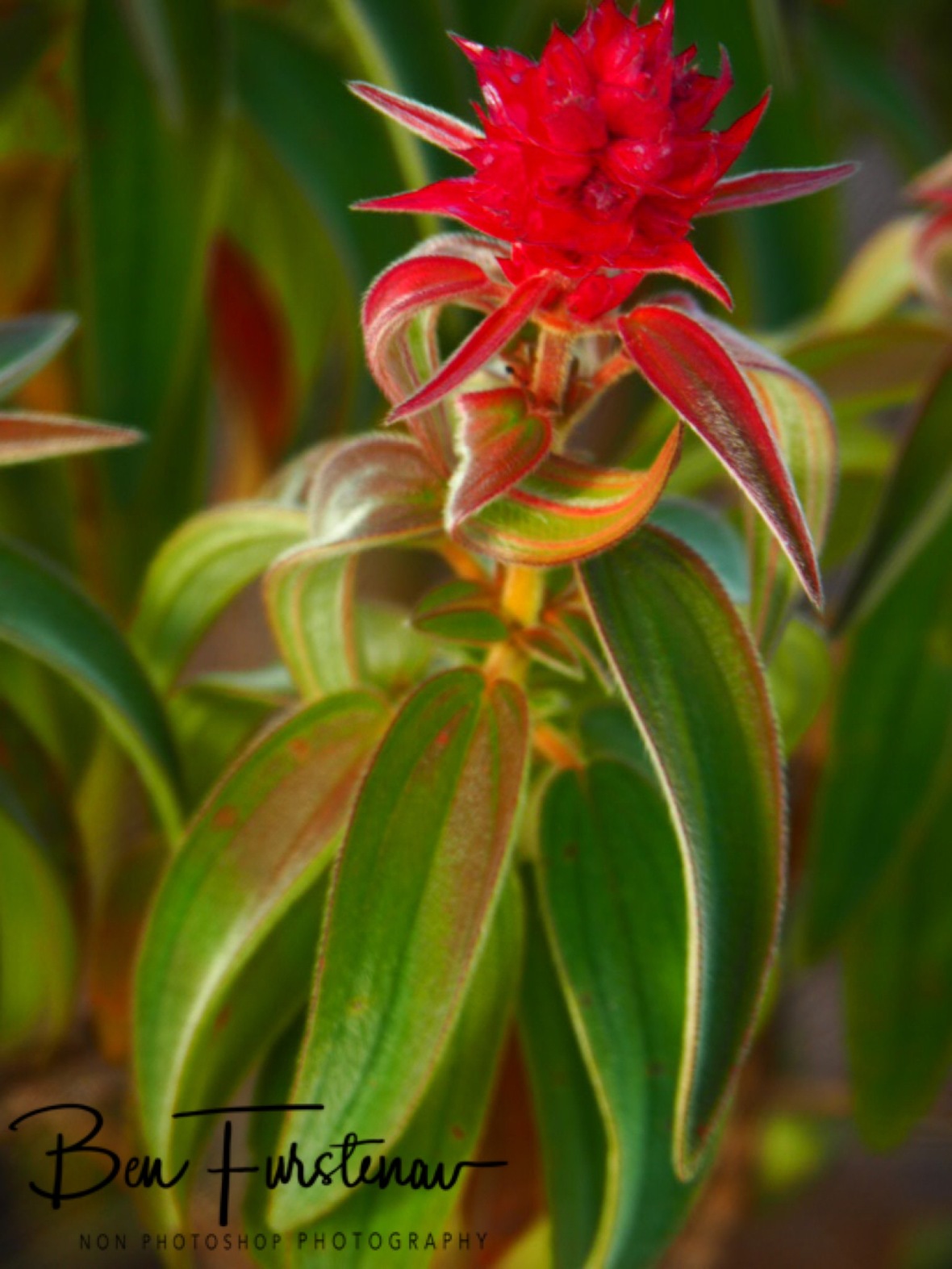 Eventually, we arrived in alpine meadows, the ‘Tsetserra Plateau’, well over 2000 meters up.

Breathtaking in many ways, from Mount Tsetserra, Chimanimani Mountains, Mozambique

The air was thin, but the view was breathtaking.

I found a nice even camping area next to some ruins and set up camp. Making a fire was one of the first things to do, as the sun almost disappeared behind the mountains. Cooler air was replacing warm sun rays. With no wind, it was eerie quiet. I heard some baboons in the very distance, one could hear a needle drop.

Amazing clear starry nights made up for a cool night. I haven’t seen the Milky Way lined up with the ‘Southern Cross’ for a long time. Millions of stars covered dark skies. Wow. By 7 pm, temperatures dropped to 4 deg C. The fire kept me warm and entertained. 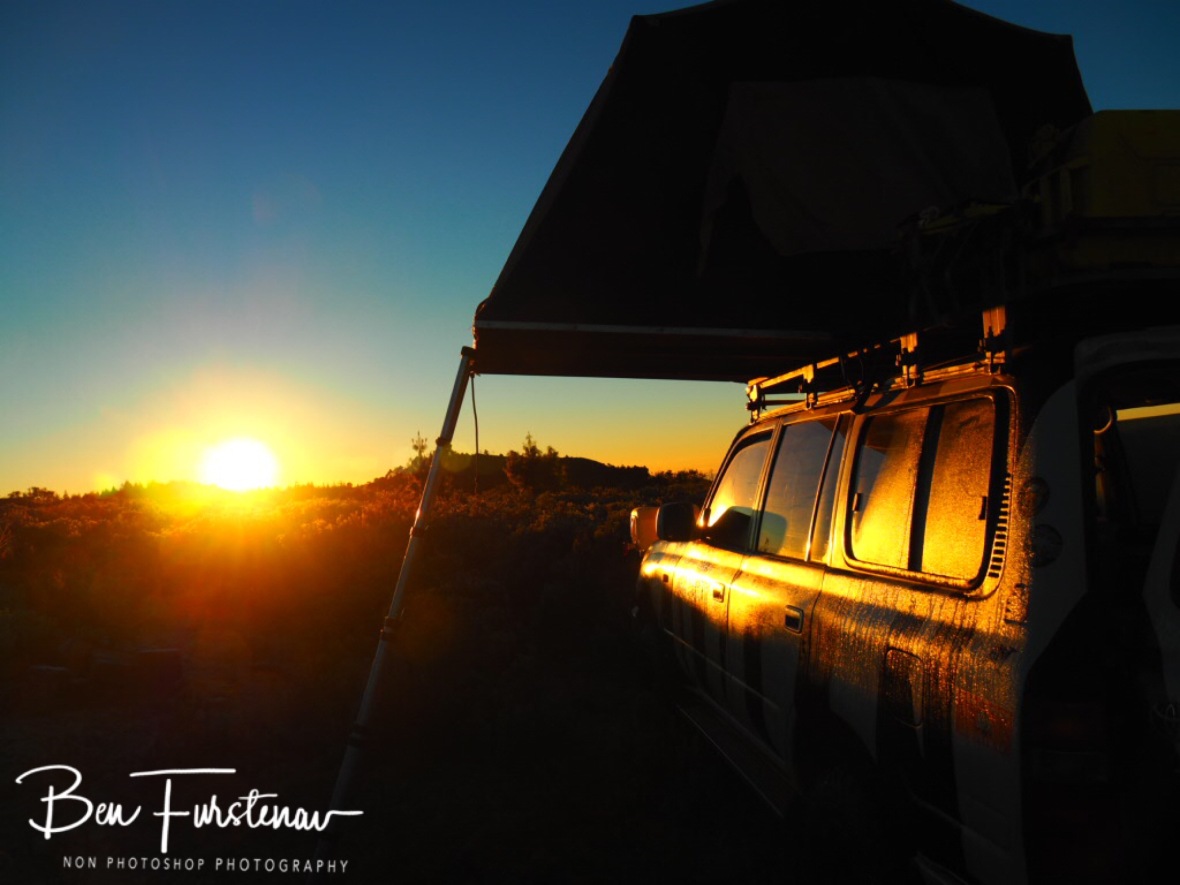 It was still calm as the sun came up over the mountains, but clouds moved in shortly after. 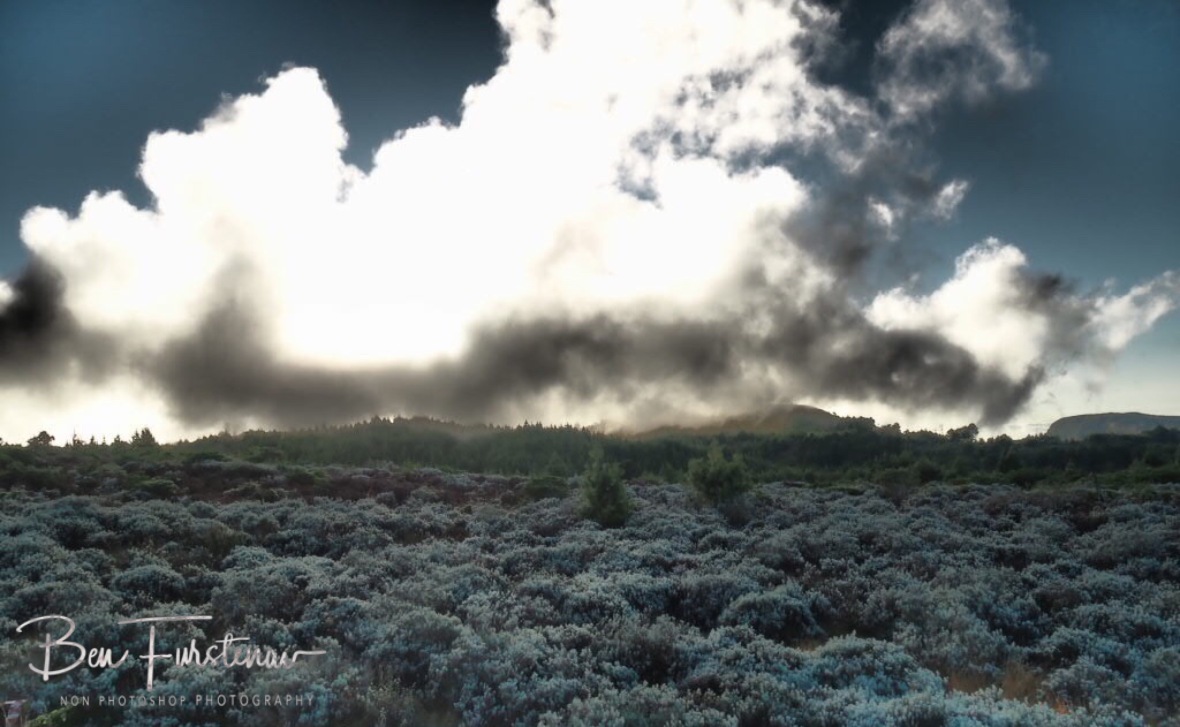 The clouds rising up and bumping of the plateau edge looked rather amazing. 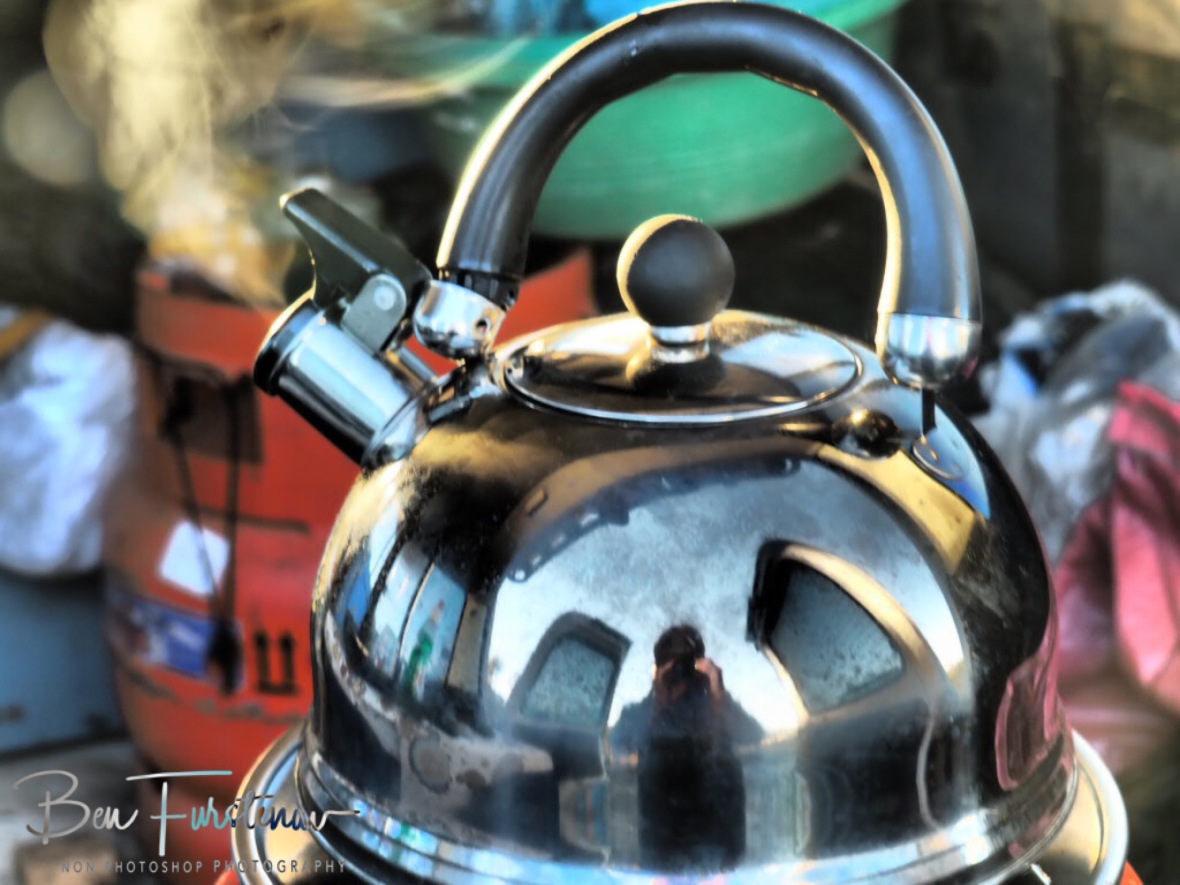 A hot cuppa coffee was needed.

I opted for a walk around the plateau. The ecological diversity is impressive. The alpine grass gave way to lush, almost tropical mossy forests. 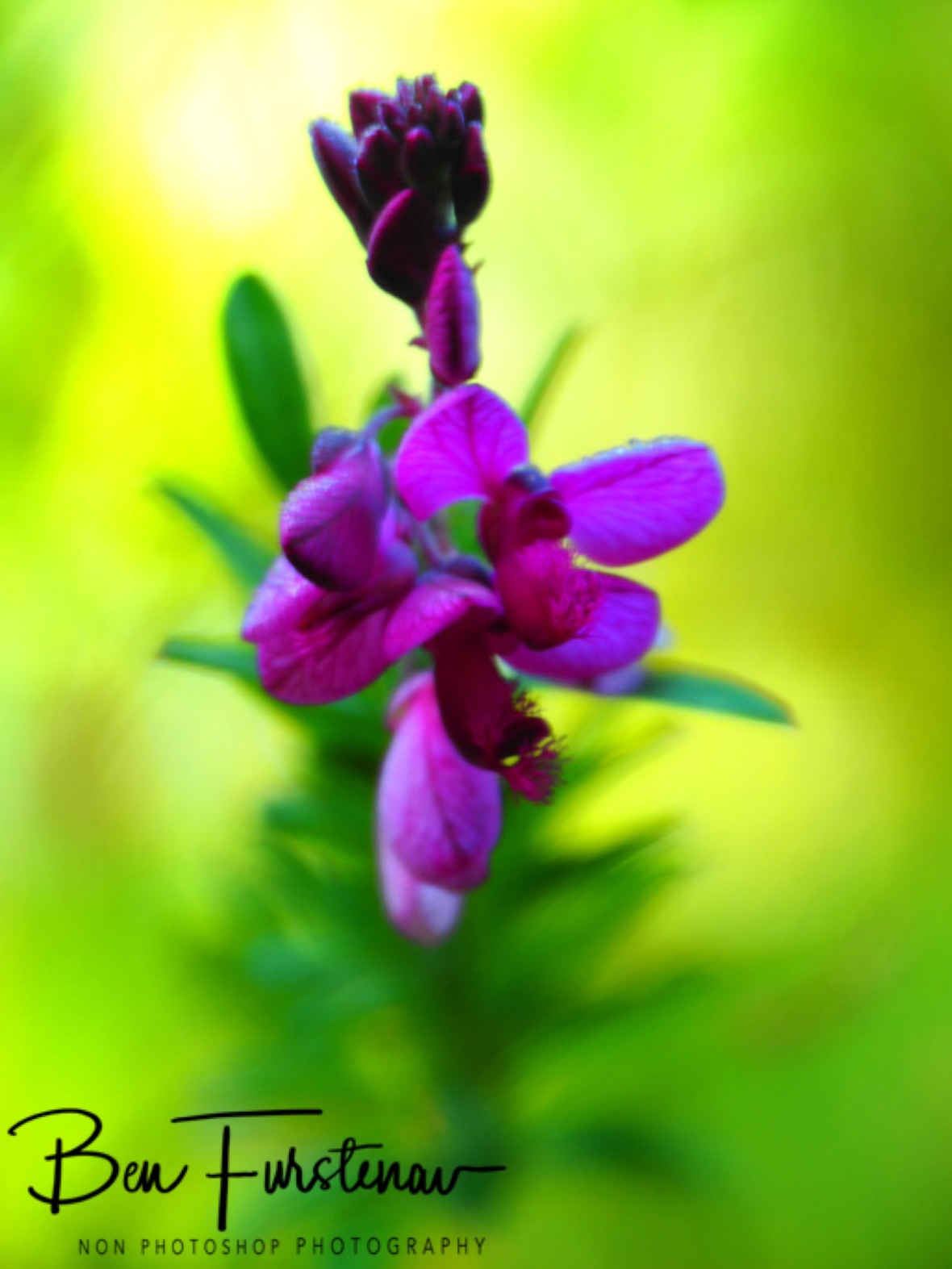 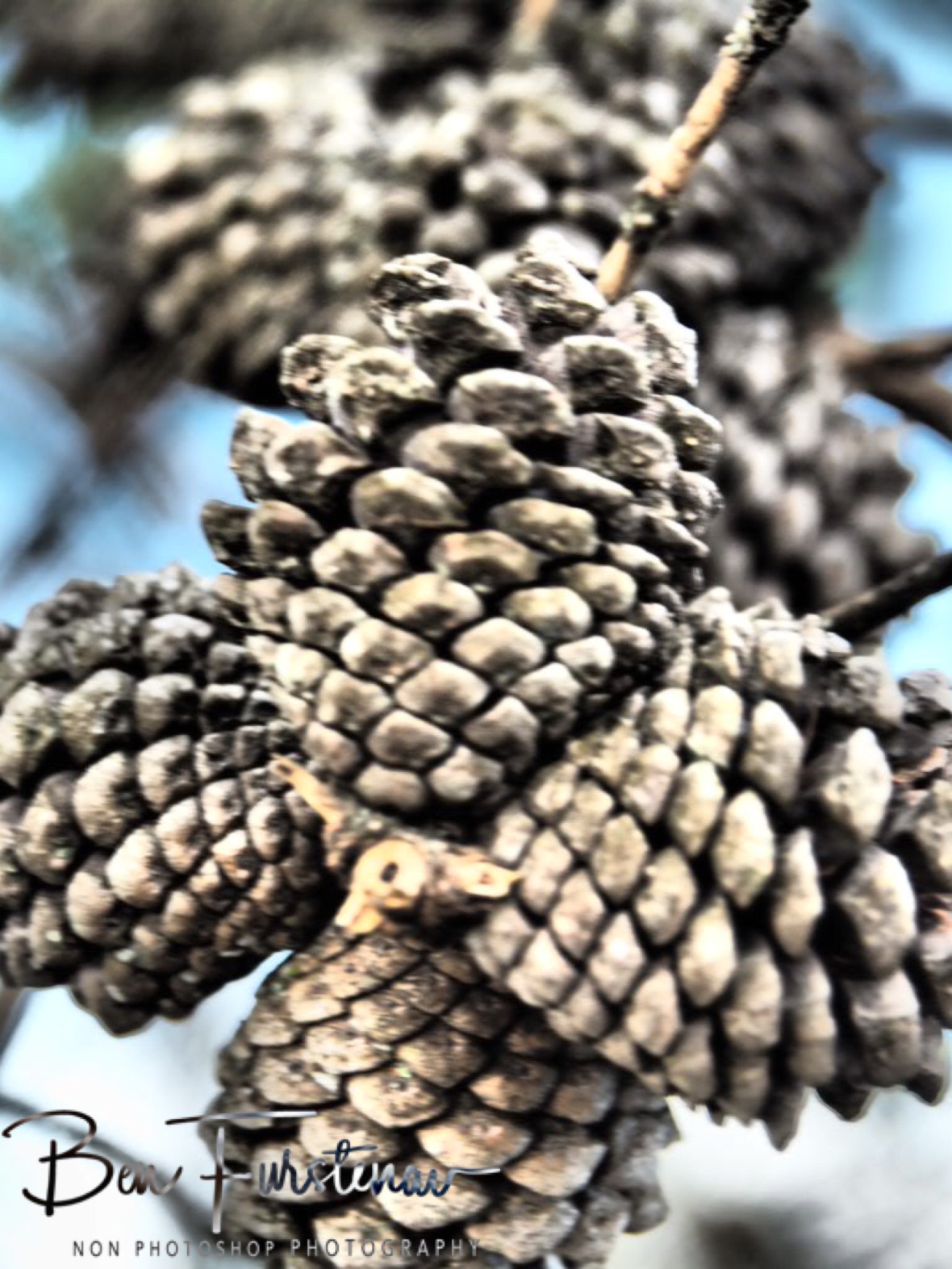 A few creeks with freezing cold, clear waters gently flowing down the meadows. Climbing up a steep hill, I was able to see surroundings better. Unfortunately, clouds covered the view. 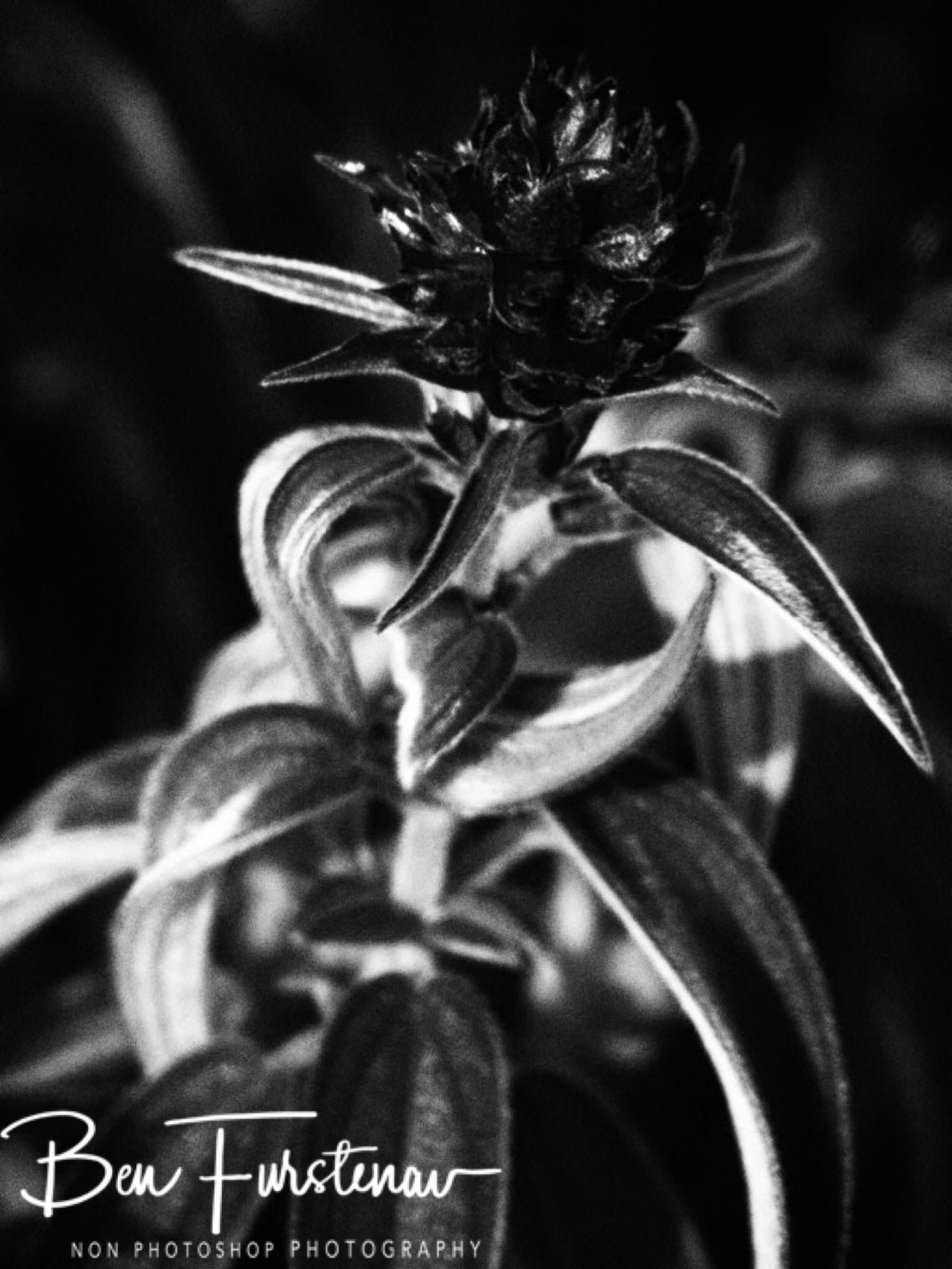 Another day, another opinion, typical for Africa. I had just finished lunch, as a delegation of 5 Black men and one white woman arrived. One black man was impressively dressed in Mozambique army clothes introduced himself as the ‘chief’ of the area. Another one?

After back and forth, they demanded me to pack in, drive down the mountain to the first village, to introduce myself, and saying that I am camping up here. Then I could drive back up to go camping again? I was somewhat stunned, as the ‘chief’ yesterday had given me permission to camp up here. Besides, I did try to get info about staying here in Chimoio, but no one was able to help.

After gentle persuasion and translation, I was allowed to stay on. By the time I had packed up, drive down and up again, I would have run out of daylight.

I started the fire early again, as gusty winds chilled me to the bones. 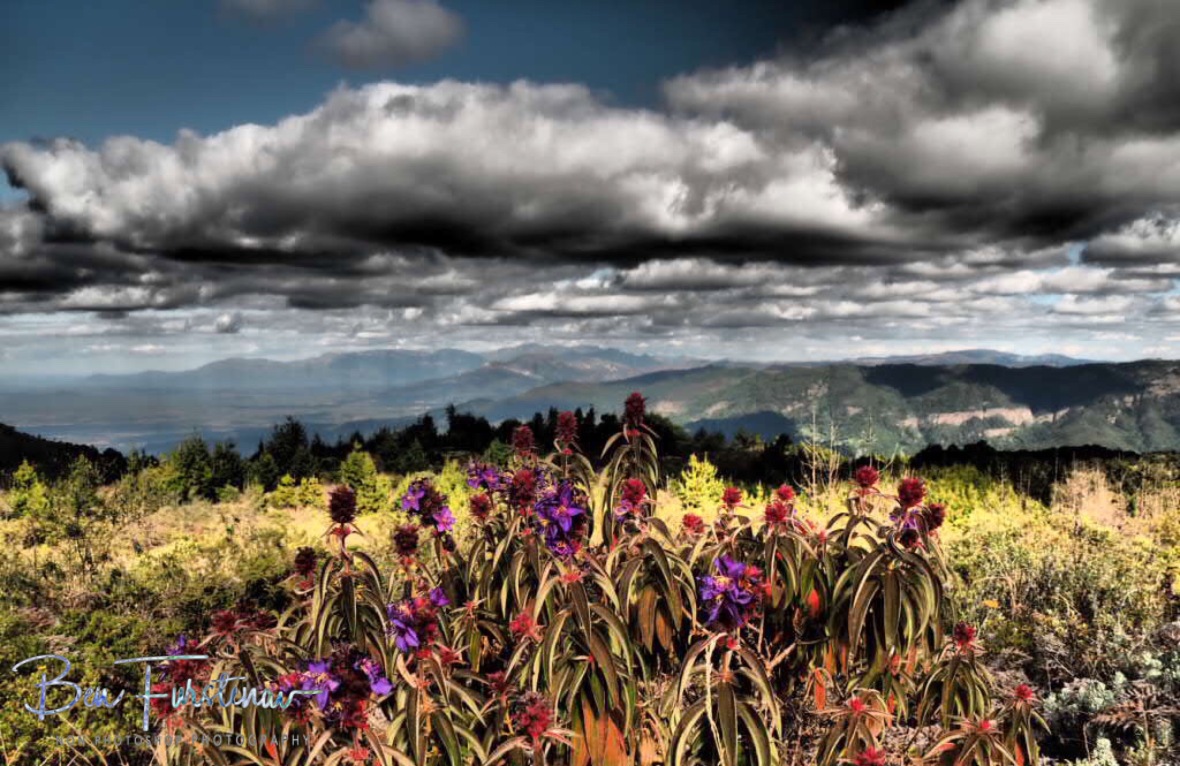 Low clouds covered the plateau, no stars out tonight. 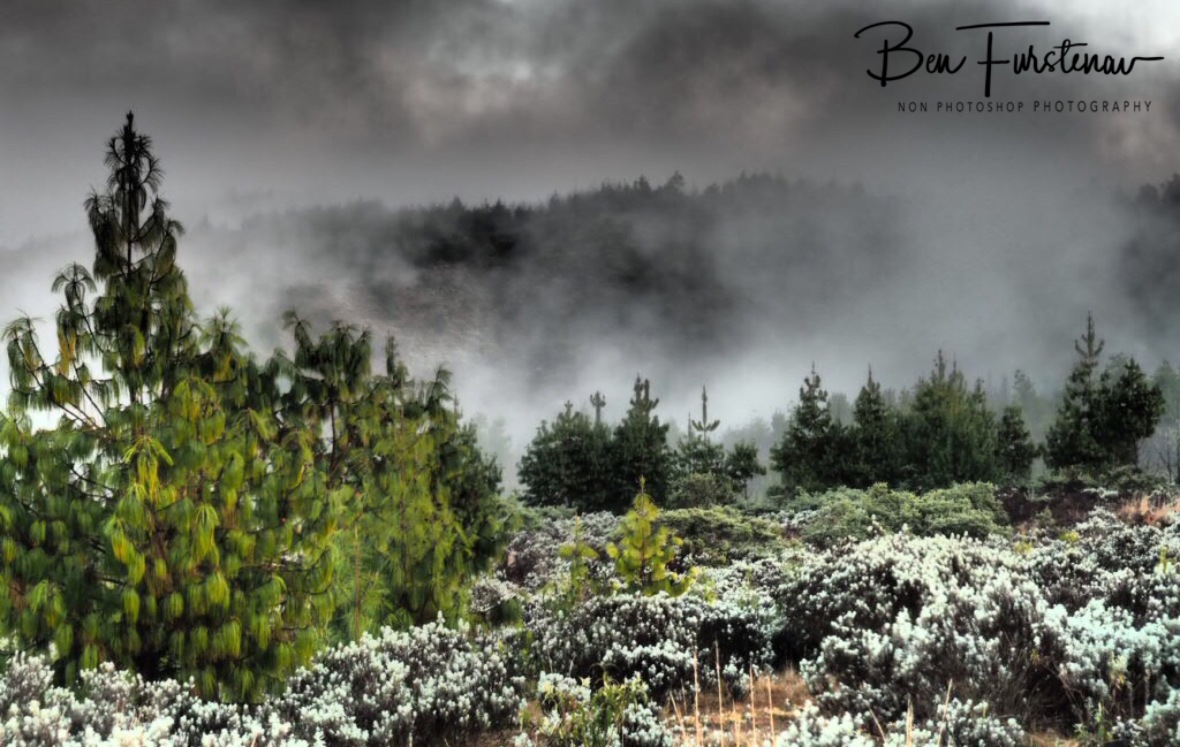 It wasn’t as cold next morning, as mist covered the alpine meadows. The warm sun rays were welcoming, as they steamed off the clouds for another sunny day to be exposed. 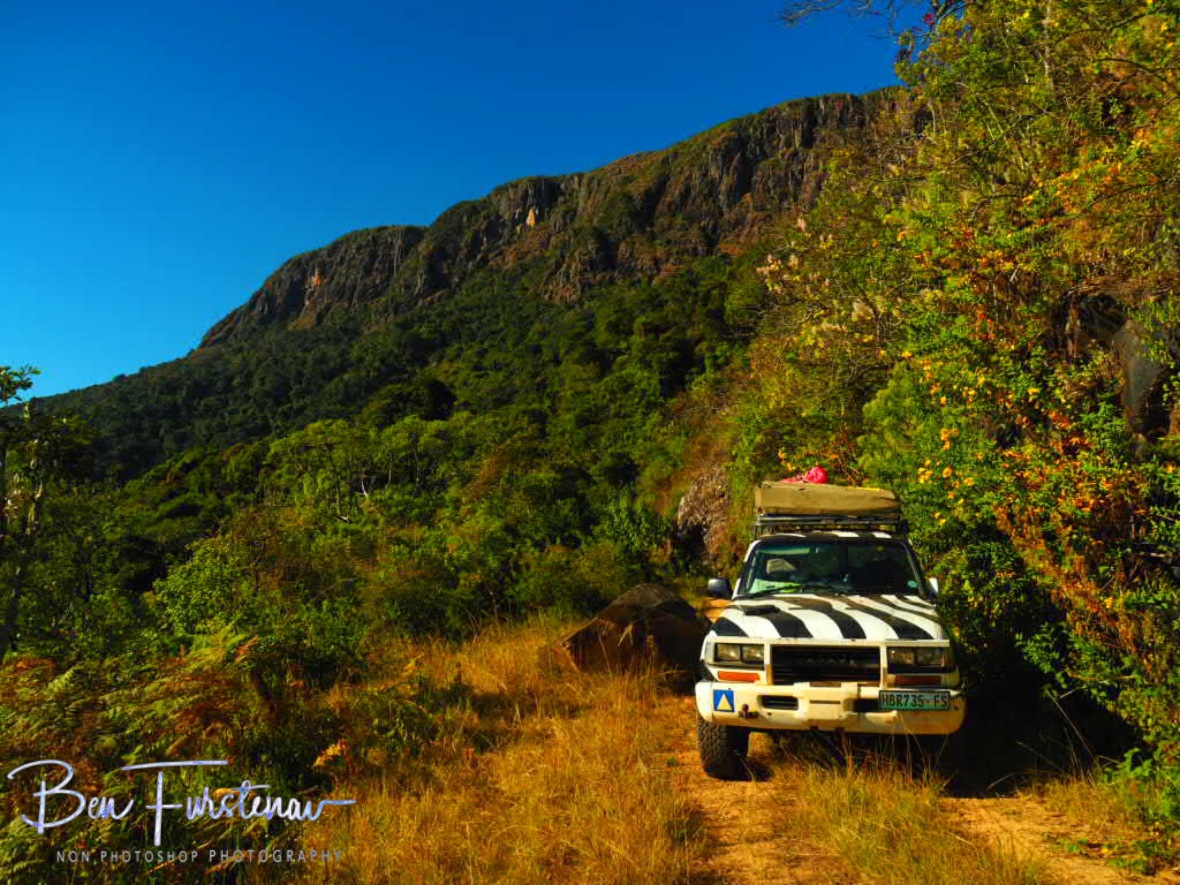 Driving down the dirt track was just as impressive, with stunning views over valleys near and far. 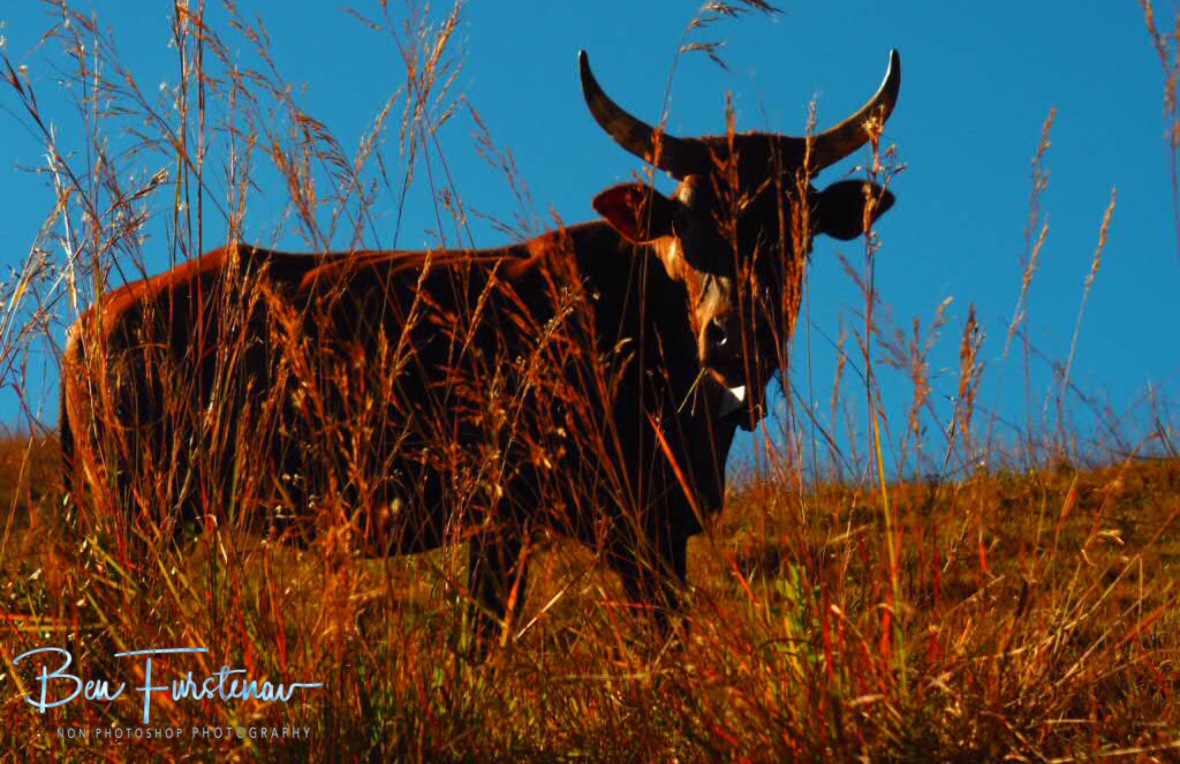 Cows with bells roamed grassy alpine meadows. One could think to be in the Alps. This one looked like the ‘Milka’ cow.?

View over the mountains over to lake Chicamba, Mount Tsetserra, Chimanimani Mountains, Mozambique

‘Lake Chicamba’ was visible in the very distance. A few workers maintained the track, which just as tricky to pass at times.

Looking from Lake Chicamba back to the Chimanimani Mountains, Mozambique

I felt refreshed for the new adventures to come.