Overnight fog gave way to another beautiful sunrise, coming up over a calm river, which appeared steaming away. A fantastic opportunity for some great shots.

The crew was already among their morning routine and called me over for breakfast on my colourful blanket. French toast served with fresh coffee, in early morning, misty sunshine… wow.
We floated of on our merry way again  and saw quite a few crocodiles basking in the sun.

Wherever locals can, they plant rice on the riverbanks. Rice is the staple diet, served with a bit of meat or fish, with lots of sauce to pour over the rice. About a kilo of rice per day,per person. Breakfast,l unch and dinner. That is a lot of rice.
The river was quite narrow in places and gorges emerged, full of nesting birds.
The smell of roasting coffee behind me was just irresistible. It still needed to be ground.

That happened at our next stop in another small village. I gave it a go, holding that long piece of hard wood is not easy. I was too slow I think and Ninah took over again, carefully sifting the coffee in to a plastic jar. Time for a swim then, which was well welcomed by the village kids. And there are a lot of them! About 50% of Malagasy are under the age of 16 years of age!!!
After I dived in to the refreshing water, a bunch of them followed and showed me how one is supposed to dive in to the water… a backflip of course… with lots of laughter. Pretty cool. 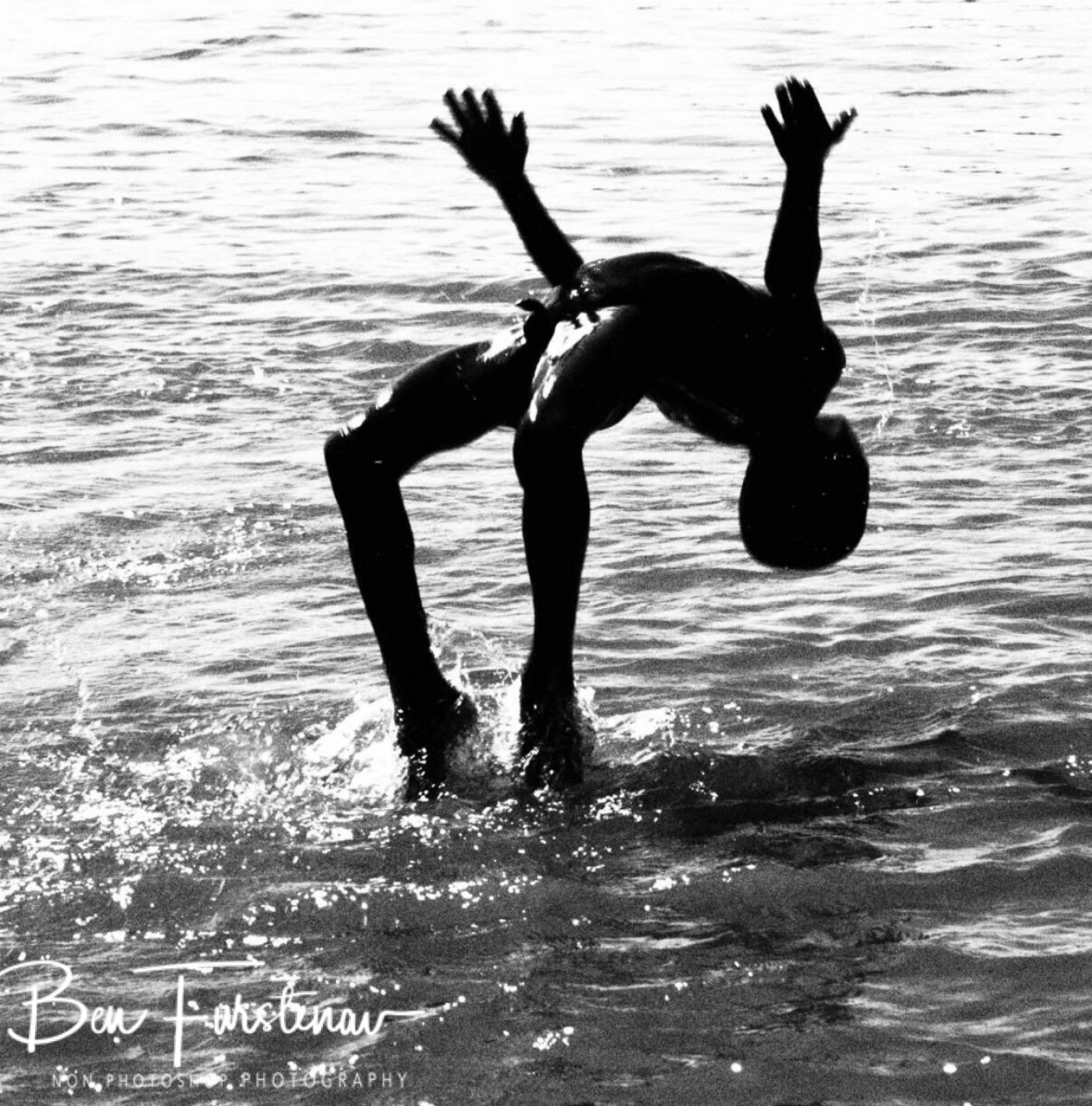 We met up with a few more pirogues, haggling for sweet potato and some more prawns…
I told her after dinner last night, how delicious they were… and guess what…? they are on the menu Again. Yumm..

We lost a bit of time along the way, as the sun had already disappeared and we just made it in time to our next designated camp spot. No one else around, as other pirogues and boats only do a three day trip, we have one more. Unfortunately, there is no firewood to be gathered, literally all gone… Ninah and Lida were cooking up a storm, thankfully able with my two Luci’s and head torch, who have been very useful on this trip. The only light they have is a wee battery charged lamp. I am actually wondering how that worked out, if I hadn’t brought my lights…but where’s a will, there’s a way, I guess…

Lada was picking out seeds out of the local barrak and rolled up tonight’s entertainment… Gilet meanwhile, was very interest in my tablet, as I was transferring today’s photos over for tonight’s picture show. They are all very impressed by the shots I took and even point out, or ask if I wanna take a photo.
The smell of Ninahs dish was just incredible again and after another vegetable soup, main course followed… the prawns were peeled before cooking and shrunk considerably, in yet another tasty spicy sauce, yet so different from yesterday…

As it was our last night on this amazing cruise, we finished of the beer and Malagasy Ruhm,spiced with oranges, vanilla and other spices,  added to Barrak hateri and another night full of laughter and joy. Gilet and Lada are proud Malagasy young men, trying to communicate with me. I think the moral of their story was, that they were happy with me and accepted me as part of their family. How amazing is that…?

The next morning the fog was really thick so that even my tent was soaked with dew… it took a while longer to dry in the upcoming sun. But what a scene… the river looked steaming, like a hot bath.. 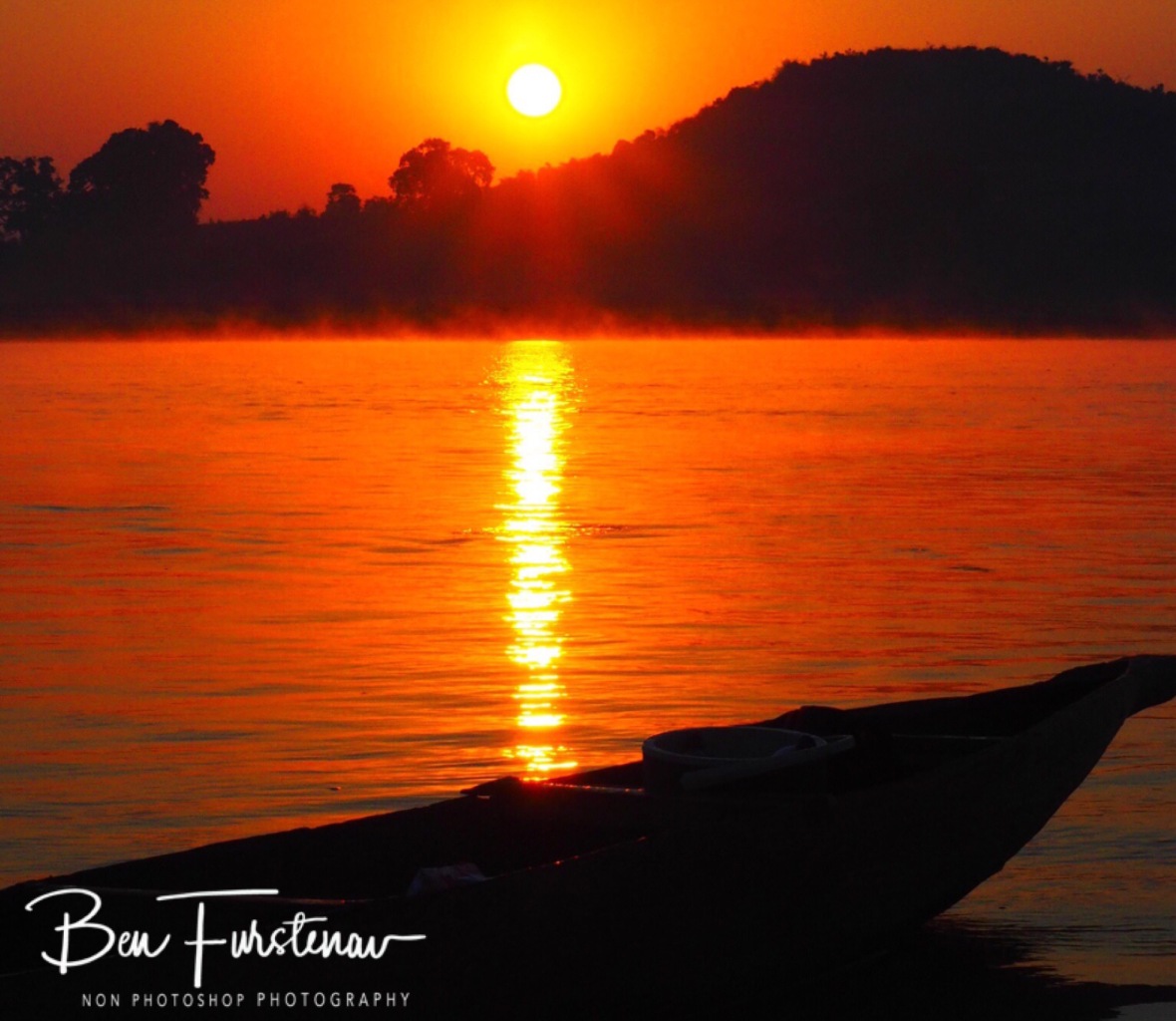 A few locals came by to say hello, while we were packing up for the last time, after another amazing breakfast of course. Even though these are the last few hours of our trip the spirits were high and amusing. What a great journey, what an experience, all together.. everything just fitted in perfectly. It really is hard to describe… even for me, who had done a few amazing journeys in life…

Traffic got increasingly busy, with boats returning to Miandrivazo and Kat Kat’s (4WD’s) loaded with tourists coming to the river crossing at Belo sur Tsiribina. There was a long queue of 4WD’s waiting to take the homemade ferries, carrying 3 cars at the time. We arrived at the shores of Belo, which was a busy busy place, comparing to the last 4 days… the usual hustle and bustle of a typical market town, topped up with lots and lots of tourists, heading to Tsingy Nat. Park. I was happy to get to the hotel, out of the dust,and a fresh shower.. washing clothing, recharging batteries, and memorizing an amazing trip…

We had dinner together, although I had to eat first(???) and washed the dust down with quite a few beer… some more barrak afterwords and another memorable night between the 5 of us… I played my Pink Floyd videos on my table taken on Mauritius, which absolutely fascinated Gilet … Lada was very happy and repeated himself about how proud he is to be Malagasy and that I was part of this unforgettable trip. I was very much touched to be welcomed this well in our little community. None of us felt too well next morning.
The boys got ready to paddle back, 10 hours it takes them they say. I find that a little hard to believe. Ninah,lida and I got ready for our next adventure, Tsingy, Kirindi and Alley de Boabab.