After an eventful day like yesterday, I was wondering what today has in store…
I urged Ninah and Odilon to join me for breakfast with Paula, Emma, Raoul and Lisenne. The staple Malagasy breakfast contains rice,rice, and more rice. But for a change, how about some (stale) bread with jam.

I have told the train crew all about Ninah and Odilon and this was the perfect opportunity to meet. Ninah and Odilon got a bit shy and felt overwhelmed, but settled in quickly in a happy and friendly atmosphere. I had already been booked for a pirogue trip on the canal, with lunch on the beach. Why don’t we all go together? The others hadn’t planned anything for the day and would have ended up on a pirogue trip anyways.
Ninah was in her element, on the phone, organising this trip. It also showed the others what magic she can pull out of here hat. And that it was. Paula, our Spanish doctor, was concerned. Not about the pirogue cruise, but about my feet, which had swollen a fair bit. Looking at all open bruises, she recommended antibiotics, cream and plasters to cover. A trip to the pharmacy was a must.

Anyhow, we all crammed in to our Kat Kat,and drove to the other side of town, to the pirogue launching area, next to a cosy looking restaurant and bar. We met our guide, and 4 piroguist. I sat up front, where I had more space with my OM-D, hoping to catch the atmosphere within and around us.

We cruised to the canal river mouth on the beach, where local fishermen and women sold fresh caught fish. Other vendors selling art and craft, kids playing in the sand.

But two local fishermen caught my eye, as they were standing on a brickwall, protecting the Bay Area from a large swell. They knew were those large waves hit the wall, but still looked quite impressive.

A few fishermen returned from fishing around the breakwall. Tricky business, I know from experience in my kayak. 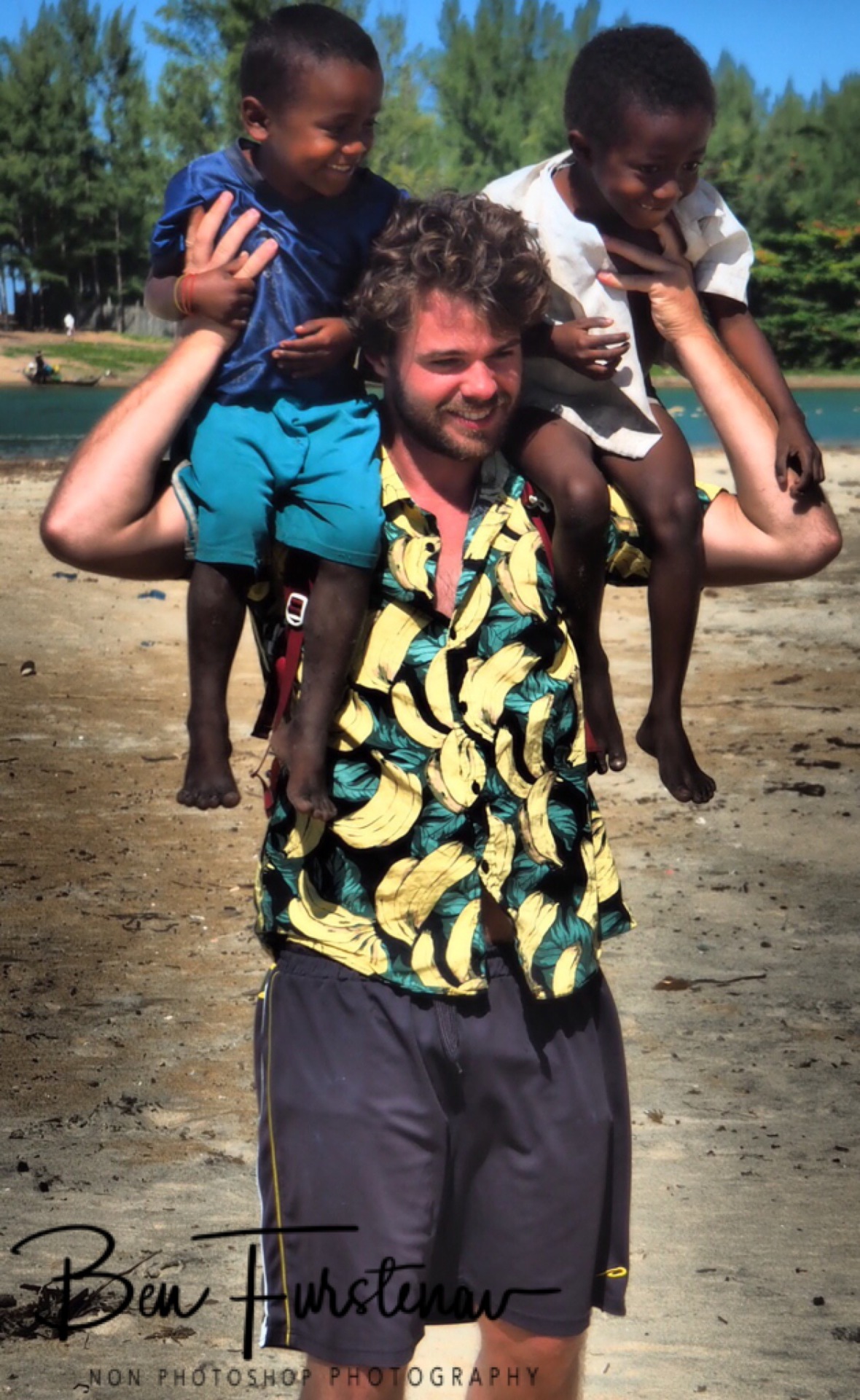 who were happy to show of their cart wheel and dance skills. Similar to yesterdays event, just different location, different transport.

What it comes down to is the fact that without the train, we wouldn’t be here and this train only arrives in Manakara 3 times a week. It shows in desperation for people to beg for money. There were lots of them in front of the hotel, really heartbreaking. We couldn’t give them any money as that would have caused a stampede. A weird vicious circle. Things that money does.

We cruised upstream, Ninah had pulled out a jar of of clay, and started painting the girls faces in traditional Malagasy art, before doing her own. 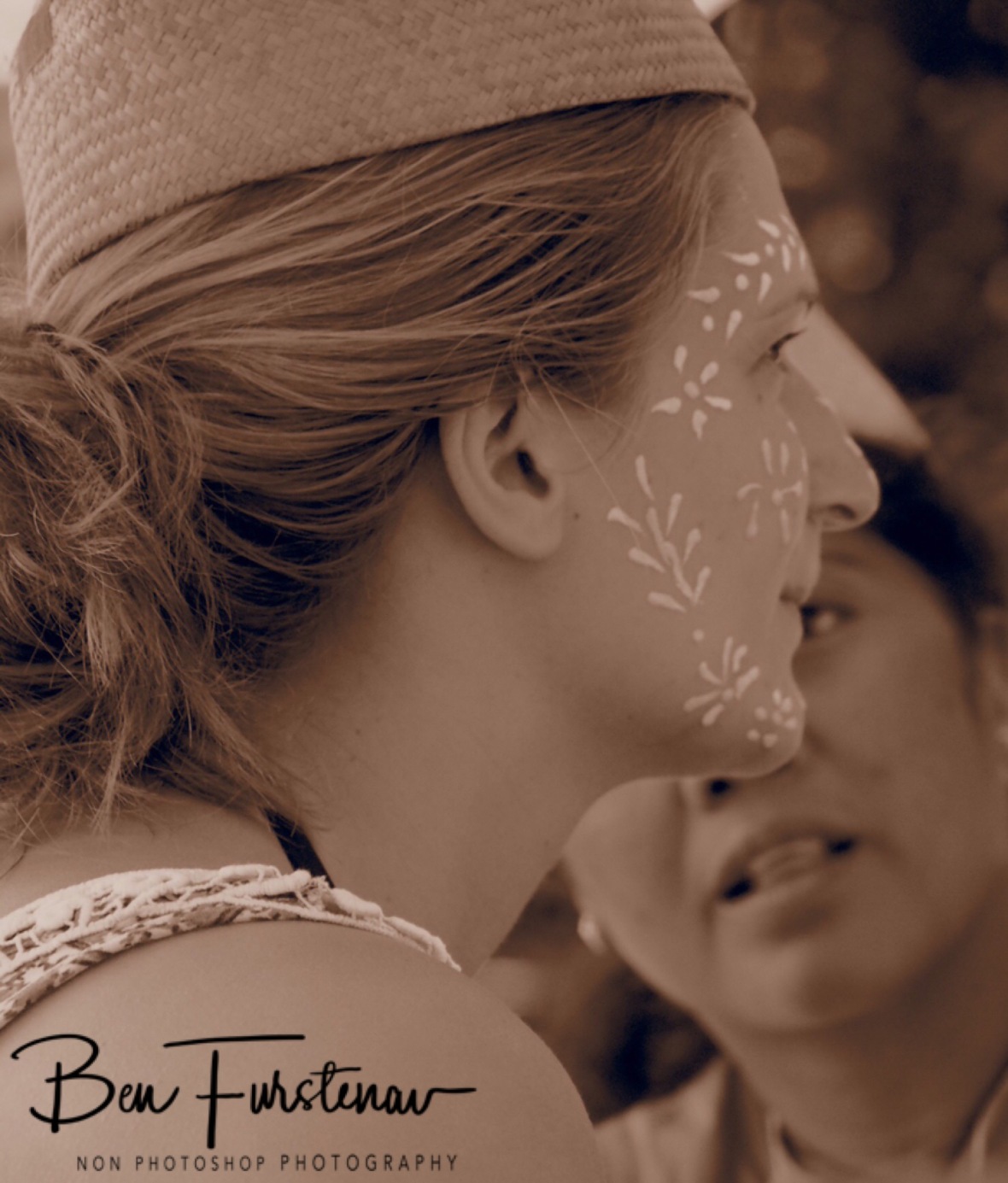 It was great to see so many happy faces, chatting bonding or just enjoying this glorious sunny day.

It was raining the past few days and cleared up in time, just for us.

Fishermen were washing salt out of their nets in the brackish water, others getting to their destination,small communities lined the shores.

We arrived at a wee fishing village,and were immediately surrounded by local art vendors. All handmade, in stunning style. Straw like fibre handbags, filled with spices from the area, sarongs and most impressively, wood carvings, for an unbelievable price. I could have bought the whole lot but have no space in my backpack. Australian customs would have confiscated the lot, arriving on Australian shores.

I couldn’t resist to buy a wooden pirogue, made out of dark hard wood. In the middle of the pirogue, two tub like containers, as a salt and pepper holder with lids and two tiny spoons for the content. It literally looked like two Chinamen paddling on a pirogue.

We got to the beach where our piroguists were cooking already over a couple of fires. The smell of grilled fish and lobster lingered in the air, yummmm.

We had a quick photo shoot on the beach, the girls and their painted faces, before they dived in to the oncoming waves. Dr. Paula gave me the no no, due to my infected feet. I better listen to the doctors advice, particularly if you don’t have to pay for it.

Lunch was served,and it looked and smelled mouth watering. A perfect sized Spanish mackerel ( Paula and Emma, both Spanish, didn’t believe me that the fish was called that), half a dozen lobster placed on banana leaves, veggies, French fries and rice, carefully and well presented. Simply amazing.

We hoped the piroguists would join us, but that was against protocol, again. It’s hard to describe such amazing food, at such amazing place, with such amazing company. And most of us only met over 24 hours earlier. Ninah had a big grin on her face, I just smiled in accomplishment. Job well done, again.

A colourful quartet arrived, sang and danced in traditional style but it looked a bit fake. The kids however, dancing to the guitarist’s words were fantastic though.

We heard drums on our way back to the village, like band drums, and a guitar. We followed the sound, which lead us behind a house. Two kids were jamming with guitar,and a hand made drum kit, using plastic barrels and metal tins and lids. How cool was that. Got to use what you have. Just wow. 10 out of 10.

Fishing is clearly the main income and food source. When fishermen aren’t out fishing, they spend time repairing their nets. Quite a skill, and time consuming. 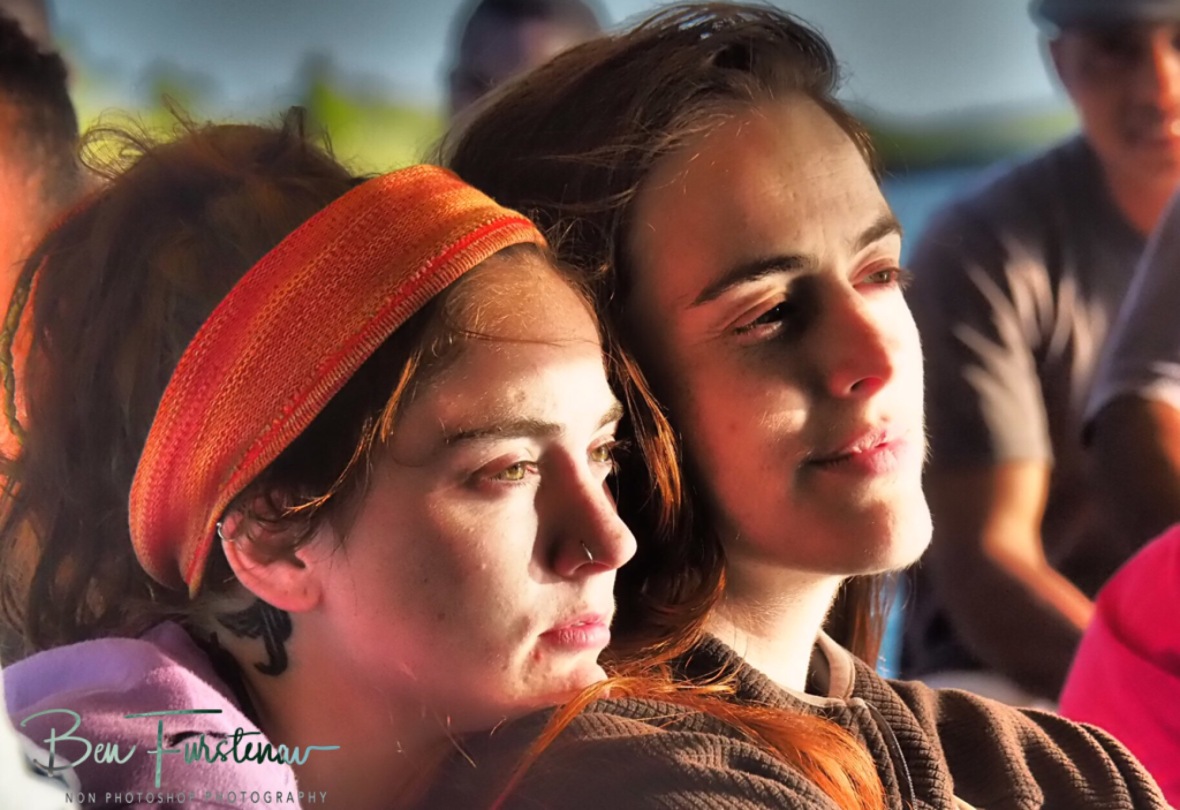 On our way back,We stopped at the local tree oil factory. The leaves were pressed in traditional ways,using an old, but reliable press. I bought 2 botttes @ 50 ml of local tree oil for 2$ Aus each.

The low setting sun was shining on our faces, Ninah was serving fresh brewed coffee,as the singing piroguists pushed us home. Another fantastic day, no other words can describe it.
We left a very generous tip and hopefully half as good impression on them, as they did on us.
Paula and I missed the sunset, as we hurried to get to the pharmacy before they close. But we returned for a few beers to the bar on the water. Raoul and Lisenne were happy and wanted to book the Tsiribe pirogue cruise, and the Tsingy /Kirindi/Alley de Baobab with Ninah.
I asked them to not overthink it, and only book when they are completely sure that it’s what they want. And it was. Ninah couldn’t stop smiling as she went through the details. I was happy for her and Odilon as it is a competitive business and the tourist season is very short. However that also meant, that our tour of the fantastic 3 is coming to an end. Somewhat happy and somewhat sad. After dinner we were ready to go out for a few beers, but everything was shut, as someone got knifed and killed on the streets of Marakana the night before. We opted to buy a few beers, invite Barrak and watch the photos I took during the day. Plenty of laughter and joy, a perfect ending for a perfect day.