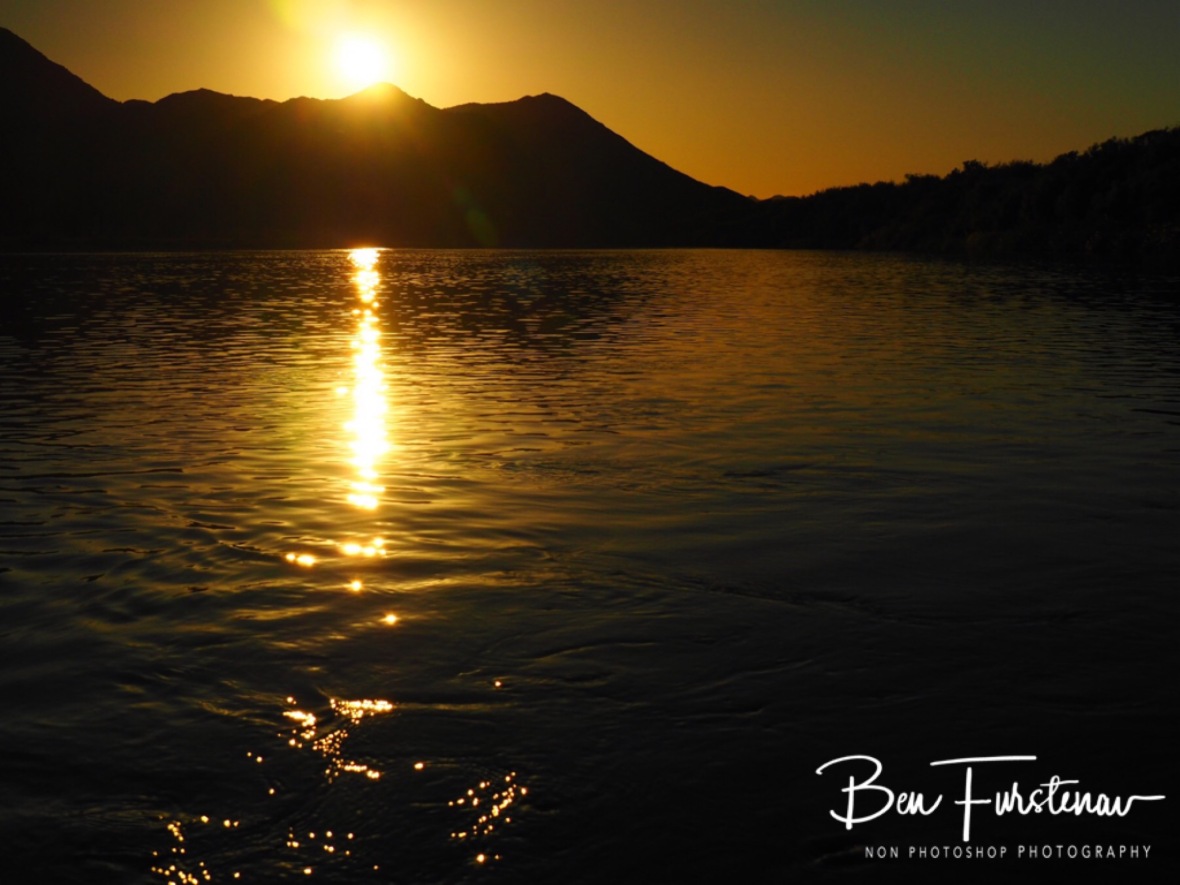 I had a re-day in Springbok; re-fuel, re-fill and relax. It’s not that previous days have been overly exhausting, Zimba did all the hard yakka, but there really wasn’t much else to do here. The four legged Springboks left town ages ago. In spring, this area up to Namaqua National Park, becomes a colourful bonanza and is well known for its wild flower display after rain.  Not today.

I left early enough, following the N7 north towards Namibia. Shortly after the small town of ‘Steinkopf’ (ha ha, what a name), I turned on to a gravel road north east, towards the ‘Oranje River’ and borderline to Namibia.

I was hoping that this gravel road would be in better condition as previous ones I encountered. It was in superb condition. Cruising past road workers, happy and friendly, waving and cheering , Zimba always attracts attention. Passing a few date plantations, I arrived at a fairly full flowing river and had my first glimpse on Namibia. The track led inland again, passing through red sand and granite boulder mountains, near and far.

Descending towards the Oranje River

I took a side track to ‘Ramansdrift camping spot’, passing through more sand and eventually lowering towards the river. I was hopeful to camp next to the river, but that was impossible. Even walking to the river had its risks; the sand was steaming hot, almost melting my crocs. The sand, that got in to my crocs, burnt my feet. The spikes of the Camelthorn trees were immense, almost piercing my feet. 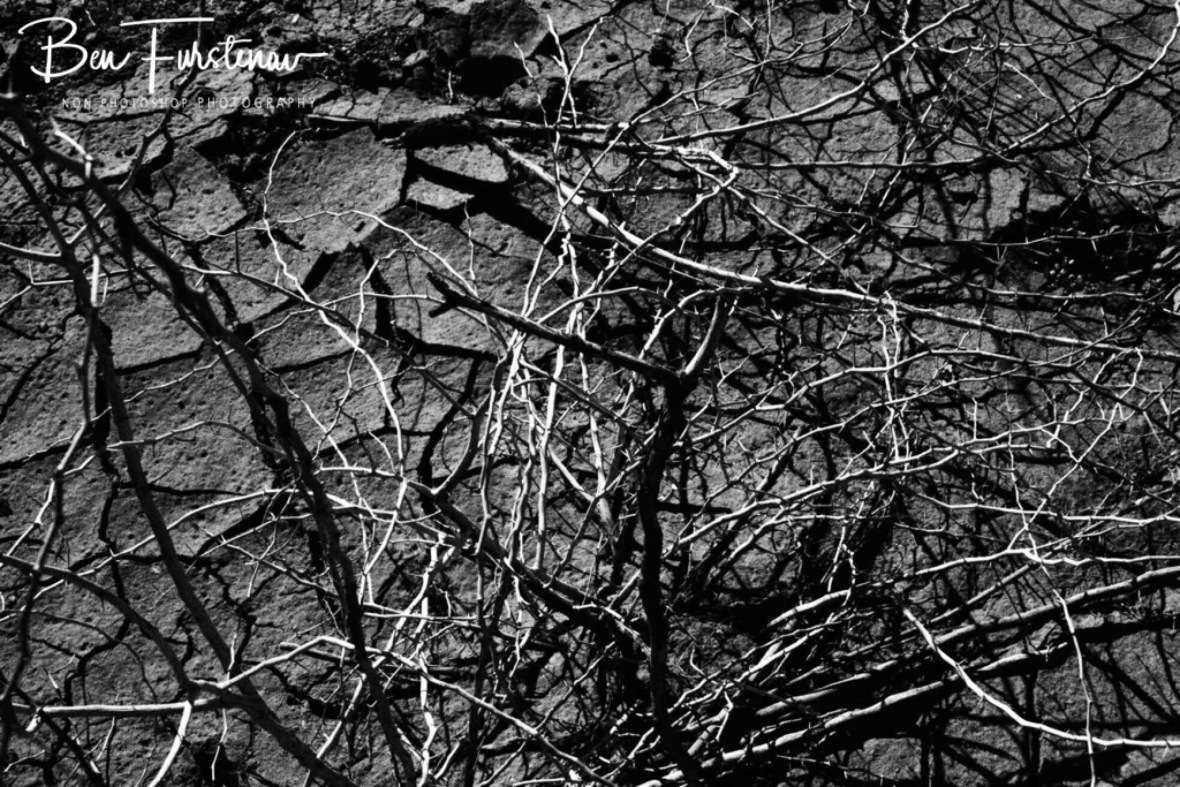 A well deserved cooling dip was worth it. The Namibian riverbank looked much greener, almost like an oasis.

The water felt oh so good and I swam over to the other side. I made it to Namibia after all, not quite the way as planned, possibly not legal, but none the less. I was quickly spotted and greeted by a few cousins, a big herd of baboons. I said that I came in peace, but they still weren’t impressed by my visit.

A few younger males, trying to impress the older generation, nestled in the tree right behind me shouting out rude words, while the females gathered on a different tree and enjoyed the show, going on with their usual de-fleaing.

As the river wasn’t deeper then 150cm’s, I walked against the current, having the whole monkey bunch following me, setting up a monkey drama in motion. It was quite a spectacle to watch. After they followed me a good 50m along, kicking and screaming, I floated back, having them following me again. Ha ha, monkey see, monkey do. No OM-D with me, which would have taken some fun close ups. Baboons have massive canine’s and a vicious temper but they really don’t like water.

I spotted a few colourful kingfisher in the high grass and a pair of bold eagles flying right over me. It seemed that the parent eagle was teaching the offspring a few aerial acrobatics. Wow, what a show. This is the Africa I came to see; untamed and raw, tranquil and free. 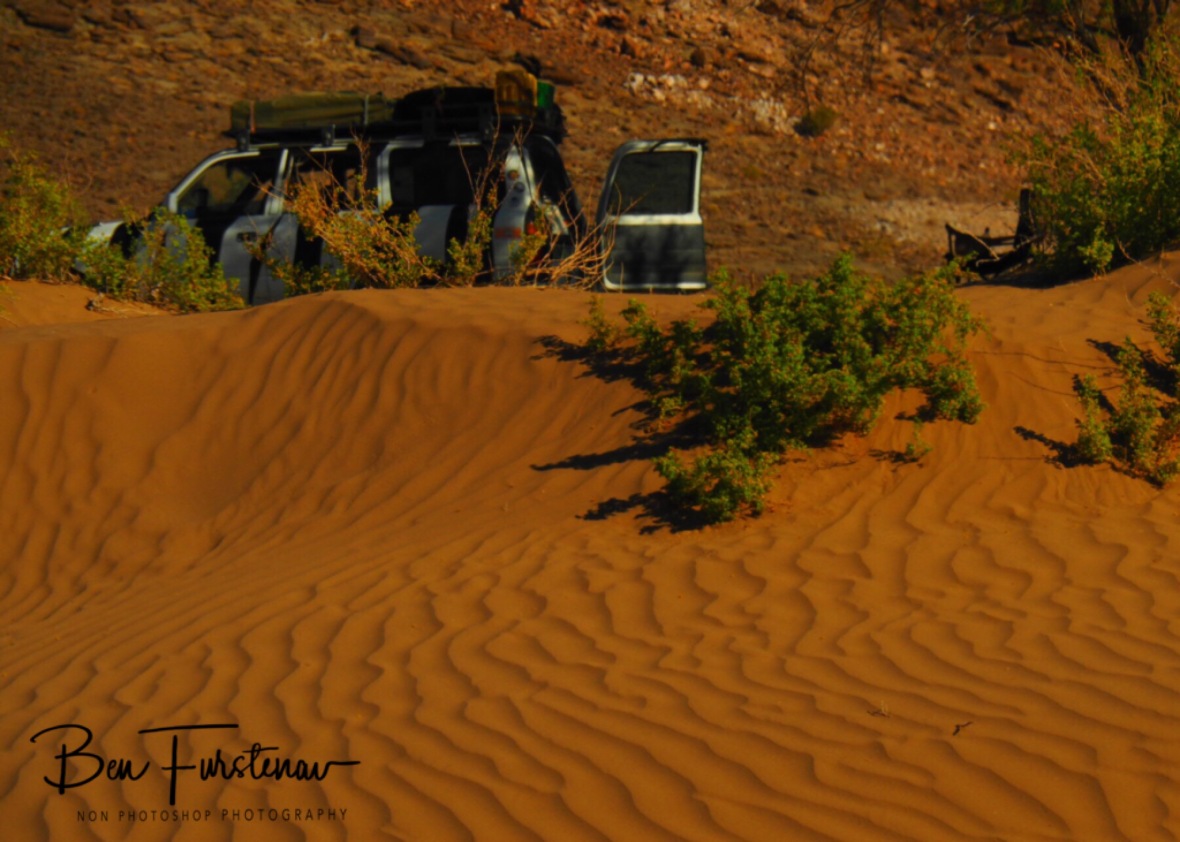 Getting back to Zimba, I was wet again, covered in sweat. Not much shade for him, he was glowing. I tried to relax in the little shade given to me but returned later to the river with my OM-D. I was hoping to re-animate the monkey business and capture it on film. Apart from a few alarm posts, the majority had moved on.

I walked through the river, hoping to get a good shot of a kingfisher, but no chance there either. Good to know, no hippos or crocs inhabit this river. I actually don’t know why. Never ending water supply and plenty of goats to chews from. An open fire wasn’t really needed temperature wise, but how can I not in a location like this.

Early start next morning, the heat will get to you sooner or later……….I preferred later.

The early morning sun gives you a deeper colour on the red sand and blue sky. I spotted a few Quiver trees, an amazing feature in this arid land.

Back on to the main track, sand and more sand. I eventually headed back north, towards the river, following a dried river bed coming from surrounding mountains. Some fun driving in this mix of sand and pebbles. Zimba was moving graciously and I had fun too.

At the dry river mouth stood the ‘Greatmelkboom’, a massive fig tree giving out lots of shade for both of us, a rarity out here. Even though only just half a tree, one side was cracked and burned. My guess is that it was hit by lightning.

Even so, I was happy to find some shade, it was hot already and just passed around 10 am. I was hoping to find a camp spot right on the river for tonight’s camp.

There was one here, a campfire was still smoldering. It was too early and we still had a lot of sand in front of us. After a refreshing swim and chilling in my camp chair, I was immediately covered in sandflies. Fortunately, it is not like the biting or peeing kind like in Australia or New Zealand. These were just annoying. Time to move on, it was just getting hotter by the minute. After a few hours driving in this sweltering heat and I just overcome a tricky rocky section, I passed a little community. Some kids were just coming from the river. One was showing me the track to the river and I drove Zimba until the rocky edge of the river. I was sooo ready for a cooling dip and took my OM-D with me.

I just reached the river edge as I heard the cavalry arriving. News traveled fast, a guy and a cool zebra looking car are by the river. At first a bit hesitant and shy, but quickly in the water, they urged me to follow. What a bunch of happy and cheeky kids, it really was fun.

We spent a good hour in the water, following a photo shoot,with some cool looks. We shared some chips and ice cold water together, before it was time to move on again.

The thermometer in Zimba goes up to 50 deg C max! It reached that long time ago. Some more dirt track and rocky sections, throw in a few bull dust holes and we were covered in dust. Eventually I found a spot by the the river. Not right at the edge, but very close with grassy banks. Another swim and chill by this amazing river.

This is how I spent most of my evenings, watching stars and a few fireflies passing through. Just like yesterday, the wind gotten quite gusty as soon as the sun reaches his lowest point in the sky. It sure was a refreshing breeze.