What a funtastic way to spend a Sunday,  typically in South African family style and hospitality.

We met at ‘Spar’ carpark at 8 am. First arrivals were Jacques son Zayne and his wife Monche-Lee, who brought their one year old son Miles. Jacques and his wife Dolla came along with Frikkie and wife Tanya, arriving in his ‘Rand Lover’ shortly after. A quick grocery shop and we were on our way to ‘Hartbeesvlatke’, somewhere up the mountains behind Sabie. 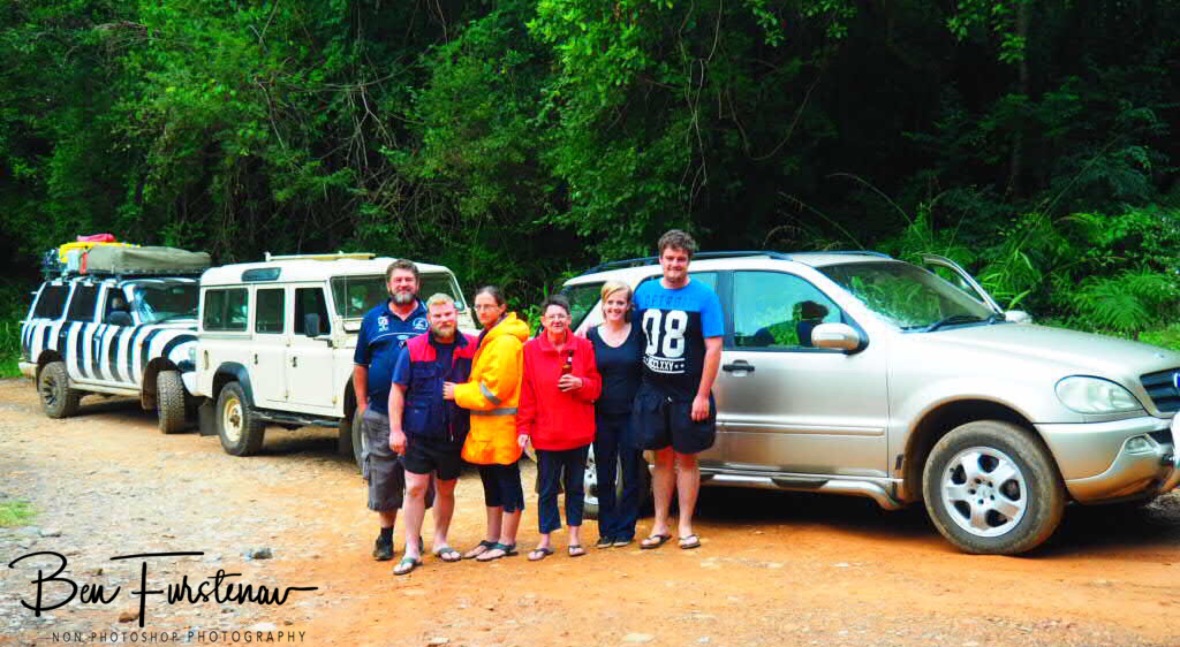 It is tradition to stop at a mountain spring to enjoy some refreshing mountain water and regroup in happy surroundings. 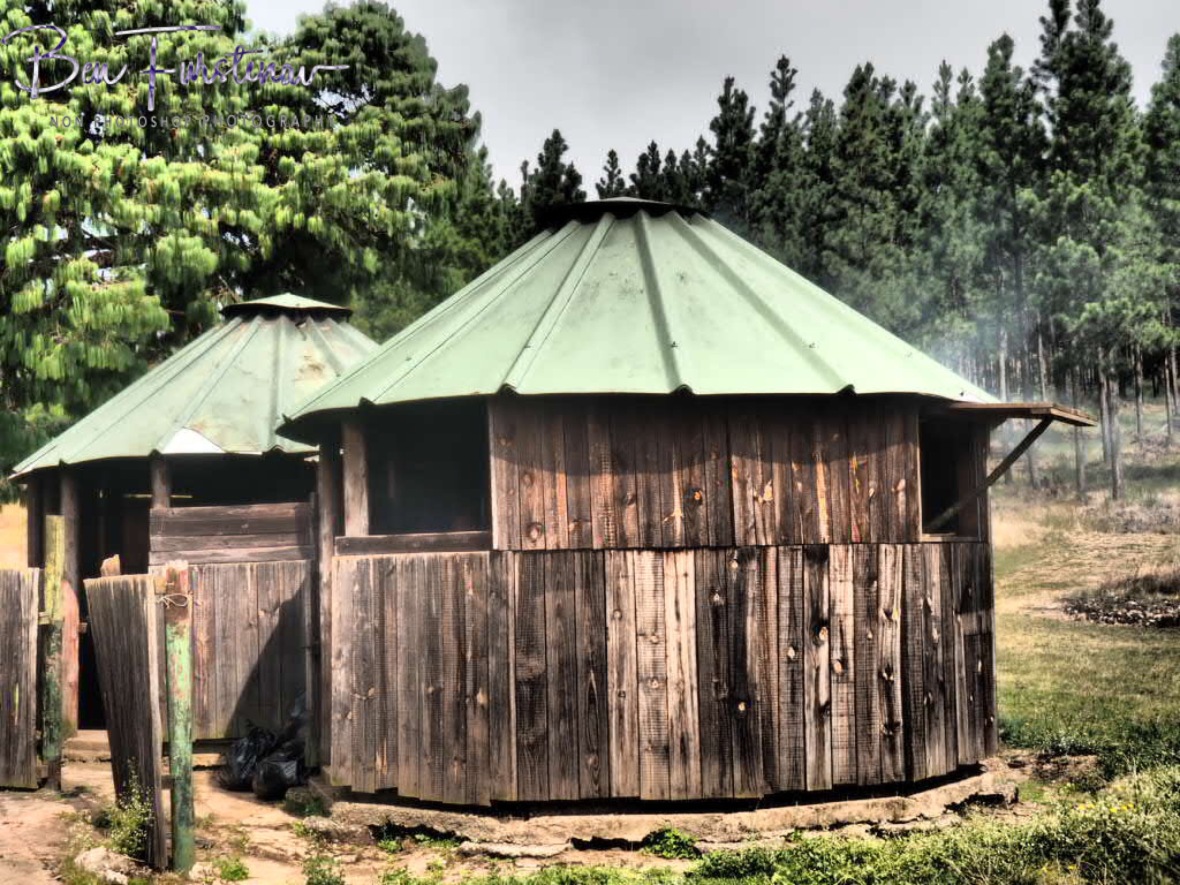 We drove a  steep hill up and arrived at ‘Hartebeestvlatke’ hut, which is part off a hiking trail through these mountains. Normally a great view over The Valley, unfortunately the fog turned in to low clouds and views were limited. 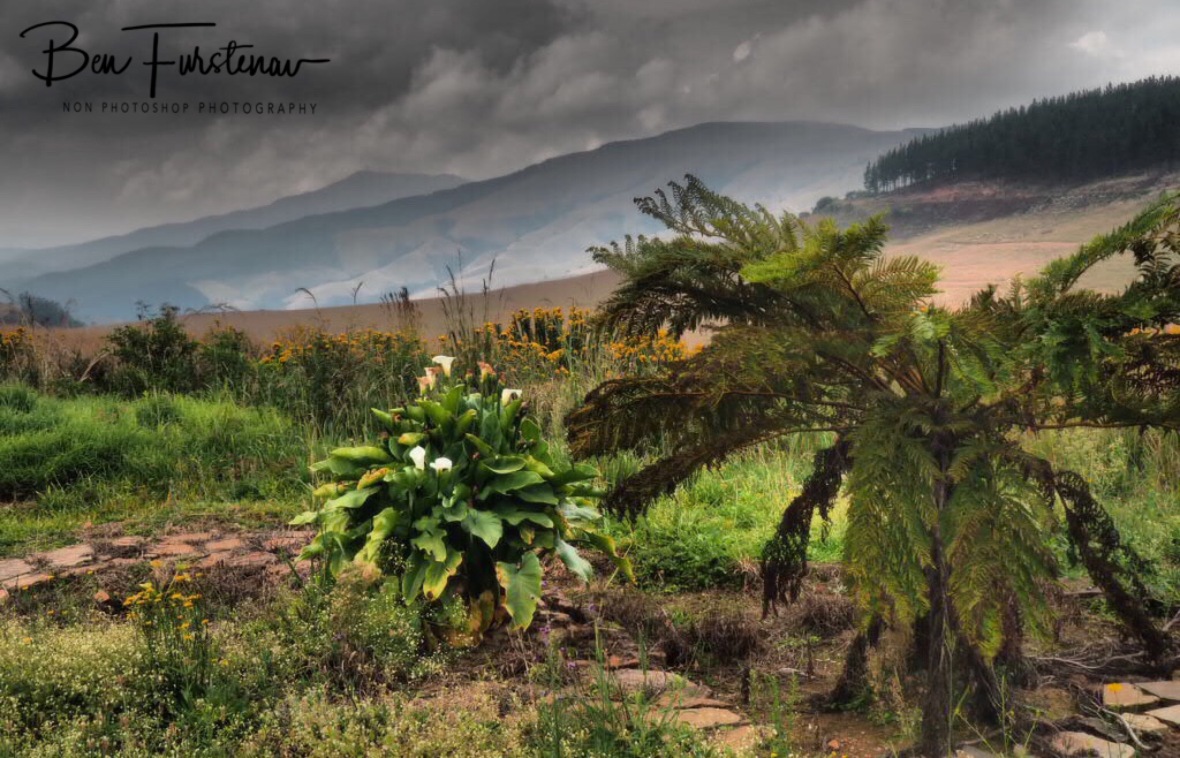 Zayne started immediately to light a fire, we needed some hot coals to cook on for our potjie Kos. 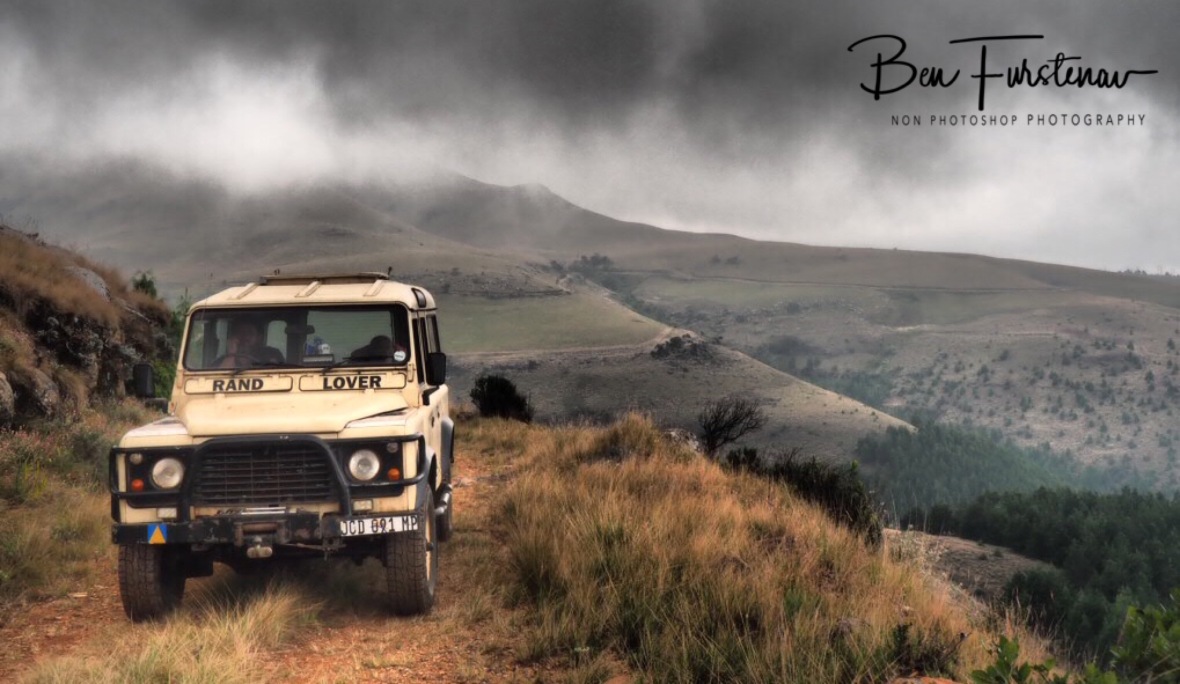 Up high just beneath the clouds, Sabie

Frikki and I jumped in to the Rand Lover, Jacques took us on a scenic trip around the mountains. Jacques said that he picked a broken down car up here once and brought it in to town on a trailer.

What a mission that must have been. Recovering broken or rolled vehicles is Jacques and Frikki’s business. Actually, everyone on this Sunday party is involved in recovery, one way or another. More to that later. 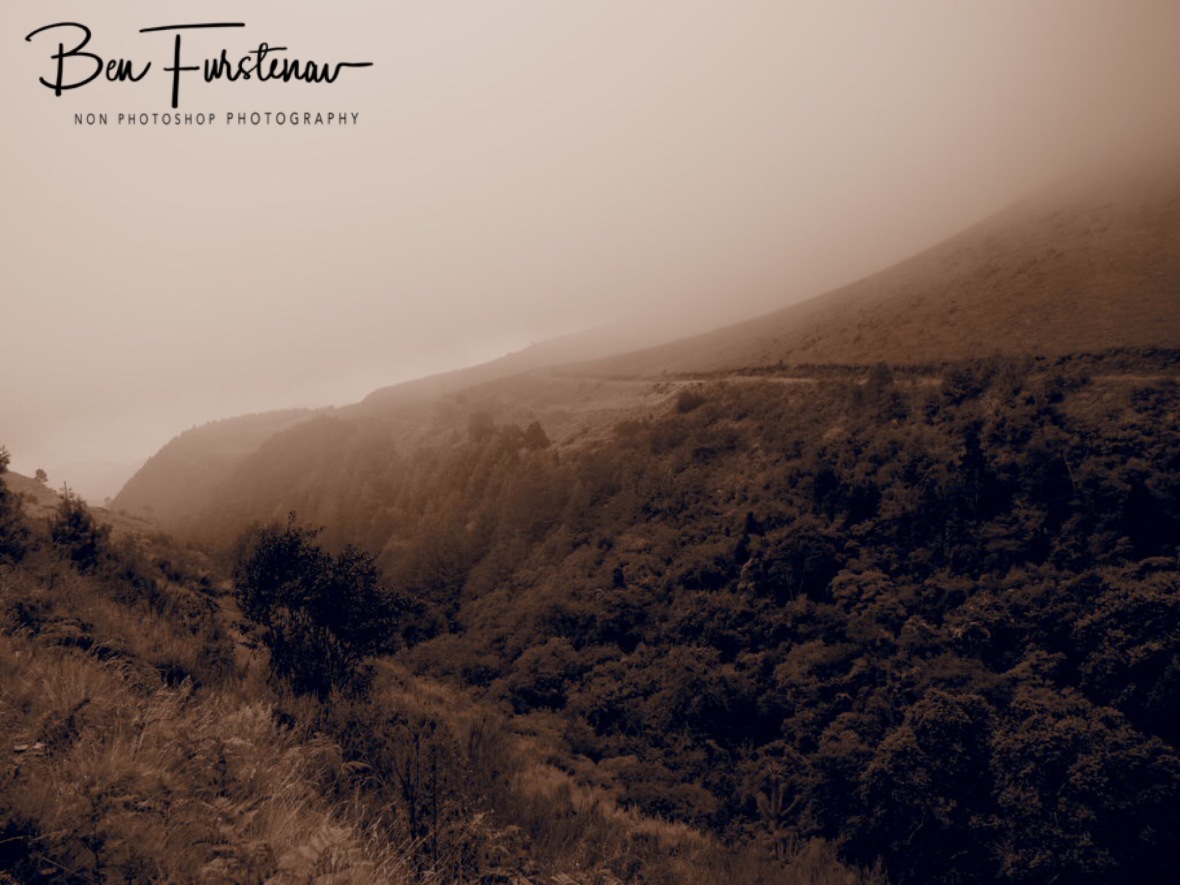 Low clouds rolling in over the hills, Sabie

We drove higher and higher up in to the fog, which was in many ways eerie but stunning. 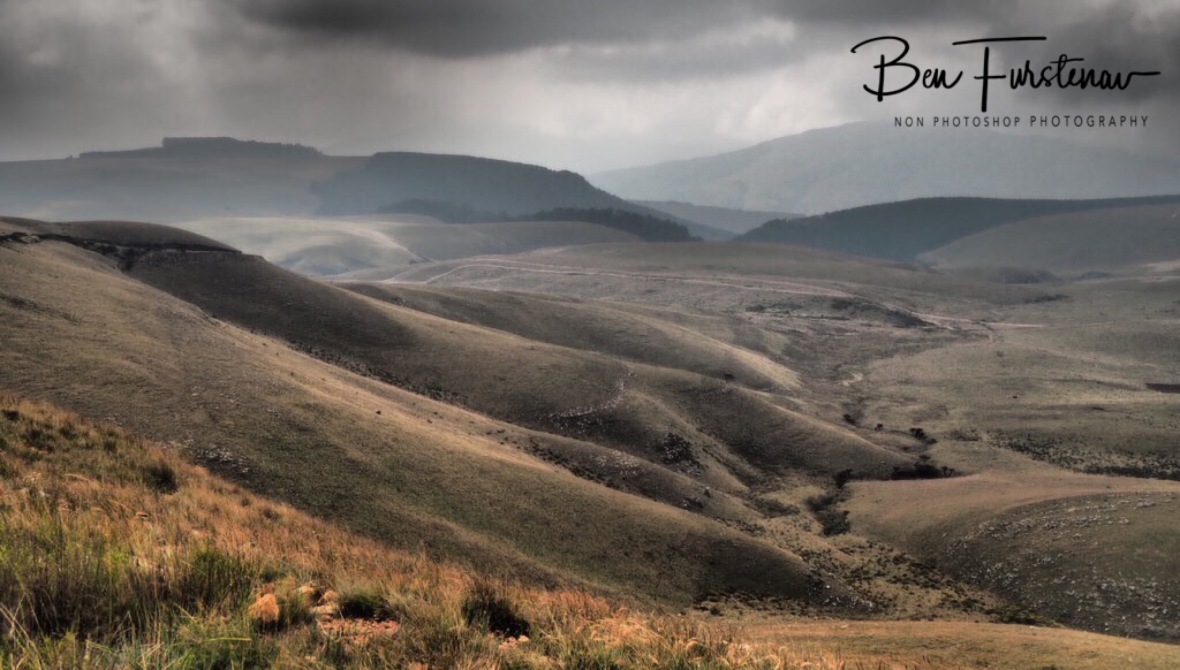 Endless view over the mountains, Sabie

Even these two haven’t been up this particular track. We saw a few different Antelope and Zebras out in the distance, they quickly disappeared when we were spotted. Poaching had reduced wild game numbers drastically, what else is new.

An abandoned farm house stood in ruins, memories off the past. It took us a few hours to complete the track, due to stop and go.

Through gorges and valleys, Sabie

Mainly because I jumped out to take a few photos. The view over The Valley in low mist was incredible.

The ‘Potje Kos’ (Pott food)  was stewing away on smokey coals and smelled delicious. A simple recipe for a simple tasty meal. Pretty much put all ingredients in the pot, place it on hot coals and stew it for a few hours. Frikkie made sure the coals are burning properly.

He sure looked happy around the fire and enjoyed the smoke in his eyes.

The rest of us chilled and chatting. 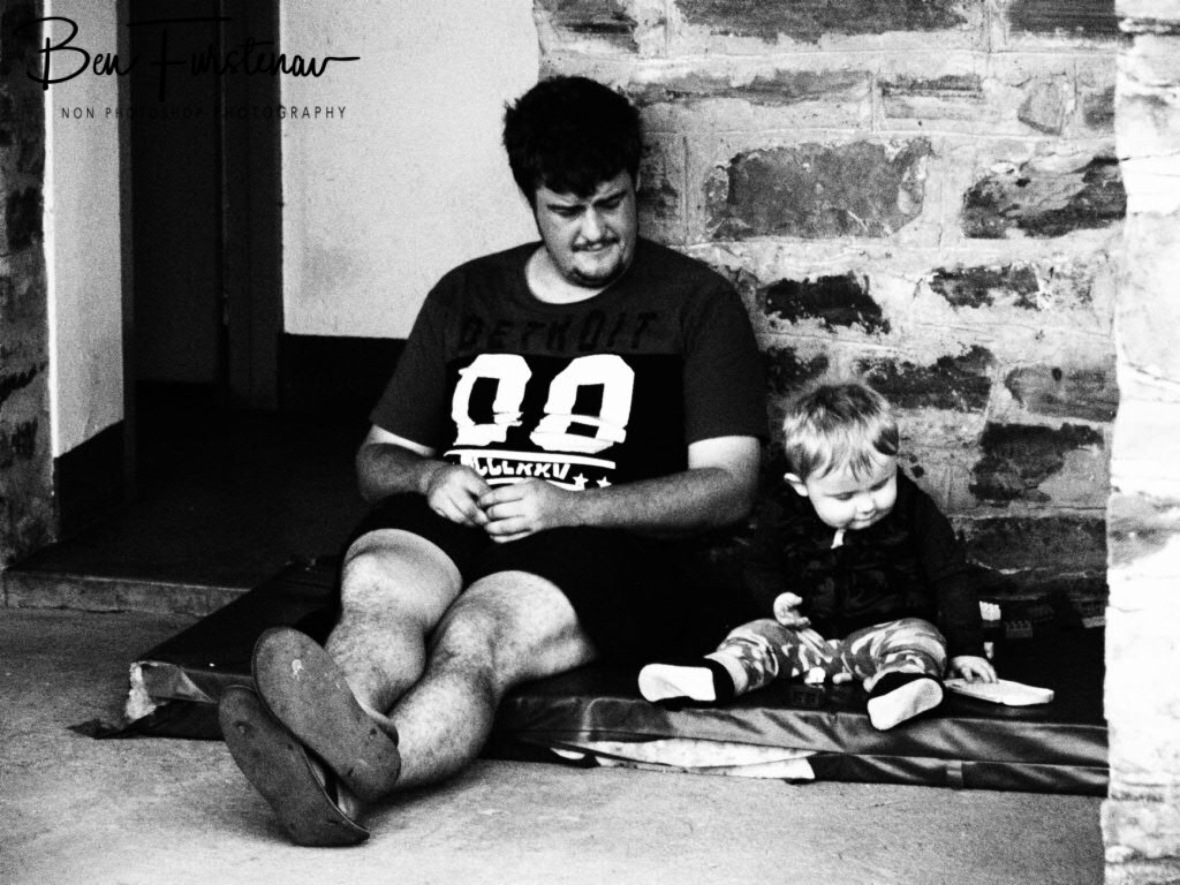 Jacques was full of smiles. A smile on the dial.

Before and during our delicious meal, I asked about the recovery business. These steep and winding roads are dangerous and ask for trouble. Speeding and alcohol, mostly combined, is a recipe for disaster. That is bad enough, but just to give you an idea on how the system works here in South Africa. 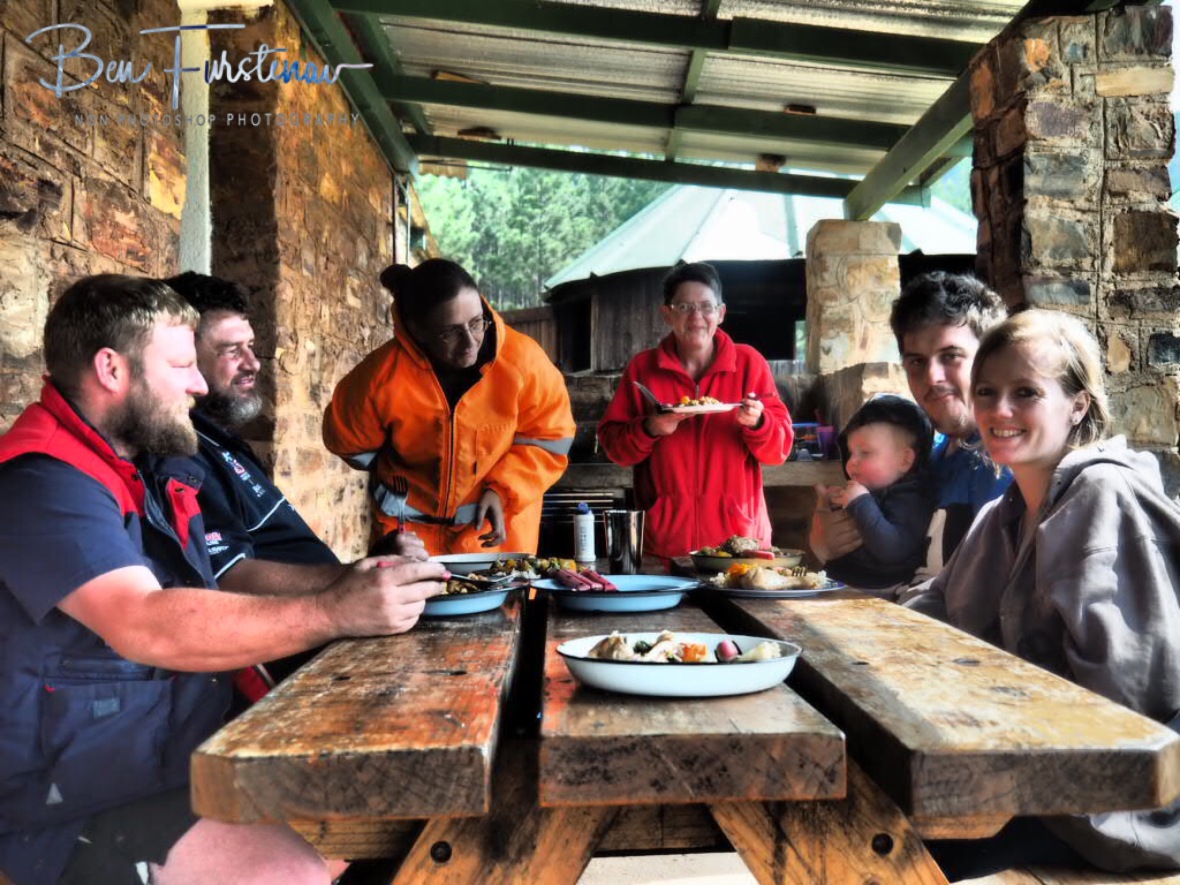 All smiles over Potjie Kos, Sabie

Jacques and the crew get called out for an emergency. Together with ambulance and police the chase begins. The newly implemented command office has no idea about this area and basically doesn’t care. Coordinates of wrong locations are sent out and by the time the accident scene is found, most of the people involved are dead. Police supposed to secure the area, but are busy chatting with colleagues or friends. If the injured are still alive, ambulance officers don’t take necessary precautions whilst attending them. People just get dumped on a carrier to be rescued. No neck brace, no patient check, no care, no hope. If they actually  make it to the ambulance, chances are high that there is not enough fuel in the tank or that oxygen tanks are empty. Basically, if you have a serious accident here, your chances of survival are slim to none. How is that possible, I asked? Surely someone must be held responsible?  Ja, Jacques said, but that’s not how it works here. ‘We investigate later’ is the common response. But nothing ever happens.

The night before, an ethnic driver, absolutely pissed and speeding, rolled his bakkie 60 meters down the bank. He jumped out before it rolled down, leaving his three mates to die. 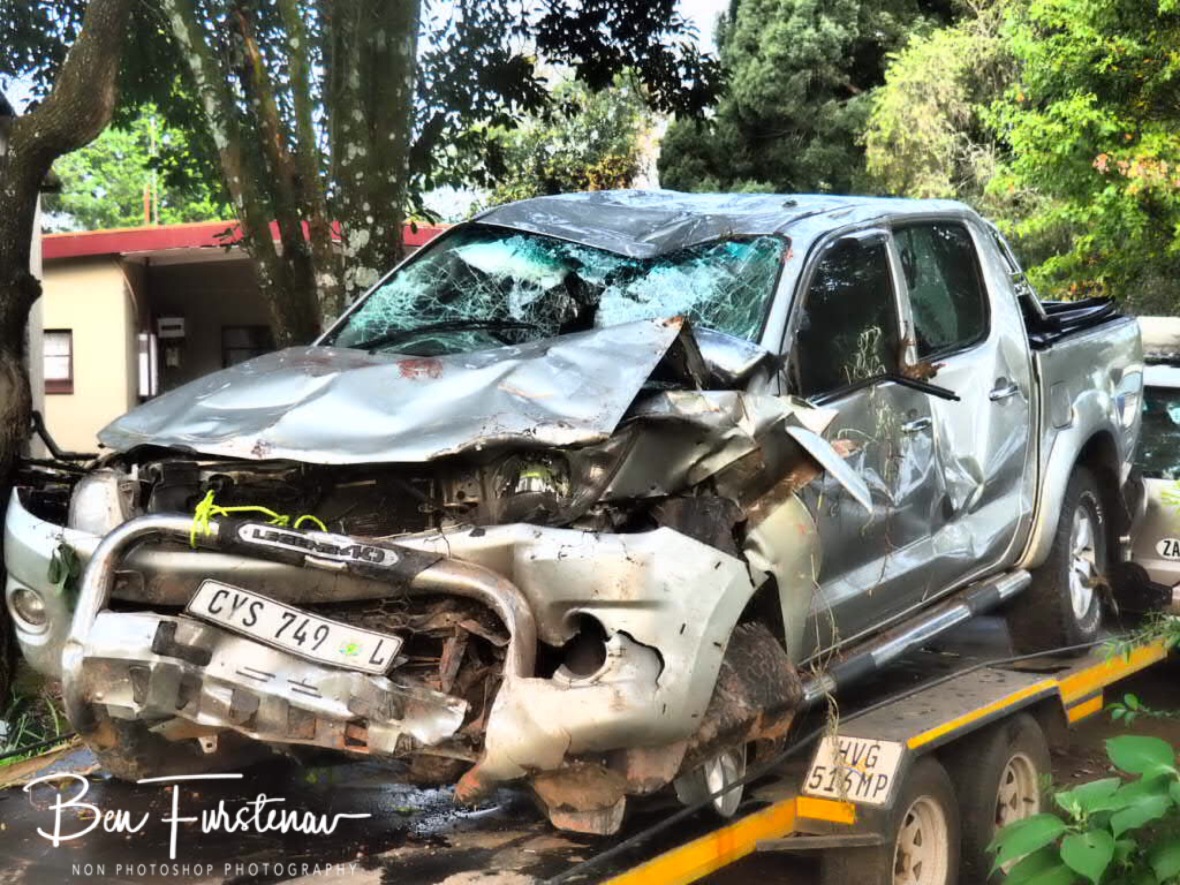 This was the result. Absolutely insane, hard to believe.

We packed up shortly after and made us on our way back home, not before a classic bakkie photo.

The lover and the Cruiser, Sabie

I am just amazed about the friendliness of the Afrikaner I meet here. Lekker. Thank you everyone to make me feel as part of the group, part of the family. A complete stranger 24 hours ago, now friends for life.

We had a coffee at Frikke’s home, as the phone went off. A family of Pakistani burned their clutch driving up Panorama Highway. I joined Jacques and Frikki for this mission. I counted 4 broken down cars and one larger bus, within a few kilometres. Breakdown highway would be a more suitable name.

We arrived to a  2015 Toyota Forerunner, a whole family waiting for help. The vehicle was heavy to tow, a trailer was needed. Jacques explained his price which leaves him with little profit. Yet, Mr broken down started to haggle on a fair price. I just laughed at him and asked him if he is for real. I would have jumped back in the car and doubled the price if he was to change his mind. The ignorance and arrogance of some people is simply astonishing. Jacques has a too big heart and often gives in. That won’t pay his bills though. 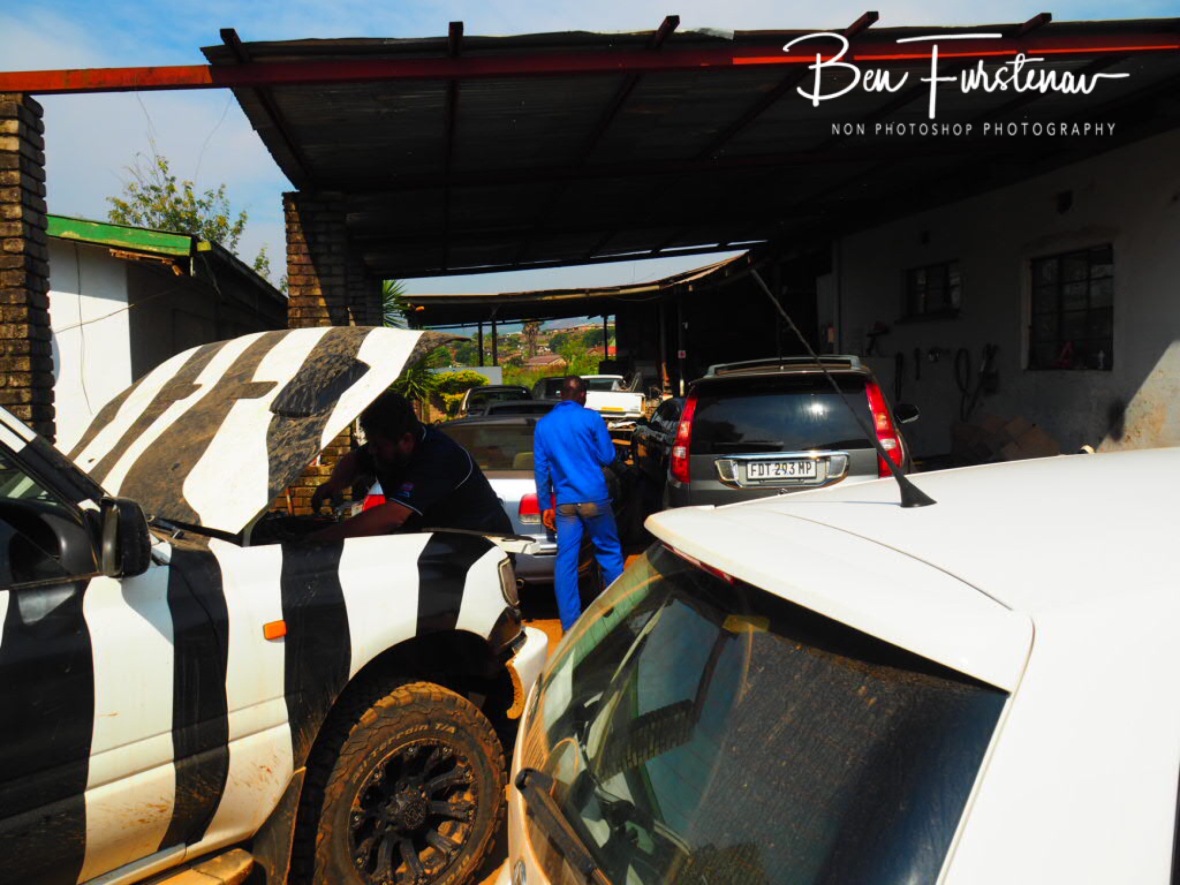 Zimba and the mechanic, Sabie

Jacques wanted to quickly check Zimba’s thermometer next day, to see if this is causing the ‘Madman’ (turbo charge gage) madness. It was working, but a new one would be a better idea. The delivery wasn’t arriving before 11 am, if I was lucky. Meanwhile, nearby shop owner Shakiry noticed his cleaning maid sneakily making a grinder disappear in her bag. He asked her to get some groceries and checked the bag. It was Jacques new grinder, as the previous one disappeared mysteriously a week ago. The cops were called and the woman questioned by her return. She denied the bag was hers, as you would. Even with a witness and proof, she got a slap on her hand and collected her pay before leaving!?

Shakiry showed me his shot wound later and told me, that just recently 4 crooks with pump action shot guns robbed him, drove off with his BMW to leave it trashed in a field. People just have no respect for other people’s property. It really is hard to comprehend what is going on down here. Future prospects are not getting better, but most Afrikaner are broken and accept the way thing are.                                                  A few more facts are, that if an intruder is in the house, one can not handle him and watch him taking your belongings.  If you do handle them, you are the one going to jail, just by protecting your family and belongings. If the police does arrive in time for an arrest, he could simply say, that he doesn’t want to be arrested and walks of.  Landclaims are another issue. Anyone coloured could take any tombstone, leave it on the farms property and then say, this is his ancestors land. Even though this farm or property has been handed on for generations, the farmer is absolutely defenceless  and watch their property been taken off. In the case off that happening, the farms are run to the ground, literally, in no time and dismantled, leaving only a few walls behind, as a reminder off a once, not too long ago,prosperous farm.It is heartbreaking and frustrating for me to understand.  This was just one day for me in Sabie, imagine living here.

I spent the afternoon back at Gypsy Backpackers. New owner Brian relaxed with a beer, whilst daughter and manager Sandy was busy organizing the new establishment. Just opened recently, there is lots to do. There really is a relaxed vibe here and I really enjoyed their hospitality. I can most definitely recommend this budget accommodation in chilled atmosphere to anyone.

2 thoughts on “Hartebeestvlatke, and a typical day in Sabie.”