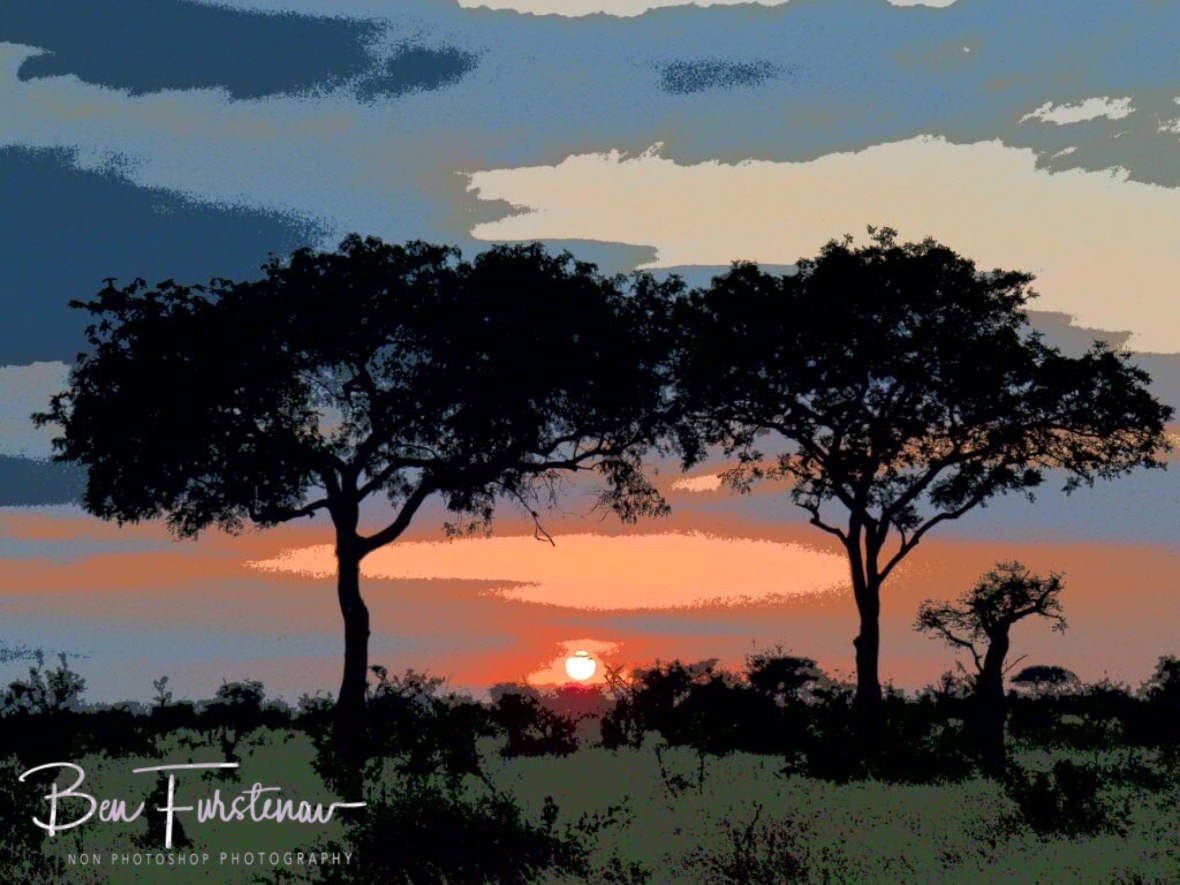 It wasn’t a resting day for me but for the animals it seemed. The grassy plains, teeming with grazers yesterday afternoon, appeared desolate and errie. One can only think that the thunderstorm scared them all off. The rain settled the dust on the sand track nicely and it was comfortable to drive. 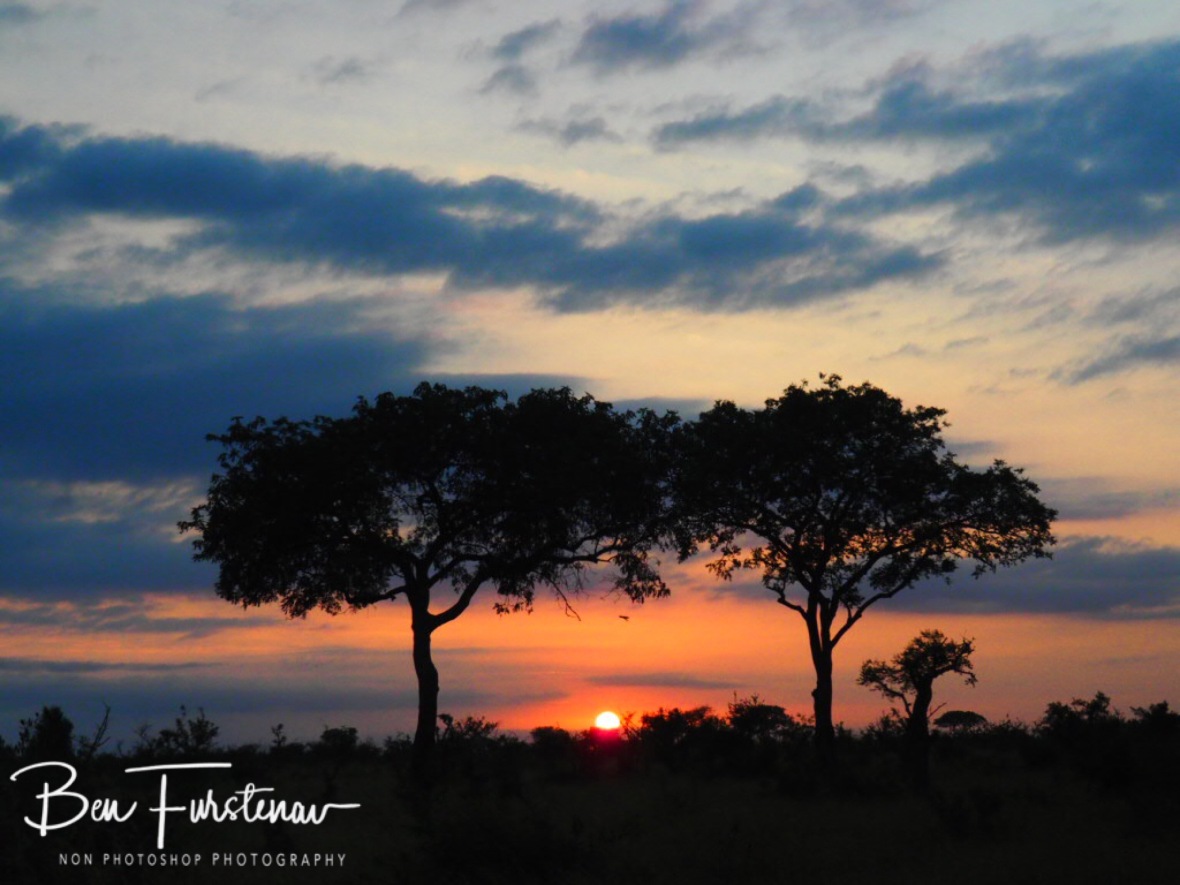 My friendly camping neighbours last night told me that there are three cheetah mothers with cubs living in this area! This was my mission today. With almost no animals around, I concentrated on the rising sun. A holy cloud cover gave the rays a chance to shine through, quite spectacular really. 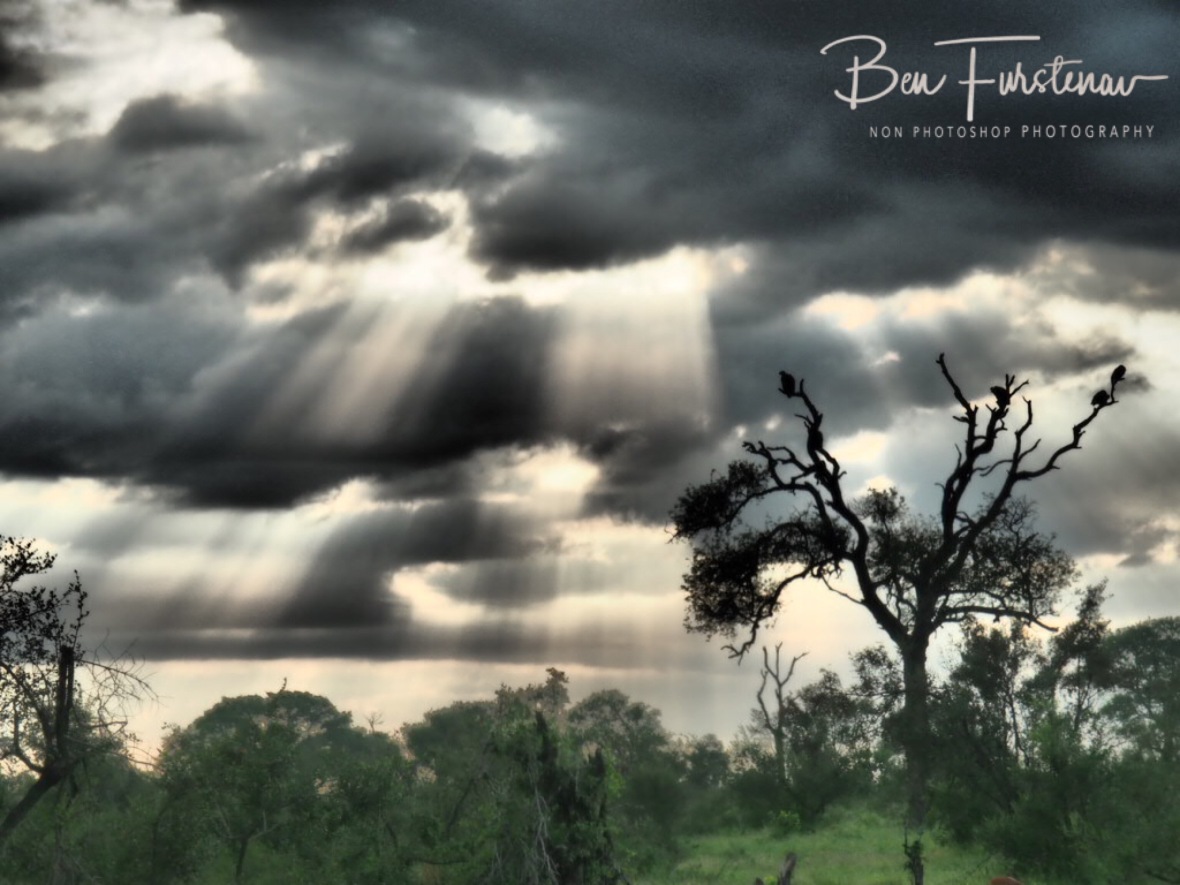 If the wildlife spotting gets a bit slow, one can always rely on the biggest of them all. 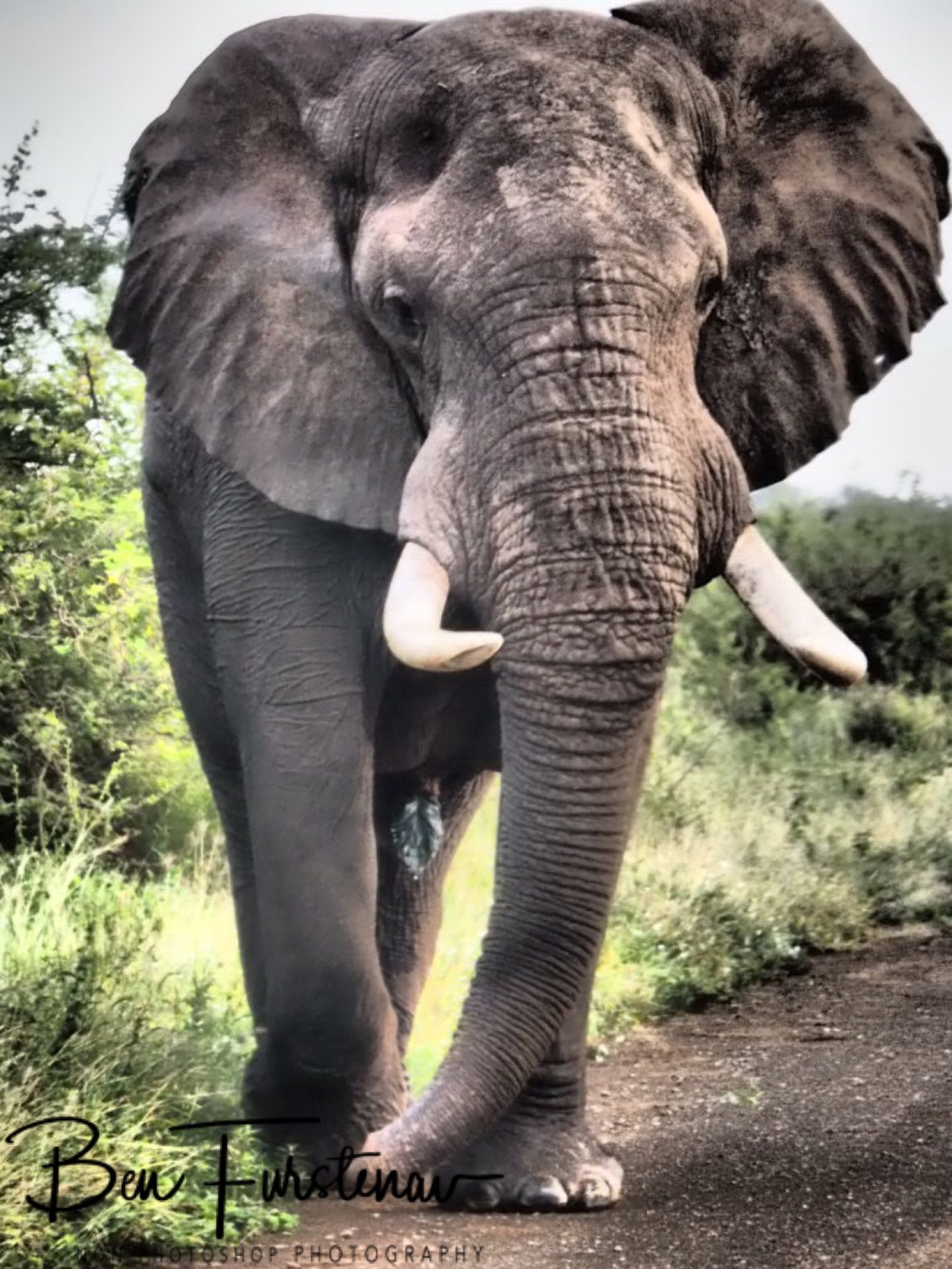 And this one was huge. Estimated at around 30 Years of age, this bull was colossal and left a trail of cars behind. 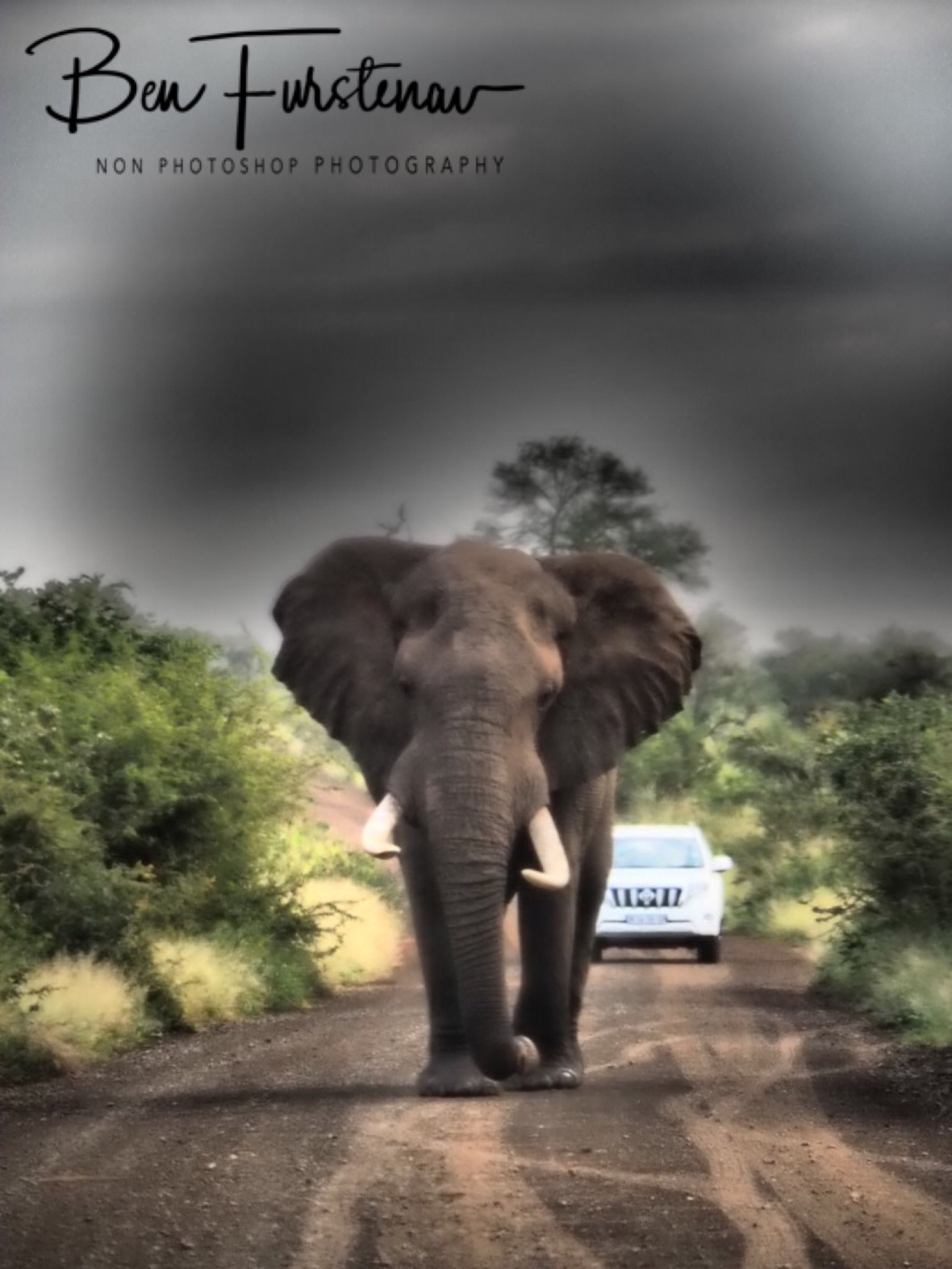 Clearly the king of the road, Kruger National Park

He came towards my direction and with flapping ears signaled who owns this highway. 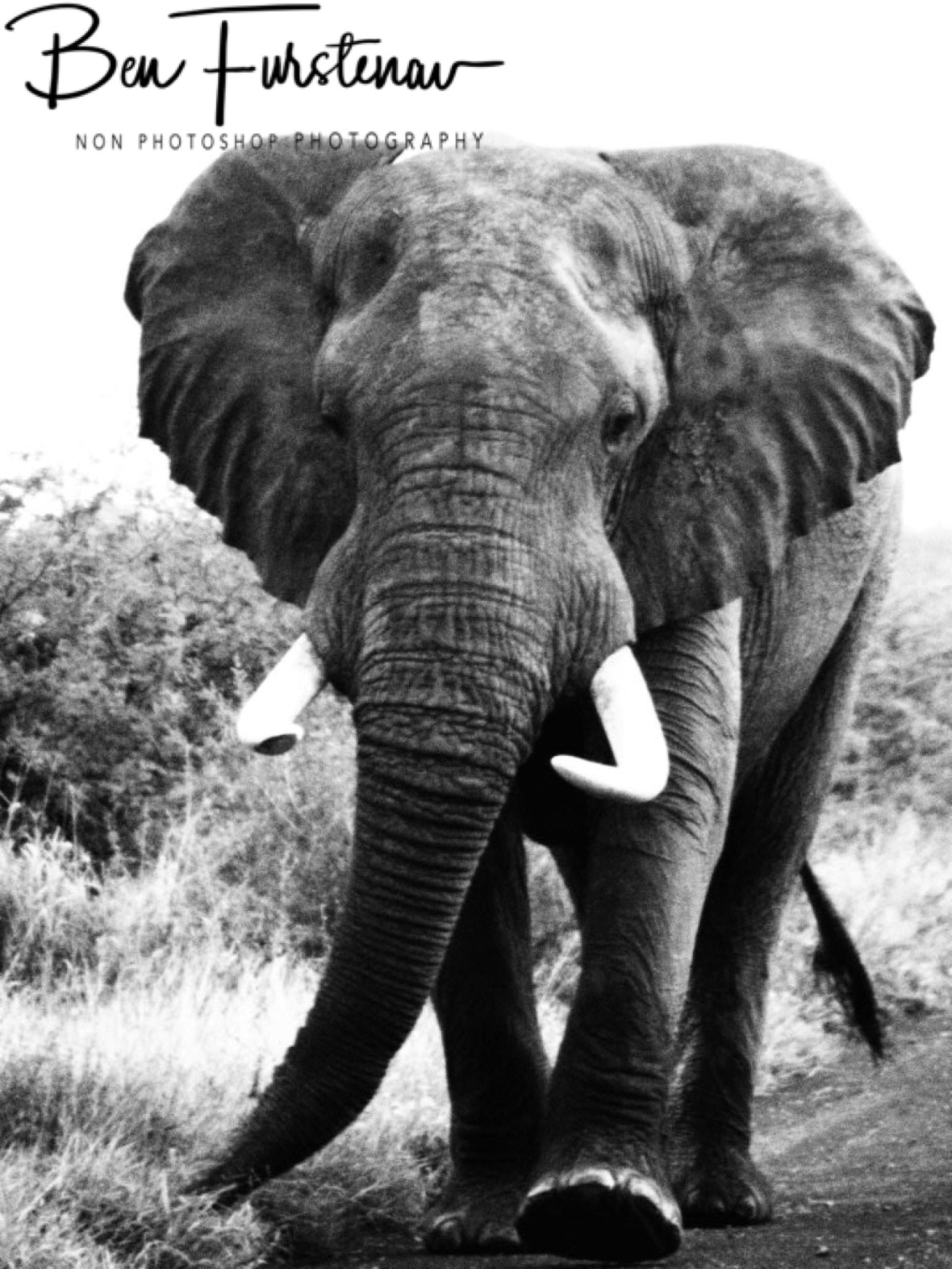 I politely reversed in sync with the cars behind me for a good 400 meters. There was a turn off road to a Hyde, which ran parallel to the street. My escape route. 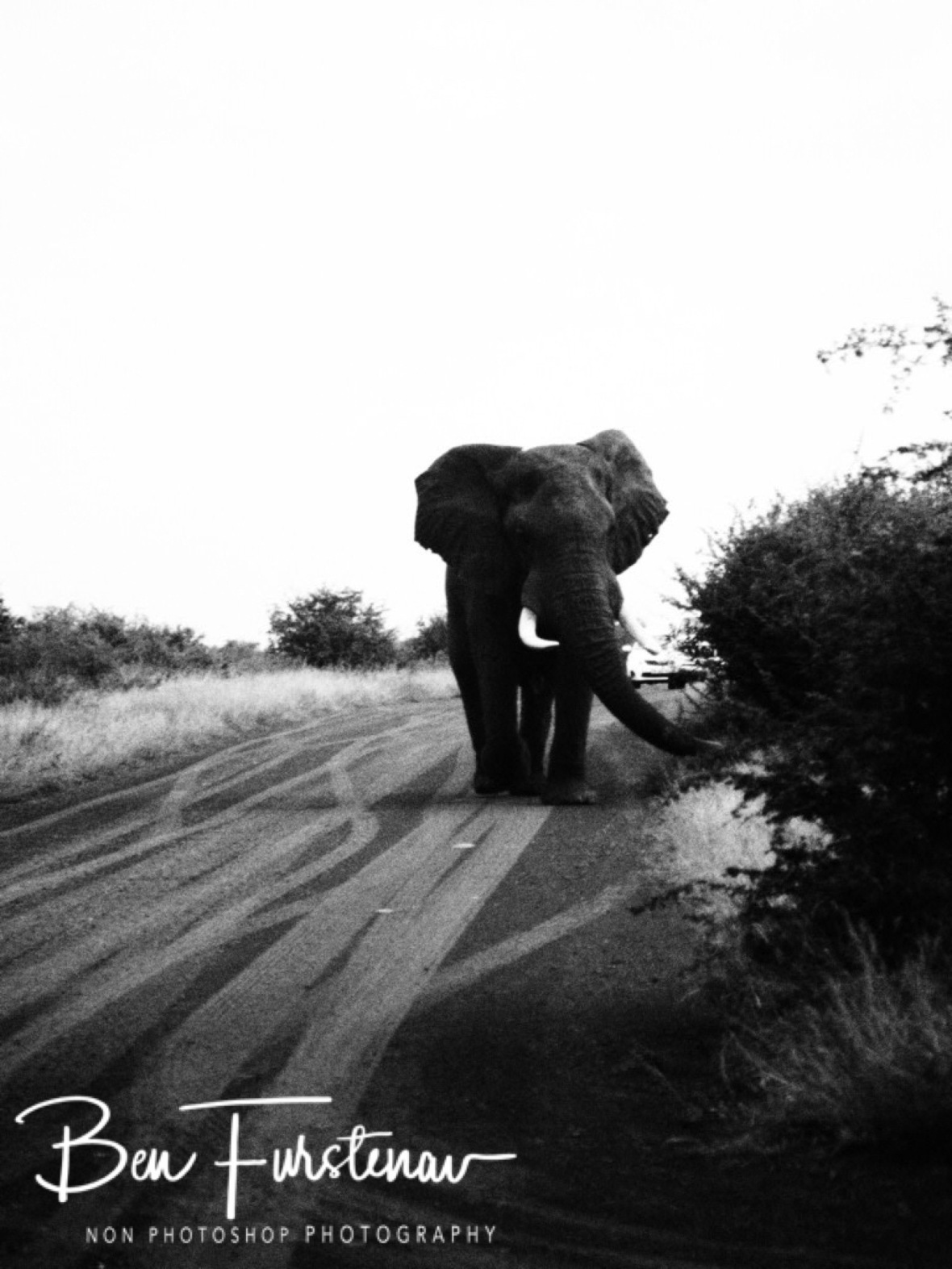 Is this Bull elephant going to follow my Zimba, Kruger National Park

He seemed intimidated by the oversized zebra, it looked like he wanted to follow me. The driver in the white bakkie, slang for 4WD,  told me later, that they followed him for about 40 minutes. He even turned around and chased them off. He was a loner, he didn’t like followers. He also mentioned that the bull had a lump on his belly. Sadly, some elephants here have been diagnosed with TBC. It would be sad to see an aged giant like this die becuase of a human strained virus. 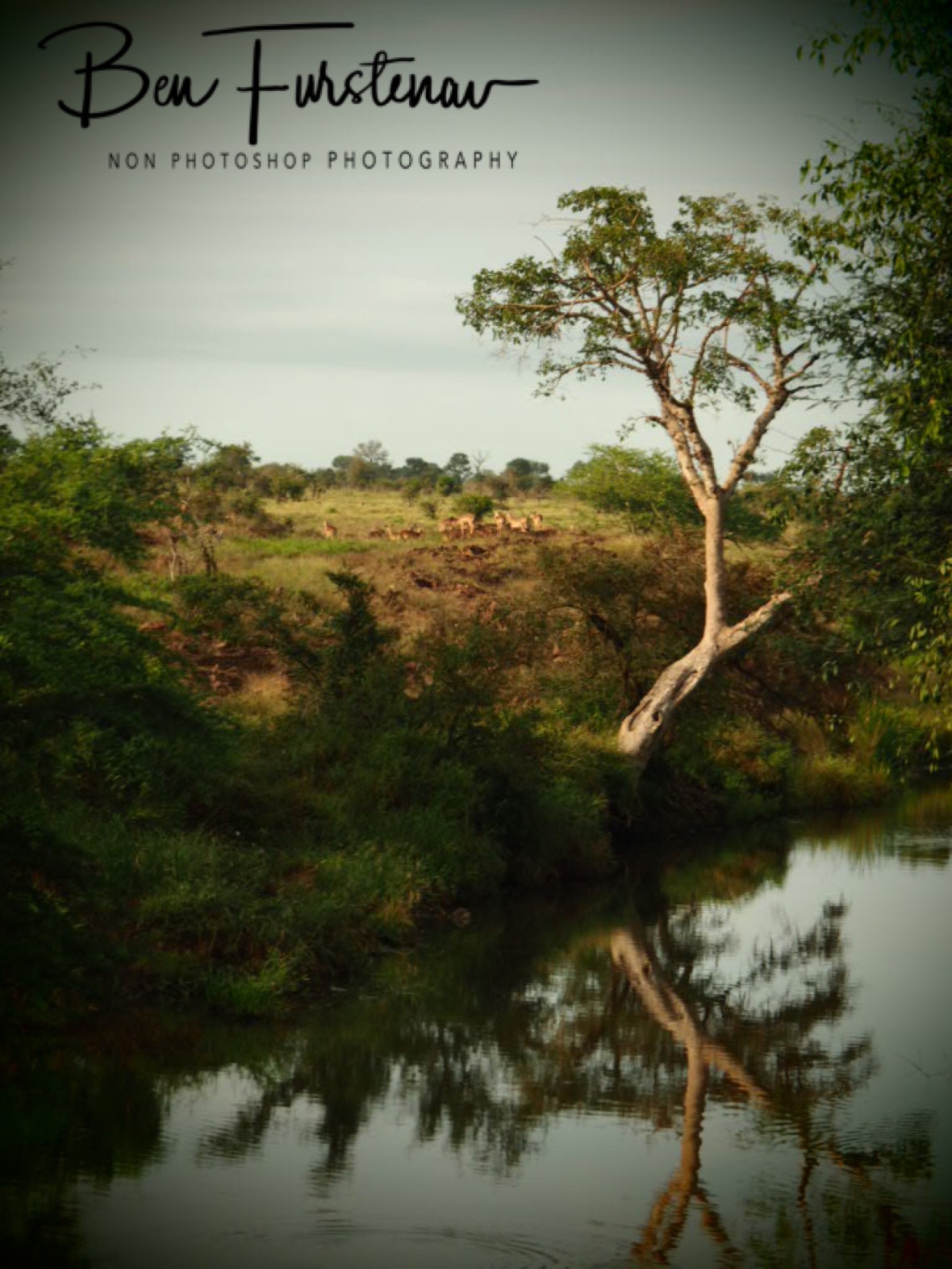 A tranquil morning in the Hyde, Kruger National Park

Not much was happening at the hyde, apart from coffee. Pretty much everyone had the same idea, it was an idyllic spot for breakfast. No one had encountered any exciting sightings, it was quite all around. Lower Sabie Rest camp was busy. Nicely settled on the Sabie River, it’s a good spot to enjoy some rays. 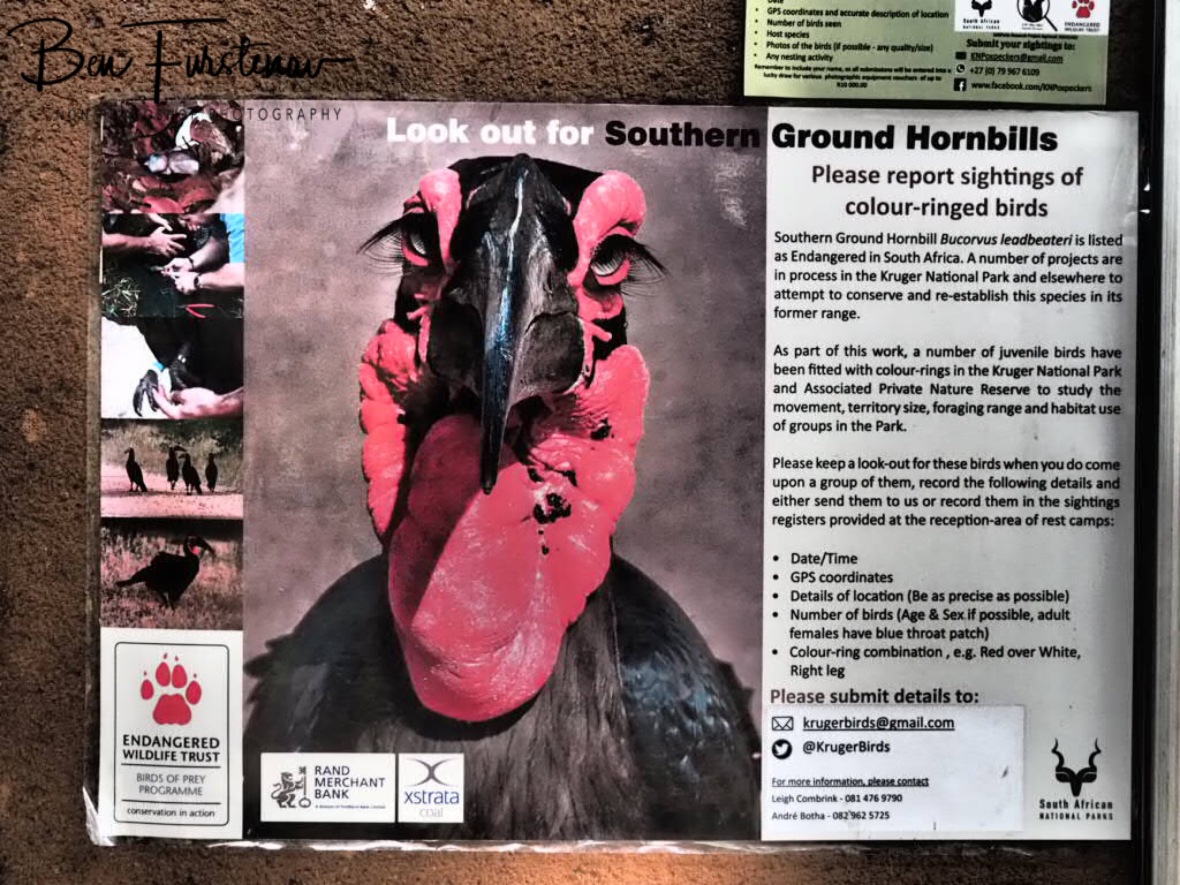 I stumbled over a poster from the hobbit, they still are looking for that ring. Word came out that a pride of lions was spotted. Lion around on the dry water banks on the Sabie River, just north of here. Traffic congestion was one way to describe the spectacle. 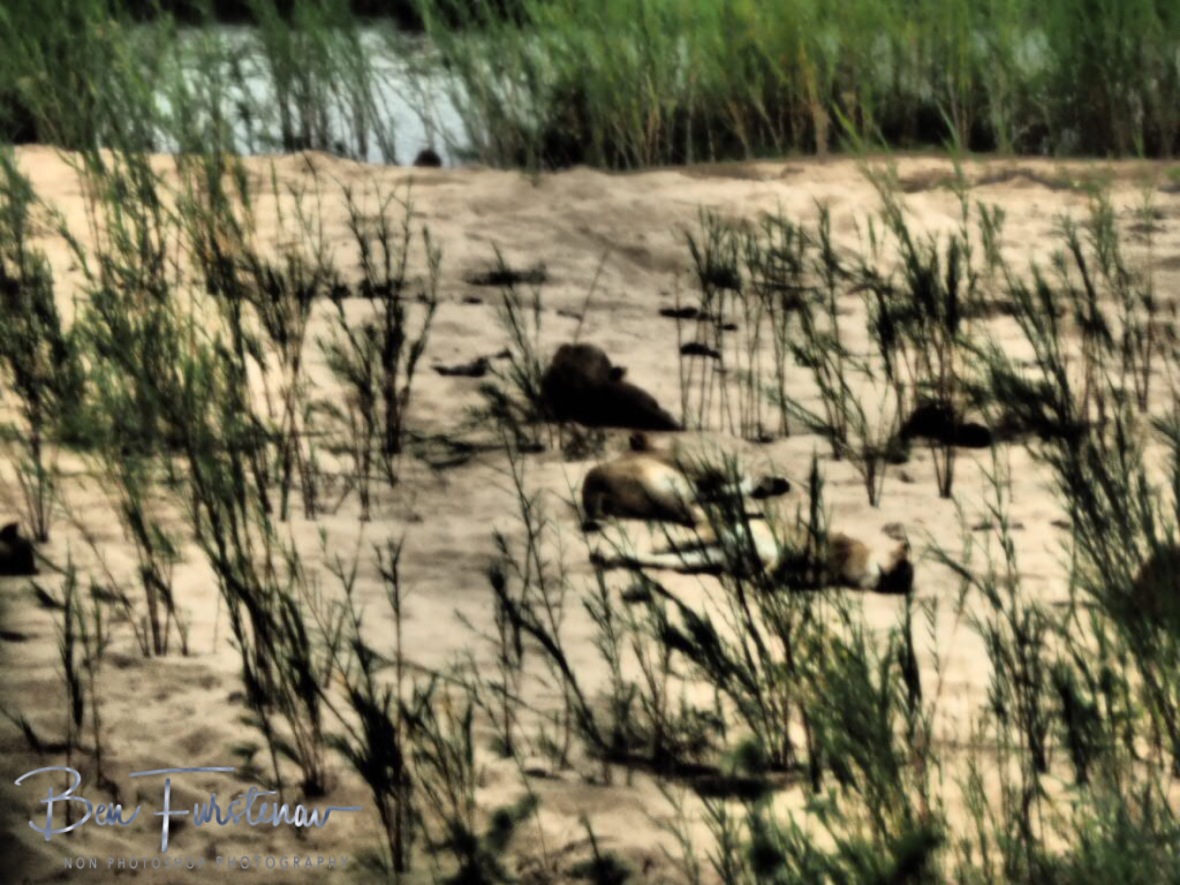 Lion around at their best, Kruger National Park

And that was the only thing that barely moved, the lions didn’t. A bit of monkey business came up on my way to Skukuza Rest camp. 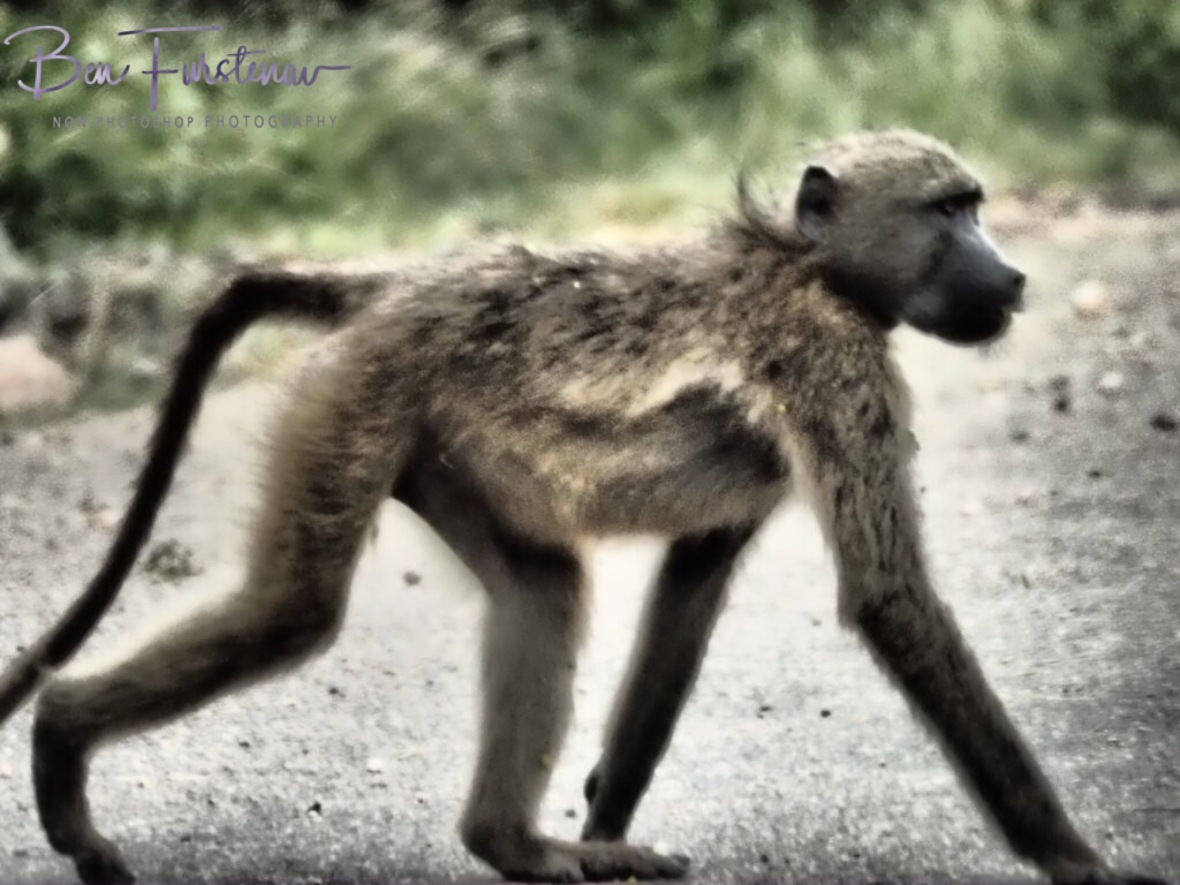 A large pack of baboons swarmed the street, coming out of nowhere. 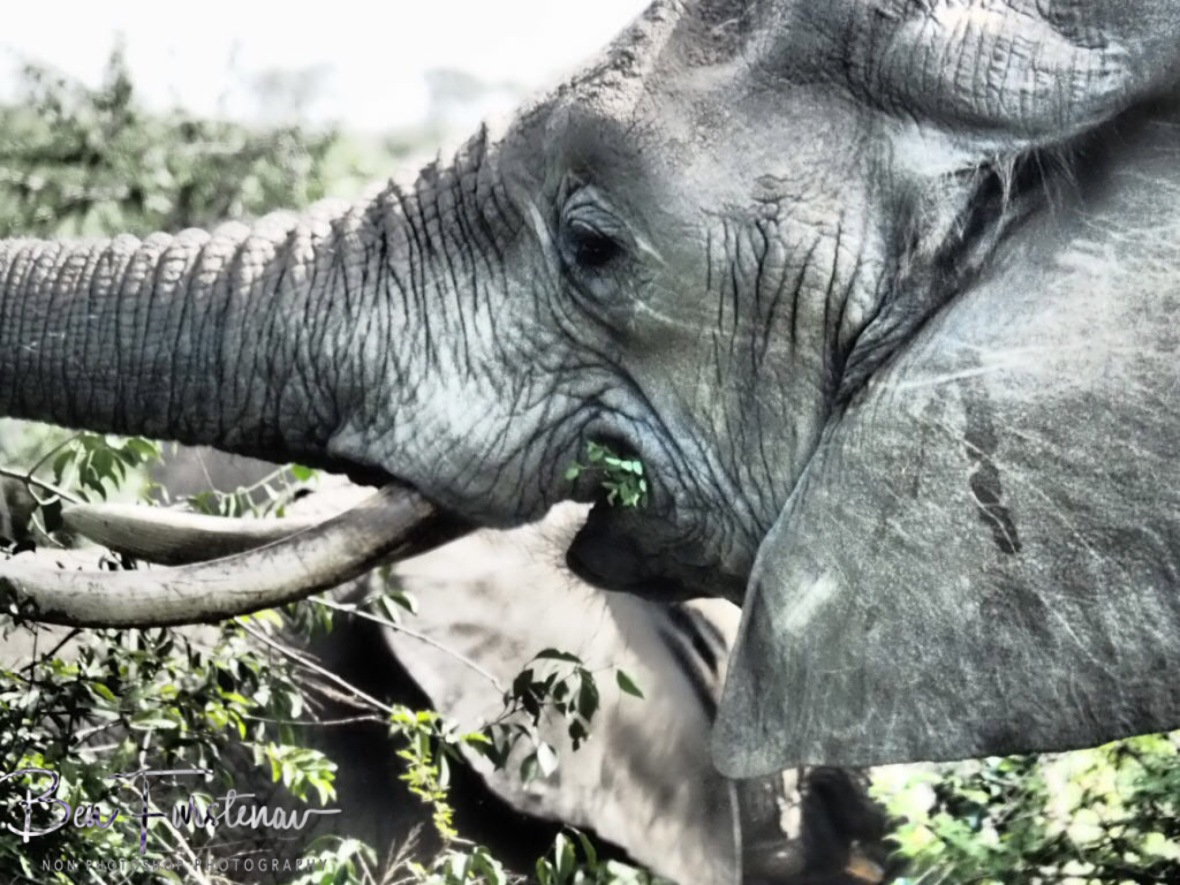 Then there is the old grey favourite; More elephants. 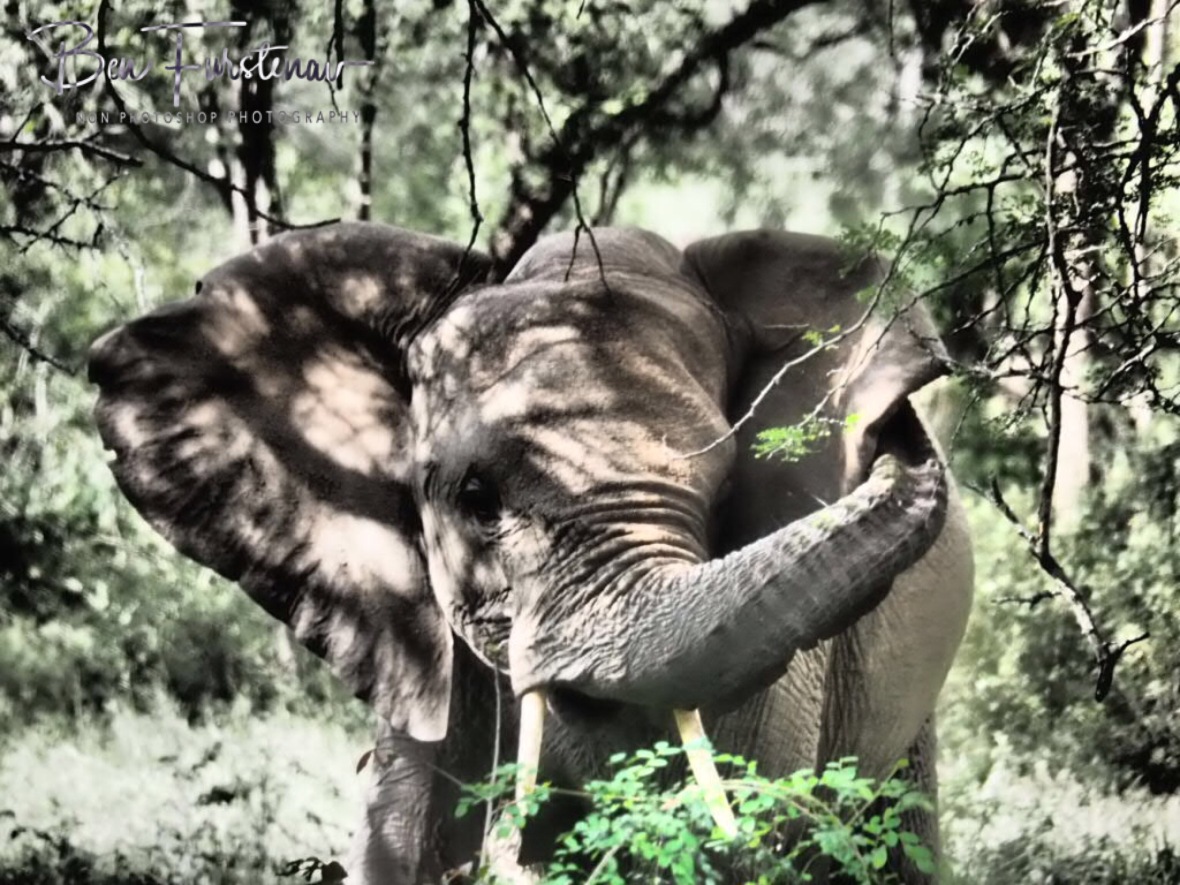 I find it hard to think I have taken ‘enough’ elephant photos, but it is always different. 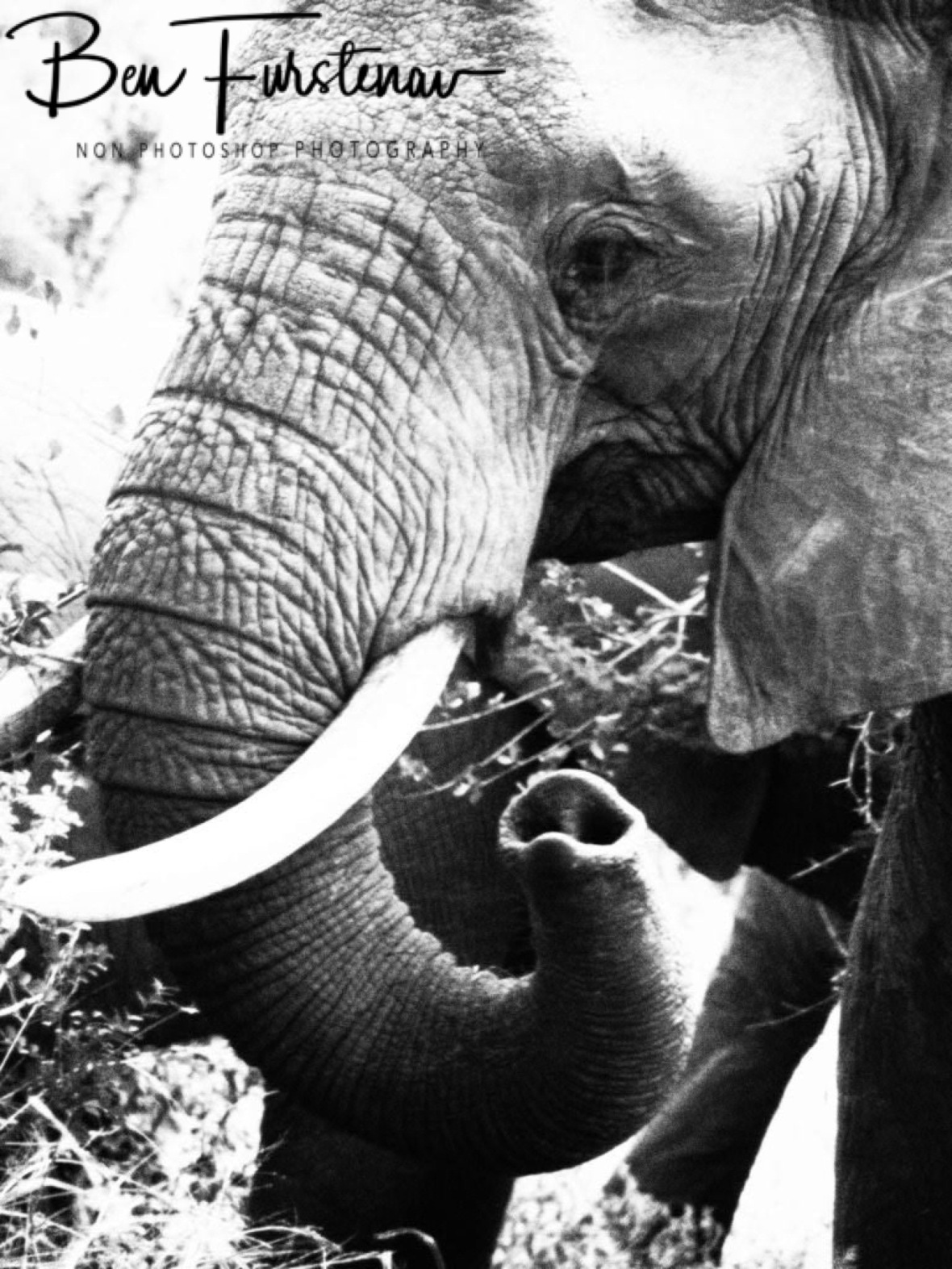 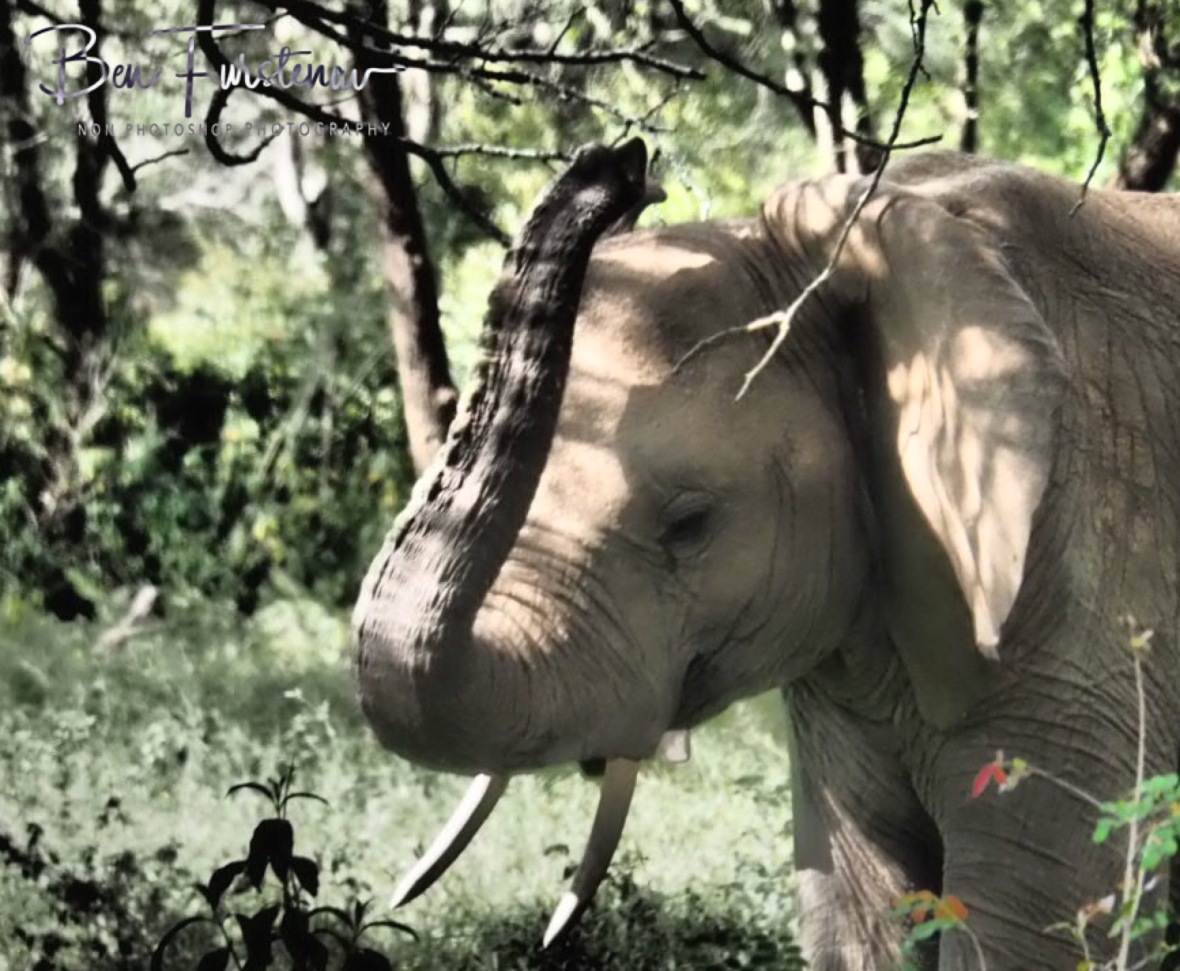 Particular hard to resist is it to take photos of the young and tiny ones. They are always surrounded by one family member. Still so cute. 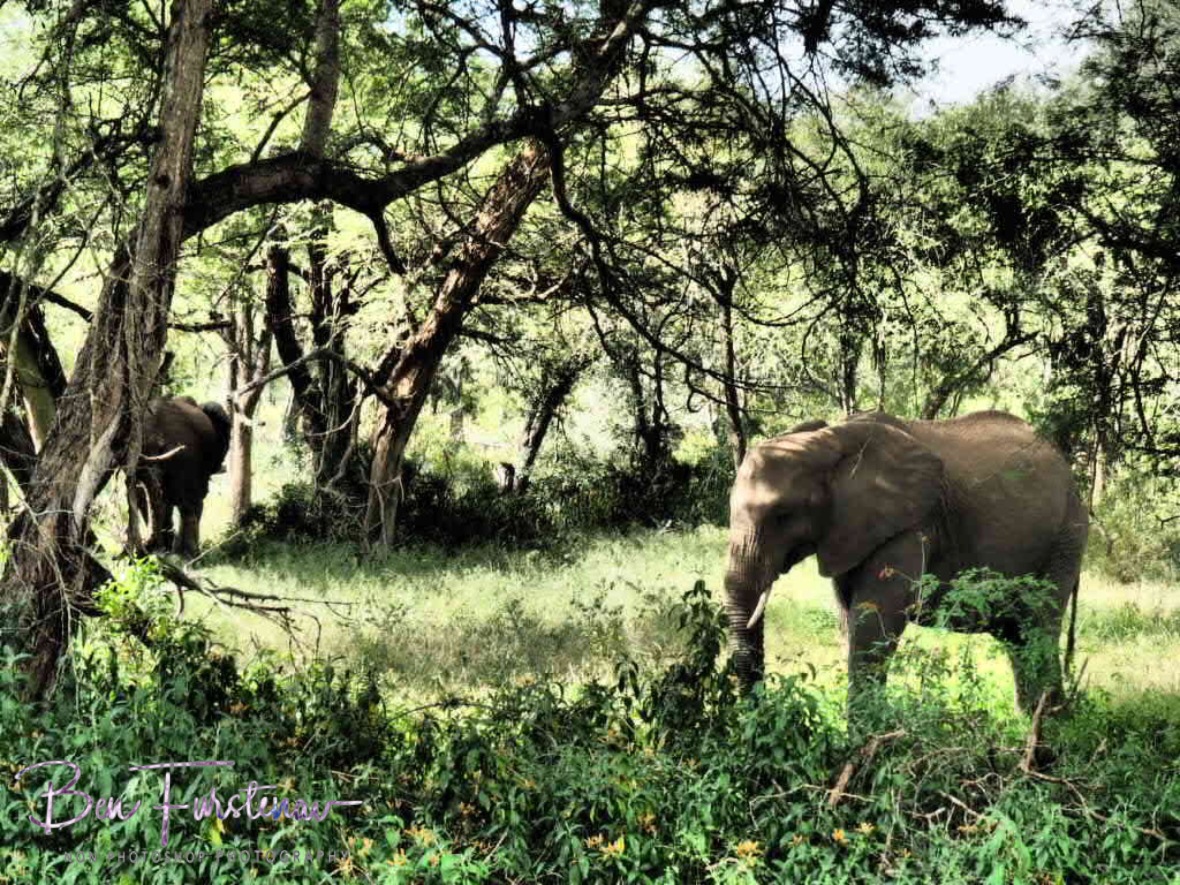 I made my way back to Crocodile River camp, still no speckled cat in sight. Slightly disappointed it seems cheetah photos are delayed. It was after lunch already and I had to step up a gear, to make it across to Malelane campground. A kudu family enjoyed some greens, while a cheeky vervet monkey group was playing in the background. 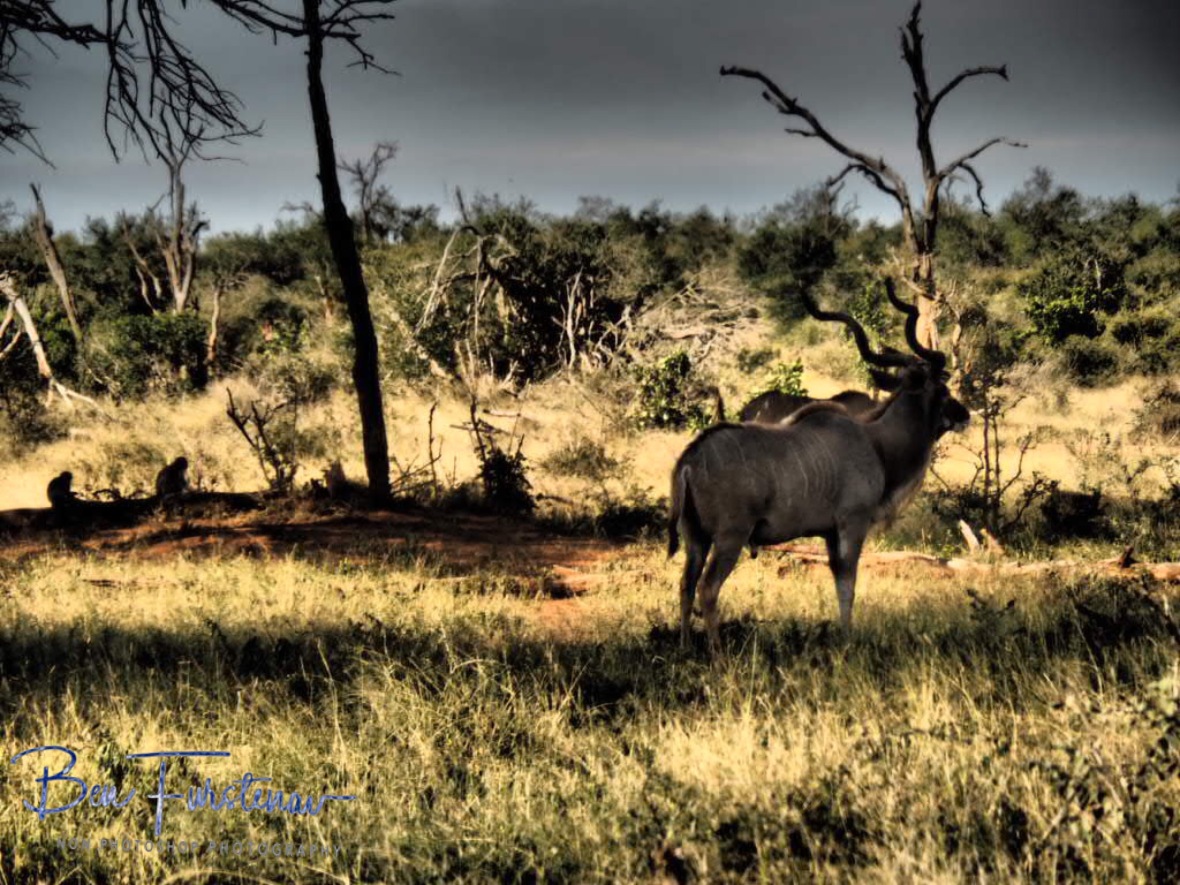 Kudu is having no monkey business, Kruger National Park 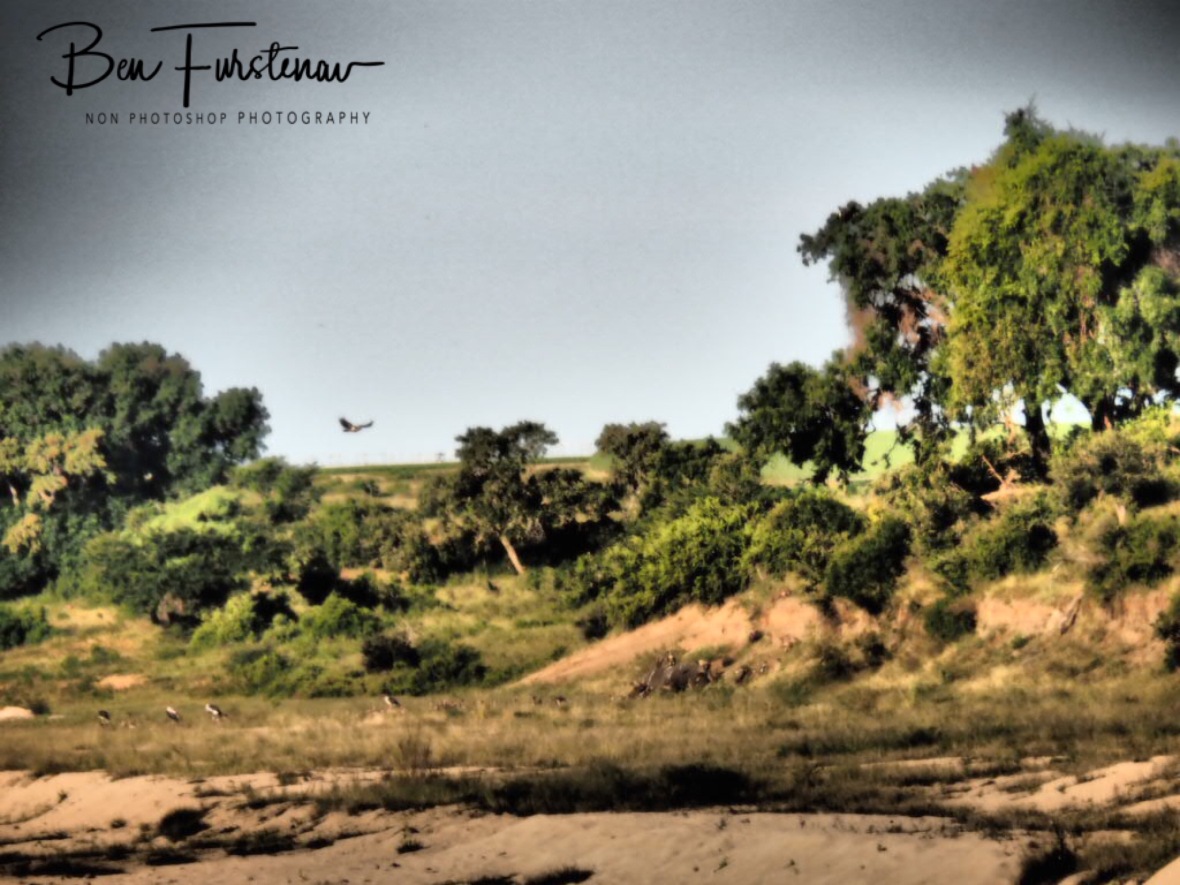 A bit mysterious, as it would have been too big to tackle by predators and ivory is still noticeable. Poor thing must have died overnight as this scene wasn’t seen yesterday when I passed thru. Interestingly enough, no hyena or jackals were spotted. 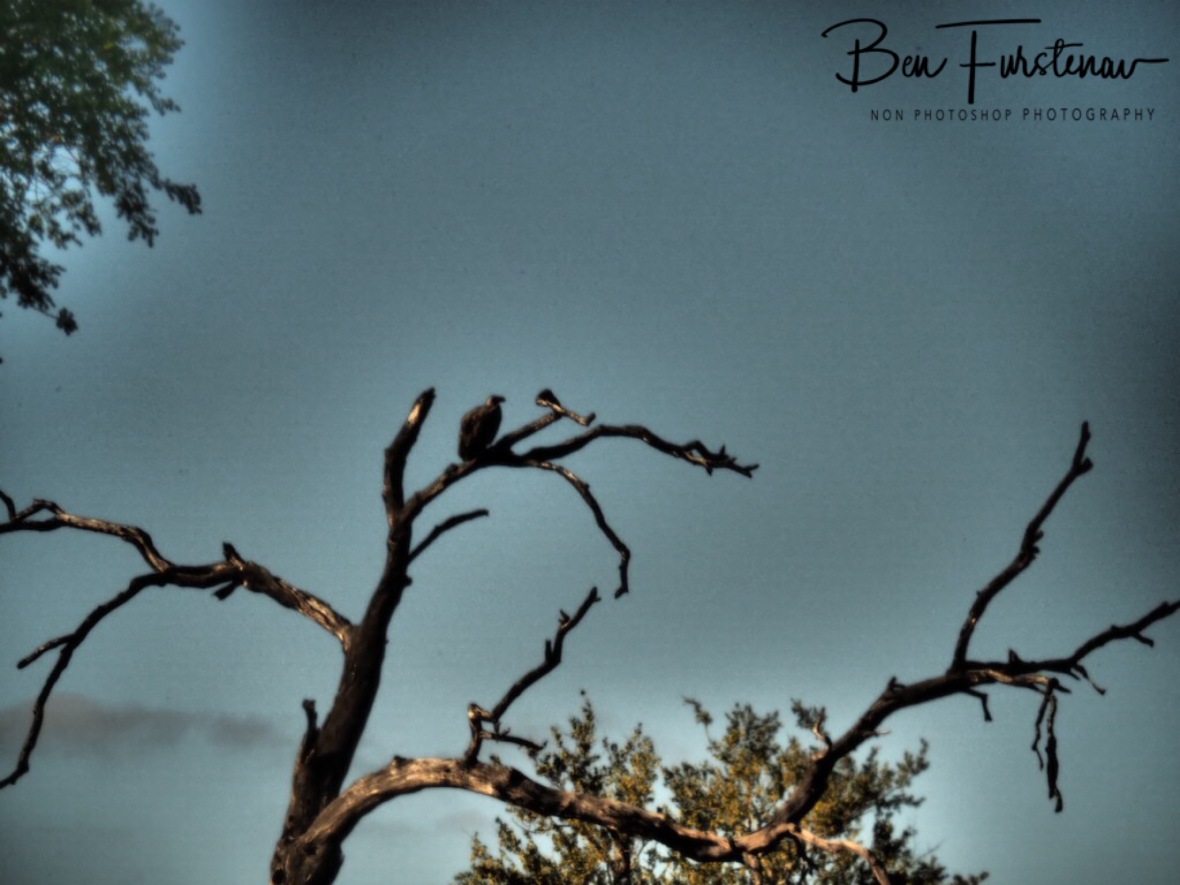 Some vultures waiting for their turn, Kruger National Park

Just the scavenging flight commando. Some waited for their turn. 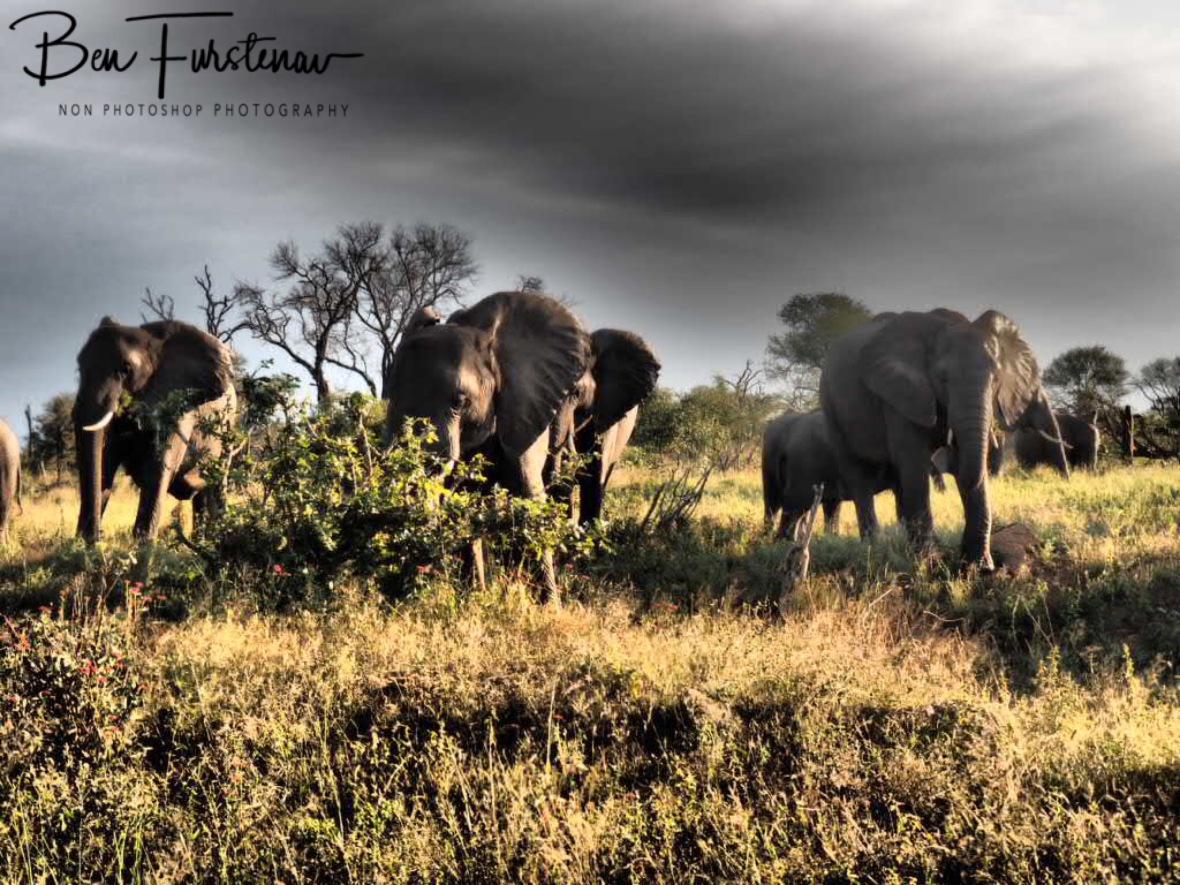 Moving on, another herd of elephants crossed my path. 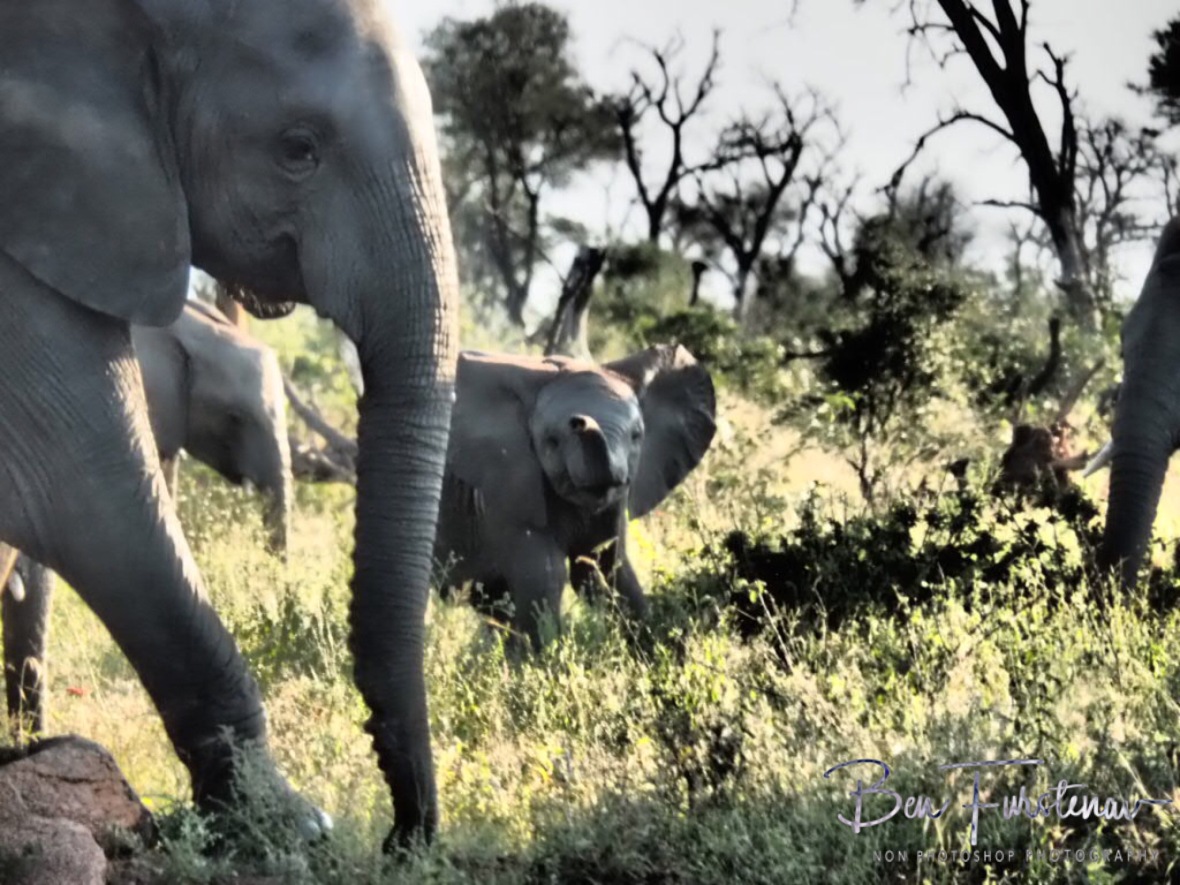 These seemed extremely happy enjoying the last rays of the sun. Something spooked them all over sudden, as the herd came together in defense mode, building a grey fortress around the small. 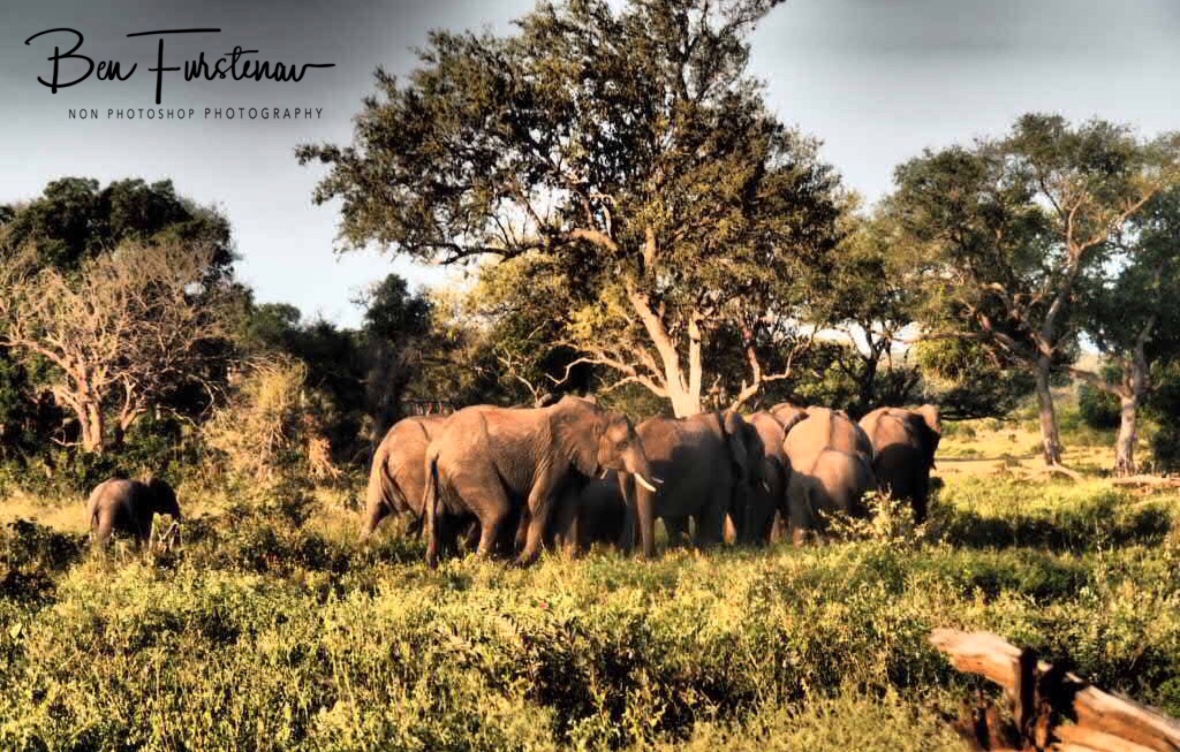 I couldn’t see any danger and drove off, it was getting late again. 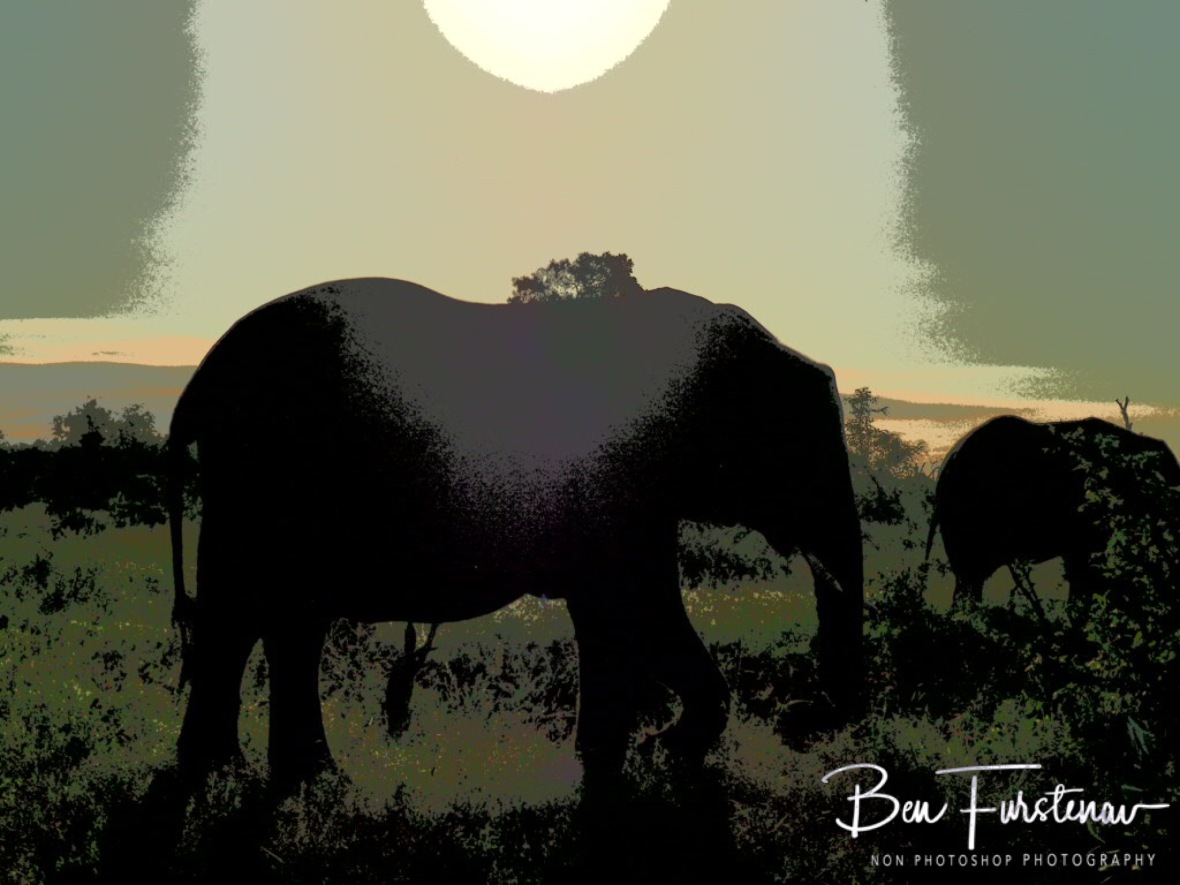 Malelane Satellite(?) camp is a private camp. Small and without shops and reception, it gave me more of a camping in the wild atmosphere. This is my last night and I still haven’t lid the bush TV yet. Nothing better than gazing at the fire under clear skies, a boerwors (typical South African tasty sausage) on the braai and sipping on Gin and Tonic. This keeps mosquitos away I been told. Good enough reason to have another. Cheers.  😉