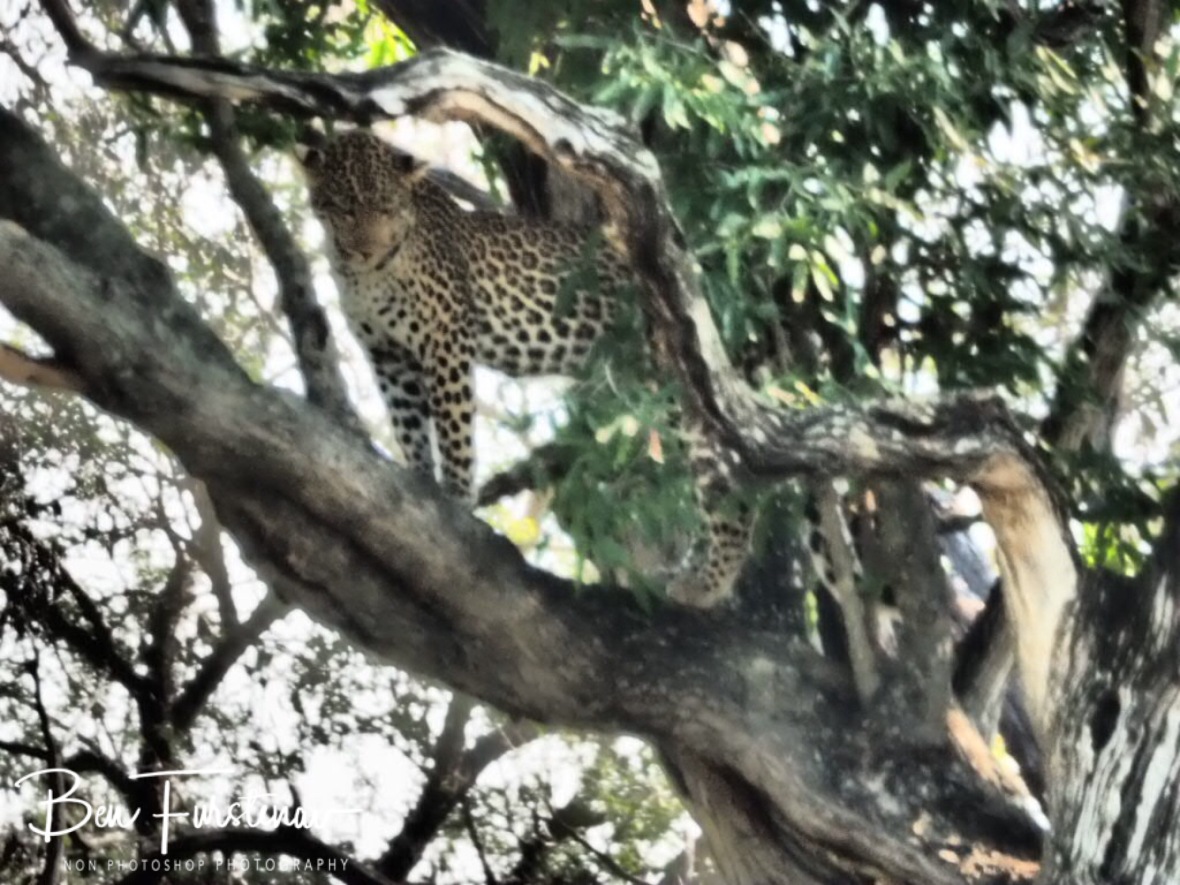 Seeing one of the big cats is high on mine and most other people’s ‘to see list’. A leopard or cheetah would be fantastic, but I would settle for a Lion too. I have seen the even rarer wild dog three times already, no cats. Cats normally like me, maybe I am more of a dog person? My camping neighbour told me he saw a leopard with cub walking the dirt track road not too far from here. Let’s see if I am lucky enough to spot them. I left early to drive Fayi loop drive where the leopards were sighted. 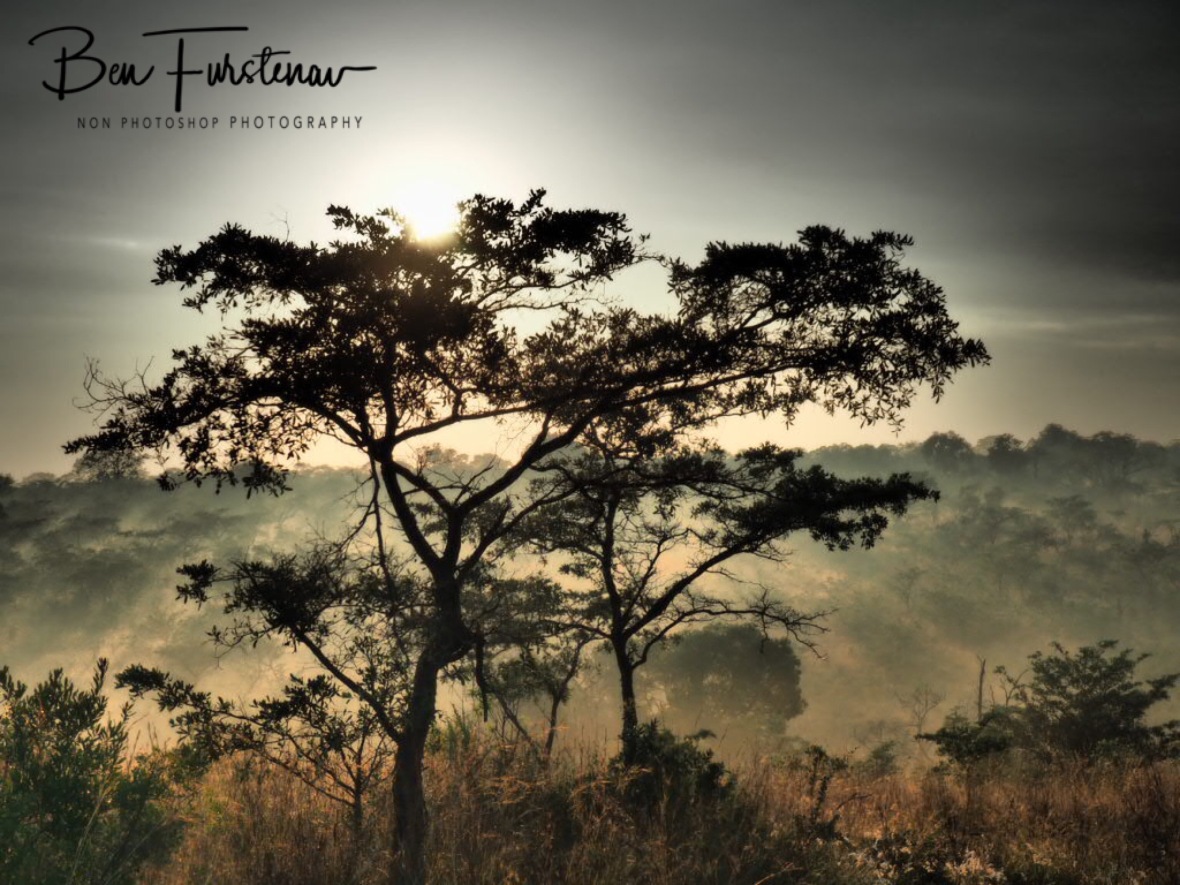 The morning fog was steamed off by the early sun, but no leopards were in sight. 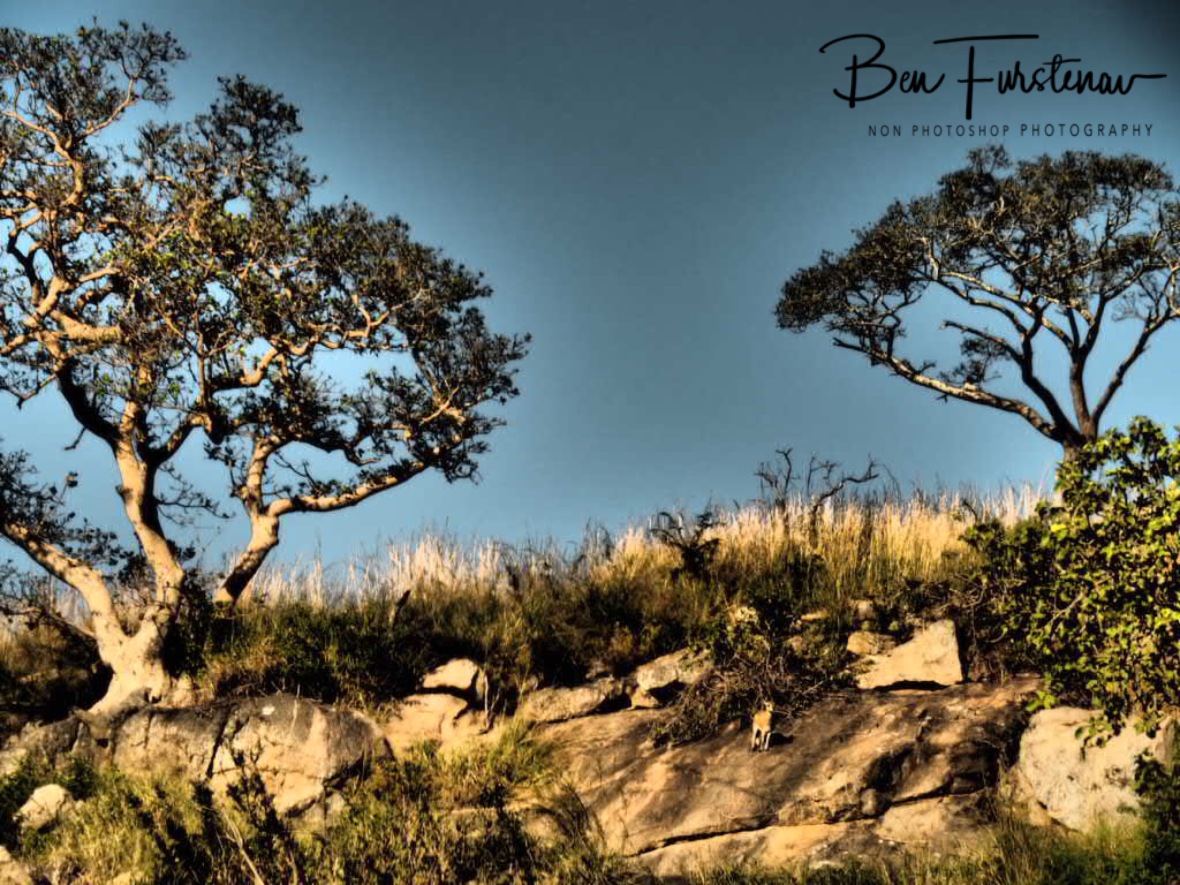 A tiny Klipspringer enjoyed the morning sun, as I was enjoying a nice cuppa coffee. 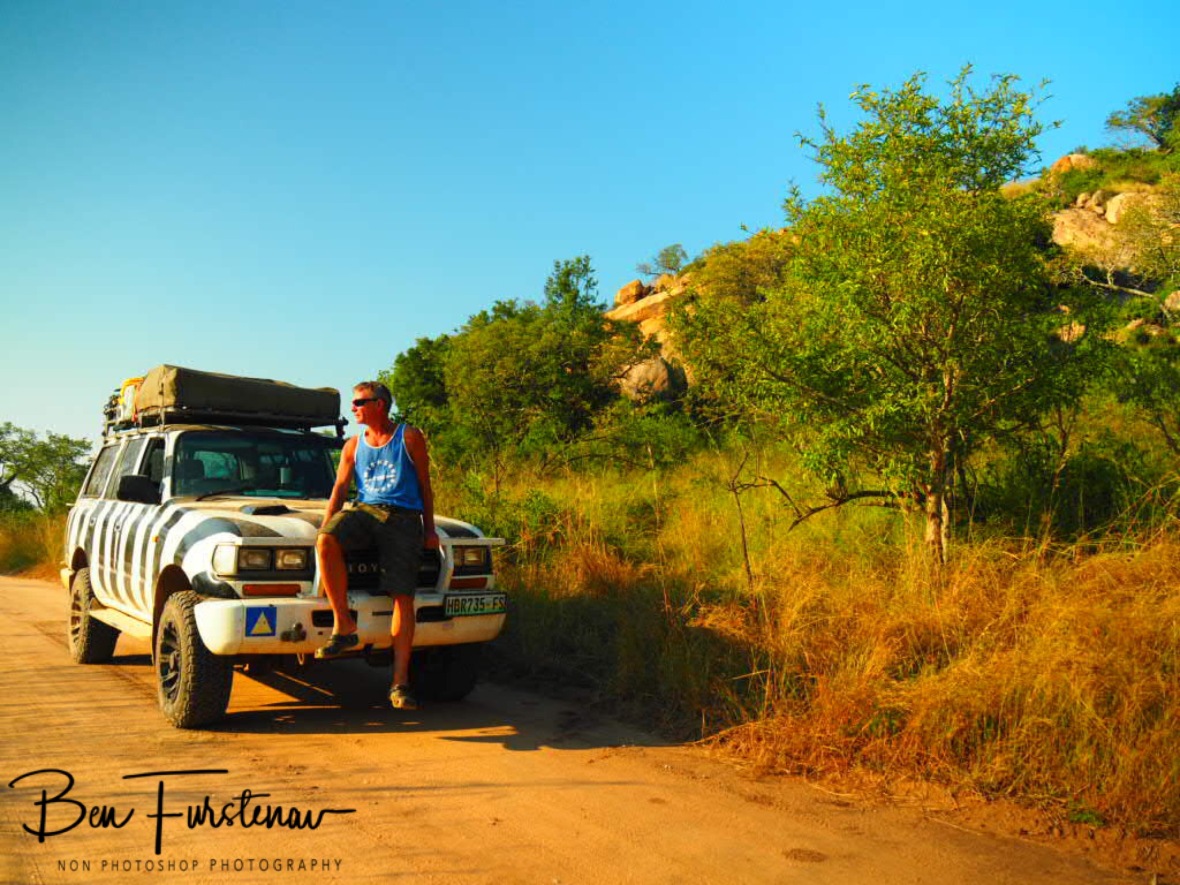 It was nice and quiet up here, bliss. A few giraffes were walking through medium height bush. I could only see the heads moving through the Forrest. Rather bizarre. I drove the loop twice, no sight of this elusive cat. 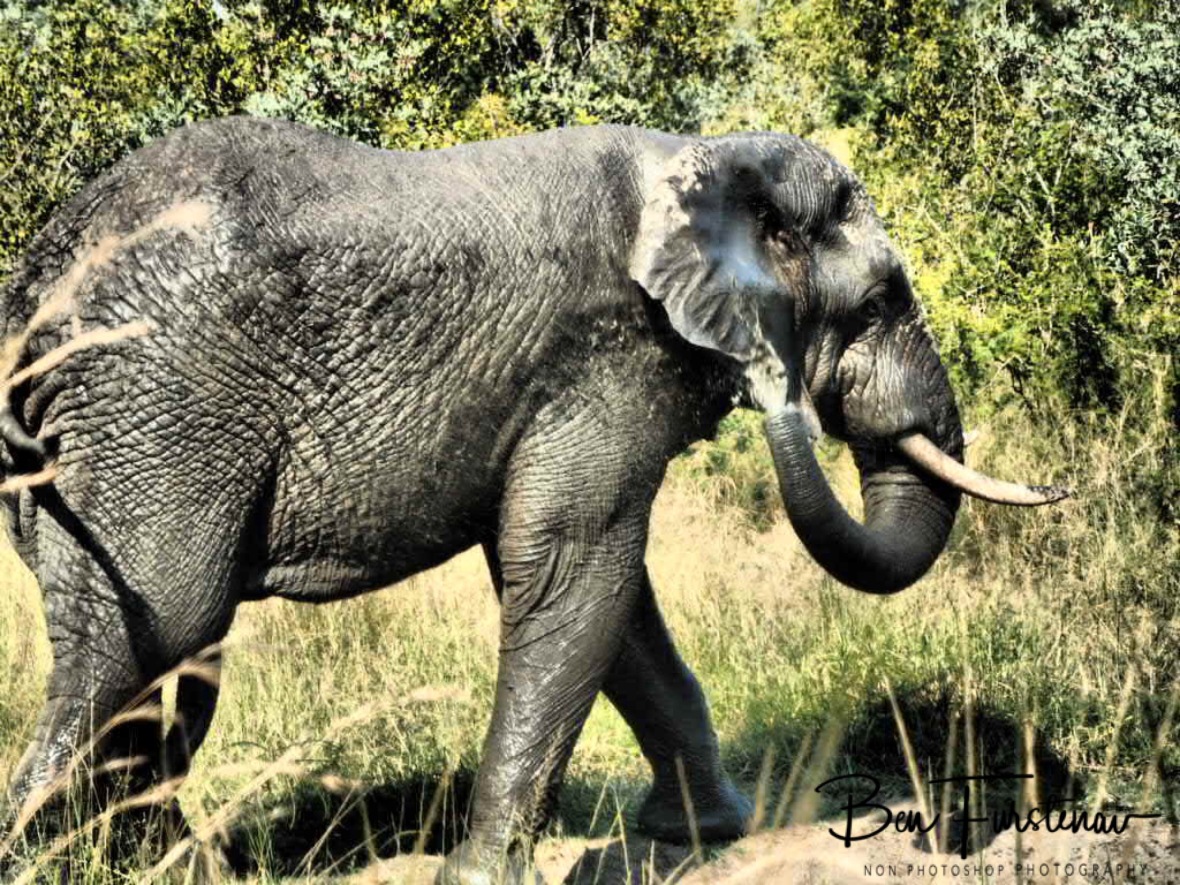 A herd of elephants was enjoying a mud bath, keeping their cool and parasites at bay. Amusing to watch them spraying mud all over their body with their trunk. With a shiny new coat, they walked off. 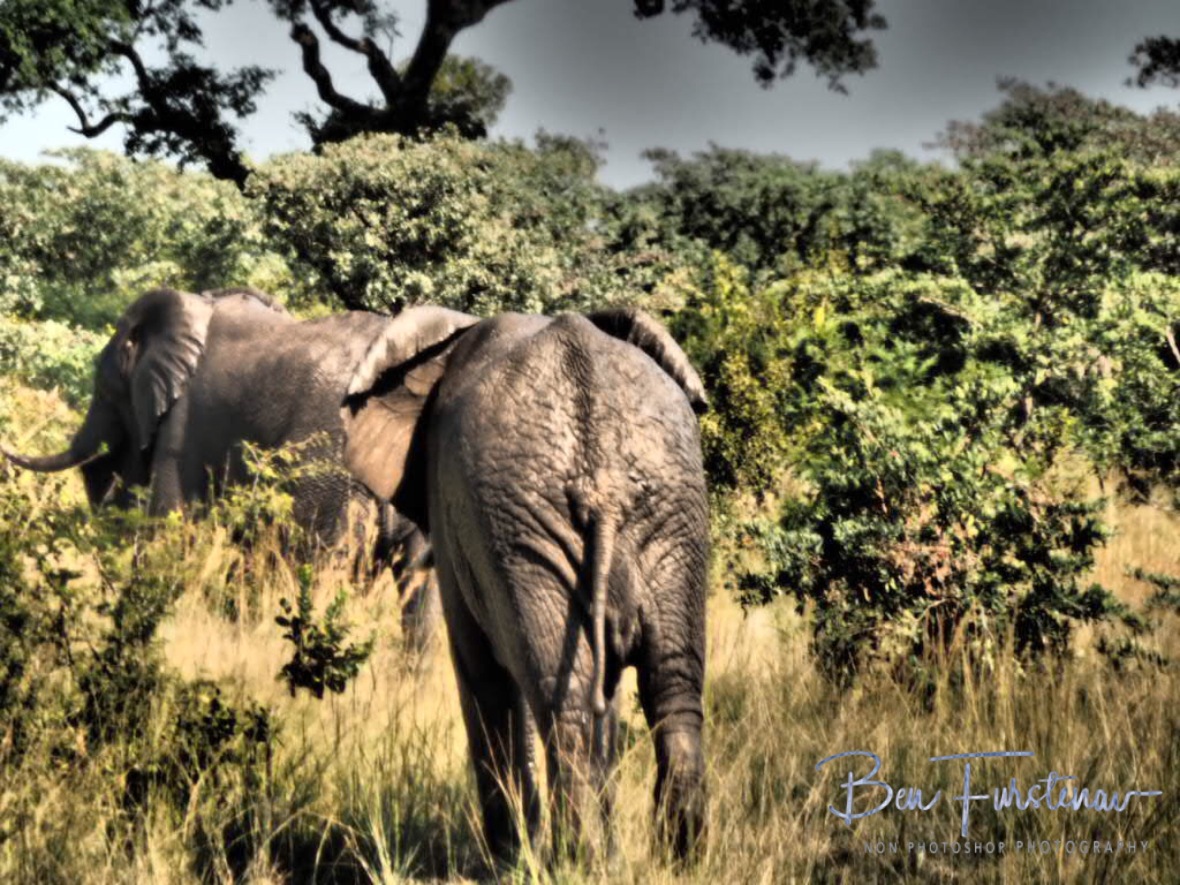 I stopped for coffee at ‘Afsaal’ picnic area, a popular stop it seems. Next to me sat a young South African fellow named Hermann, who looked like a tour guide. But he wasn’t, he said. It didn’t take long before we talked about the ‘usual’ issue. He heard the news yesterday, that a school got burned in protest. When the mob was asked, why they burned the school, they replied that they don’t have enough schools!?!? It is just like the David Letterman show, just in reality. Always something to laugh on the news, he added. The good thing is though, that there is no terrorism here! He said. As soon as the weapons arrive, they will be stolen. This actually makes sense, in a very sad way. I headed inland along a dried river bed. Dust and rocks, no more. But there’s always elephants. 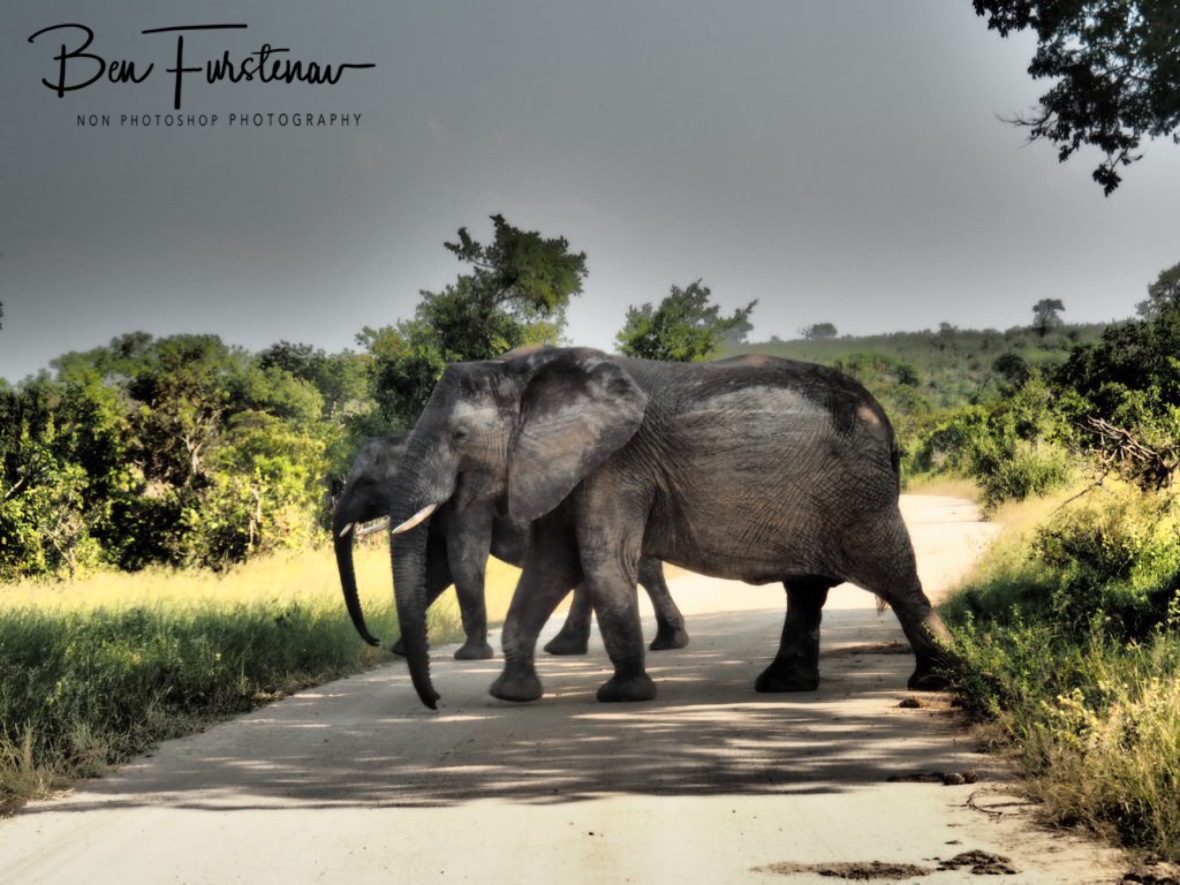 One was right in the middle of a bush next to the road. I didn’t see him, only heard him. I reversed to see what he is doing, which he didn’t like. Blowing his trumpet, flapping ears, a sign to leave. 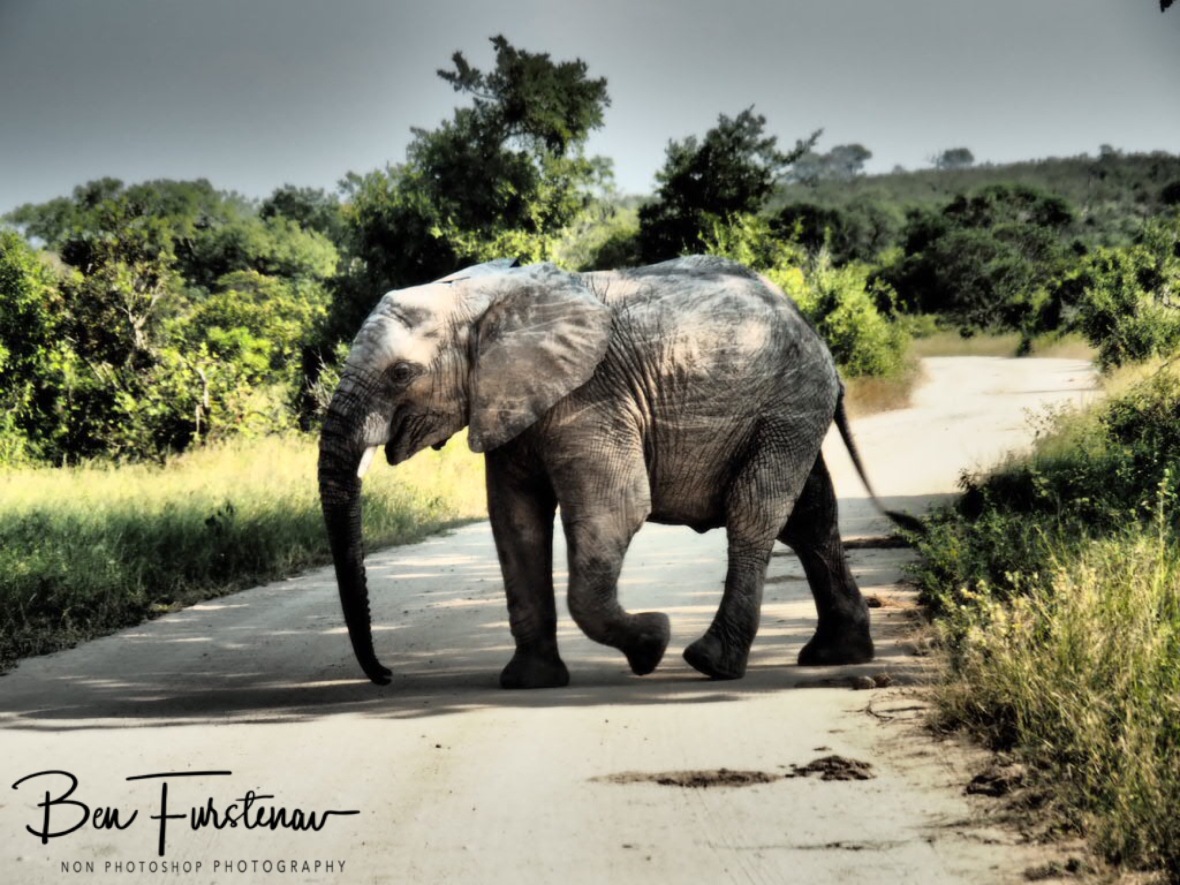 The rest of his herd was better behaved whilst crossing the road.

Giraffes can do that too, looking quite graceful as they cross the road. 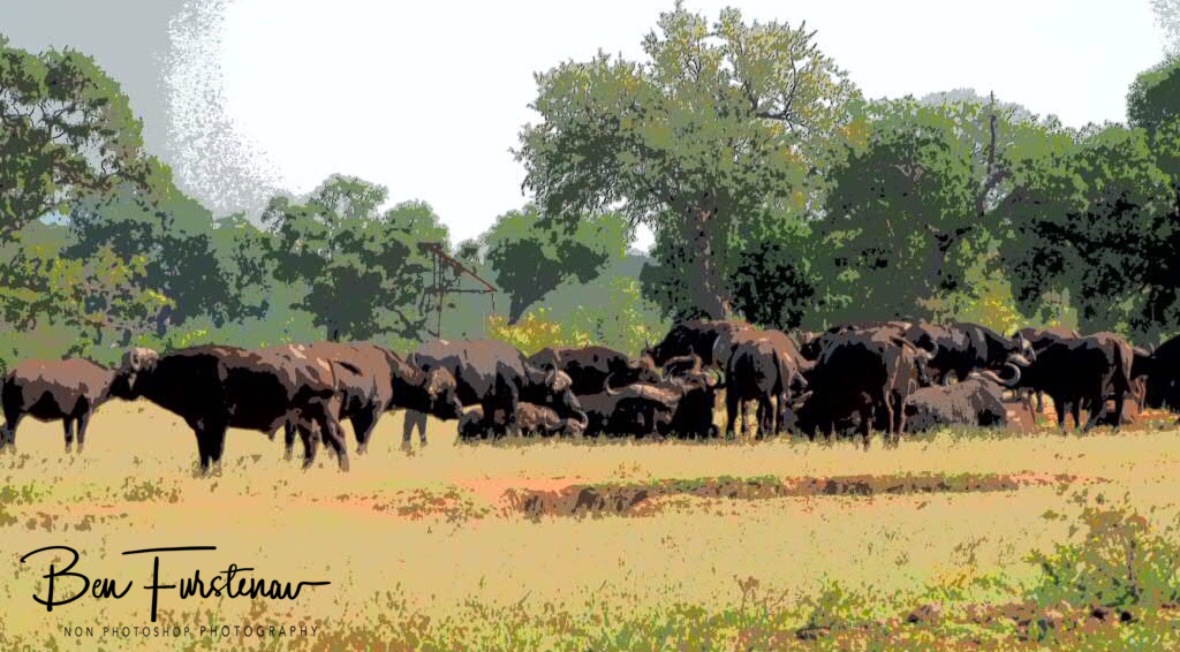 On the other side of the river was a huge herd of buffalo. It was steaming hot meanwhile, even for them. 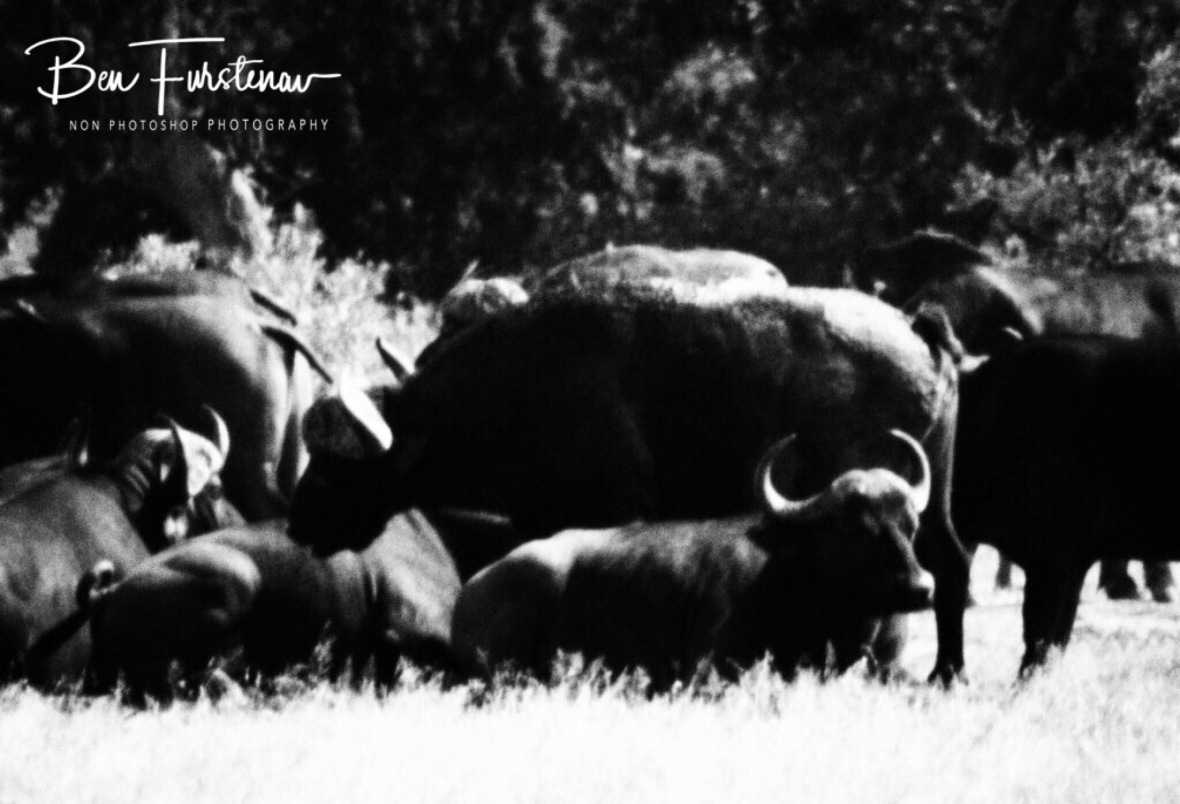 One can see the strength of these huge bulls, using their horns as a bull bar. Imagine that running towards you. 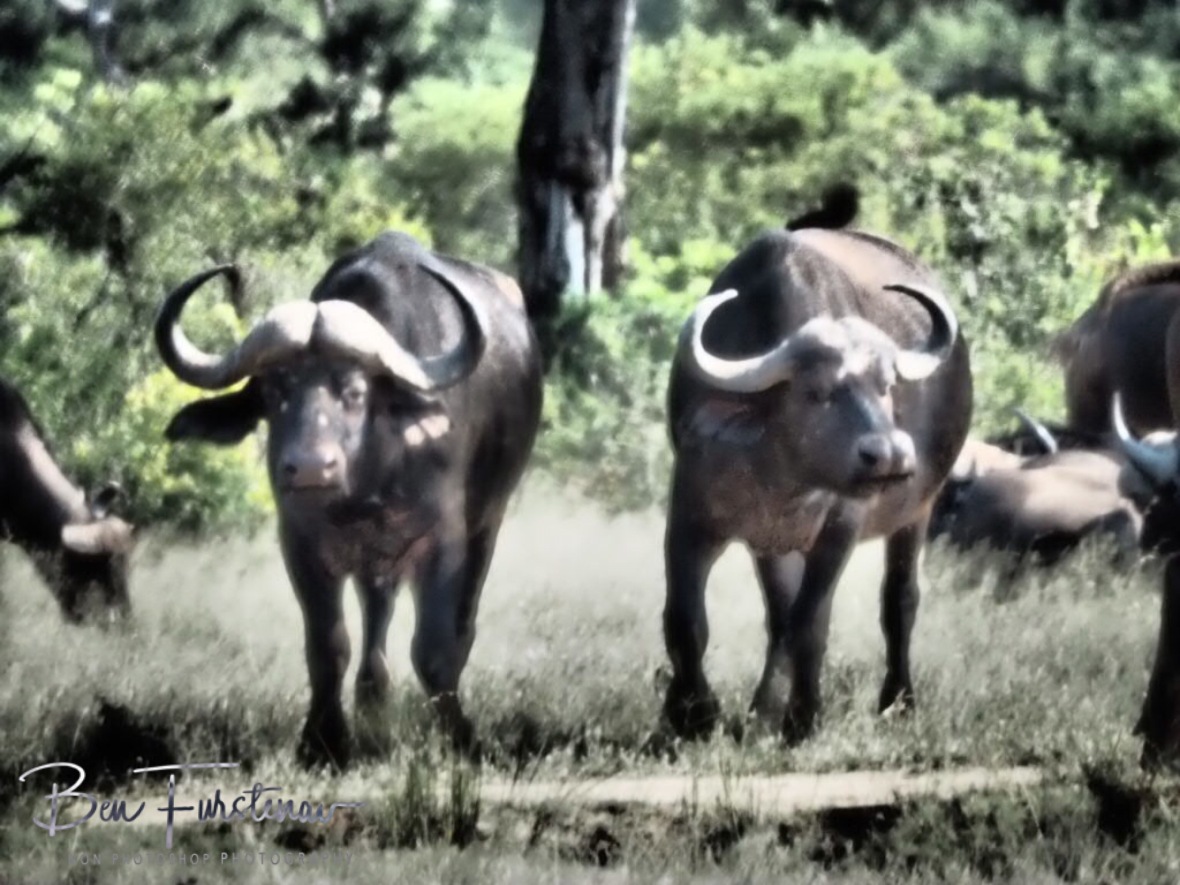 Moving on towards ‘Crocodile river’ rest camp, the grass on the plains got shorter and impala was more frequent. I haven’t seen a big cat yet until I came around the corner. A few cars were positioned on the side of the road already. 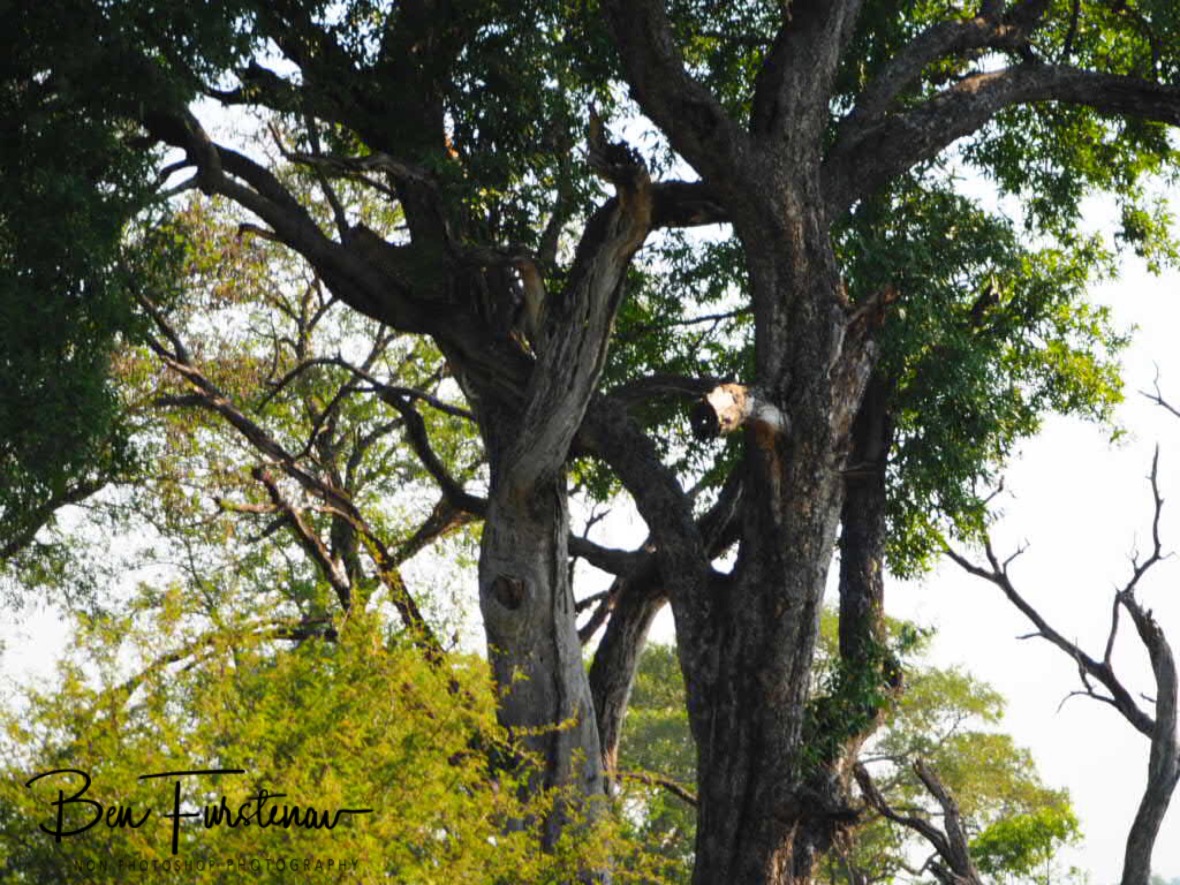 It took me a while to spot the female leopard in the tree having a rest. Without the cars parked I would have clearly missed her. 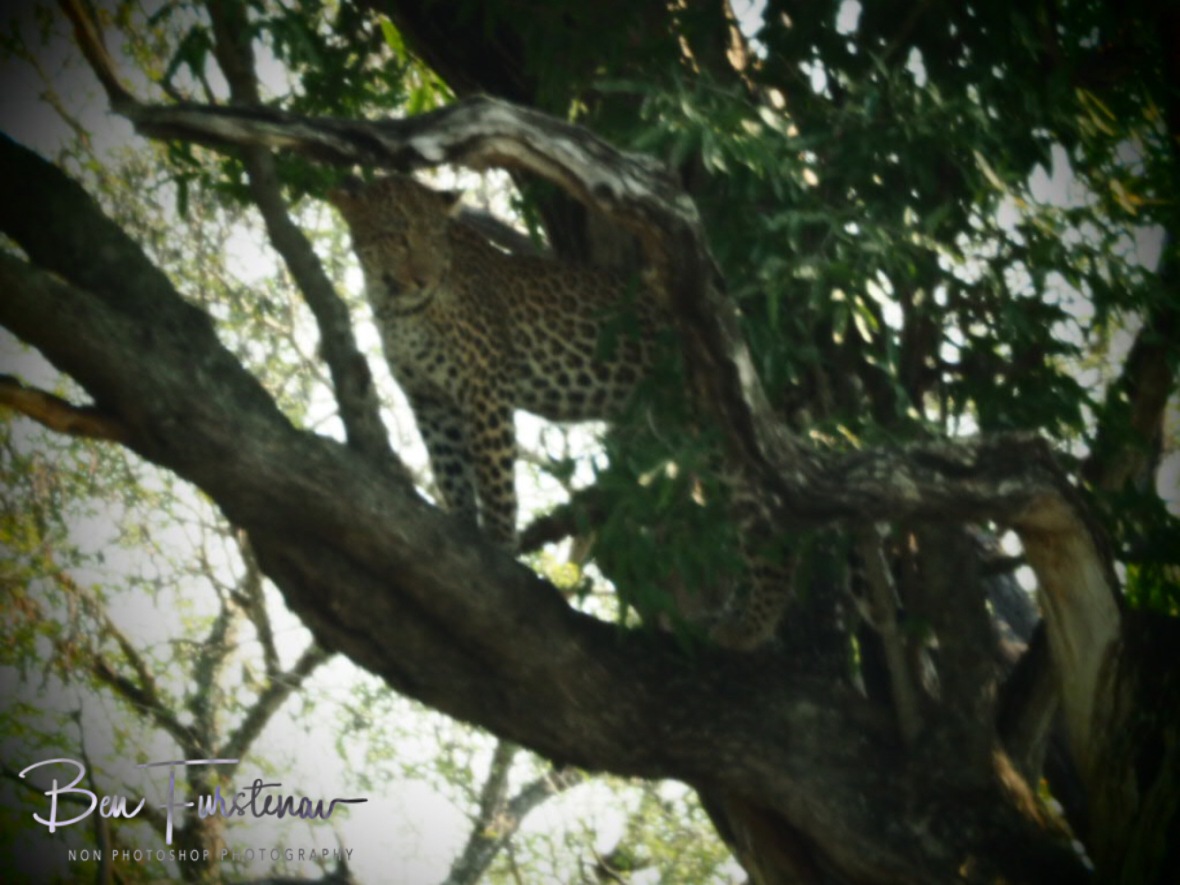 She wasn’t overly bothered about the roadblock she caused. Just lying in the tree. A few impala passed by, which took her interest, but not for long. 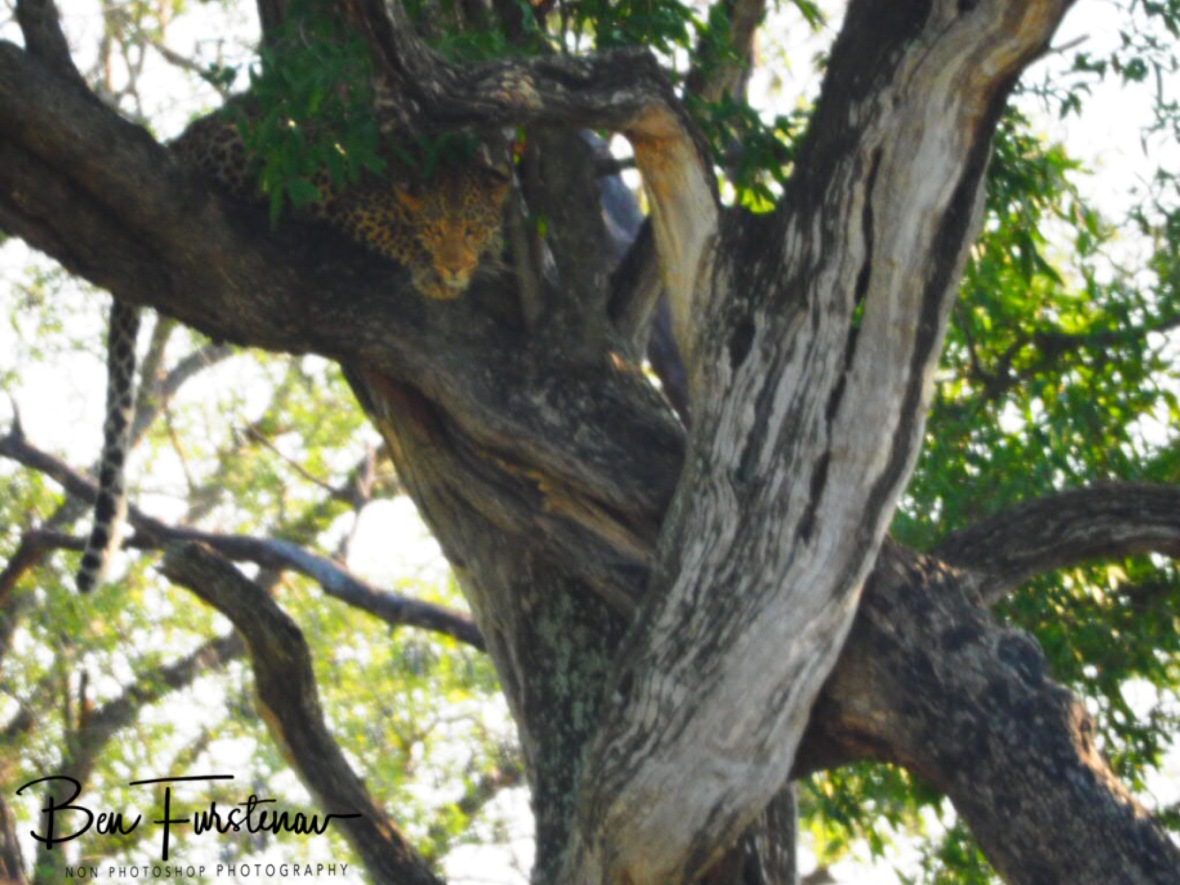 Zimba and I got cooked in the heat for an hour, while she was resting in the shade. Good for her. I finally saw my leopard, happy days. 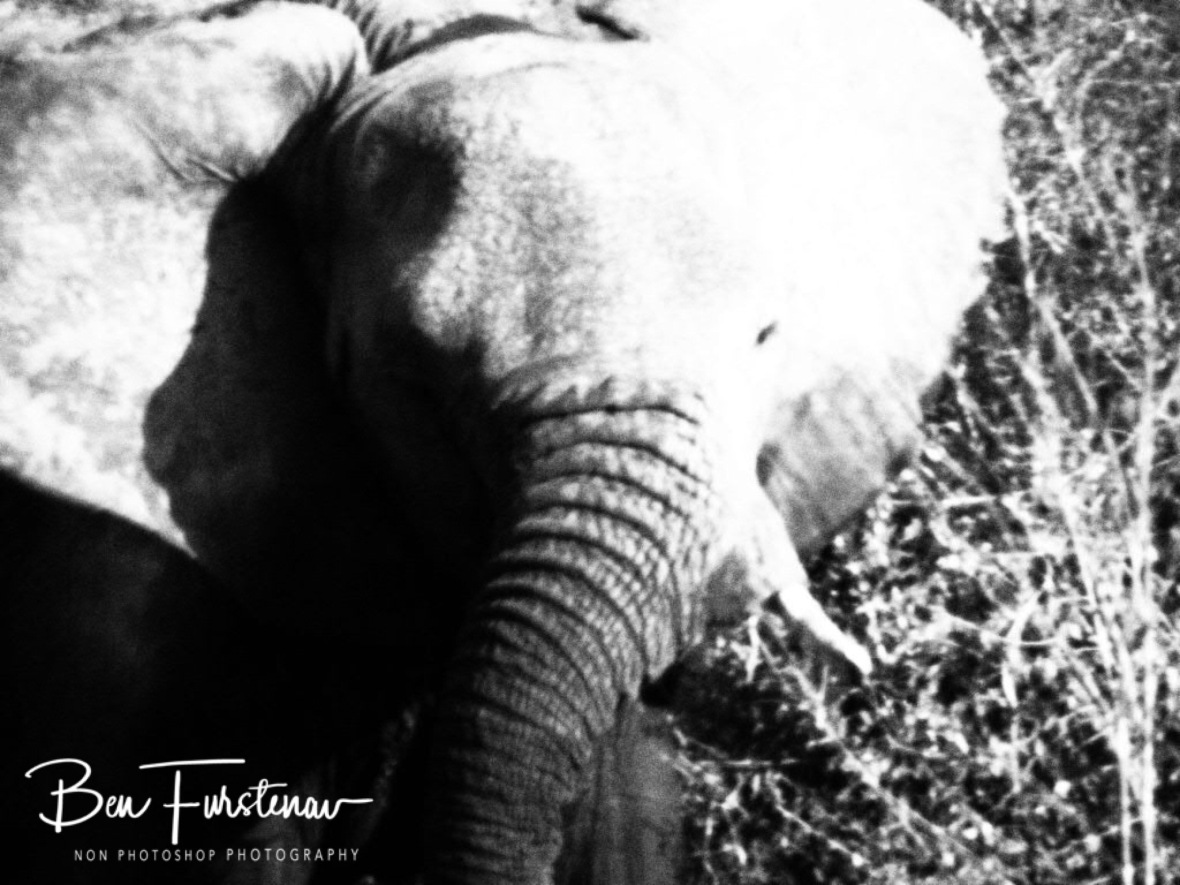 I drove on to the ‘hippo pools’, maybe the hippos were more active. As always, the elephants stole the show. As I descended towards the river, a young female was munching on a bush, while the rest of the herd were crossing the shallow waters. 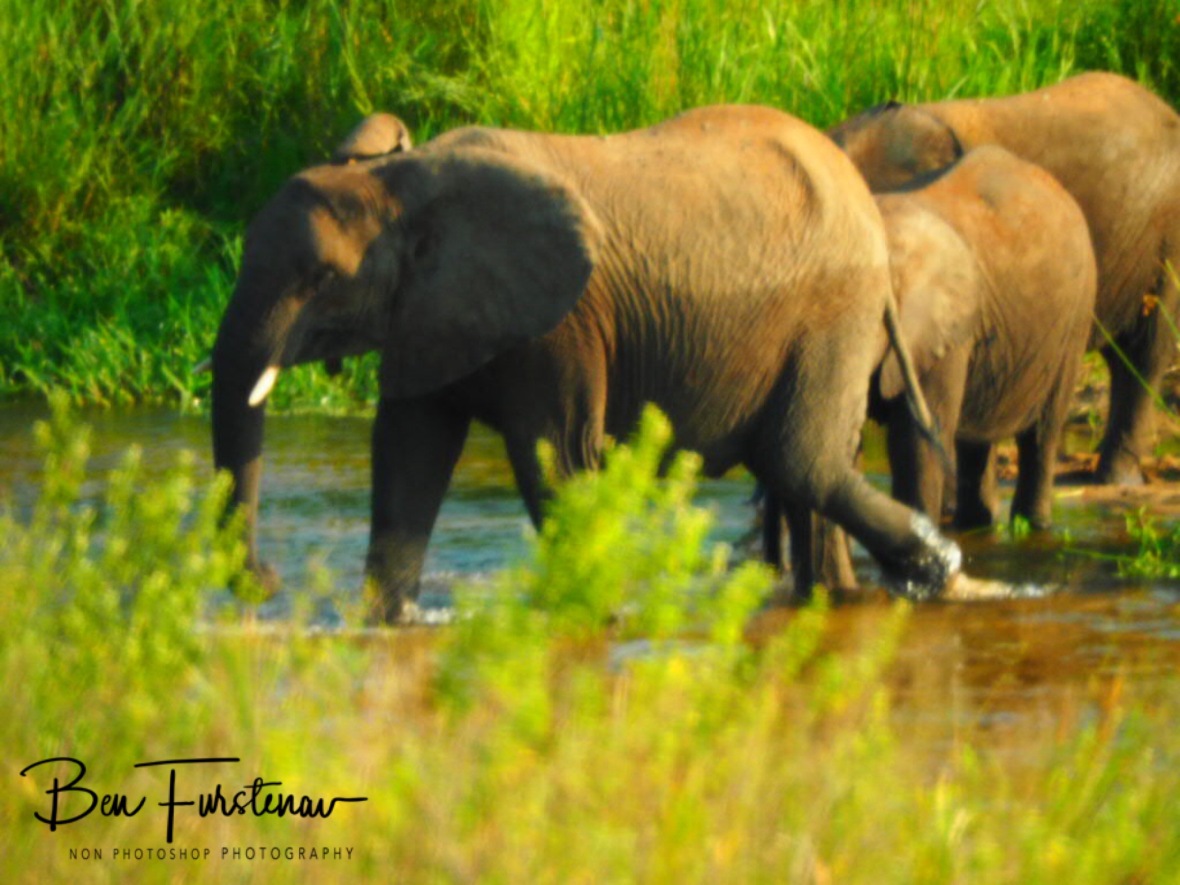 This was a narrow dead-end track and I really didn’t have anywhere to go. I turned the engine off and sat disguised as a zebra. The elephants didn’t have much room to pass. Not liking it, a very little bit too close for comfort. But even more exciting. 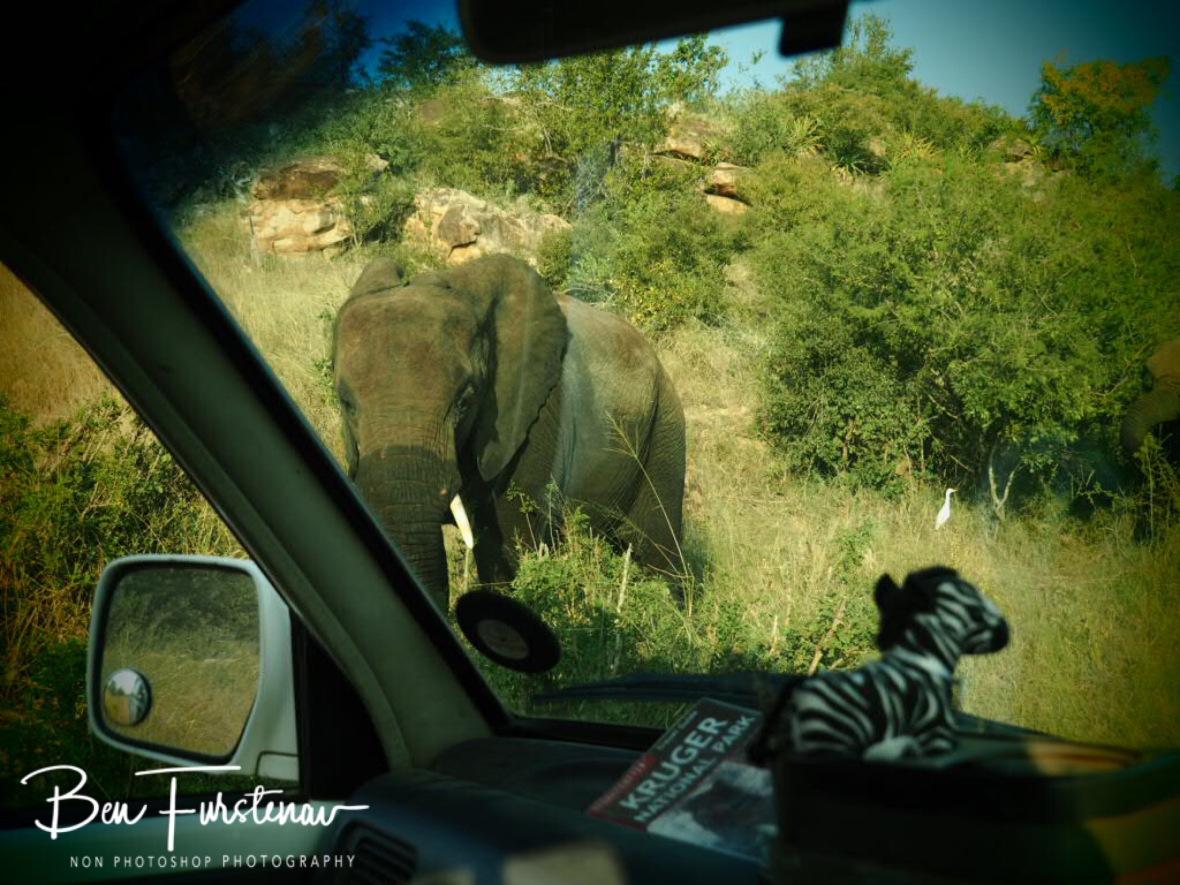 Too close for comfort for Zimba and myself, Kruger National Park

They passed me eventually not more than 2 meters away from Zimba. That sure got my adrenaline pumping. Calm as they were, they couldn’t care less about Zimba and myself. 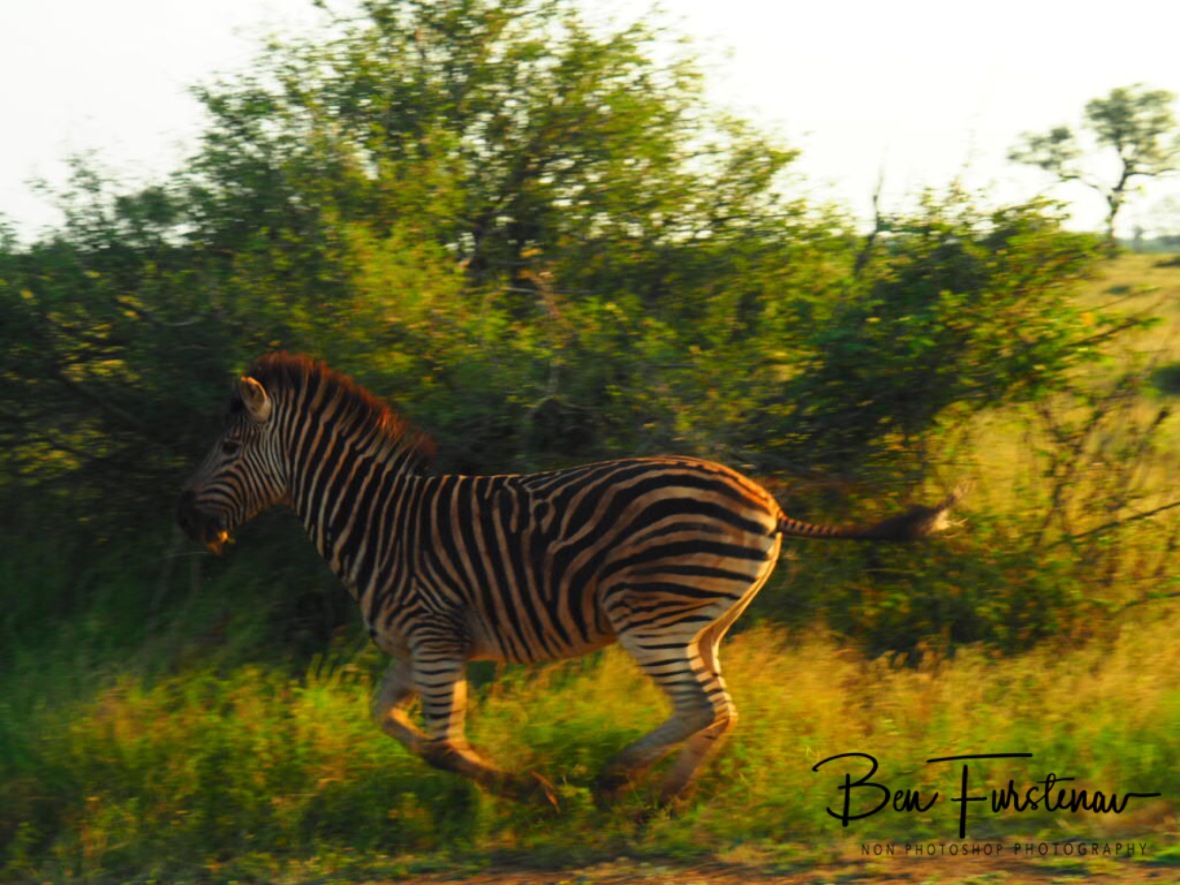 Driving along these western plains is a totally different ballgame. The lower grass opened the view for an abundance of impala and zebra, and most other grazers. 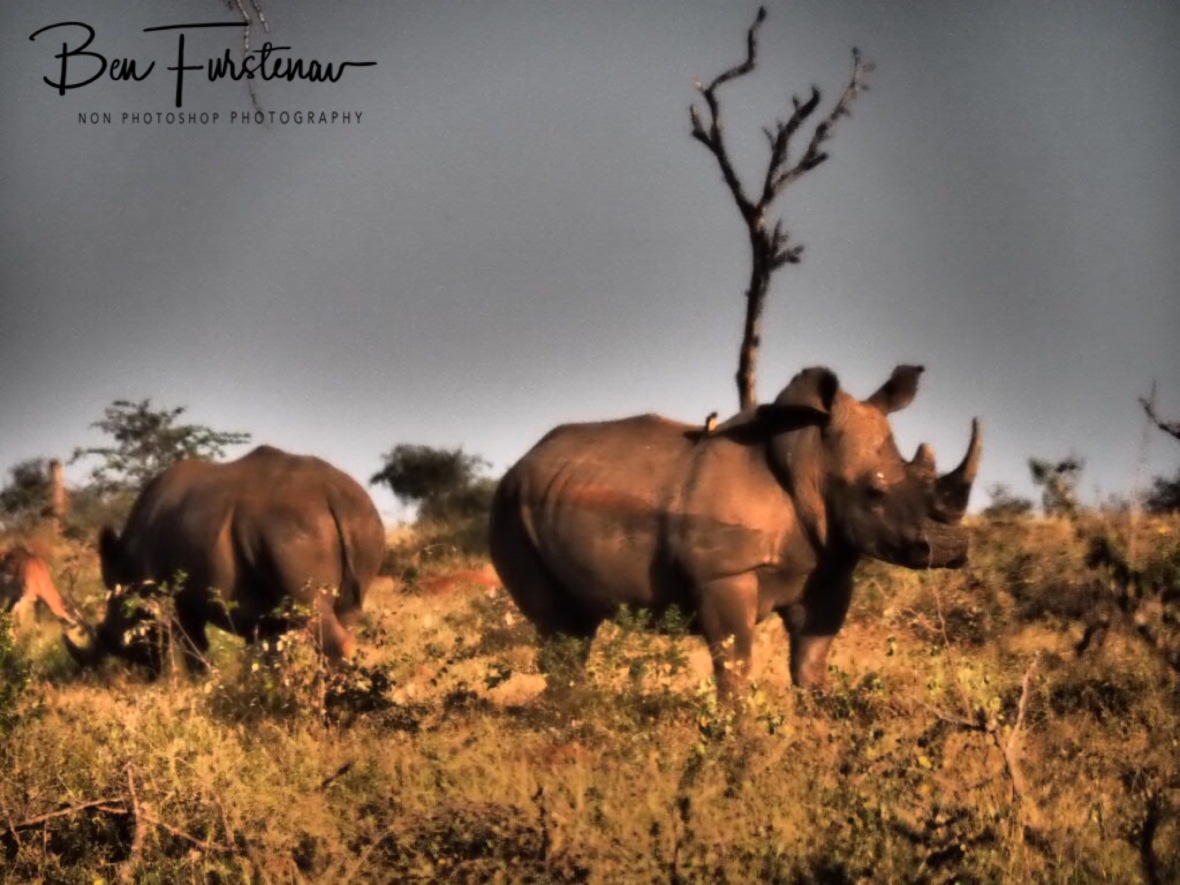 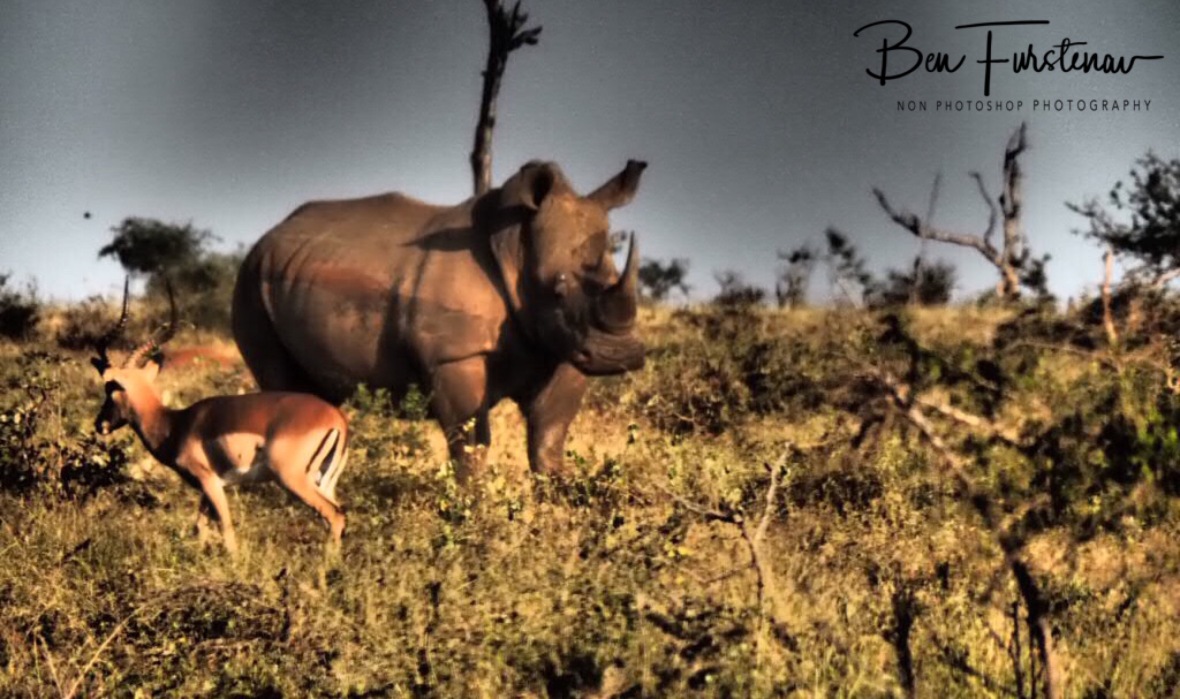 Keeping an eye out for the Impala, Kruger National Park

The open plains gave a great view off the setting sun. 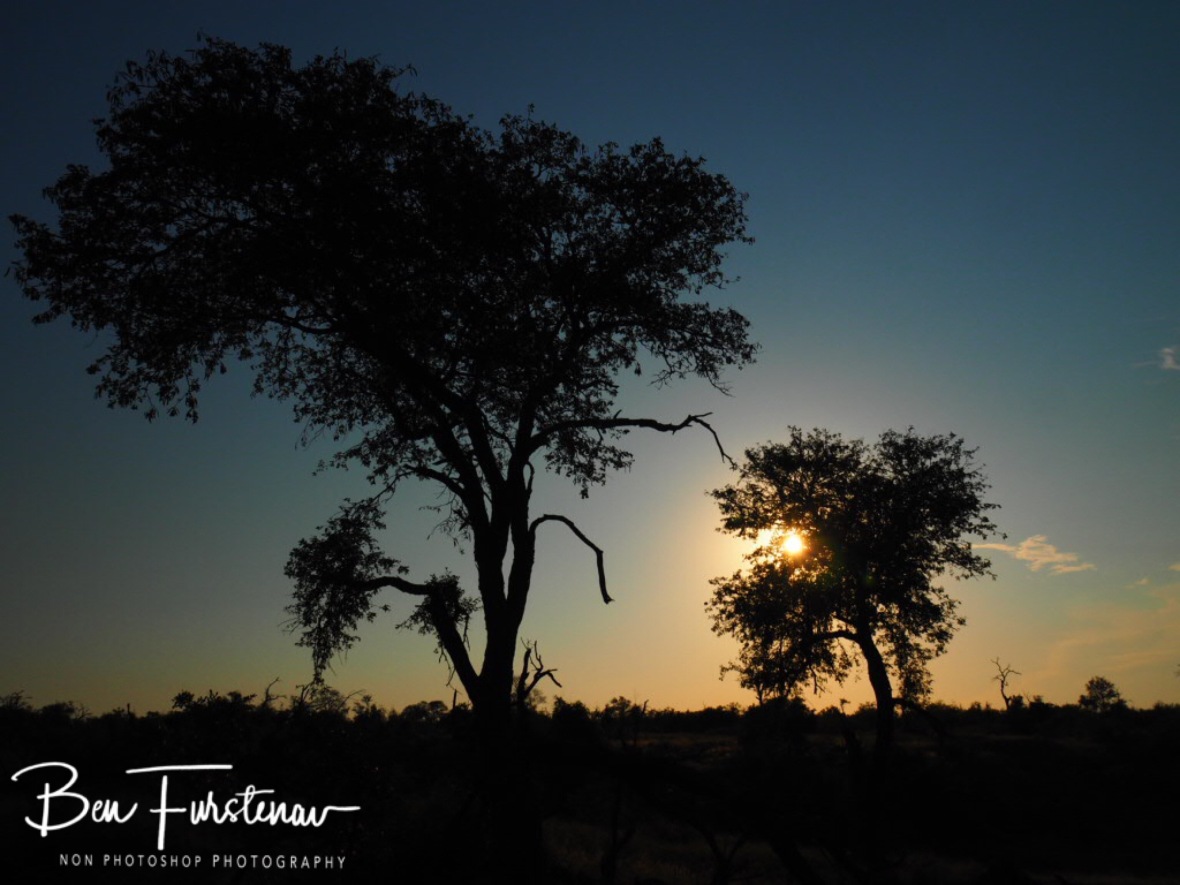 Checking in to ‘Crocodile River Rest camp’ was a different ballgame too. The camp itself was straight ahead and reception to the right. I had to pass a boom gate, patrolled by a well-fed female park warden. She must be earning a lot of money!? After checking in, I presumed I could access the camp area from behind the reception. That wasn’t the case, I had to turn around again and pass the boom gate again. She was busy letting people out of the park in what I would call slow motion.

Meanwhile, the queue getting in to the park had gotten longer. I waited patiently for a good while, no reaction from her. I beeped my horn, which she didn’t like at all, according to her face expression. She moved even slower, now checking the trunks off cars as well. I obviously wasn’t in the good books. That changed quickly when I got my camera out and asked her to smile. Immediately, she ran over to open the gate. The power of a camera still amazes me. 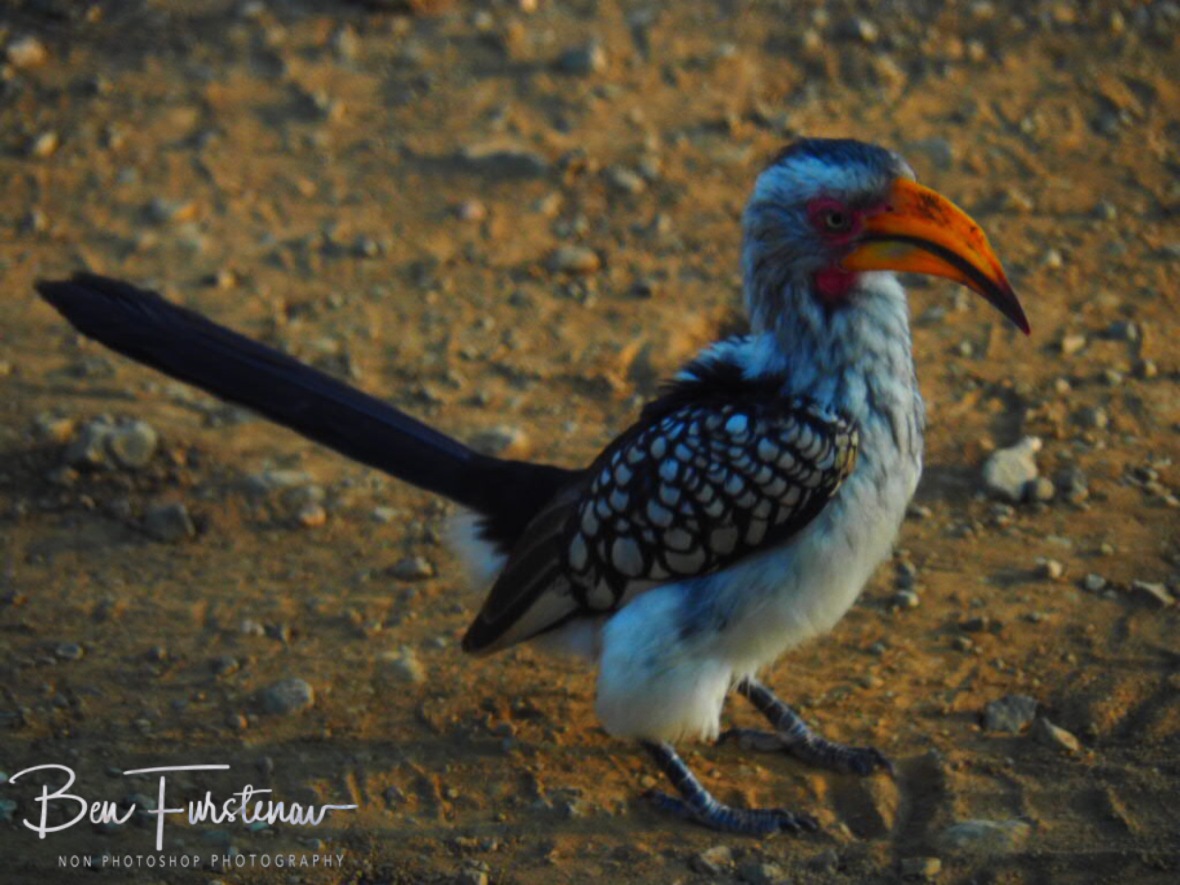 I set up camp with a friendly hornbill visiting, bringing one of his friends as well, a colourful Cuckal. 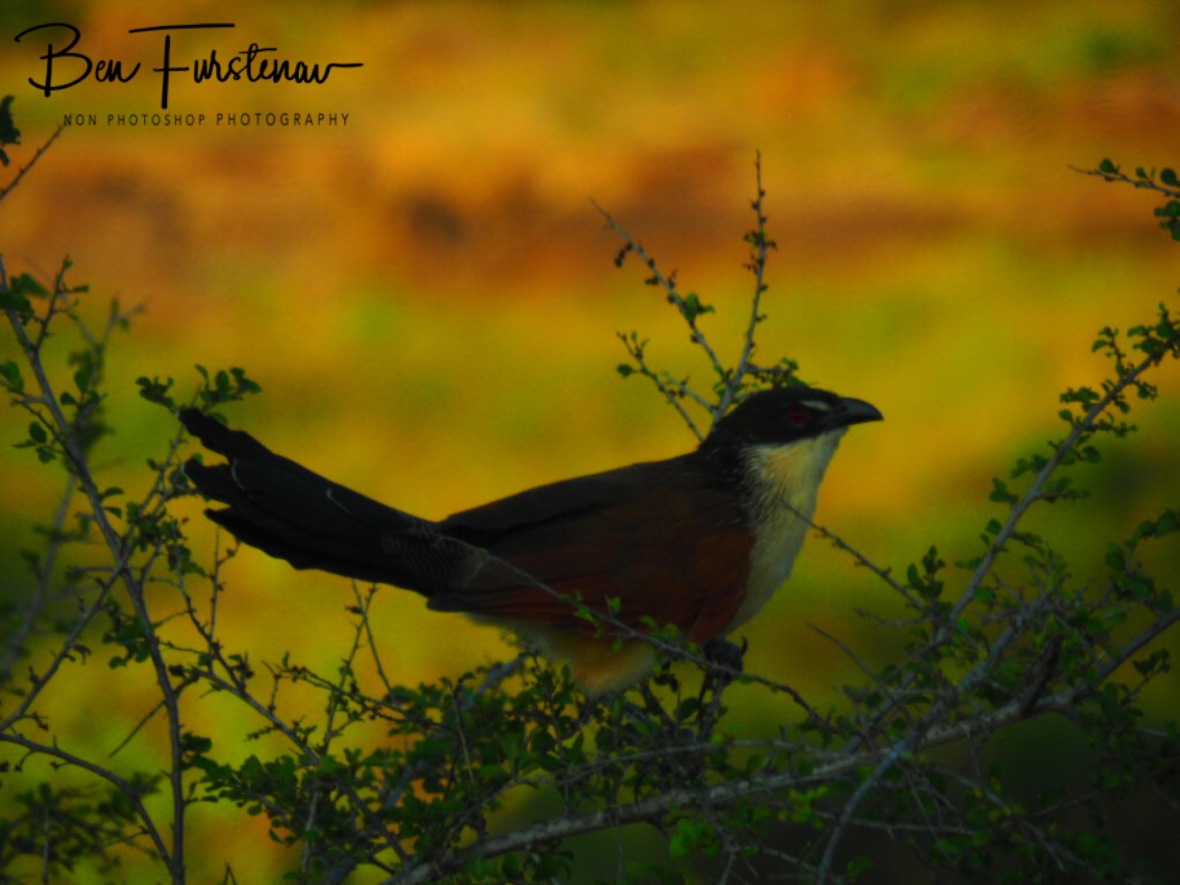 Lightning and thunder appeared on the horizon and brought eventually rain.

I just love the smell of rain.