Life revolves around the ocean in all towns and communities by the sea. Just like in Vilankulo, where it is even more obvious.

Fishing is a major activity, whether for food or to sell at the plentiful markets in town. Not only for the locals but for tourists, who arrive to chase the elusive Marlin, Spanish Mackerel or Coral Trout.

The locals got the short end of the straw, chasing what they can. 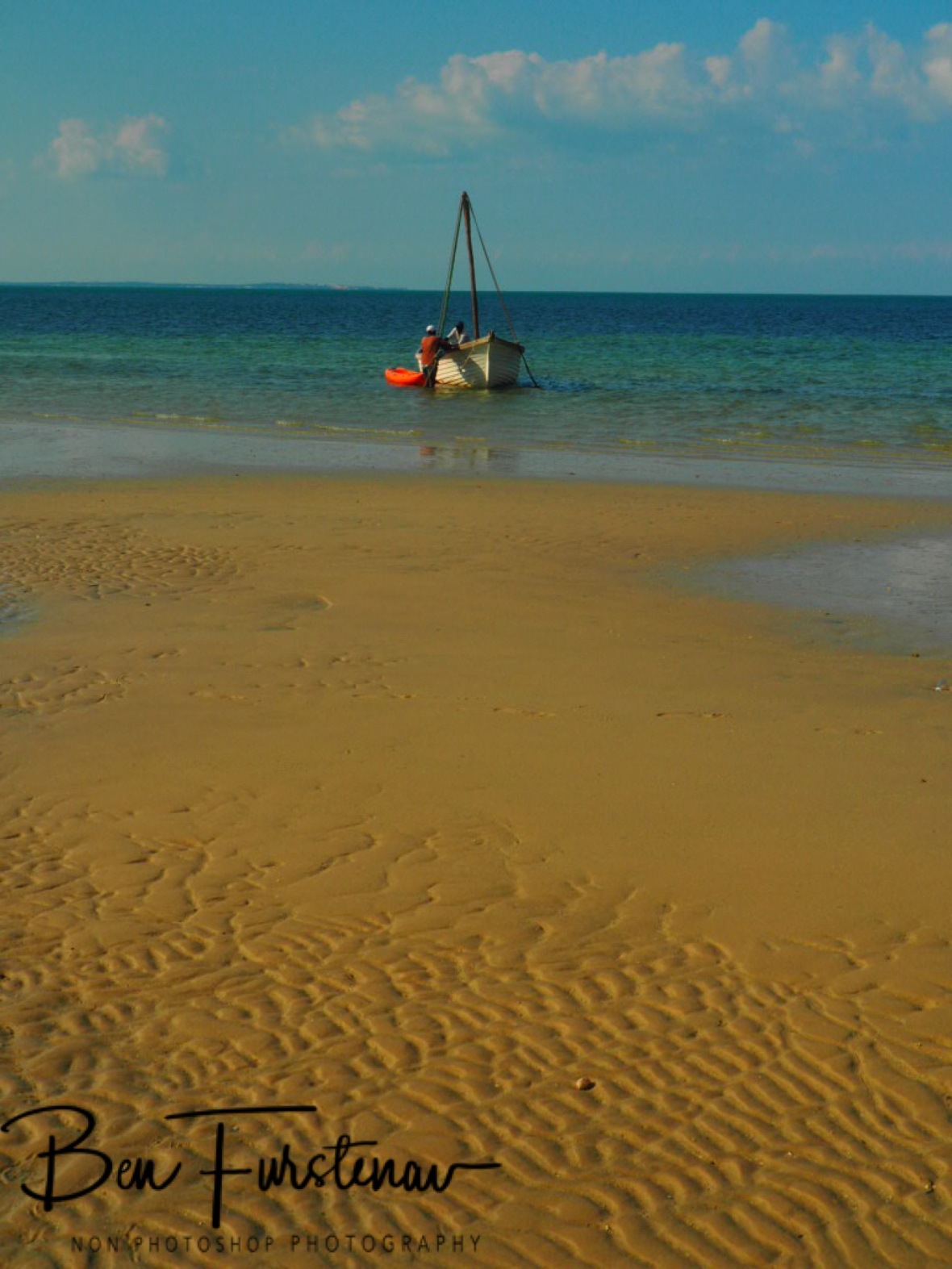 When I first arrived in Vilankulo, I went straight to the oceanfront, to see what is happening and getting my first glimpse of the Bazaruto Archipelago islands. 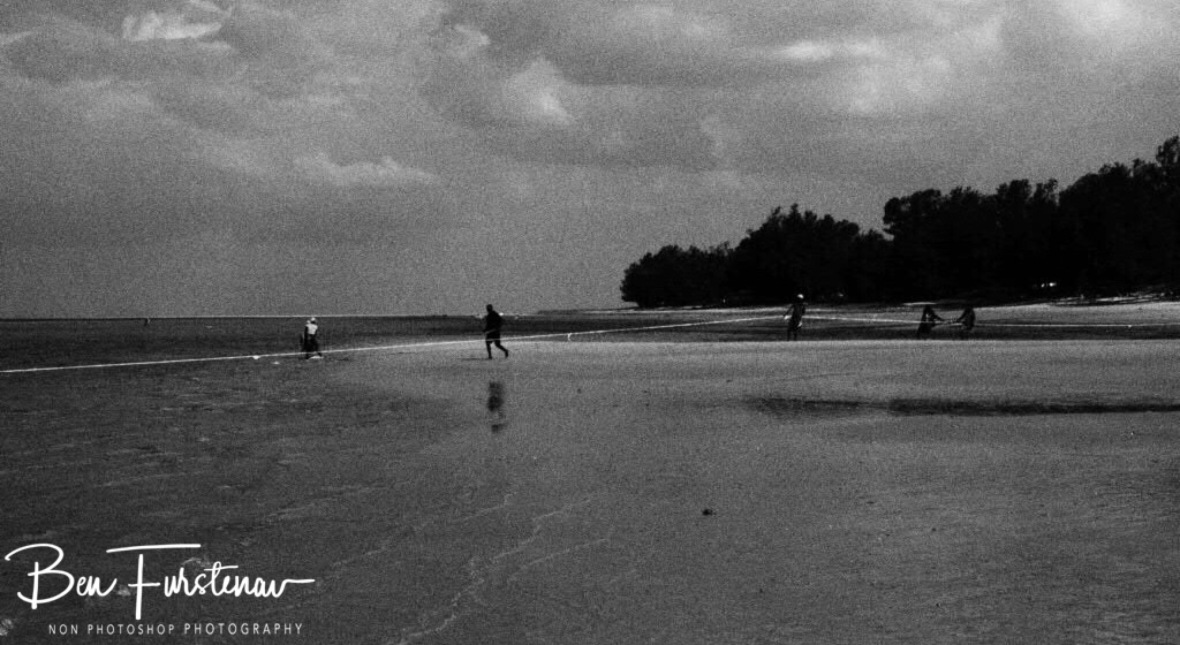 It was hard to miss the handful of locals, pulling a massive rope in from the tidal bay.

A local friendly Rastaman by the name of Abu started chatting and explaining. The net is about 45 meters in length and tied to a rope up to 2 km’s in length on each side. 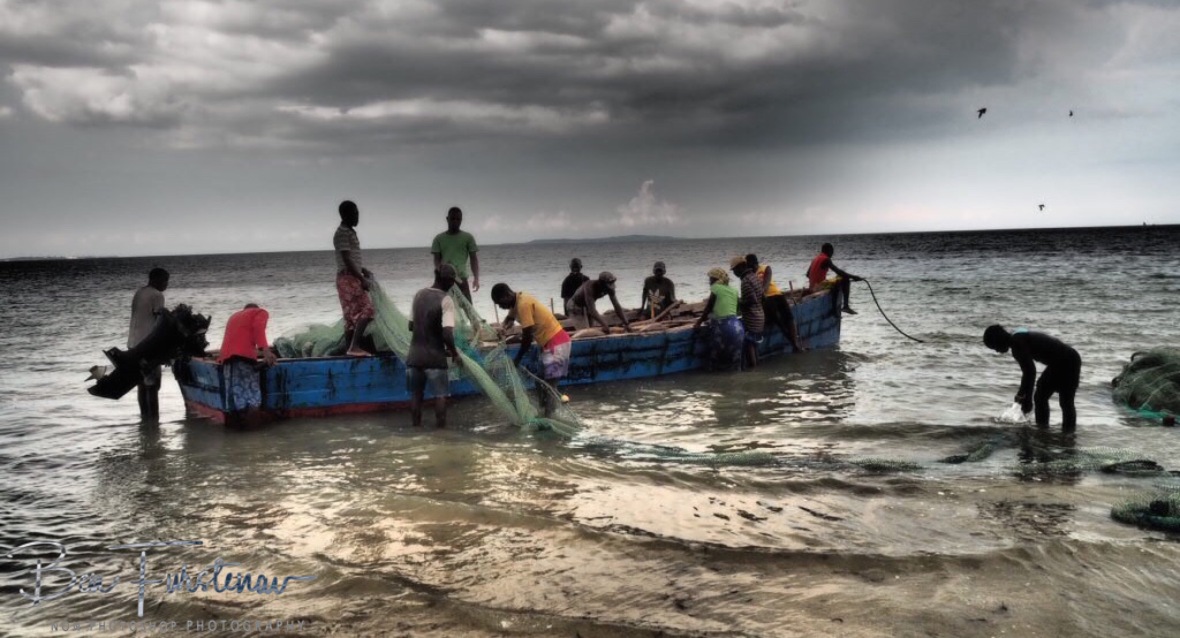 Ready for the next release, Vilankulo, Mozambique

A fishing boat drags the net out into the bay, circling back to the shore.

The net then gets pulled in by a handful of locals on each end, circling tighter and tighter, until they meet and pull in the remainder of the net. 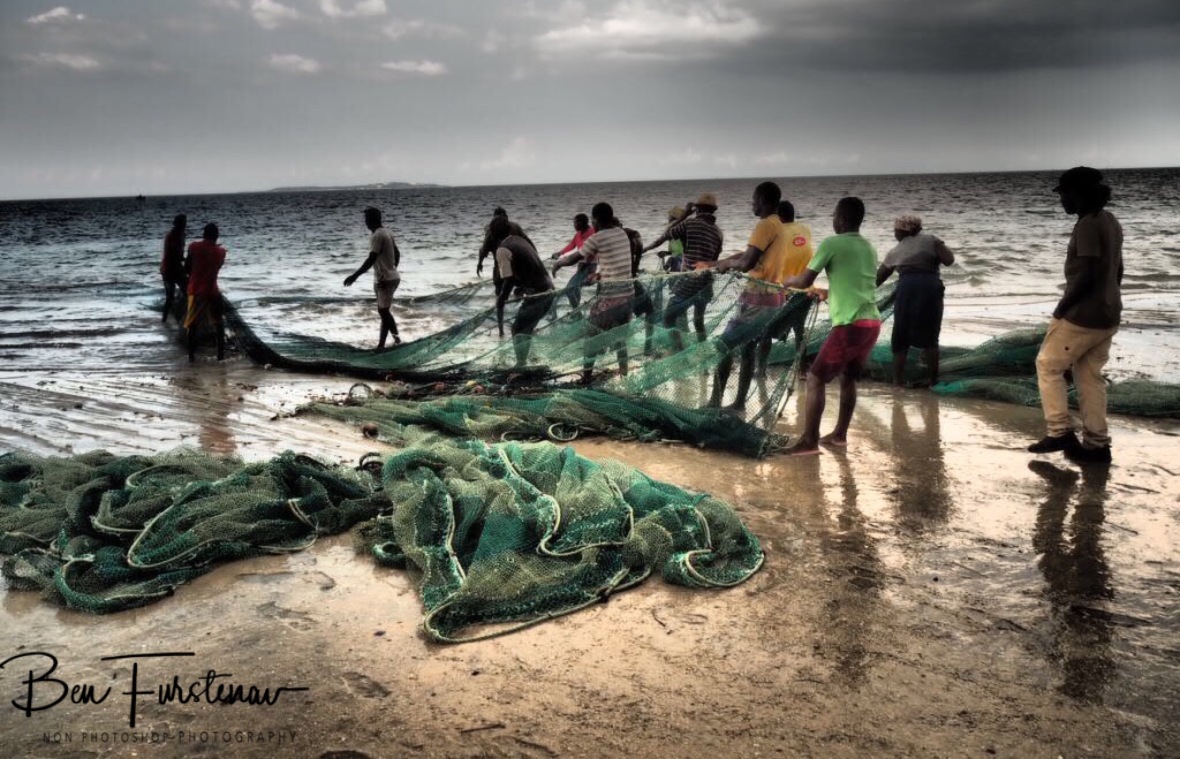 The catch itself is rather dismal in quantity, quality and size of fish. 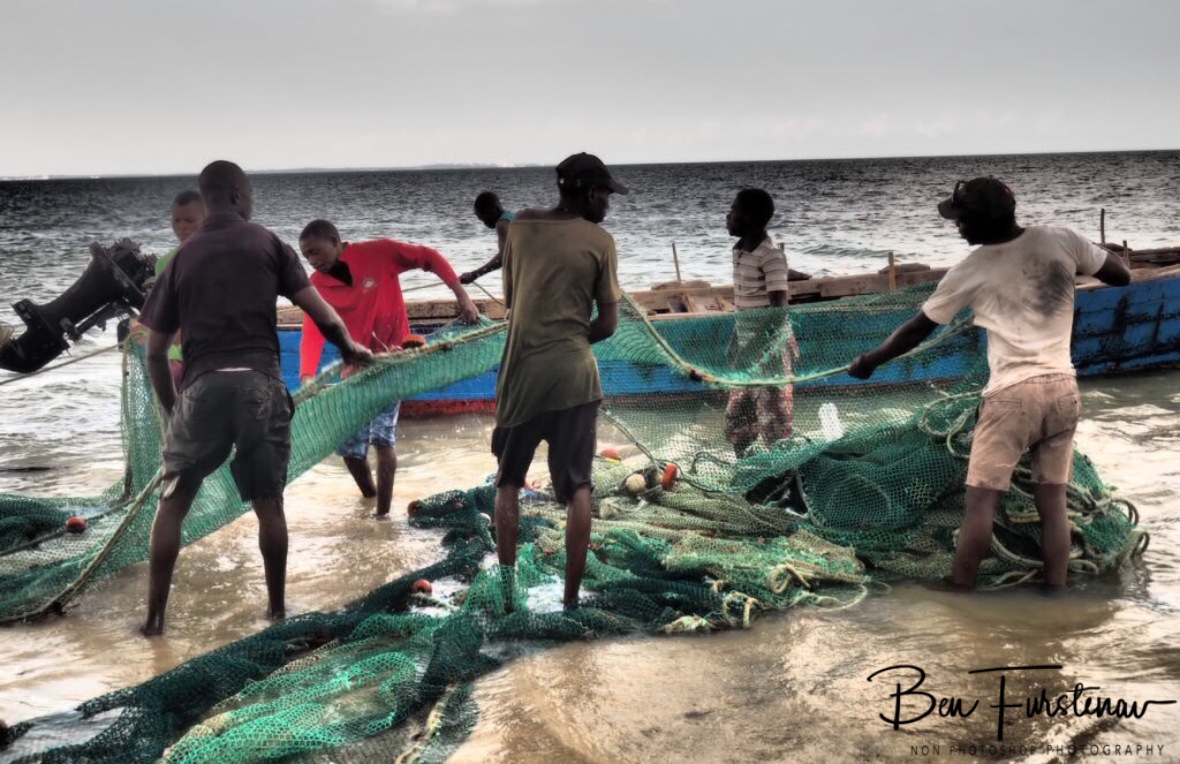 Not much fish, Vilankulo, Mozambique

It then gets divided into equal shares and mostly sold on markets for about 100 Meticais per kilo, just over 2$ Australian.

Plenty of dhows line the beachfront, for those who sail out to catch larger sized fish. 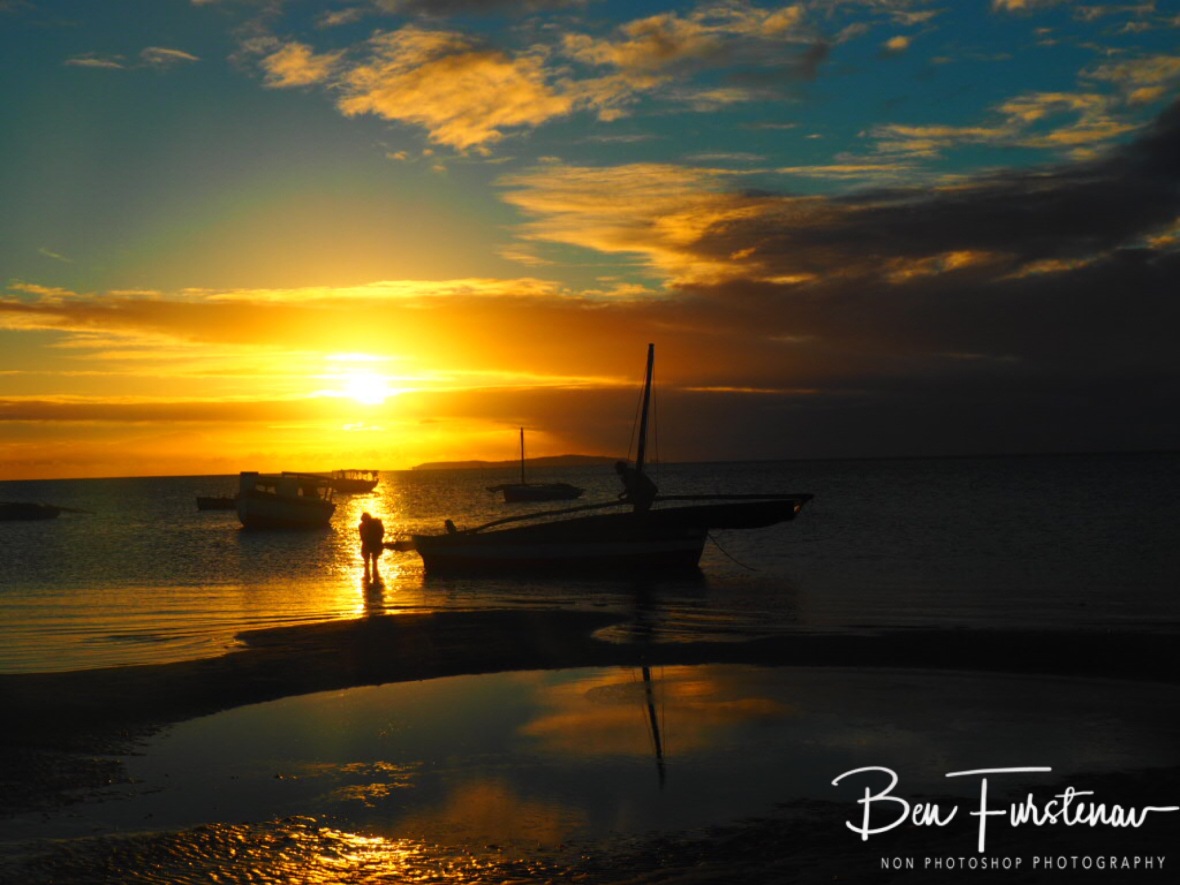 As usual, I was up at 5:00 am to witness another colourful sunrise in peace and tranquility.

A ‘small’ Baobab tree lined the shore at Baobab Beach Backpackers, as well as palm trees and more dhows. Add sun and water to the picture, just magic.

My visit to Bazaruto island was delayed by strong winds and large swell. I made the most of an unplanned day to explore the area. The main market was bustling with vendors, desperately trying to sell their product, ranging from fruit and vegetables and clothing to any plastic or electronic device, imported from our Chinese friends. From the Northern end of town, I wandered along the quieter beachfront, which is more appealing. 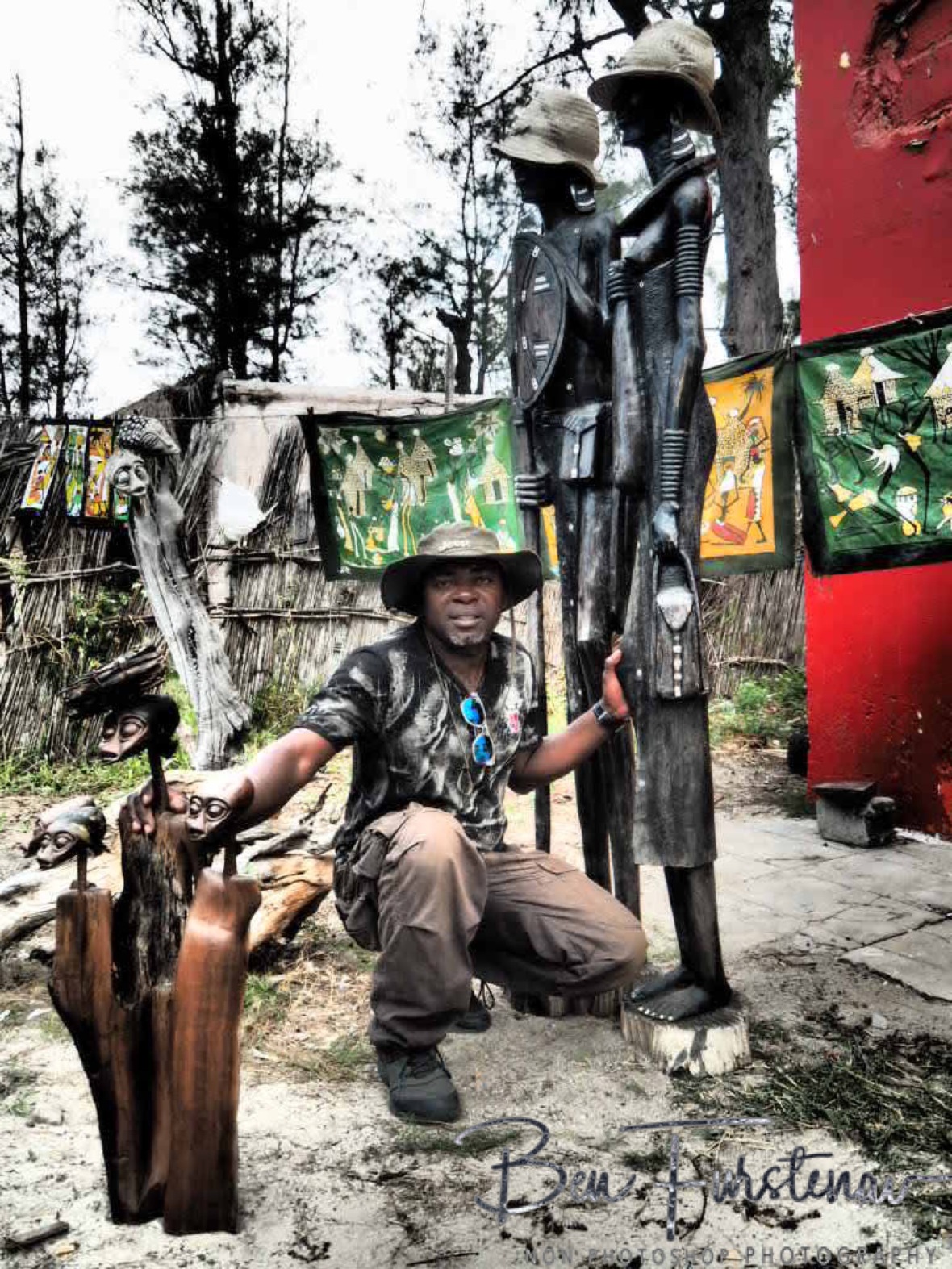 There were some vendors, just as desperate, but not as pushy. A woodcarver called me over to see his collection. Some interesting arty carvings, but nothing I would be able to carry with me and definitely won’t get through Australian customs. 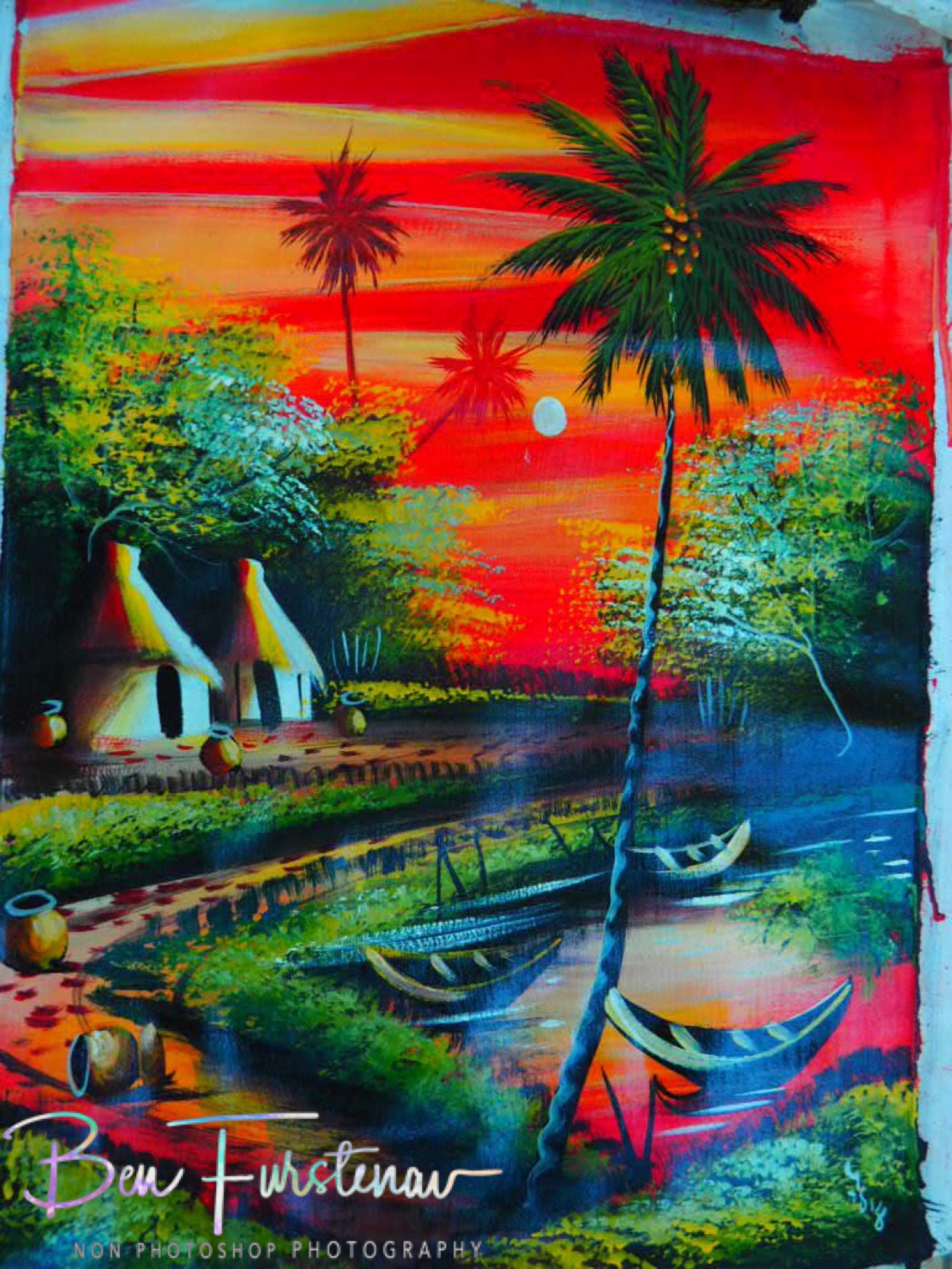 Some colourful oil paintings caught my eye though and I inquired. His daughter studies to become a doctor and finance her study costs with oil paintings on canvas. Colorful, reflecting life in this area, quite stunning.

Just like the photo I took this morning. I couldn’t resist buying a few. After all, Mozambique needs more doctors. I just need to find a home to hang them up. 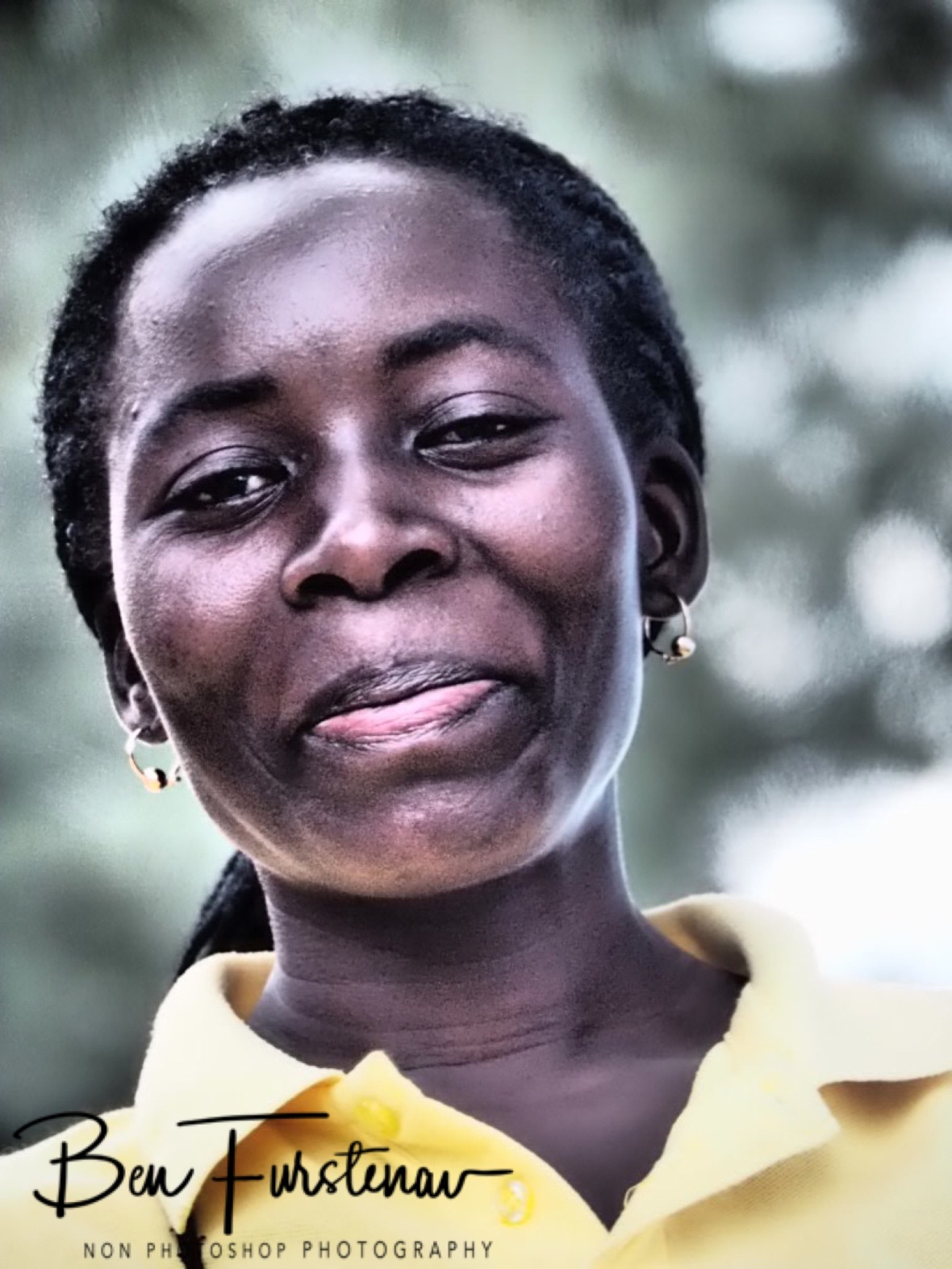 A young friendly lady sold fruits and deep-fried biscoitas. Just what I needed for a lunch break by the calm waters. Further on was another stall, selling sarongs, bags and homemade jewelry. 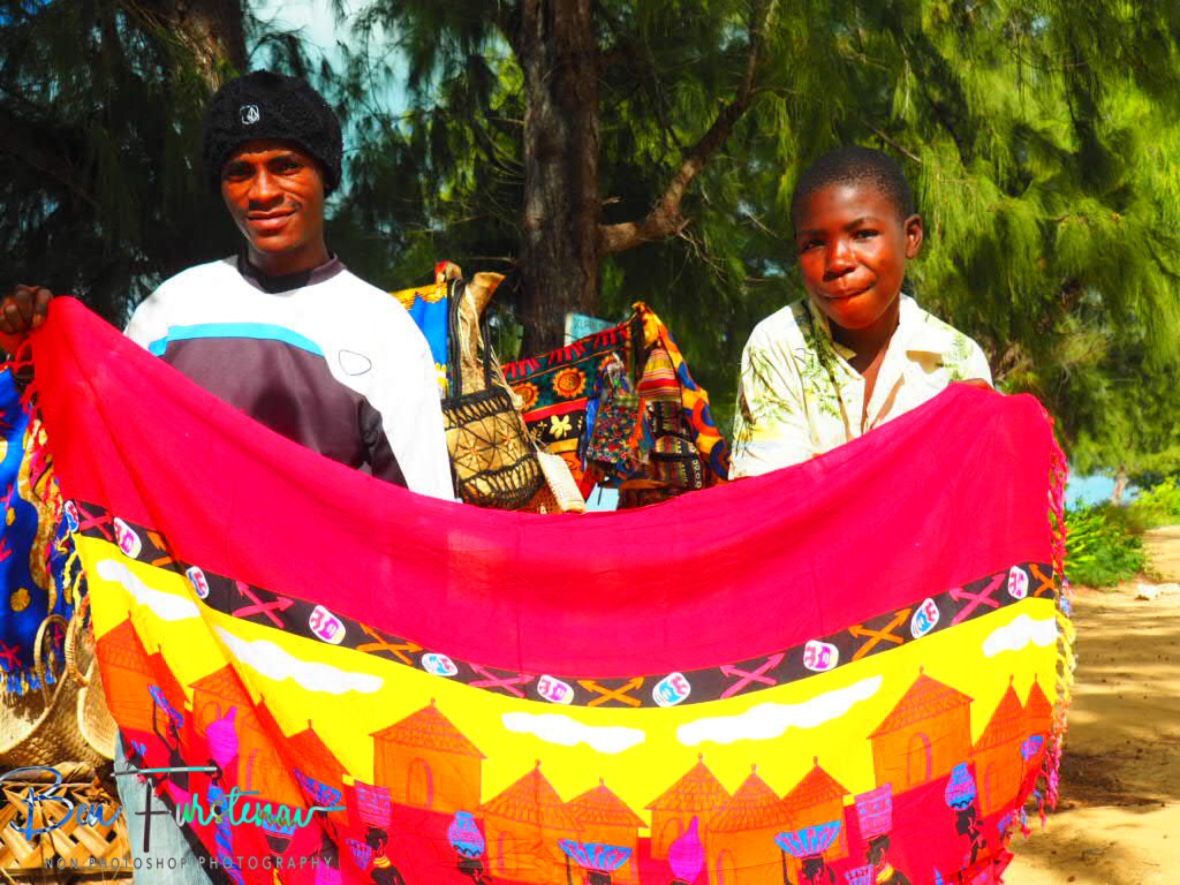 A father and son duo from Tofo moved temporarily up here, where the son attends school. He makes woven bracelets for sale, to buy books and uniforms for school. Education is even more important here for a brighter future.

His mother died a few years back. I admit I am a sucker for these circumstances. We shared some fruit and food, everyone was happy.

It was a really good day. I enjoyed my walk along the shore, knowing I was able to help some desperate people for a brighter future, or at least for a little while. Some of you with similar ‘desperate people’ encounters might think ‘That’s what they all say!’ Possibly yes, and maybe I was lied to. But looking in peoples eyes and seeing the signs of relief after I agreed on a certain prize, is just priceless. For both parties. Next time, someone asks you for spare change, please show some mercy. It is little money for us, but it can make a difference for a day.

Zimba was happily parked in between palm trees, banana plants, and a massive baobab tree. 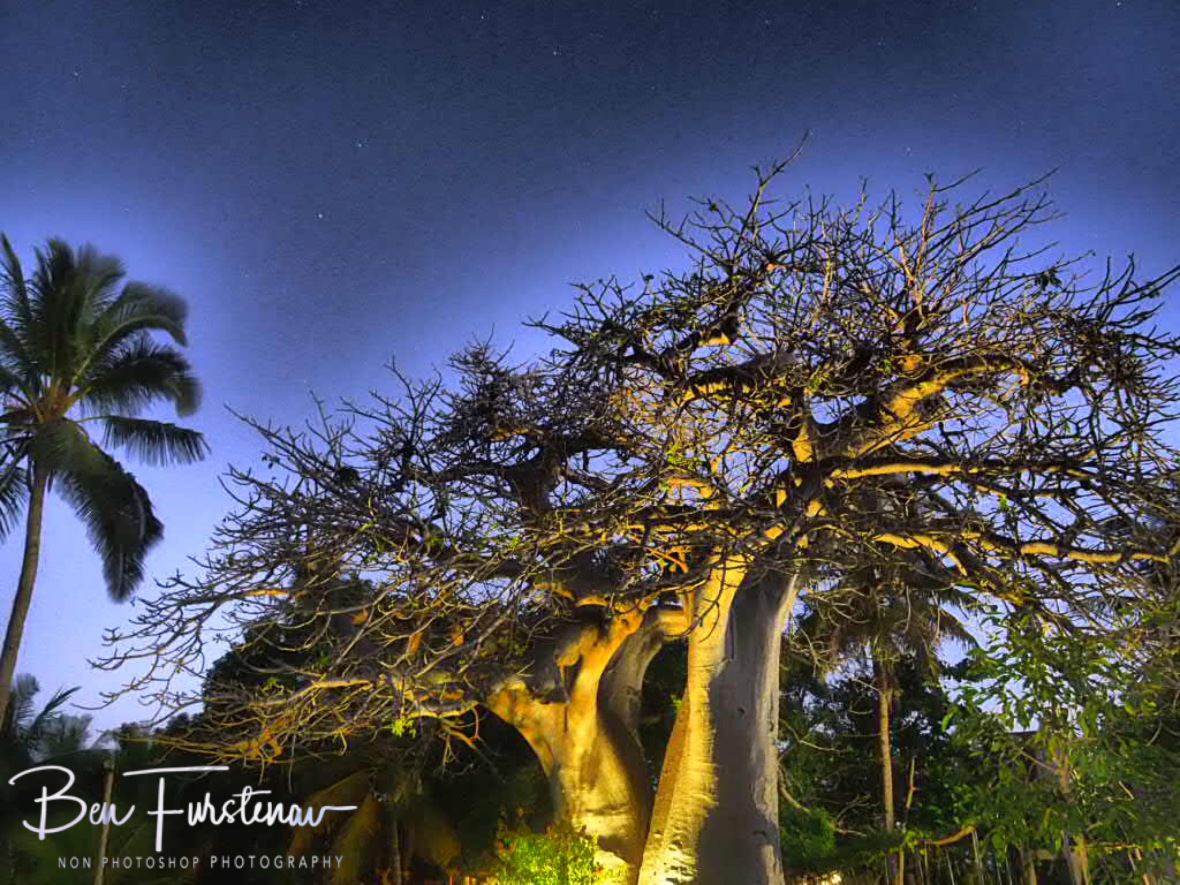 Watching the ‘Southern Cross’ over the Baobab tree sure is amazing.

2 thoughts on “Vilankulo, Life around the Ocean”