And so it began. 9 adults and 5 kids in 5 4 WD’s on the search for serenity, in the middle of nowhere, deep in the heart of Zambia’s dry and dusty plains. No one knew what to expect, what to see or what would happen. Time will tell, but first things first.

Packing and loading Zimba always takes some time for me. Multiply that by 13 and one can do the maths. The good thing was that our first destination, ‘Blue Lagoon National Park’,  was only 100 km west of Lusaka. The bad news was, that the Italians had still a few things to sort out and cross through the heart of Lusaka to get out west. I did too and left them in the city. The traffic was just crazy, more stop then go. I was the first one to leave the big smoke. More friendly and surprised locals waved happily along the dusty roads, until the turn of the junction towards the National Park. The gate never existed and so I drove on to a campsite in the Park. I made it just before sunset and got the fire going. 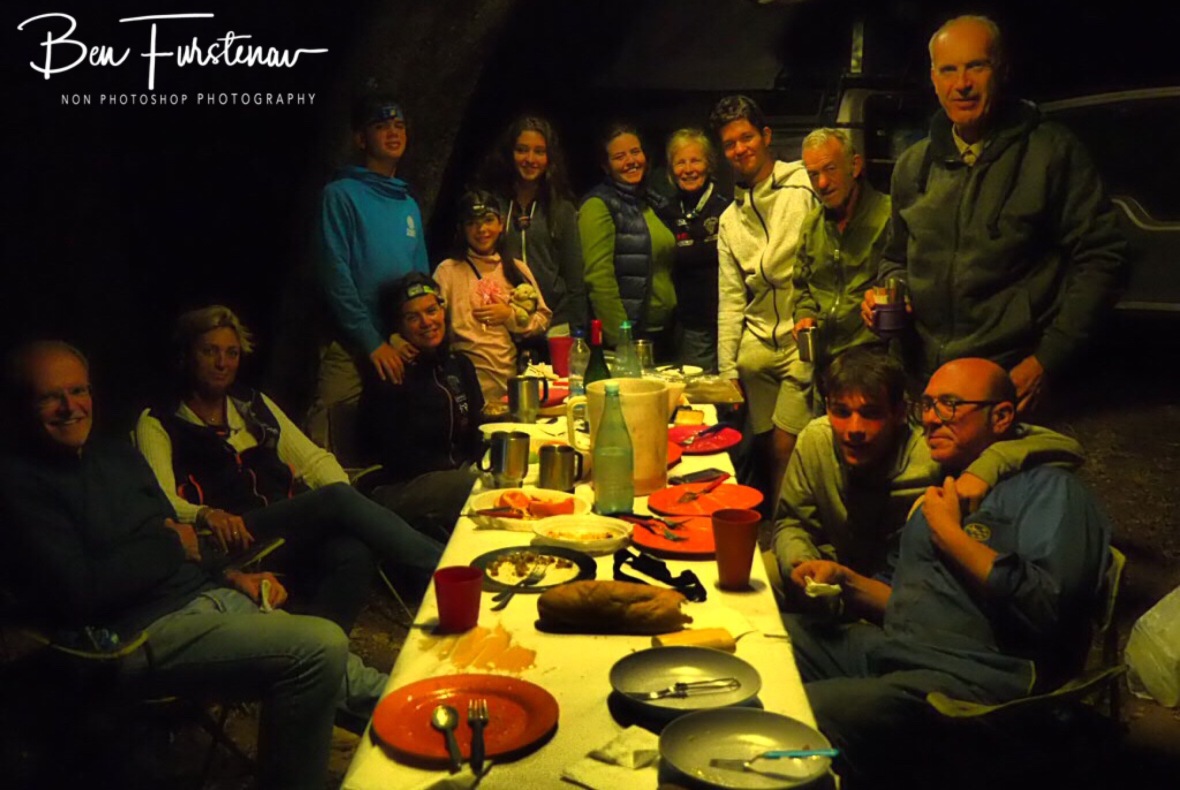 It took a wee while before I heard the first car to arrive. Claudio and family were happy to see me, but told me straight away ‘Big Problem! I broke the axle from the Landrover!’  Not sure how exactly, but that’s a fact. The other Toyota had issues too. A cable slipped into the fan belt and overheated the car, melting the fan belt. I was somewhat surprised to hear all that after such a short distance.

Looking at Zimba again in faith and trust. The coals were hot and perfect to bbq the steaks, but the Italian had a pasta withdrawal. It was Frederica’s birthday today, Happy Birthday.  To be quiet frank, I felt a little uncomfortable. Apart from Claudio and Jasmine, none of the Italians speak English. And apart from Claudio, no one really made an effort. I could see that some wanted to communicate, but a deep language barrier made it simply impossible. Guess I should have seen that coming. 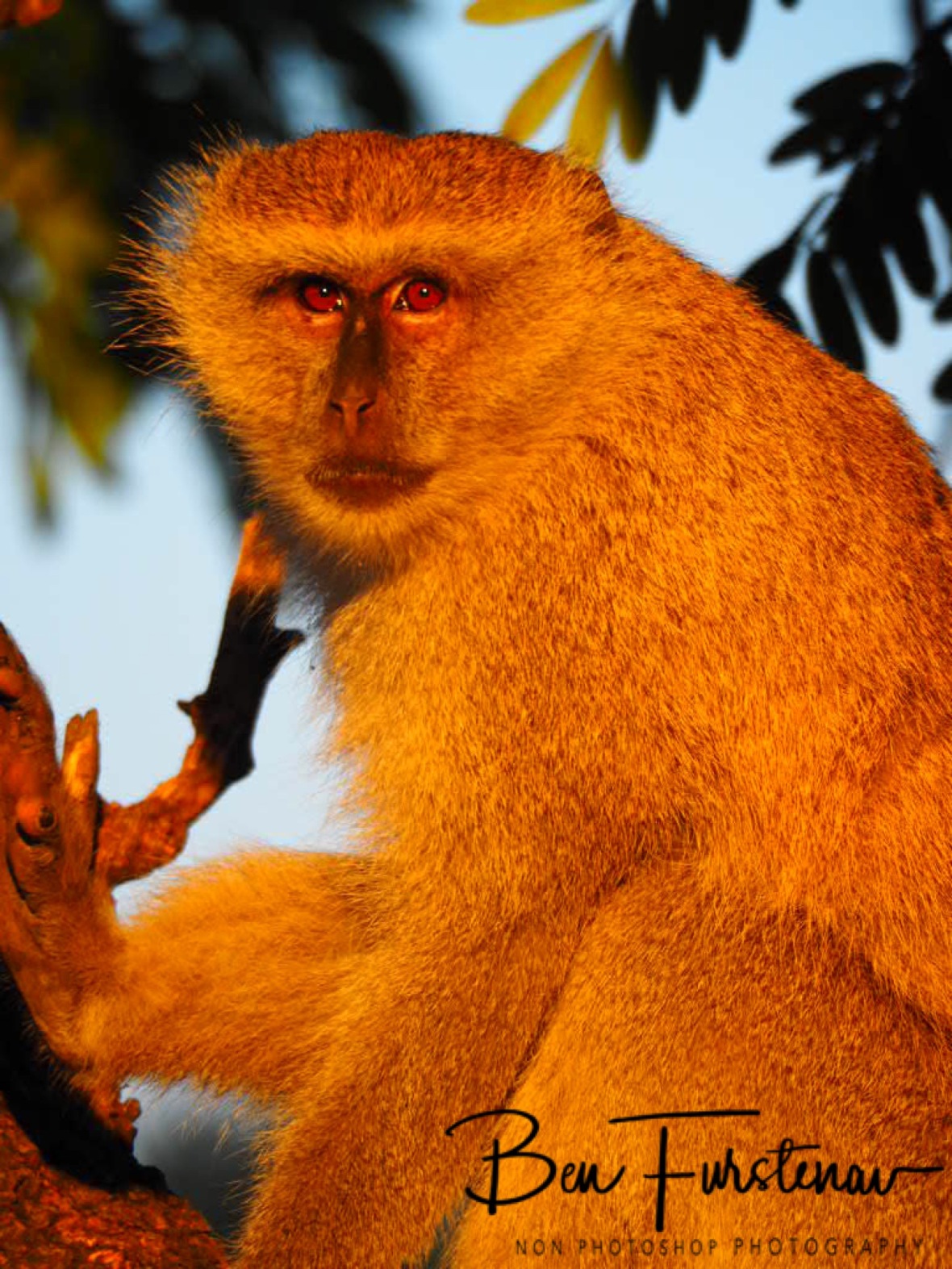 ‘Meercat’ in the sun at Blue Lagoon National Park, Zambia

Another sunny morning warmed the locals and ourselves. It’s been chilly again overnight and Giancarlo got the fire going.

Vittoria and Chiara trained and fed some of the Vervet Monkeys, cute to watch. The fellowship broke up today. Guido and Emanuela returned to Lusaka very early to get their fan belt replaced. Claudio was busy on his Randlover’s axle and had to wait with the rest off the Italians for Guido ’s return. And I got bored. I drove to the so-called ‘Blue Lagoon’ via a  higher elevated 2 wheel track, almost overgrown with high grass, lined with car paint scratching Acacia trees. A couple of otters crossed the path just before me, too quick for a photo though. 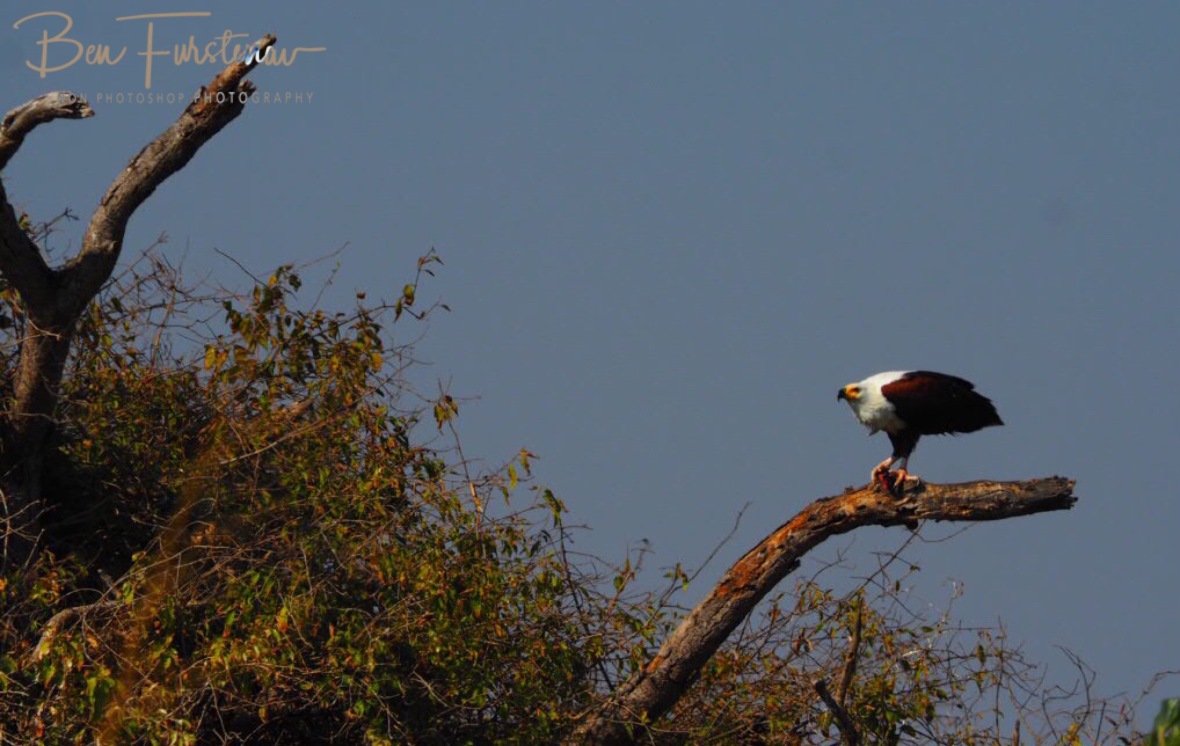 A fish eagle enjoyed some freshly caught fish in the high trees, he tucked in joyfully. Whoever gave this place the name ‘Blue Lagoon’ must have been tripping.

Green Marsh would have been more suitable. I didn’t see any other wildlife here. Not really surprising as the nickname for this National Park is the ‘Coldroom of Lusaka’. Poaching is still a big issue.

At least the monkeys are safe, for now. I shared the news that visiting the lagoon wasn’t worth the effort and drove on to our next rendezvous point, which was in ‘Kafue National Park’ if we would make it. I left late, they would leave even later, the fellowship might break off for a day or two. Heading further west, the track was slow going. Large gravel and immense potholes, hidden and covered in fine bull dust made driving a slow affair. In fact, I stand corrected. This road was even dustier than the track up to Nyika Plateau. Zimba and I got covered in dust inside out, there was no way off escaping the dust.

It got the ‘it really doesn’t matter anymore stage’. We ran in a couple of roadblocks too.

The first herd off Brahman cattle was rather easily passed. The second herd was an impressive sight to see. Like an oversized truck taking over road and sidewalk.

A moped overtook us and beeped it’s way through, we just needed to follow. It sure was a rare sight to see. Some of the longhorns were huge. 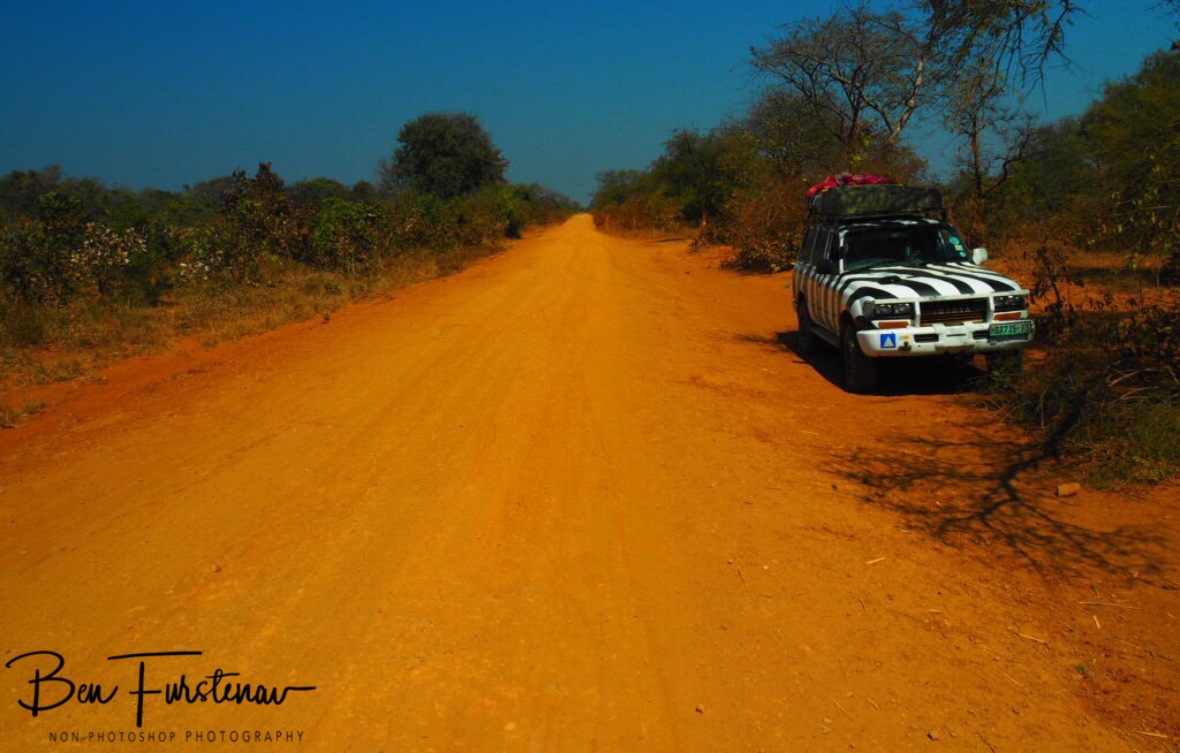 Either way, it was time for a coffee break. The red colours off the track fitted nicely with blue skies.

No matter where you are in Africa, expect a bike to pass you, Blue Lagoon Nat. Park, Zambia

And there was always a bicycle, just like anywhere in Africa it seems.

By late afternoon, I was absolutely covered in dust. Out of nowhere, the Italian fellowship was right behind me, to my very surprise. Claudio mentioned a shortcut track, which I failed to find. They obviously did. I gave them the lead so I wouldn’t be covered in dust, not that made that too much difference anymore

We drove for another half an hour before we sidetracked and camped in the middle of nowhere. Only a few cattle came for a visit to start a show fight between some youngsters.

It was an amusing night around the bonfire, even though I didn’t understand all that much. I can pick up the basic idea about conversations, but am somewhat surprised, that English is not being taught in schools. Only if one chooses English as a subject. A few games and quizzes were played, undoubtedly a happy family vibe in between.

Claudio got up at the same time as me and after a quick good morning, I was on my way again.

The track started like it had finished yesterday, dry and dusty. Add some sun-dried mud flats to it and I couldn’t couldn’t go fast at all.

I arrived at the ‘pontoon’ where the ferry crossed the river.

The taxi rank was busy with pretty locals,

the drivers not impressed to wait.

Joseph is from Livingstone and cycles around his native country. I decided not to cross the river and drove on to the southern entrance off ‘Kafue National Park’.