Most people think I am crazy and over the years I kinda got used to astonishing eyes whilst shaking their heads. I prefer to call it adventurous, no pain, no gain I say. 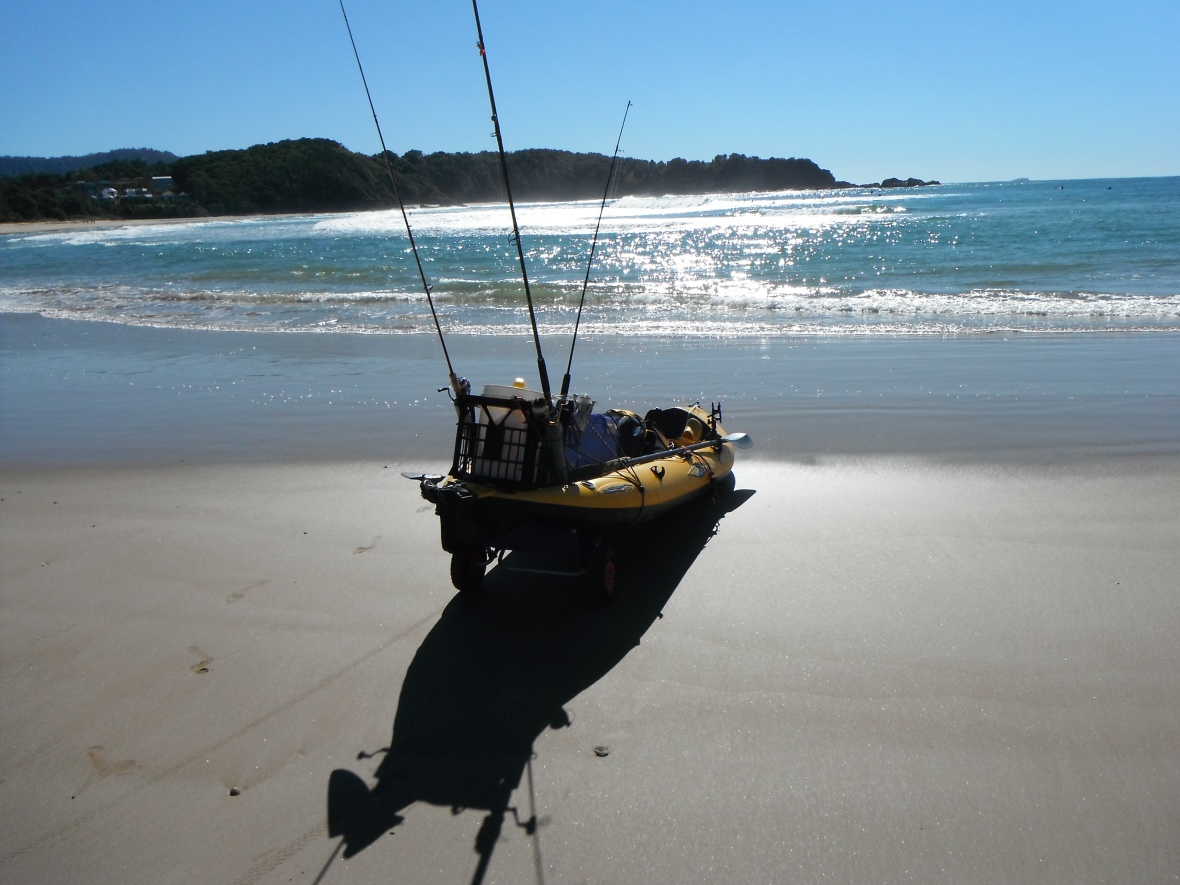 This becomes more obvious when I take my inflatable kayak out on the big blue. I named it  ‘Maniyak’, a suitable name. I just love it. 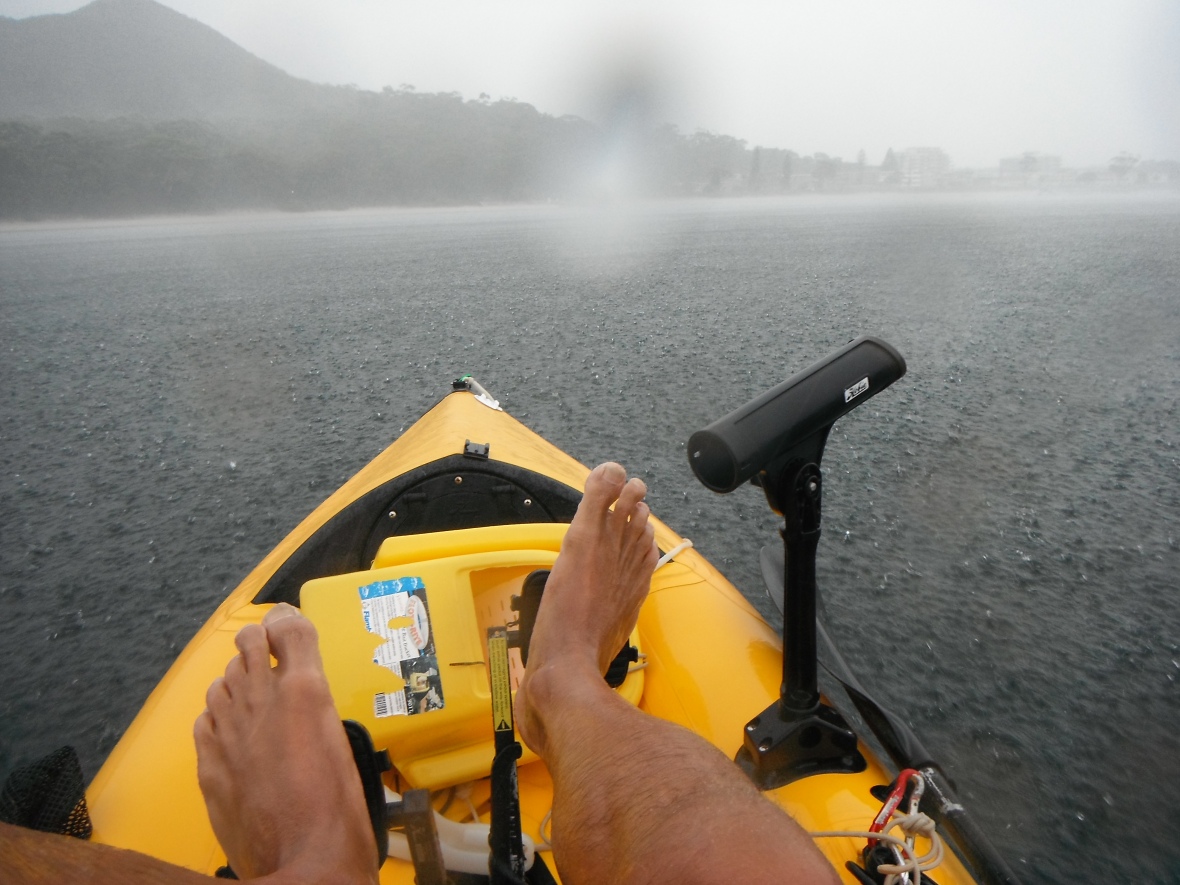 Not only the fact that I dodge waves and storms in a small vessel, but the fact that the yak is inflatable adds a certain risk factor. You really don’t want to run out of air. 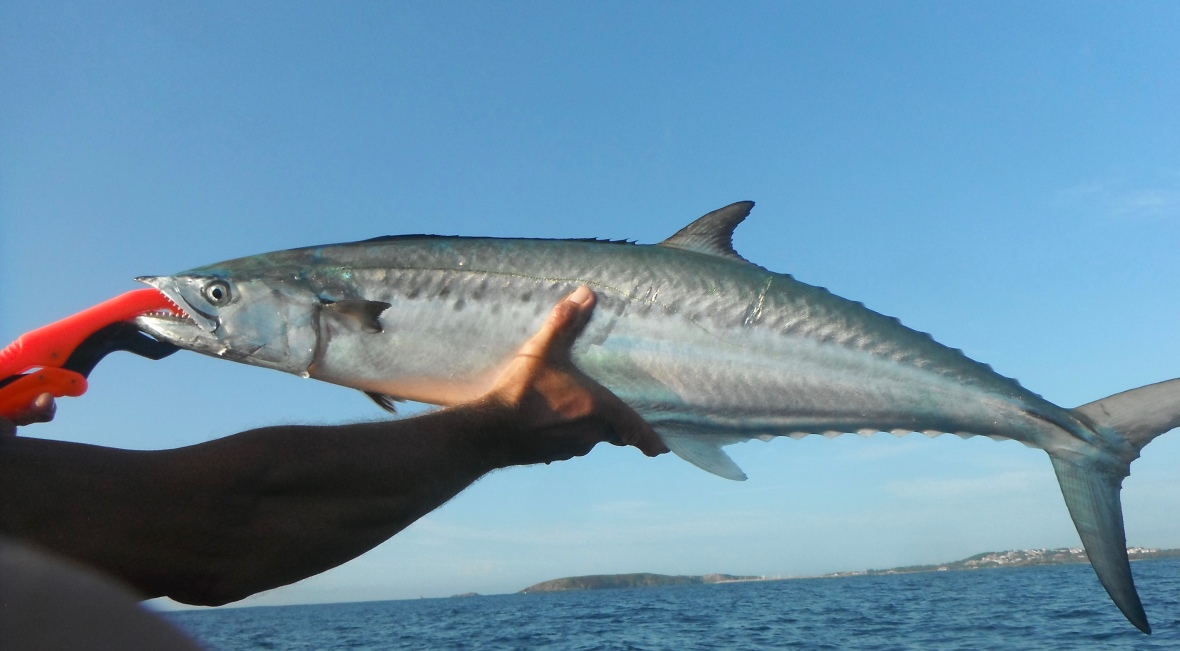 Sharp rocks and fish with sharp teeth or spines are handled with care. So far, so good. Water and weather conditions are the influencing factors for obvious reasons, although I have been pushing my luck a few times and therefore came off and lost gear.

Just about ready to go out from Diggers Beach, New South Wales, Australia

Comments like ‘Are you paddling to New Zealand?’ Or my favorite ‘Why didn’t you get a boat?’  A sarcastic, but fair question. So, why didn’t I get a boat?  Apart from technical advantages like having many more launching options as I don’t have to queue at boat ramps or filling stations.  It is a whole lot cheaper on fuel and insurance as well as spare parts and registration fees, there is much more to it.  What it comes down to, there is no challenge for me having a boat.  No satisfying feeling of achievement getting out there, no sense of adventure.

I would have no sense of freedom in a peaceful and relaxing environment and would get bored quickly.

I have spent a fair amount of time on kayaks throughout my life and have always been a keen fisherman. It’s hard enough to master either skill. Combining them on wild waters is always a challenge. 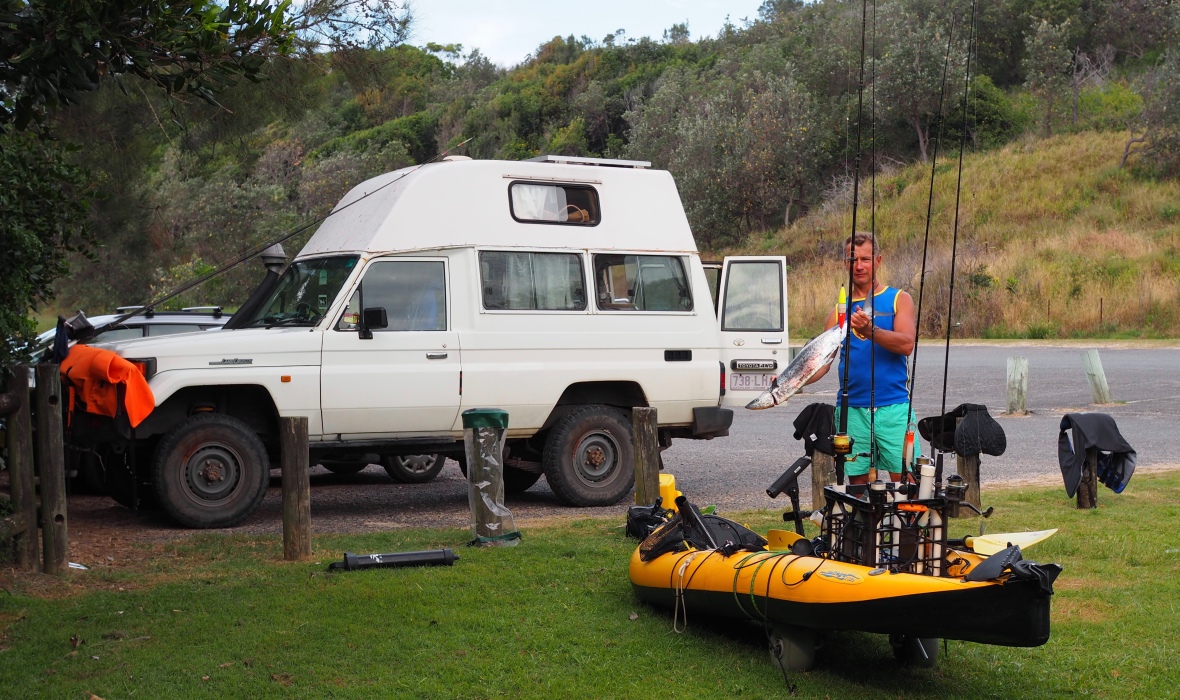 A hard body kayak was no alternative for me, as my trusty Troopy is already 2.40 meters high. A popular brand had a good selection on sturdy inflatable kayaks, which became my obvious choice.

Practice and fun in the surf at Hat Head, New South Wales, Australia

I had to find out how this inflatable kayak handles currents, waves, and wind. And it’s fun in the surf too.

Setting up this kayak with fishing gear was another tricky task. What do I need and what would I fit into this tiny space. Getting it to and from the beach was quickly solved with a pair of beach wheels.

One of many lighthouses along New South Wales coastline, Australia

I started kayak fishing about 6 years ago and set out uncountable times in between New South Wales’ Central Coast up to Queensland’s Sunshine Coast. The main objective is catching fish. 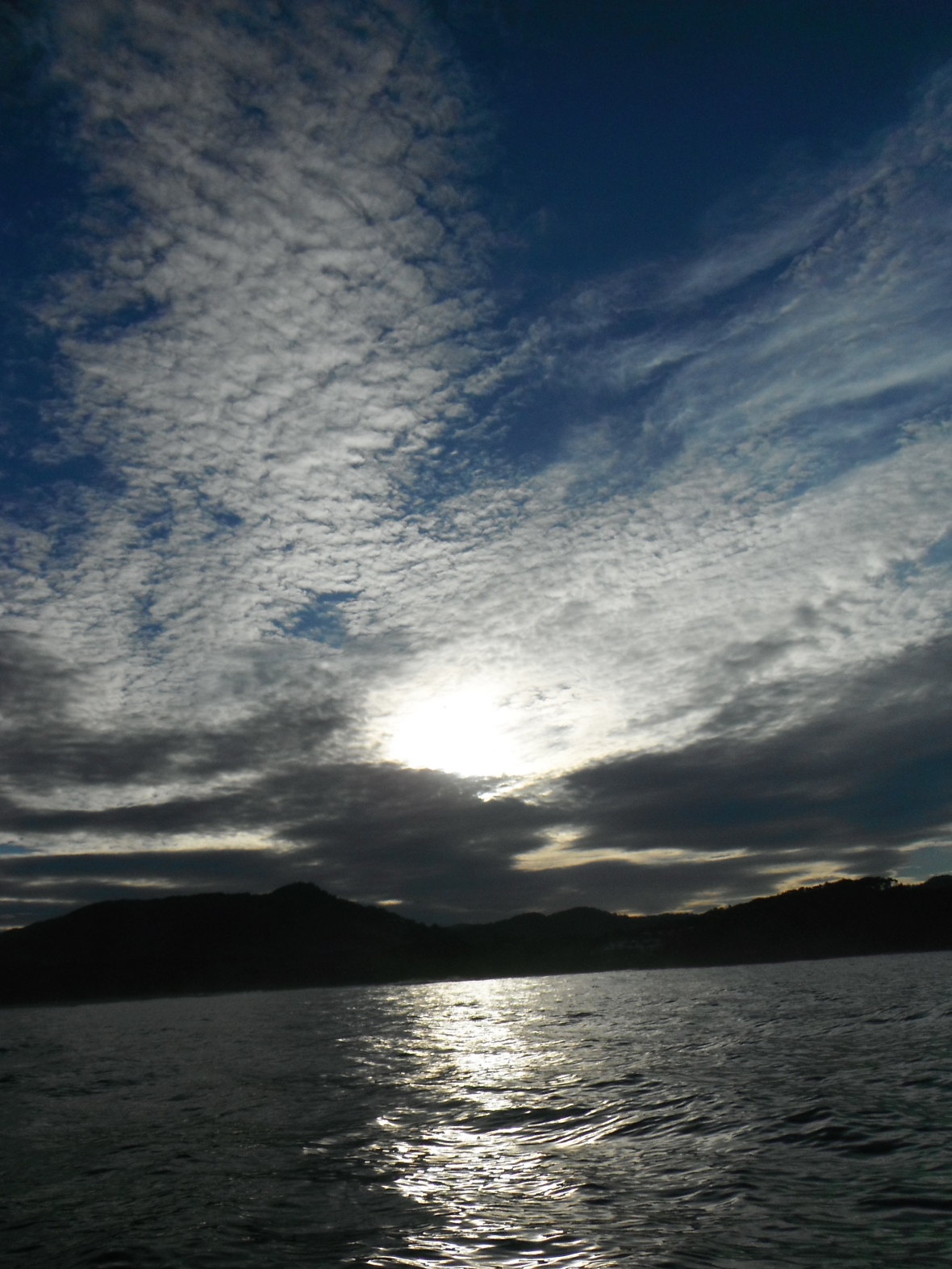 However, just being out on the water with no one around is simply priceless. Just like being alone in a desert, it can be eerie quiet at times. 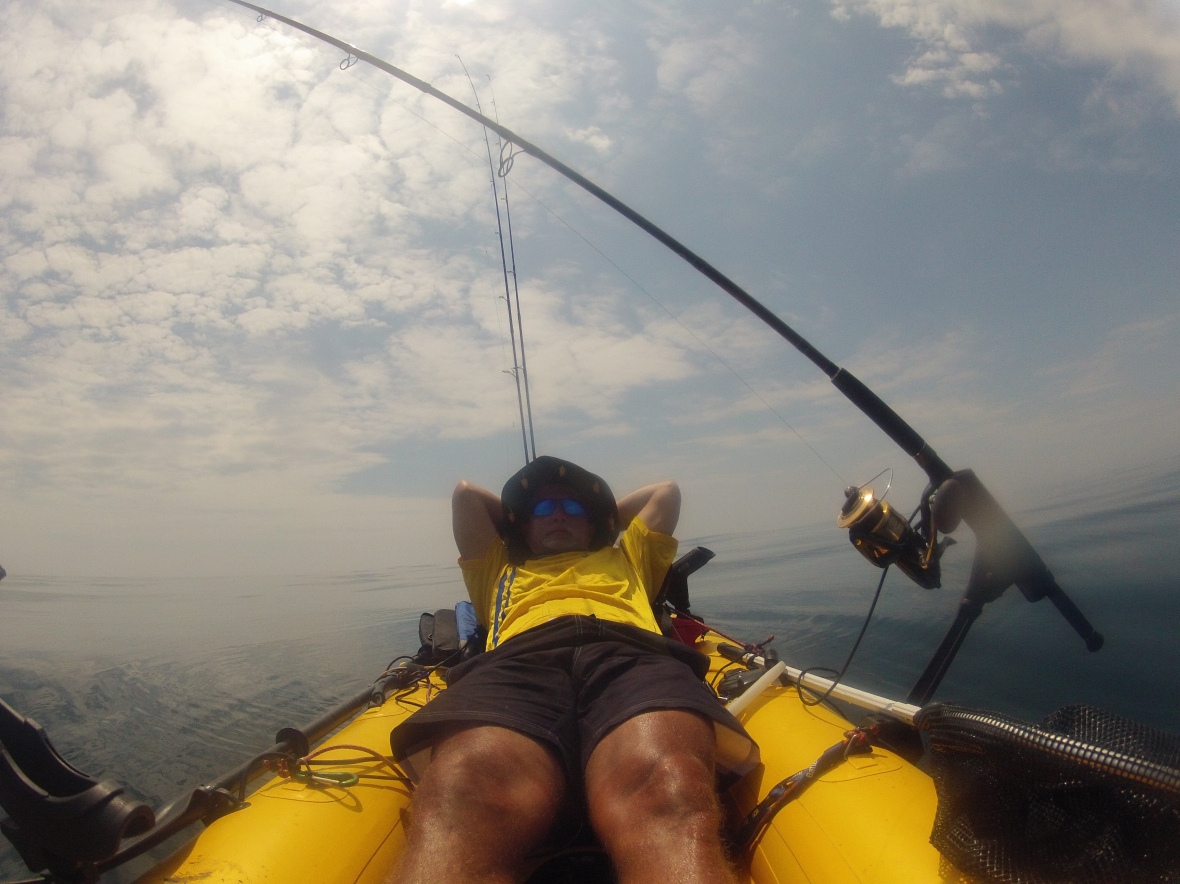 No wind, no waves, no sound. A great spot to relax.

This doesn’t happen very often. In quiet conditions, it is easier to spot dolphins or whales surfacing for air, that in missable sound pinpoints their exact location.

Australia has a stunning coastline. Sheer coastal cliffs and headlands give way to endless and pristine beaches. Most times, I set out before sunrise or return after sunset. 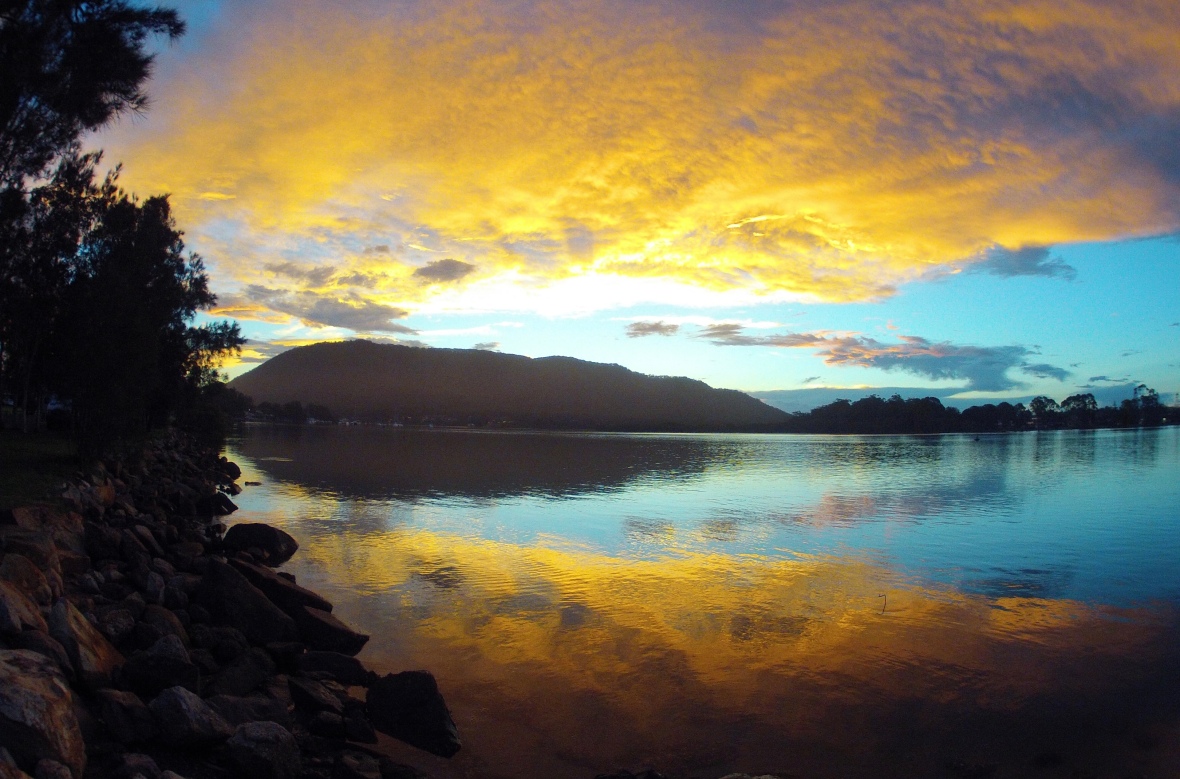 The early morning or late afternoon colours are often spectacular. A colourful display over a rugged landscape or endless horizon is just mind-blowing. Paddling in the full moon shine adds another incredible wow factor, which is hard to describe.

The physical aspect is yet another bonus. Getting to the fishing location with your own strength and skill is even more satisfying, keeping body mentally and physically fit.

Catching a sizeable fish is just a bonus.

I had some unforgettable wildlife experiences out on the ocean, which I most likely would have missed in a motorboat. Many whales crossed my path on their migration along the coast, which is a spectacular sight. Mostly in a fair distance, splashing tails and flippers, having a whale of a time.

The highlight is though when they are breaching the surface in almost full body and create a huge splash diving into the water. Quite spectacular. Whales do that for many reasons, which I might get into more detail in whale watch season.

Watching 3 humpback whales one glorious morning, one of them decided to loop around the Peninsula, only to surface for air about 10 meters away from me. I almost froze as I didn’t expect this gentle marine giant to be there as he dived under my kayak. OM-D, what a feeling. Seeing this huge body in crystal clear waters under my kayak is an adrenaline rush. I am no Atten-pro but would suggest that he was part of a playful young male group who seem a bit more curious then females. It was quite early in the migrating season, which suggested that males leave earlier to their rich feeding grounds around the Antarctic circle and travel faster than mothers with calves. What an incredible encounter though.

Dolphins are always playful and can congregate in huge numbers when plenty of baitfish are around. Many pods form a huge super pod. The clowns of the ocean by far. Playful and curious of their surroundings, some even came up to me in crystal clear waters to check out this strange floating object.

Seeing dolphins or whales on the ocean always catches my attention and leaves me breathless. Marine turtles are cute to watch too. Sticking up their balloon-shaped head, gasping for air, before quickly diving down to the reef. On one recent outing, I must have seen at least 30 turtles over a shallow reef in clear waters. A rare, but positive sight. Just magnificent.

Stingrays are often seen in shallow waters. I have even seen a huge manta ray on a very calm day.  I couldn’t quite make out the commotion from distance and was somewhat surprised to see this young manta ray’s acrobatics in glass-like waters. Awesome.

Sharks are the magic word, giving most people shivers through their spines. These shark-infested waters have had numerous tragic shark attacks on surfers. I, however, haven’t seen any white pointers, tiger sharks or aggressive bull sharks anywhere near my kayak. 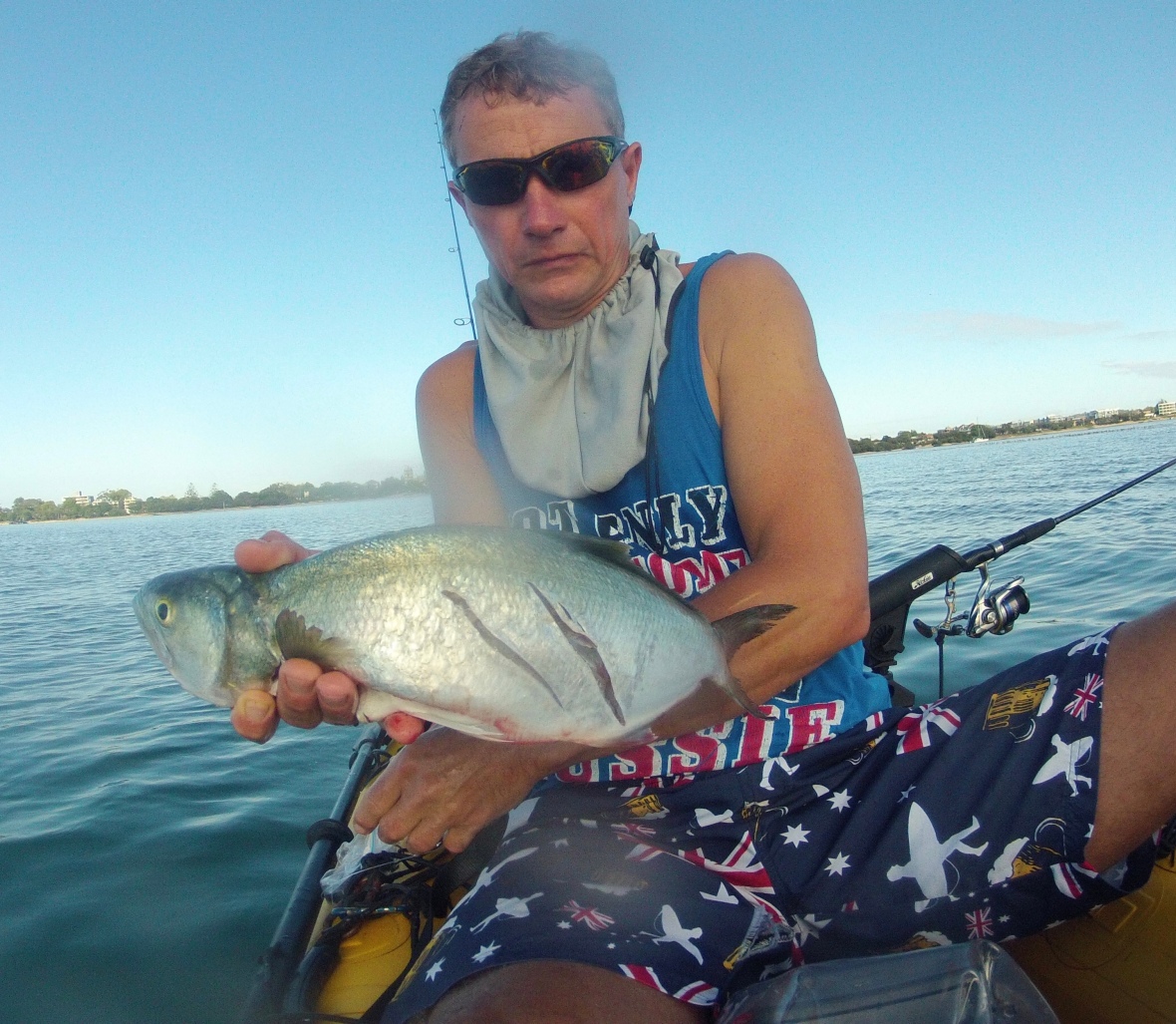 This tailor was a shark attack victim on the Sunshine Coast, Queensland, Australia

Some sharks have tried to get my fish on the line. 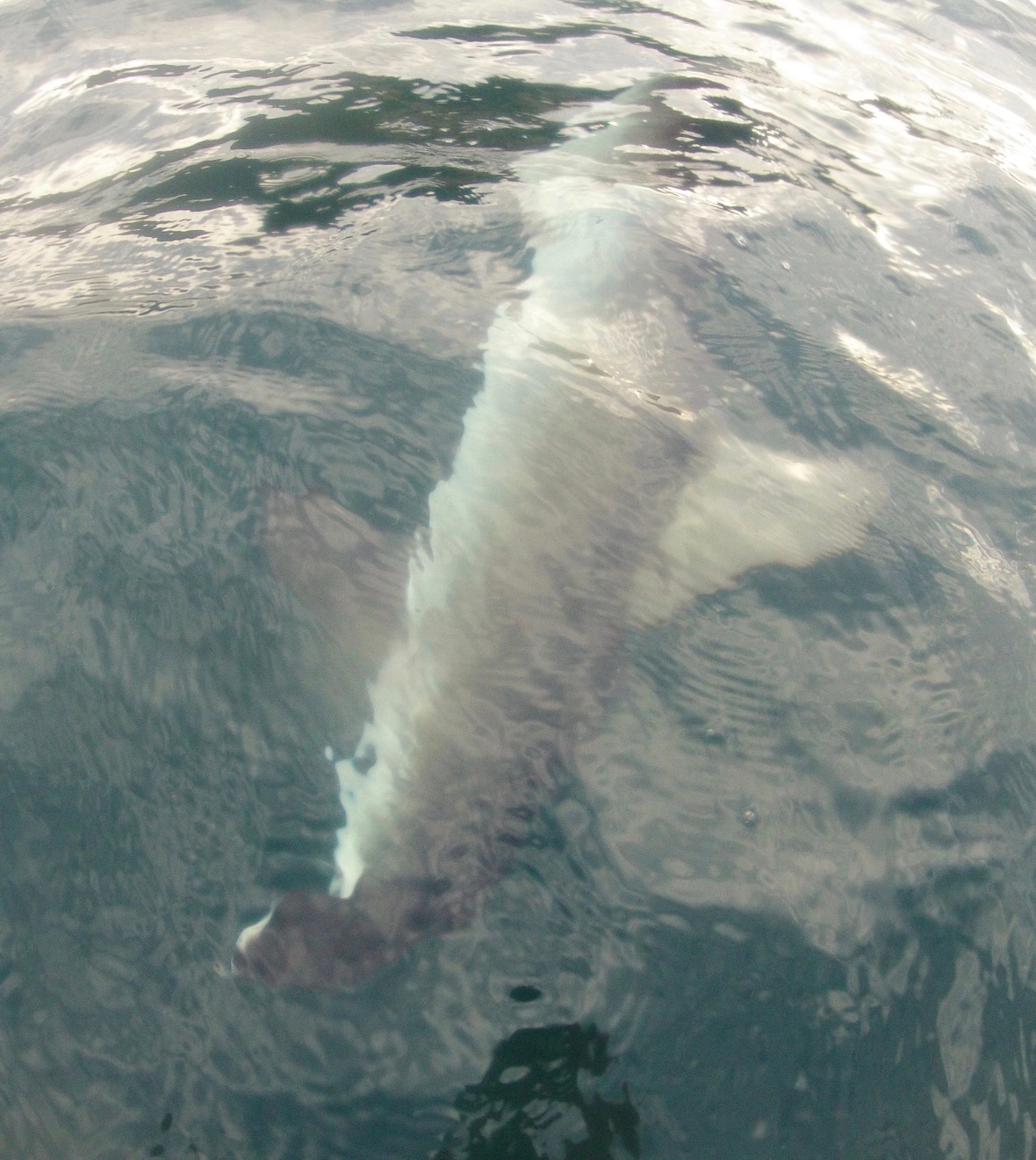 I have caught and released a few smaller reef and hammerhead sharks, which are good fighters and cute to watch.  Once carefully unhooked, they all swam off again without any serious incidents on both sides. 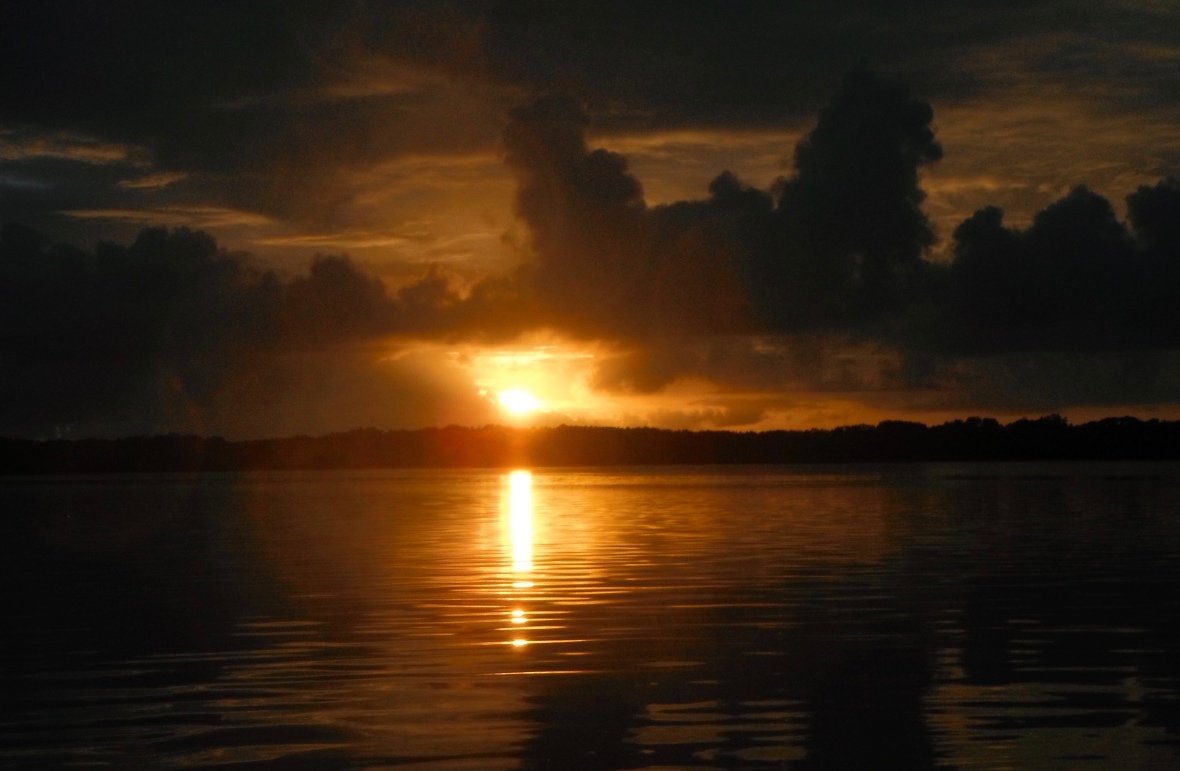 The last rays of light over the Sunshine Coast, Queensland, Australia

All factors combined are the reasons why I didn’t buy a boat. I never know what to expect when I get out and hope for the best. So far, it has been incredibly amazing. 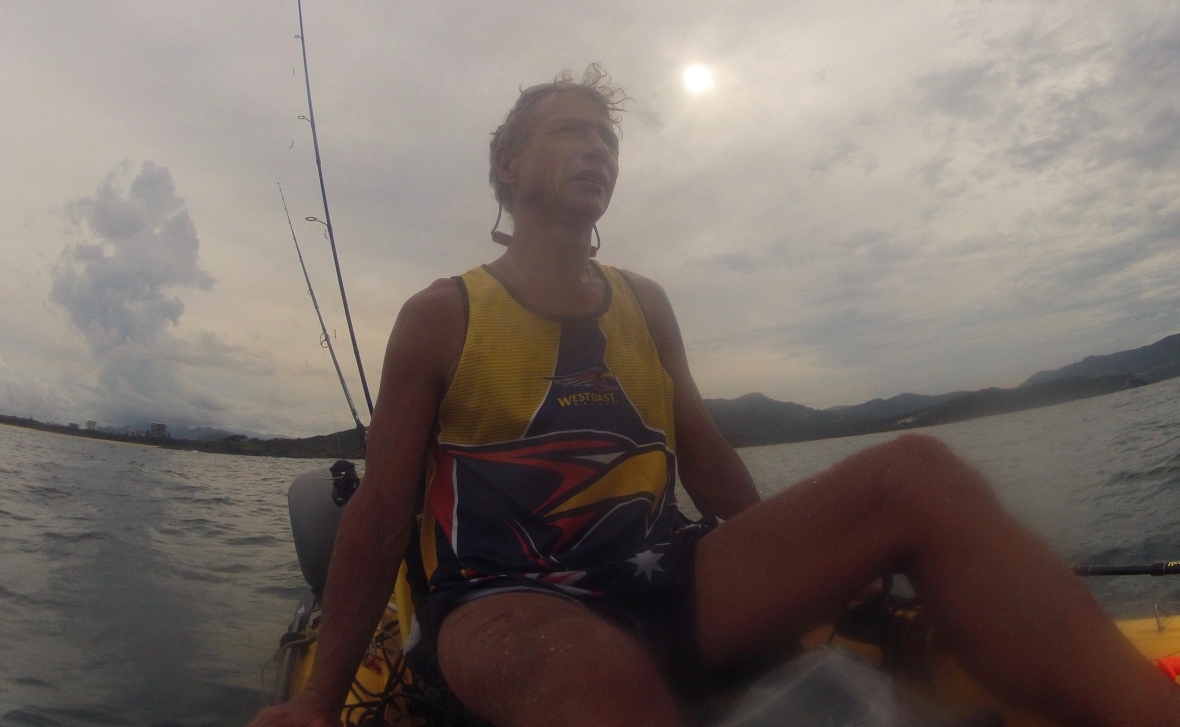 My body is often exhausted, my mind always in peace.

5 thoughts on “Why didn’t you get a boat? Australia”