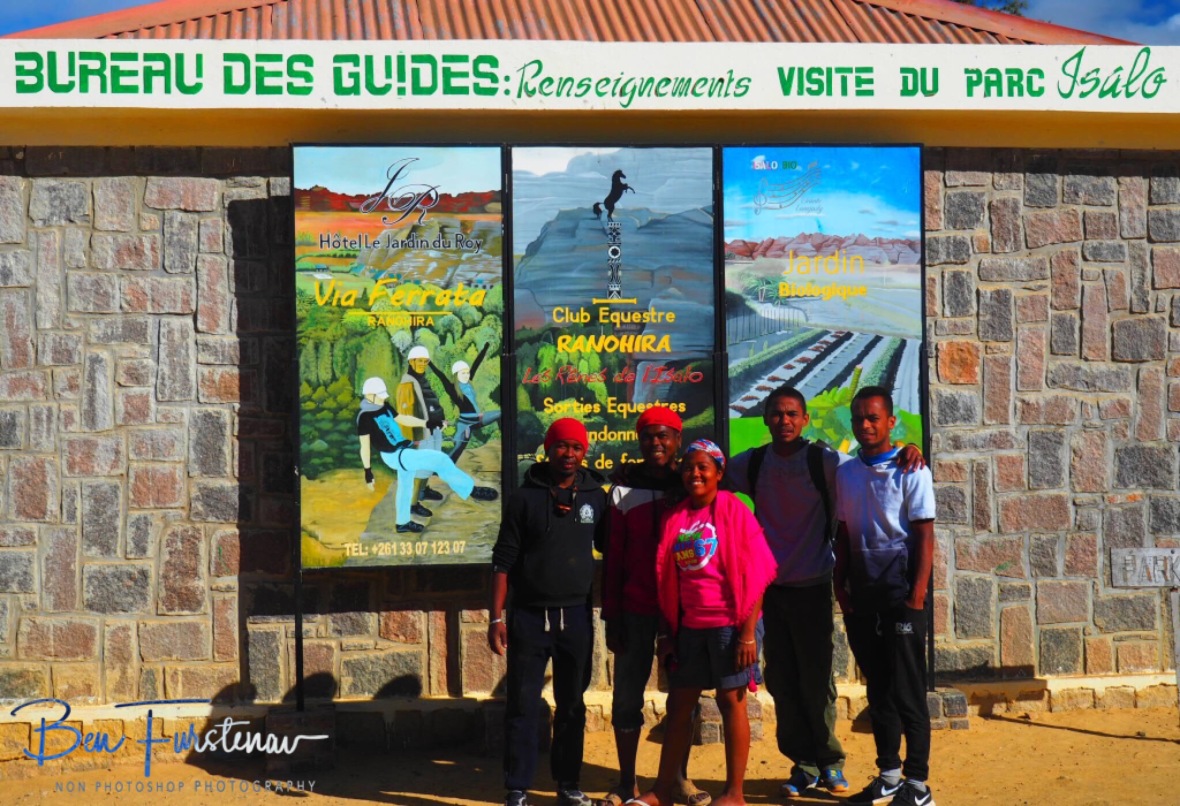 Odilon was working on the car again, it always seems in need of some mechanical adjustments. We left later then expected. Moora moora time again, and hard to miss. Tulear is another busy city and the biggest in the south west. After a few stops we were on our way inland, off to the highlands for some overnight trekking and camping… yay… I am really looking forward to this!

Highland camping near the escarpment

What really amazes me about this country is the effort and distance locals travel to get their basics; out in the middle of nowhere you always see them walking or pushing a cycle or a handmade wooden cart to carry either water or rice or firewood. Us westerners ‘wassa’ are complaining when we don’t get a car park near the entrance of a shopping mall..! Think about that for a second.. on the flip side of the coin, as soon as Malagasy own a car, walking even 100 m seems to be to far…how does that work out…? Things that make you ummmh…

We stopped at the homemade rum distillery, and were quickly surrounded by kids and people trying to sell us rum… very pushy and harassing, in comparison to the friendly locals by the the beach… we bought a bottle of rum, an ex 1.5 l plastic bottle filled up with some lethal spirit, for some very cold nights ahead.

We had a flat tyre and needed to change it, on the R7, a very busy highway. It took good old Odilon three turns to get enough wood under his jack, to get the car high enough to change the tyre. I could have told him that from starters, if he had asked me, but decided not to get in to a man’s business and entertained the local community instead. 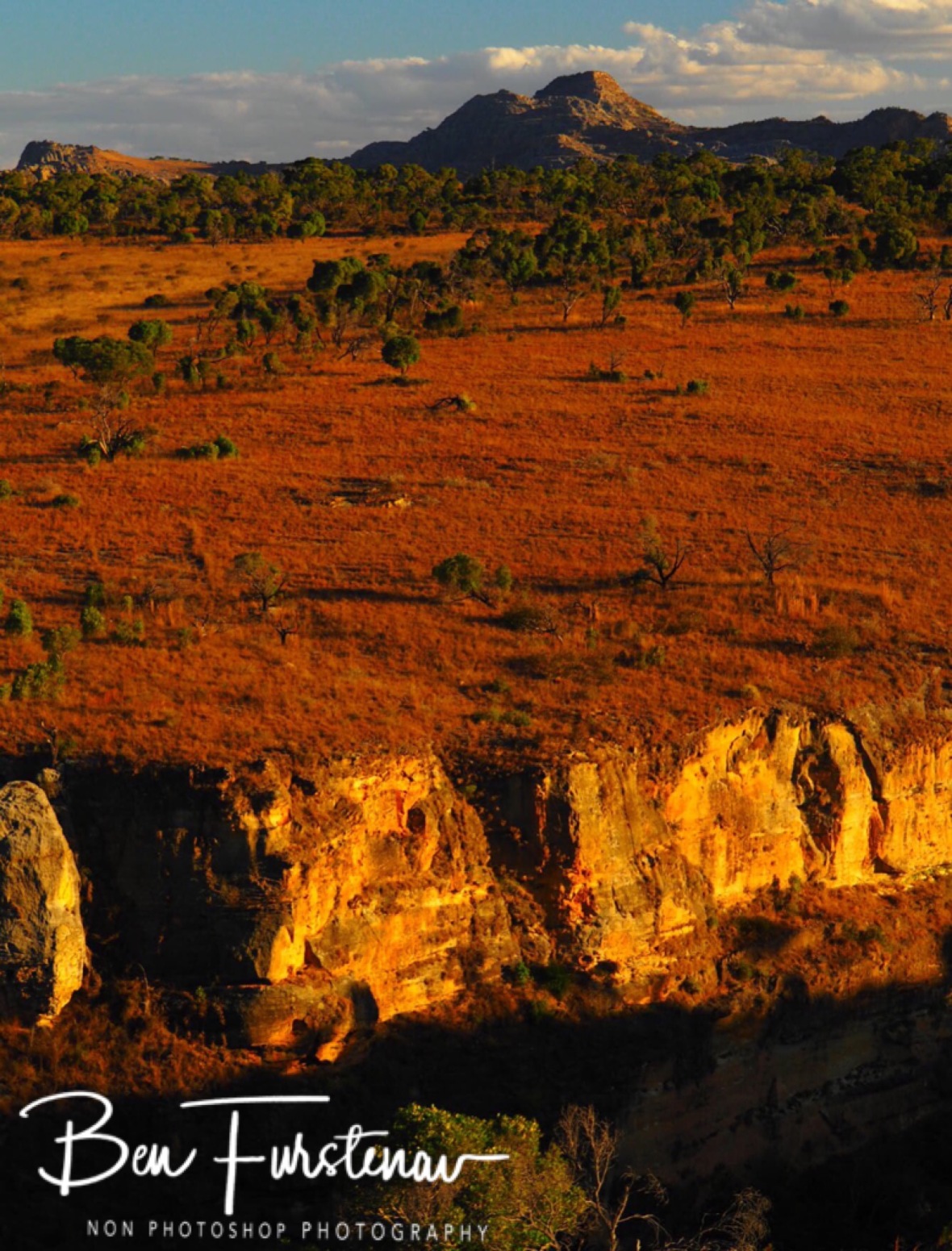 Late afternoon, we arrived in Isalo town where we picked up Francois the cook, Deba the porter and Santer, our local guide,who spoke very good English.
Isalo Nat.Park is overrated according to ‘Lonely Planet’, but once again, I have to disagree… the park features stunning gorges with creeks and lush flora,amazing landscapes and viewpoints,at least one easy to get to waterfall for a chilled plunge and a relaxed picnic. There is ancient history about the ‘Bara’ tribe, but most of all,extremely friendly locals.

The ‘Bara’ tribe, which inhabited this area before it became a Nat. Park, are also called the Zebu stealers. Yes, they steal Zebu from young age, as part of their tradition to become a man. The more they steal, the more acceptance and power will be acknowledged from elders. From what I understood, they only steal from their own tribe. The more zebu he steals, the more woman he can marry, as one has to ‘pay’ for a wife with a zebu. More wives, more kids, to protect the own zebu from stealing. Bit of a vicious circle, but that is their tradition. The ‘Bara’ tribe are also of stronger and solid built, in comparison to other Malagasy. They honour their ancestors in following fashion. 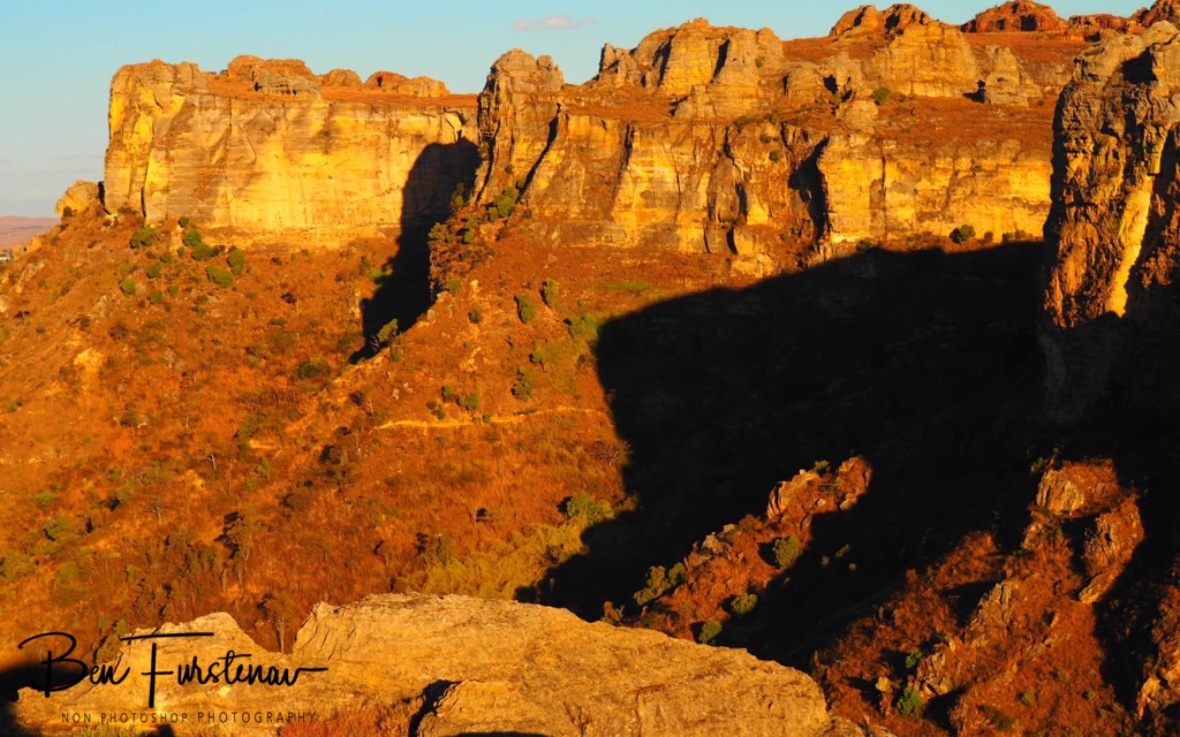 When someone dies, and the mortality rate Is fairly high, they get carefully wrapped in their best clothing and placed in either wooden or metal coffins, depending on the wealth of the family.
These get buried in ‘easy’ to get to caves, in between the cliffs of the area. I say easy to get to caves, because 5 years after, with a huge ceremony including friends and family from near and far, the coffins get dug out  and the remains get permanently buried in caves, high upon the sheer cliffs within the area in secret locations. I decided not to take any photos of coffins or caves, to respect the peace of the ancestors. However, if you have a look at the massive escarpment on the photos, this is a massive task. 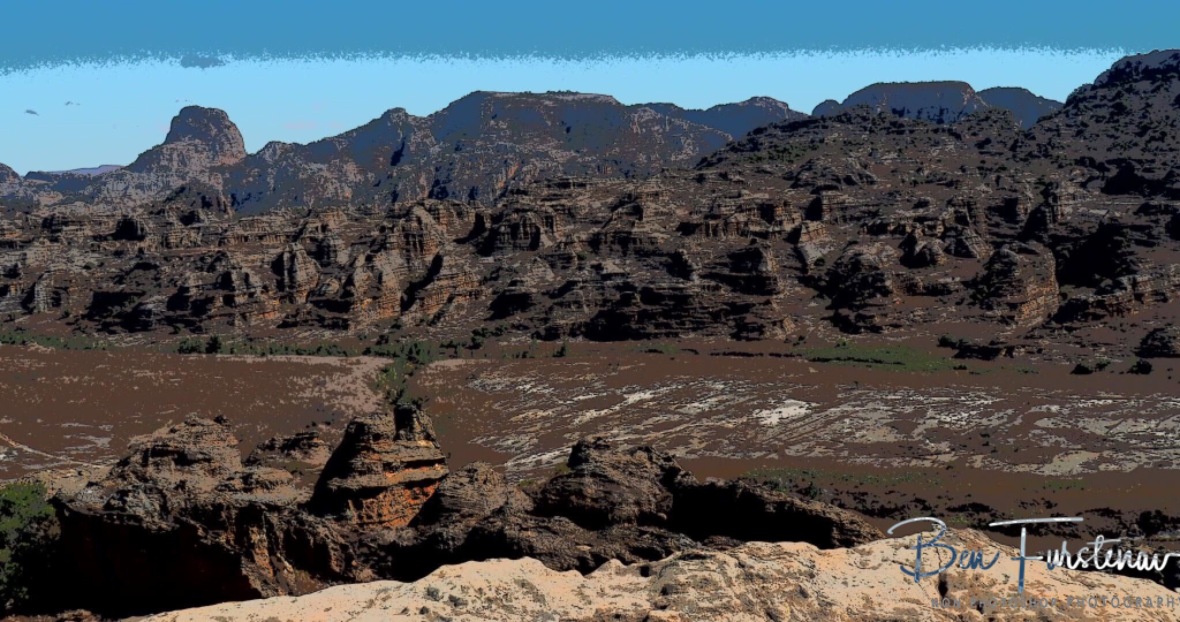 The most amazing experience I had at Isalo, happened on our first night. After camp was set up near the escarpment, Francois cooked up a delish dish and plenty of it, we all had dinner together. Santer said that this was the first time ever, he had dinner with a ‘Wassa’, and possibly the only time ever. A massive compliment to me. I replied, that this is the first time, I had dinner with Malagasy and hope it will happen more often. With Santer speaking good English, I finally had a chance to chat to Ninah and asked what she was thinking about our trip so far. She was clearly worried and sorry about the mishap on our pirogue journey to Belo sur Mer. I tried to explain that what happened happened, and is in the past, and there’s no need to worry. A few rum later within a comfortable atmosphere, Santer and I went to the camp kitchen, where the warming fire was blazing. I explained the expression ‘bush TV’, which he found amusing. Deba was warming up his wet clothing, as he slipped in to the creek earlier whilst crossing, to the amusement of all of us. He smelled of beer earlier, as he got a late work call, from what I understood.

Our friend ‘Barrak’ appeared quickly and we still had lots of rum. I asked Santer, what Deba said to me earlier in the car park when we first met. What it came down to was that he had a late call in for work and instead of the usual 3 to 4 ‘wassa’ there was only one, which meant less hard work. And he added, that he never met a wassa like me. Having dinner, rum and barrak together in the camp kitchen was unthinkable to him before. He added a few more sentences, I don’t want to repeat, as some people might call that blasphemy. I was speechless and deeply moved and just wanted to give him a big hug but that would have been pushing it. Ha ha…
What a night, what an experience, what a place. Misotta Isalo.

Another glorious sunny morning, the sun was shining and reflecting of the escarpment.
Early morning start, as were busy hiking today. First stop were two gorges, cut right in to the escarpment. Being shady and moist, it was surprisingly lush in there. The water was as clear as it gets, see thru.

Some good spots to watch the reflections too.

A few wee waterfalls were nestled here and there, moss covered tree stumps and ferns aligned the picturesque view.

From there we walked back to the car, to get to another highlight of this park; a refreshing waterfall for lunch and shelter from the midday heat. Perfect to chill and cool of.

There is a large number of hiking tracks here, from short hourly tracks to multi overnight hikes.

In all of Madagascar’s National parks, a local guide, a porter to carry and a cook are compulsory to hire, one can not just walk off. Shame really, but on the other side, keeps locals employed and it always is a funtastic atmosphere. Santer and I walked on along the gorge and escarpment and pointed out the caves used to bury the ancestors. It felt a bit eerie too.

Just before our camp spot, a group of Ringtail Lemurs, or locally known as Maki, crossed our path. I haven’t seen these before, they didn’t seem to be to fussed about us either. We had a quick stop at the camp and Santer and I decided to walk on, through a narrow gorge with lots of water and to a look out point over the escarpment.

We chatted pretty much all day about Madagascar, it’s people, history and culture. Quite an amazing country indeed.
The evening was a mixture of food, drink and lots of laughter and joy, under clear skies.
We walked out of the park next morning, not before taking a few group photos…?

We picked up Lala in one of the small towns along the way,who was introduced as my guide for the trek at Nat. Park de Andringitra. It turned out later, that he was the replacement for Ninah for a very tough trek, and I can blame her for not going. I would have just wished that she told me directly, but maybe there was a bit of communication breakdown.

Rice farming in the highlands

First stop was a small nature reserve in or near Besalo. I went on a 2 hour stroll through the forest with lots of wildlife, like Maki’s.

Also got to see a chameleon and amazing views to the granite escarpment.

Parts of it reminded me to Yosemite Nat. Park in the USA.

The lush meadows reminded me of the Queenstown area in New Zealand, without snow covered peaks.