We arrived in Ambalavao, checked in and checked out the local paper fabrication. The wood gets cooked and dried, then later hammered to a smooth paste and deposited in 480 g round balls. These then get spread out evenly in about 50 to 150 cm squares and laid in water again to settle. 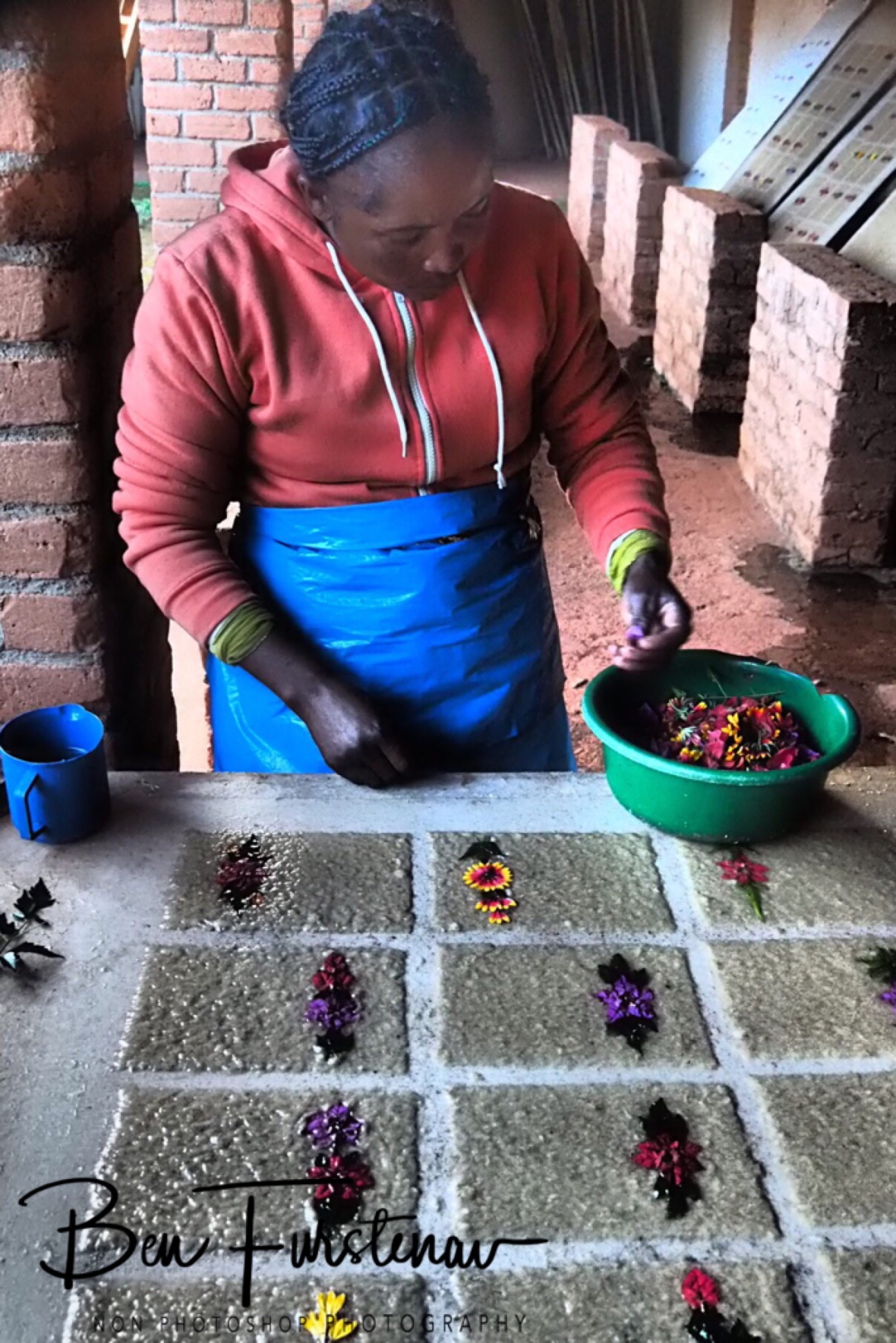 After the water is drained, they get cut into even pieces and set out to dry. Later fresh picked flowers are carefully added and glazed with a starchy substance. Quite extraordinary! An old technique introduced by the French, when they ran out of paper to print the Bible.

The early morning start was delayed as expected, due to a visit to the local zebu market, the biggest in the country. Again, locals go to extreme measures and cover vast distance to appear here every Wednesday and Thursday. And it sure is quite a spectacle.

We then hit the largely neglected road to Parc Andringita. It took us about an hour or more to cover 42 kms. The inaccessibility is the main reason, this amazing Parc is little visited and doesn’t bring much tourist money in to the region. I hope the government realises someday soon, the potential and importance of this hidden jewel. We picked up Florie, my local guide, Deba( deya vu???), our porter and cook. Lala, who spoke fair English, told me then that Ninah wasn’t feeling well, and won’t join us. Fair call, but a bit more honesty would have been appreciated. Odilon couldn’t join us either, as he had to pick us up on a different location in 3 days. Shame.

Clouds rolling in over mountains peaks

Florie and I set up first, the others would follow, with cooking and camping utensils.
Due to previous hikes at Isalo, my legs were fairly tired and the sometimes steep ascend up to 2050 meters was very tiring. It didn’t rain, but low clouds covered the peaks around us, I just hope the weather gods stayed with me. And they did, in an extreme way. We reached Basecamp late afternoon, after a few well needed breaks. A few fellow trekkers and a large young group from Scotland were already here. The Scots are here on a youth education program, which I found fascinating.

Two cooking huts which looked like out the ‘red riding hood’ fairy tale, I thought. Several fires were burning, with pots and pans on top, cooking fresh and hot meals. That was necessary, as the temperature dropped considerably. I stayed inside for a while, but needed a breath of fresh air, as the smoke was intense. The locals didn’t seem to care or, it is just occupational hazard. I went to bed early, a blanket of clouds covered the area. Cool, it won’t get too cold then. Well, I was clearly mislead, as when I went to the toilet during the night, my tent fly, which I used for the very first time, opened like a door.

Frozen solid and a stray clear sky greeted me. How impressive was that? I thought of taking a shot with my OM-D. The moon had disappeared already and little light meant a lot of trial and error with long exposure shots. And it was way too cold for that. Back I went in to my warm but damp sleeping bag.

I slept well and was woken up by a very strange rooster call. I looked outside my frozen tent door and saw the strangest rooster in form of Florie, all wrapped up as warm as possible. I had a good chuckle, which was the start of an impressive day to come. The sun shone on a solid frozen ground, clear skies and no wind, a photographer’s playground.

I was friendly greeted in the hut by some cold faces and was told that it had reached about minus 5 degrees Celsius overnight. All guides, porters and cooks slept curled up together, on freezing cold rocks. I find it hard to sit comfortably for a while, cant imagine to sleep on them, in these freezing conditions. I understand why Ninah didn’t want to go on this track. 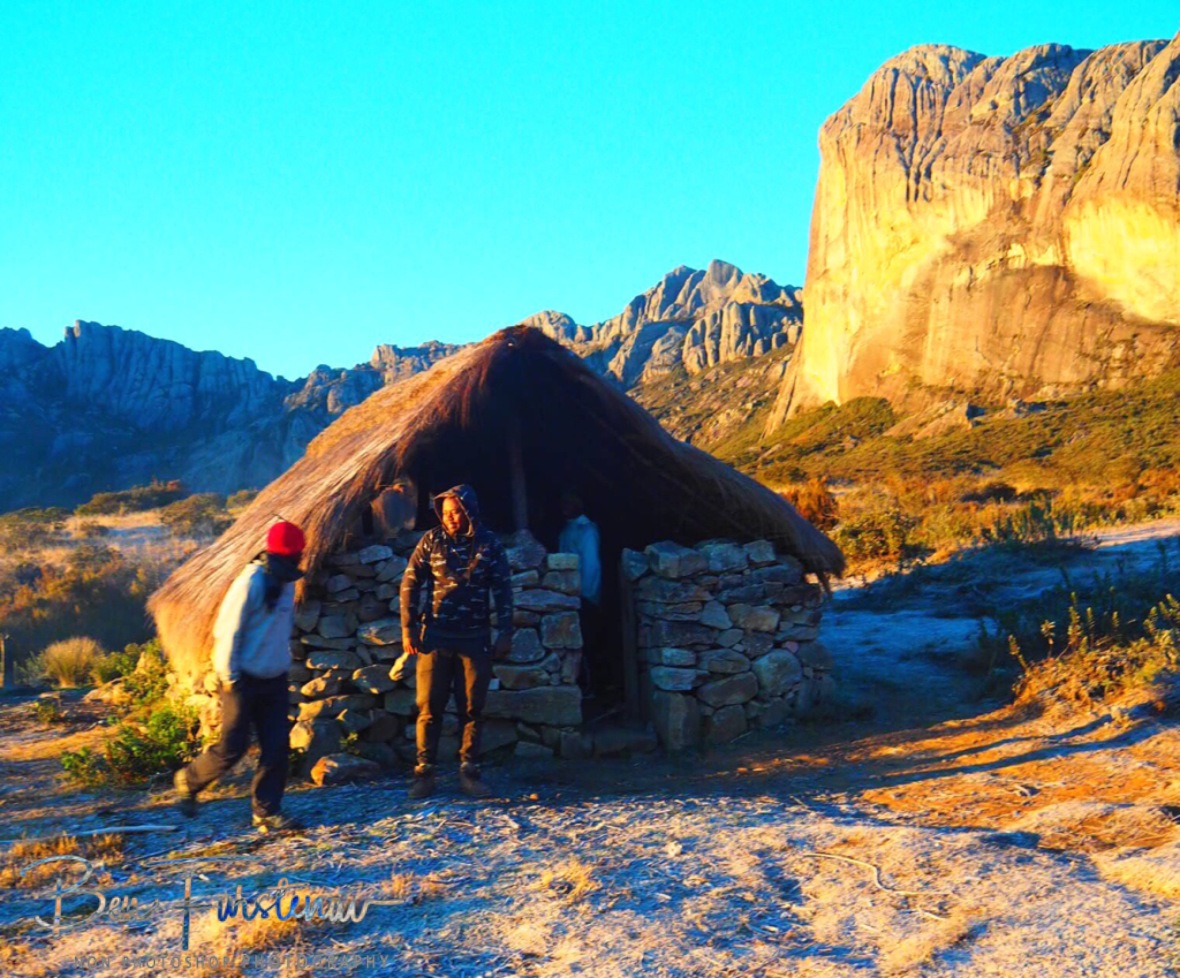 After a fresh brewed hot coffee and some stale bread, I set out with my OM-D. The sun had already thawed up some areas it reached, others were still covered in ice. Cold clear days increase the colours in light, and show up on my photos. Wow. 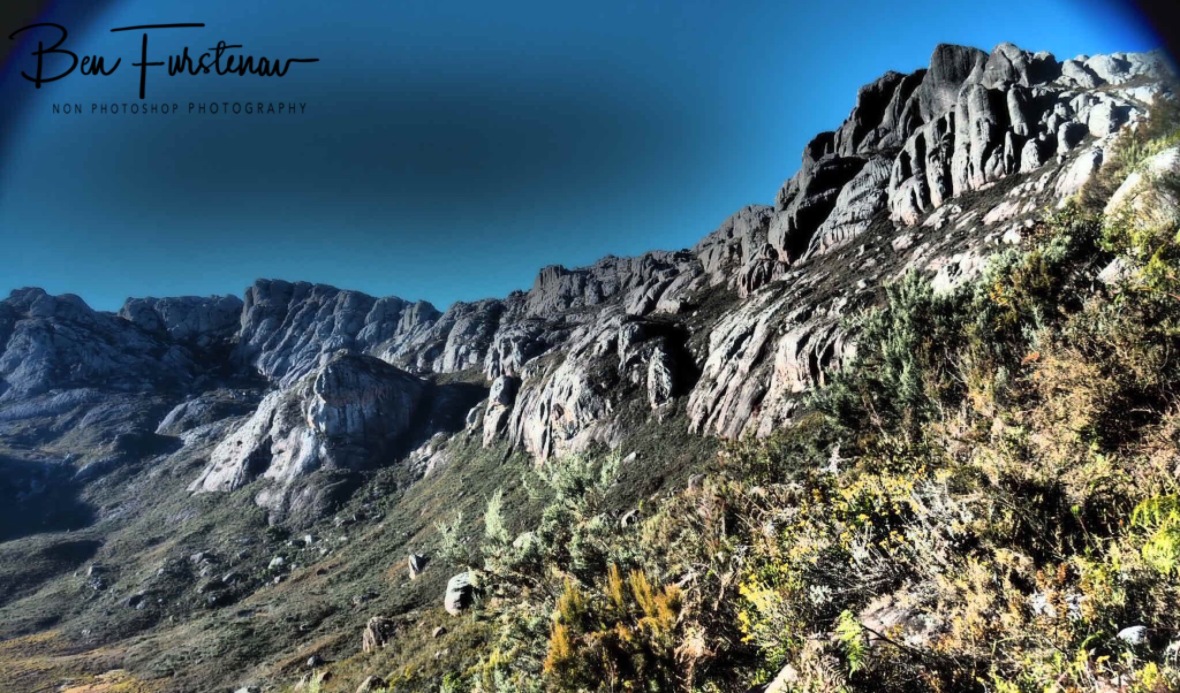 The way over the escarpment

Shortly after, Florie and I were on my way to Mt. Imarivolanitra, also known as Pic Boby. The nickname, or for a long time original name, comes from an early French explorer, who decided to race to the summit with everyone included in his party, including his dog Boby. The race started from the last meadow before the summit and we can all guess who won the race. 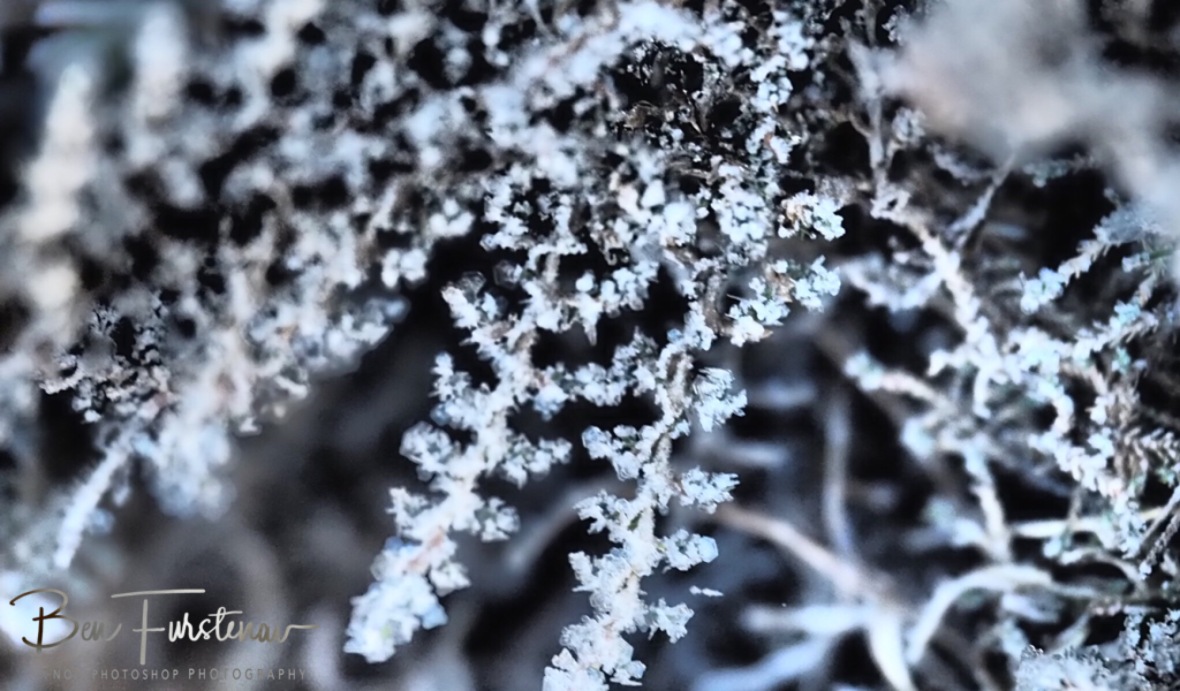 Racing was the last thing on my mind, as I was way too busy exploring this photographic landscape. Florie waited patiently at each stop but I had warned him before. He saw a few of my shots and understood why it’s taking me so long.

On top of the world

We reached the peak eventually, a Dutch couple were already there, only because of our lengthy stops. I heard her whinging loudly last night, about how cold it is. It got very annoying and went on and on.

The view from up top was simply breathtaking and photos don’t compare. It was sunny and completely winds still, which doesn’t happen often up here I would imagine. Again, the weather gods took mercy on my adventure. Florie and I did some early explorer o sing, ha ha.

On our way down, we passed the group of Scotts, some huffing and puffing more then others. I took a few photos on their cameras, a reminder of an amazing achievement.

One of many cascades

A quick picnic and some more shots of the nearby waterfall and Florie and I were of to wander the Malagasy plains. So called by locals, as it goes uphill, and downhill, fairly constant for Malagasy standards. Even with basic English knowledge, Florie explained a lot about flora, fauna and local history. We passed the three rivers of the king, as we passed the three rivers of the queen yesterday. All opted for some cool photos.

One of the queens three rivers

On our long journey, we were even lucky enough to see the very rare alpine chameleon on our path.

Poor thing twisted and turned in opposite direction as I was trying to get a clear shot. With a little help from Florie, who stood in the escape path, I was able to take a few shots and left him on his way.

Resting on the moon?

We reached the so called ‘moon landscape’, which I found didn’t look anything like the moon, but I have never been there either. The moon was shining brightly early afternoon. On our descent to The Valley, the landscape changed in to a rather lush green Palm Forrest.

We watched an amazing sunset over the peaks afar before reaching our camp. Perfect timing, for a perfects day hike. Dinner was again fantastic and I shared experiences with fellow trekkers. Everyone was deeply touched by the whole experience and effort guides, porters and cooks went thru to make this an unforgettable trek.
A few more rums, to literally keep up the spirits and I was off to my cosy home. Even though today was longer and more strenuous, I felt fit again. I did pick up a few blisters, and a few Moskito scratches on my left foot, they looked a bit inflamed, my feet were slightly swollen, without pain though. We packed up early, and made our way to the car. 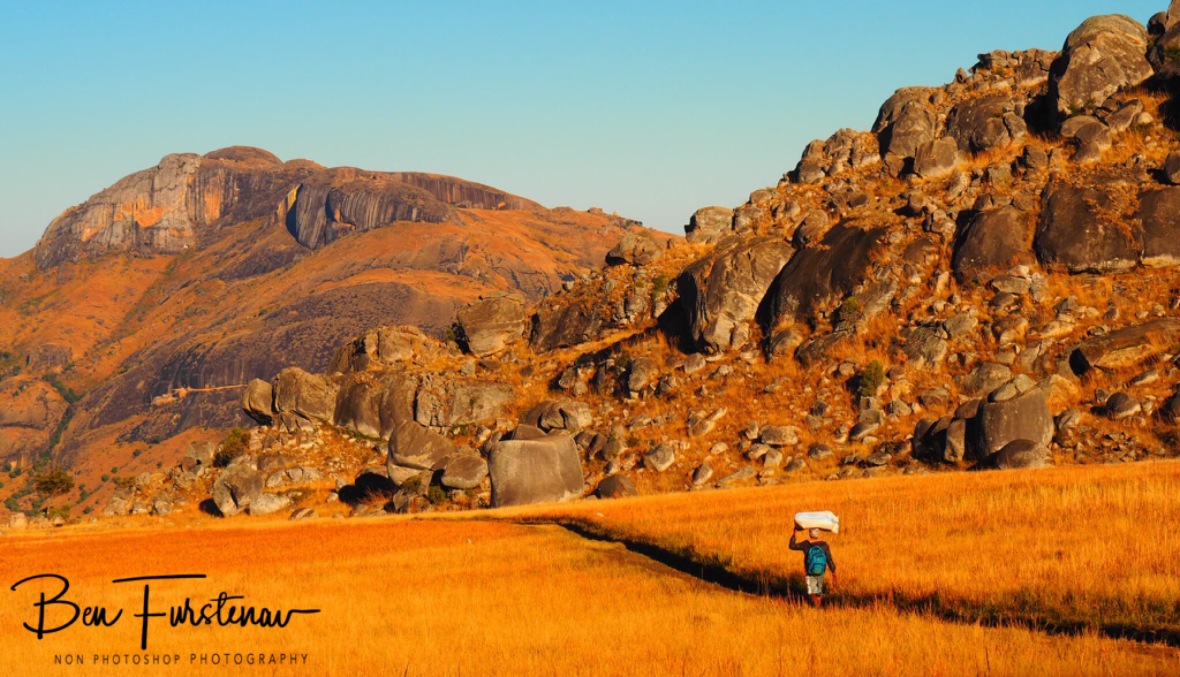 Deba on his way over Malagasy plains

Deba ran off as I was taking a few shots and Lala spent most of the time on the phone, so I left him behind.

Ninah and Odilon were cheering as we reached the Kat Kat, Ninah busy cooking and serving coffee, as always. What a woman.