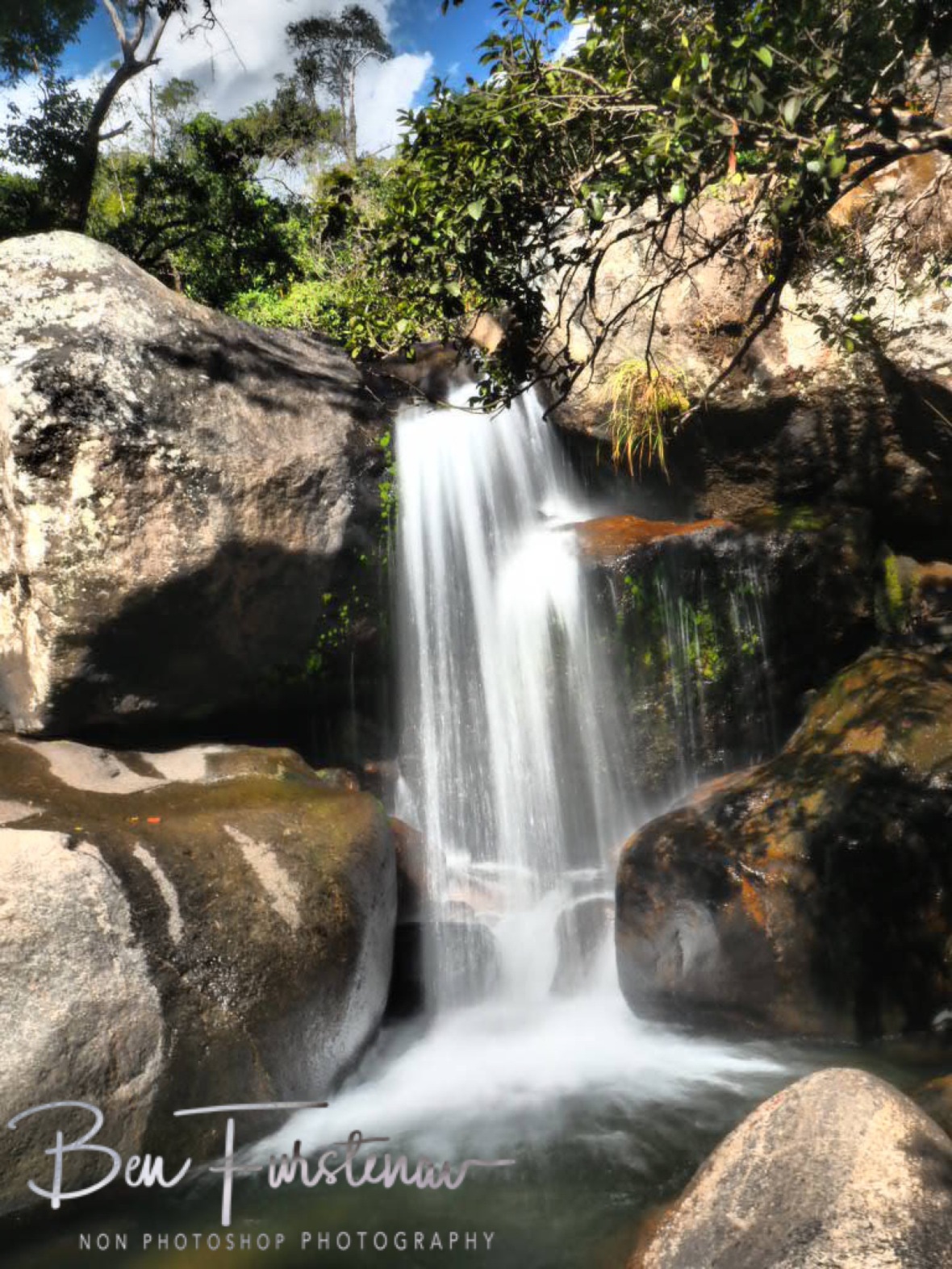 It was a blissful calm morning without any clouds or wind around. A perfect day after all, on my last day in Mulanje Mountains. 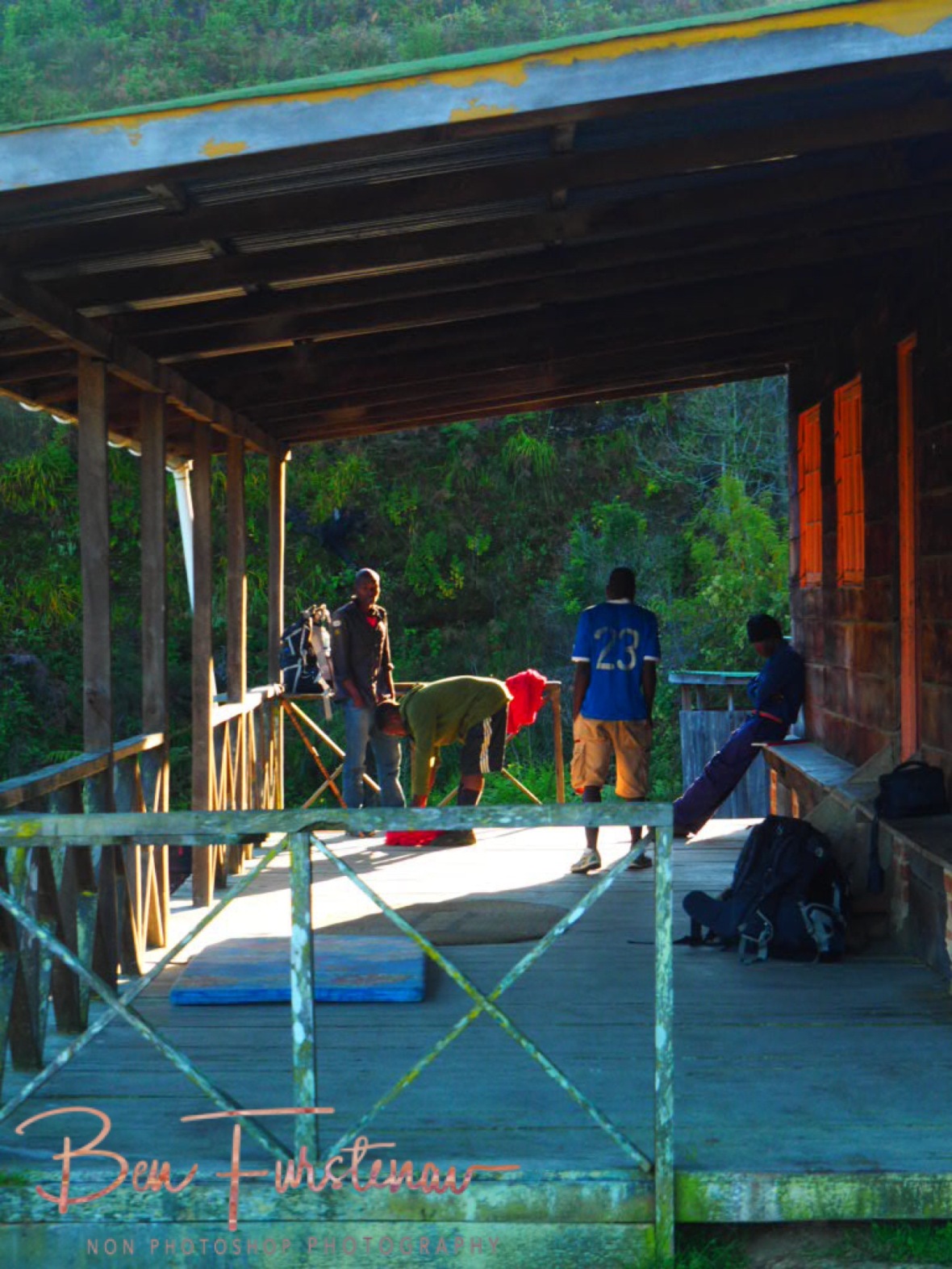 Everyone is ready apart from me, Mulanje Mountains, Malawi

After packing up, I got a bit annoyed. With myself, and with Nenani. We should have taken time to climb up Mt. Chambe.

Days like these don’t come around too often. I should have thought about it earlier, but what I expect from a good Tour guide is to think about these things.

A perfect day to hike to the top off Mt. Chambe, Mulanje Mountains, Malawi

He should have at least suggested to climb up Mt. Chambe, we had all day to return after all. He seemed fairly keen to get back down the mountain.

Following the descending creek into The Valley, Mulanje Mountains, Malawi

We walked the waterfall track down, following this creek into the valley below. 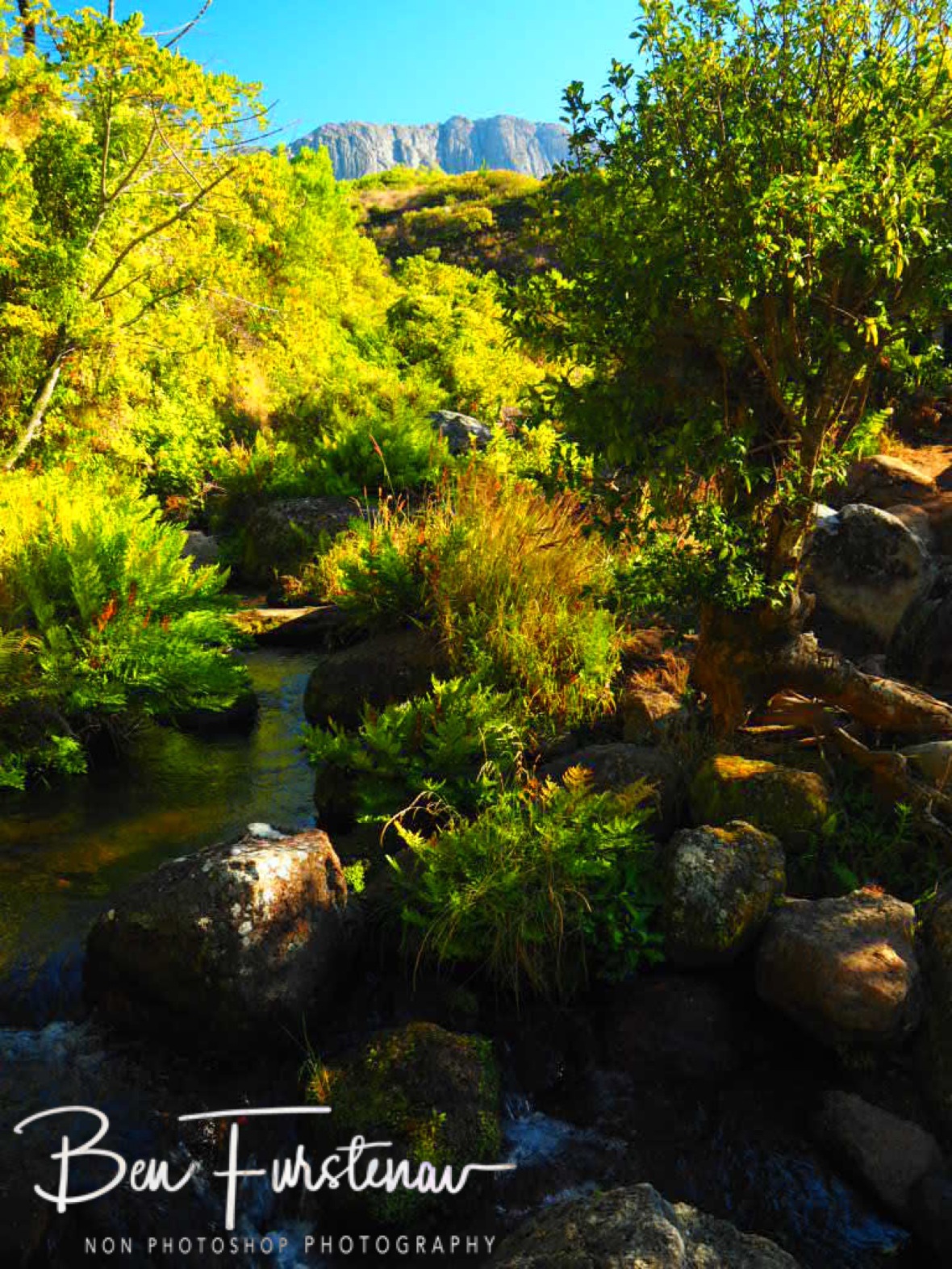 With full sunshine, the meadows looked even greener.

Flowers in the sun at Mulanje Mountains, Malawi

The sunshine exposed some colourful flowers and plants.

There were a few viewpoints to the valley, next to some cascades. 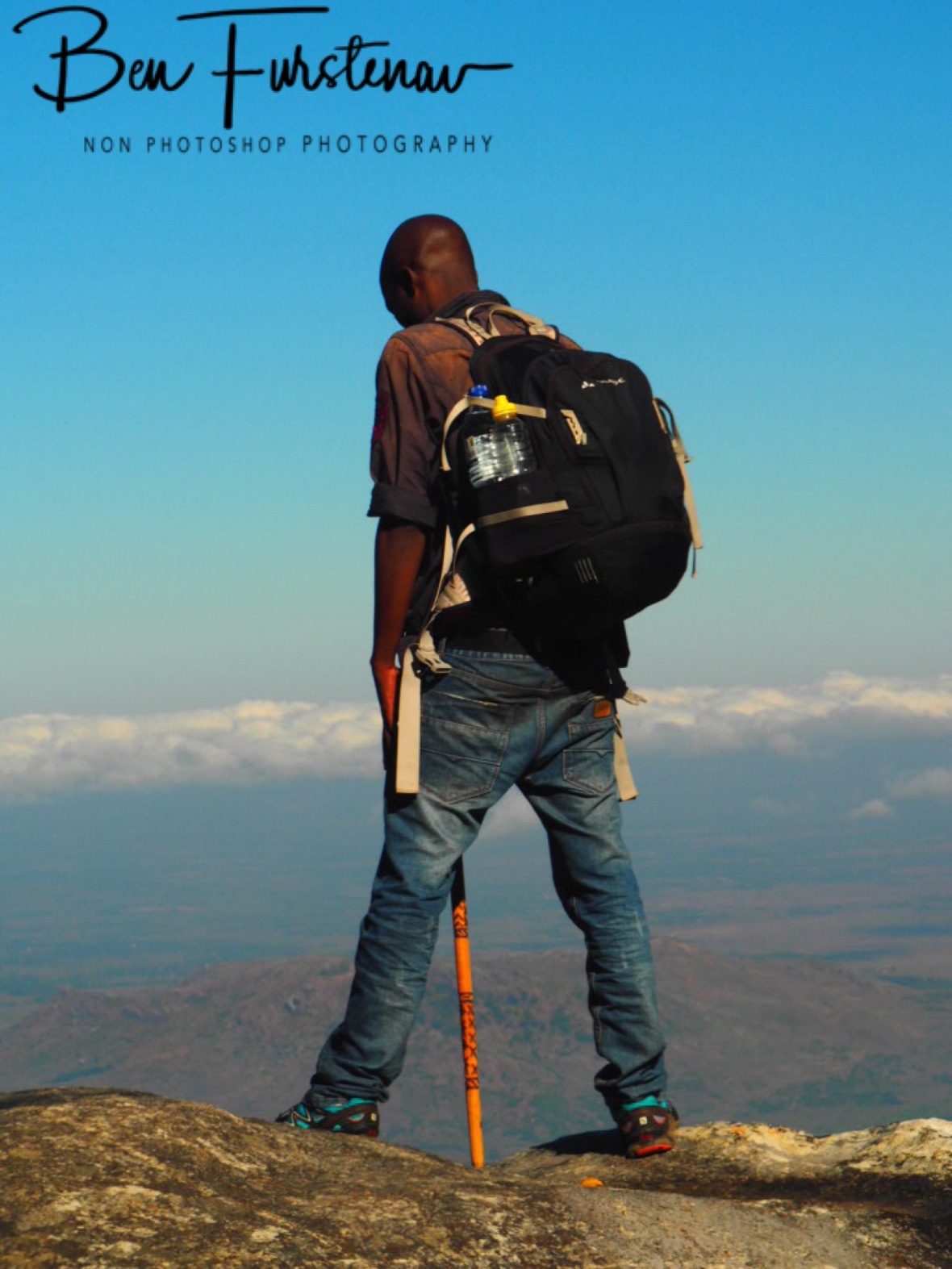 Nenani was still miles away, which is really starting to annoy me. Why did I choose him as a tour guide?

Dziwe Wa Nkalamba waterfall is the main attraction here, lying on the lower slopes of this descending gorge. The sun was still low in the sky and shone straight into my lens, I couldn’t take any photos. 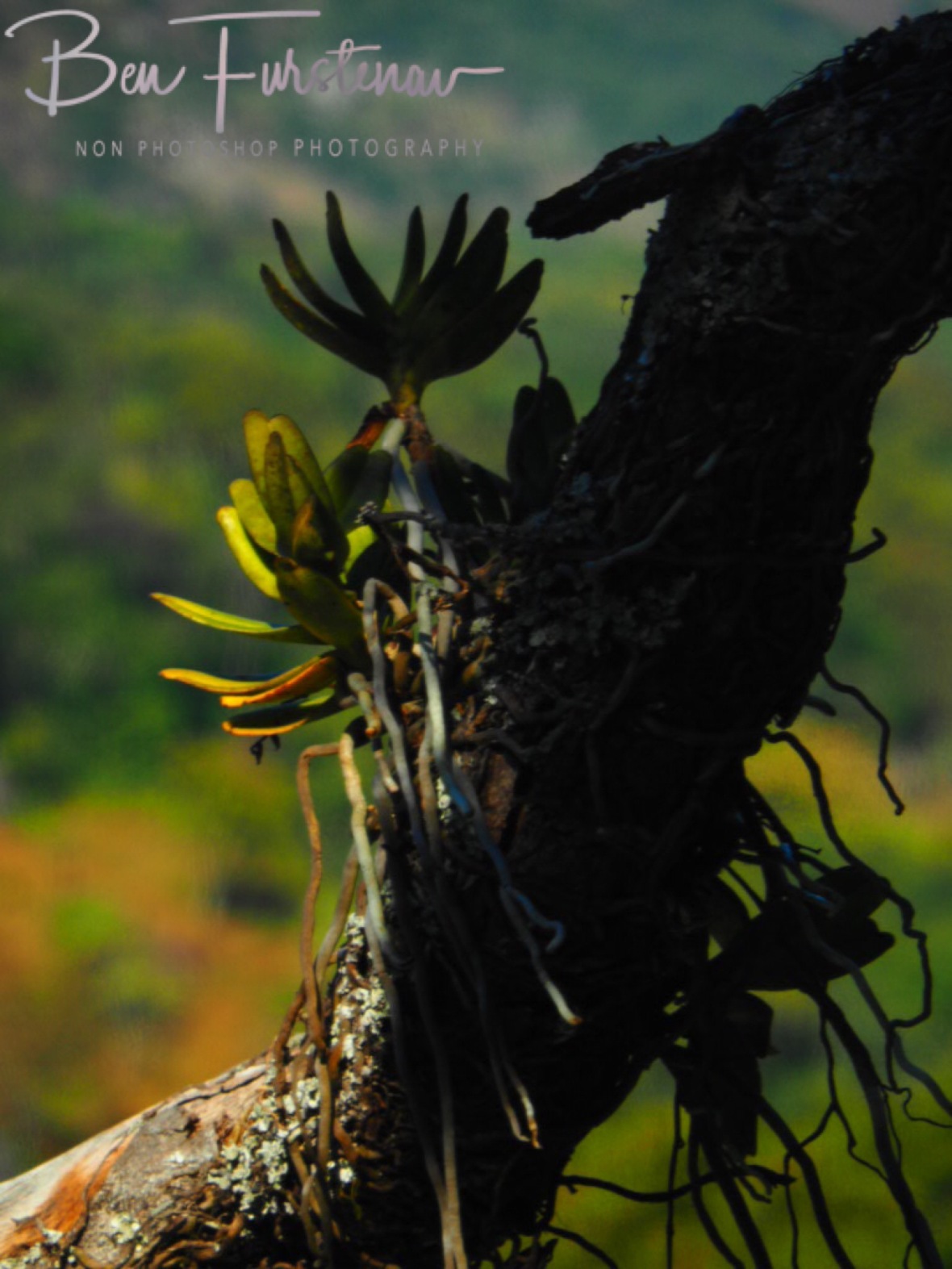 I asked Nenani over for a chat, I had to sort this issue out.  They expect a tip at the end of the journey, I gave him the following tip. I explained to him, that as a tour guide he is responsible for the well being of his hiking party. He is in charge, he is the show master and needs to respond to his audience accordingly.

I said on the very first day that I am interested in culture, history, flora and fauna of Mulanje Mountains. Today, he should have at least mention to hike up Mount Chambe, and not hurry down the slopes. His eyes widened in a shameful way, as he finally opened up. He is thankful for my honest words and said that we need more honest people like me.

He, and all other tour guides could learn to entertain any hiking party through these mountains, safely and well. He hasn’t learned much as he dropped out of school early to look after his sick mother, infected by the HIV Virus from his father after a drunken night out. He told me he really wants to go back to school but doesn’t have the means for it, no one really does. He did ask me if I could sponsor him. I said I see what I can do. Maybe I can find a sponsor through this post.

Learning young the art of survival in Mulanje Mountains, Malawi

And just like that, he smiled just like any other friendly Malawian, a load came off his shoulders. I just wish that happened at the beginning of our trip.

We ran into a traffic jam shortly after. A group of women and kids had been out  collecting firewood to sell in town.

The wood is tied together and carried on their head all the way back down.

This hardwood is heavy, a break is well deserved.

Zimba under and with ‘Frangipane Flowers’, Mulanje Mountains, Malawi

Arriving back at Zimba, someone carefully decorated him with fallen Frangipani flowers?! He must have felt a bit neglected the last four days. Nice to see him well and happy too. 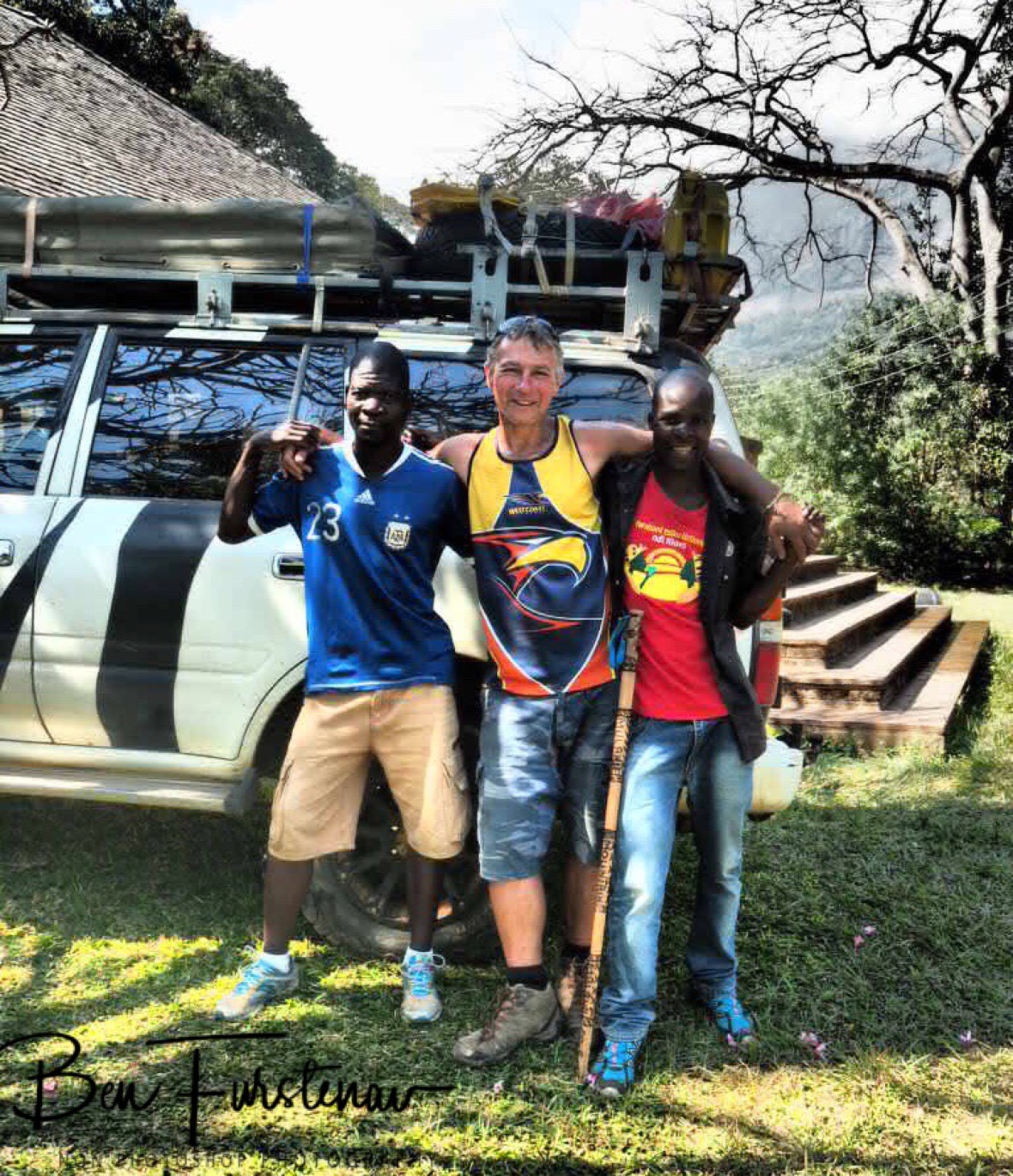 We took a group photo with Nenani and Charles, who both looked happy… and probably relieved to be back home.

After lunch, I decided to hike back up to ‘Dziwe Wa Nkalamba’ waterfall, the sun would be shining on to the falls by now. The ancient story goes, that a person, no one knows if a man or woman, sits on the rock alone. As soon as someone comes to visit the falls, the person jumps into the 60 m deep pool and only emerges after the visitors had left.

Just before reaching the falls, an ancient sacred site appears. In times when rain was dire and therefore the land didn’t produce much food, the folks of old would leave food in clay pots for the gods to eat. With little food already, this was a big sacrifice. If after a few days the food was gone, the gods accepted and sent out rain and better times. This ritual is not relevant in present times, clay pots have been destroyed over time, the area the main attraction due to the falls. Shame. 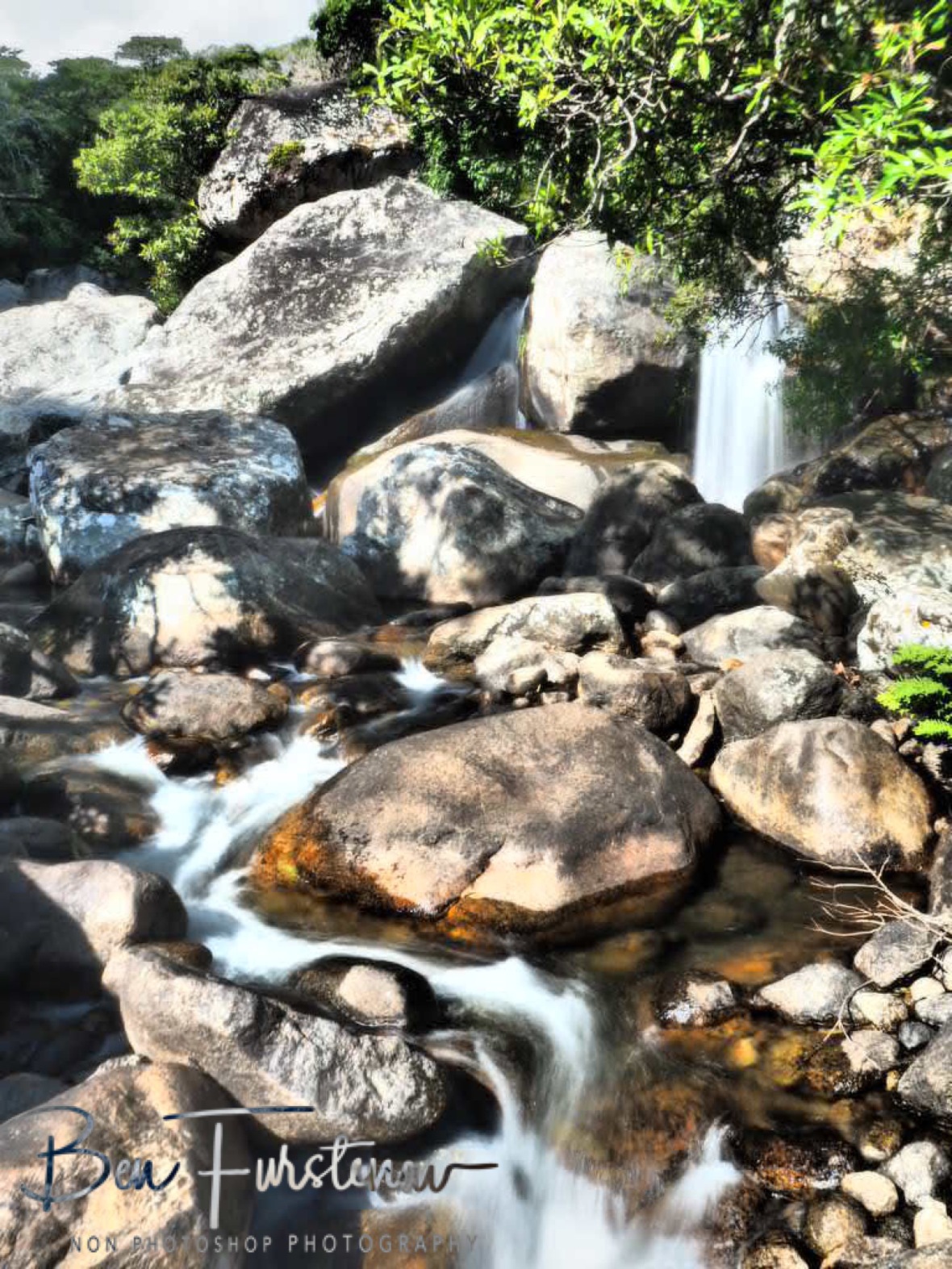 But, I turned off too ‘early’ towards the river and ended up scrambling over boulders and through thick bush to reach the main Falls. 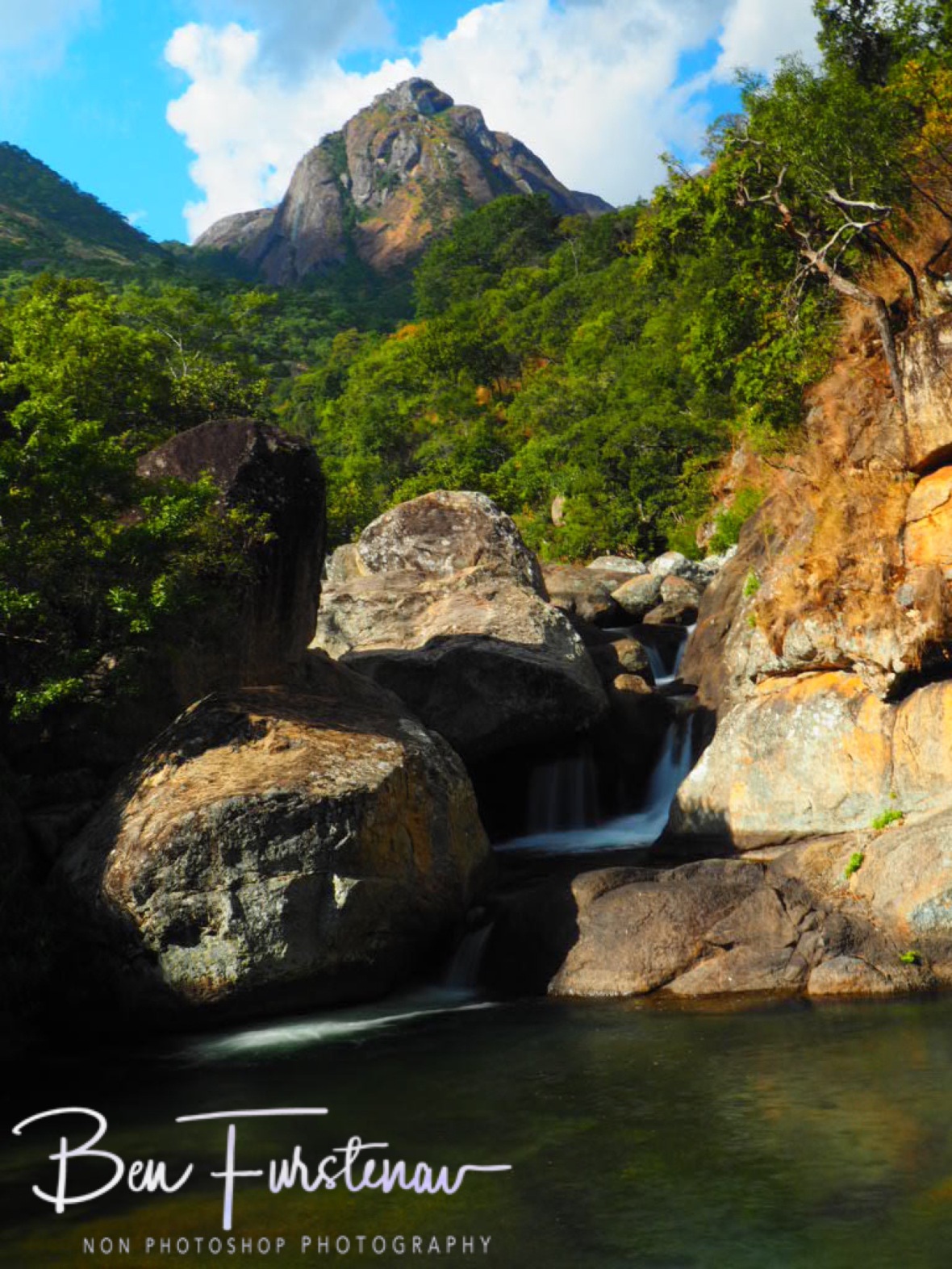 All along were smaller falls and cascades, and a great view towards the valley,

Flowing straight into the valleys below, Mulanje Mountains, Malawi

the waters seemingly drop right in too. It was a funtastic little adventure, working out which way is best to cross the river and how to get up to the next level. 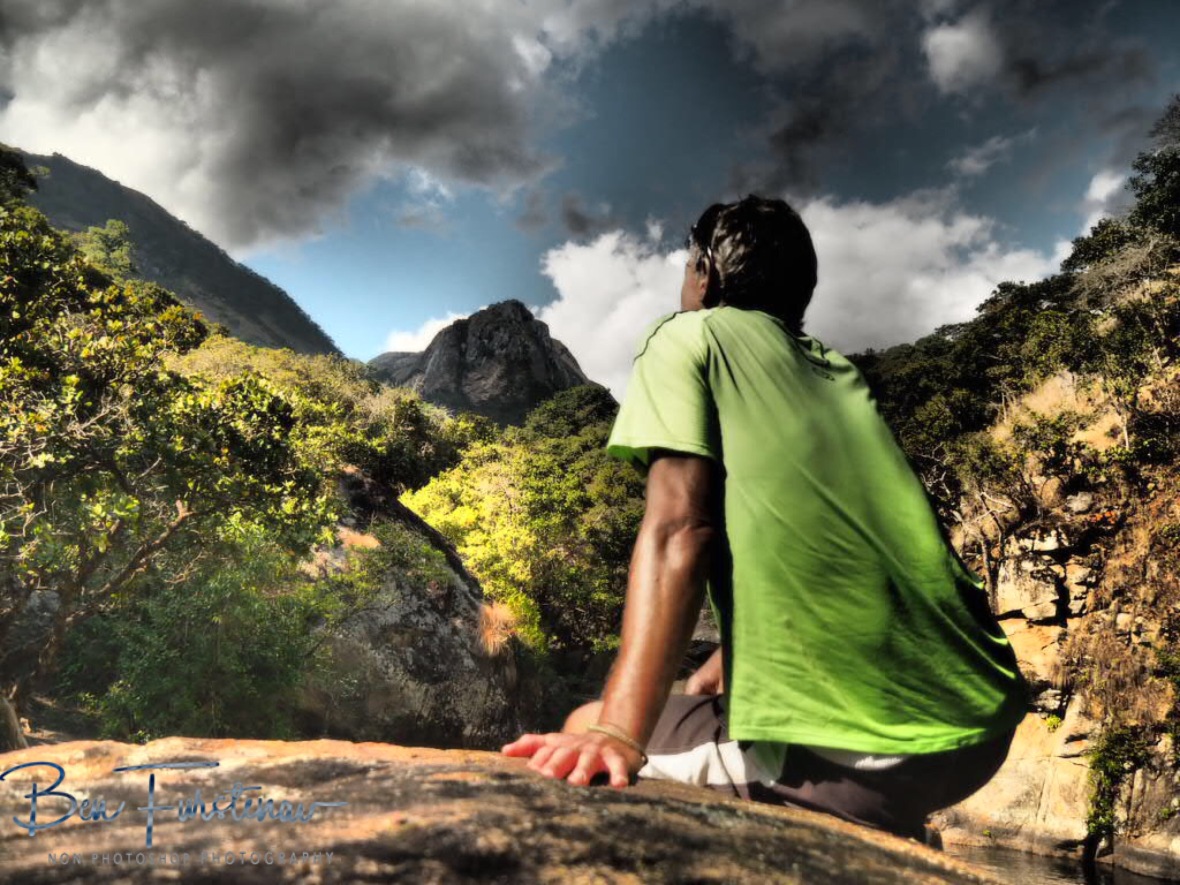 No one around, peace and quiet. 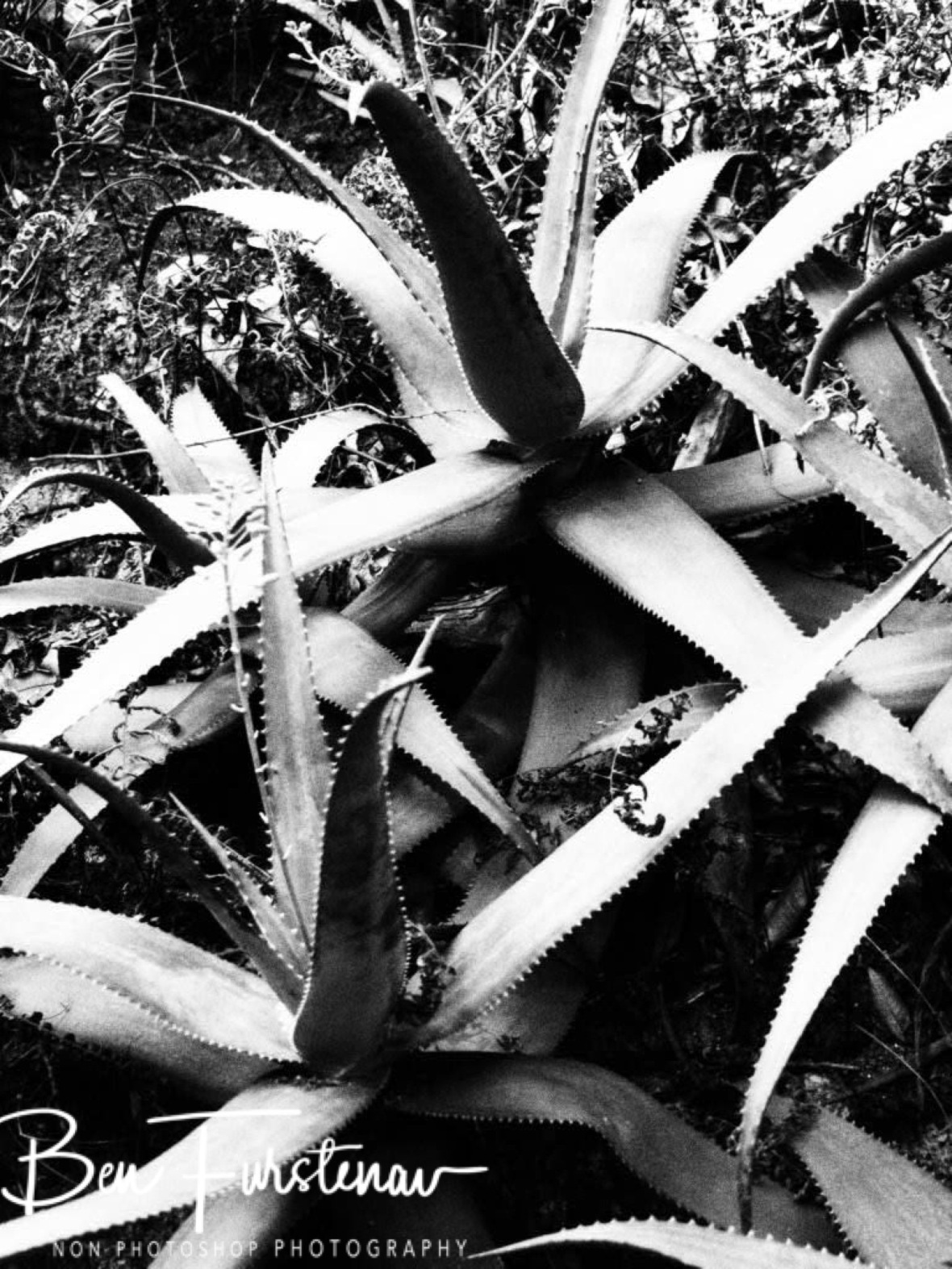 Perfect to relax and to smell the Aloe Vera. Pure bliss. 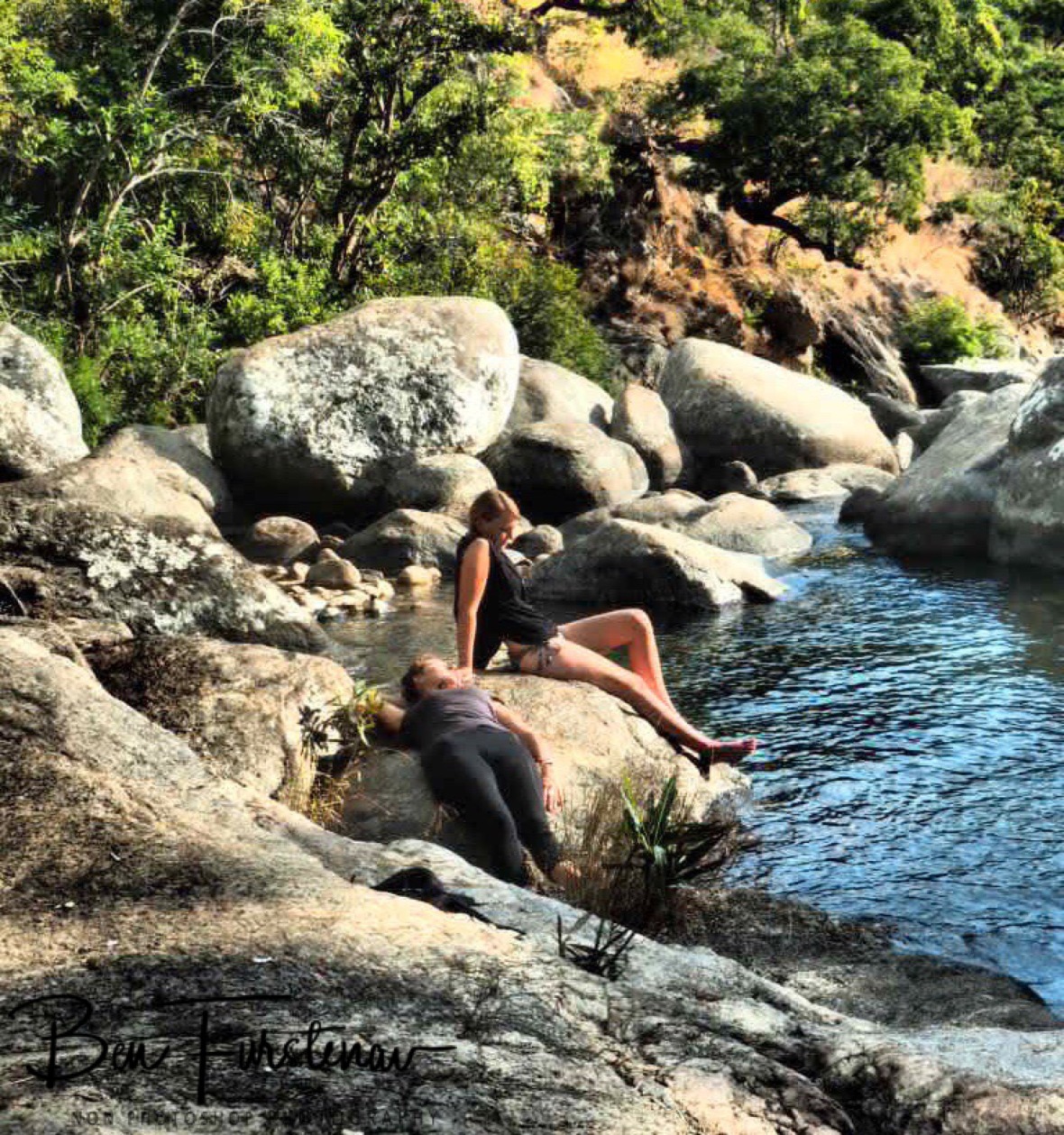 Reaching the main falls at the same time as Anna from Italy and Teresa from Germany, who arrived with a local guide.

I went for a refreshing skinny dip in cold waters, no other ‘person’ to be seen.

The girls enjoyed the serenity and the sunshine.

We walked and talked back towards the CCAP mission together, until I fell behind taking photos of the mountains around me, in low setting sunlight. 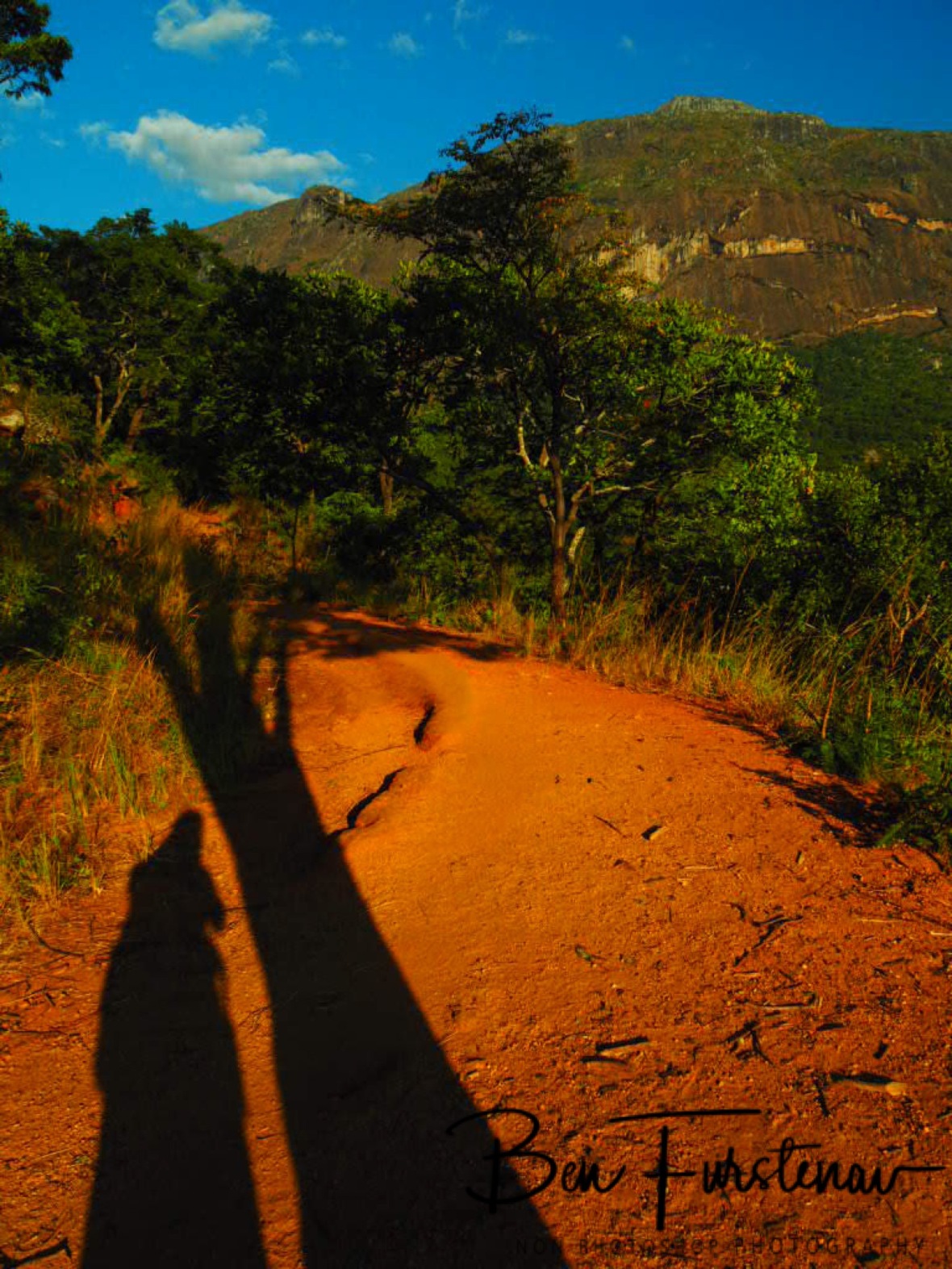 Long shadows appeared on the track, 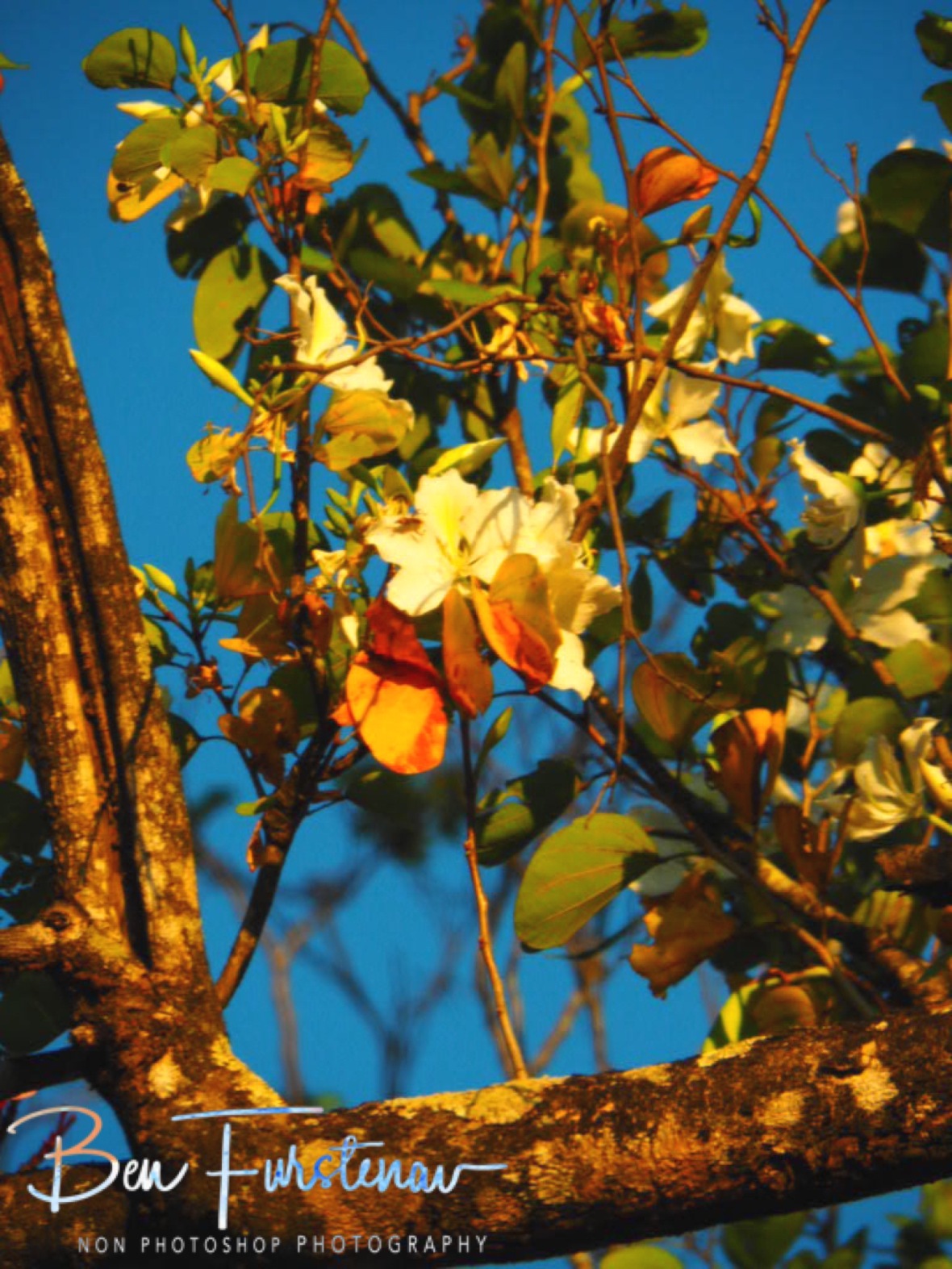 whilst flowers shone in blue skies. 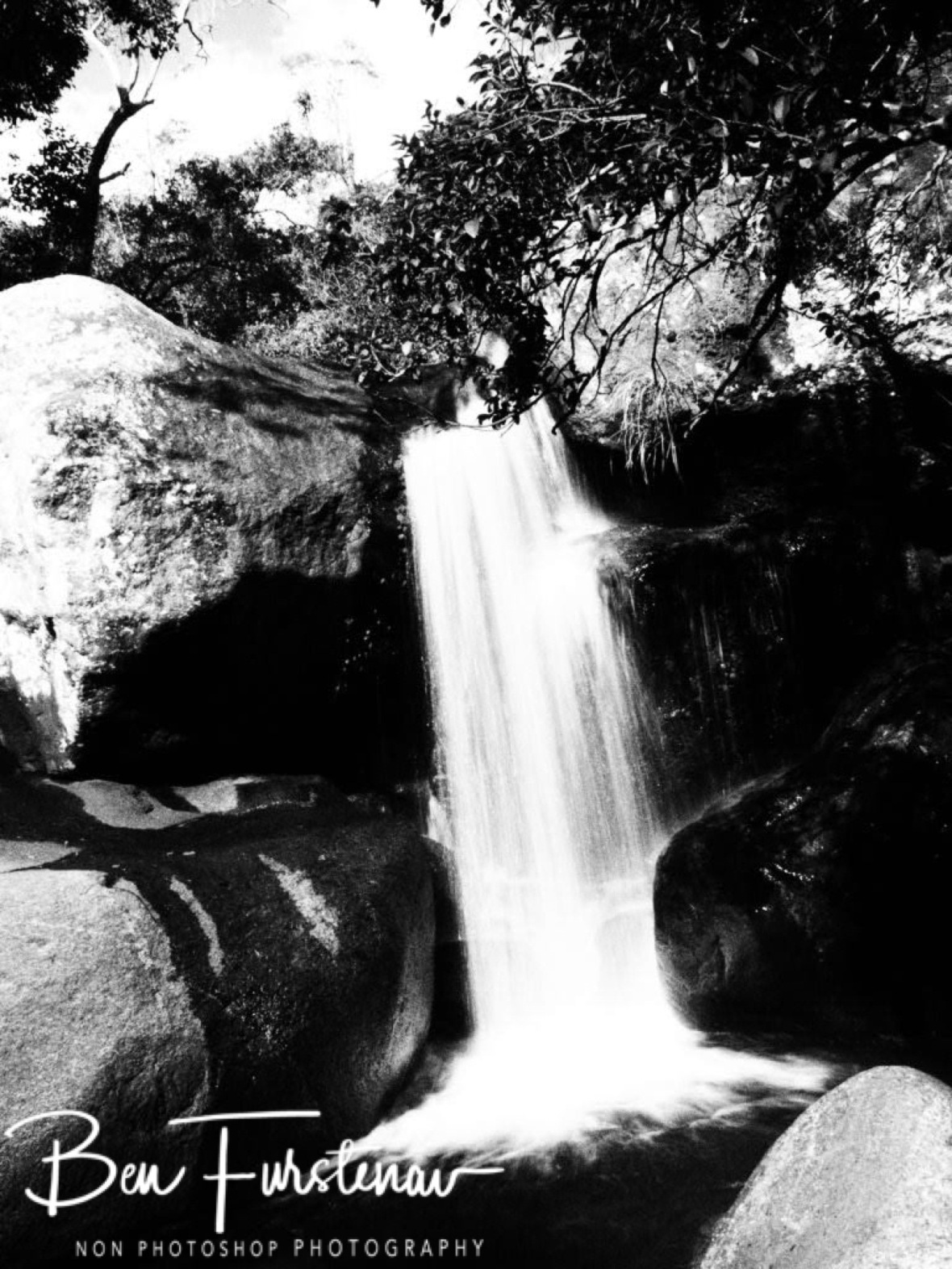 Nenani came for a visit next morning to exchange internet details. As he signed my flag, he said that when I pass his shop, that I could choose a painting as a reminder of him and Mt. Mulanje. What a nice gesture. I had thought overnight to leave my magic walking stick with him, as a reminder to smile more often. The stick had my name and exact date engraved meanwhile. It will be of better use with him, and besides, I wouldn’t be able to bring it into Australia.

Stay well and happy my friend, hope these mountains will treat you and your family and guests well.

I really hope that he will be able to go back to school, to learn a profession he will be able to do in older age. I am working on sponsor details, but if someone, anyone wants to, or knows someone to sponsor Nenani for a couple of years, then please get in touch with me.

4 thoughts on “The return off Nenani, Mulanje Mountains, Malawi”