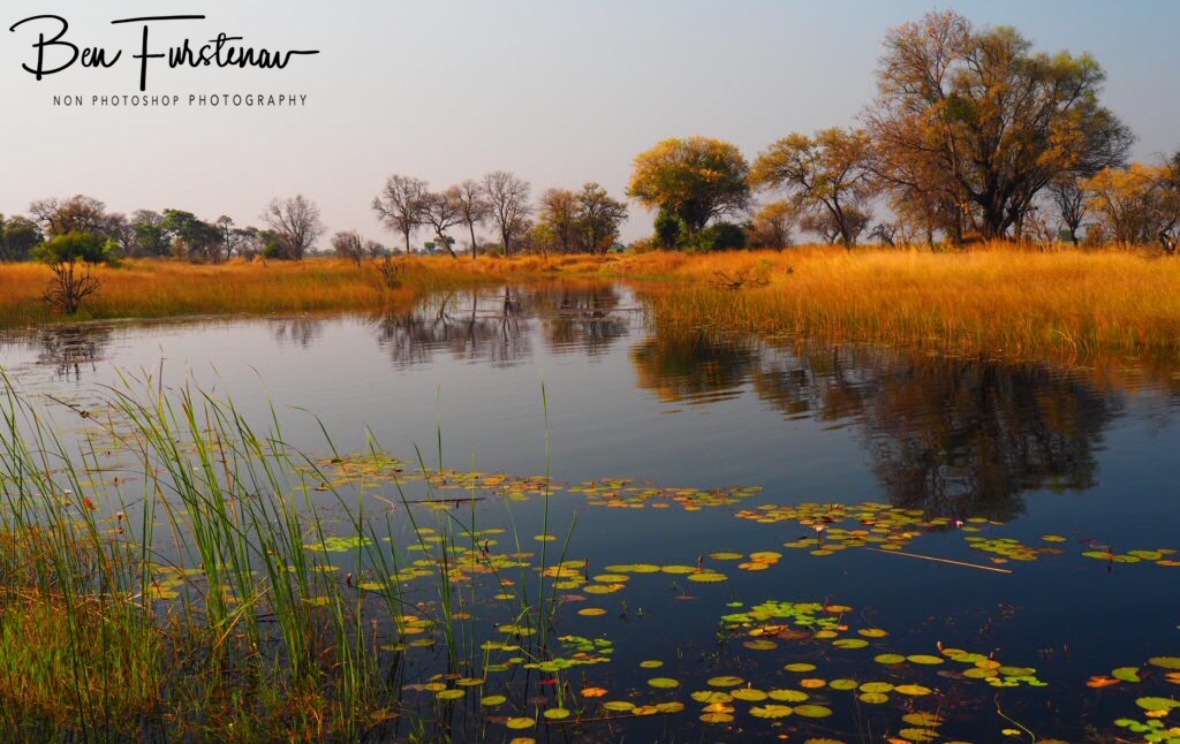 Arriving at the community campground just north off the entrance to the National Park, the setting was perfect for another wildlife spectacular. 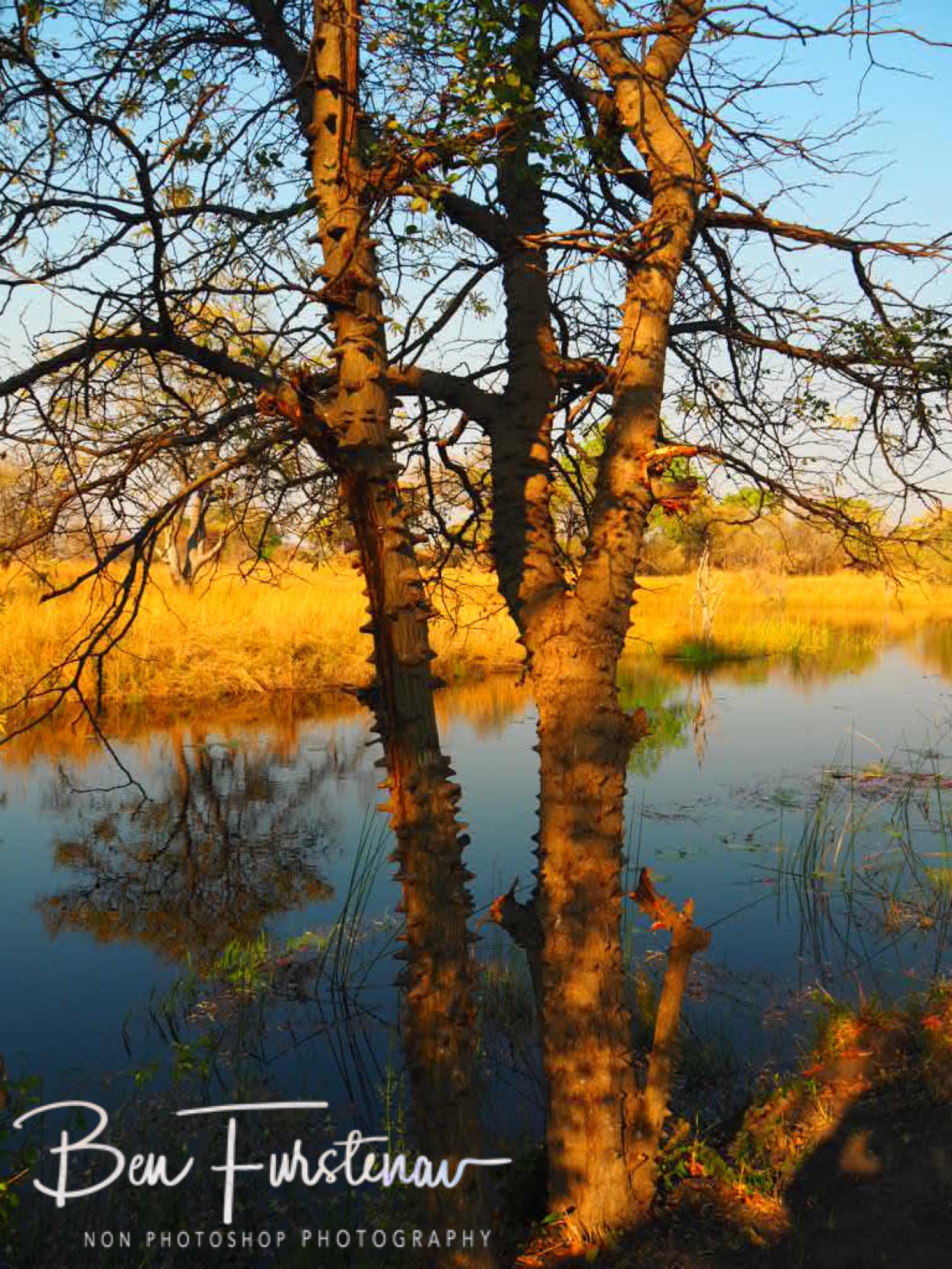 Many trees have their own defense system st Nkasa National Park, Namibia

The campsites are dotted along the Rupara River, a tranquil and scenic setting. Nkasa Rupara National Park lies opposite Botswana’s Linyanti swamps, which was teaming with wildlife. Hopefully, it will be the same here. It was hot and I picked a shady spot under a large tree. Lighting the bush tv, I shone my torch through the water channel and high grass. Maybe some wildlife would show itself, but that didn’t happen. The frogs were happily croaking. 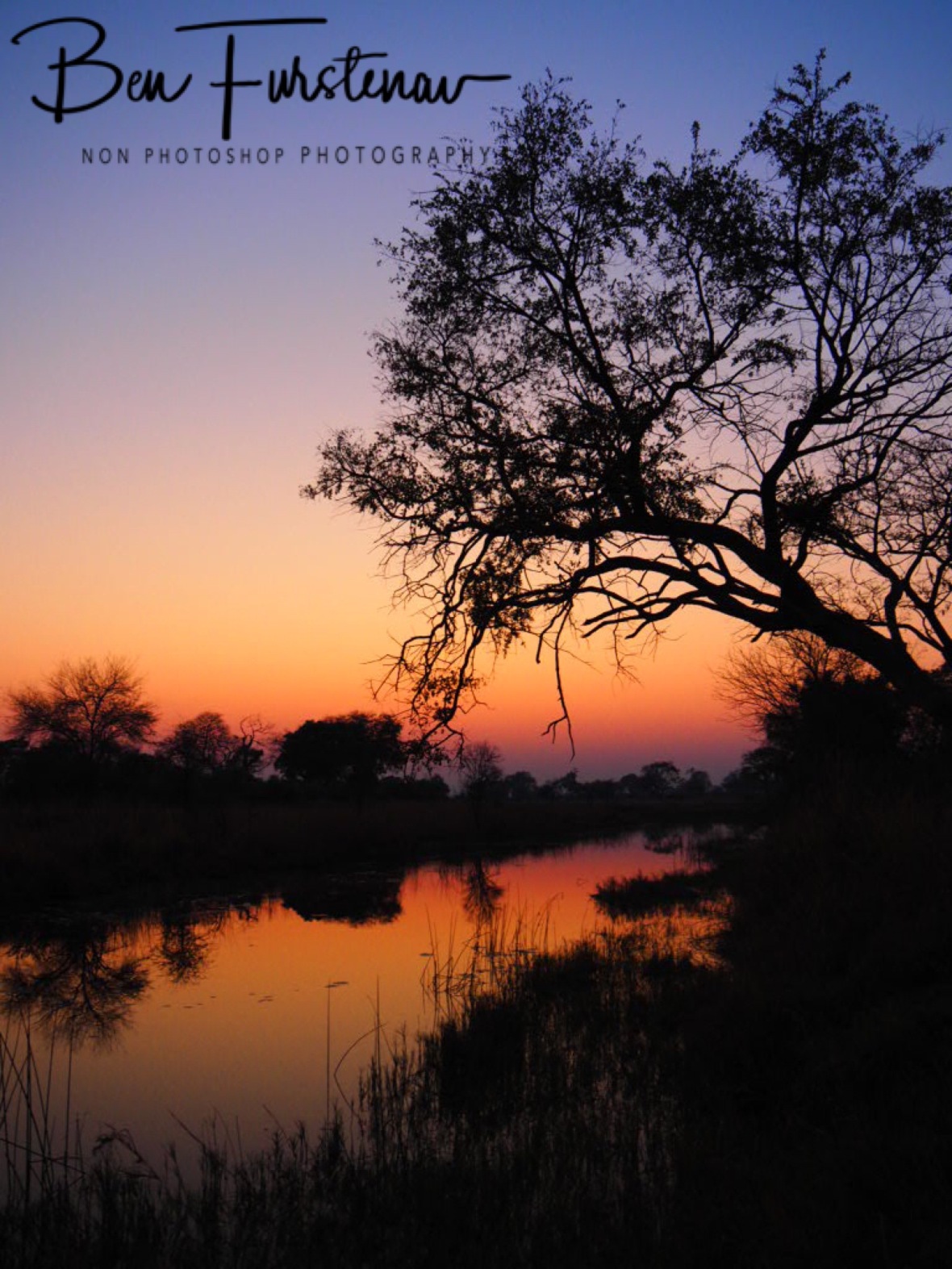 Early morning start again, I was anxious to get out. 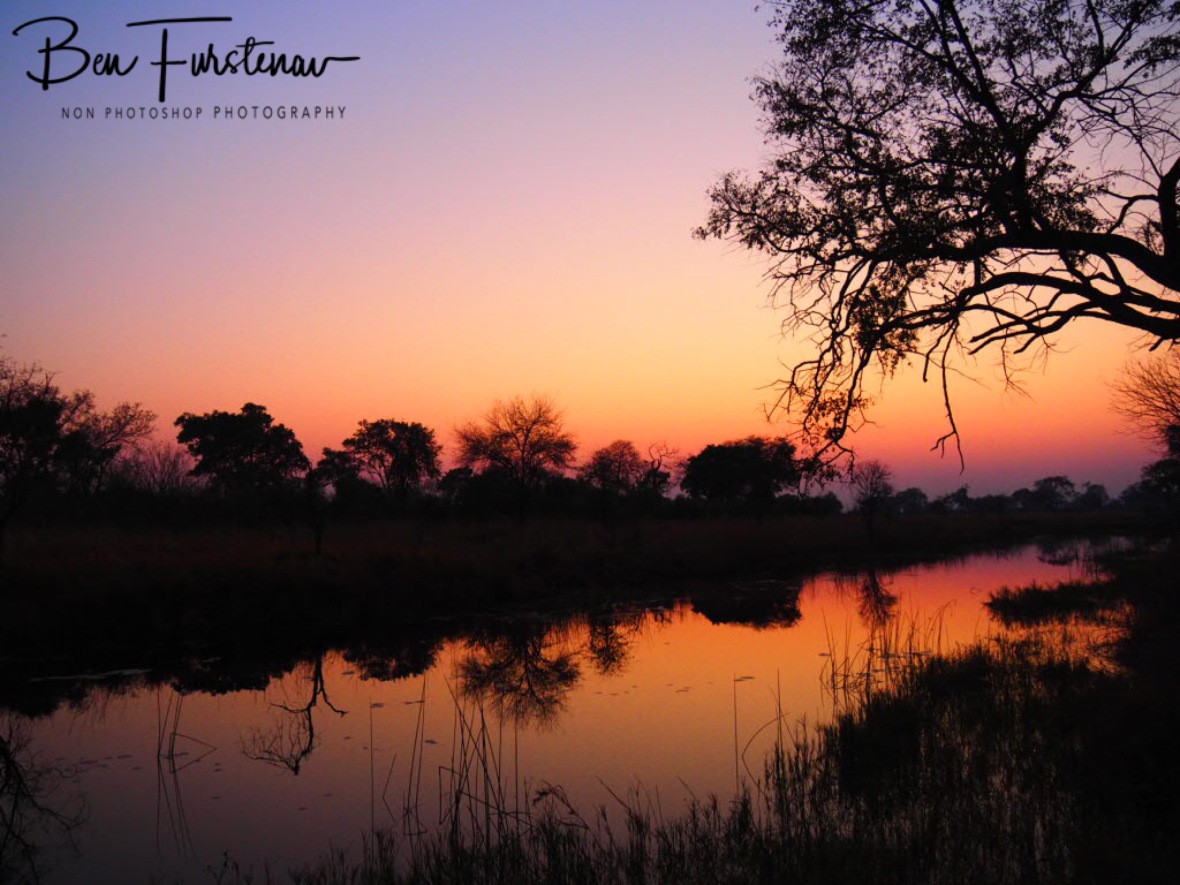 A stunning start to the day. 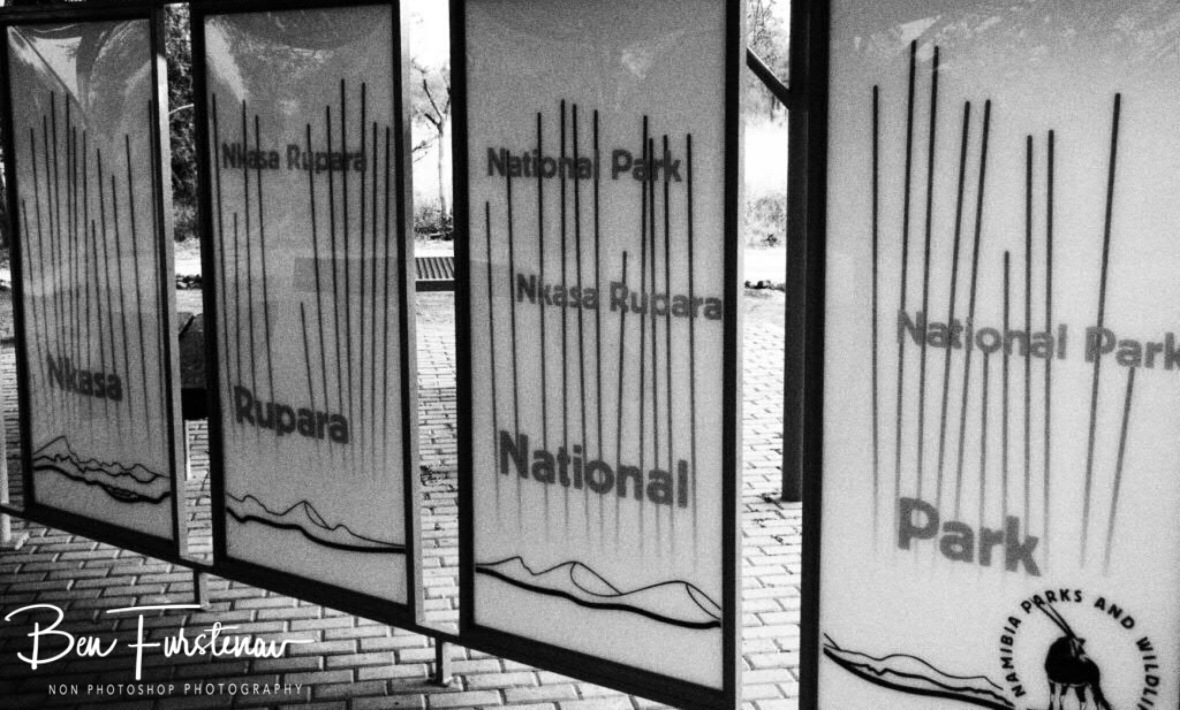 Arriving at the gate, no park warden was to be found. 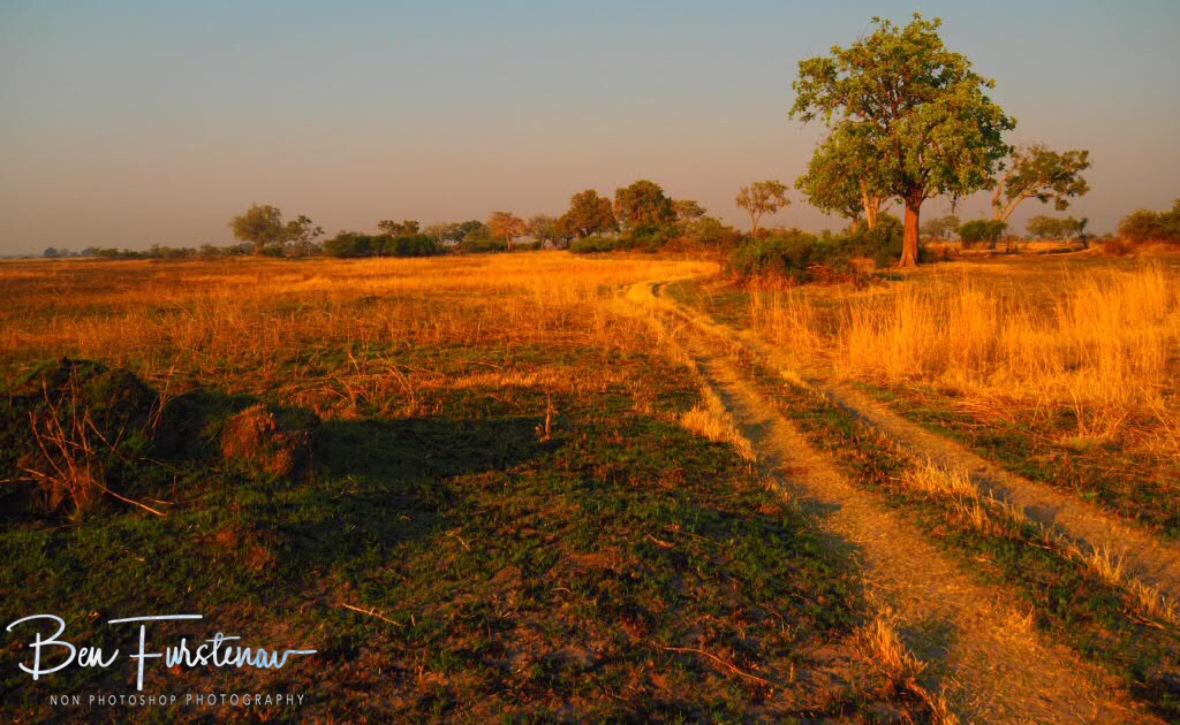 Higher elevated tree-lined islands around high grass, which becomes a swamp in the rainy season. Pumba and many other of his families were abundant, the odd small Impala heard showed as well. But that was it. I crossed a few knee deep channels surrounded by lush green grass out west. 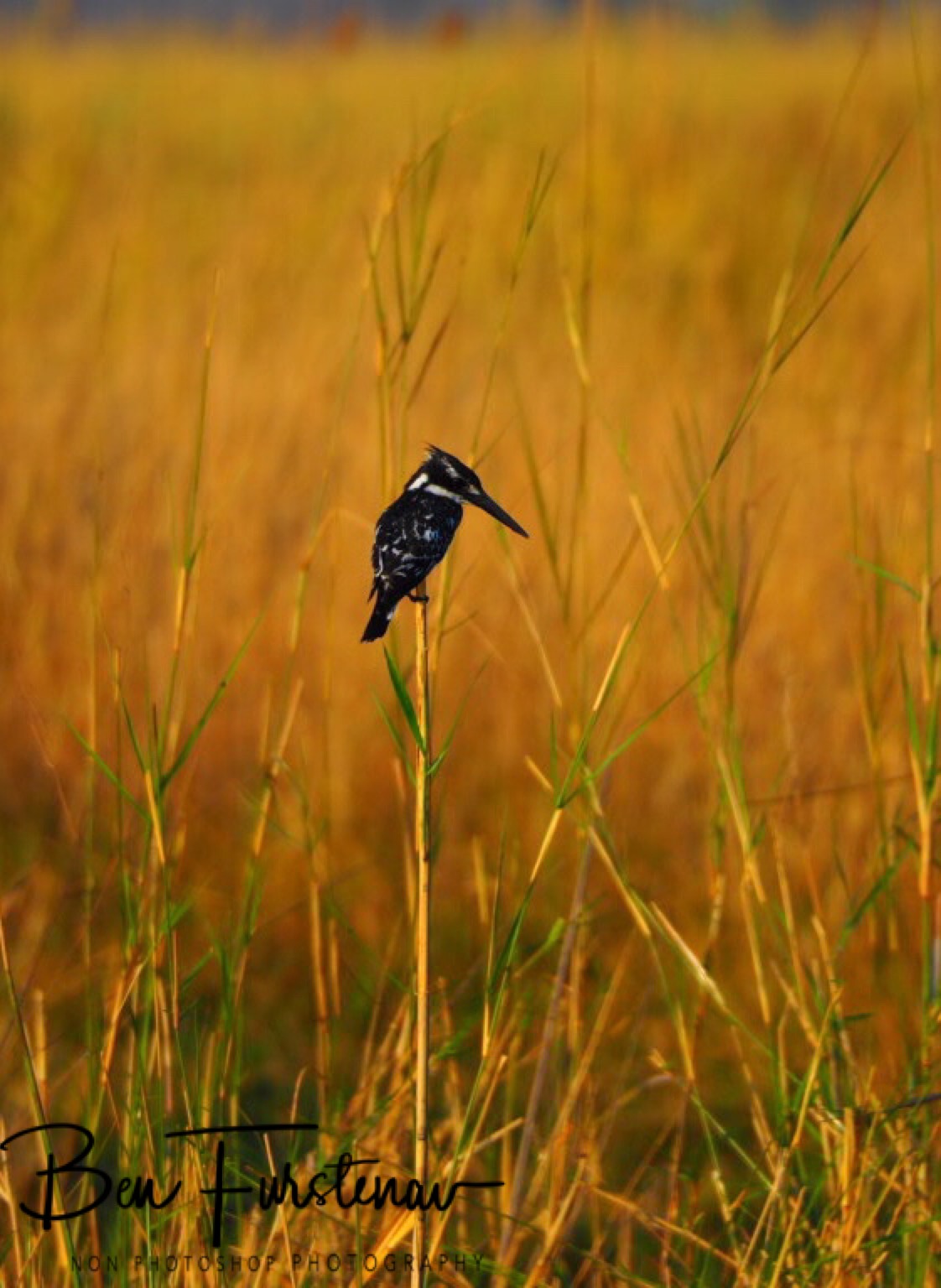 He was sitting there for a while, Nkasa National Park, Namibia

A lone kingfisher was on the lookout. Apart from that, Nada. I was a bit perplexed, as this is the perfect terrain for grazers and hunters. A dead buffalo laid on the side off the track, still fully visible in fur coat and shape. He either died off old age, or my guess, the deadly ‘foot and mouth’ disease. No jackals, no lions, not even vultures were feasting.

This is all very strange. I turned around east and hoped that there would be more wildlife sightings on Rupara Island. Cut off and surrounded by flood waters in summer, surrounded by channels, waterholes, and swamps. A different scenery in the dry season, I was hoping for an abundance of animals. I drove all the way down to ‘Mamil’ Camp, close to the Park boundary along the Rupara River with exactly the same result. 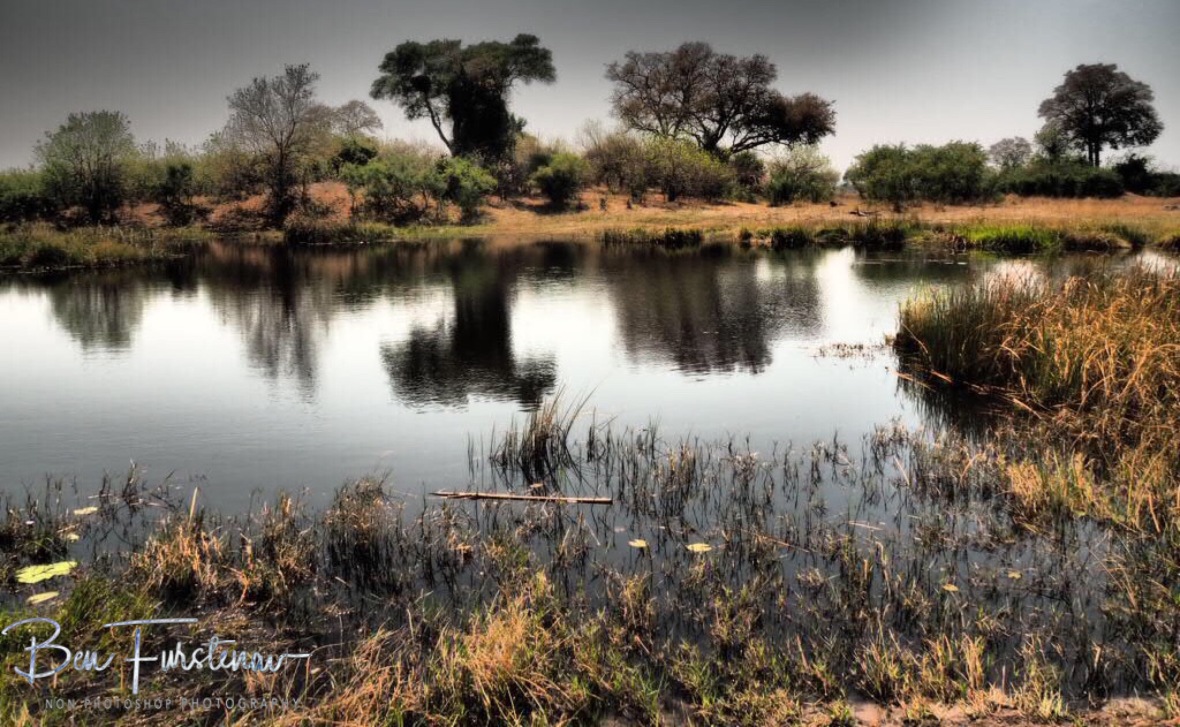 The waterways were deserted, no hippo to be seen or heard. Not even birds were around. 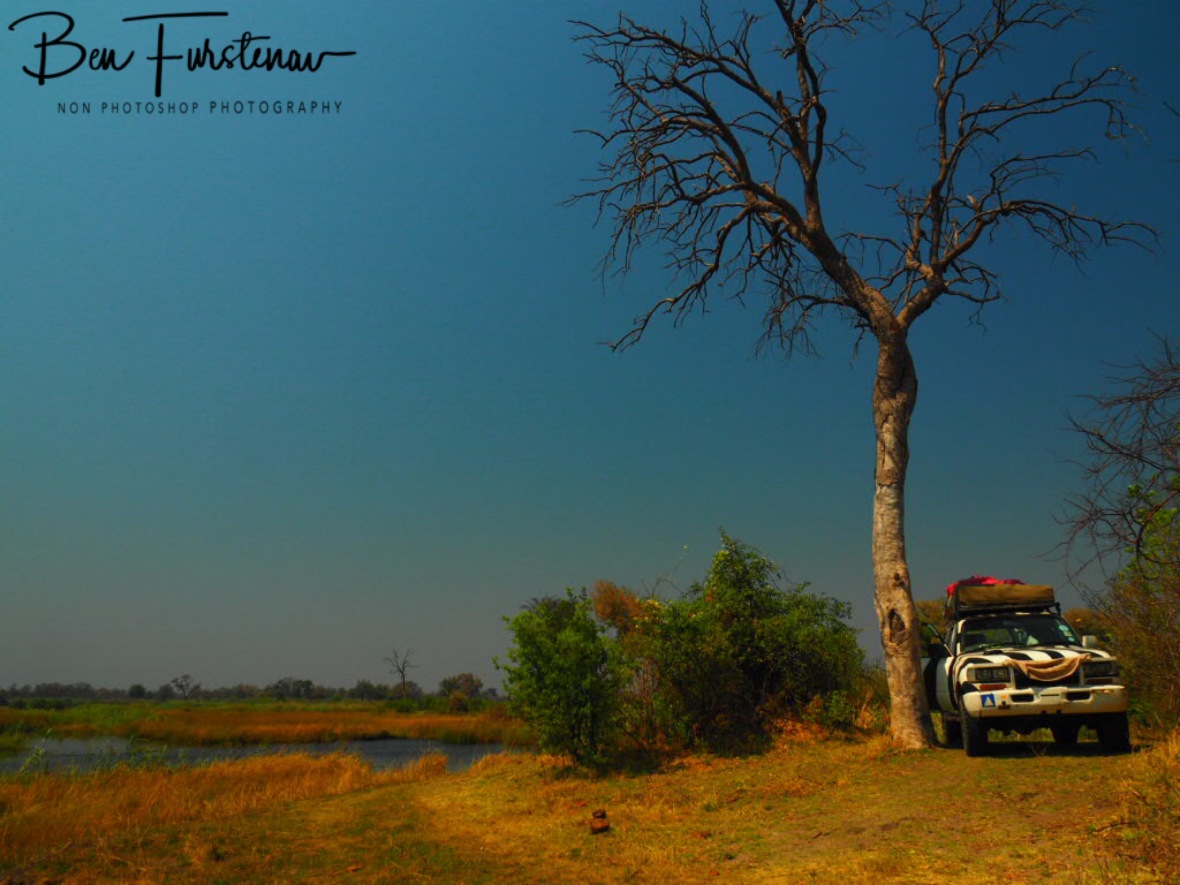 Oh look! There is a zebra!, Nkasa National Park, Namibia

Zimba was the only zebra near and far. Yes, I know, I know. Herds move around and one has to be at the right spot at the right time. But to me, it appears that most animals sought shelter over Botswana’s boundary. Poaching still is a major issue in Namibia. Wealthy Mzungu can obtain expensive hunting licenses to shoot prized animals, whilst traditional food hunting for the native tribes are forbidden. 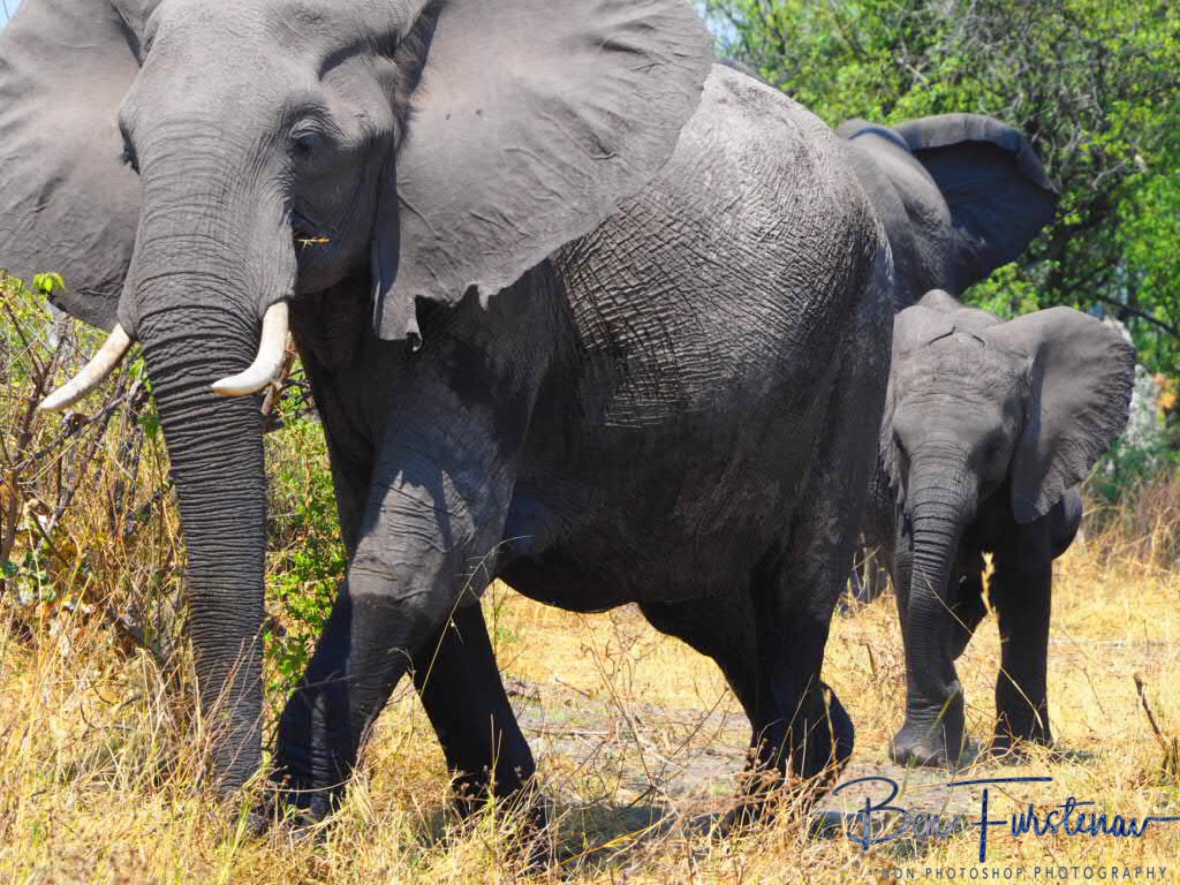 I came across a small herd of elephants on my way back to camp. 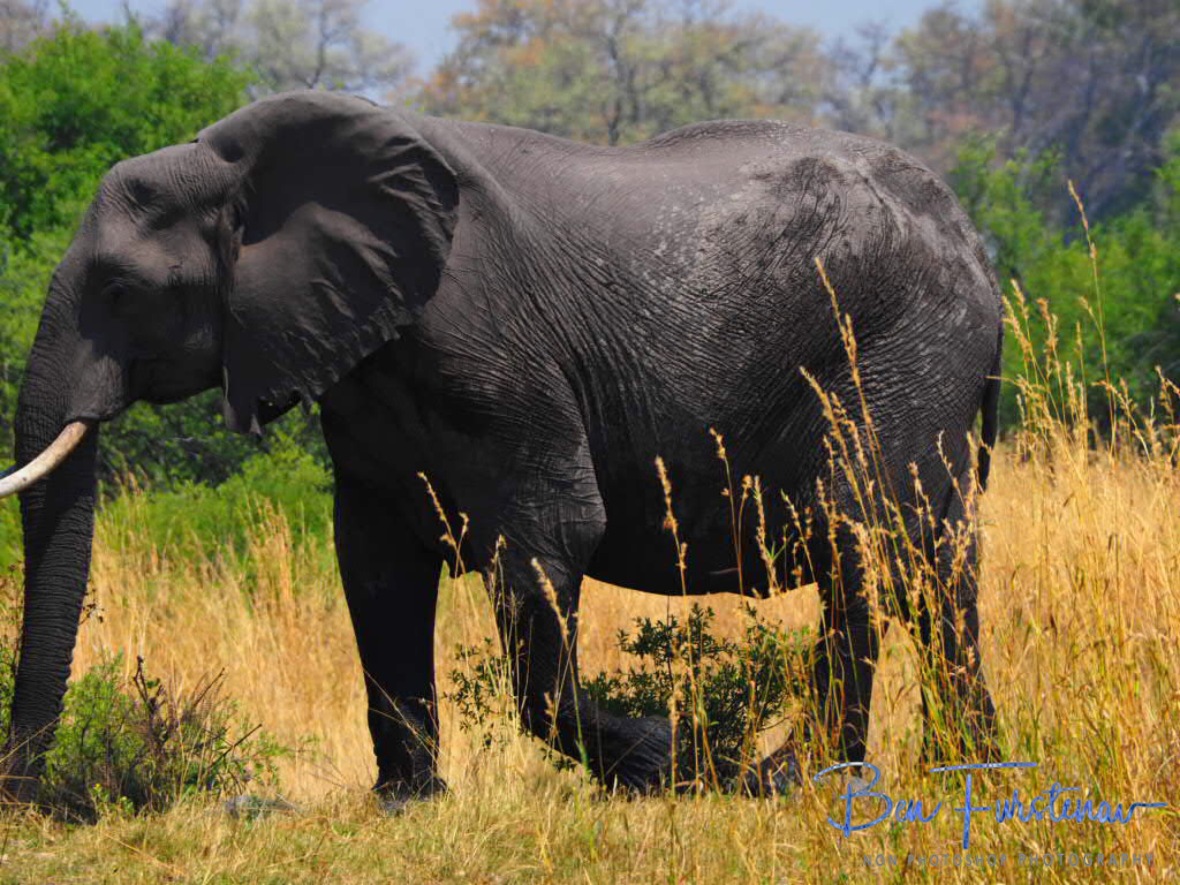 These disappeared rather quickly in thick bush. It was hot already when I got back to Camp before lunchtime. At least I could sit under a shady tree by a very quiet river. 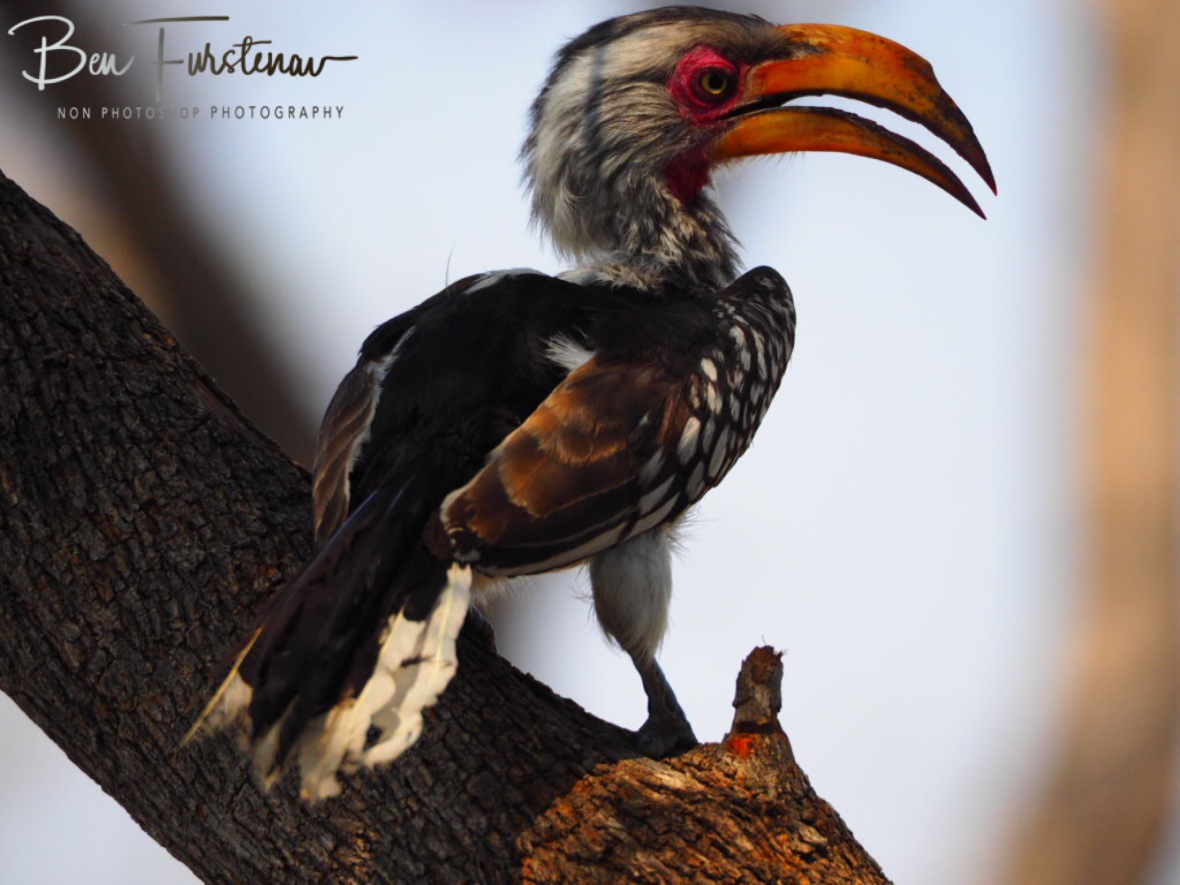 A pair off Southern Yellow Hornbills joined me on my relaxed afternoon. 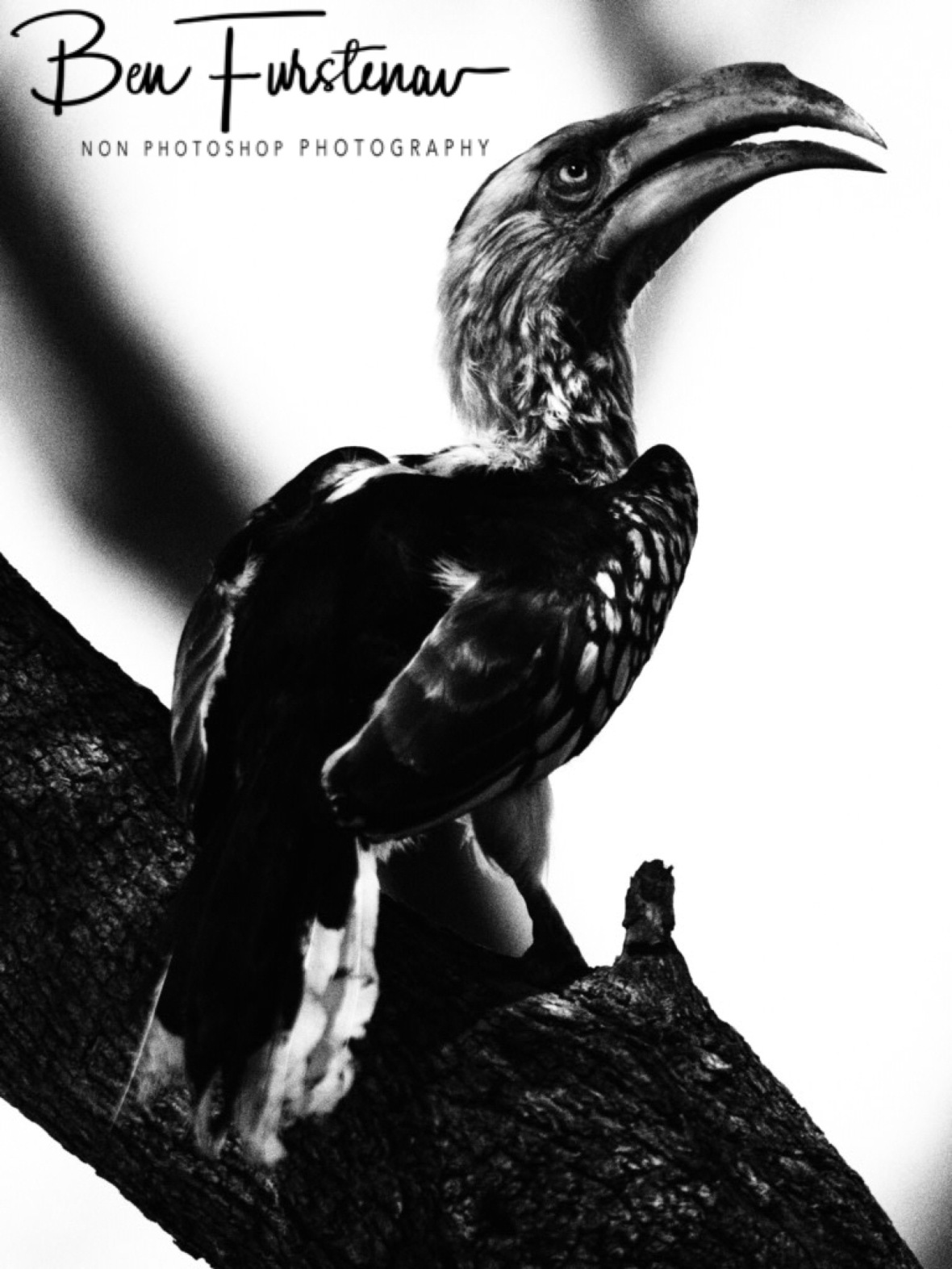 They sat in a nearby tree and had a good look around. 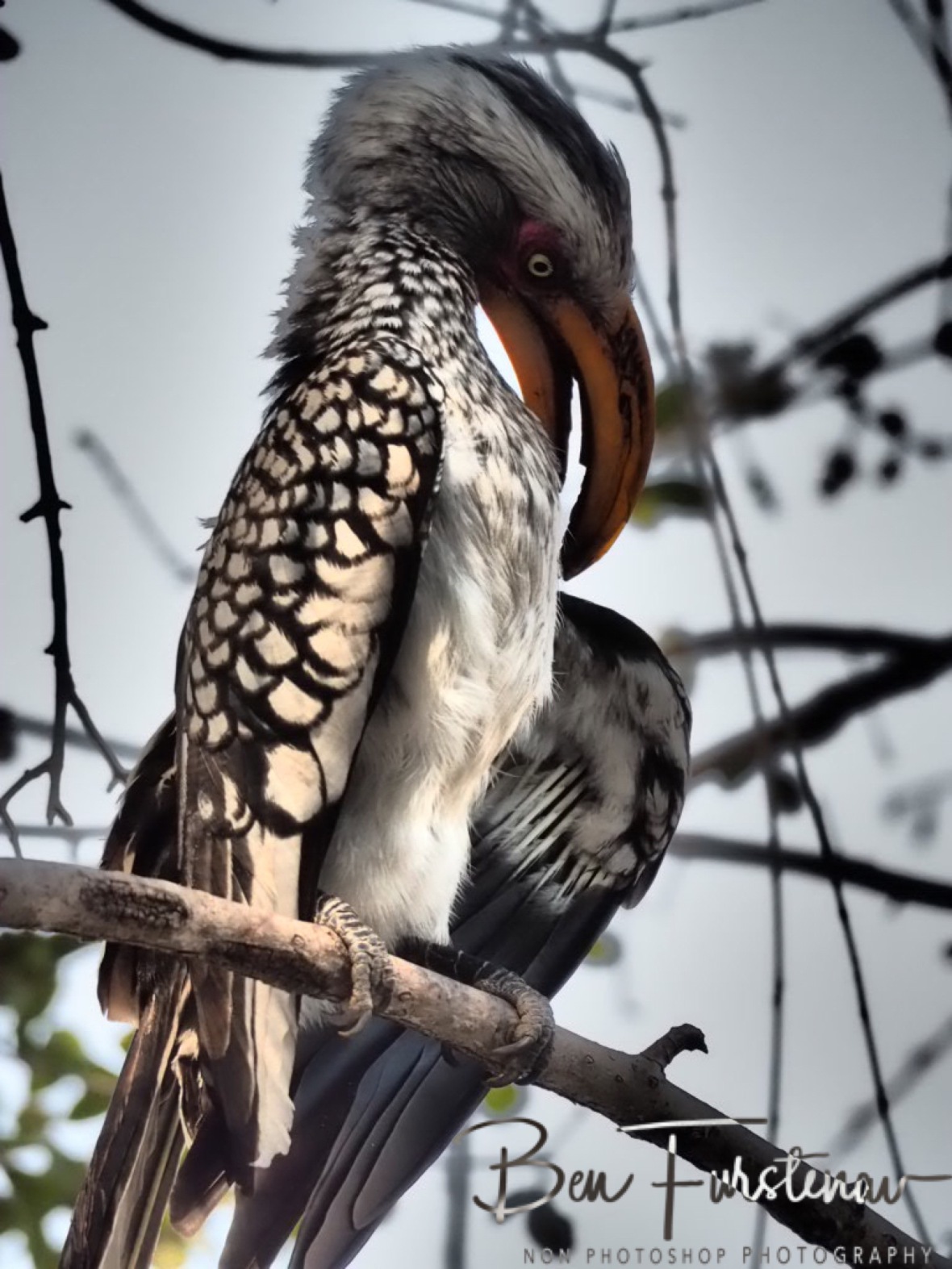 As no danger was to be seen, 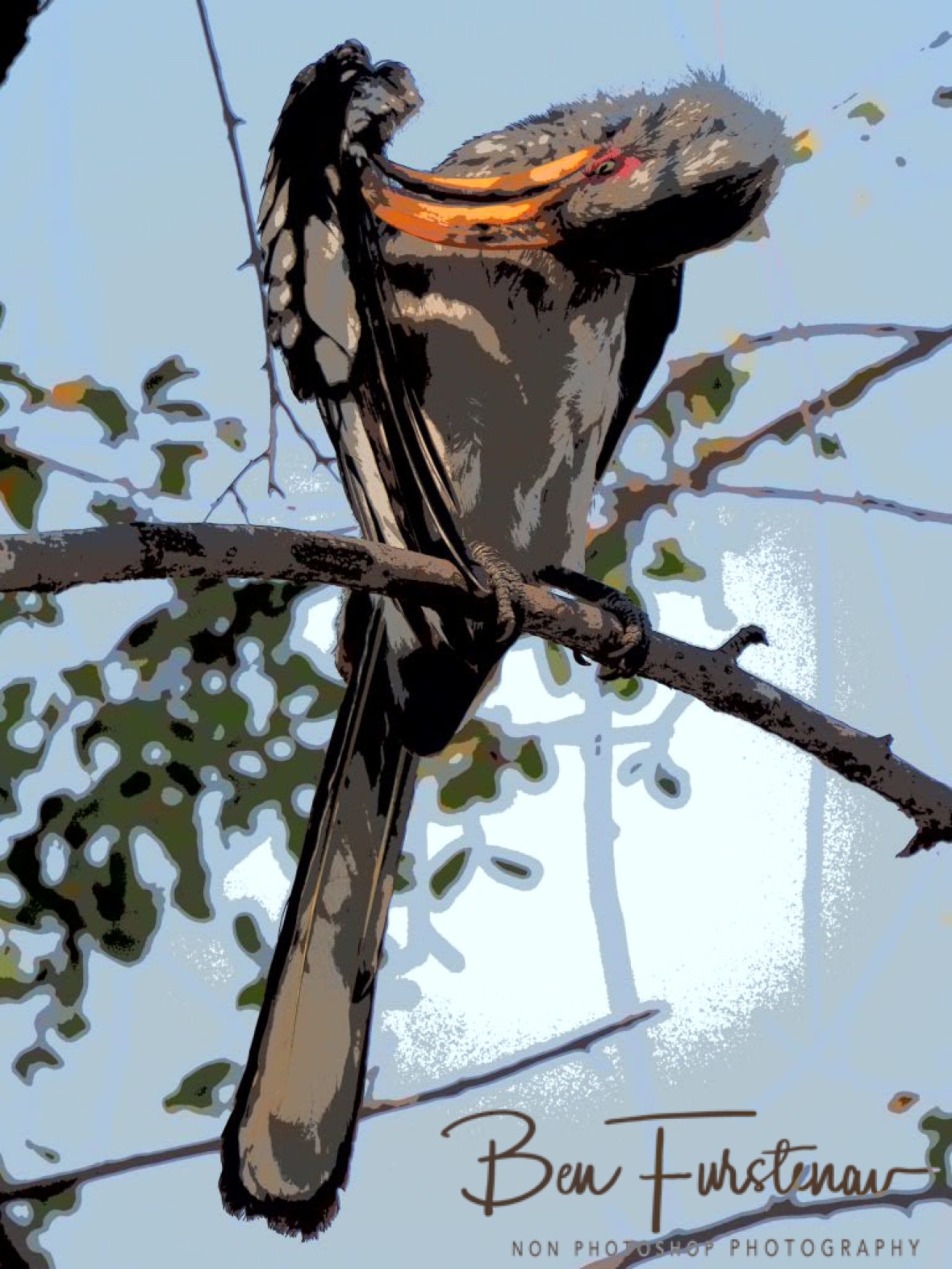 The left side too, Nkasa National Park, Namibia

cleaning their feathers is part of any birds routine. 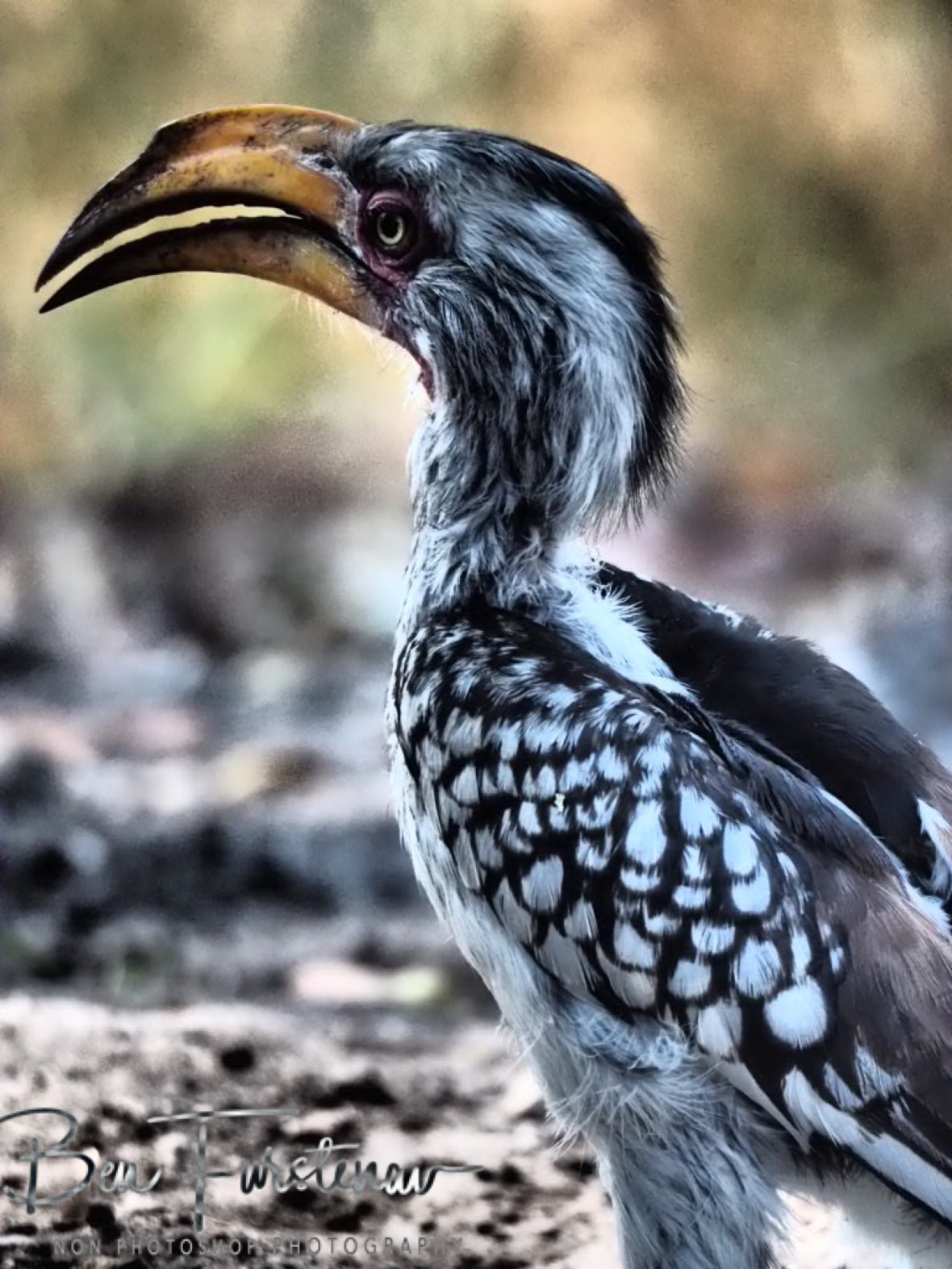 Some food on the ground?, Nkasa National Park, Namibia

Maybe some food may be lying on the ground? 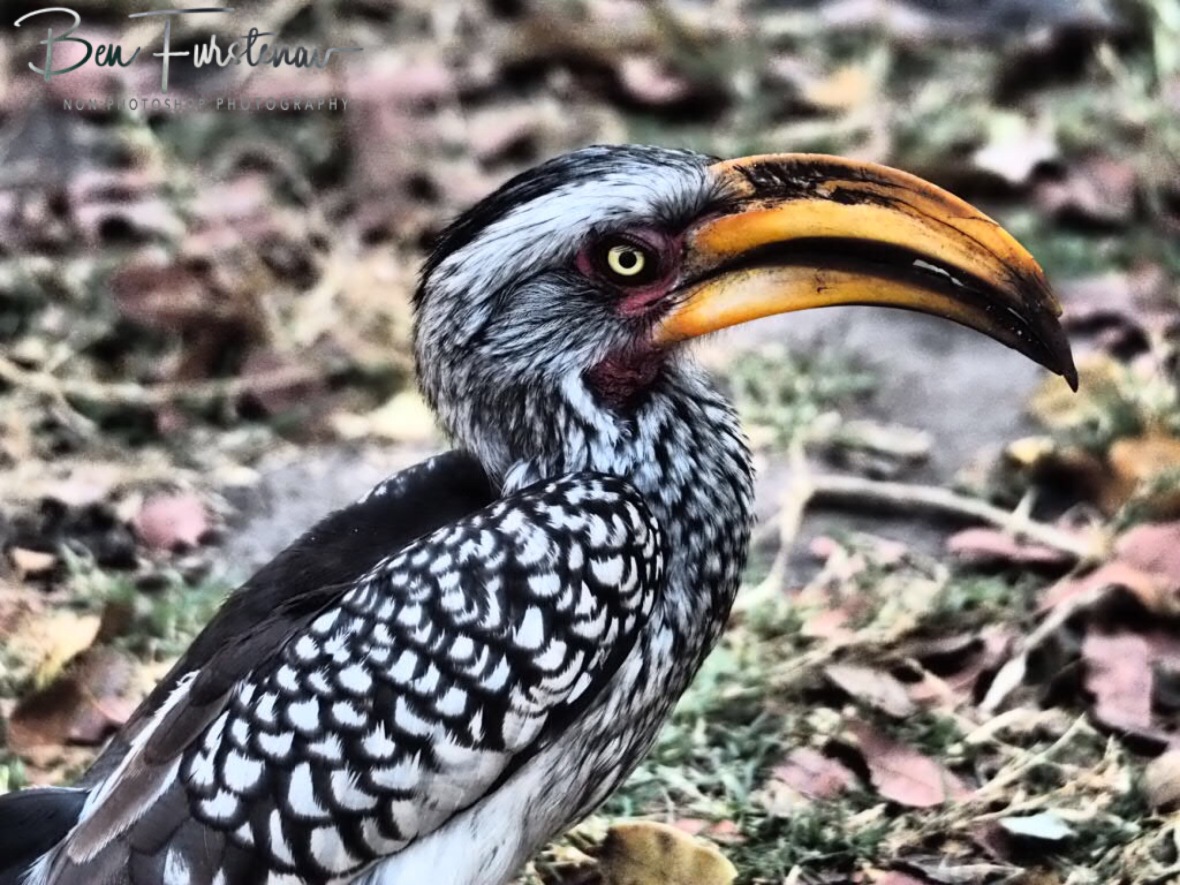 They are quite entertaining to watch. They do hop, but can also run along. 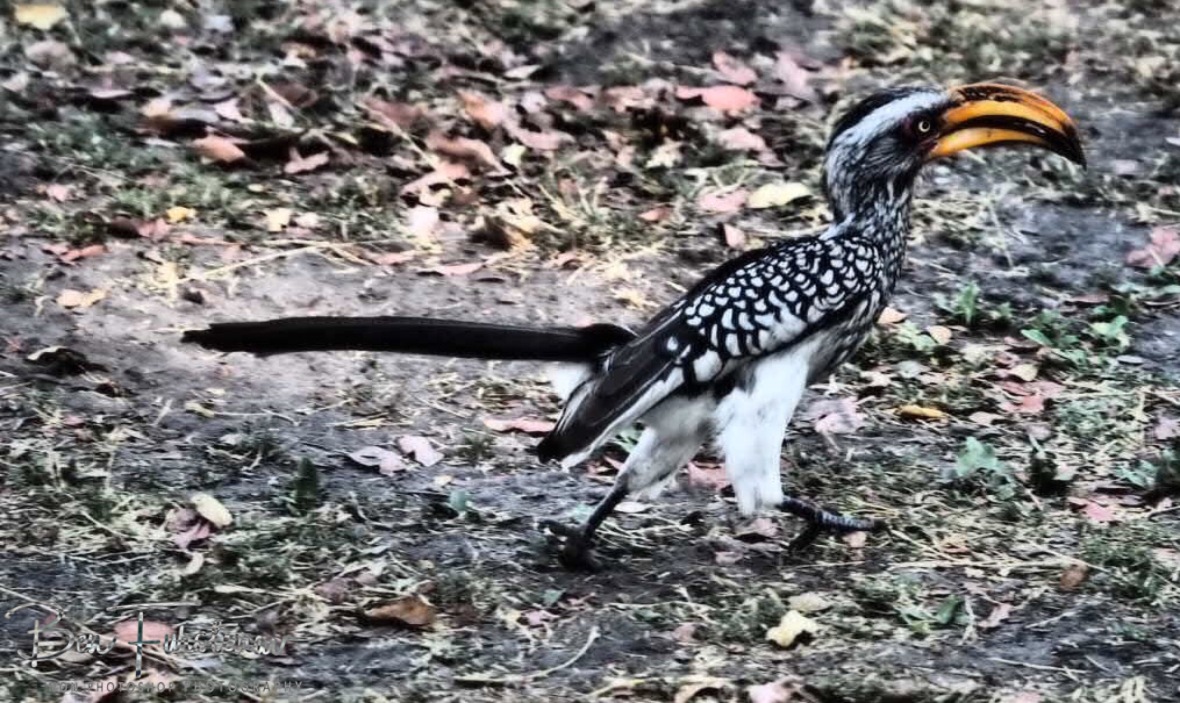 There wasn’t much else Wildlife to spot. A tranquil night by the fire was interrupted by a young gang of 6 Germans. Mistaking they were in a pub, screaming and shouting along. They got the message after I paid a visit. It’s time to move on again for many reasons. 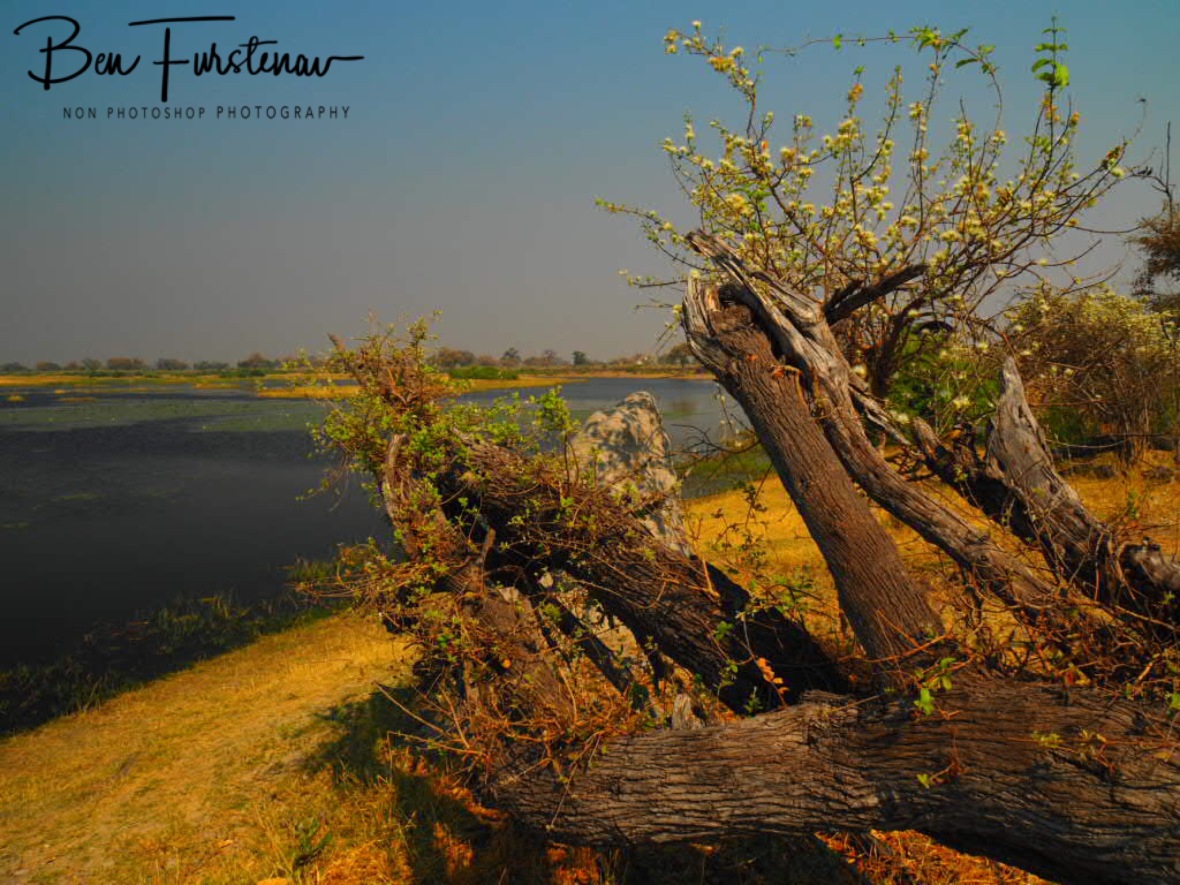 I had a cruisy day in mind. I stopped at ‘Mudumbu National Park’ early morning which looked promising on the map. Right along at the Okavango River, surely there would be some wildlife to be seen. 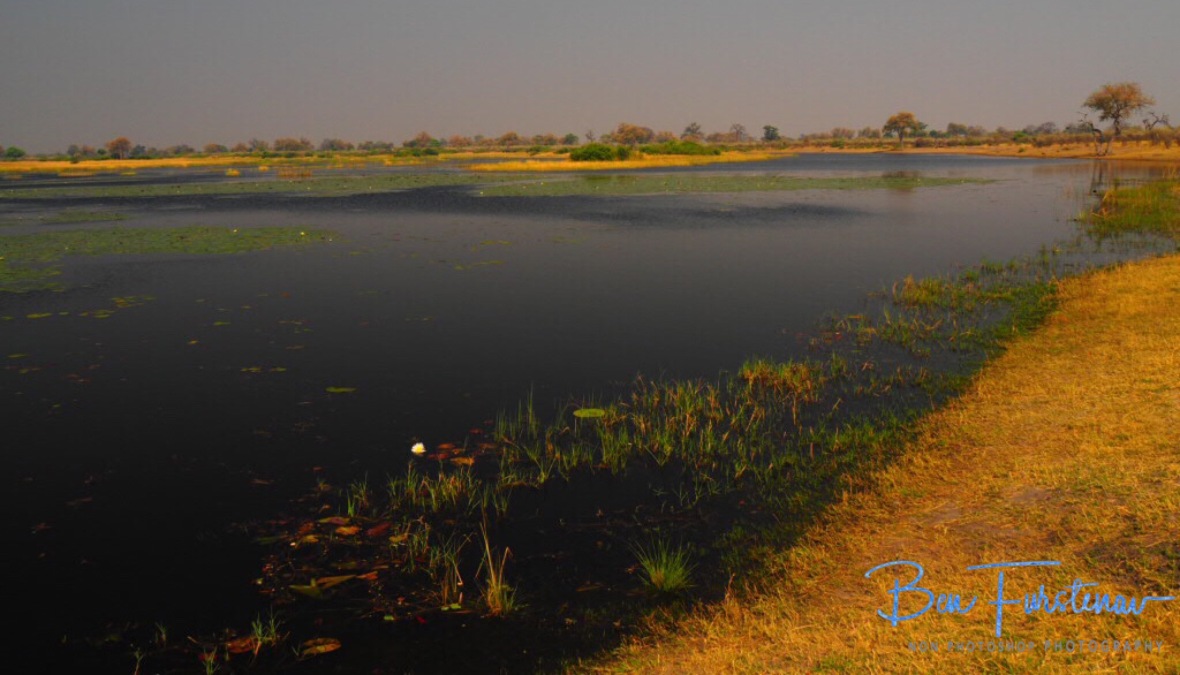 I came to a lookout Hyde along the river, which boosted absolutely no wildlife. Not even hippos were seen or heard. This is rather disappointing. 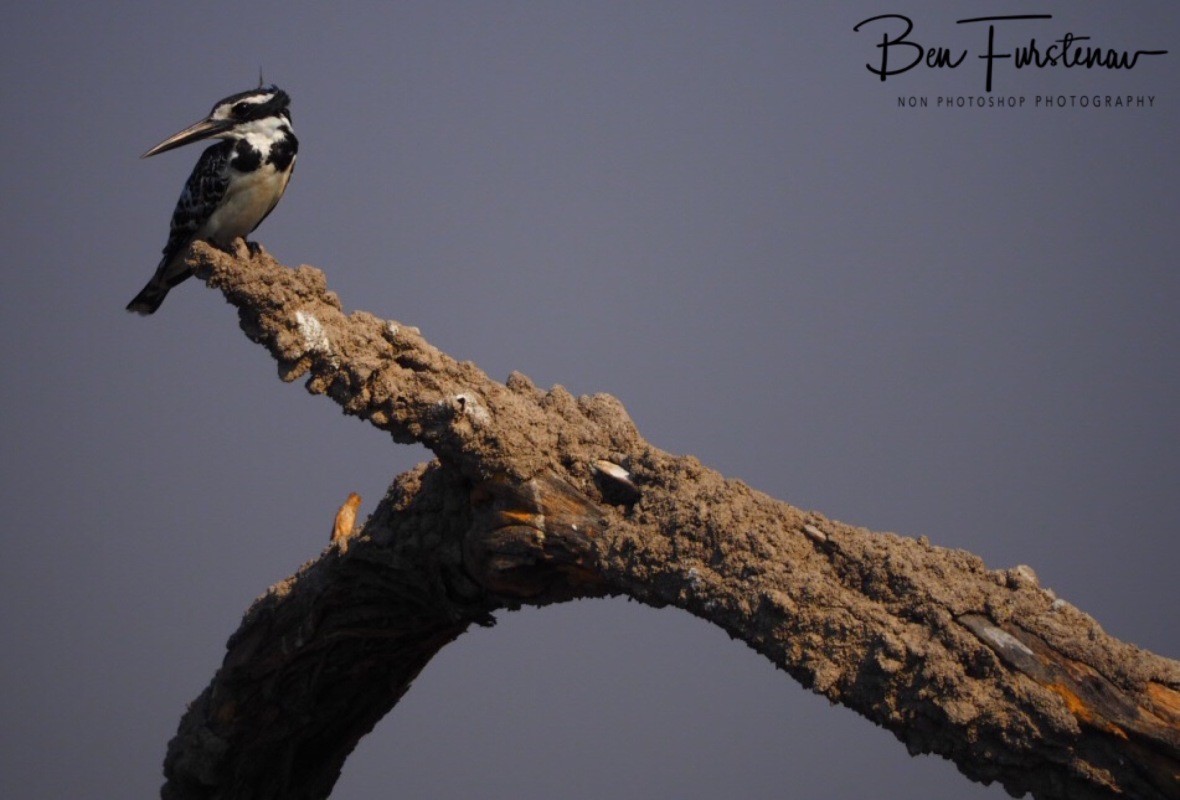 Was there a splash? Kingfisher at Mudumu National Park, Namibia

A lone kingfisher sat up high in the tree on the lookout for some fish. 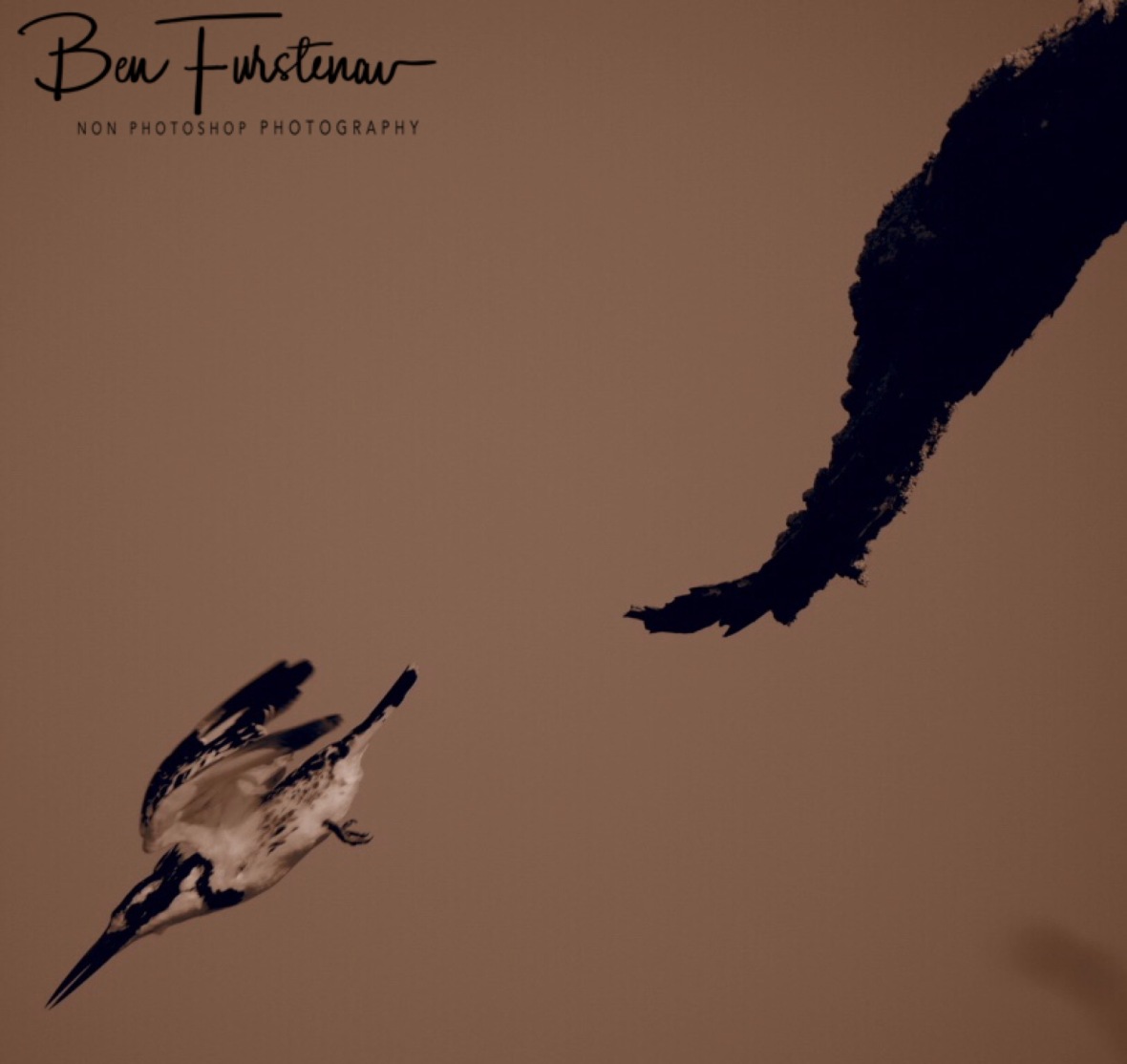 And he was off. 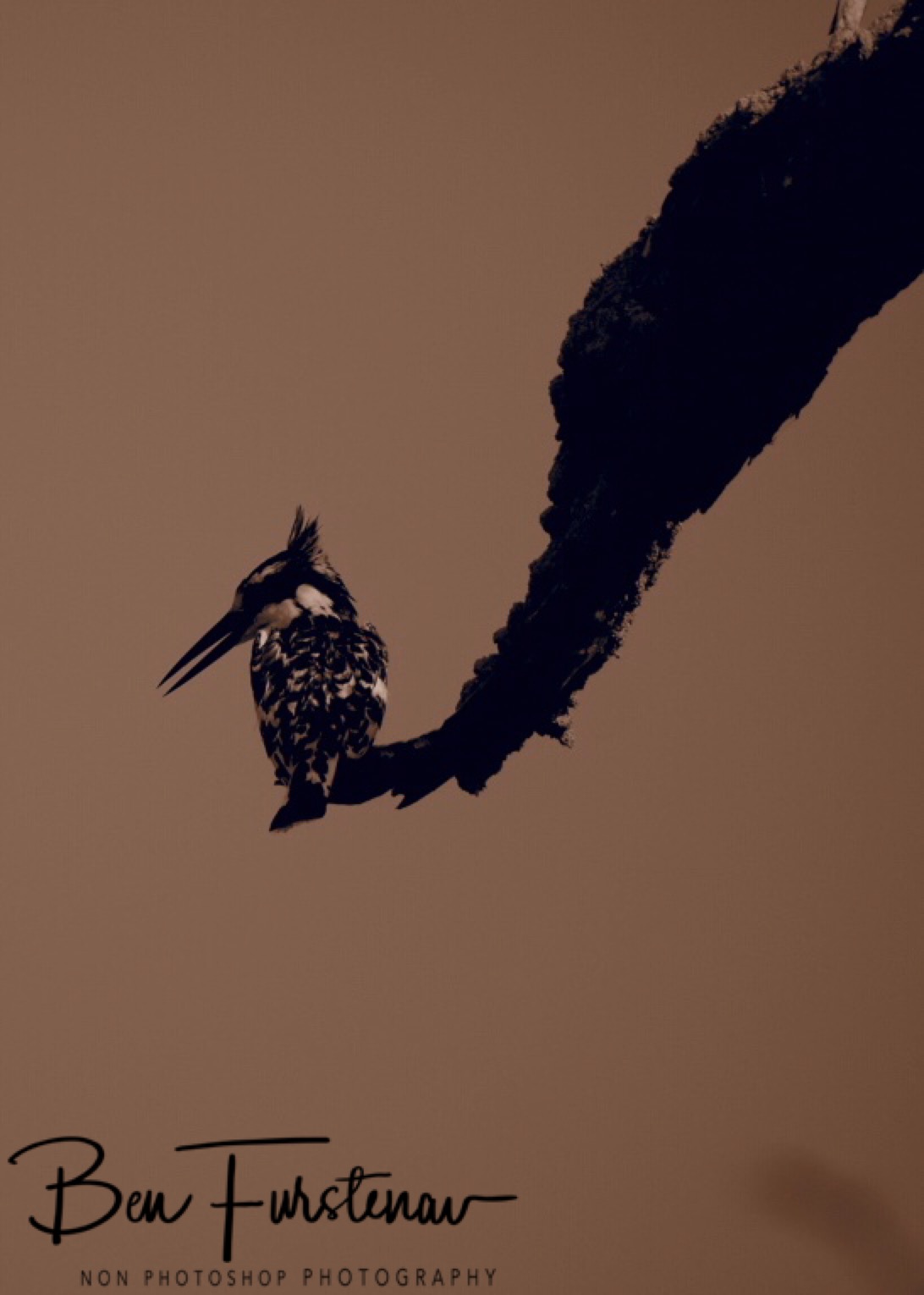 He did return empty handed a few times. 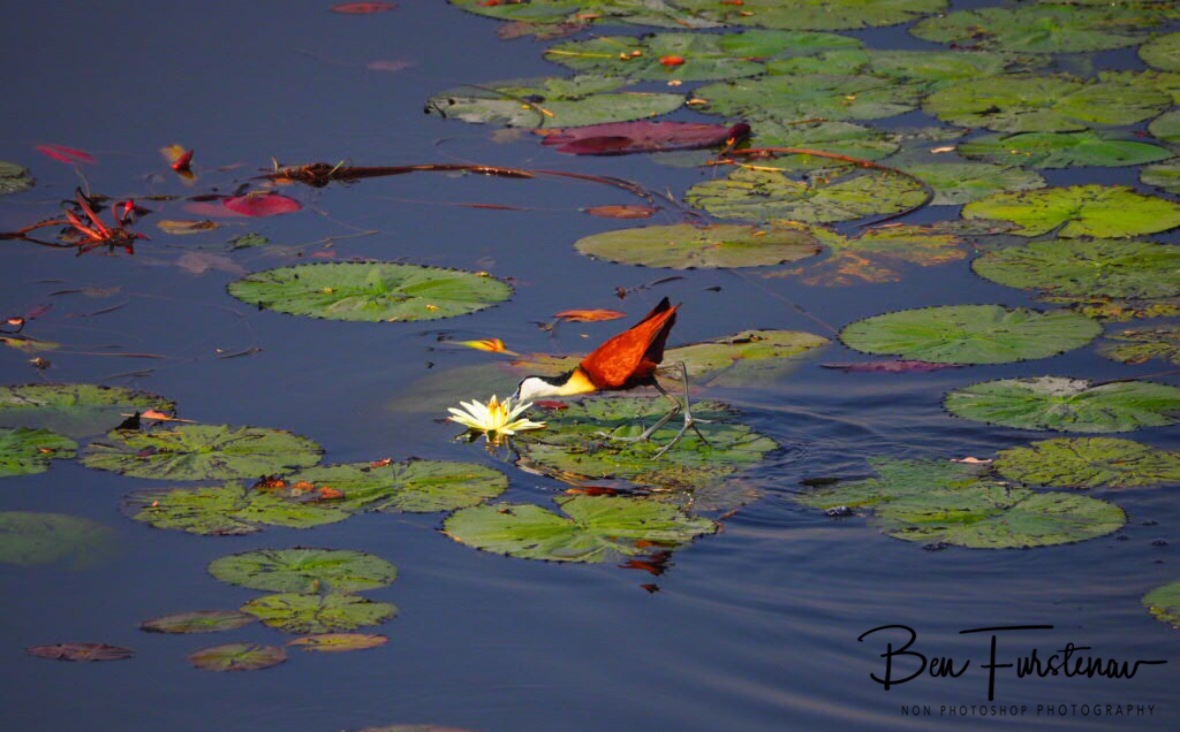 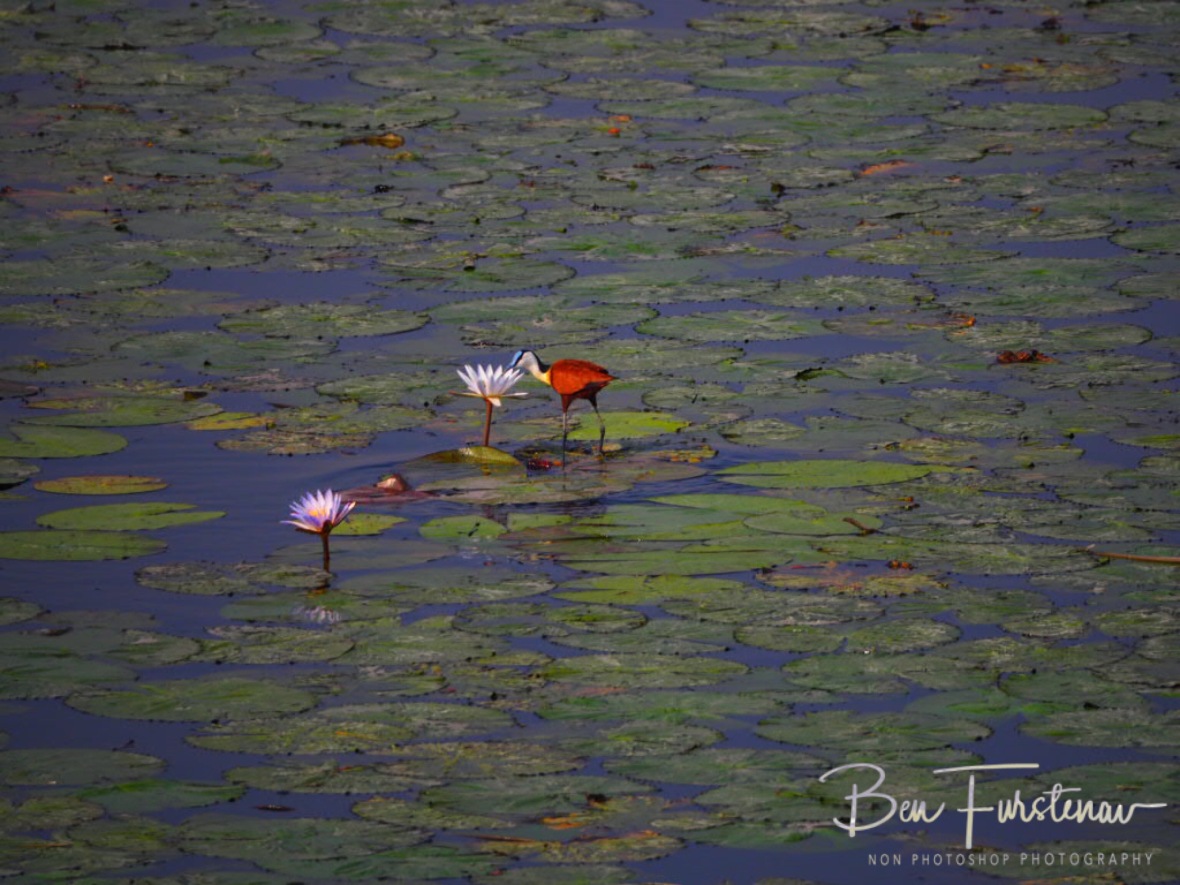 A colourful display. But all in all, it was time to leave the Caprivi Strip with its lifeless waterways and head for the Kalahari Desert. My hopes are not high for a Wildlife bonanza. Let’s see what happens.