Khaudum National Park is situated in the northeastern corner off Namibia, just south of the Caprivi Strip and borders Botswana’s western fringe. Known as ‘Bushmenland’, it is part of the greater Kalahari Desert. The Khaudum River has played a major role in wildlife migration from the eastern side of the Namib Desert, Etosha Pan into the Okavango Delta. 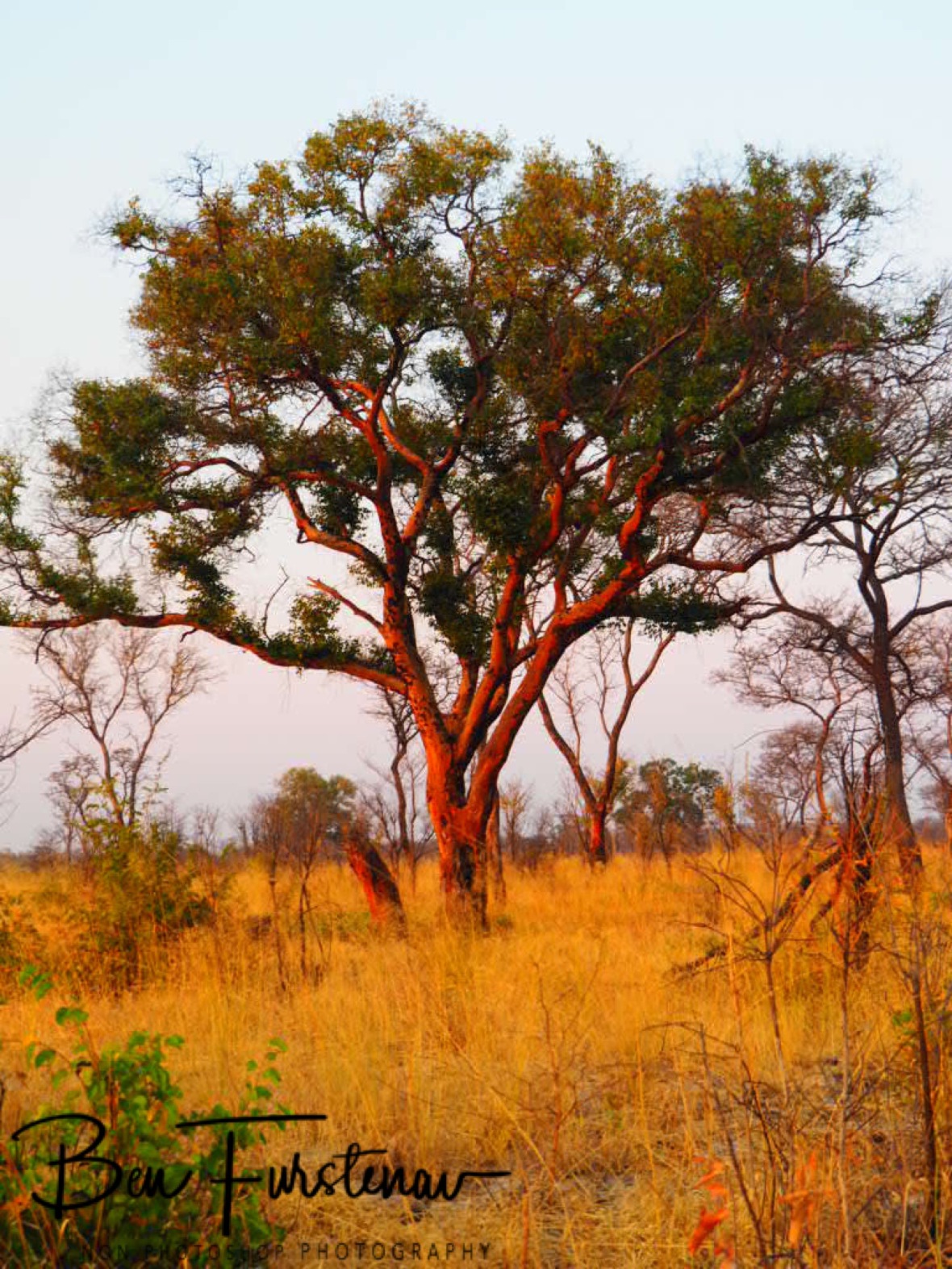 The flora doesn’t change much around Khaudum National Park, Namibia

Seemingly dry riverbeds still hold various waterholes, which eventually turn in to mud holes, before drying out completely. Depending on how severe the drought turns out annually, some waterholes may survive a dry season, before the rains return, keeping humans and wildlife alive. With increasing human development and interactions within the last century, native tribes and wildlife were either scared of or hunted. Being this unforgiving land, no Europeans settled. Immense buffalo herds called Khaudum their home, not a single one is found here anymore. In native ‘Omuramba’ language, Khaudum means buffalo. 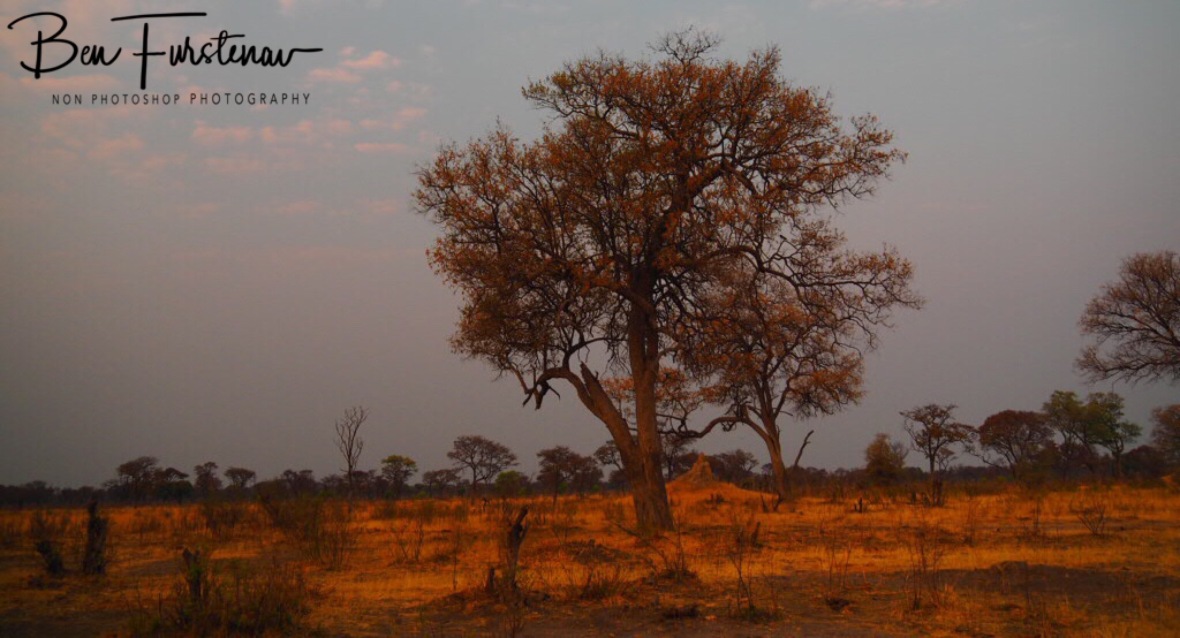 The Khaudum area was identified as a conservation priority by the Gciriku Traditional Authority and proclaimed as a Game Reserve in the 1980’s. National Park development began shortly after Namibian Independence. Fenceless to the north and to the south gives migrating herds the freedom to do so.

Wildlife movement is monitored traditionally and fire management controls are in place to prevent large-scale damage in the fire season. Permanent waterholes have been created and grazing Antilope restocked, to limit confrontations with farming neighbours.

The location of this desert jewel is both; an attraction as well as a distraction. There is no easy way to get here, no easy way to move around. A sturdy, reliable high clearance 4×4 is a must, soft sand driving skills and common sense essential. This keeps most travelers away. A bonus for flora and fauna, a minus on infrastructure and funds. 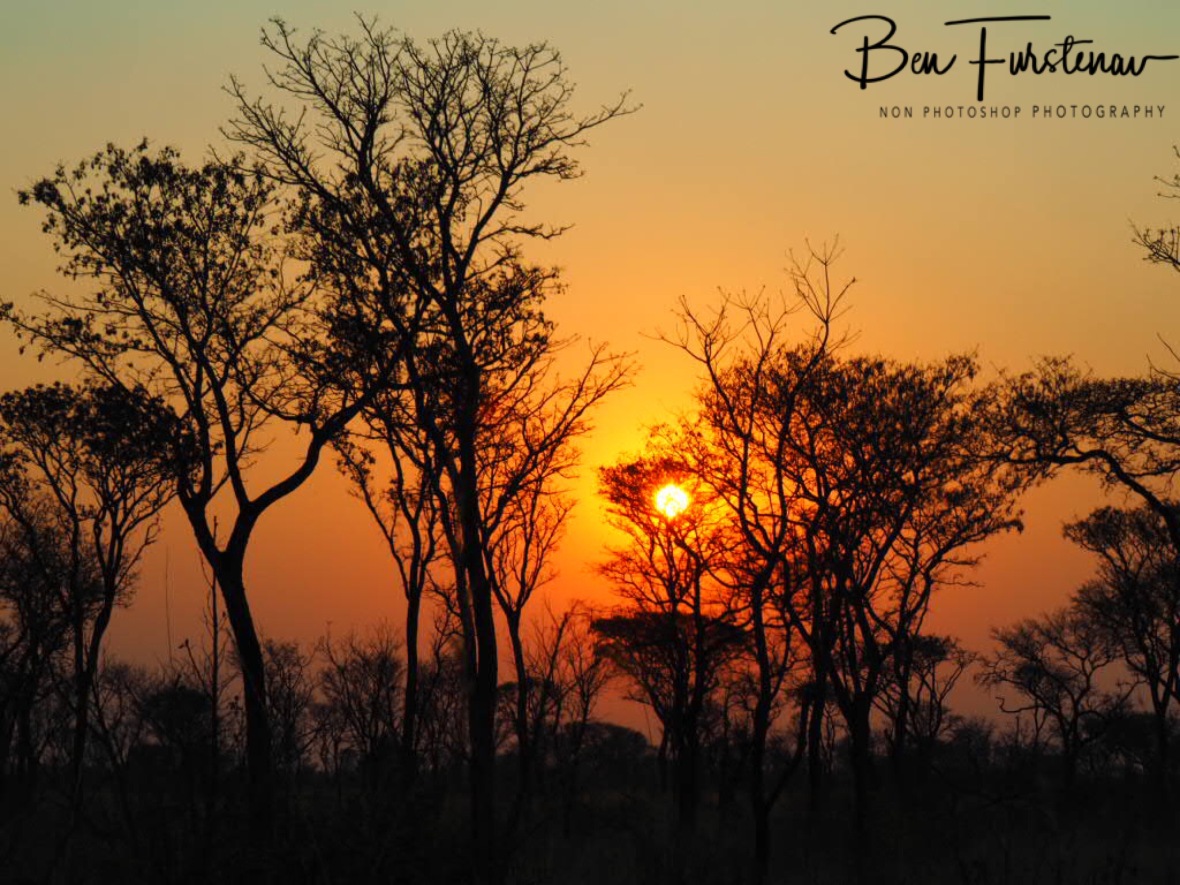 Spectacular sunsets over the Kalahari gives you a real sense off tranquility. 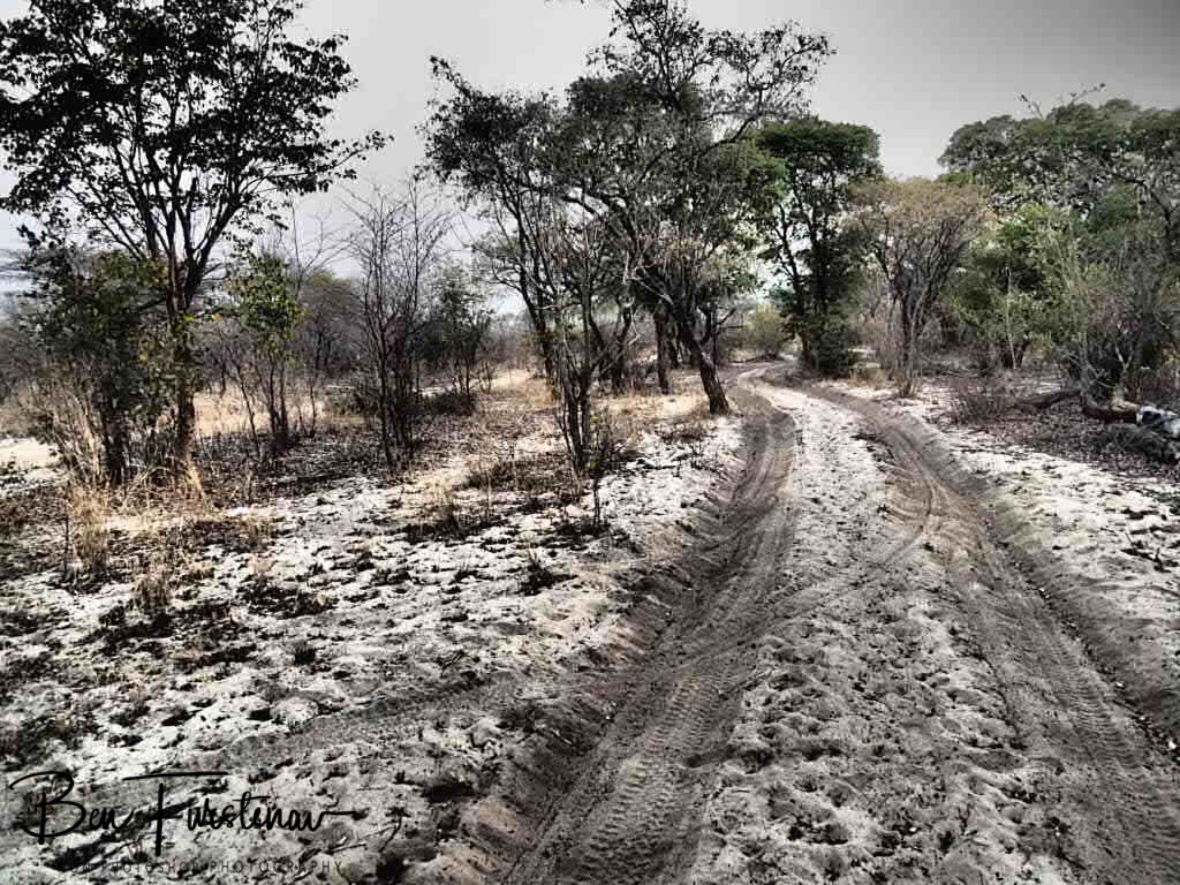 Admittedly, I wouldn’t have dared our way into the Kalahari at the beginning of my journey for these reasons. Within the last few months on adventures in remote locations, I realised Zimba’s abilities and mobility and increased my driving skills. Another challenge for us both, another, hopefully, tranquil adventure. That is exactly what Khaudum National Park is all about. An oasis for the abundance of wildlife, that astounded even myself. After my dismal wildlife watching experience along Namibia’s Okavango River, I had little or any wildlife expectations in this arid landscape. 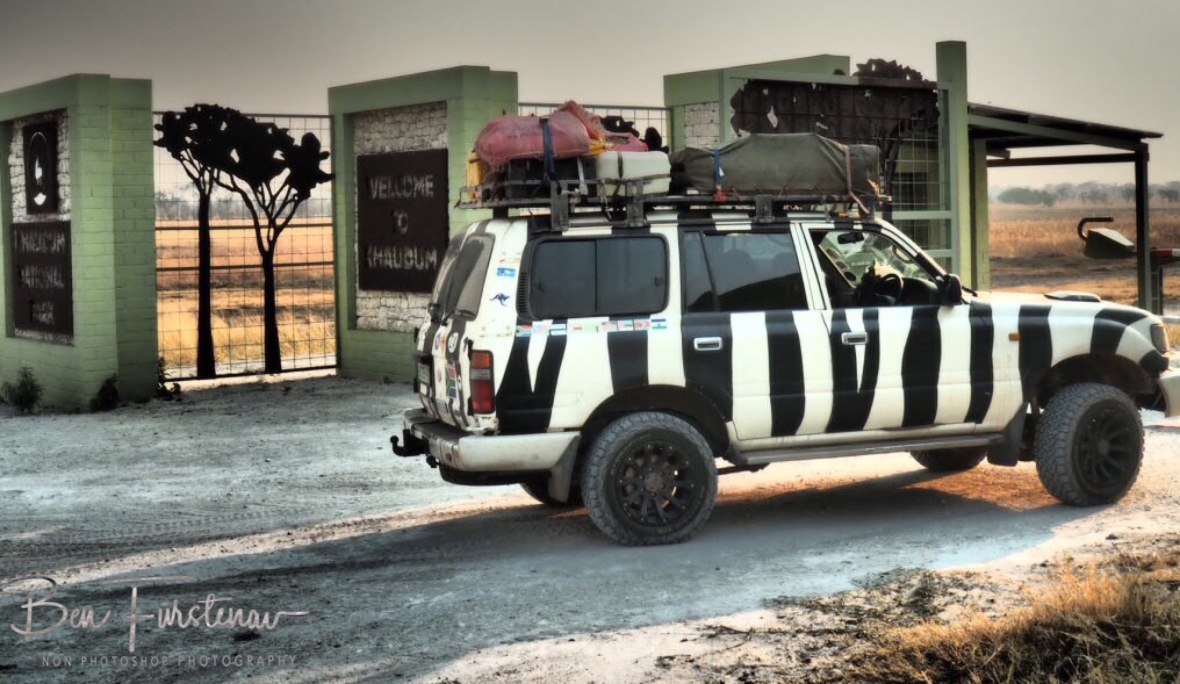 My opinion changed quickly by arriving at the northern entrance gate. 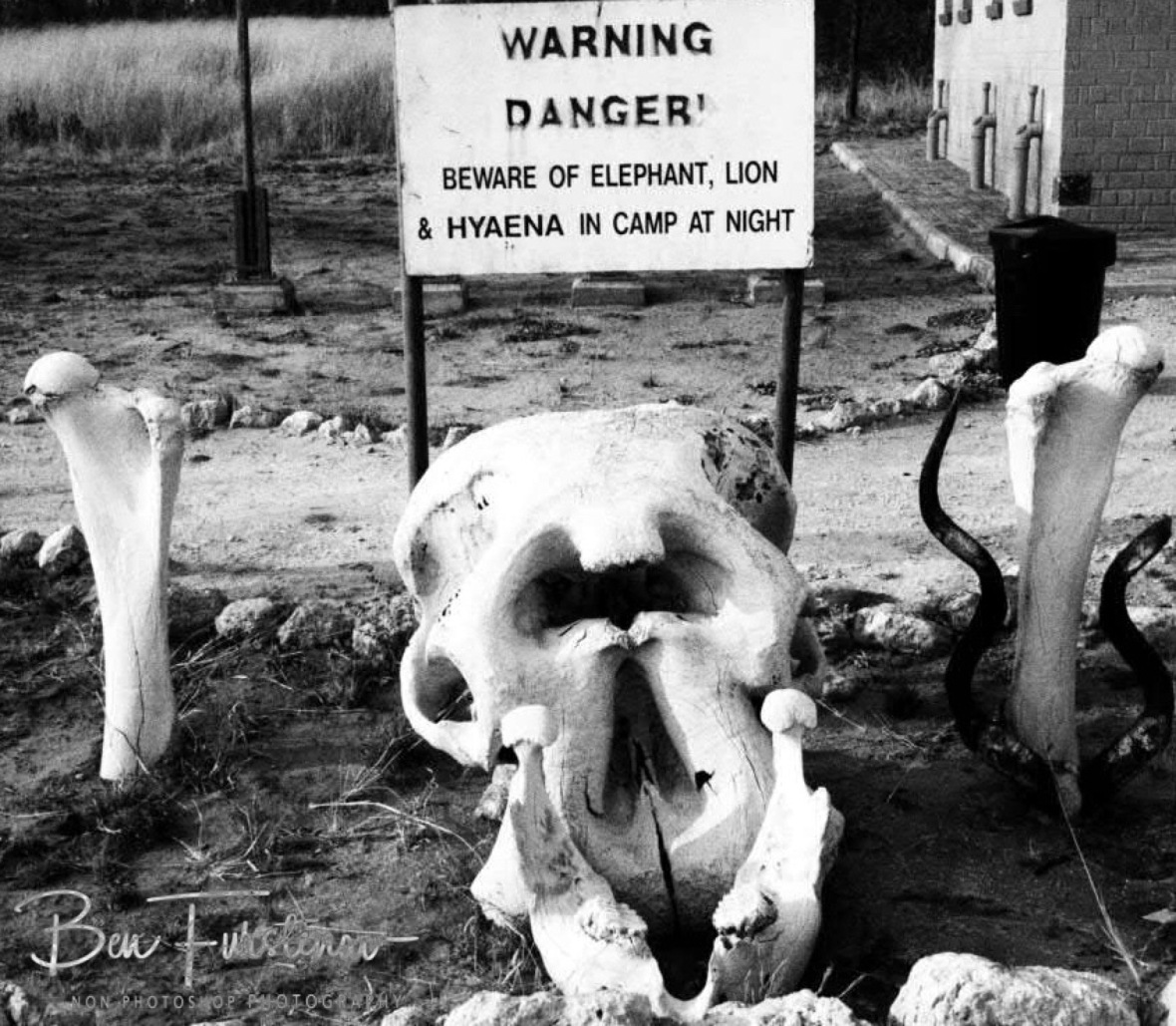 The warning signs were clear, this is no walk in the park. 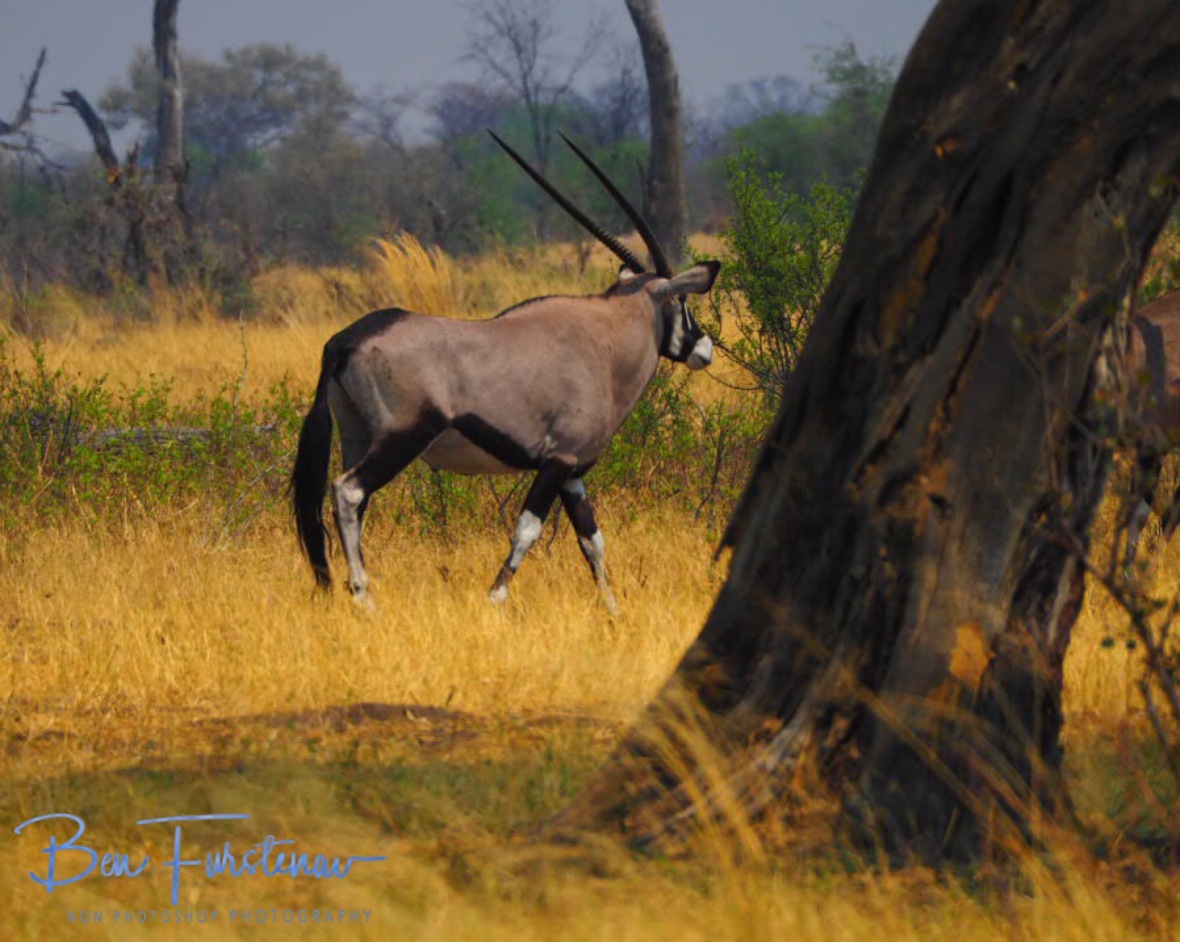 Seeing a Gemsbok means only one thing. This is the Kalahari Desert.

Kudus inhabit this dessert as well. Fair sized groups off females grazed rather casually, with their usual curious facial expressions. 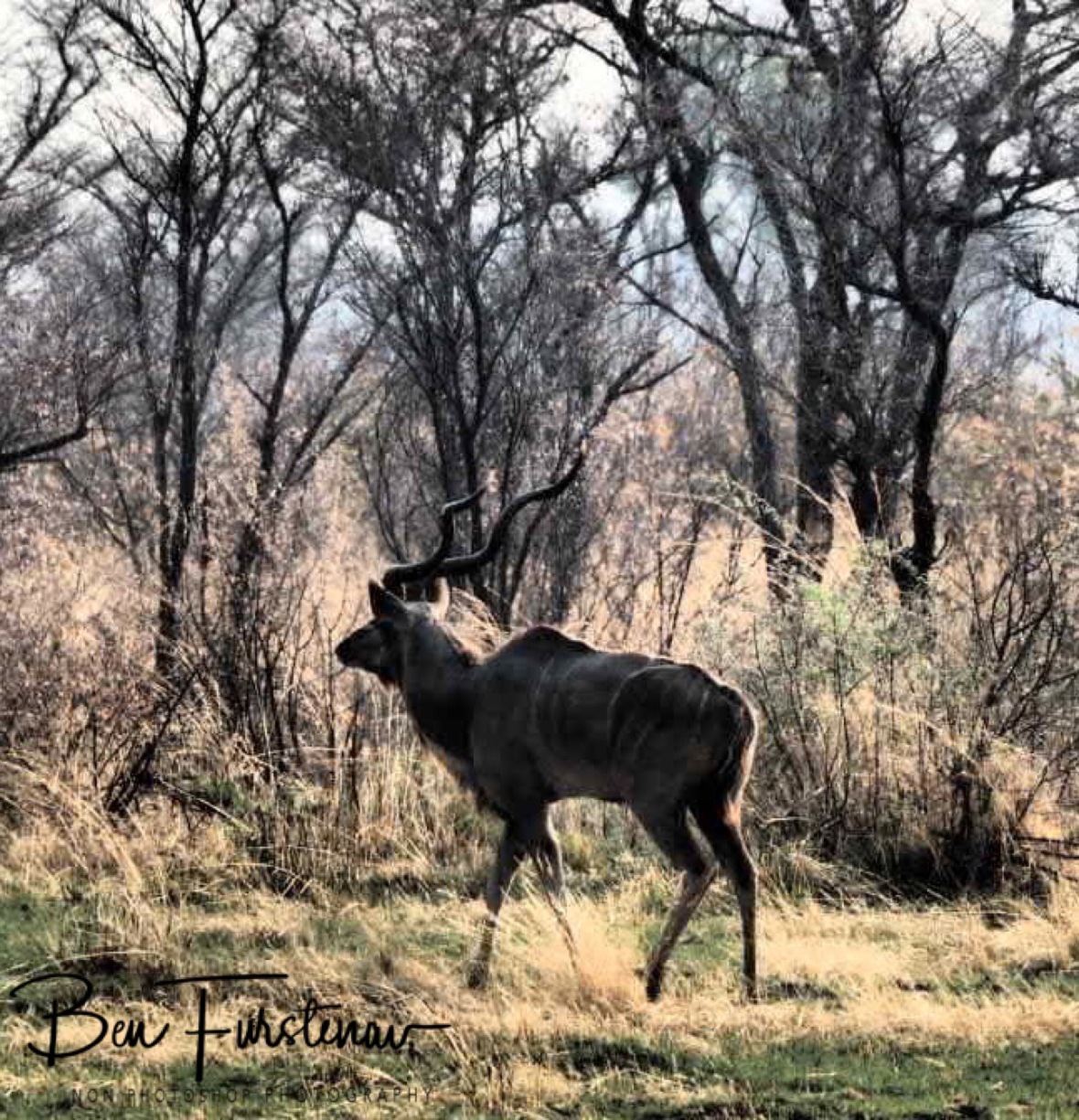 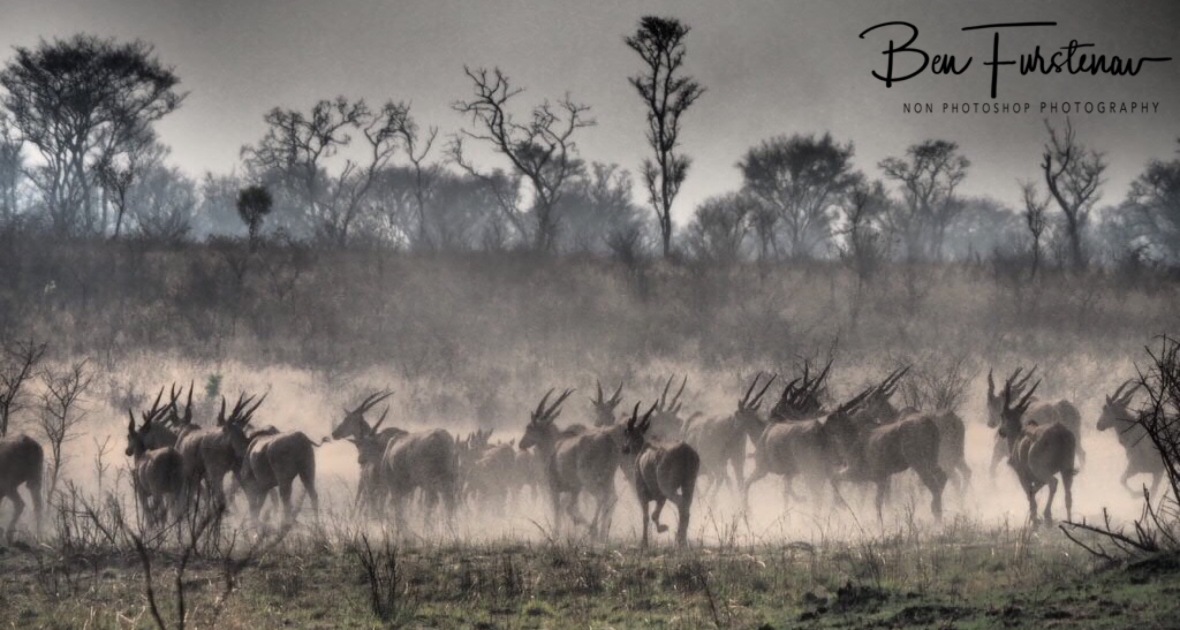 A large herd of Eland, the largest of Africa’s Antelope, ran off on my arrival. They crossed the path towards the dry Khaudum River and appeared disoriented.

Like soldiers, they marched off across the path again, leaving only dust behind. 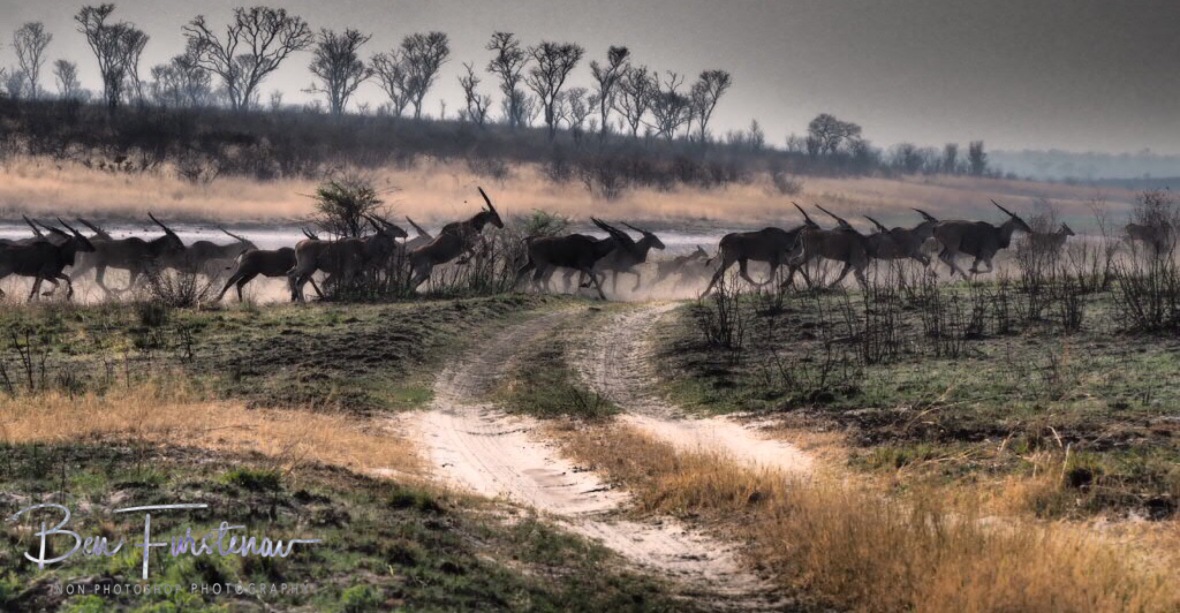 And off they go again, Khaudum National Park, Namibia

I haven’t seen any Eland since the Nykia Plateau in Malawi, which had a different natural structure.

The same goes for the Roan or Horseantilope.

Khaudum National Park boasts an abundance of smaller herds. Often seen in the dry Khaudum Riverbed or at other waterholes.

Their approach to waterholes is extremely cautious and are just as easily scared off. 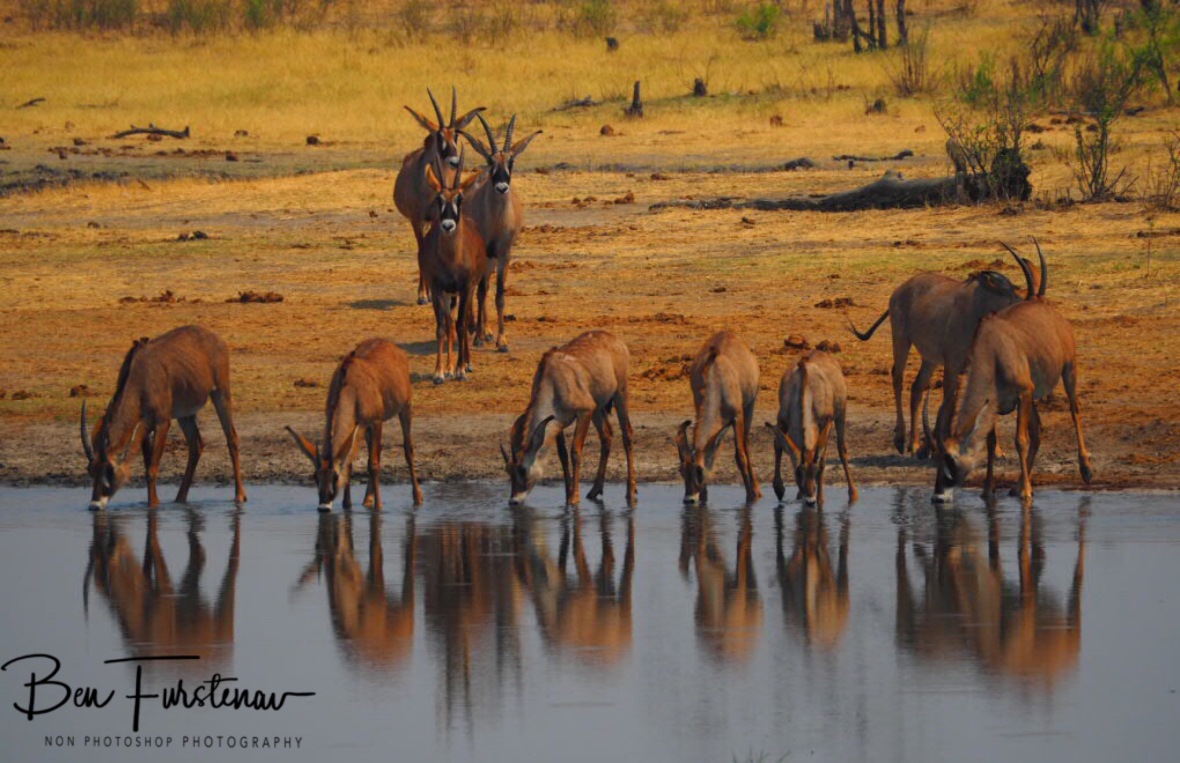 A flock off Weber Birds got this fair seized herd in motion. 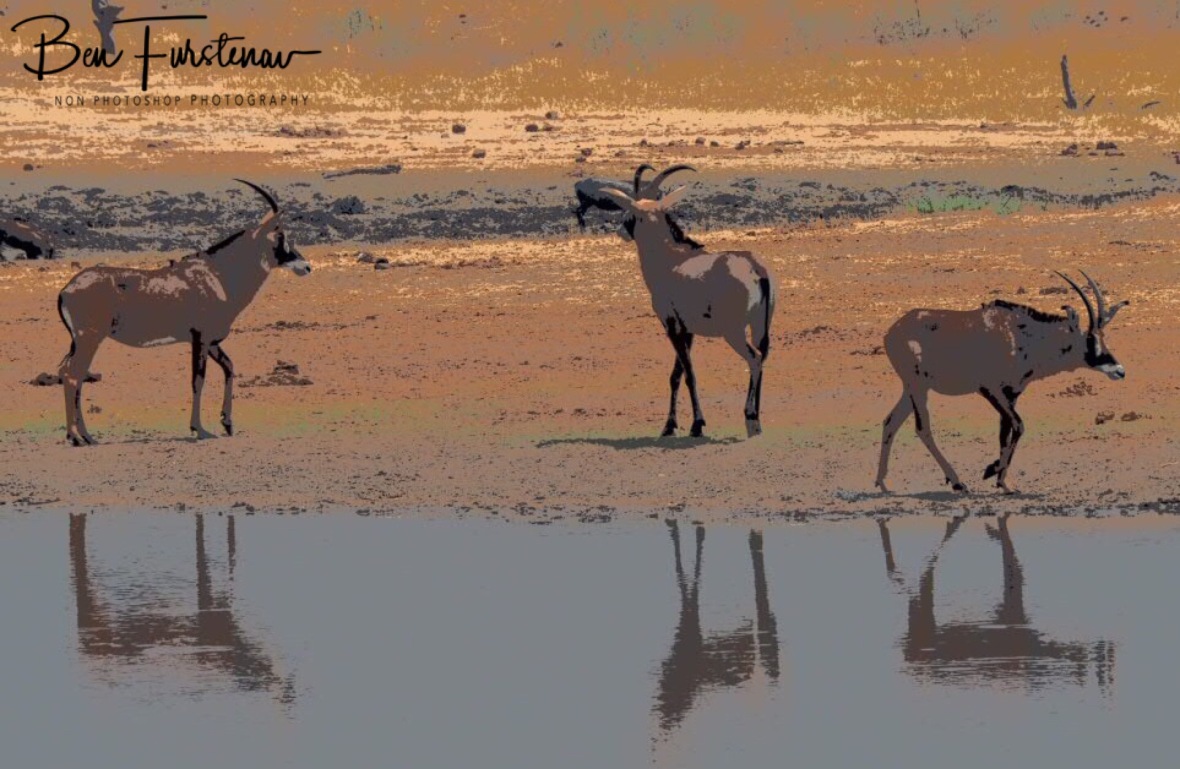 These returned after a thirsty herd off elephants took over reigns at ‘Tsau Waterhole’. 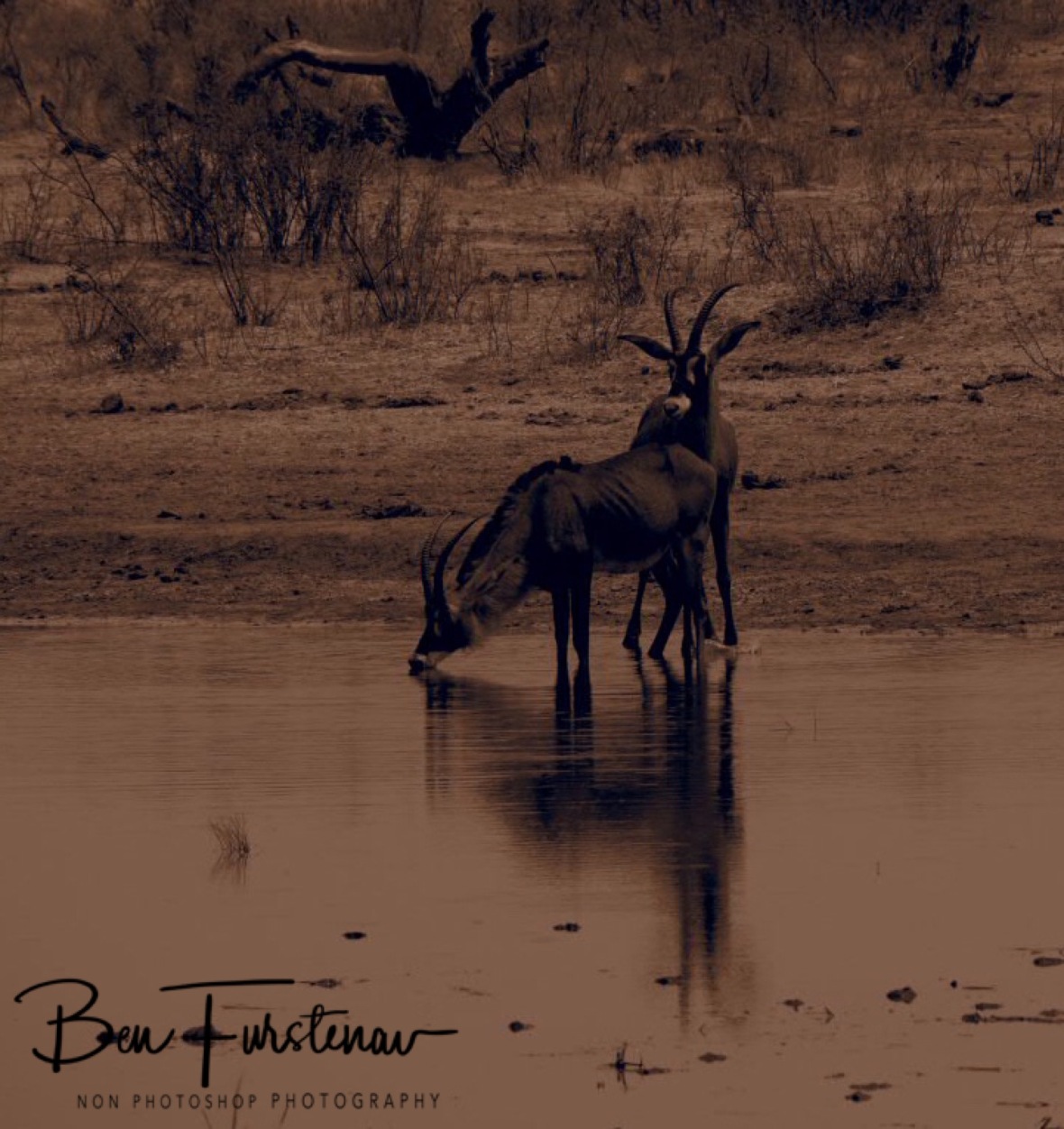 On a different occasion, one was looking out for approaching danger, whilst the other stilled its thirst.

Warthogs had a similar technique. One just can’t be too careful. 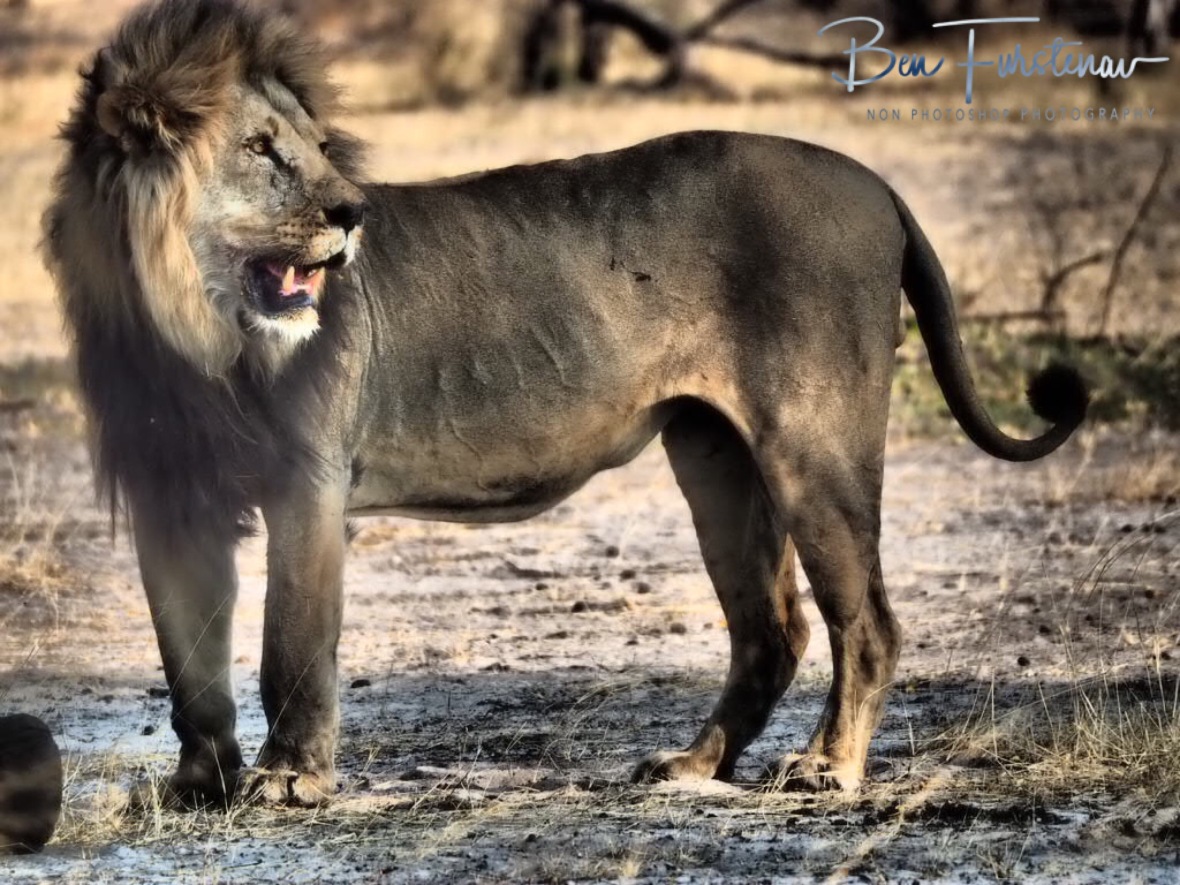 Khaudum National Park is Home to all larger African predators. Lions are seen more frequent then Leopards, Cheetahs, and African Wild dogs. Add Hyenas, Servals, and Caracals to this landscape, any mistake could be fatal.

Most surprising for me was the immense elephant population. Unofficial numbers are around 5000 elephants with numbers growing.

Squeezing for shade whilst queuing up, Khaudum National Park, Namibia

Wandering routes had been cut off by human interactions and the knowledge of man-made permanent waterholes draws more and more elephants into ‘Khaudum National Park’.  Some waterholes were occupied by hundreds of elephants in the afternoons.

Too much fun for elephants and for me to watch, Khaudum National Park, Namibia

They enjoyed the muddy waters for a bath and mud shower but preferred the fresh water pumping wells to drink from. This resulted in queues, pushing and shoving in between the herds. 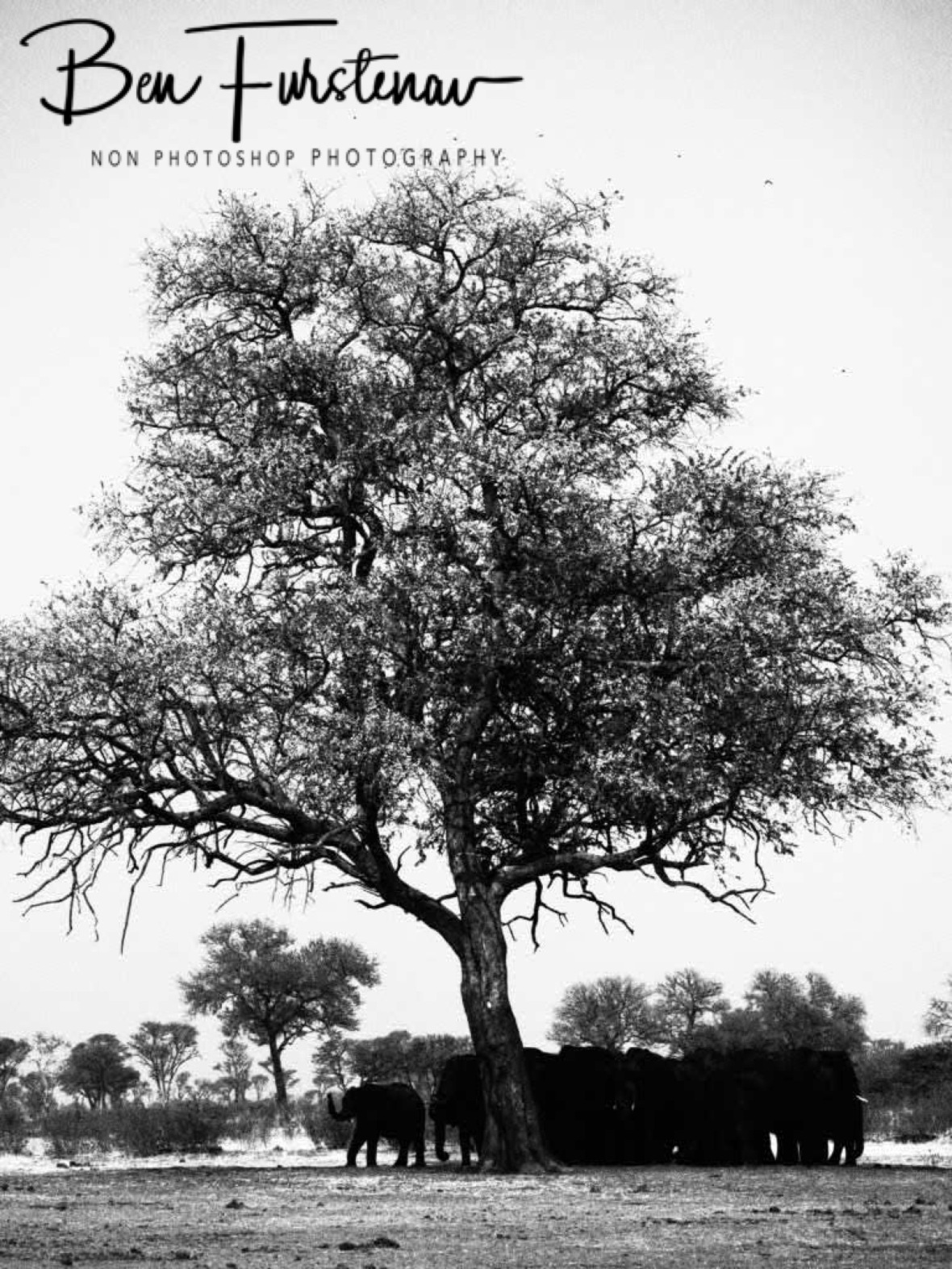 Keeping your cool was anyone’s, in particular, elephant’s priority. 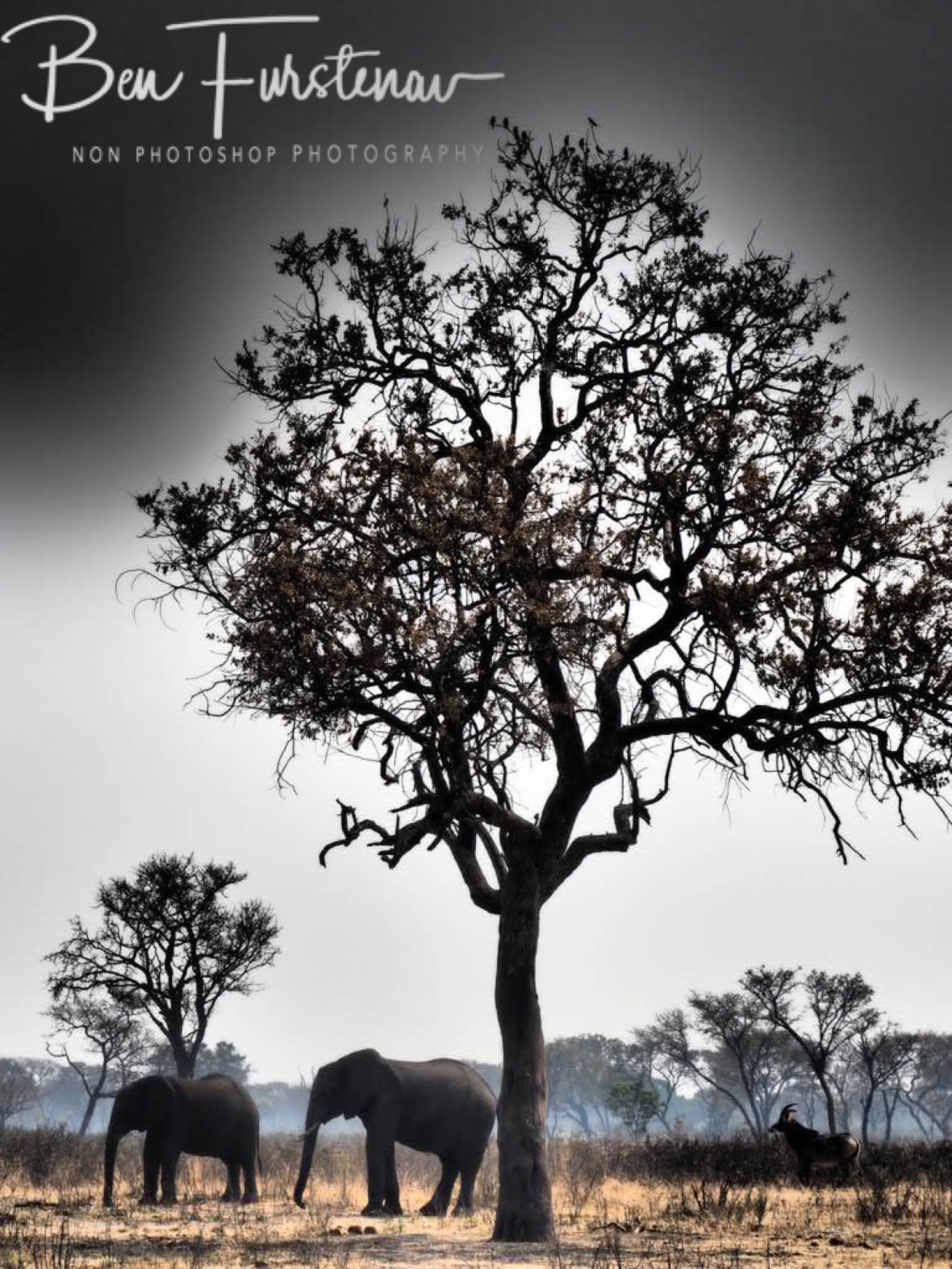 Any shade will do, Khaudum National Park, Namibia

Over and over, smaller groups were seen standing in the cooling shade of larger trees. Zimba’s inbuilt thermometer reached over 40 degrees Celsius by 9 am. It was my priority as well and I wanted to avoid driving through hot soft sand at all costs. The idea was to set up camp at ‘Khaudum lodge/Campground’ during the midday heat and use the cooler hours of the day for game driving. This idea didn’t work out and I can clearly blame elephants out off three reasons.

Reason one is elephant cuteness. Watching them cooling off and quenching their thirst is just a spectacle I can’t resist. To be able to witness and photograph this happy gathering is just marvelous.

The second reason is elephants recklessly blockade the sand tracks by breaking trees. They weren’t reckless, it just sounded dramatic. 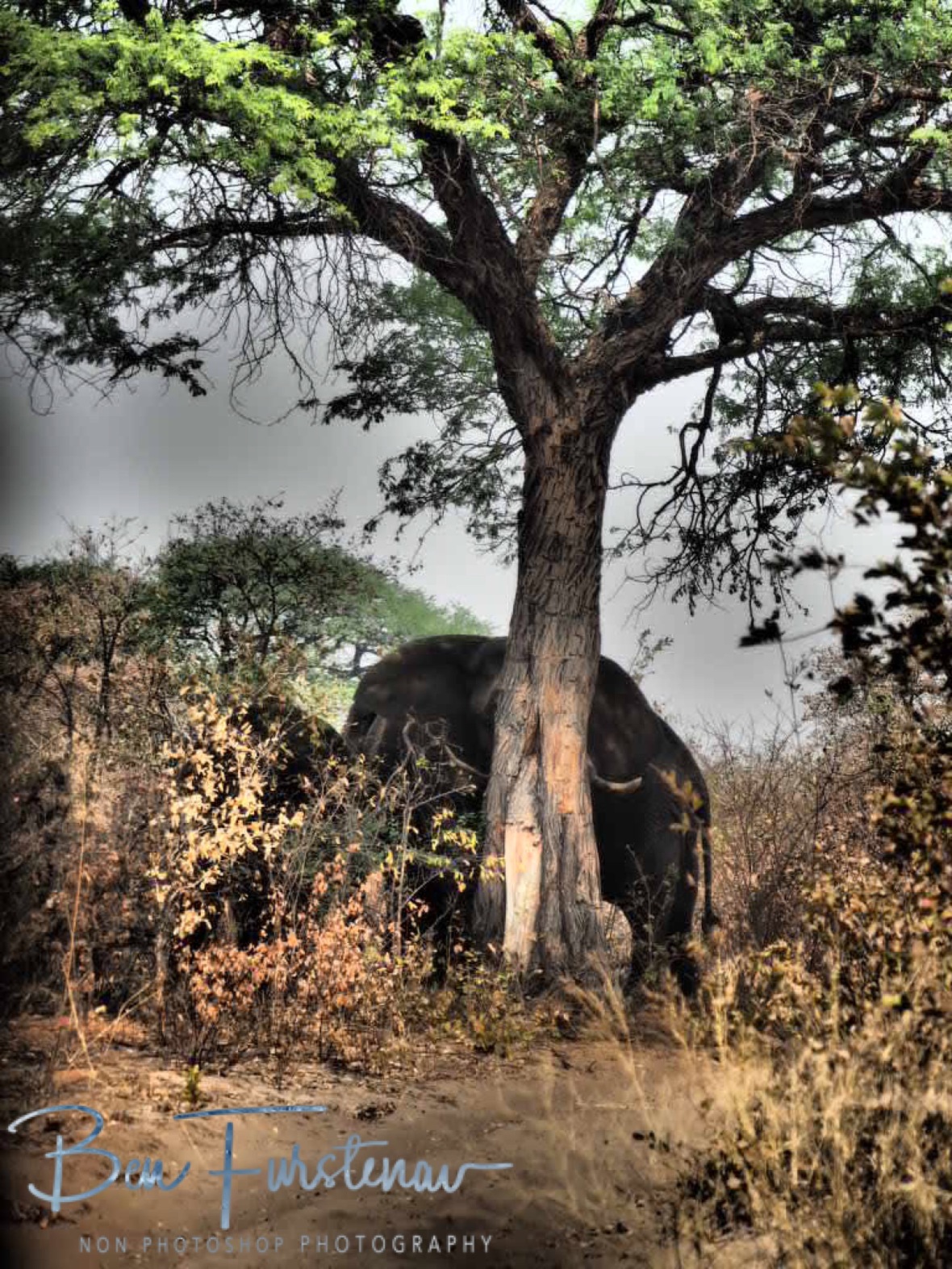 The third reason was elephants physically blocked tracks to pass. This small herd stood under a sheltering tree just before the campground. I was only a hundred meters away, yet still so far away. Realizing their need for shelter and acknowledging size and numbers, I reversed the uphill track to a slightly shady spot I could find. Even though it was steaming hot, a coffee goes never astray.  A good half an hour had passed when I tried my luck again. Nope, nothing moved, and nothing will move for a while. Same thing again, lucky I can entertain myself. But by 3 pm in the afternoon, it was scorching. Sometime later, I tried again. Third time lucky, I thought.

Yes, they moved. Only across the track to feed on some juicy leaves. Normally, they move on after a wee while but these ones didn’t. The bush was so thick, that I couldn’t take any photos either. I tried slowly to move a little bit forward, with the result of the big bull looking straight at me. Ooops! Ok, I wait. There was no shade this time. A little while later, one off the camp workers appeared on the track. He realized the emergency and shouted them off in the bush. Finally, this Kalahari standoff was over. The camp worker heard me come and go a few times and was wondering what was going on. Anyhoe, better late than never.

I went for a late afternoon drive before sunset. Maybe some predators are on the prowl. Instead, I saw these elephants scatter the horizon. Wow, I did not expect these many elephants here. Nervously they ran off at my arrival. I parked Zimba near the river bed and as soon as I turned the engine off, the elephants gained trust and returned to the scattered waterholes.

With fading lights, I just sat on Zimba’s bonnet and watch them peacefully. Just amazing.